A new platform for performance: is the future of entertainment in video gaming?

Entertainment in 2020 is set to look a whole lot different than we're accustomed to. With concerts cancelled and festivals postponed indefinitely due to the COVID-19 crisis, the future of physical music events is uncertain. But, even pre-pandemic, they were beginning to develop in the virtual realm in a variety of ways. Video game environments in particular present a revolutionary platform for accessible performance. Here, we share an essay on the subject from our May/June 2019 issue, Frame 128.

The concert is about to begin. The crowd gathers as the lights dim. Everyone is dressed in elaborate costumes. A panda shifts from foot to foot as a fish in a spacesuit break-dances with a sushi chef. Many wear white and carry speakers on sticks, while others spin giant pickaxes around their heads. As the music starts to play, millions of onlookers jump. Gravity changes in time with the beat, allowing people to project into the air, float and fly around the stage. Showers of particles fall from the sky like meteorites, and giant yellow beachballs rain down on the spectators, who swing wildly at the bright orbs, sending them spiralling up into the clouds. As the set finishes, the ground disappears, taking the stage with it, and everyone skydives into a suburban town hundreds of metres below. This strange set of events is not happening at an extreme-sports festival or even Burning Man, but within the new frontier of music venues: Fortnite, a video-game world.

At first, game environments – lacking physical materiality and possessing no acoustic performance beyond the simulation of sounds – may not appear to be natural hosts for concerts and music. Rather than focusing on static audiences, they typically promote participation in specific activities, such as shooting, racing, building and managing. Yet modern game worlds are complex interactive environments that bring thousands of people together worldwide and respond in real time to their behaviour. And many games do have an implicit link to music, from Wipeout’s techno soundtrack (1995) to Rez (2001) and Vib-Ribbon (1999) – realms structured by beats. And don’t forget Guitar Hero (2005), which turned living rooms into stages, and the Grand Theft Auto series (1997-2013), which has long featured radio stations curated by artists such as Iggy Pop, Soulwax and Flying Lotus. GTA recently moved into online performances, allowing players to buy virtual nightclubs that others can visit and to hire real-world DJs, such as Solomun and Tale of Us, to entertain guests. The DJs in turn have used Los Santos, GTA V’s deviant re-creation of Los Angeles, to record music videos and release new tracks, reaching a wide new audience through this virtual world. 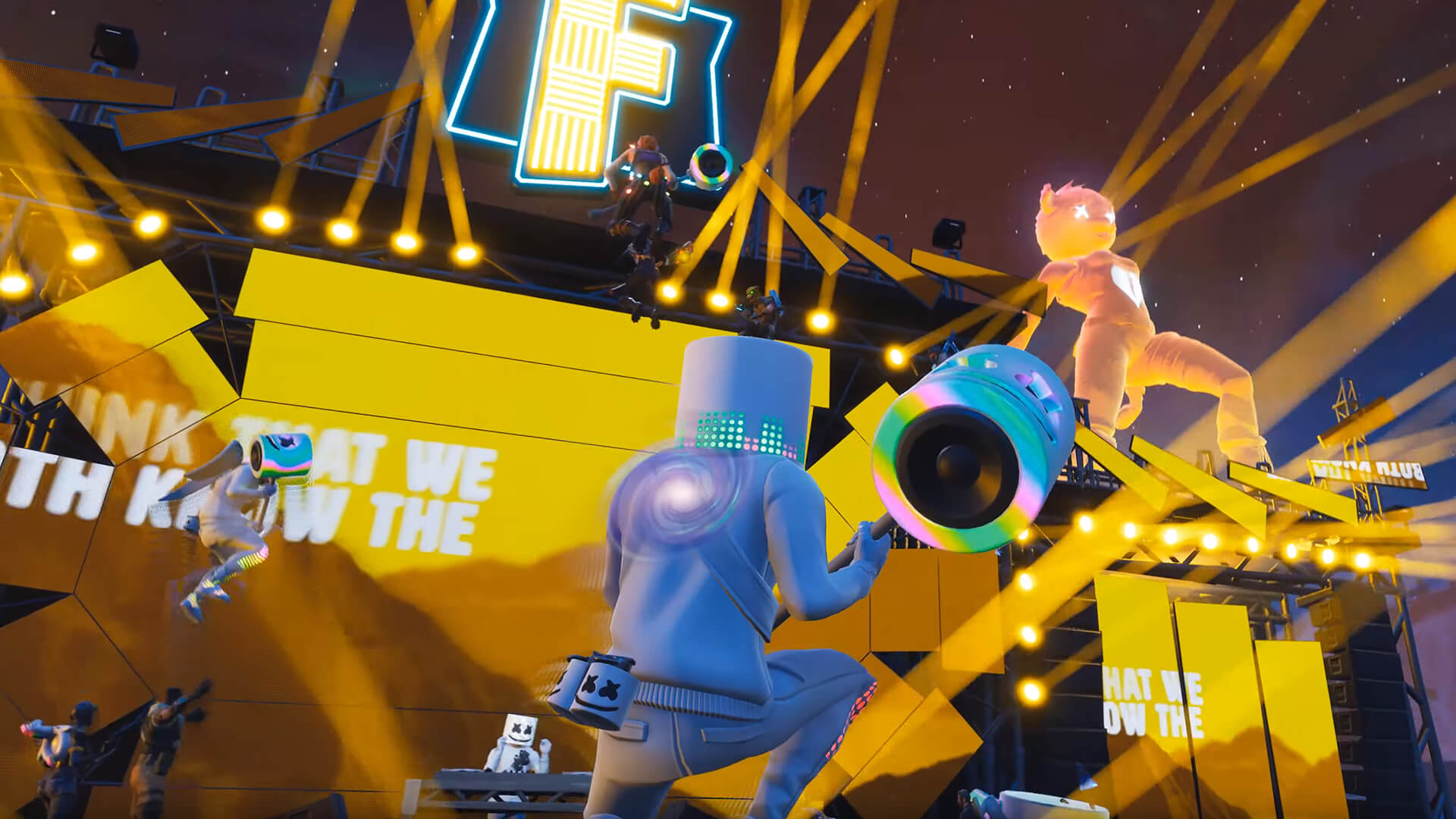 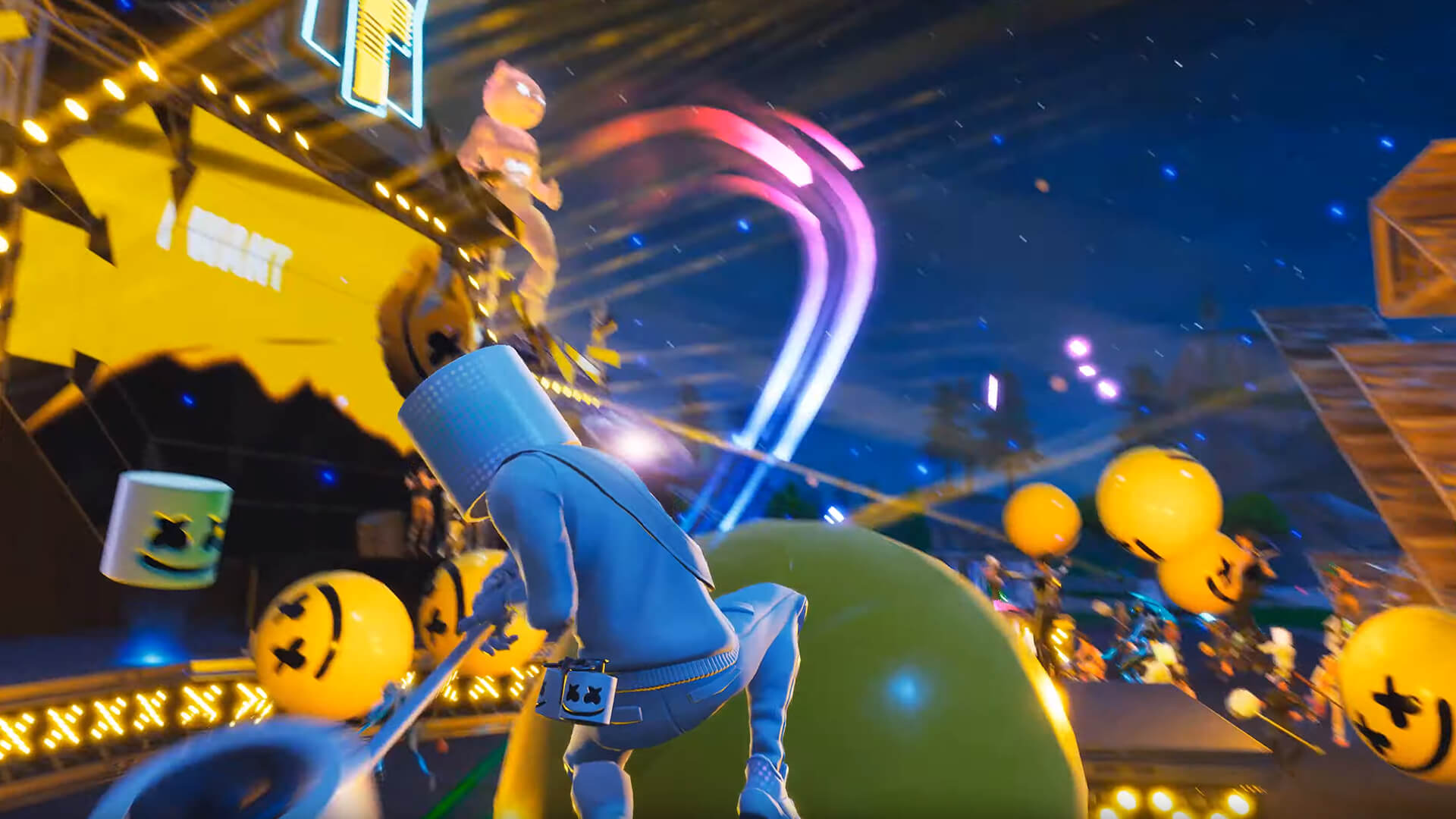 Taking the interplay even further, Riot Games, developer of the popular League of Legends (2009), a five-against-five hero battle game, came up with K/DA, a virtual pop group composed of game characters voiced by Korean K-pop stars and American YouTube singers. Their song, Pop/Stars, which launched the game’s 2018 World Championships, used augmented reality to bring the game characters to life. The song was designed to sell ‘skins’ – in-game costumes that players could buy – but it also rose high on the pop charts, showing an appetite for crossover experiences that combine music and game culture.

In February of this year, Epic Games, developers of game phenomenon Fortnite (2017), staged arguably the most ambitious live music performance in a virtual world to date. Fortnite Battle Royale invites 100 players to drop from the sky and fight to be the last person standing in an ever-shrinking level. Players can construct modular structures with which to access new areas or hide from enemies. The best players are good at both shooting and building. The game is tied to music culture through in-game dances that encourage players to ‘emote’ to others. Most of the dances reference popular culture: examples are Snoop Dogg, Irish jigging, Seinfeld and Scrubs. Fortnite dances have become iconic; various footballers at the 2018 FIFA World Cup performed them in celebration, including Frenchman Antoine Griezmann in the tournament final.

The integration of music and dance continued with the announcement that US-based DJ Marshmello was to hold a live in-game concert – to be broadcast across Fortnite’s servers, reaching millions of players. When the event arrived, however, the venue seemed somewhat unremarkable, typical of stages erected in parks every summer and nothing like, say, one of Mark Fisher’s famously exuberant set designs. But this was a video-game world, and games regularly play with space in weird ways. As the concert date approached, players built floating structures to gain a better view and practised their dance moves. When Marshmello appeared, they found themselves in a ten-minute-long performance that comprised stage, crowd and the world itself. The intensity of the virtual space steadily grew along with breaks and rises in the music. The world performed in tandem with the DJ – all made possible by game technologies that excel at incorporating different types of information into one environment.

A game like Fortnite is a layered space of programmed logics, art, 3D-modelled architecture, written narratives and interface design. Sound sources must be positioned and physics simulated. Objects are assigned ‘colliders’, invisible boundaries that prevent the player from falling out of the world. Epic and Marshmello manipulated each element in real time for over 10 million people at once. The implication is a form of all-encompassing spatial performance that festivals of the future could embrace. Such responsive, layered, virtual environments would have a huge reach, provided the digital infrastructure, which many games already have, is in place. Fortnite’s recent launch of an island dedicated to American rock band Weezer suggests music will continue to be part of the game’s development. 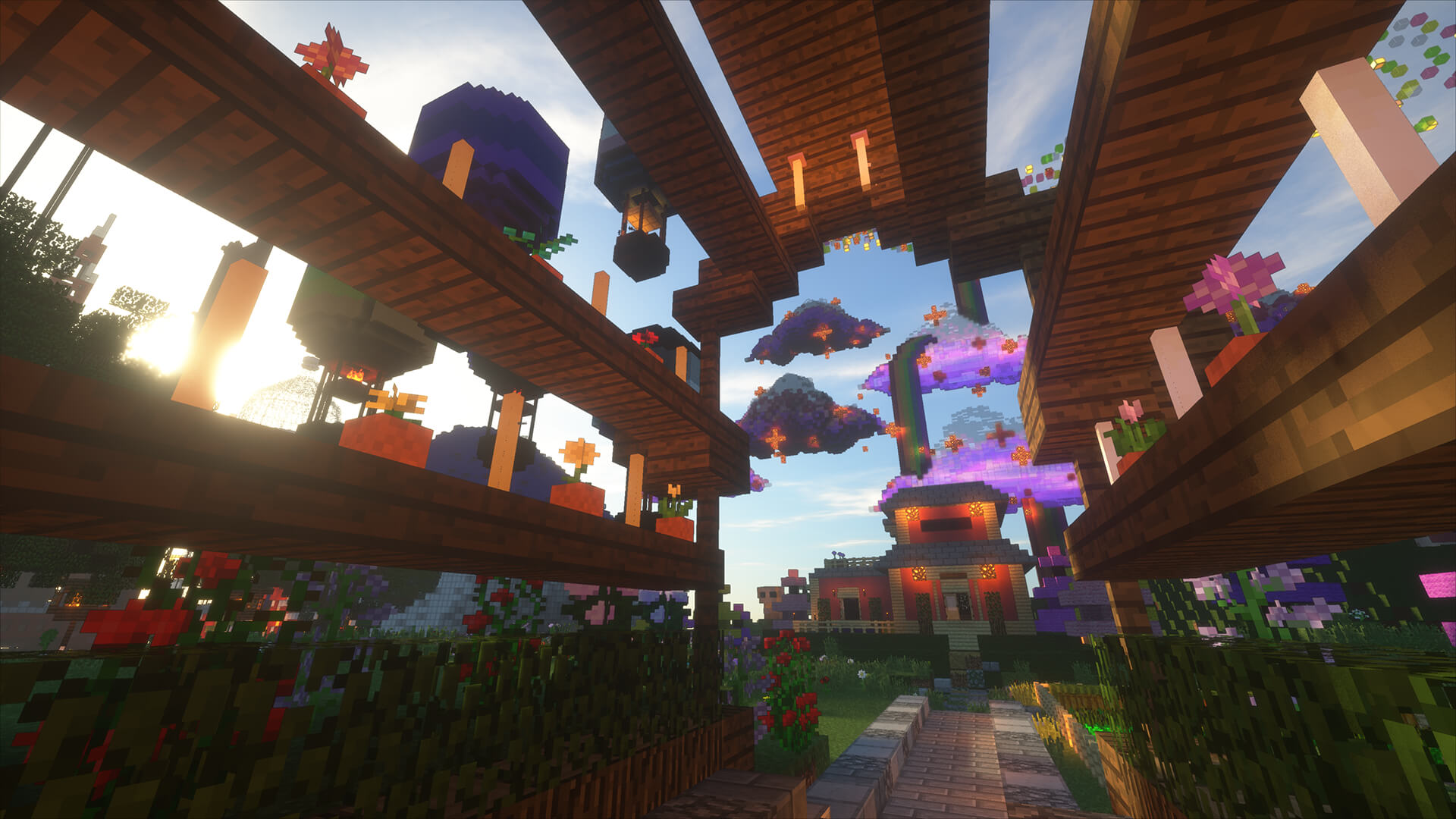 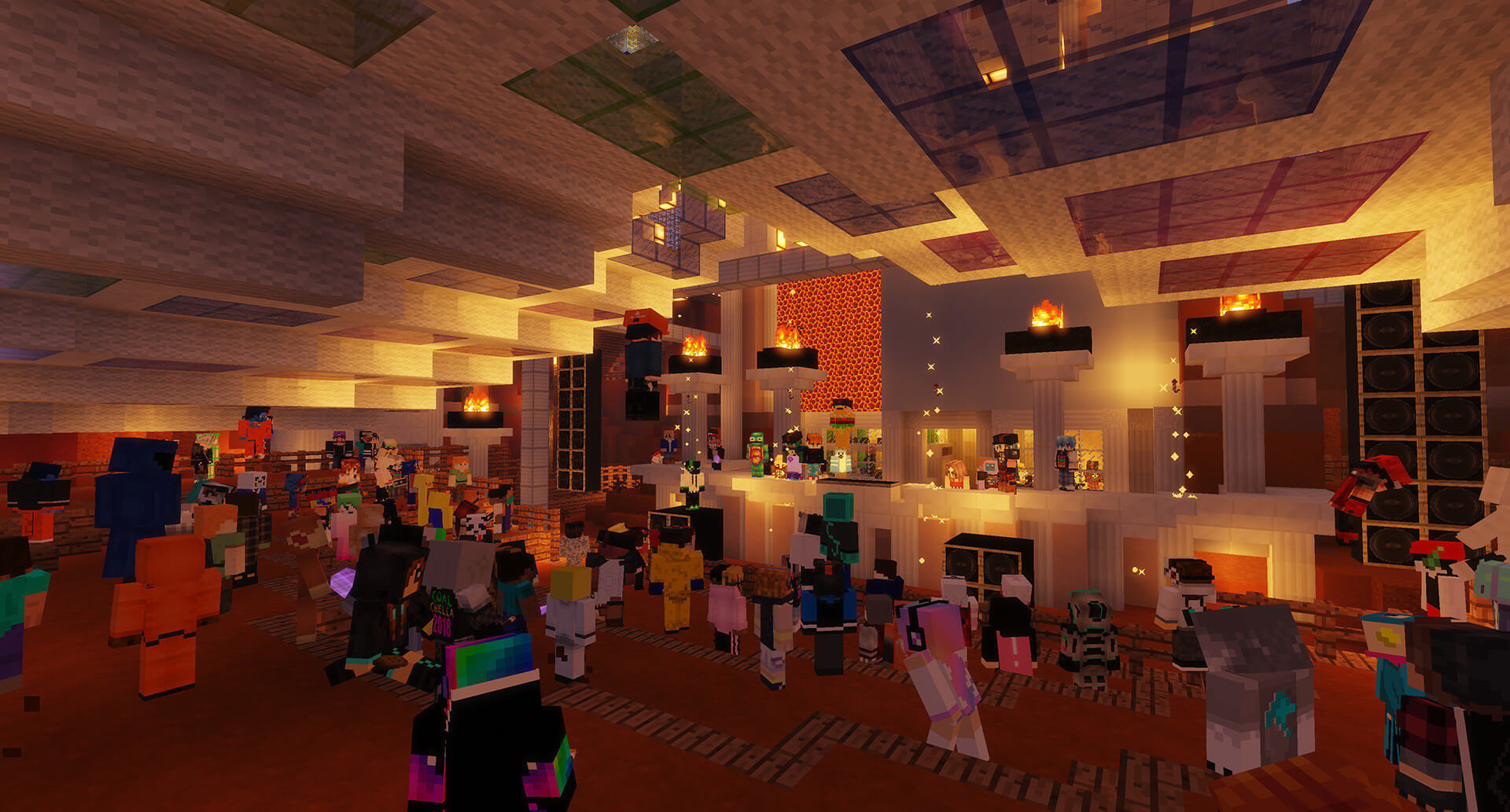 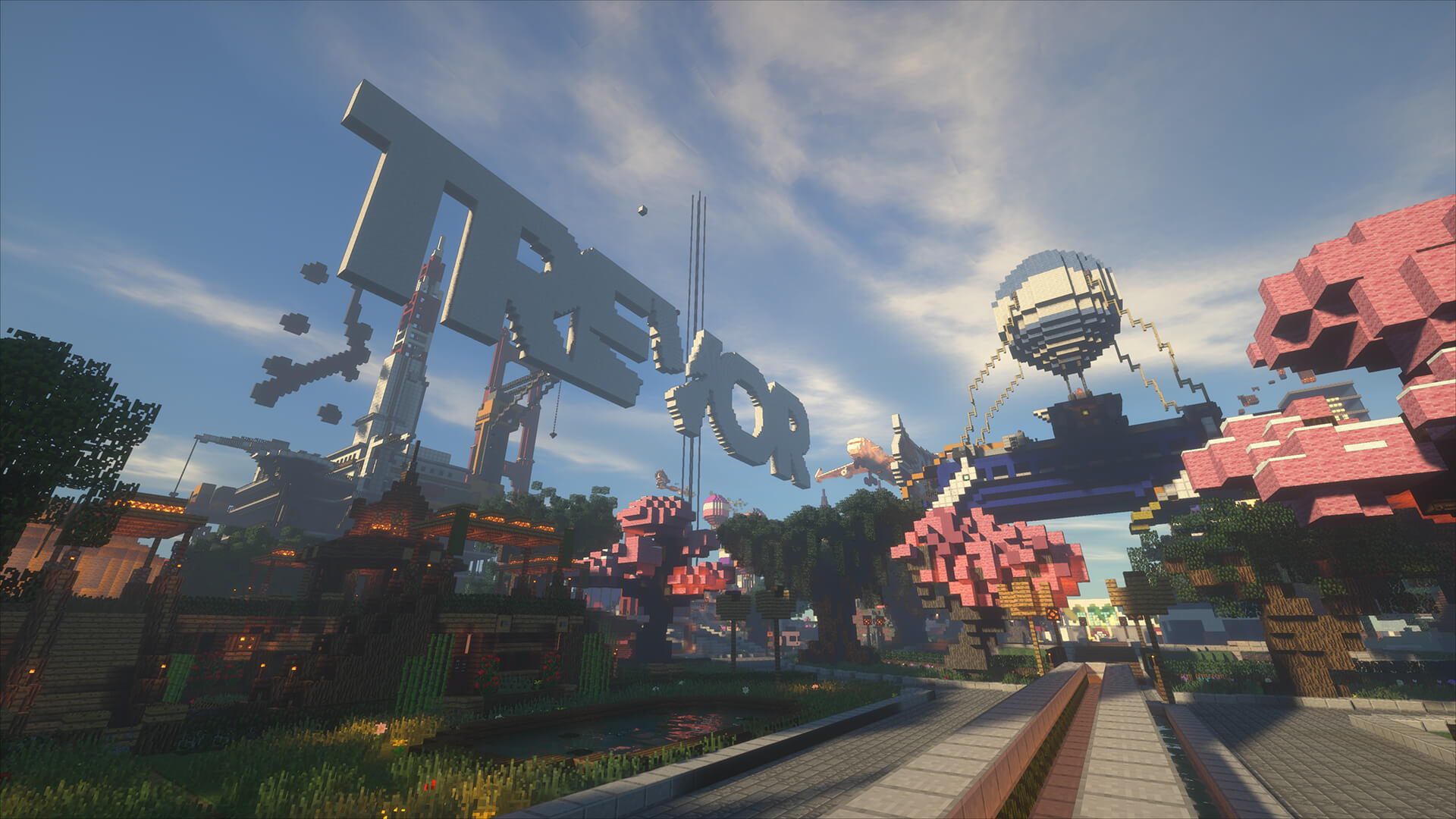 Coalchella – a 2018 music festival held within Minecraft – proved so successful that the game’s servers initially struggled to keep up with visitor numbers.

Performances in games and virtual spaces have been around for some time. In 2006, American singer Suzanne Vega released her album with a live concert in Second Life, an online world that has hosted many such performances. Duran Duran Universe, the British band’s private island within this world, features a lipstick-shaped skyscraper and a cinema for the group’s music videos. Second Life was a particularly suitable host, given its user-driven attributes. As a sandbox environment, a free-roaming world with few restrictions, it lets players add self-built 3D models, code and design events as desired. In a more contemporary context, the DIY spirit is best embodied by Minecraft. The building-block game has become a piece of design software in its own right, forged by the creativity of over 90 million regular players. Unsurprisingly, some of the largest and most experimental virtual music events have taken place on this platform, many lasting longer than ten minutes.

The largest Minecraft-based music event to date was Fire Festival, which was held over two days in January. The team behind it – Max Schramp among them – was also responsible for last year’s Coalchella festival. Fire included British producers Hudson Mohawke (who scored the game Watch Dogs 2) and A.G. Cook. As Schramp explains, the idea of a virtual music venue ‘started last May, when I decided to have my 21st birthday party in Minecraft’. As Schramp and his friends partied in a custom-built mansion, other events took place that demonstrated the game’s potential for gatherings. ‘People had run off into the desert during the party, built an underground club and started their own show,’ he recalls. At Fire, rather than having the public shape the world, a 20-strong team of builders was given carte blanche to experiment on the environment, along with artists appearing at the festival. Performers built their own houses in a postmodern landscape full of references to pop culture and corporate branding. For Schramp, the hyperreal environment reflected the festival’s collaborative ethos, which he describes as a ‘huge collage’ composed of ‘visual artists, people who play Minecraft and musicians’. As with most video-game spaces, Fire used peaks and dips in intensity to keep visitors engaged during two seven-hour-long days of music.

Although virtual worlds can incorporate many experiential layers into a performance, the stage retains an important role

Interestingly, although virtual worlds can incorporate many experiential layers into a performance, Schramp argues that the stage retains an important role. Because ‘this crazy world doesn’t have gravity’, he says, it’s helpful to have ‘one real anchor point that you actually see to help with the immersion’. Of course, there are over two millennia of embedded cultural history in theatres and stages, and for the Fire team they still play an important role in creating the sense of being at a festival and distinguishing the performer from the blocky crowds dancing below – even if the stage is on a floating volcano, suspended over a mile-wide pool of lava.

Perhaps what most surprised Schramp and his team was that although Minecraft is the ‘platform we know best’ for realizing such ambitious events, the audience consisted of more than ‘just gamers’. Players were more likely to be ‘fans of electronic music and of music in general. That’s something we didn’t really expect.’ One reason for the broad span of players lies in Minecraft’s extreme accessibility. Likewise, Fortnite is a free-to-play showcase for Epic’s Unreal game engine software, which along with that of rival Unity is being increasingly adopted by architects and designers who employ VR. The result is a near convergence of game design and architecture. The architectural potential of these worlds is far the richer, involving as it does the full audiovisual and interactive spectrum. If Schramp and Epic have their way, the future of music performance will be embedded in worlds where buildings dance, weather responds to musical pitch and time is remixed.