There were no tell-tale INTERNI banners outside of Via Edmondo de Amicis 19, a nondescript apartment building in the burgeoning Carrobbio neighbourhood, located between Tortona and 5Vie. No special signs on the doorbell on the 10th floor, which houses the office of PR agency Strategic Footprints. The doorman in the lobby would offer a succinct, ‘If you’re here for the Salone thing, hit 10 on the lift, first door once you’re out, and they’ll tell you what to do.’

If you didn’t venture out to follow those steps in this scavenger hunt, like many curious and puzzled people did, you surely missed one of the most charming, touching and downright pleasing exhibitions in Fuorisalone: Land, Masquespacio’s tribute to the contemporary beauty of the humble terracotta. 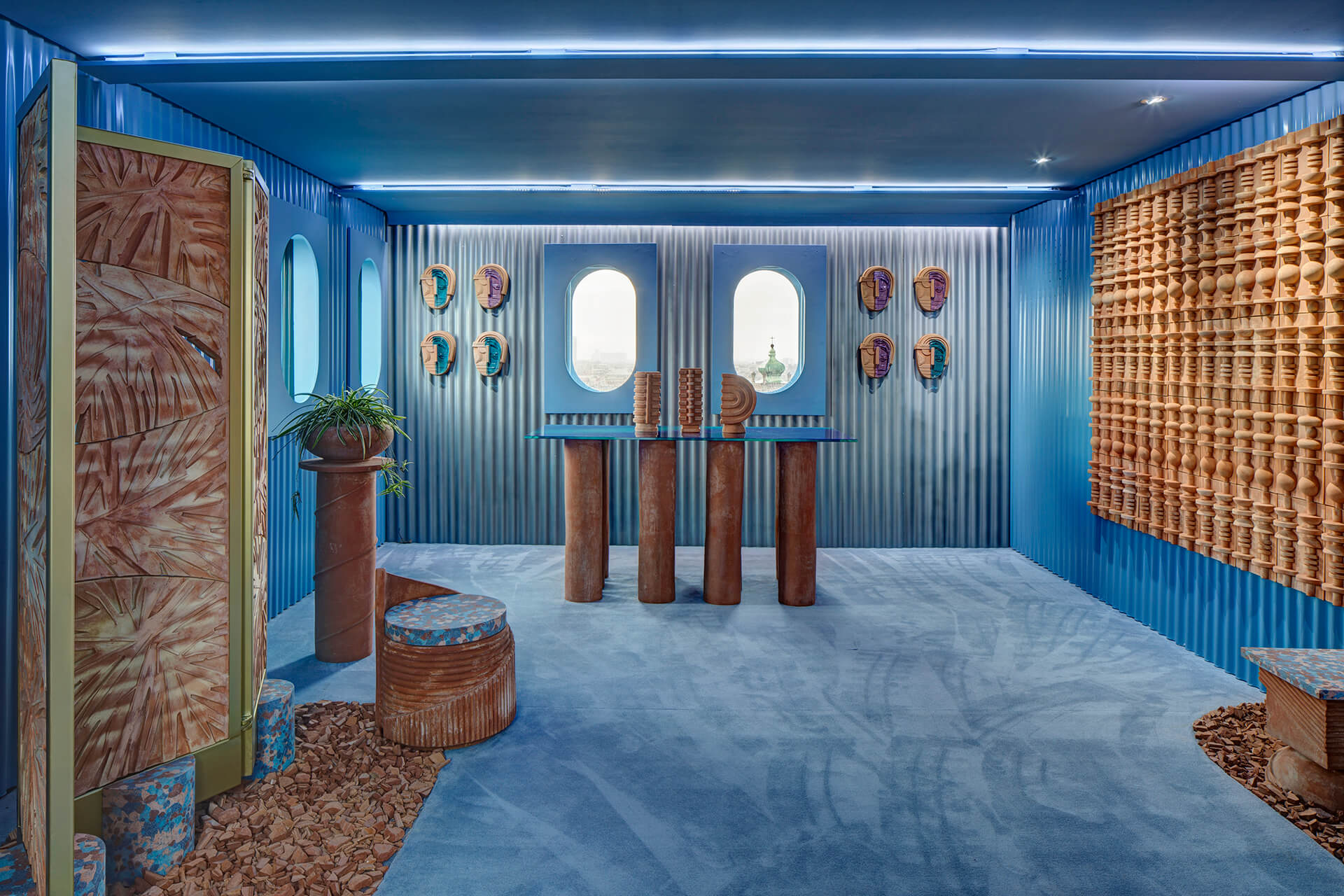 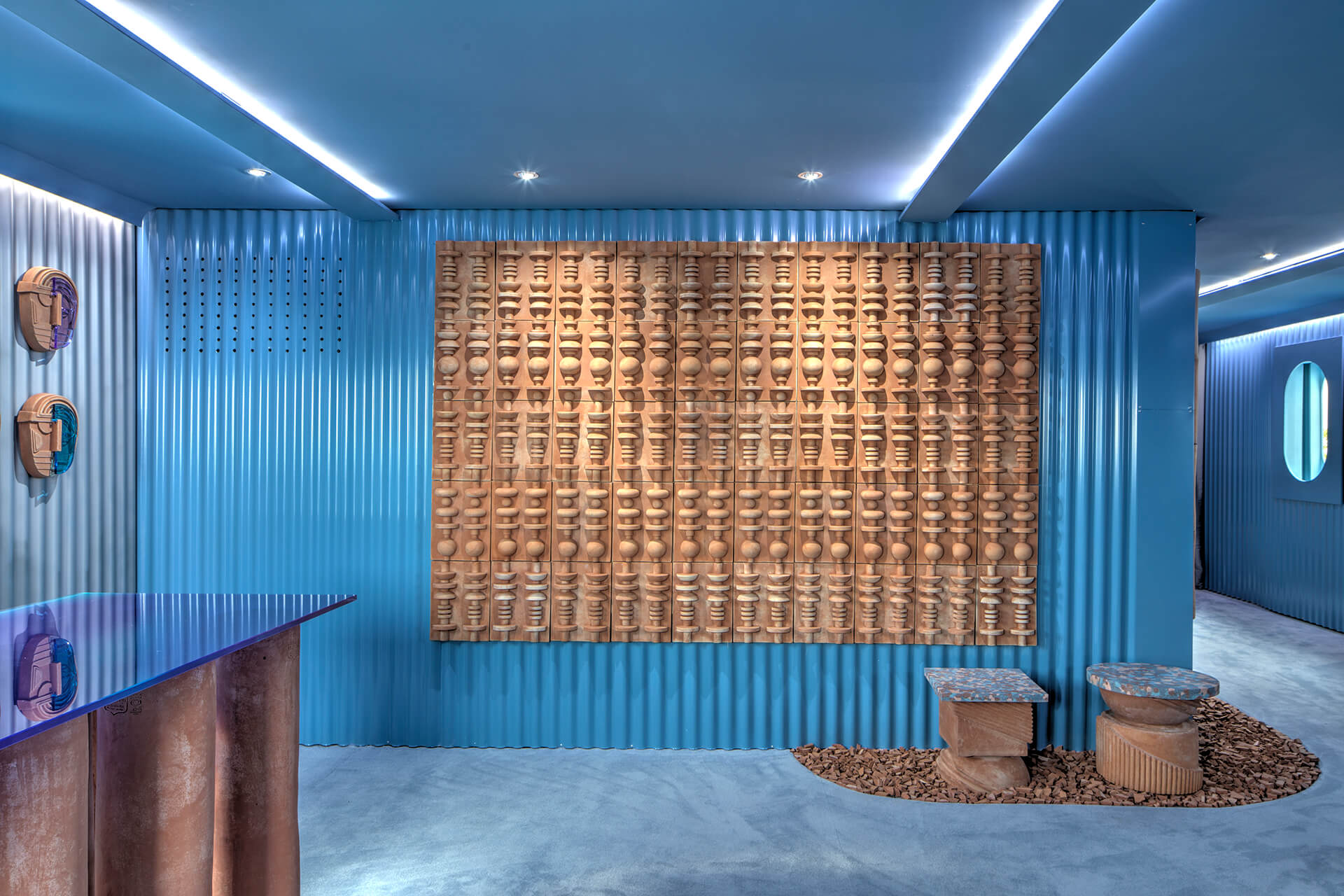 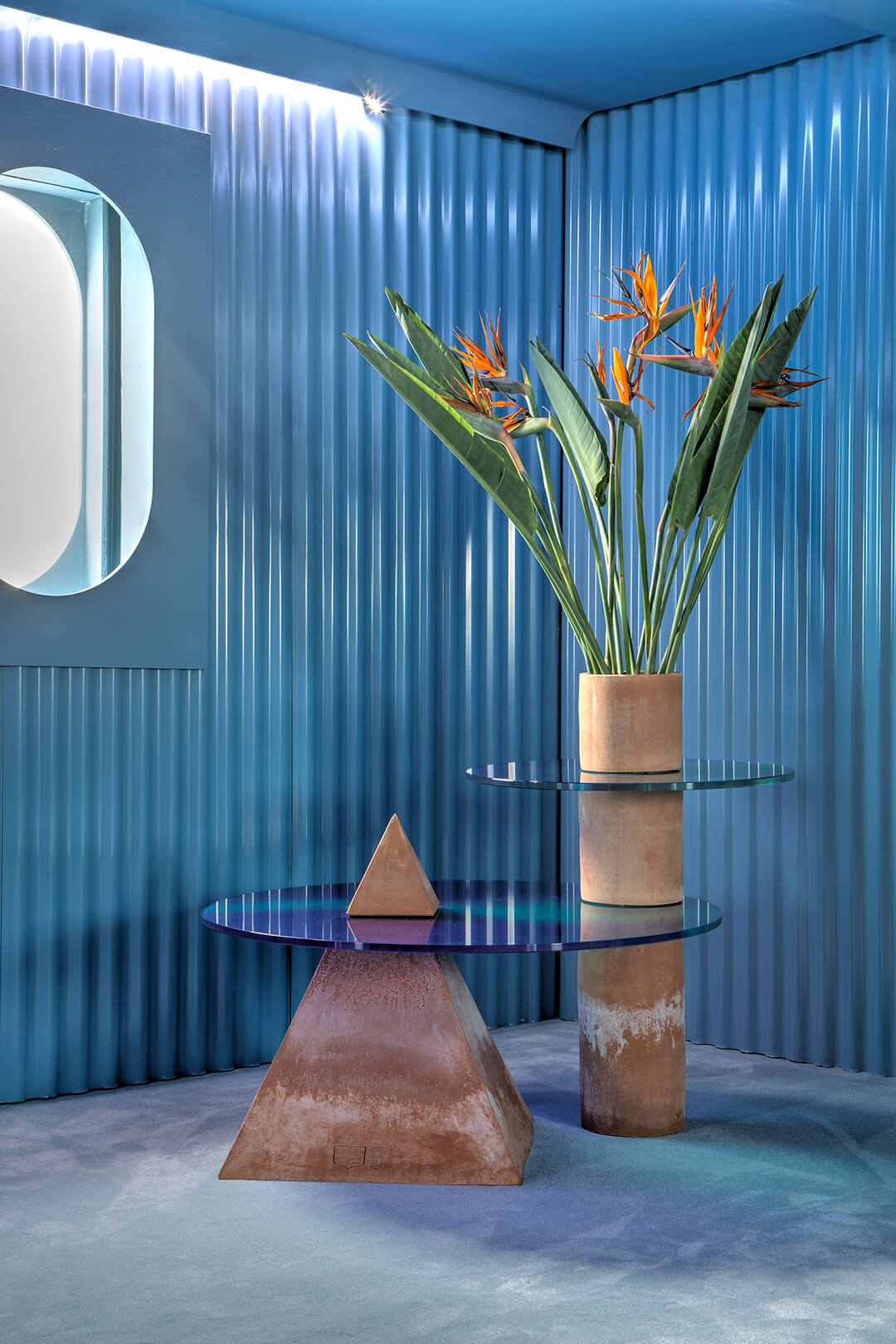 Their client, Impruneta-based manufacturer Poggi Ugo, turns 100 this year. Known worldwide for its high-quality production of mostly outdoor clay pieces, the company saw this landmark anniversary as an opportunity to celebrate the underrated beauty and future potential of… well, land. ‘We wanted to look ahead and anticipate the lines and shapes that best represented the taste of tomorrow,’ explained fourth-generation CEO Lorenzo Andrei.

So, along with curator Valentina Guidi Ottobri – she of Luisaviaroma fame – they welcomed 19 new decidedly contemporary pieces into their catalogue. The standouts are Mask, a flat, Mayan-like visage with embedded tinted crystal; Skyscrapers, a set of table vases that brings the 3D-render aesthetic over to the more earthy side, and the improbably stout-yet-floating Eternal, a Componibili-like modular library. The pieces by themselves were a revelation, proving how a traditional material could learn new tricks – and in a Fuorisalone edition massively populated by blobby pieces that came out of filament printers, the presence of that familiar orange surface brought along a much welcomed infusion of warmth. 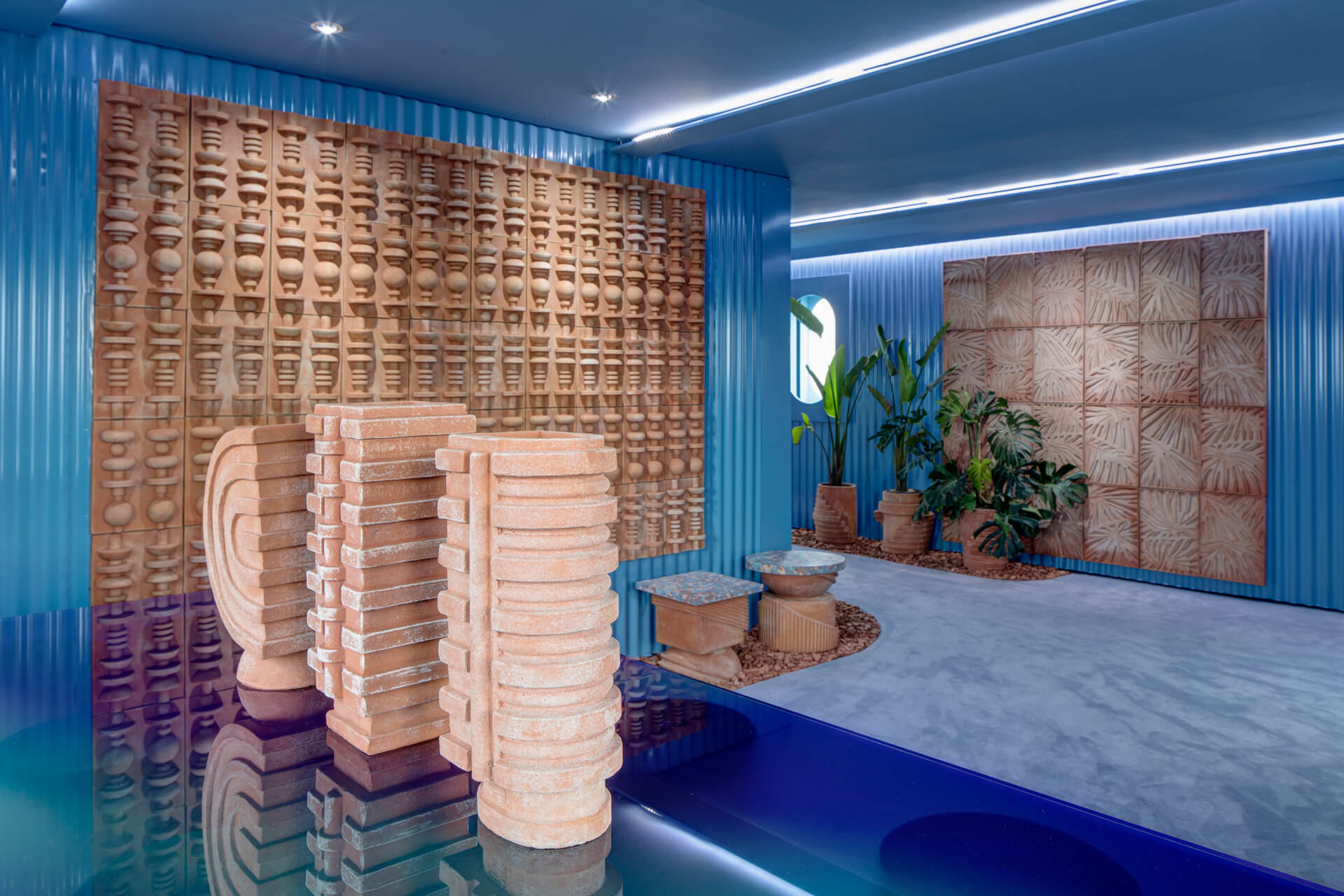 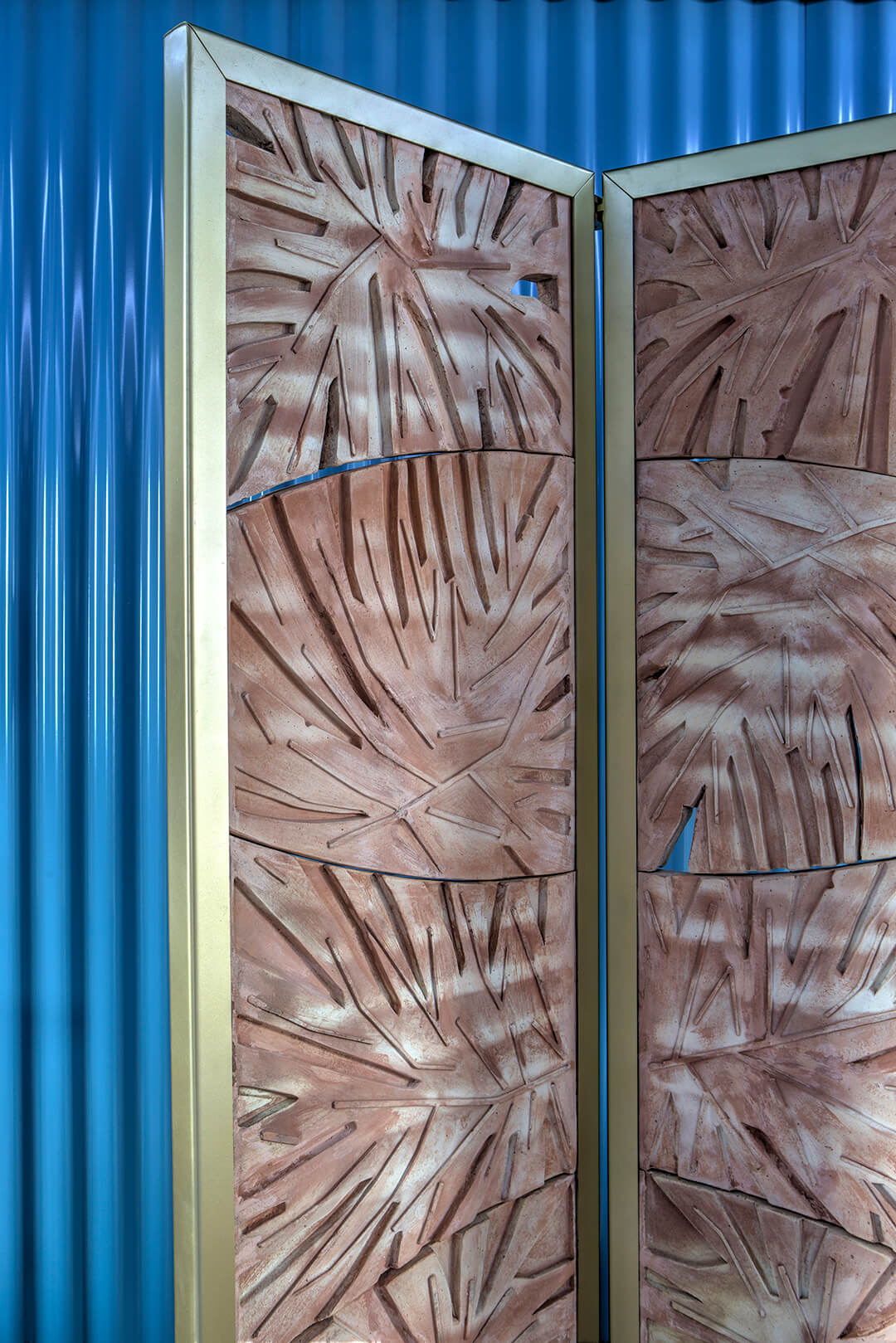 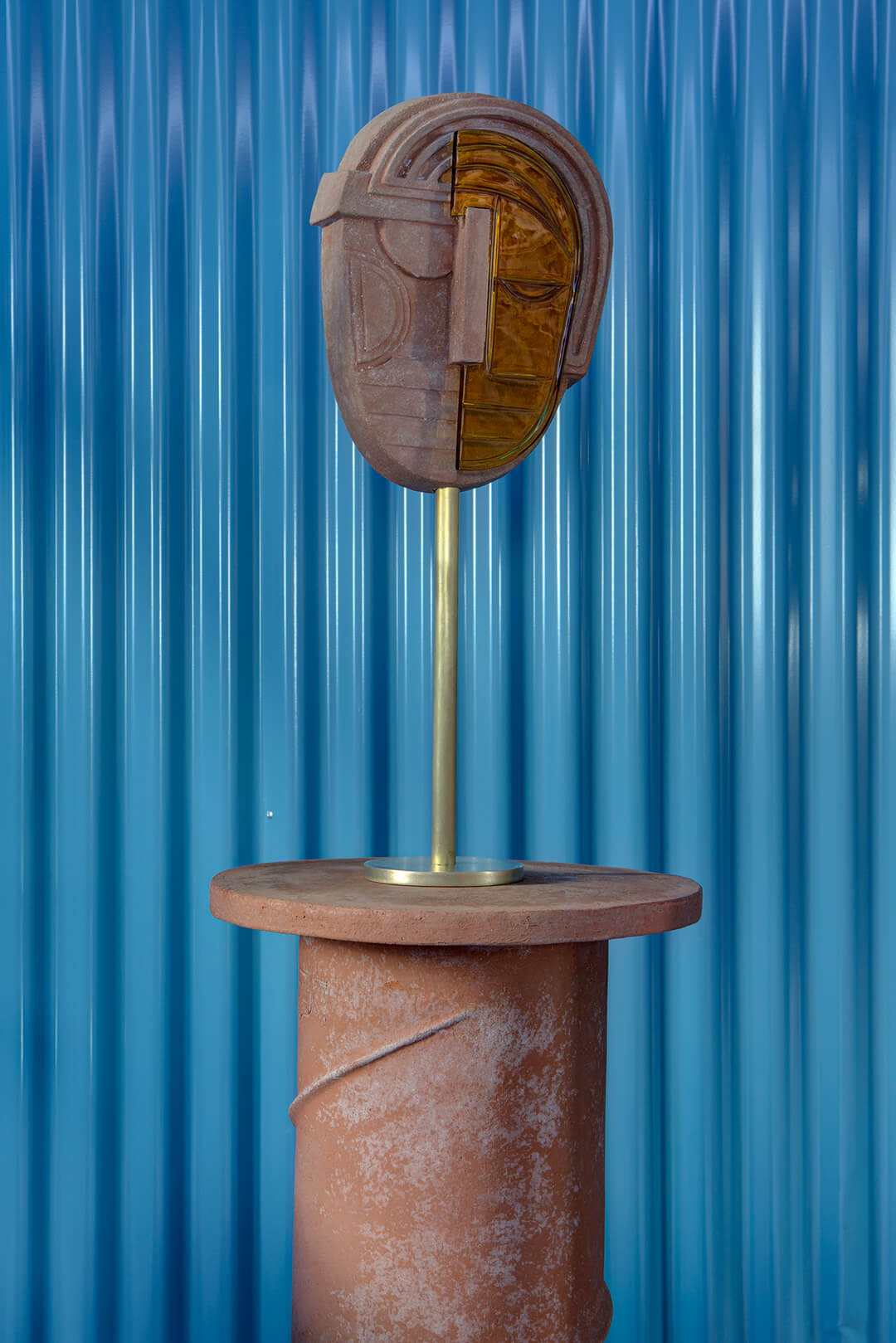 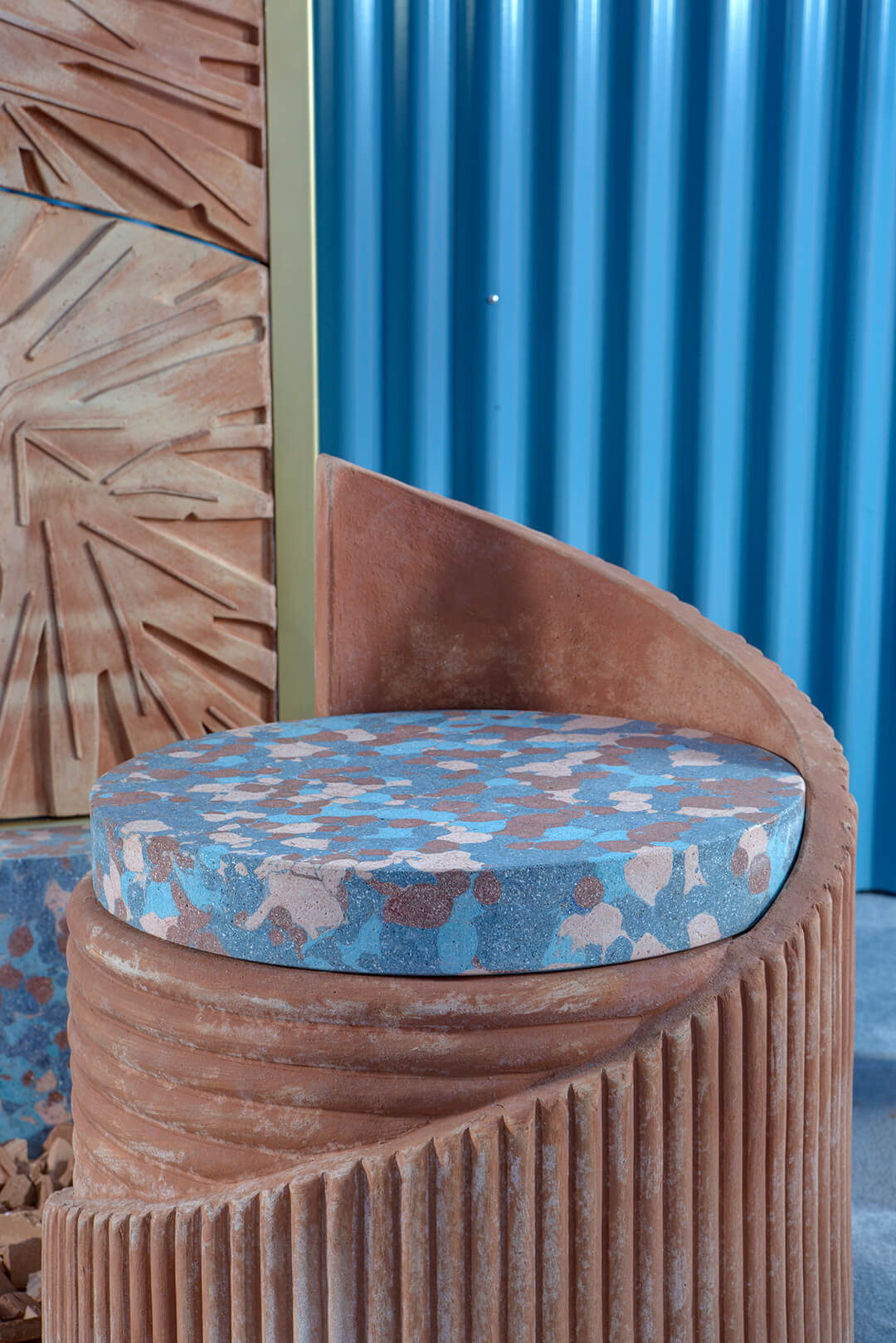 But why did Land work so well? Because as you hit 10 on the lift and knocked on the first door once you were out, you were personally guided to the building’s rooftop, where the impossible took place: busy buzzy Milan during Salone turned into the calmest, emptiest of places – that location then made complete sense, away from the usual design districts. And that was even before reaching the main course, Masquespacio’s site-specific installation. ‘We sent the brief to five different design studios, and they [Ana Milena Hernández and Christophe Penasse] stood out immediately, because they truly envisioned the fresh and surprising approach we were looking for,’ said Andrei. ‘This... this is something else.’

Spatial design is always the sum of its contextual parts

He was right: What was it about that small cabin that worked so well? Was it the vibrant but calming shade of blue? Was it the loving insertion of the Milanese skyline into the environment, by way of carefully positioned oval windows? Was it the joyful combination of curved textures on cold metal and straight angles on hot stone? It was all of that. Every Land visitor I spoke with remembers being inexplicably overcome by joy and calm and mellowness and a renewed love for the Italian soil and the crafty dedication of its inhabitants. Spatial design, as we know quite well here at Frame, is always the sum of its contextual parts.

As I left the rooftop – against my will, as I would have happily stayed there for hours – I saw Andrei beaming. Maybe it was the undeniable psychological effect of the space. Or maybe it was the reassurance of knowing that, by way of chutzpah and intuition, an unexpected player such as Poggi Ugo had managed to surprise and emotionally connect with people in the most competitive design battlefield of all.