How should designers respond to the coming age of robots? By placing them in a context of human warmth and nostalgia, says Germany’s Studio Aisslinger.

For Apotheke, a new premium pharmacy in Berlin’s Schultheiss neighbourhood, the studio’s designers imagine the future while revisiting the past, by combining cutting-edge technology with a familiar, Eames-inspired aesthetic.The 250-m2 interior showcases a robot arm that moves speedily along the shelves, selecting and delivering medicines efficiently and precisely (reassuringly, its picks are checked by a human pharmacist prior to sale).

‘The technology is actually quite common; many pharmacies have it,’ said Studio Aisslinger’s Monika Losos, ‘but usually it’s hidden in the stock area, as though it had nothing to do with us humans. Yet technology now permeates our whole existence. We should accept that and find ways to coexist with robots, instead of glamorizing or condemning them. This is why we reveal technology that’s usually hidden, putting it out in the open, into the heart of what happens in a pharmacy.’ 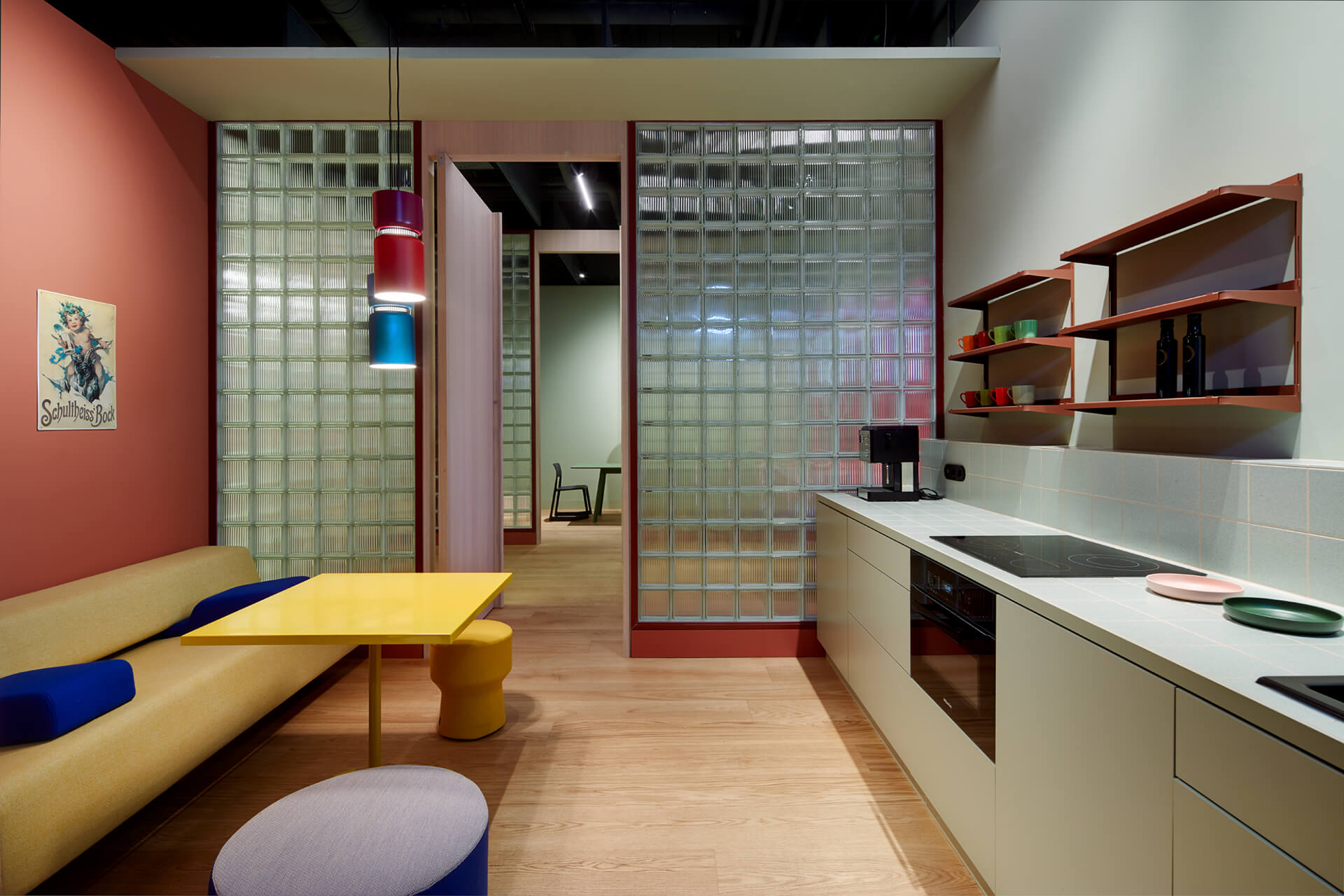 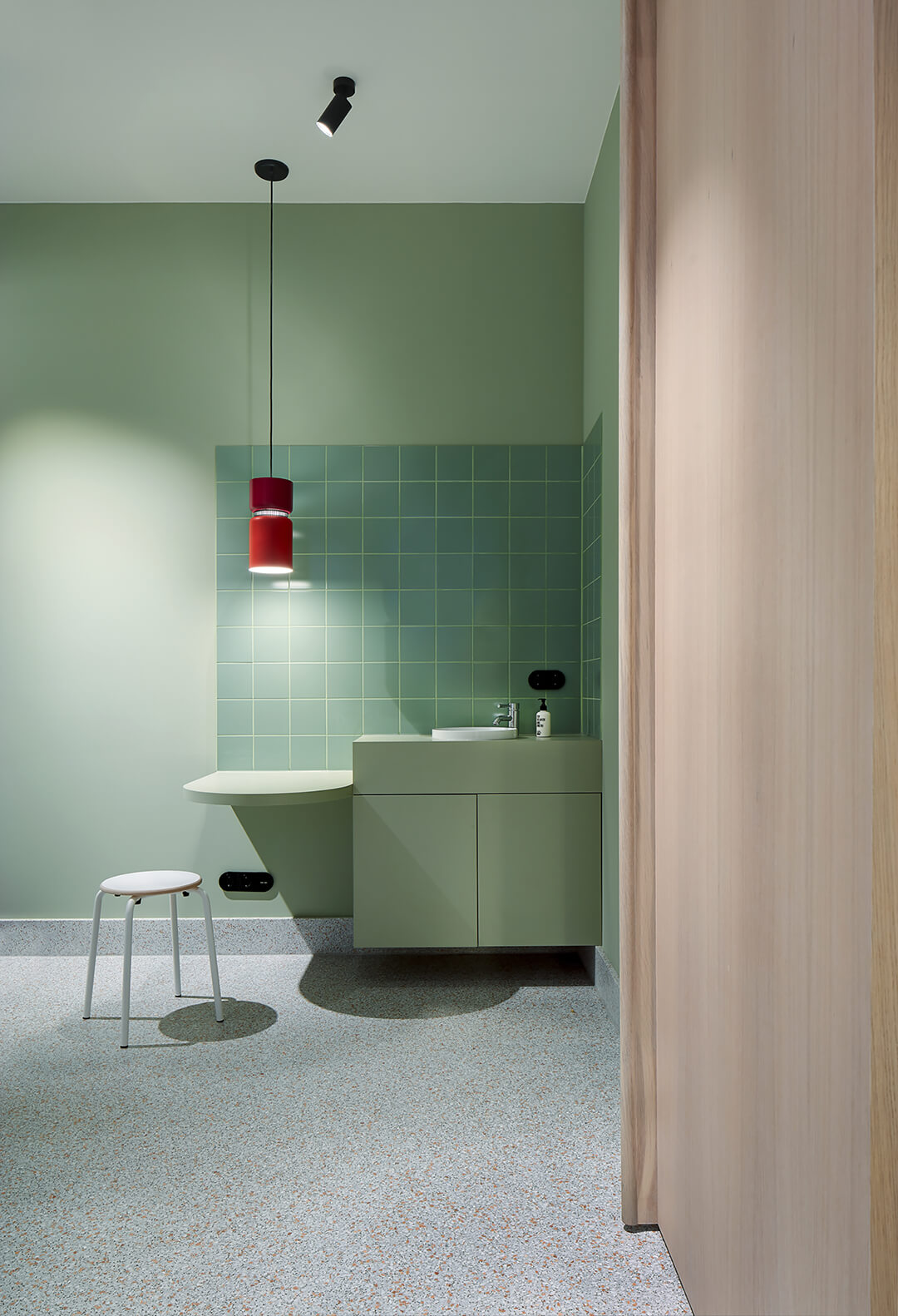 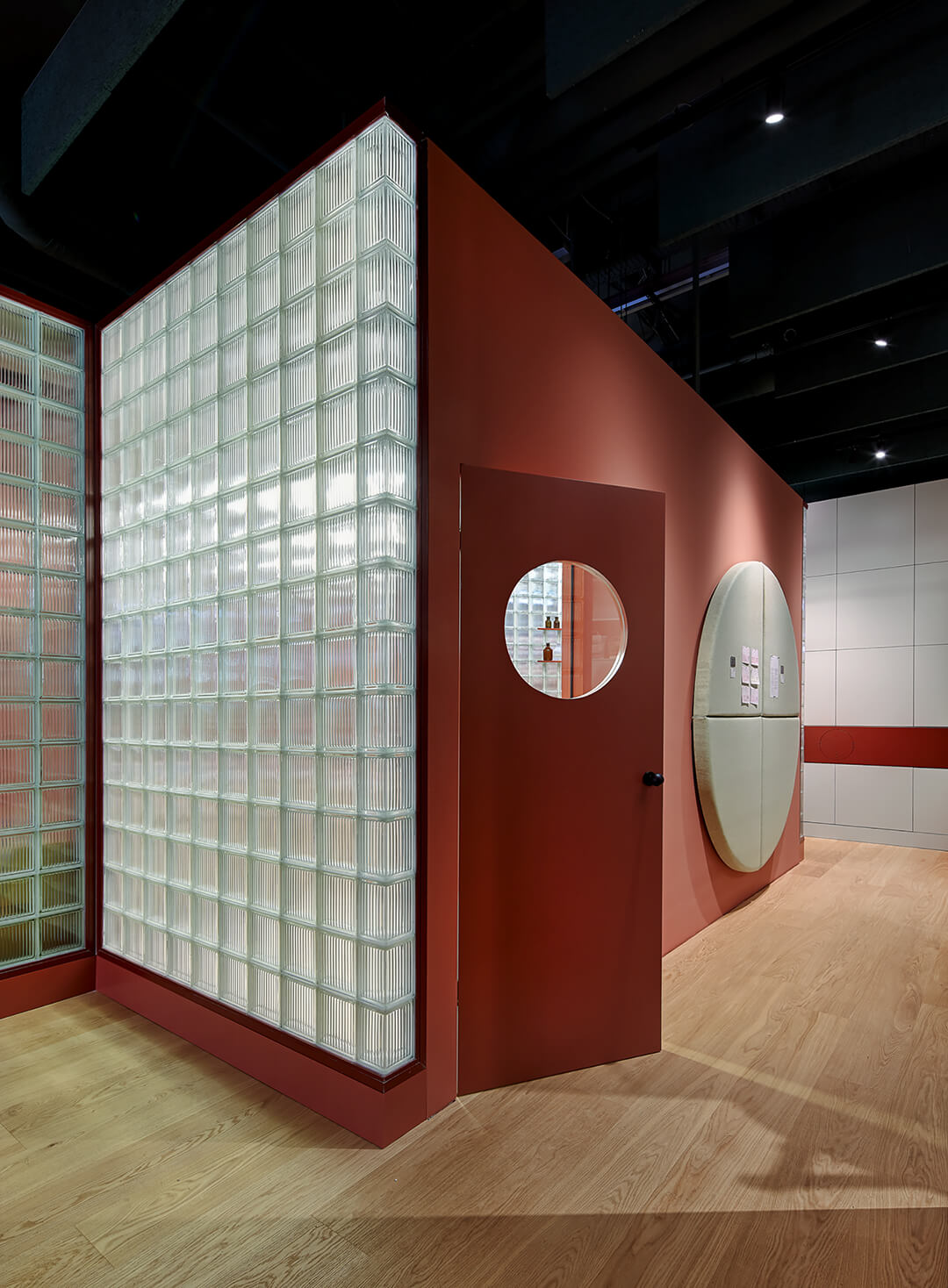 In doing so, the designers encountered some resistance – not from the client, but from technologists. ‘It was difficult to convince the robot supplier to open up the claddings and make them glazed,’ explained Losos. ‘The engineers apparently don’t want anybody to see the heart of the machine.’ After a lot of talking, they were convinced, but for Losos the initial hesitation revealed ‘how difficult it is to really change our understanding of, and our attitude towards, this kind of technology and its role in daily life’. She said the challenge was to get ‘beyond the boundaries of the classic pharmacy layout. We didn’t want to create just another white background for the products, but an inviting space that would facilitate face-to-face communication and personal interaction.’

We wanted to rediscover the apothecary as a unique analogue experience

The solution was to combine technology with a deeply human atmosphere and tactility. ‘We wanted to rediscover the apothecary as a unique analogue experience,’ said Losos. Mid-century modern is an unexpected aesthetic for a pharmacy. It adds warmth and a nostalgic feeling through the use of wood, glass, and an organic palette of natural browns, greens and creams. 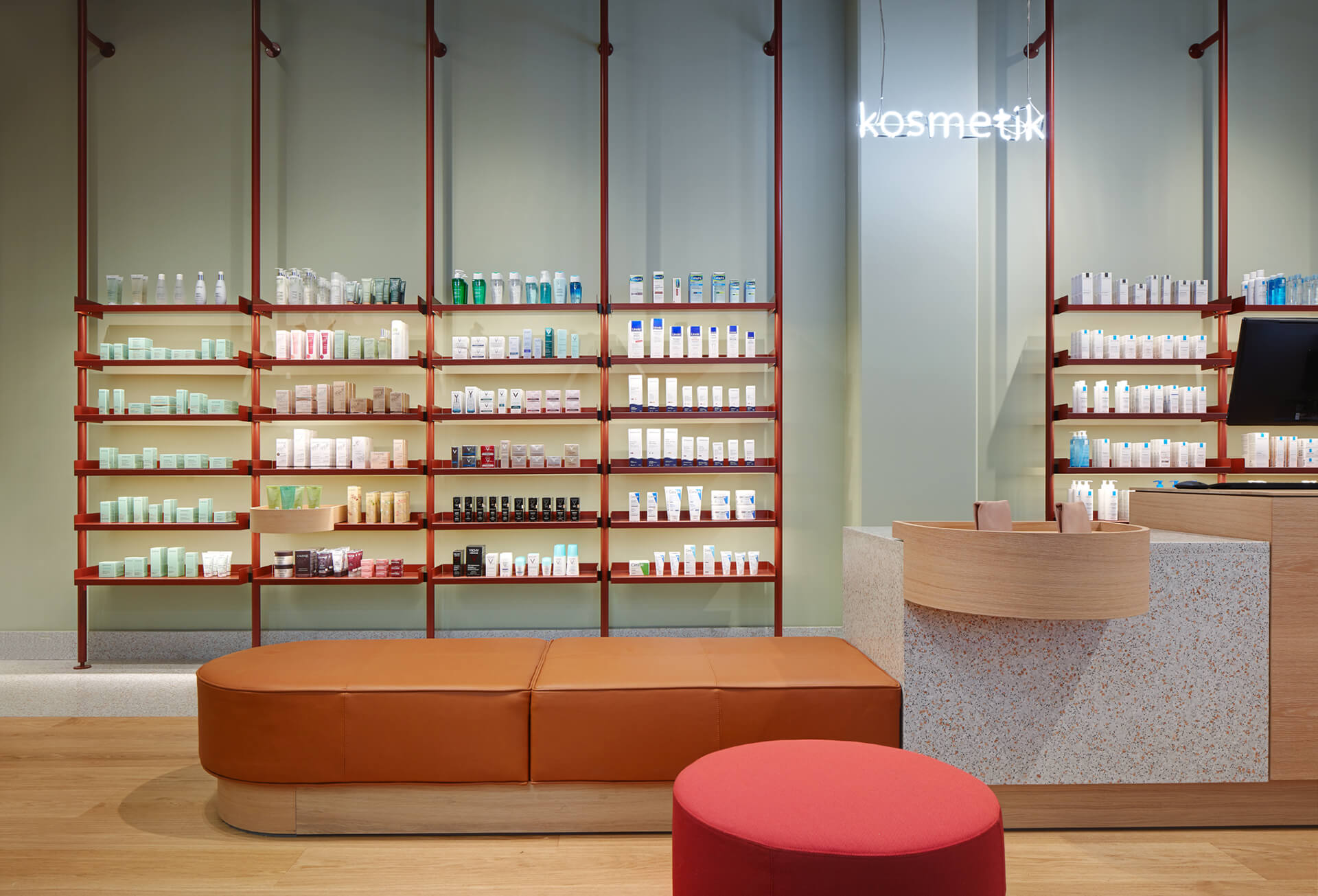 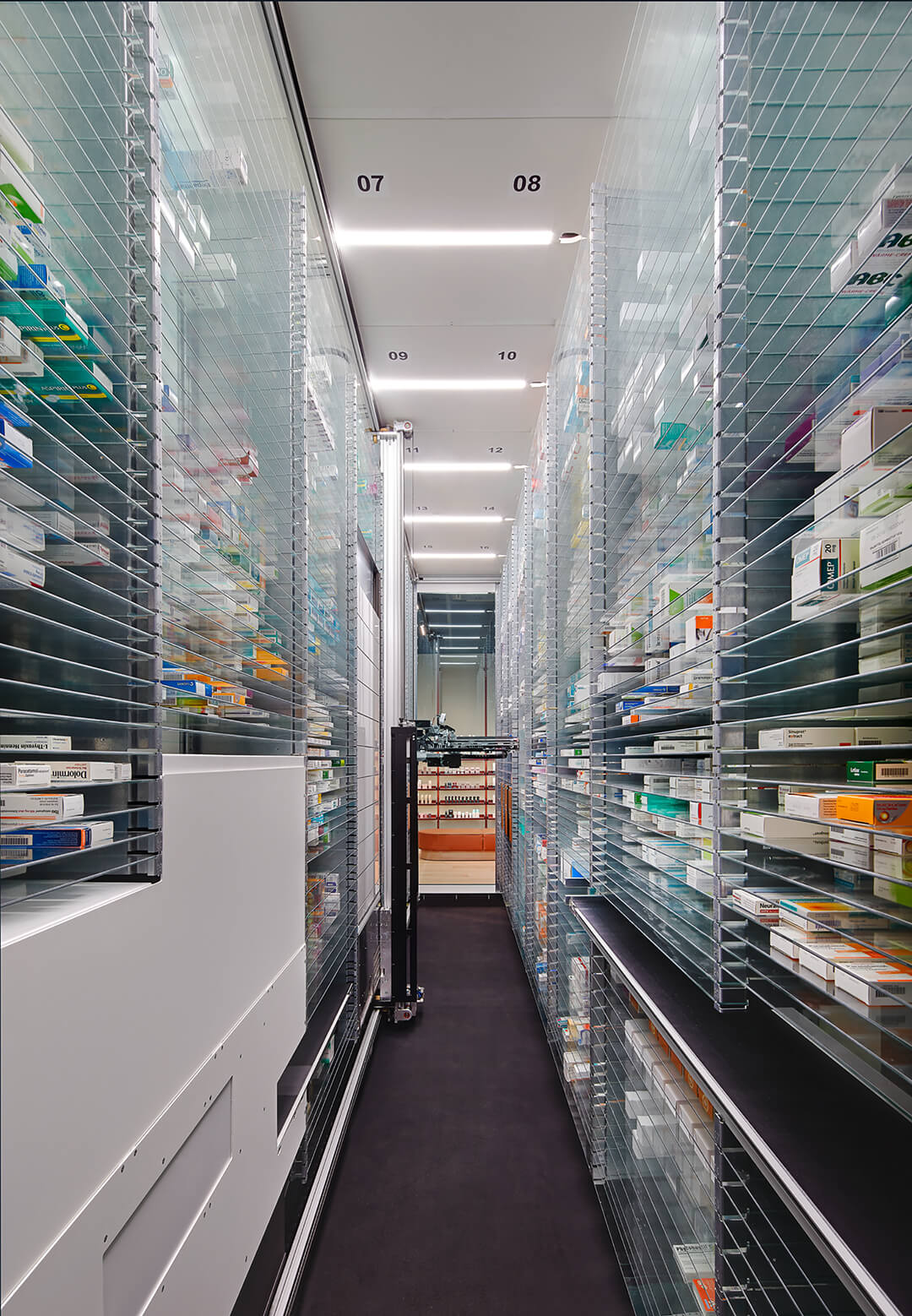 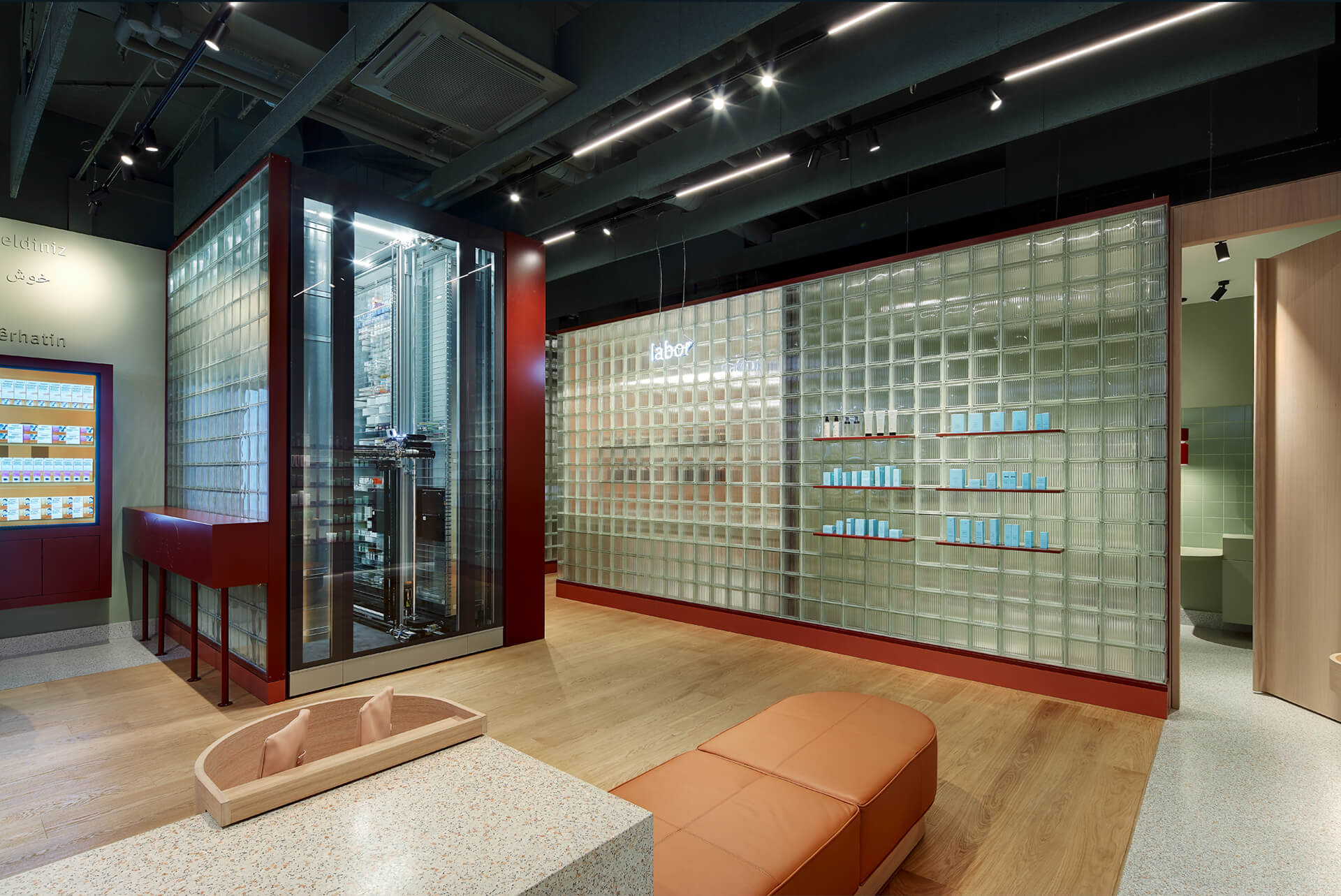 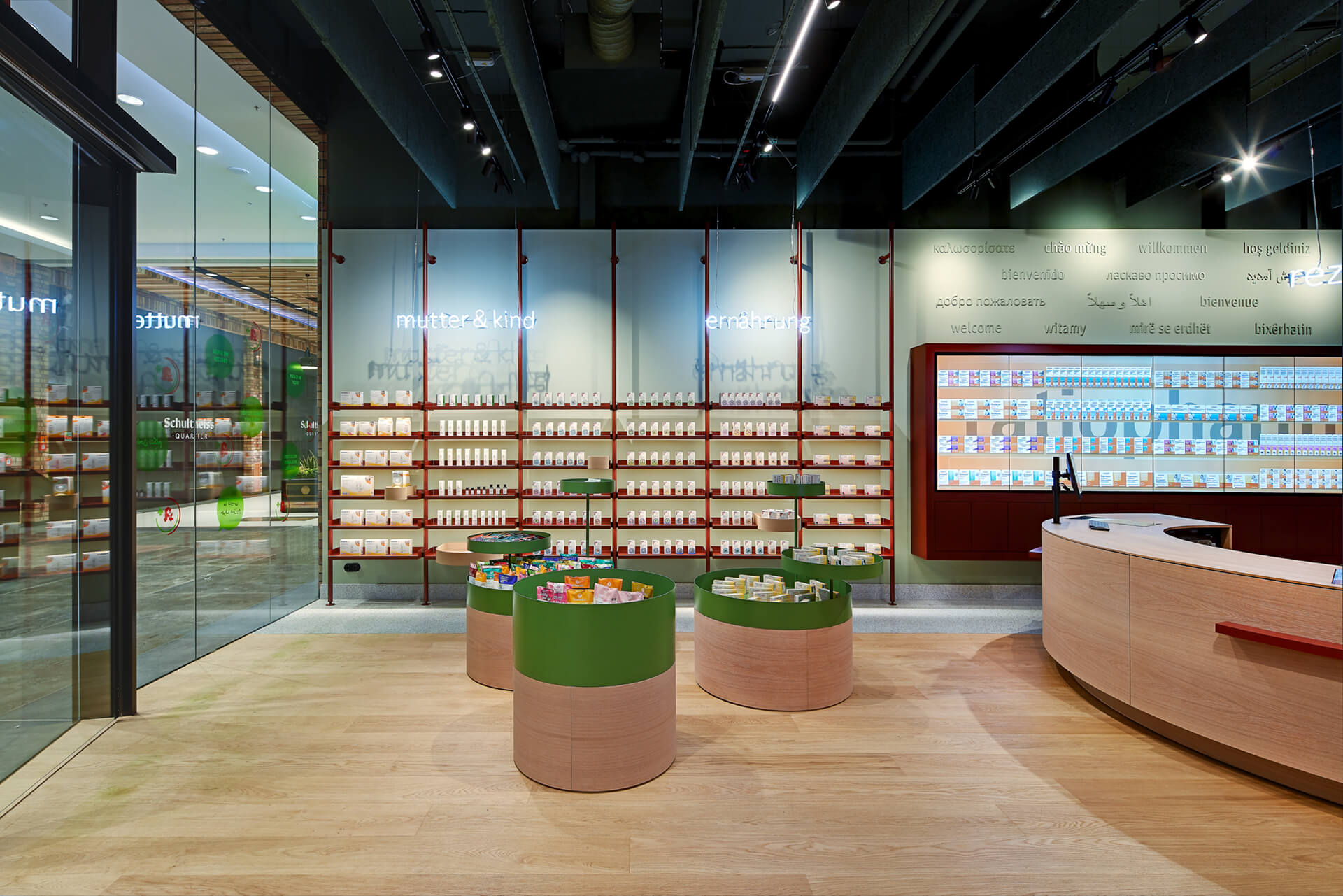 Studio Aisslinger’s preference for a warm atmosphere and a human approach does not come out of nowhere. The upswing of health awareness has sparked a rise of public spaces designed to recharge and recover. These sanctuaries from hectic city life are claiming an increasing share of the hospitality industry, where wellness activities are already omnipresent. Conversely, medical institutions and healthcare environments have started to adopt the more welcoming vibe inherent to cafés and hotels, accommodating doctor-patient encounters in less clinical settings. Pharmacies such as Apotheke are smart to follow suit. By putting accessibility, trust and convenience at the forefront of their designs, they safeguard their position in a world oversaturated with health-related advice.

In the UK, it’s a position that seems to be quite strong at the moment – a 2018 healthcare survey commissioned by pharmaceutical company Sanofi shows that almost two-thirds of British people would rather visit a pharmacist than a GP for advice on minor ailments. The survey revealed a significant generational difference, however: 50 per cent aged 16 to 24 said they would visit a pharmacy for advice, compared with 70 per cent of respondents between 45 and 54 years of age. Whether the same is true in other countries remains to be seen, but if there is even the smallest chance that better interior designs can make young adults choose the pharmacist over an online symptom checker or self-diagnosis app, isn’t that alone worth the investment?

This article is part of Frame 127, our current print issue. You can order your copy here.