Completed at the end of 2016, Ameller & Dubois’ timber-clad educational complex includes two schools, sports grounds and a gymnasium, as well as a kindergarten with playground for the younger generation. The complex is 40-km east of the centre of the French capital and only a 30-minute walk from Disneyland Paris, in the south of an area defined by the 344 ring-road, which forms a near-perfect circular border around the magical kingdom and its neighbours. 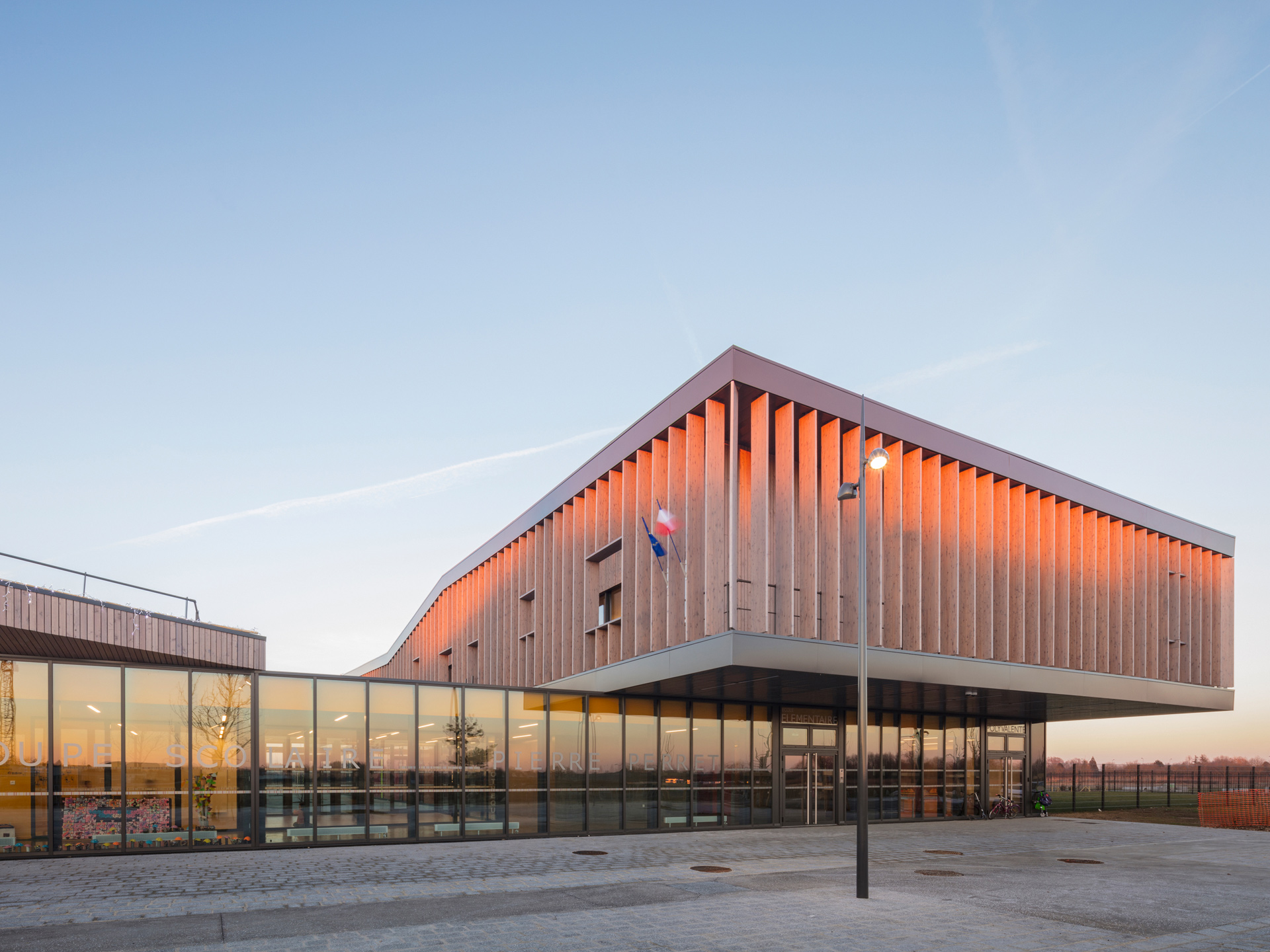 The fantasy of Serris itself, however, was somewhat of a concern to the architect. While it seems wrong to even contemplate criticising Disneyland – which the firm describes as ‘a true engine of urban development on a greenfield site’ – there is an undeniable mimicking, throughout the area, of the traditional Haussmann-style architecture associated with the 19th-century remodelling of Paris. 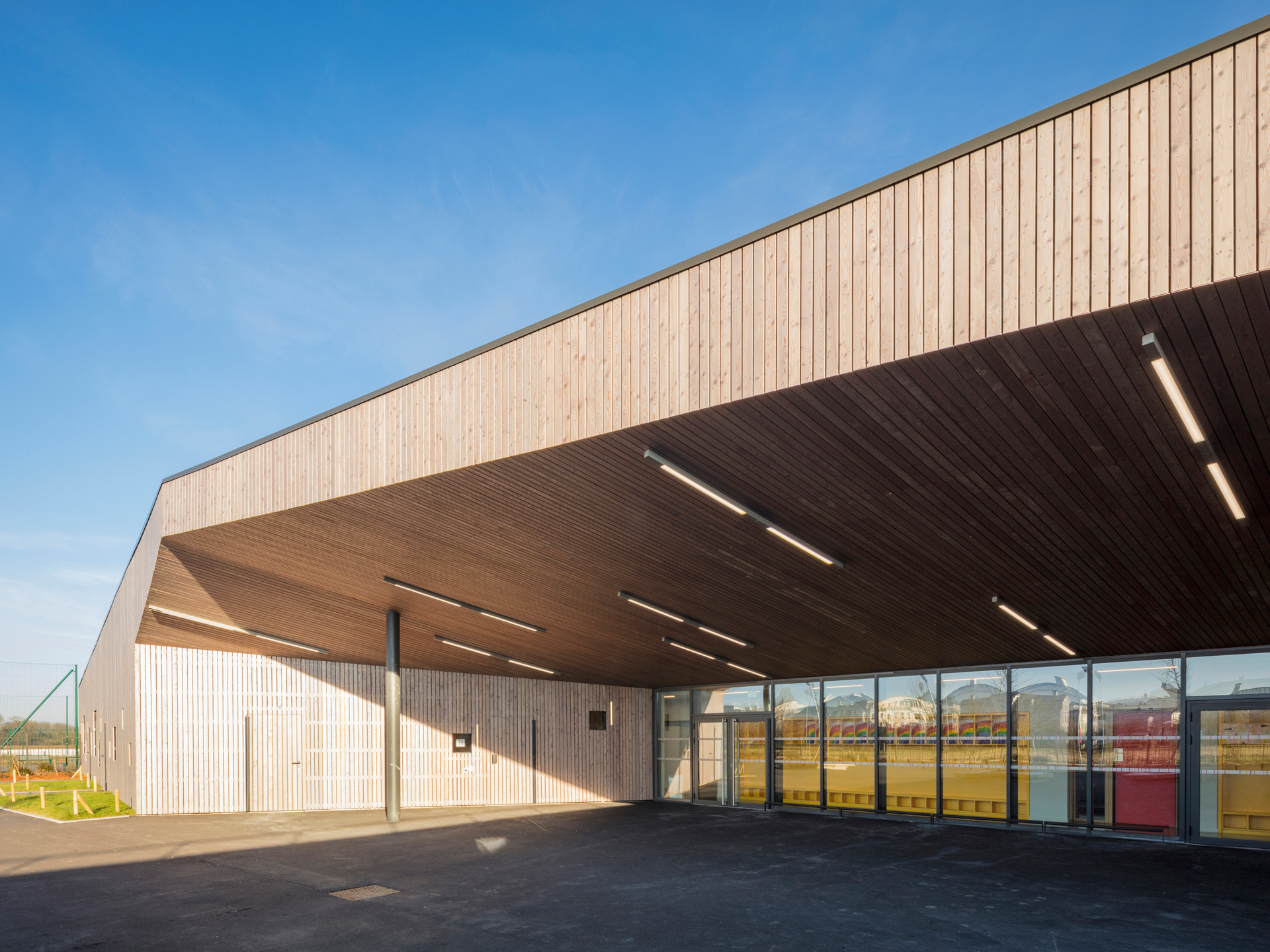 The firm won a competition for the school project in 2012 and architect Frédéric Allinne believes that the design’s contrast with its artificial surroundings is partly responsible: ‘We saw the competition as an opportunity – almost as a duty – to hint about what a pleasant life may be like outside the pristinely perfect urban design,’ he says. ‘A humble piece of genuine 21st-century architecture seemed to be what Serris needed the most. The jury shared our point of view and liked the wooden touch of the design – and the local population seems to appreciate it.’ 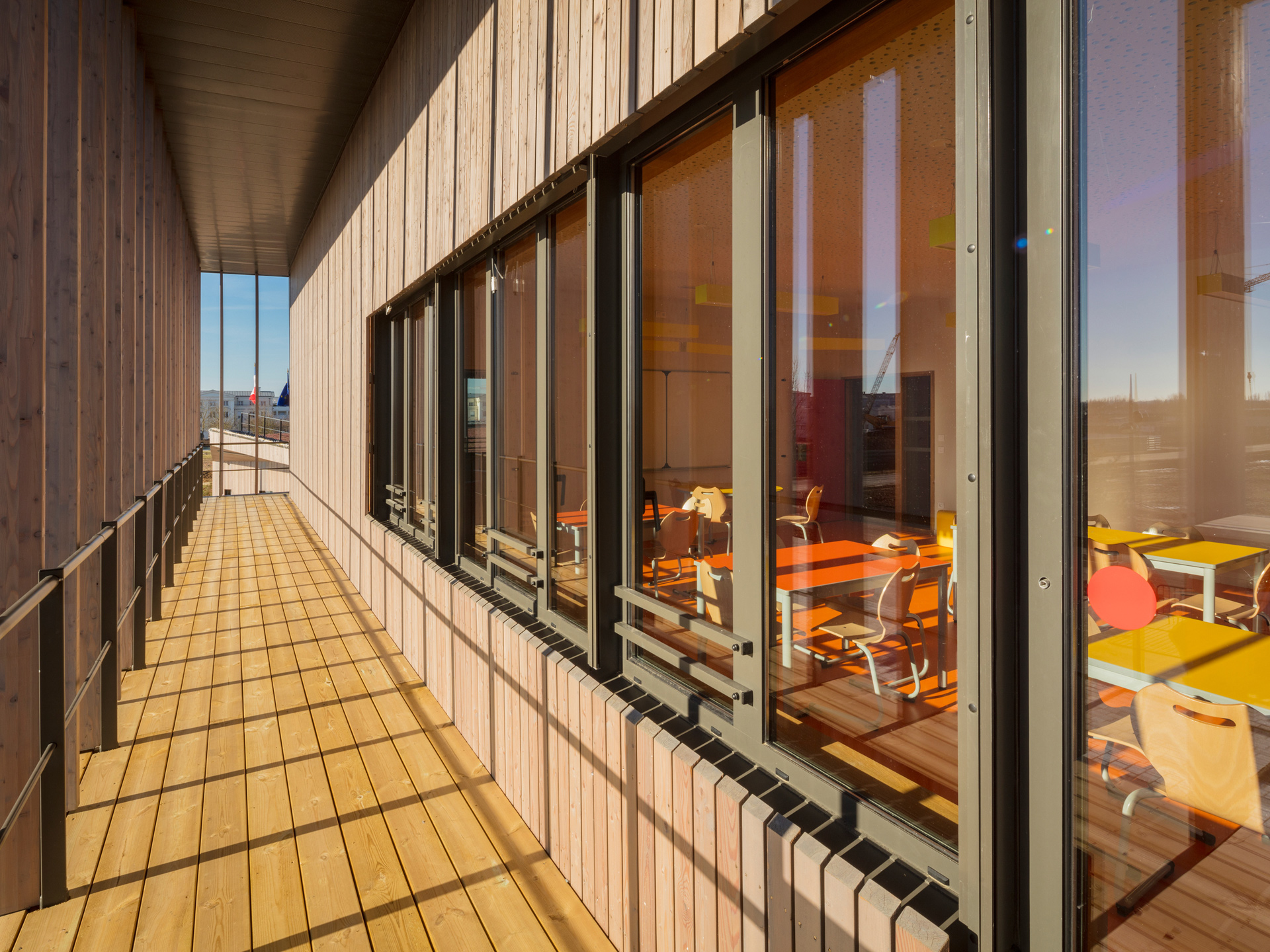 ‘The design follows established principles of school building,’ the firm comments. ‘It arranges the functions meaningfully within the area and creates attractive outer spaces.’ The architect swerves the local pressure to conform to the architectural ‘sameness’ of the faux-neoclassical plastered façades with a larch-timber cladding and generous blasts of colour. 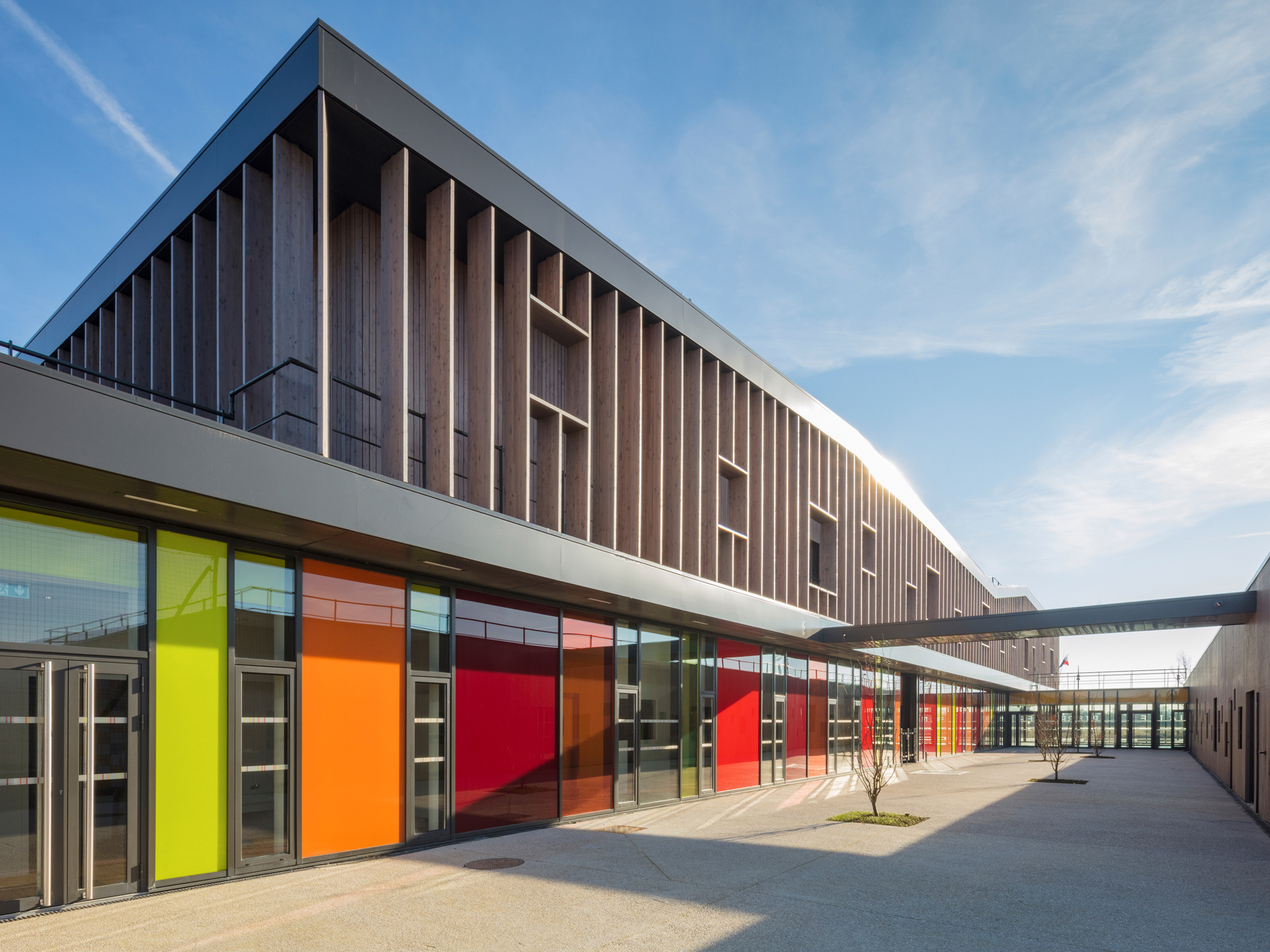 In fact, the bold, stacked volumes of the complex don’t really feel like they present a front façade at all but provide a sculptural silhouette regardless of the direction from which it is approached. Ameller & Dubois isn’t simply inviting pupils into a building for education but is proposing a counterpoint to a near-perfect way of life that might just be a fairy tale. 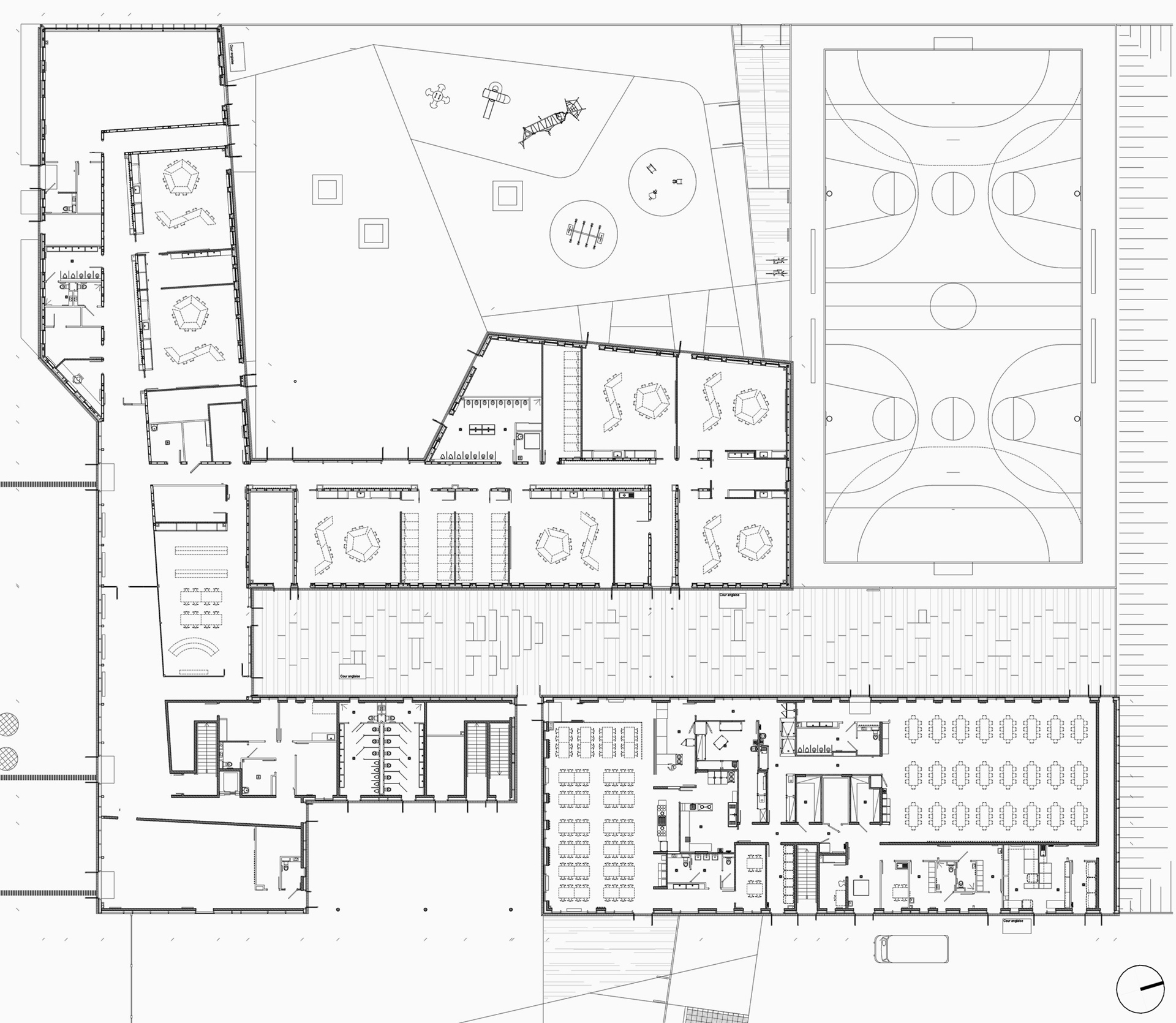