At Frame Lab, OMA’s David Gianotten sets the stage for the architecture of tomorrow

OMA’s Managing Partner-Architect David Gianotten speaks on the changing role of architects in sustainable building at Frame Lab on 22 February.

Gianotten’s rocketing career began when he joined OMA in 2008; continued in 2009, when he established the firm’s Hong Kong office; cleared the following hurdle in 2010, when he was made partner; and advanced again in 2015, when he assumed the position of managing partner. His portfolio spans the eastern hemisphere, from the Asia-Pacific Region to the Netherlands. 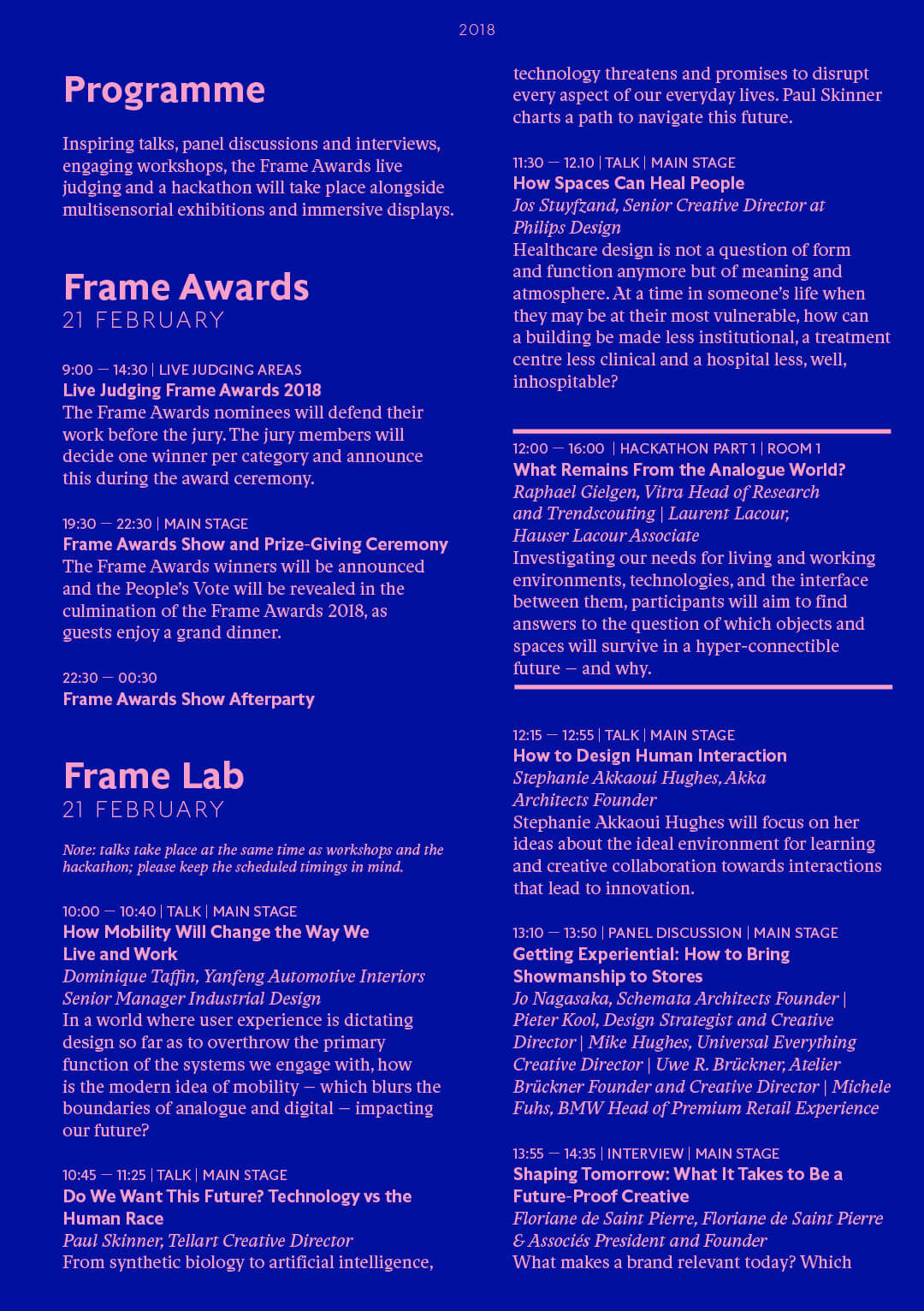 Click the image above to view the full Frame Lab programme of talks, panel discussions and workshops. To find out more about the exhibiting brands and designers, click here.

According to the Dutchman, sustainable building involves more than material applications, energy consumption and the right marketing jargon. ‘Architects should also understand the socioeconomic context of a project. Making plans for a building’s impact on this context will allow them to embed it in its surroundings in a sustainable way.’ 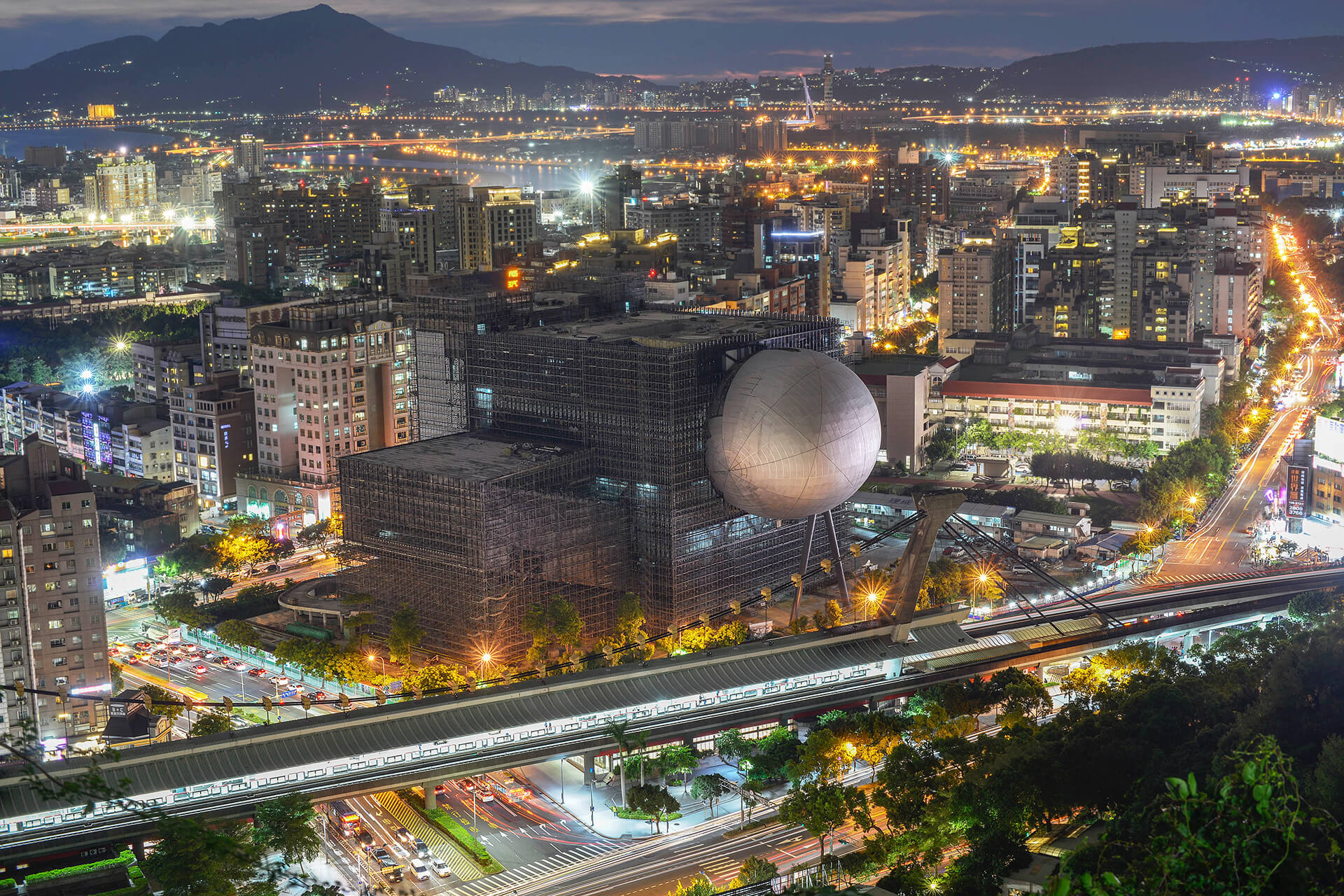 The Taipei Performing Arts Center (TPAC) for Taipei City's Department of Cultural Affairs asks not what a theatre can do for stage performances, but what drama can do for a city. Inspired by the most exciting theatrical events of the past 100 years taking place outside the spaces formally designed for them. © OMA by Chris Stowers 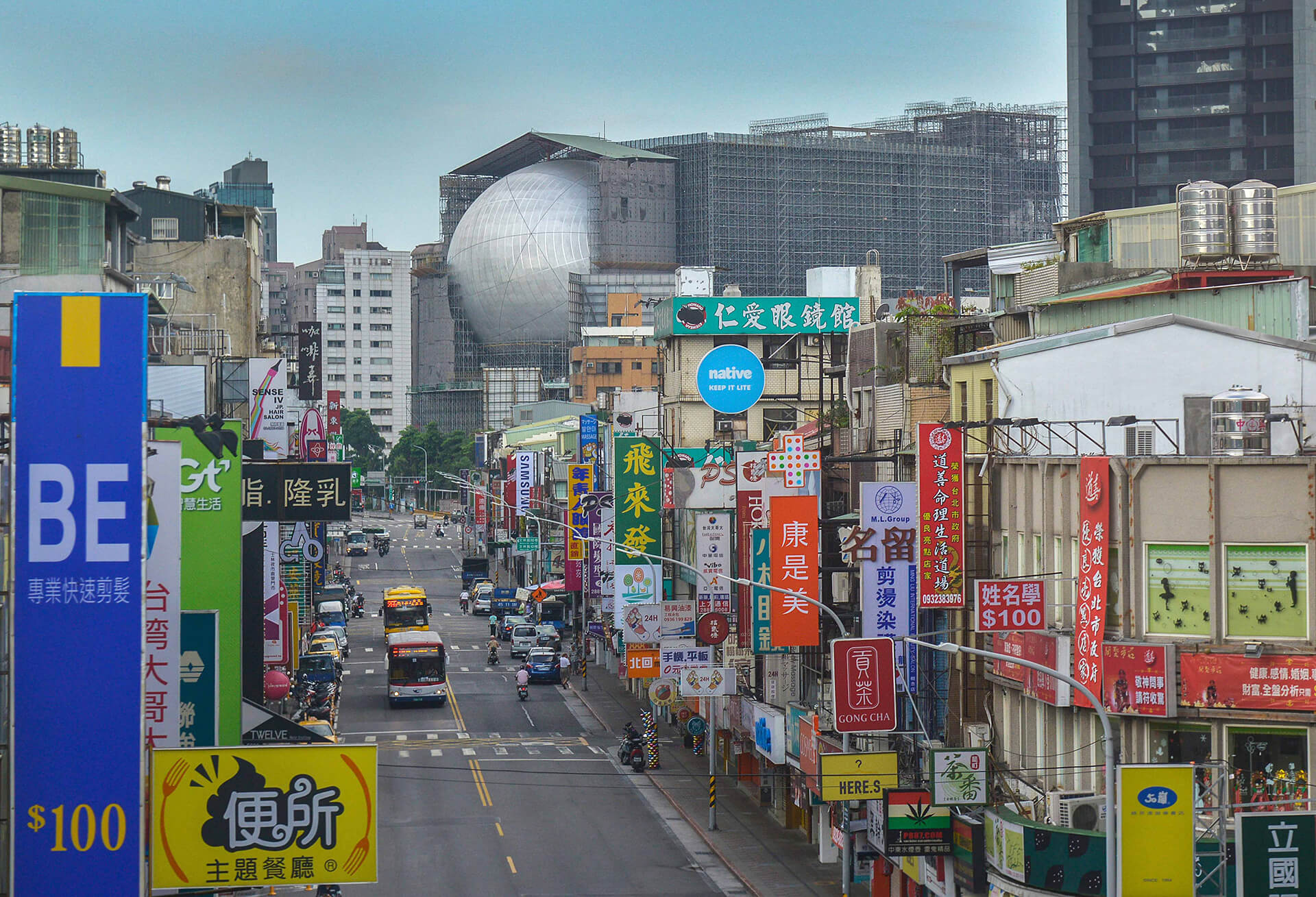 Gianotten cites OMA’s master plan for Feyenoord City in Rotterdam as an example. Originally asked to design a stadium for football club Feyenoord, Gianotten and his team came up with an expanded proposal that comprises, in addition to the stadium, a completely new residential neighbourhood, commercial facilities and public space. Earlier plans for building a new stadium or renovating the existing one did not have the broad-based support that a successful project requires. ‘We made a socioeconomic plan that’s separate from both the master plan and any accompanying architecture. As a result, everyone immediately understood that our idea extended beyond a new stadium built for two football matches a week. Feyenoord City is about the development of an area: it provides better traffic circulation for Rotterdam-Zuid as well as job opportunities, and access to education is at the heart of the masterplan. Having a private organization like Feyenoord as the driving force behind our proposal is totally unique. It’s an entirely new experience for the Netherlands.’ 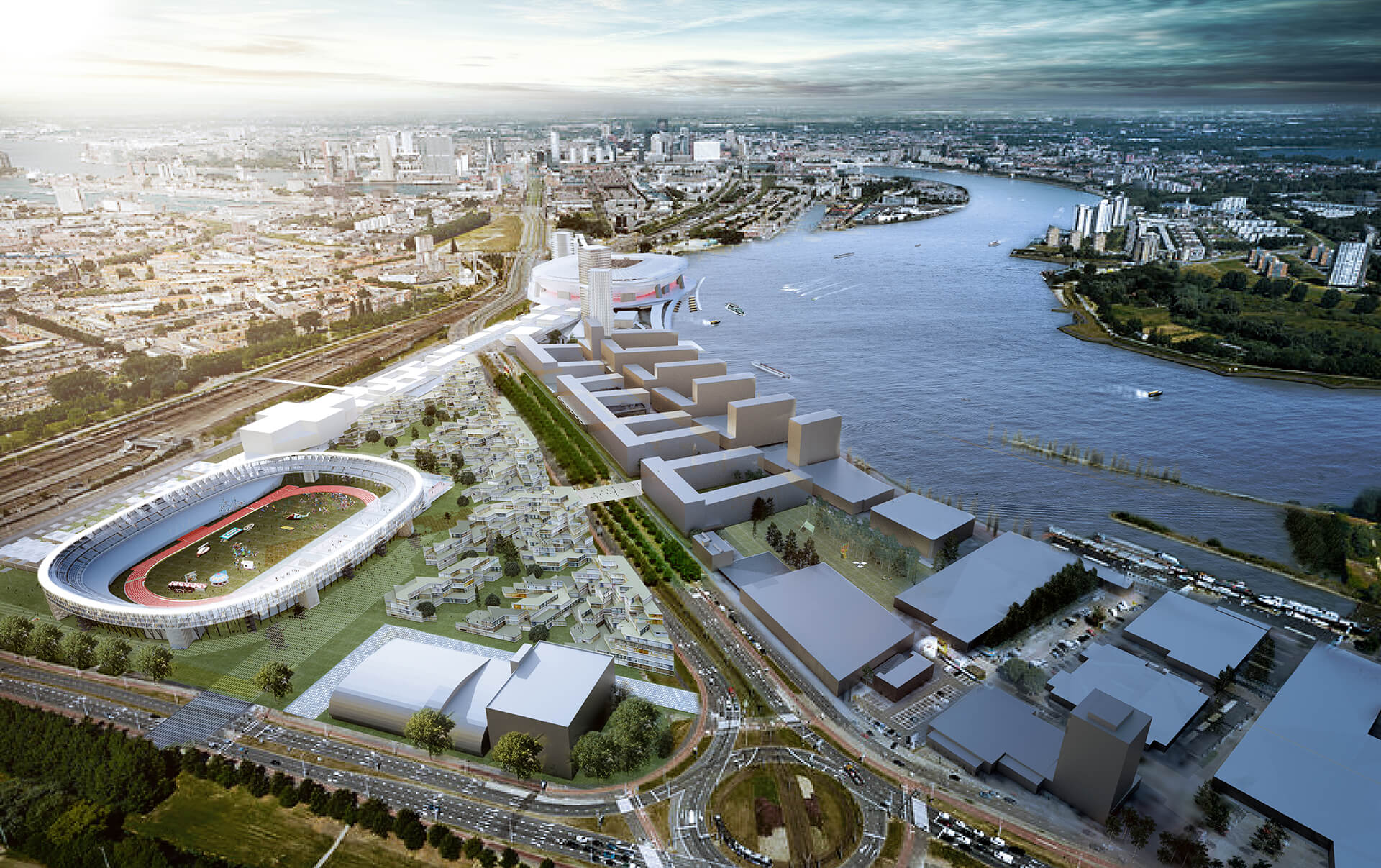 Originally asked to design a stadium in Rotterdam, Gianotten and his team came up with Feyenoord City, an expanded proposal to develop an entire area.

Gianotten is seeing similar projects emerge in the USA, Australia and Asia. ‘Private and corporate initiatives function there as an enormous flywheel for cities. In South Korea, cities evolve around businesses; in such cases, the government operates wholly in the background, as it were. Initiatives like these generate an enormous dynamic, create employment and shape social structures.’ 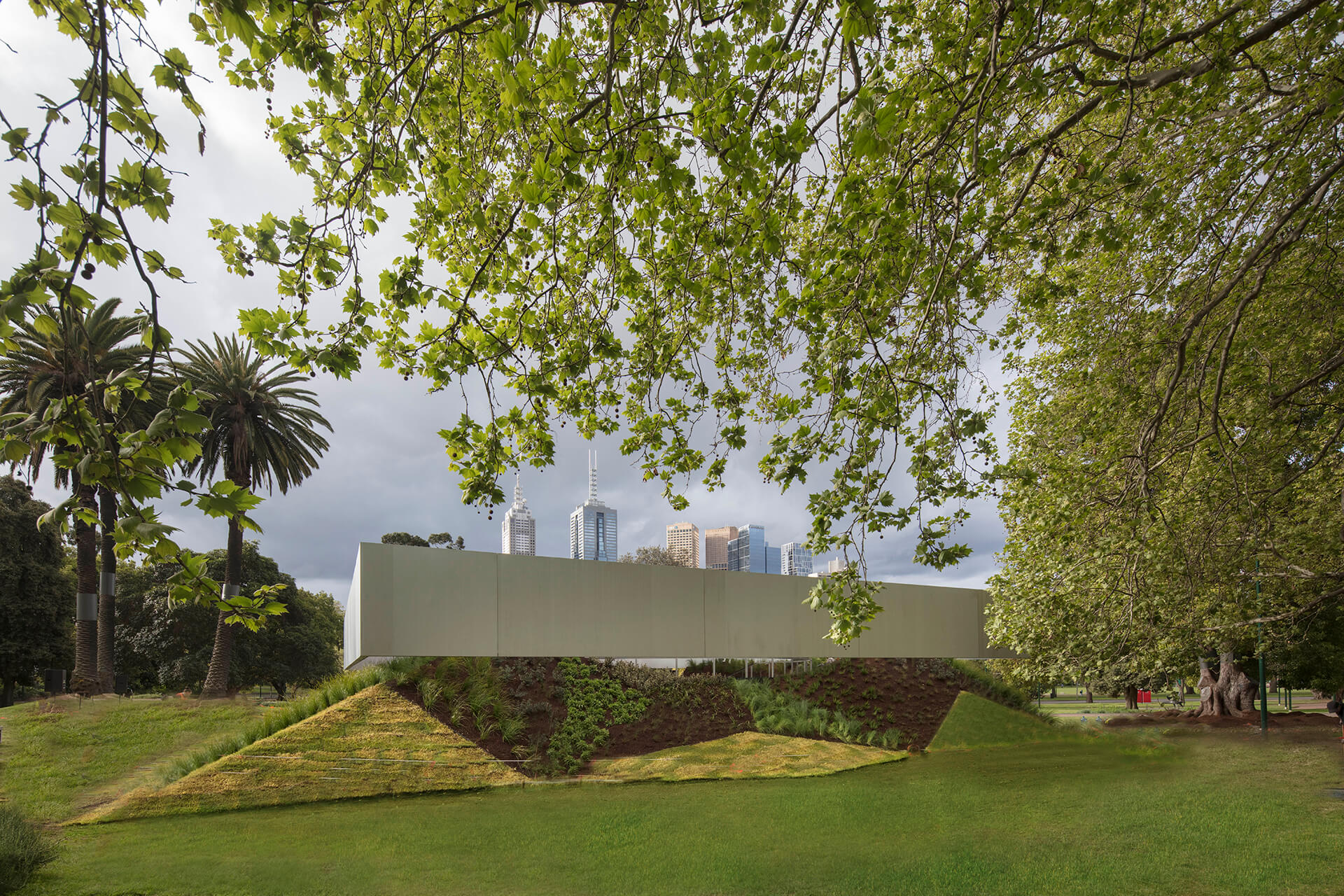 OMA designs the MPavilion in Melbourne, Australia, as well as its cultural programme; part of its ‘bridging’ strategy into the Australian architecture and design landscape.

The Dutch architect fails to see comparable projects originating in his native land as yet. ‘We still assume the government knows what’s best, but I’m convinced that 20 years from now the government will not play a role in urban planning.’ Gianotten believes the Netherlands will be ‘totally surprised’ by the speed at which people will want to move to cities. ‘In Amsterdam, some 13 per cent of the population lives in the centre and in Rotterdam about 8 or 9 per cent. Numbers that need to move in the direction of 40 per cent. People are no longer willing to commute great distances. Ten years from now, today’s most sustainable or most liveable cities won’t top such lists.’

According to Gianotten, the current city model has to change quickly if it’s to absorb the large influx of expats and people now living in rural areas. ‘Rotterdam is overtaking Amsterdam, not because of additional high-rise construction but because Rotterdam itself is a magnet, whereas Amsterdam languishes beneath one of UNESCO’s glass domes. Reduced to a tourist attraction, Amsterdam lacks all other sources of activity.’ 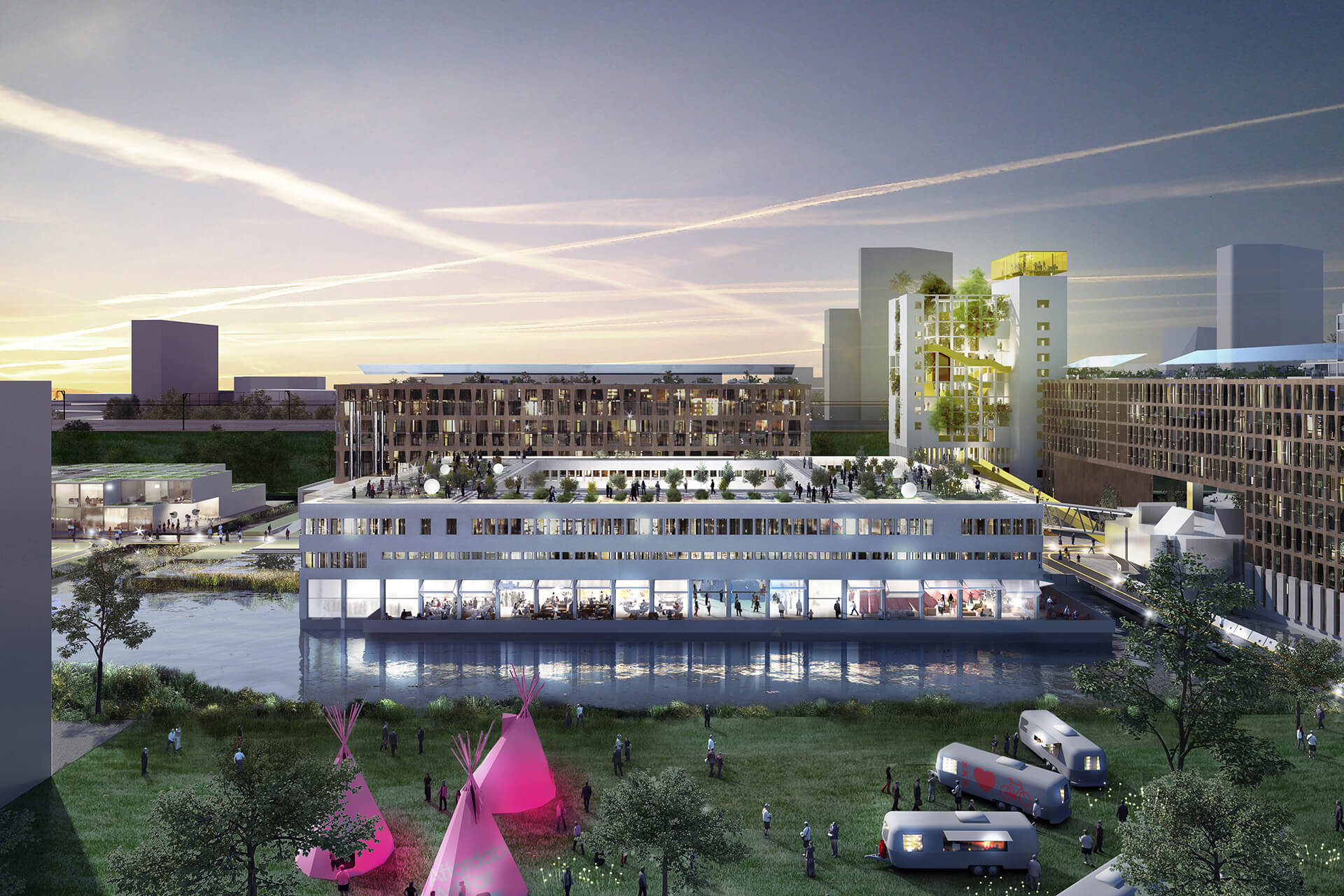 The Bijlmerbajes – a former prison in Amsterdam – is being redeveloped into the Bajes Kwartier, a primarily car-free urban environment linked by a series of pedestrian and bicycle bridges. Also pictured in the header image of this article. Image by Robota, courtesy of OMA.

It’s not enough for Amsterdam to develop one neighbourhood at a time, ultimately culminating in a patchwork of different eras. ‘Instead, you have to combine the diversity of each era at the centre of the city,’ says Gianotten. ‘Strict measures are needed to achieve this goal. You have to say goodbye to things that have functioned for a very long time – and to those that look beautiful and old but can no longer fulfil the role that’s required of them. The glass-dome method will have to change.’

David Gianotten of OMA will address the changing role and structure of an architectural studio with regards to today’s society in his talk How Entrepreneurial Architects Guarantee Sustainability at 10:00 a.m. on 22 February. For the complete programme of talks, discussions, workshops and exhibitions concerning the future of spaces, visit frameawards.com/frame-lab.