Best Of: waste and biomaterial innovation at Dutch Design Week 2019

Courtesy of the designers

At this year’s Dutch Design Week, we’ve seen a remarkable breadth of material sourcing. Designers are increasingly taking to the sea, to petri dishes – even to the bins, in the name of creation. They’re working at the edge of design and science to find better ways of reducing, reusing and recycling, using age-old craft techniques and cutting-edge technology to render usable and beautiful what may have otherwise been overlooked.

Expanding an understanding of the natural resources available to humankind, these projects help to optimistically – and necessarily – redefine that most important step in the supply chain. 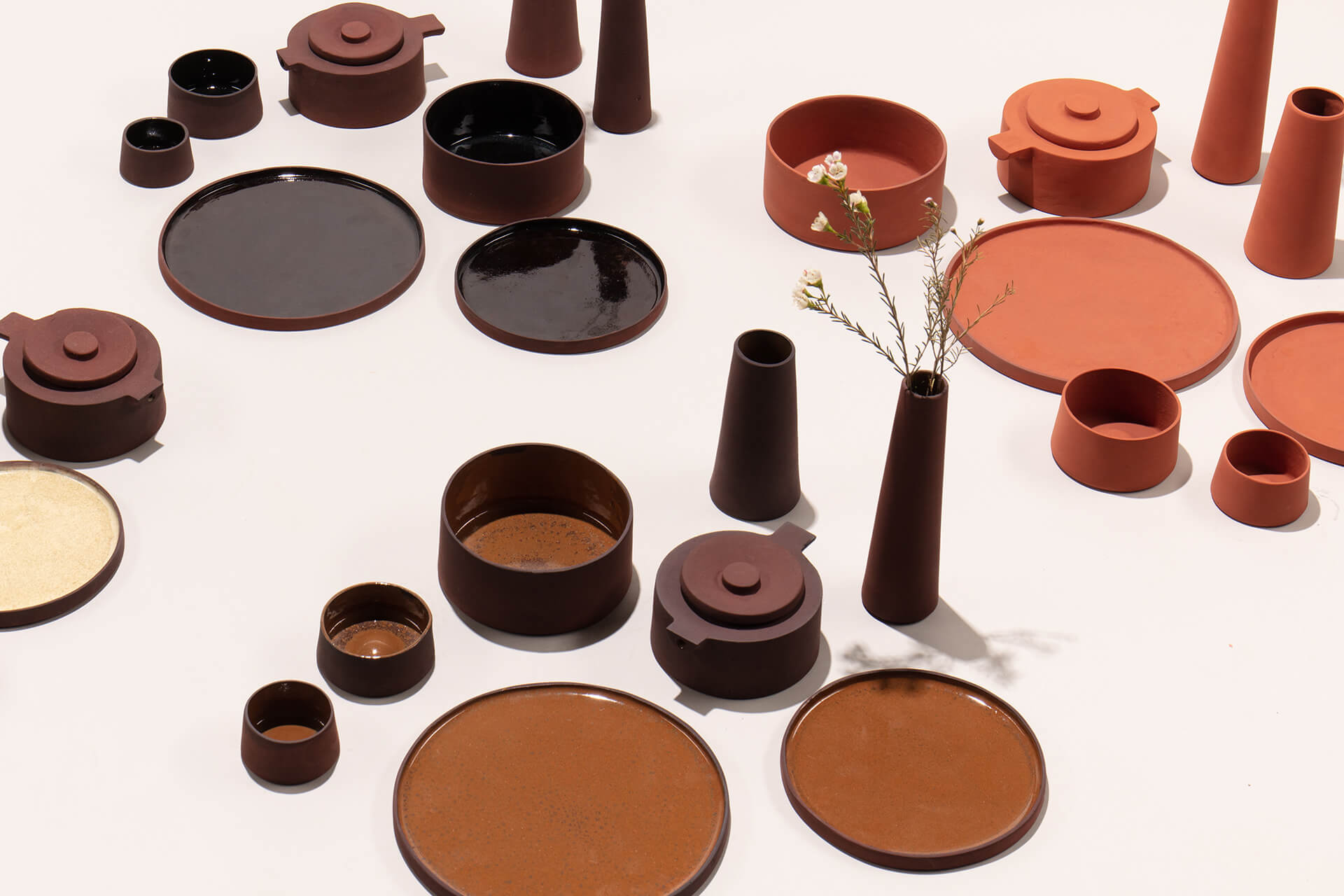 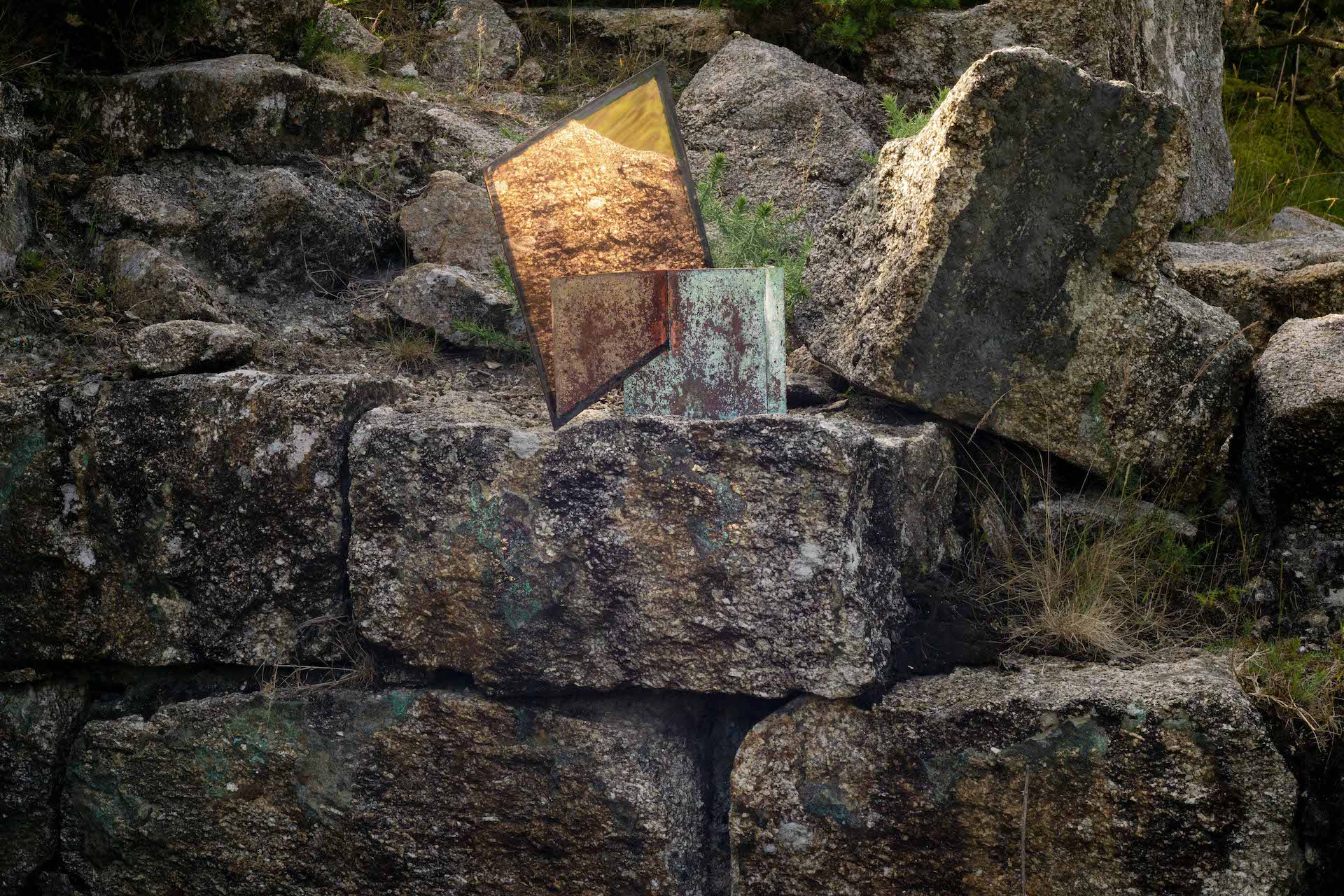 HOW IT’S USED: Rouff, Whittembury and Bockelmann show that wastelands can be a source of beauty: their work focuses on byproducts from the metallurgical sector, red mud and copper slag. Red mud in particular is hazardous waste, but for every part of aluminium made, 2.5 times the mud is created; the designers reworked it into vibrant range of slip-cast tableware and tiles.

Copper slag, on the other hand, is from the copper smelting process – 40 million tonnes are produced annually, and that number is only set to increase. This is Copper, a collaboration with KU Leuven’s Sustainable Materials group, illustrates how the byproduct can be used as an alternative cement, comparable in strength, having a lower carbon footprint and resistant to heat, acid and water. The team made a range of interior pieces, including a chair, mirror, tiles and a lamp. 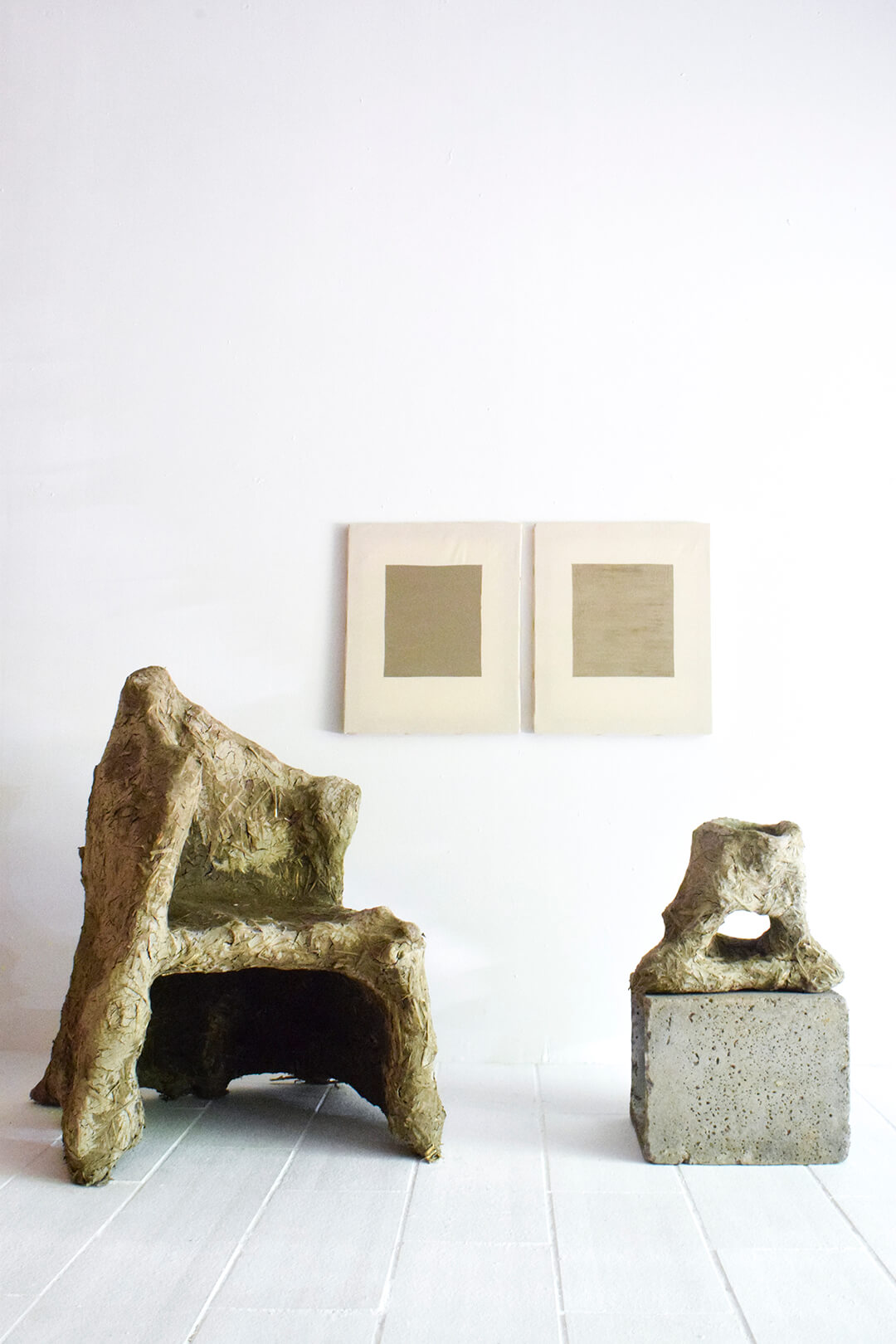 HOW IT’S USED: A harbourmaster on the French Atlantic coast near Bordeaux taught Piette how to source the discarded ocean sediment that comprises Marecreo, a holistic interior collection of ceramics, furniture, wall coatings, bricks and tiles. The French designer collaborates with engineers and craftsman to develop the techniques needed to sculpt the region-specific material: ‘My design and its aesthetic aims to show the local topography, to reveal the origin of the product,’ she explains. 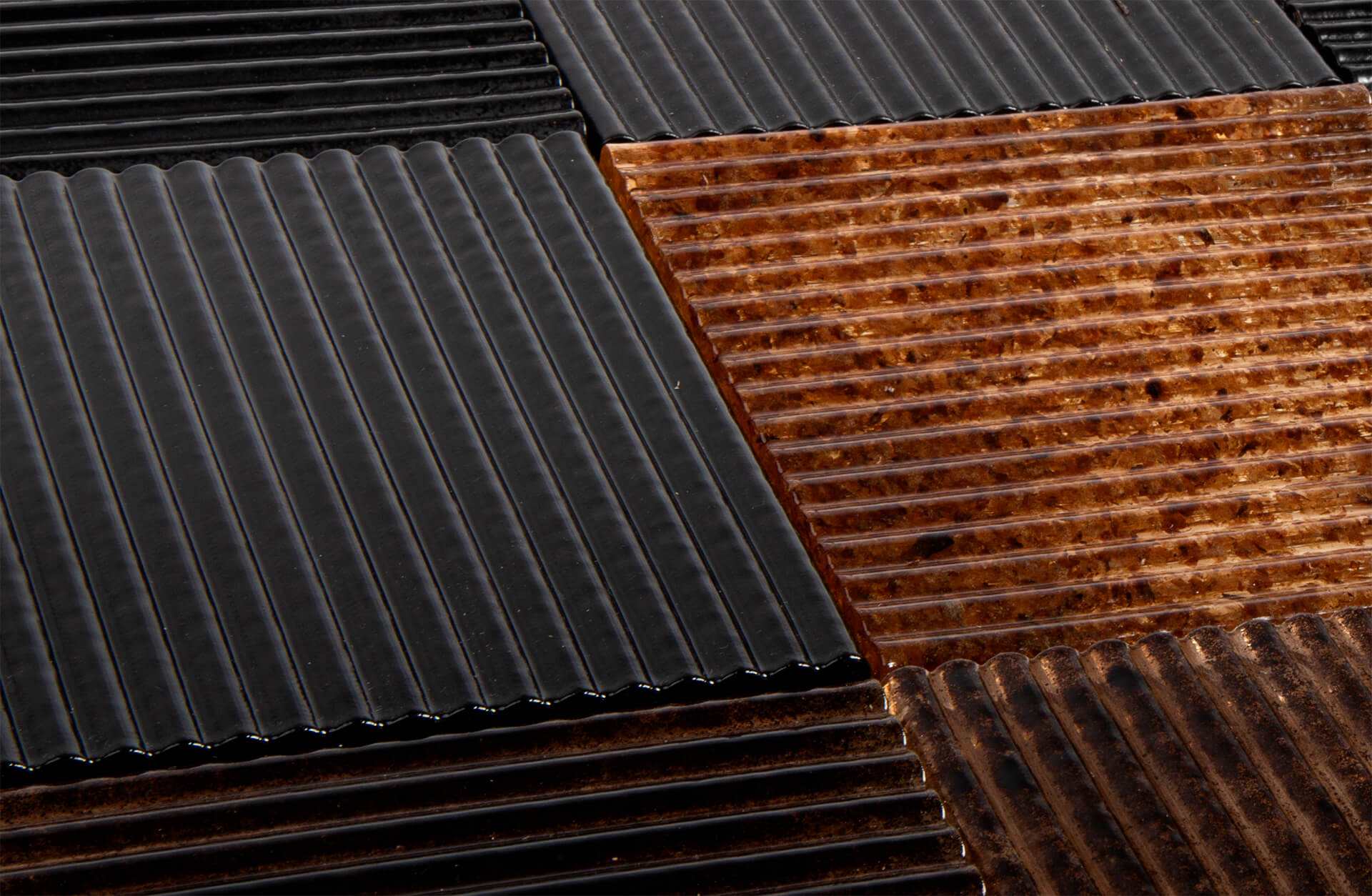 THE MATERIAL: Coffee waste and resin

HOW IT’S USED: Looking for a way to use locally generated waste to create a product with new value led Kuźmiński to the coffee machine. Tumicoffee tiles – made from mixing the used brown grounds and resin – can play a part in the future ‘interior design of the premises from which the [waste]’ is created, says Kuźmiński. 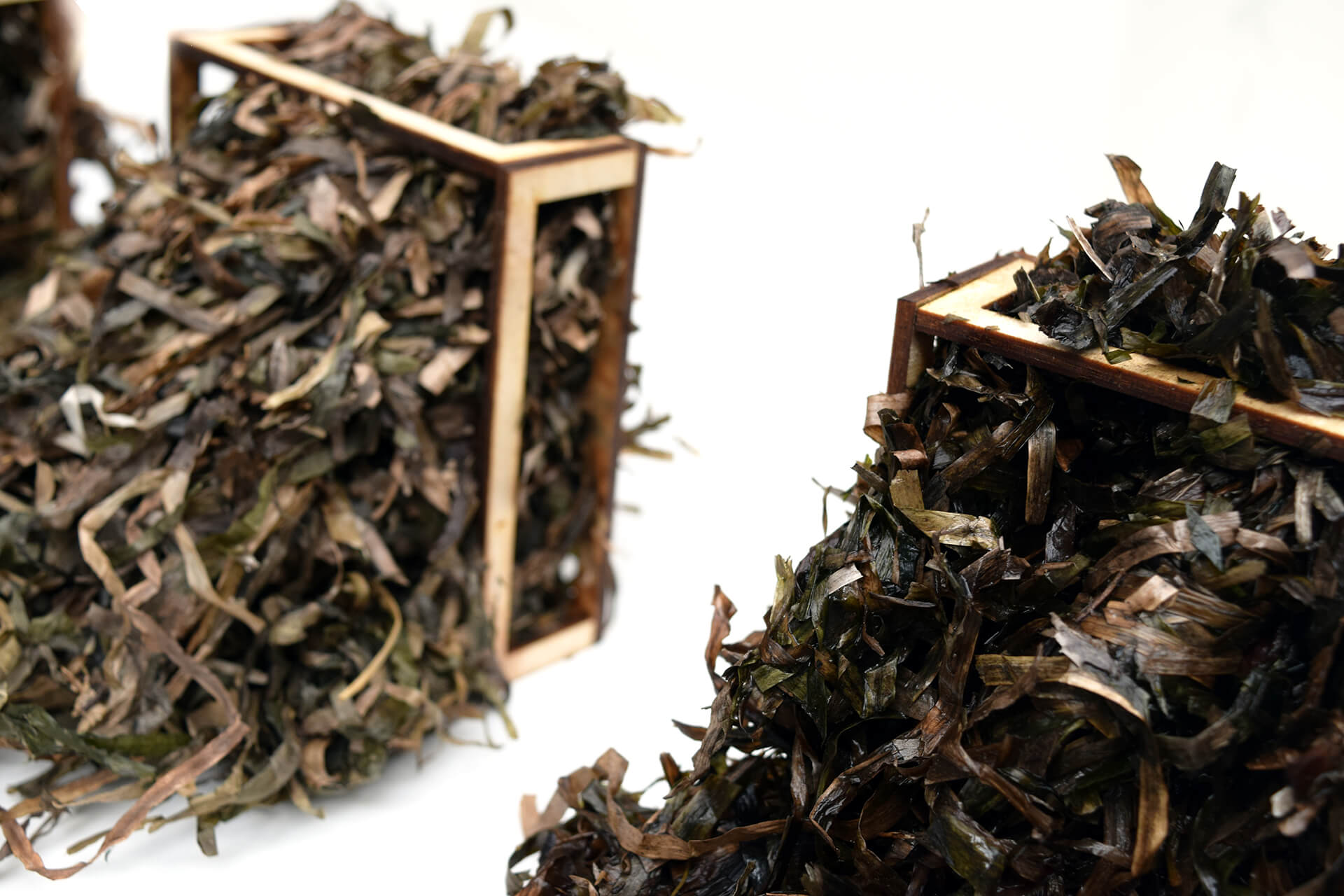 HOW IT’S USED: Inspired to aid in preserving a traditional roofing technique seen on structures on the Danish island of Læsø, Larsen found a way to introduce seaweed thatching to the modern construction industry. Working with eelgrass – naturally fireproof, rot resistant, insulating, carbon negative and waterproof after a year – she created prefabricated seaweed panels that can be installed on roof or façade. ‘Plants grow in it, giving the effect of a green roof,’ says Larsen. ‘It’s a material that should be considered seriously in an era of climate change. 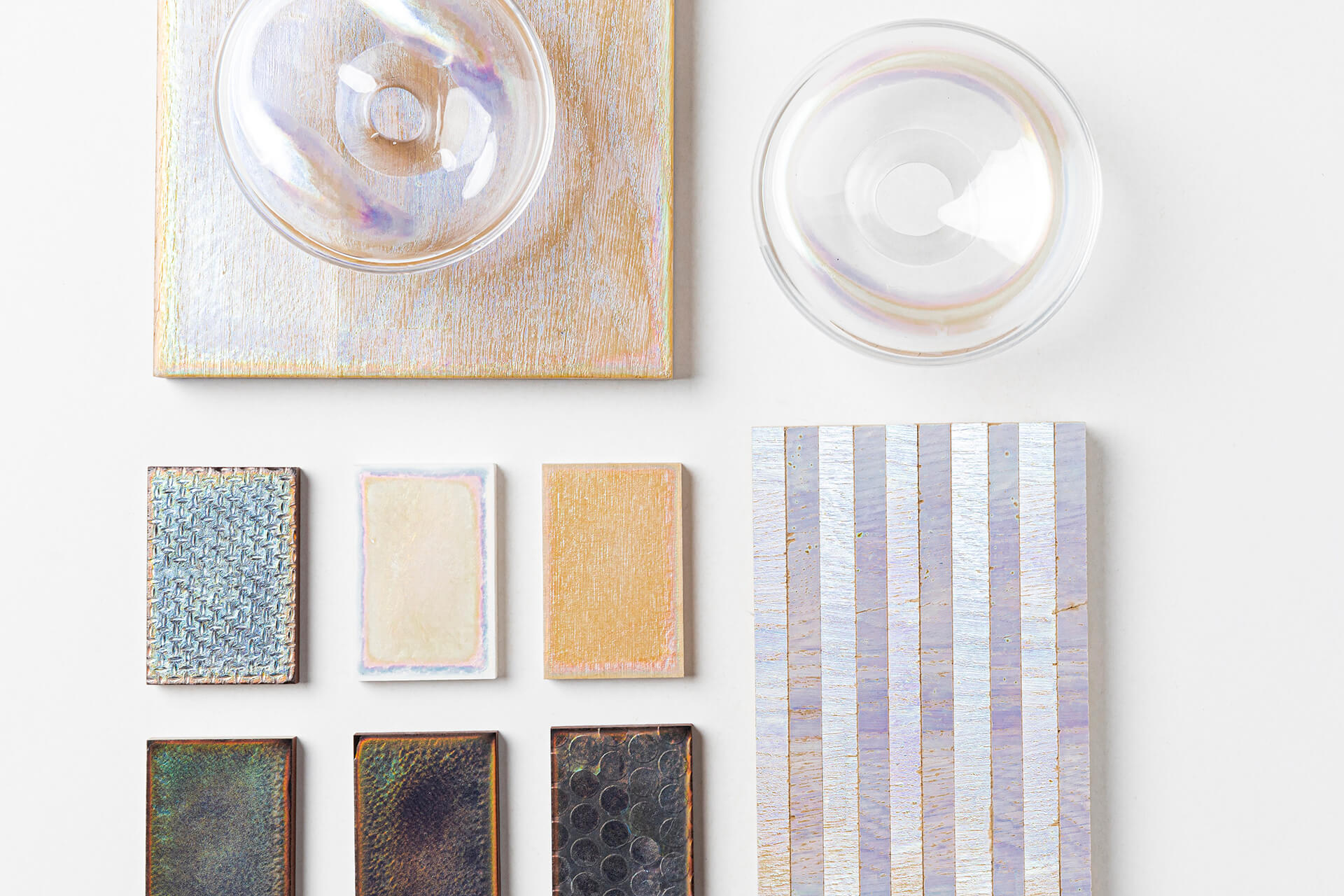 HOW IT’S USED: Shiny and glittery finishes on design objects are notoriously environmentally detrimental to produce. Yau identified a way to create structural colouration on wood by way of microscopically small, iridescent nanostructures similar to those found in the feathers of a peacock or the wings of a butterfly. The method eliminates the need for chemical compounds and finishes arise from the composition of the wood itself, making the colour biodegradable, nontoxic and unfading in sunlight. 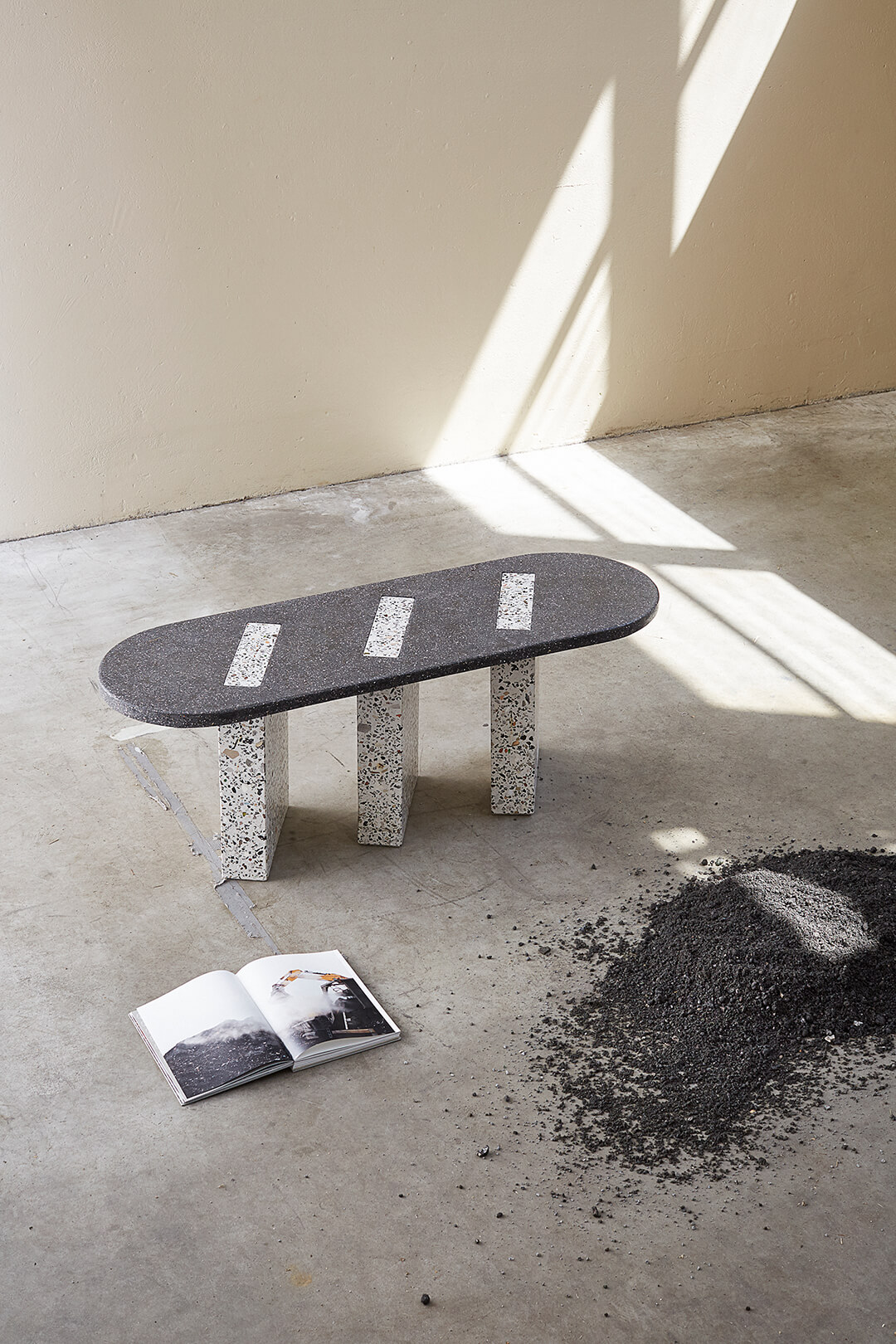 HOW IT’S USED: Even when household waste is incinerated at waste-to-energy plants, a new material is born: bottom ash. Ten Tije experimented with the non-combustible residue, creating objects from the grey stuff. ‘In the Netherlands one person’s household waste produces an average of 57,5 kg of bottom ash per year,’ explains the designer. ‘This is equal to the average weight of a small woman.’ 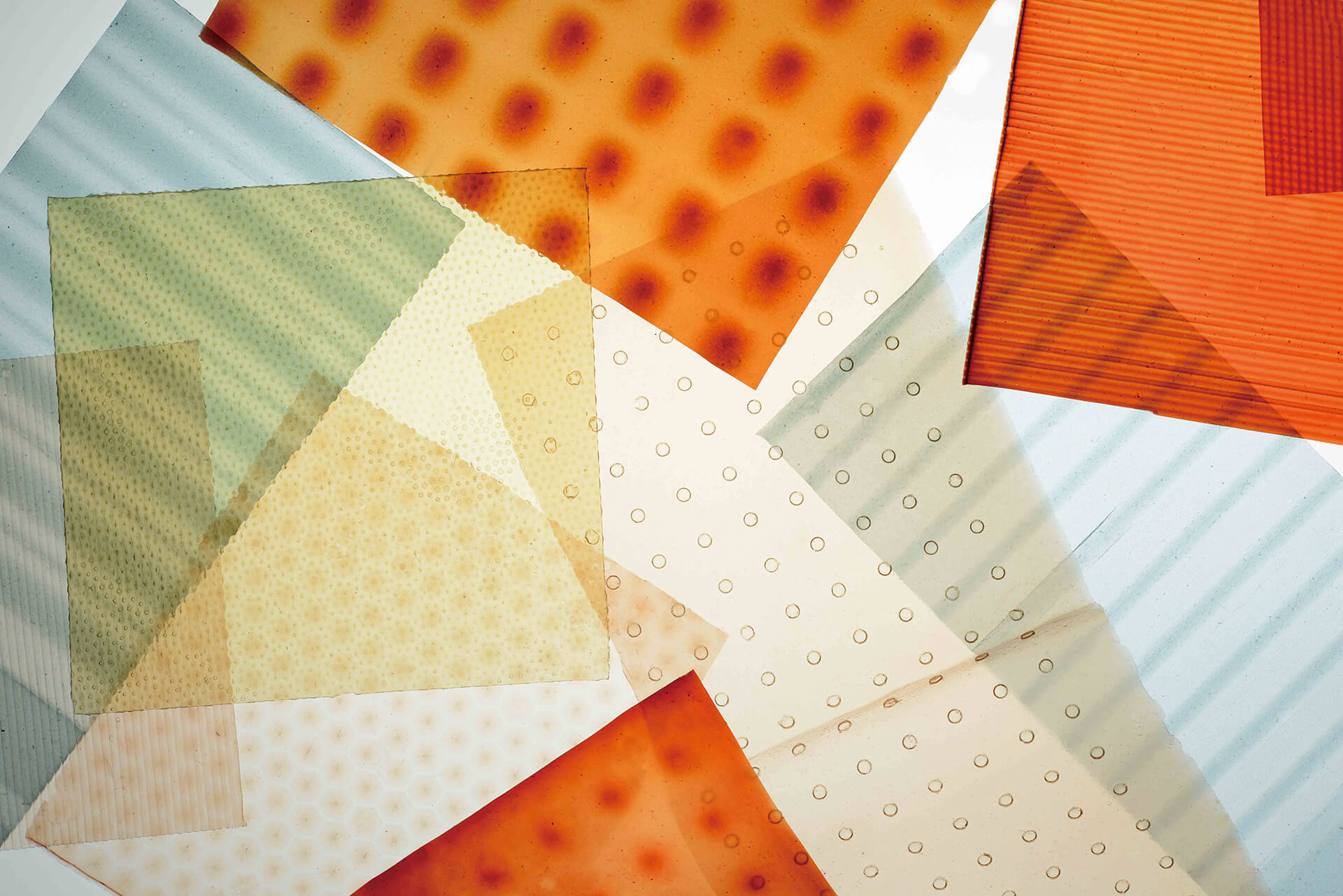 HOW IT’S USED: Berlin-based Song developed a fully biodegradable leather using banana and orange peel, or soy milk, in combination with a natural binding agent. Manufacturing options such as laser cutting, dyeing and printing and 3D printing and modelling pave the way for the material – which is comparable in durability and water resistance to animal leather – to be used for a wide range of design possibilities and new commercial products. 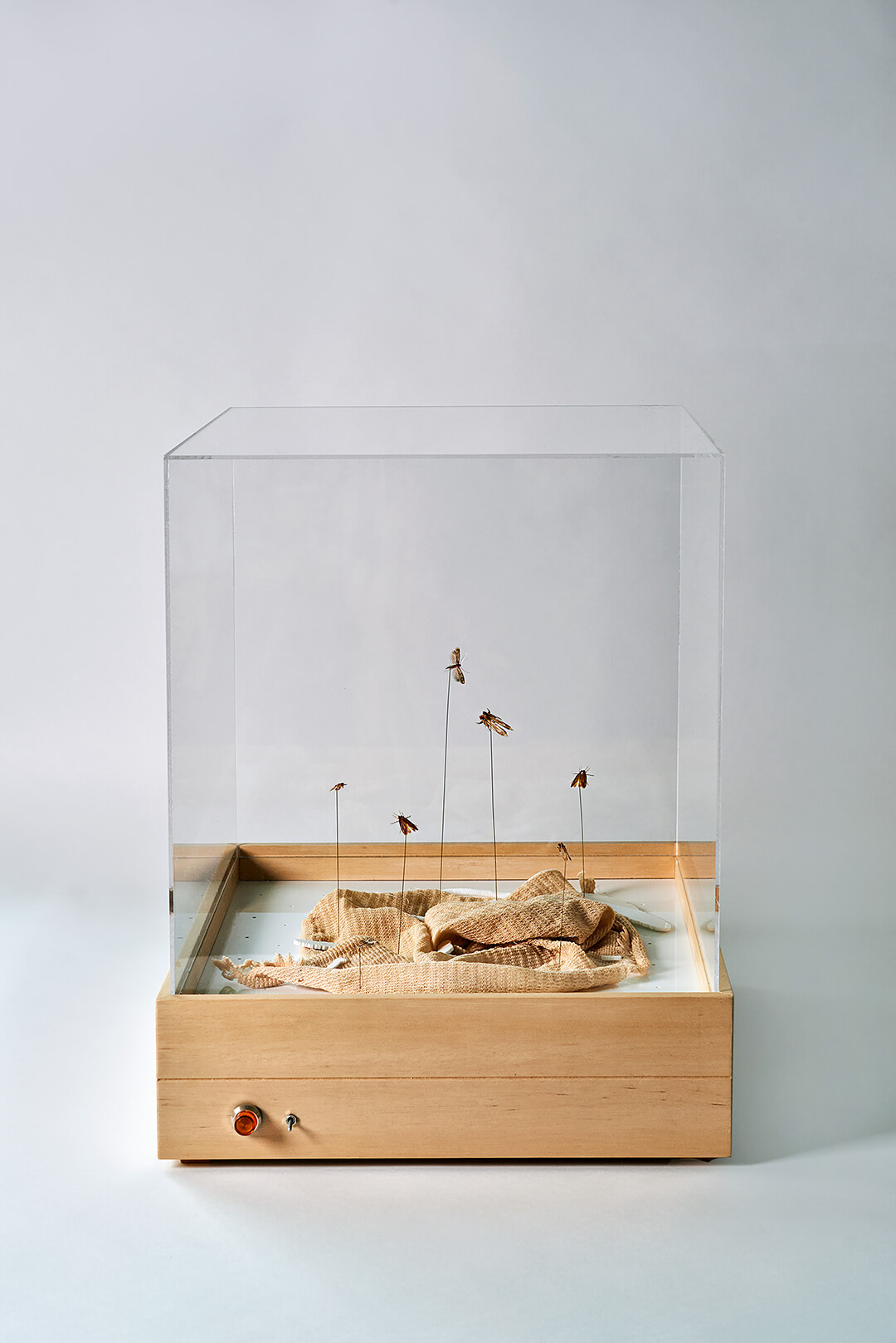 HOW IT’S USED: Natural recyclers, not destroyers: this is how Pisapia imagines household moths can one day be seen. Considering the enormous amount of waste and pollution the textile industry creates, the designer investigated the potential of farming the insects, observing the ability of their digestive enzymes to break down keratin-based fibres. The resulting dust-like bio waste from the moths can further be used as a material in crafting biodegradable objects. 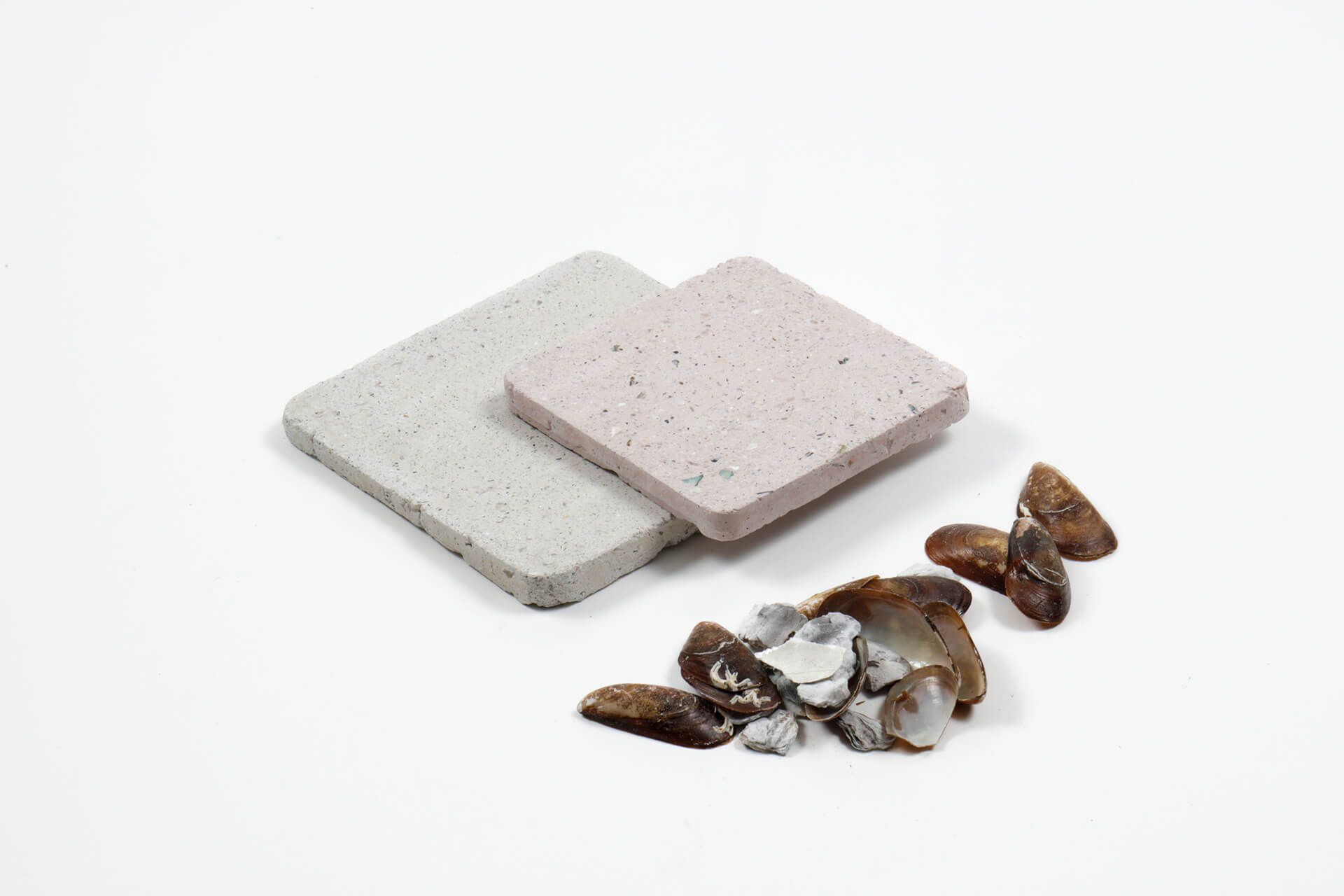 HOW IT’S USED: Designers Hyein Choi and Jihee Moon took to Seoul and London seafood restaurants to collect seashells for Sea Stone, a cement alternative. Every year, seven million tonnes of non-biodegradable, expensive-to-dispose shells are discarded by the seafood industry and aquaculture. Choi and Moon processed, ground and mixed the shells – rich in calcium carbonate – with various natural binders to create a durable surfacing product. 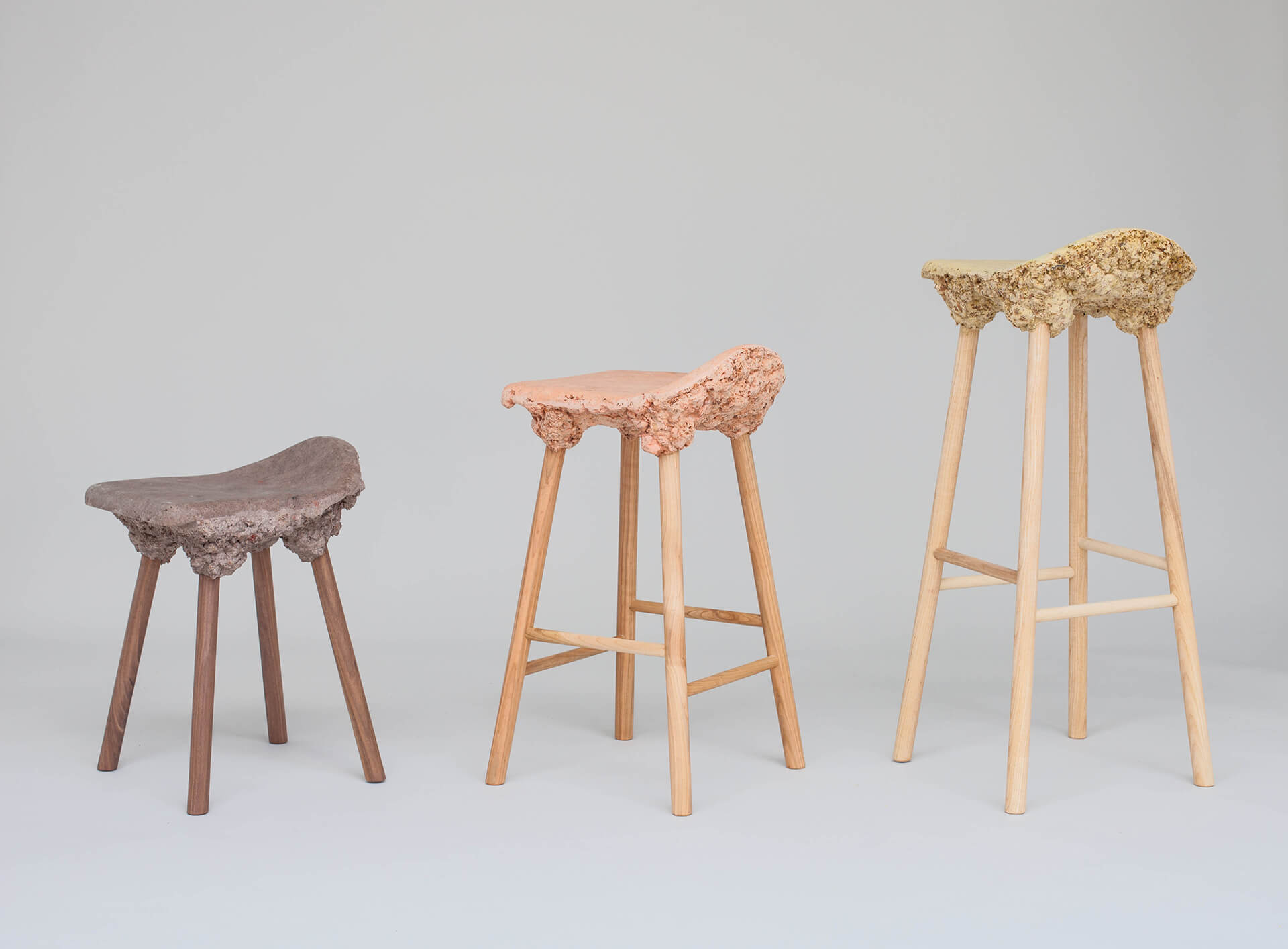 THE MATERIAL: Wood shavings and bioresin

HOW IT’S USED: Over 50 to 80 per cent of timber is wasted during a typical manufacture, explain Van Aubel and Shaw. This was inspiration enough for the designers to create a follow-up range of stools to their MoMA-inducted Well Proven Chairs: the distinctive seating is organically formed through a foaming chemical reaction that occurs when wooden shavings and bioresin come into contact. 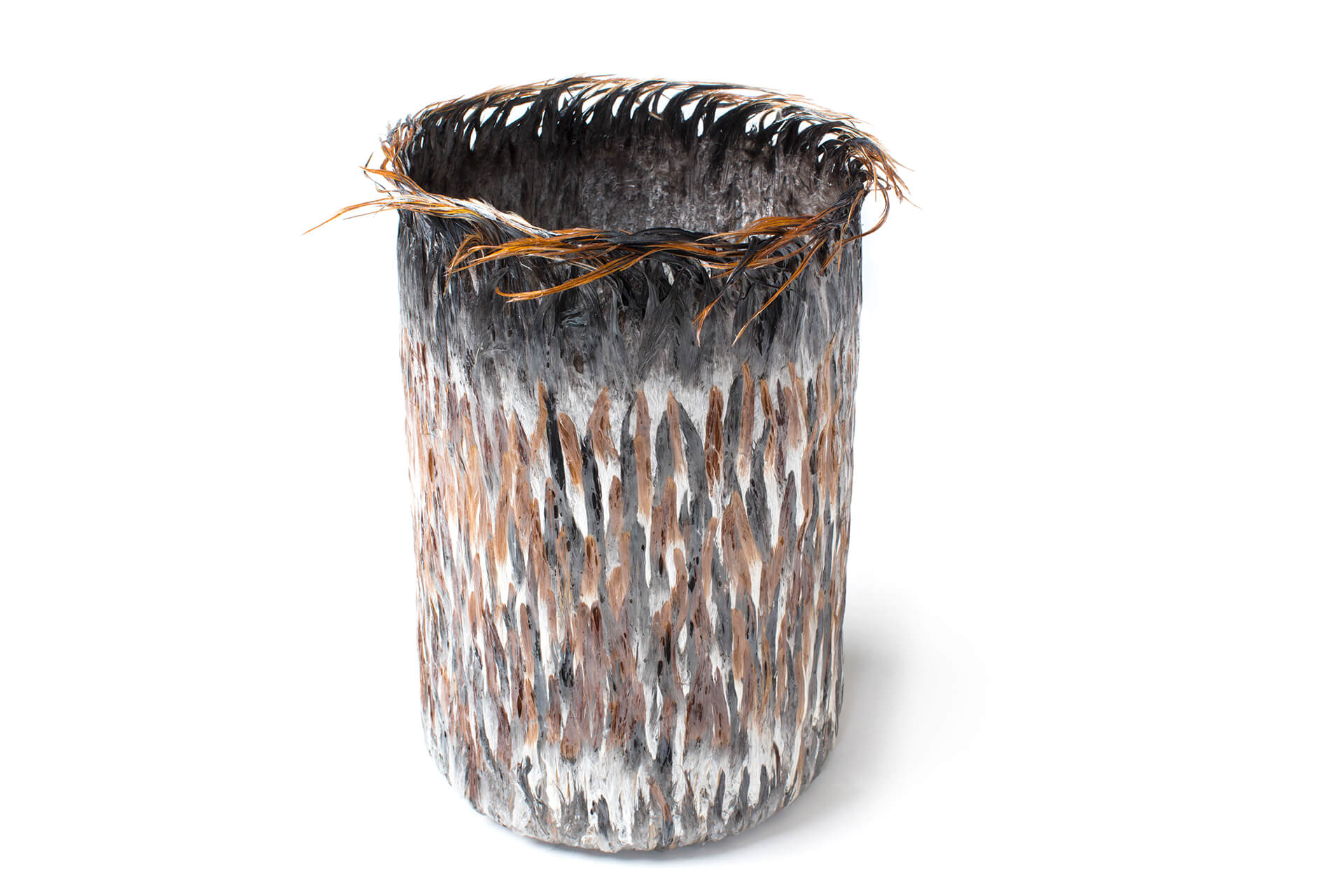 HOW IT’S USED: A high protein content, low thermal conductivity and waterproofness make feathers a technically impressive natural material. Being a by-product of the poultry industry, large amounts of feathers go unused and discarded – West used those from a farm in located in southwest Finland for Plumology. Mixing plumage with wood-based nanocellulose, the designer crafted sturdy, biodegradable object prototypes that pose an alternative to waste.

IN PRAISE OF INDIGO 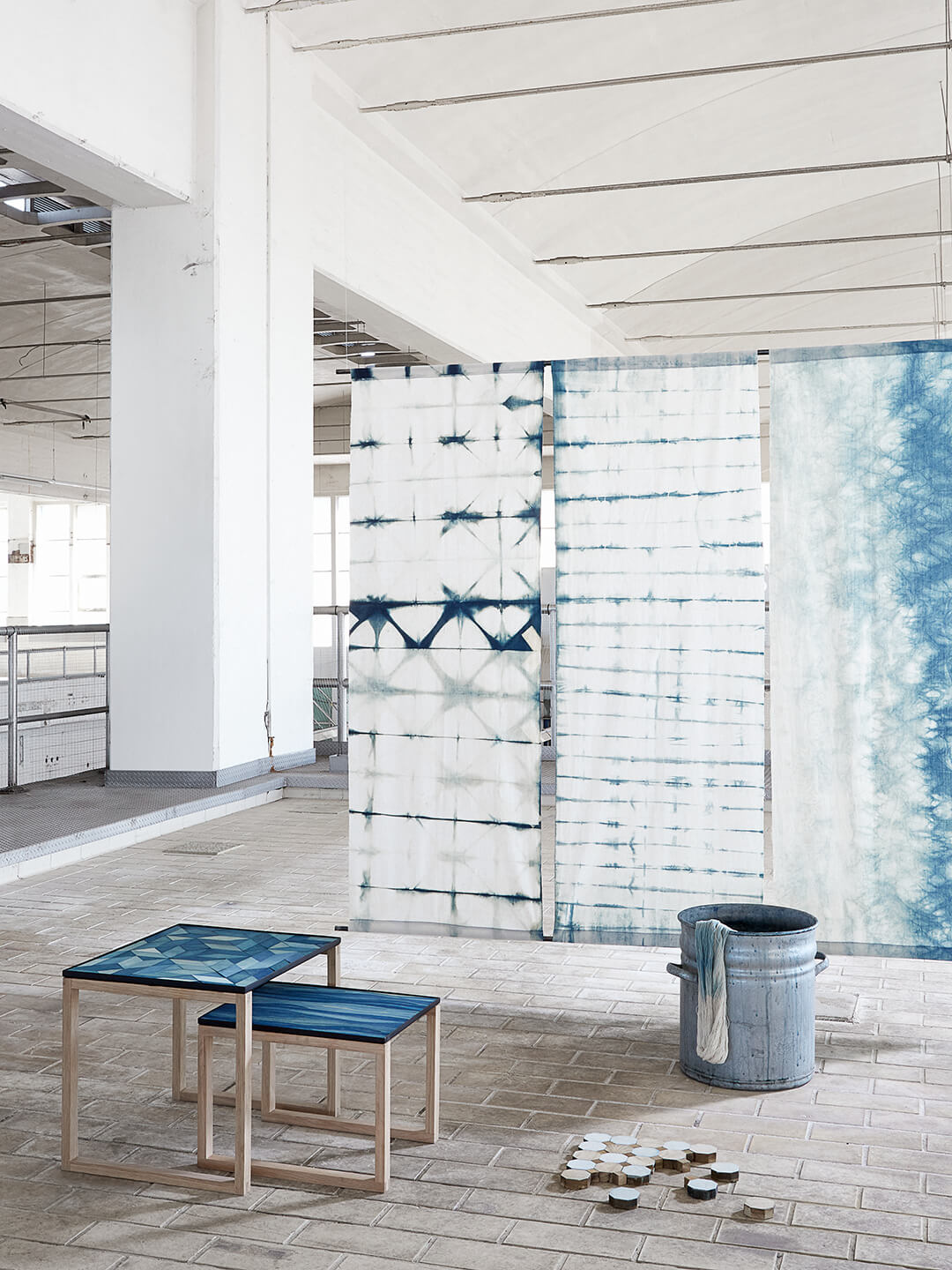 HOW IT’S USED: Asking herself how indigo-dyed products could be brought into more homes, Le Grelle set out to adapt traditional, natural dyeing techniques, experimenting with the pigment’s range of hues on textiles and wood. ‘Reviving the use of indigo is a way to revitalize the fascinating cultural heritage attached to it,’ says Le Grelle. ‘It also encourages supports sustainable production methods with its artisanal approach.’