Brick by brick, Aesop has built its new store in Brussels

As the saying goes, elke Belg wordt geboren met de baksteen in de maag – every Belgian is born with a brick in the stomach. The phrase has to do with their hunger for real estate as a safe investment of sorts, but it also reveals something about their shared design psyche: there are few things more Belgian than the humble brick.

That’s why, when asked to conceive a local spatial identity for the new Aesop store in the country’s capital, city native Bernard Dubois turned to the 2-cm yellow briquette – top to bottom, left to right and all over. 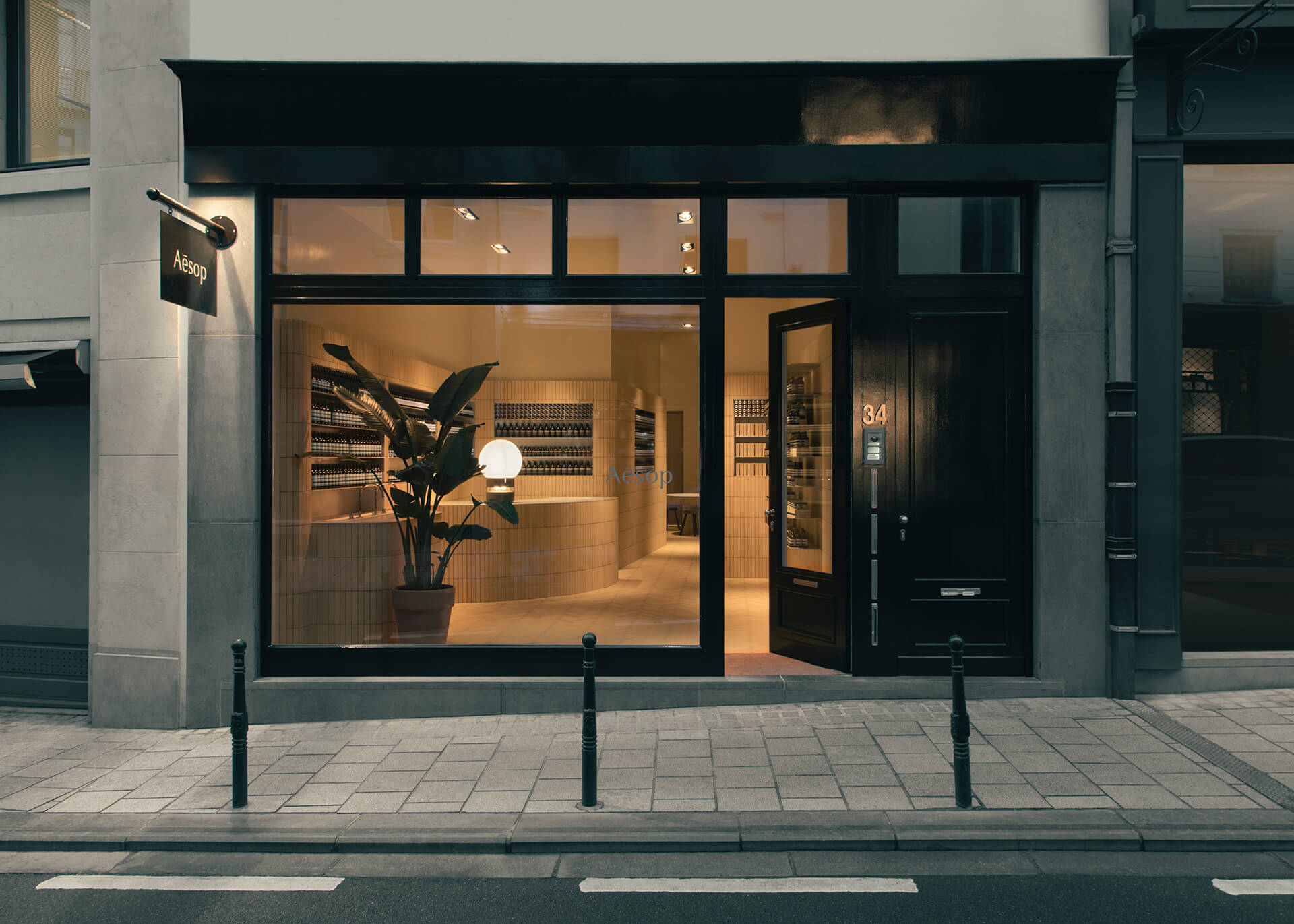 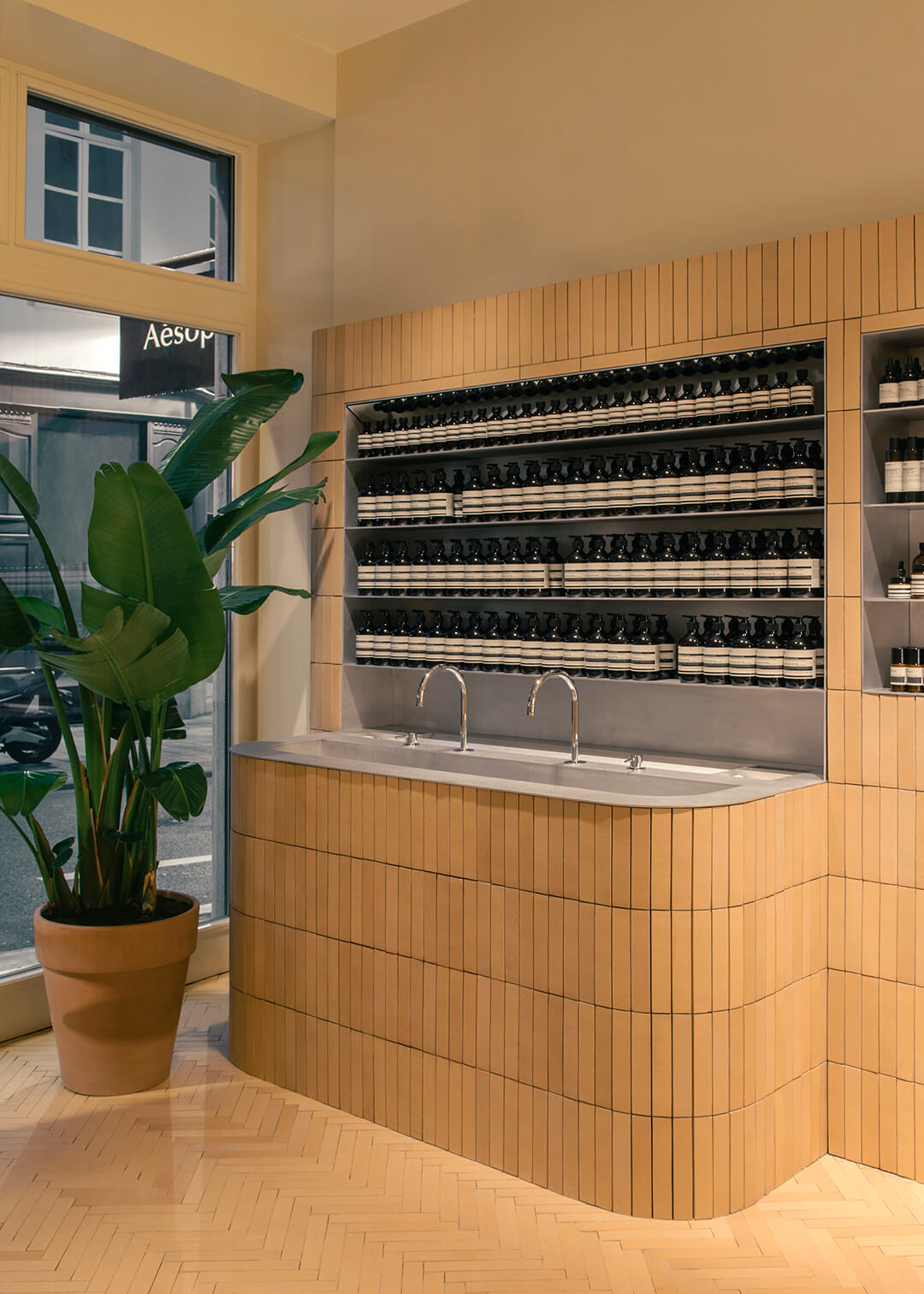 There’s something very familiar about the new store: it might seem – specially to Dubois – that the city, the country and the region are built out of bricks. Down in Ixelles, some four kilometres away from the rue de Namur shop, is Henry Van de Velde’s Wolfers House, with its rich 90-degree curves. Mallet Stevens’ celebrated Villa Cavrois is a few minutes outside of Lille, near the Belgian border. And here in the Netherlands is Berlage’s grand Gemeentemuseum in The Hague, a masterpiece that turned yellow brick into yellow gold. ‘For me, it's kind of regional because it feels like the way we live: we don't live with borders and travel all the time,’ he explained.

And yet, there’s something very un-familiar about the store: most of the briquettes seen in the Benelux are used on façades and placed horizontally. Instead, in order to make the scale work and thus achieve a higher degree of plasticity for the curved corners, Dubois decided to place most of the pieces –  nearly 10,000 of them – vertically.

But then again, that’s just his way of working. ‘In the 20th century, we saw a series of revolutions that gave birth to forms with big ideologies behind them… but in the 21st century, these forms can be used almost like a catalogue,’ explained the architect. ‘These ideologies from 20th-century narratives don’t apply anymore to this new world – it’s not completely Western-centric anymore, with the rise of China. So it’s interesting for me to play with the codes of modernist and post-modernist architecture to create something that looks coherent but refers to different movements in a way that you can’t say it’s specifically modern or post-modern. I love playing with these ambiguities.’ 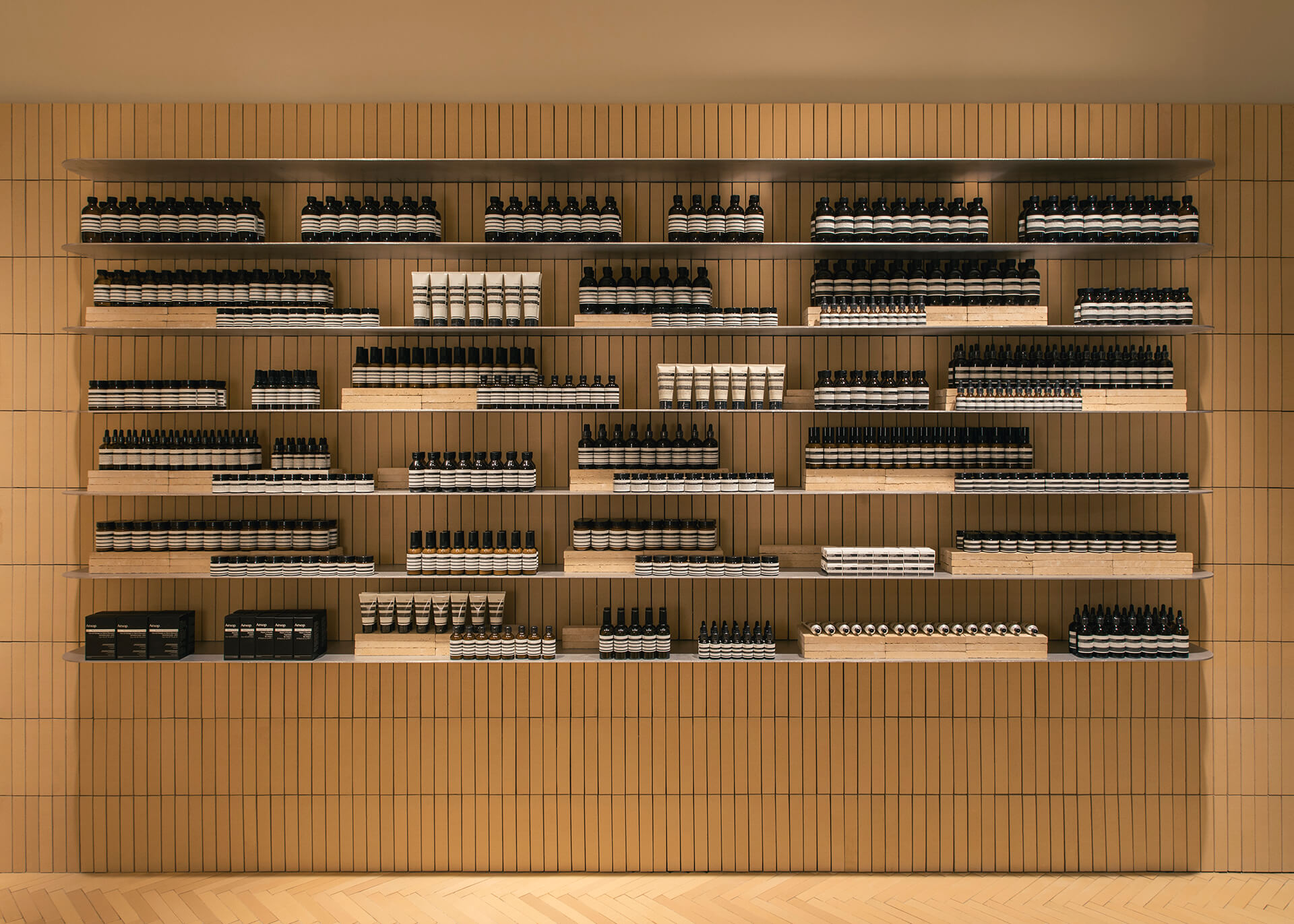 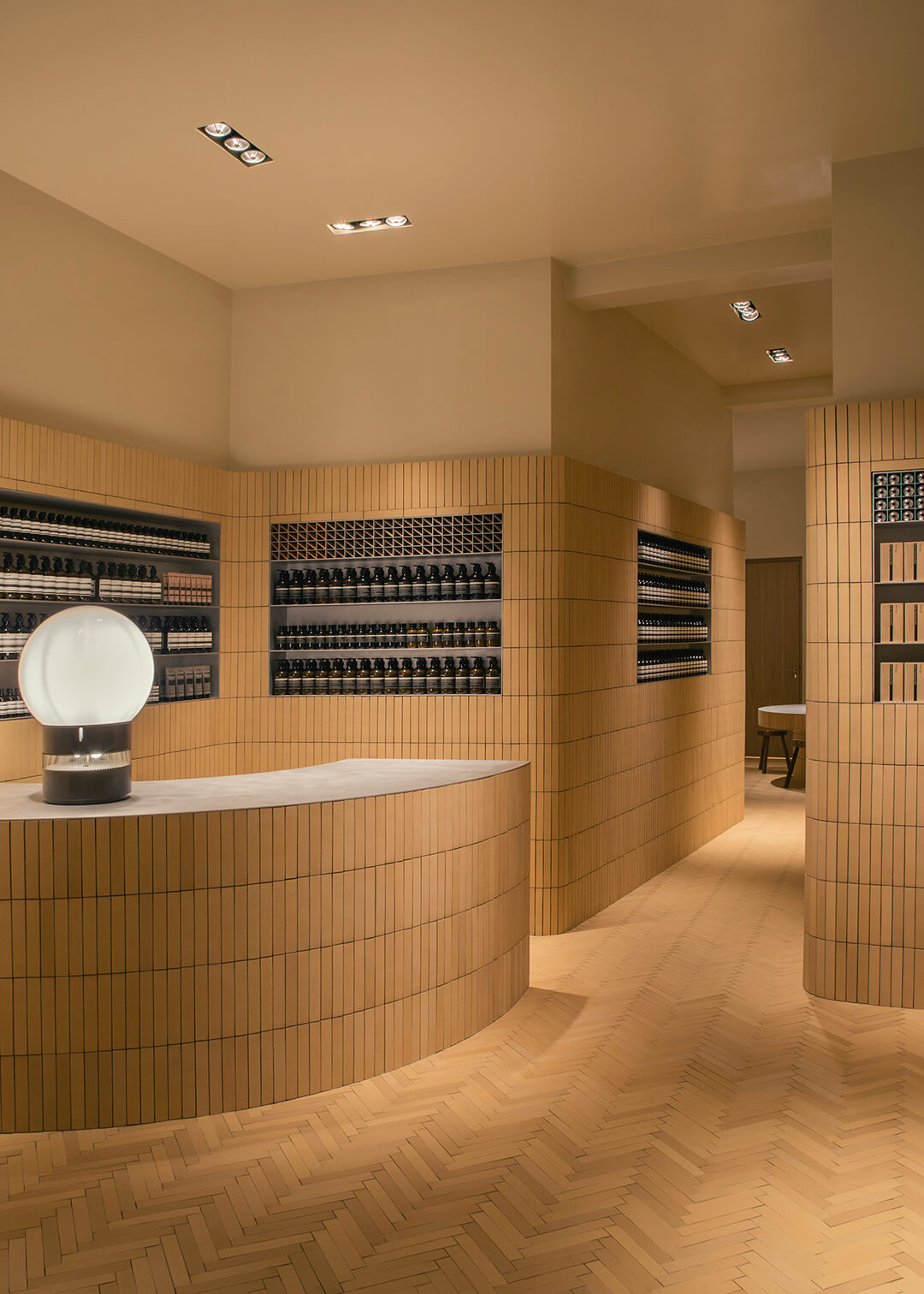 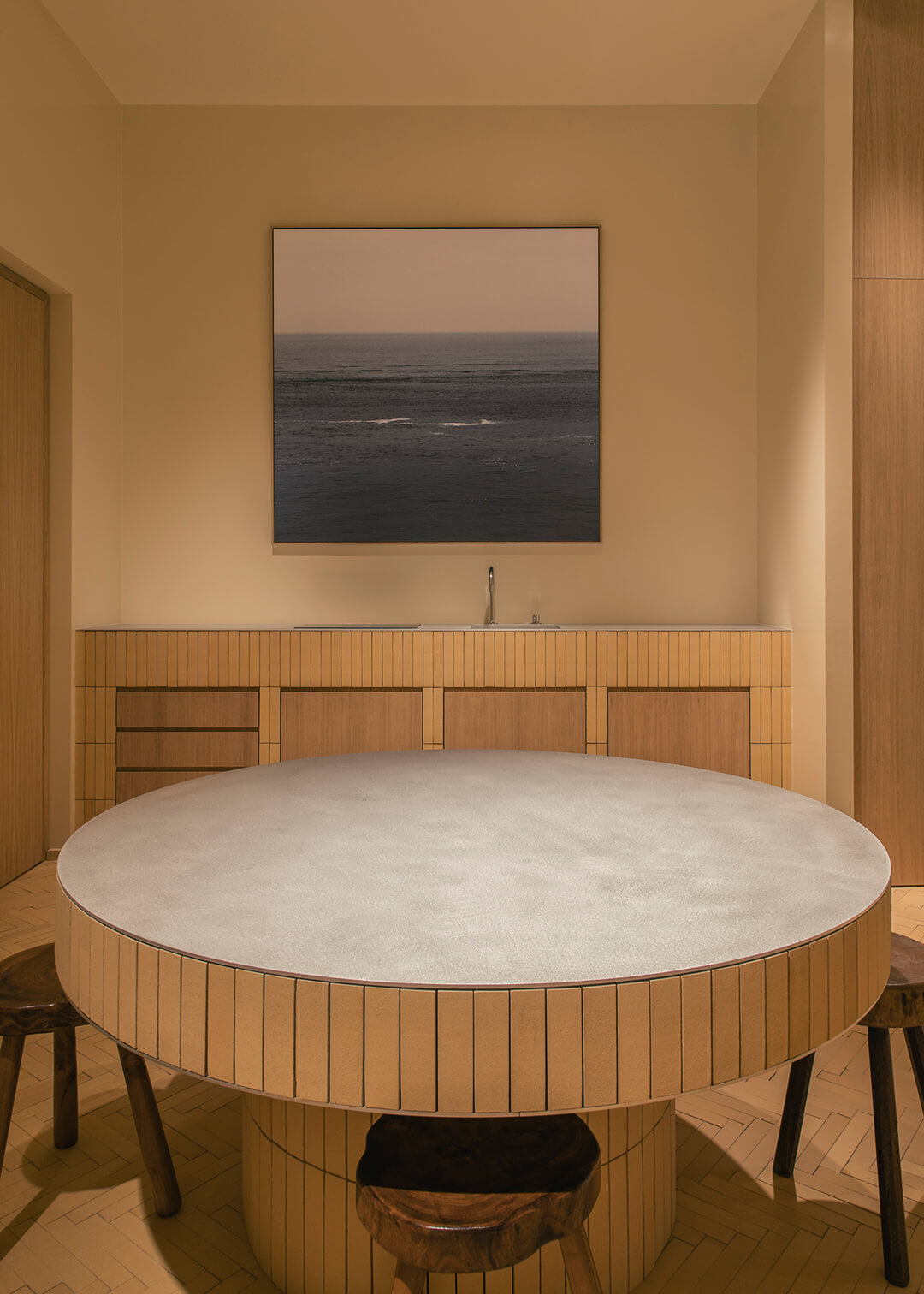 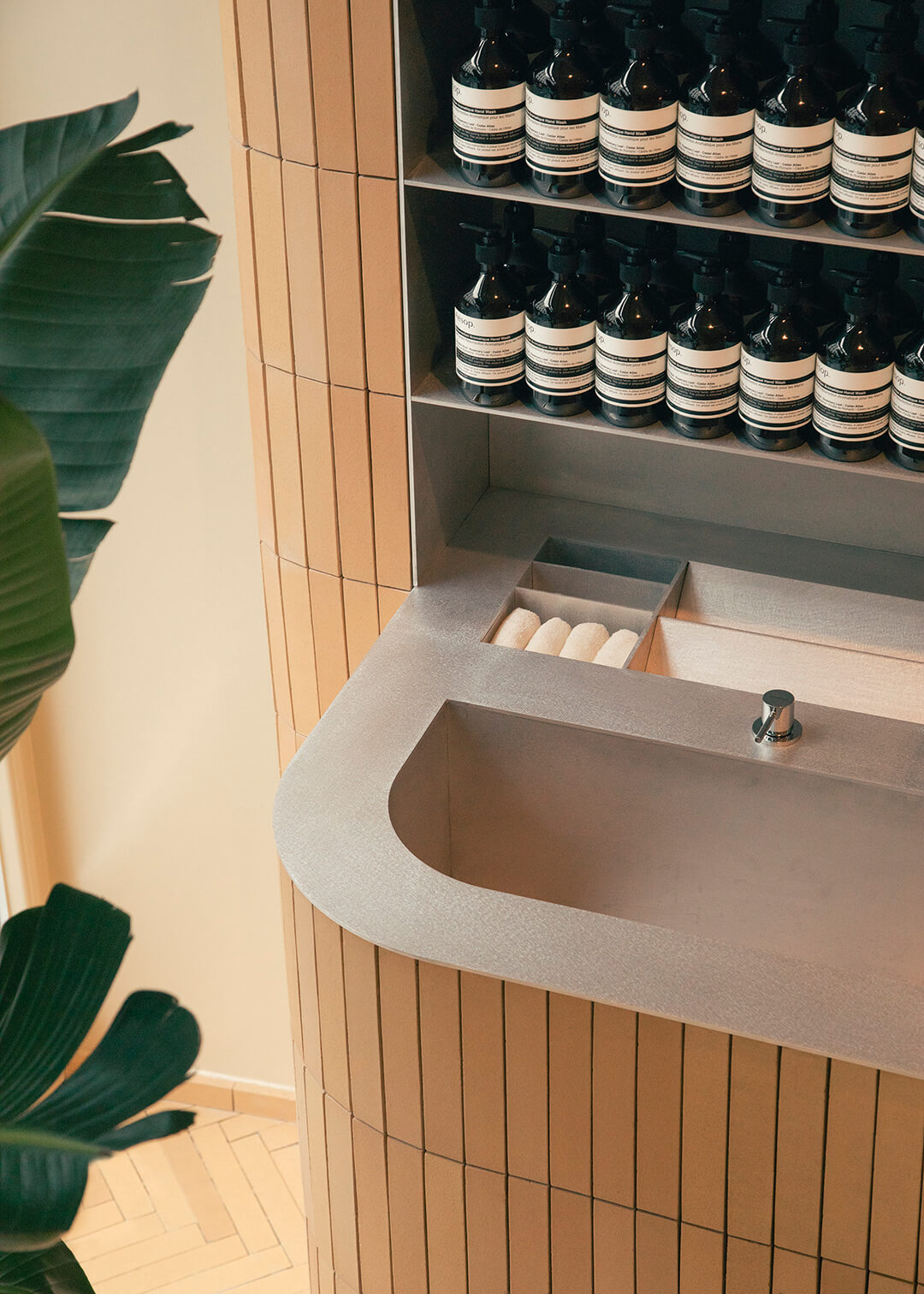 That’s why, even though Aesop’s modus operandi asks architects to think local with their design proposals, Dubois’ concept extends far beyond his own city. The hand-cut briquettes, for example, came by way of Flanders and were assembled together with cement-less joints, in a way that references East Asian construction. The centrepiece Gae Aulenti table lamp, which was also used by Snøhetta in the Duke of York store in London, is a nod to the late architect’s flexible position in the design timeline of the 20th-century. ‘I like the variety of time she worked in, before and after the 70s… as she stood in the middle of a moment of change, at one point, she turned post-modernist,’ he remarked. And while the hanging photo of the North Sea, taken by Dubois himself in Ostend, might be a literal and poetic showcase of the country’s collective memories of summer holidays, it’s actually inspired by Gerhard Richter’s oil paintings of bodies of water split by the violent punch of the horizon.

In other words: Dubois thinks of his hometown not as a city unto itself, but as a small part of a much larger region where cultural lines are blurred enough to be claimed and shared by many – indeed, he lives without borders. And certainly, in these times of right rise, few things stand for the beauty of Brussels like that line of thinking.