Daan Roosegarde is a self-professed amateur when it comes to outer space. But, as a designer, the allure of utilising new material while solving a ­literally universal problem was one he could not resist. So, when it became clear that the 8.1 million kilos of space waste in the periphery around our planet could have redemptive use instead of becoming a global threat, the artist-designer-architect became a student again.

When he and his studio first experimented with the initial iterations of the Space Waste Lab project, the lime green lasers that shot into the sky were reported as UFO sightings. The performance, which spews LED lasers upward to track the location of the space waste in real time, is what the studio calls Phase 1. At the recent world premiere of the project at the Kunstlinie Almere Flevoland, located 30 minutes outside of Amsterdam, over 8,000 people showed up to see the lasers-turned-alleged-UFOs. As the sky went dark, they shuffled outside with their beers and bitterballen toward a raised platform equipped with the cameras and software needed for the execution across the Weerwater, the artificial lake the KAF sits on. 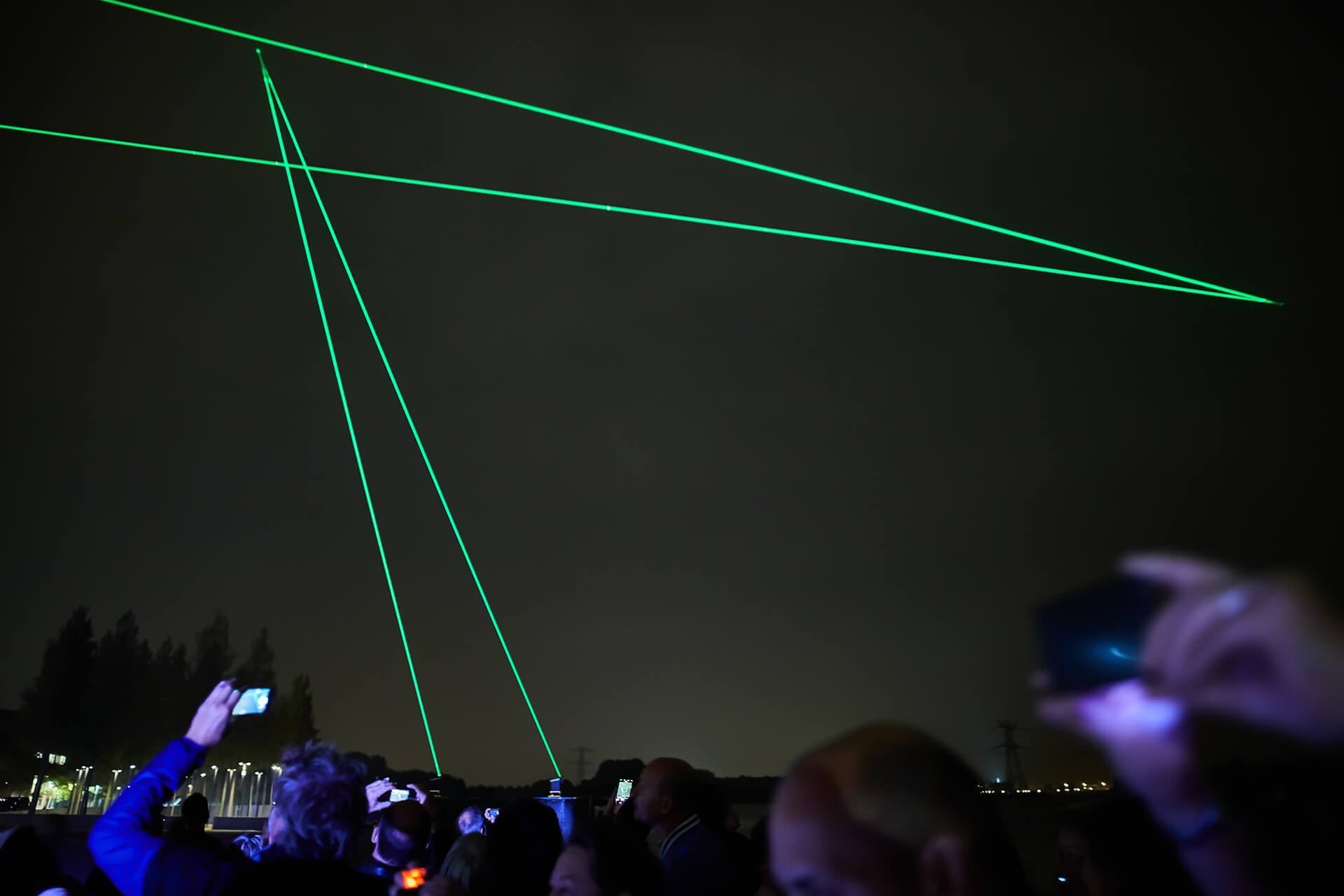 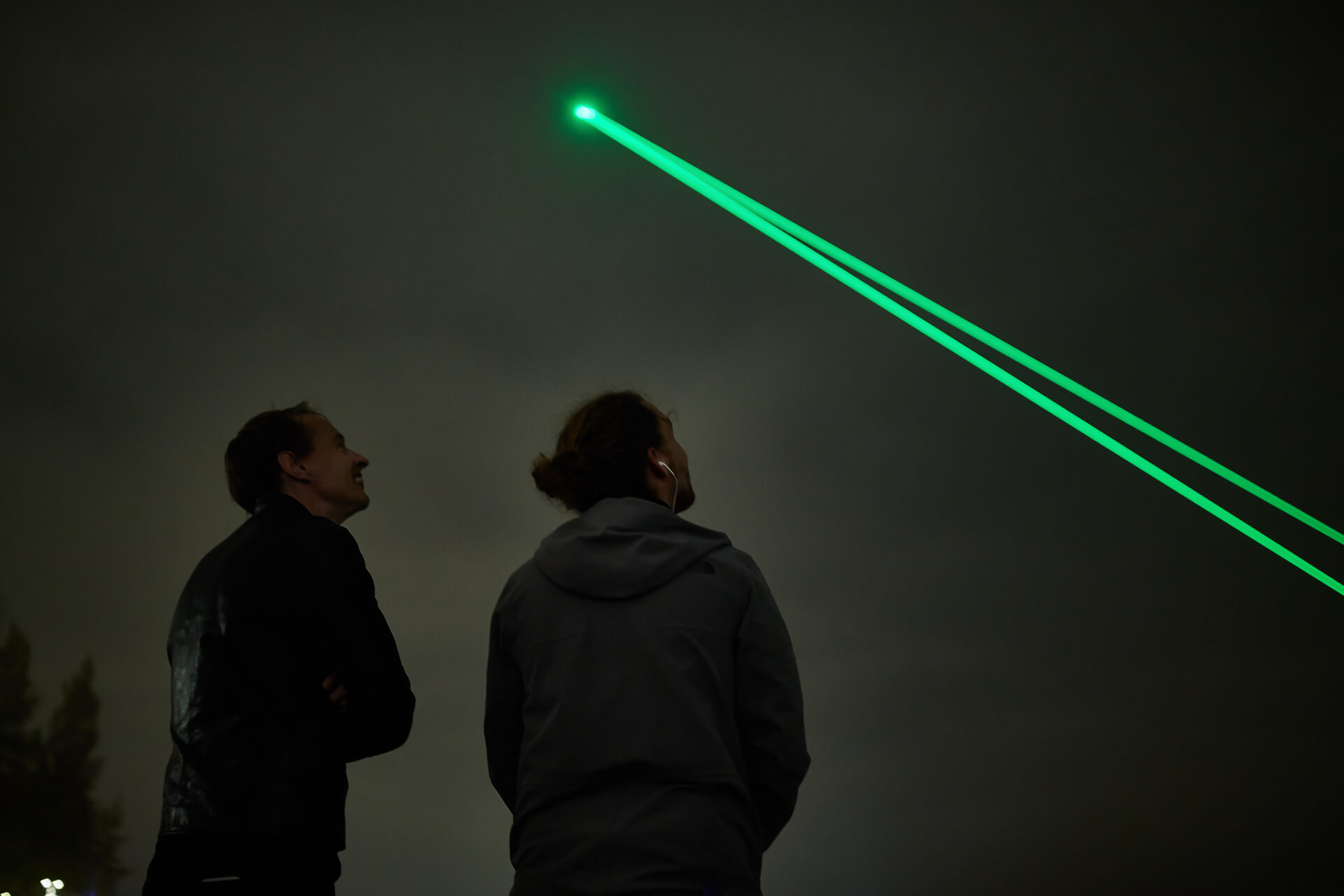 When the beams of light finally shot up, a collective ‘Ahhhhh!’ held powerfully in the air: a sign that this was what many had been waiting for – a palpable visualisation of what we could not see, figuratively and literally.

Projects like Roosegaarde’s are leading in democratising the public understanding of science and our future world through design.  Together with the European Space Agency, he is to explore the parameters of what the Space Waste Lab can become. Phase 2, which will be announced early next year, is a multi-year program that aims to understand how the capture-upcycle process can work, and experiment with what the sustainable products made from the waste can become.

Since founding Studio Roosegaarde in Rotterdam in 2007, he has recruited a formidable team of engineers and designers that work to connect people, space and technology while creating future landscapes. That bred proposals such as the Smog Free Project and Waterlicht, both of which have an innate relationship with and respect for our natural world  –  but as Roosegaarde admits, required a great deal of control and attention to detailing. This one, though, was marked by experimentation from the beginning. ‘It’s the first project where we started with a question,’ he explained. ‘That makes it a bit scary for me as a designer, but I think it’s the only way of fixing this. It’s a journey.’

When the Space Waste Lab started and you imagined the possibilities, what did the process look for you and your team?
DAAN ROOSEGAARDE: It’s very simple: we have created the problem, so in a way, it’s sort of bad design. We can do two things: we can complain – we’ll blame somebody else  –  or we can say ‘We have created it, let’s design and engineer our way out of it.’ I would prefer to focus on the second option. We’re not trained to think in circles like nature does. 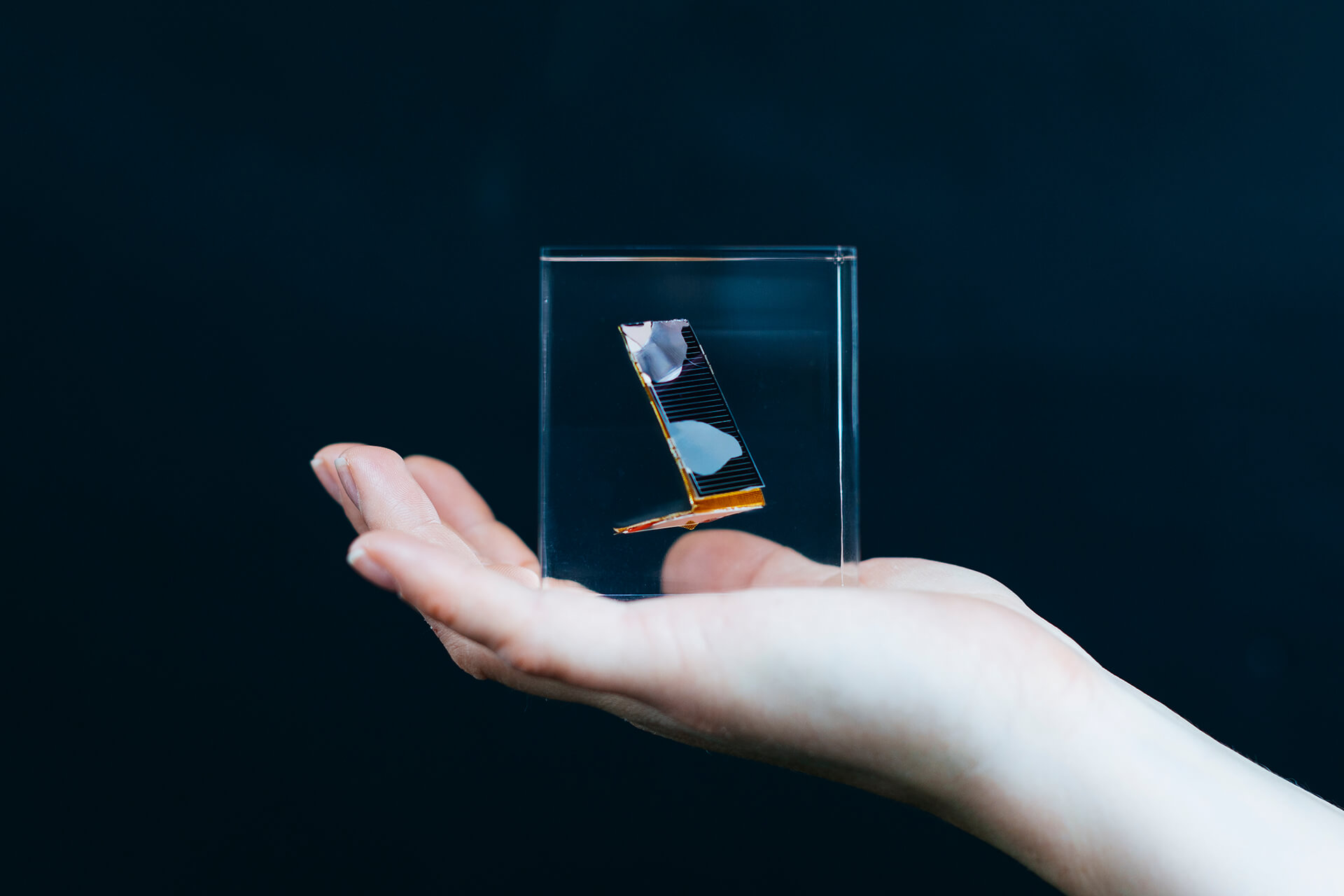 Design can add a new perspective to what space waste is: Is it waste or is it an ingredient?

We’re on a mission for clean space. I don’t think I’m smarter than ESA or NASA, because I’m not – they’re really smart people. But what I do think design can do is add a new perspective, a new value, approach and strategy to what this is. Is it waste, or is it an ingredient? The mission is first of all awareness, then capturing, and then, in the end, upcycling it into something new.

It’s been fascinating in the last few weeks to get feedback from communities. One of the reasons I’m here in Japan right now is to meet the start-ups. They start emailing and calling us, so you’re building up a sort of community of solutions – crazy scientists with brilliant ideas are emailing us. That’s where we’re at right now.

Can you see the space waste being used in interior design and architecture?
For sure – but it would be expensive to bring it to Earth. Either we can use it in space, like on Mars, which would be logical, or we track it here to create some kind of performance like constructed falling stars, or fireworks.

Recently, I was talking with Adrian [van Hooydonk], the head of design of BMW. He showed me the design of the BMW i3 – what they did was quite radical. When you design something, as he explained to me, there is always an upside and a downside to the material, in a physical way. The upside is polished, nice to look at. The downside is a bit rough, not polished, untreated. What they did is take the downside of, for example, a chair, turned it around, and made that the interior. You look at the interior of the car, and there’s this recycled grass, it’s a bit rough. They took what was already there and transformed it. I like that kind of thinking a lot.

I think the notion of what we do in space has an influence. If you talk about the architecture of Earth, it’s all about communication, our wireless, our Internet, our 5G – they affect the architecture and buildings and materials. With the space waste, the building block has a microchip that says ‘I’m old, I’m new, I’m cold, I’m warm, I’m in danger, I’m safe.’ These materials that are up there in space, we ship them for billions of euros there, very precious materials and high end, but they are rough. I do think it will lead to a new aesthetic, a new type of performance, also in how you produce it – you cannot use a welding machine in space, or it will explode. You have to build up a new set of ABCs, a new grammar. Space has an incredibly important role in this notion of communication on Earth. 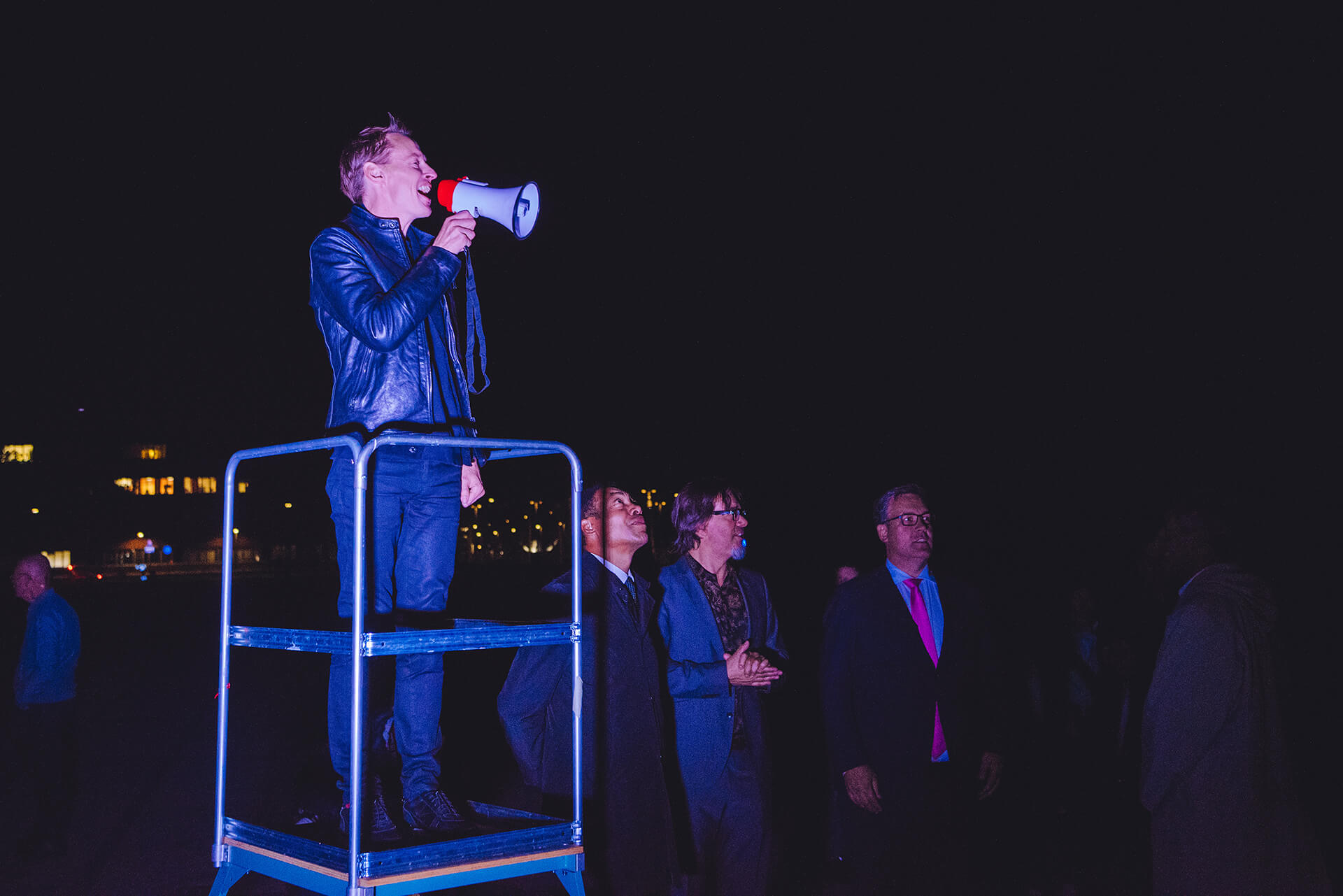 So, here’s the inevitable question: Would you like to go up one day?
I’m going to! Next year, with Bloon, a space group based out of Spain. The idea is that you go to the stratosphere, about 40 kilometres up. Their concept is that if you are there, you can use launch satellite missiles that are smaller, cheaper and require less fuel because you are already further out of the atmosphere. To raise money, you can book one night for a capsule that fits four travellers.

It maybe sounds a bit Wild West, but what I think is important is that we challenge each other. We’ve all seen the United Nations report, the state of the Earth: the trillions of dollars we have to spend to make our cities liveable. We are designing, unconsciously, our planet, with our CO2 emissions and our traffic jams. What do we want our world to look like? 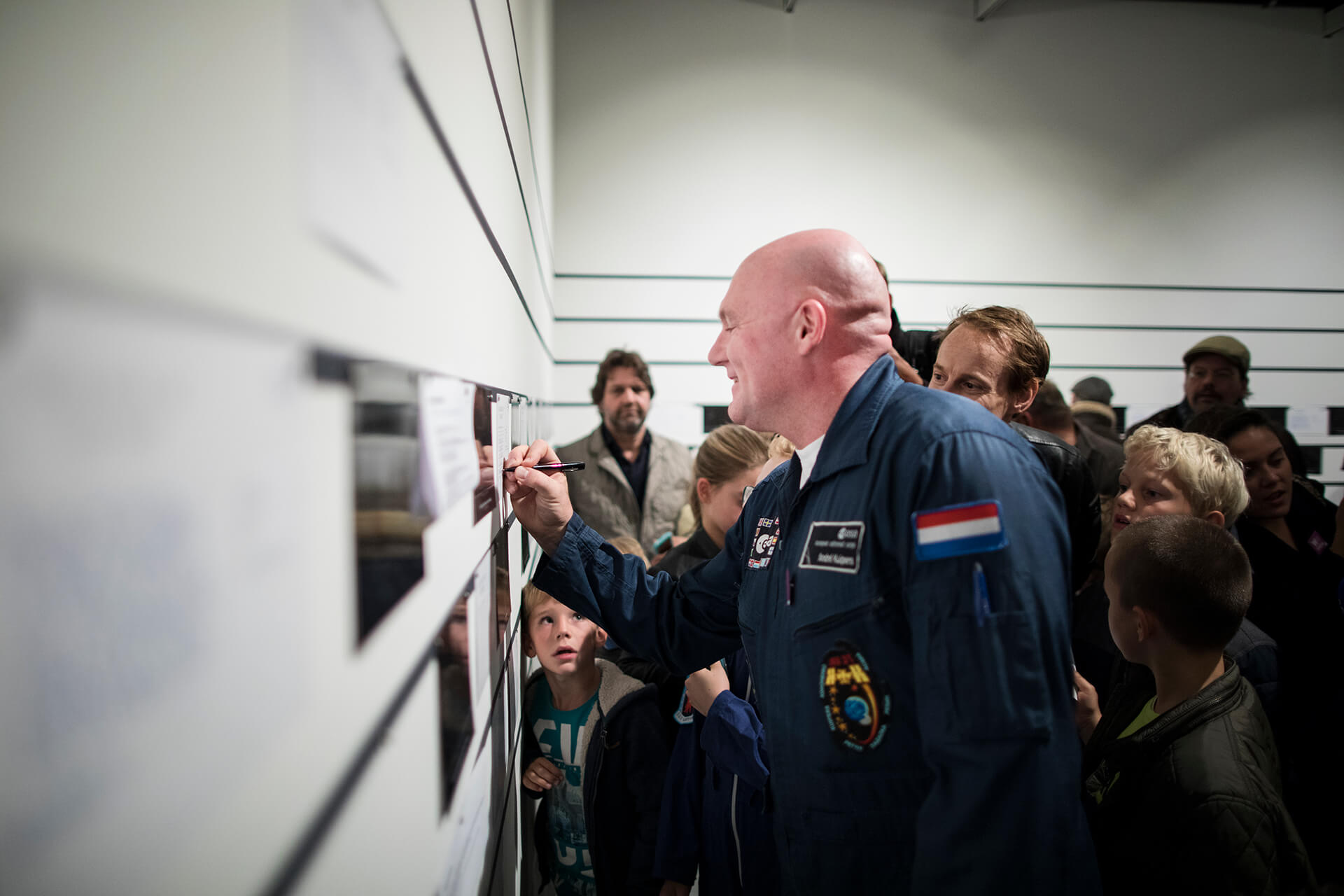 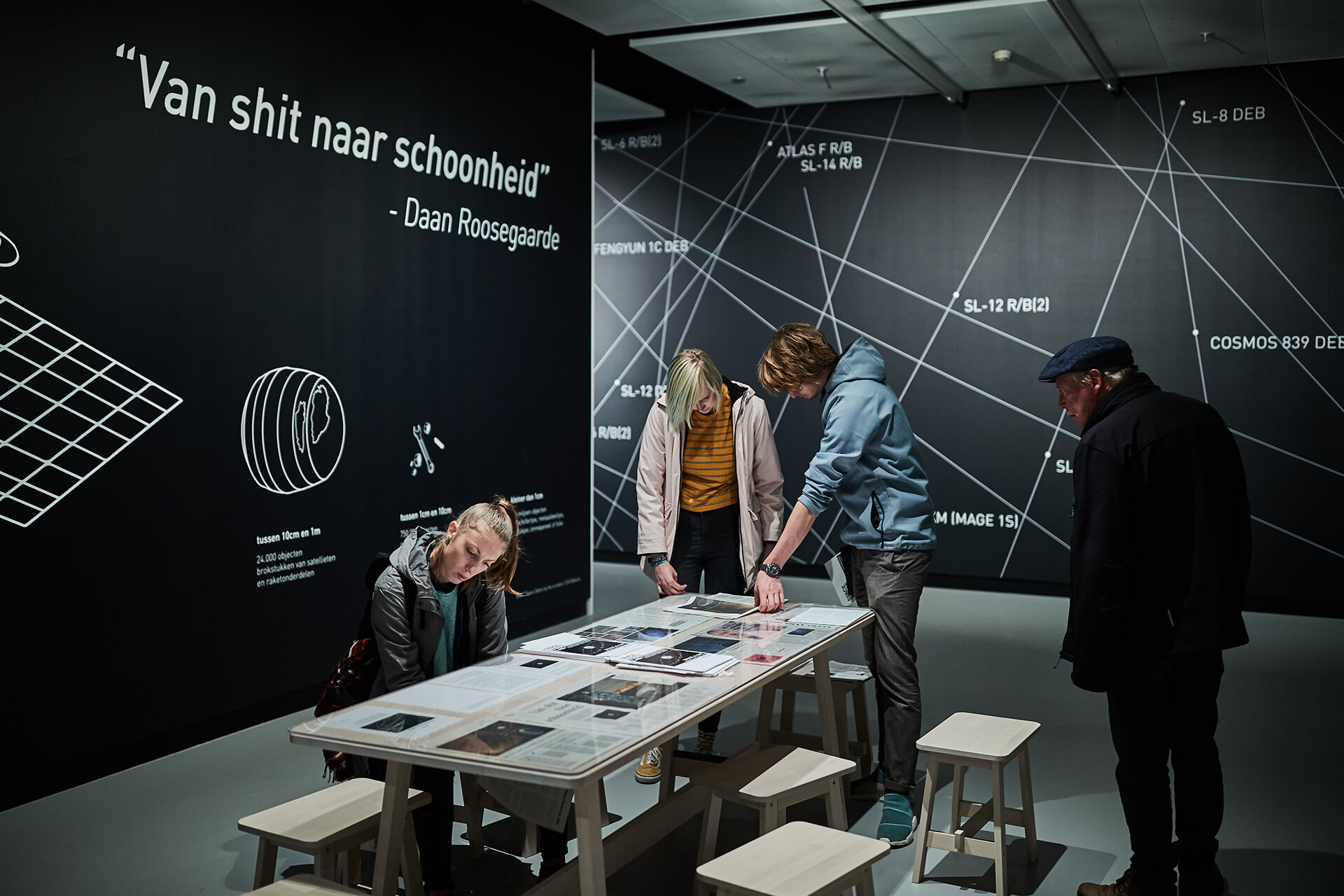 Schoonheid, the Dutch word for beauty and cleanliness, is a recurring concept in your work. In your work, though, the definition becomes much more aspirational. What does it mean to you? How does this, and how this inherent sense of Dutchness play into what you do?
I think that this cleaning up space is the natural next step in this notion of schoonheid: clean air, clean waste, clean energy. Although it may seem very far away, it is still something very intimate. Schoonheid means that there’s a we: I do it for the world, because I try to improve it, in my own little way. But there’s also a me: I do it because I want to, because I’m interested in it. There’s a personal fascination and there’s a collective fascination.

There’s good craziness in this

What’s interesting in the Netherlands is that we live with nature, we fight with nature: we’re below sea level. We try to find the notion of harmony, and this is in the DNA of our landscape. Everything that you see is designed, every tree that you see is planted. About 1,000 years ago we decided to design the Netherlands – we didn’t move to Germany, we stayed. My Chinese friends are saying: ‘Just move to Germany, don’t do this. It’s dangerous.’ But there’s good craziness in this. As Rem Koolhaas would say, it’s ‘Pragmatism so distorted it becomes pure poetry.’ I feel like a part of that landscape tradition: if you look at the Van Gogh bicycle path, or Waterlicht, you can see that. If you give space to people in a physical way, they start to occupy it, to personalise it. 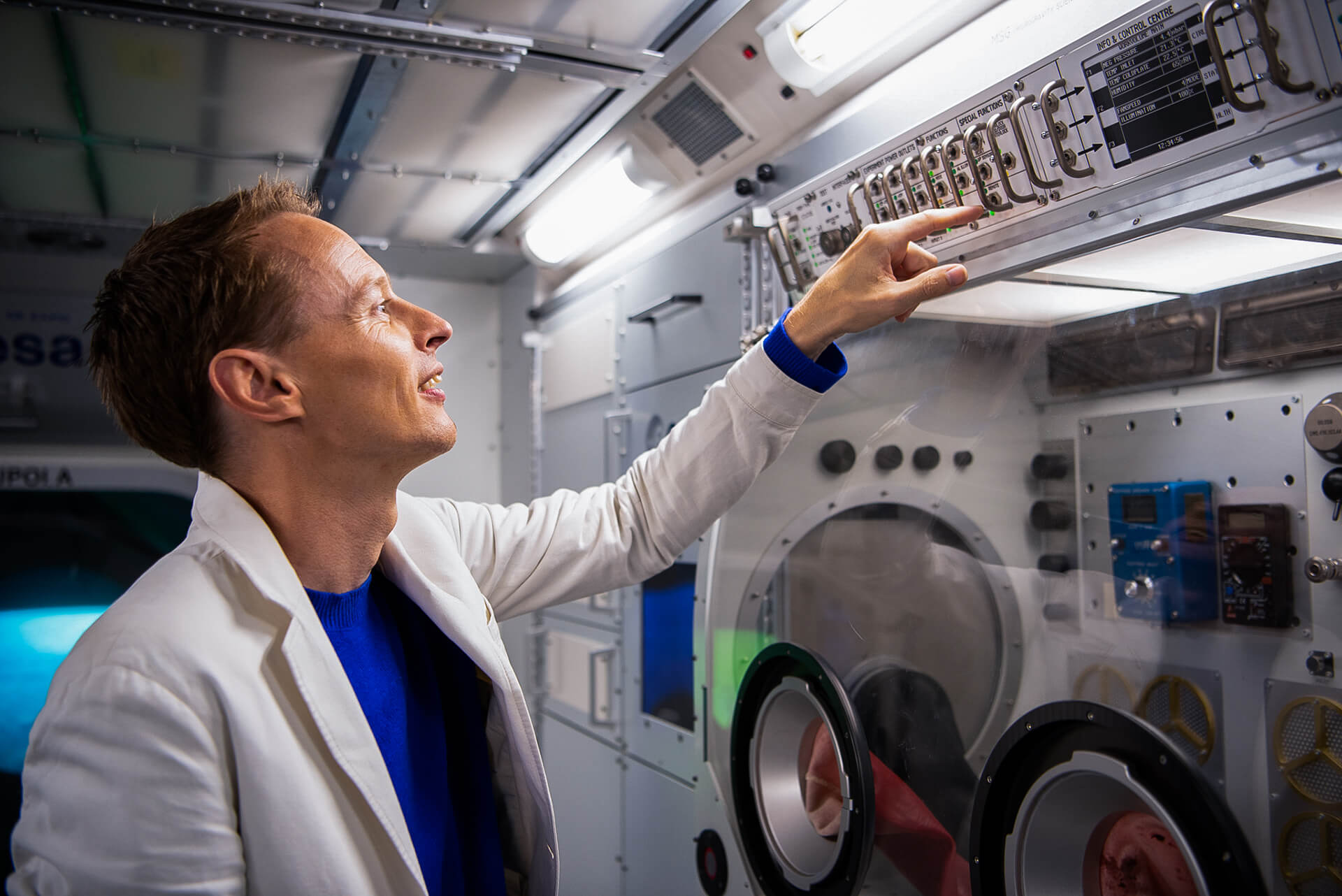 When you were a child, did you ever answer the question ‘What do you want to be when you grow up?’ with, ‘An astronaut’? Could you have imagined this trajectory for yourself?
When I was 16, my parents and my teachers asked what I wanted to do. I said I wanted to do something with art, design and architecture, and I wanted to travel, and I wanted to start my own company… everybody got really worried. For two weeks, they did educational tests, and after two weeks, the results came in: the conclusion was that what I wanted did not exist. [Laughs] For one day, I was really depressed, and then the next day, I woke up and decided I’d just do it myself. That’s the power of a designer: he or she can imagine something that’s not there yet, and then design it, build it. That kind of imagination is incredibly powerful.

At the Space Waste Lab, I showed JFK’s 1962 moon speech: ‘We choose to go to the moon, not because it’s easy, but because it’s hard.’ Every time I see that, I get goosebumps. A few weeks ago, I was at the Mayan temples in Mexico. What’s very interesting is that they looked at the stars, and built their own reality, to define their own architecture. In a way, the astronomers and the scientists were the architects, interior architects of that time. Somehow, we forgot to look above again. Maybe if we start looking up again, we’ll have answers and new solutions for the world we live in.

This interview has been edited & condensed for clarity.

The Space Waste Lab exhibition is open at Kunstlinie Almere Flevoland from 5 October 2018 to 19 January 2019, with live performances on 9 and 10 November, 7 and 8 December and 18 and 19 January.