The New York-based architect explains how the hospitality industry can use design to become more resilient.

Following the creation of his DineOut NYC initiative, David Rockwell discusses how designers can respond in time of crisis, generating atmosphere out-of-doors and the new rituals that will define dining for years to come.

You’ve seen New York go through several tragedies in your career – how has that helped you respond effectively to the pandemic?

DAVID ROCKWELL: It's a question that really began for me in 1994, when many of my friends and also my brother succumbed to AIDS. It devastated the artistic community in New York. At that time I discovered DIFFA – Design Industries Foundation Fighting AIDS – which grew out of that crisis. They invited me to participate in an event they were having. It was a marketplace of shops, and I created this one small library within it. As an office, our participation felt like a chance to take the pain and the frustration of this tragedy and apply some of the optimism of what designers do, which is to build something that will make difference no matter how small. It was a wake-up moment for me – this idea of turning anguish into action.

The action that I think has always been in my DNA goes back to finding ways in which people can connect. Cities are really like theatres; if you go to a theatre when there's no performance or actors, it's an inert art form.  Cities are not defined by their hardware, their buildings; they are defined by the life that happens on the street. New York is profoundly like that. It's a great city where no one agrees on anything, but everyone shares the streets. I ended up becoming chairman of DIFFA for 12 years. That was really my first taste of understanding how you could use design practice to make a real difference. 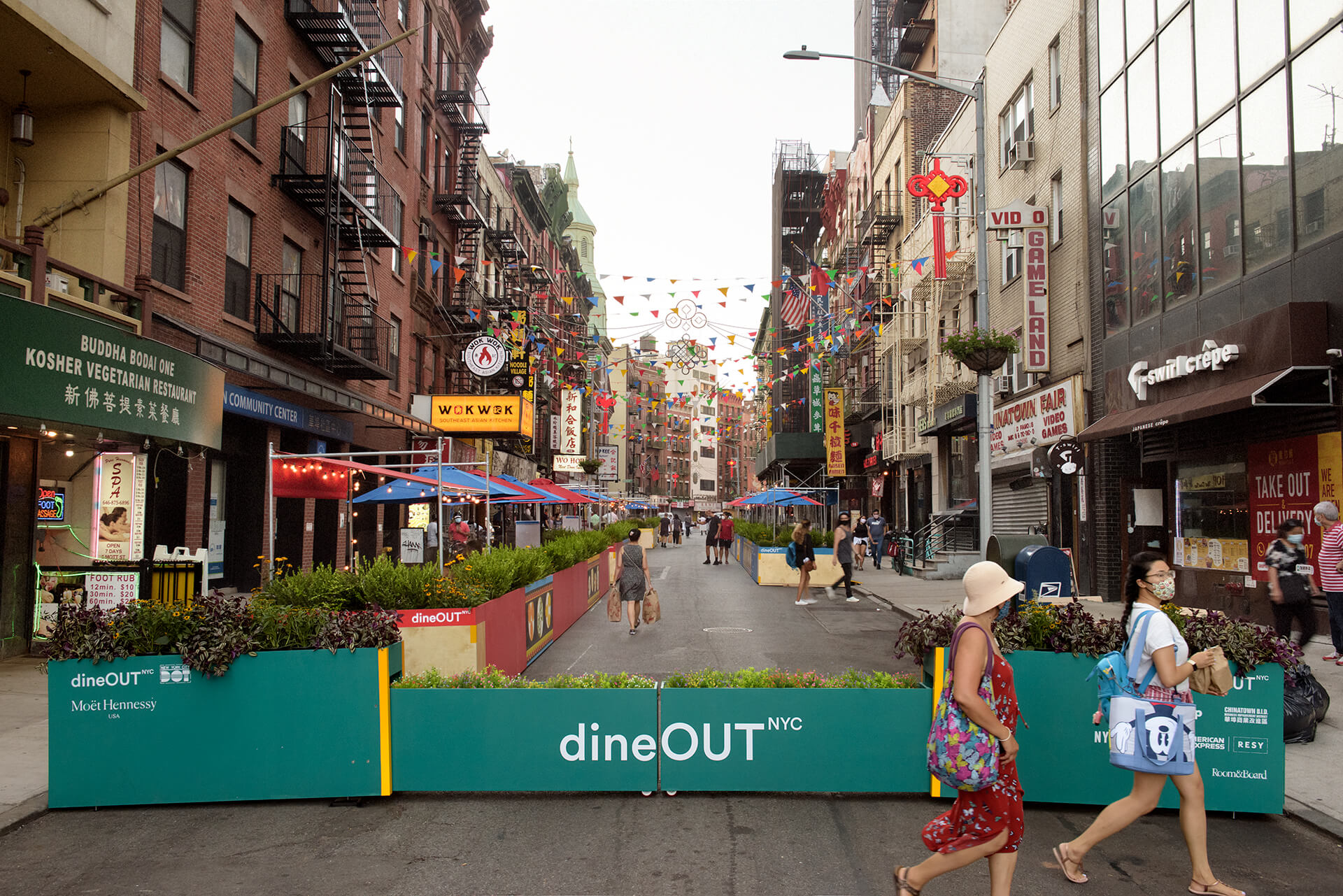 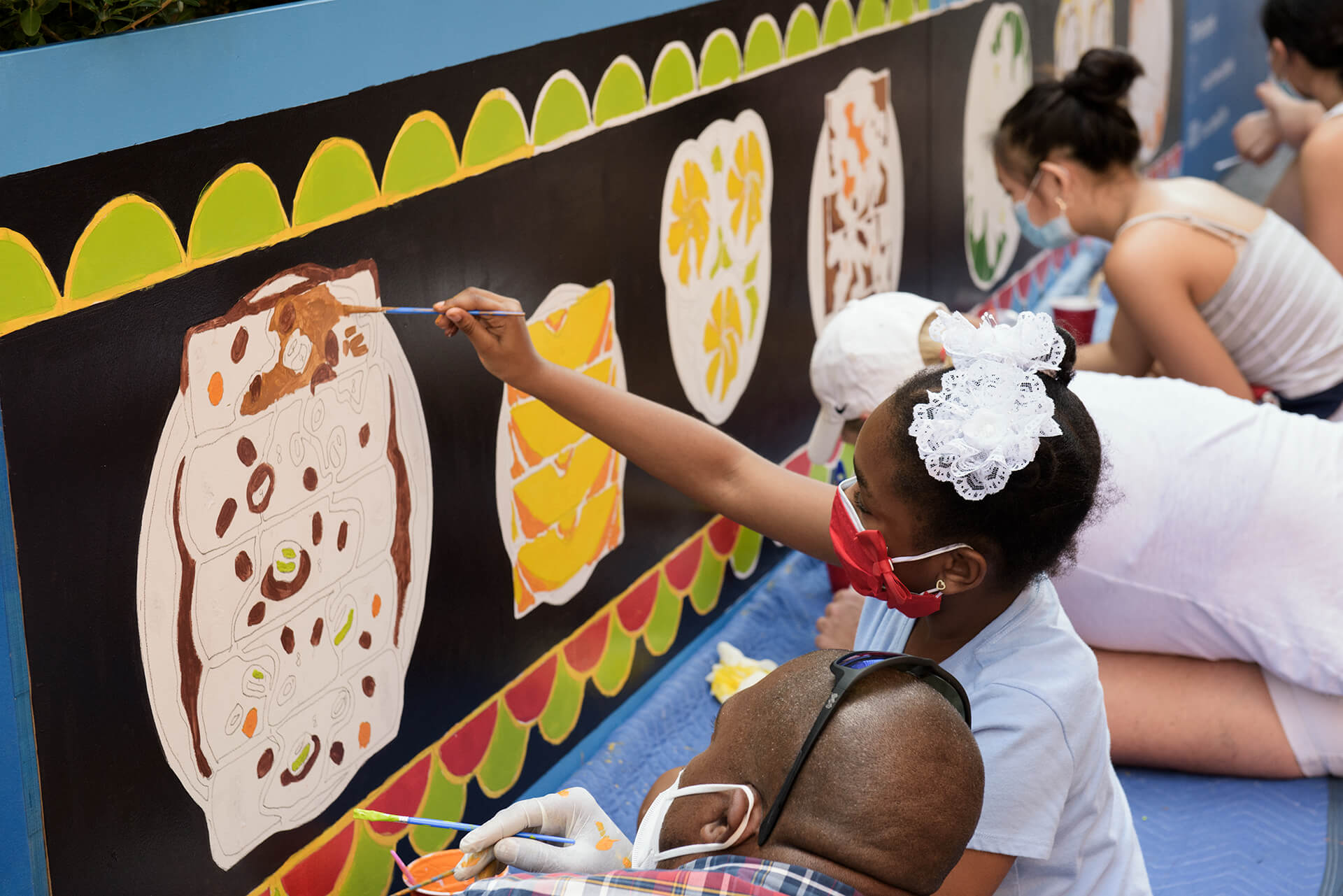 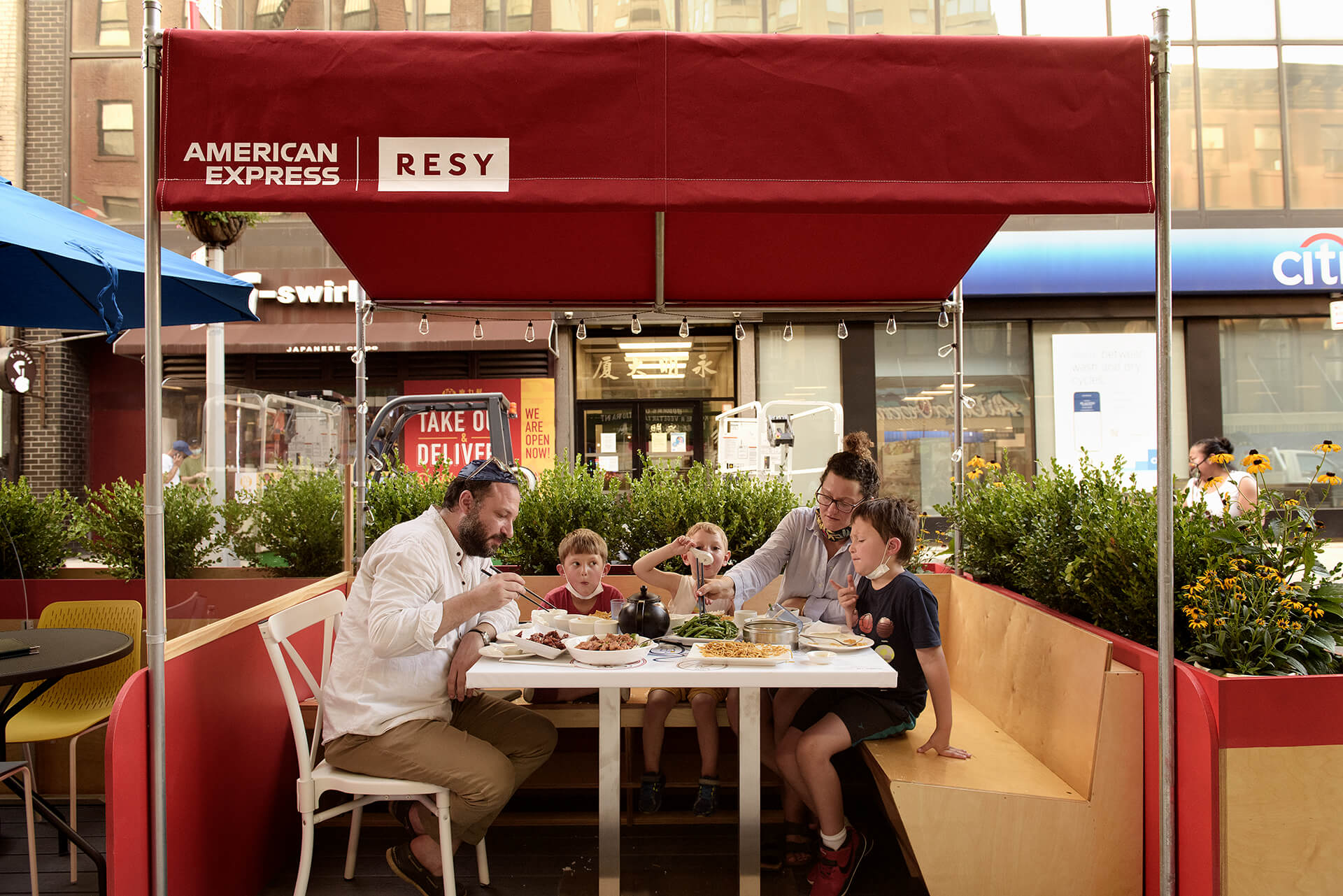 When 9/11 happened, it had a paralyzing effect on our studio. We were getting ready to open up the Mohegan Sun casino in Connecticut, which was the biggest project we had ever done by a factor of ten. We were in limbo. So we switched to trying to figure out how creating places that offer connection and pleasure could be relevant to this event and the huge gaping scar it had left near our office.

I got a phone call from the principal of PS 234, which is one of the best public schools in the city and situated right by Ground Zero. The school had to move to a temporary site, and she wanted to know whether I had any ideas about how to help make that transition feel less alienating for the kids. We ended up bringing about 30 architects and a whole range of artists together for what was essentially an urban barn-raising: an attempt to embed things that meant something to these kids from their old school into this new environment. That's what led to the city getting in touch with me to ask about the viewing platform at Ground Zero.

There’s lots of ways to respond to these sorts of events, and for architects – or certainly for us as an office – that’s in seeing where the open space might be and then taking action. It’s been the same in our efforts to now try and help the city’s hospitality industry react to the pandemic.

How did the DineOut NYC initiative take shape?

On 13 March I had a meal at the downtown Nobu. They’d already set the tables out so that they would run at 50 per cent capacity as a maximum. The next day all restaurants were shut. At that point I started speaking with restauranteurs all over the country about the challenges they were facing. One in particular, from Chicago, raised the potential of expanding provision for outdoor dining. I knew that if that we were going to produce a design solution that answered that, it would have to meet a couple of criteria: it would have to be quick to implement, it would have to have social distancing built into the module itself and it would have to go beyond merely being symbolic, but actually enable restaurants to make enough money from their outside operation to keep the business viable. One of the things the pandemic has done is expose just how vulnerable the restaurant industry is. The margins are tiny.

My first act was to reach out to my friend Melba Wilson, who operates Melba’s in Harlem. She had been on the frontline feeding hospital workers after the restaurant closed. I asked her if we could use Melba’s as a case study, so she came onboard as my partner. If this didn’t happen straight away, it was missing the point. So we got in touch with the Department for Transport and the Hospitality Alliance and picked six restaurants – one in each borough. We got those businesses open in the first week, and they’ve been successful. Melba is doing 75 per cent of the business outside that she did when she was fully open. 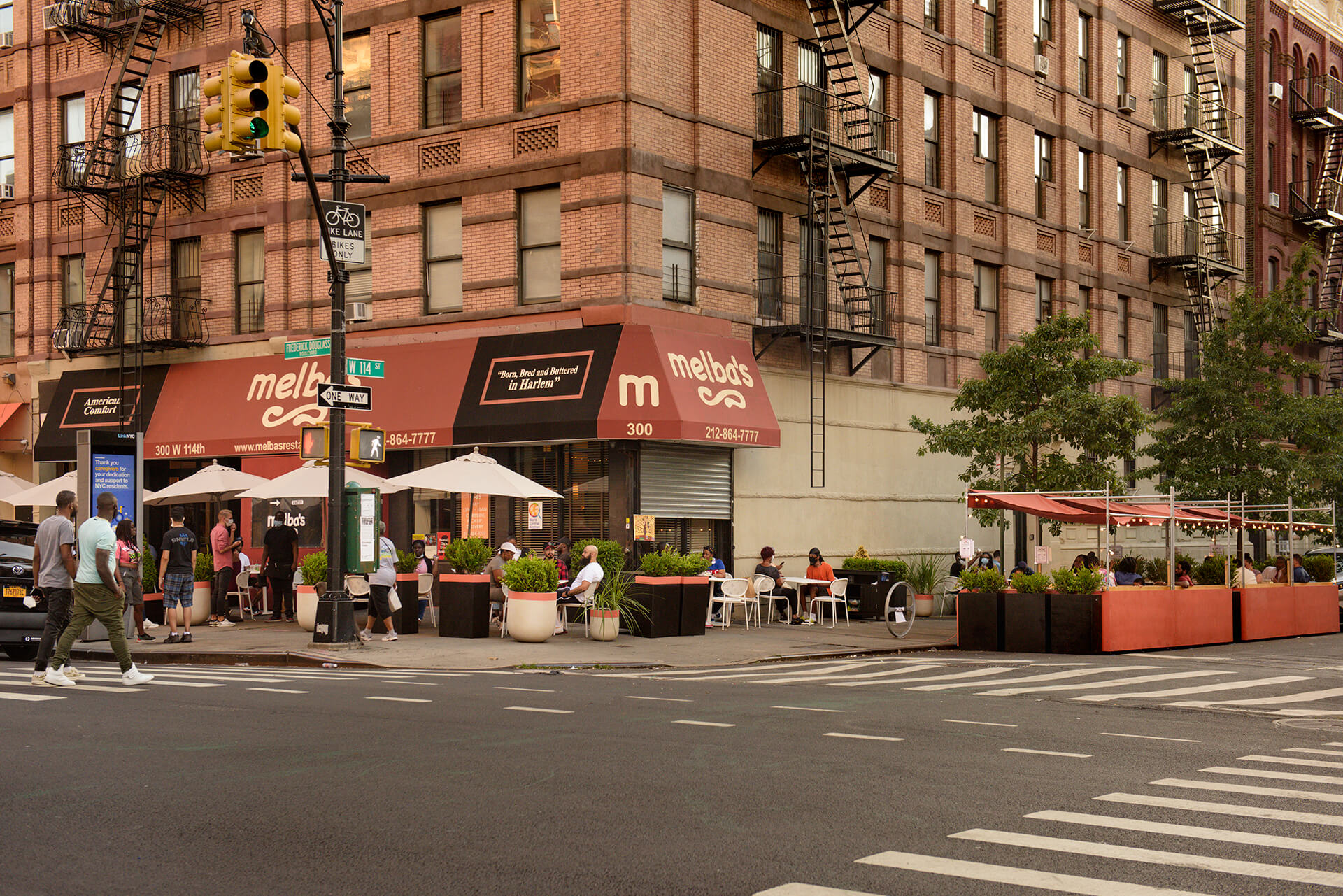 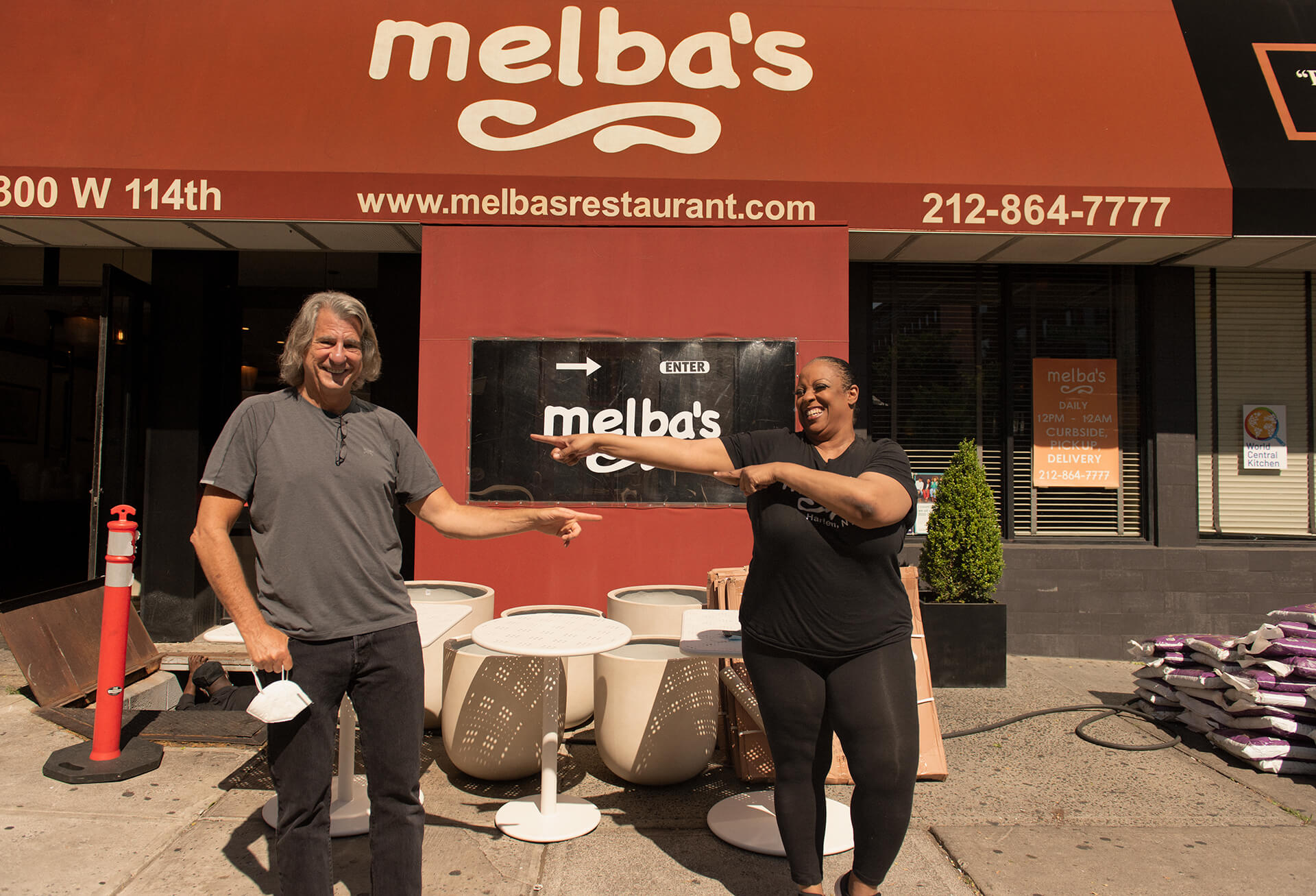 Now we’ve become a 501(c)(3) organization (a non-profit) and are working with the city to try and identify those groups that can best be helped by this initiative. One case in point is Chinatown, which was the first community affected by the pandemic. We took over a full block. It’s the first time in the city’s history, other than for fairs, that they’ve had streets closed for regular business. During the week, there's dining on the two sides of the parking lane. At the weekend, trundle gates close to create a full street just for dining.

The modular kit itself – the design of which is open-source and available online – is extremely simple, consisting of a six-foot-by-10 module with an 18-inch perimeter wall that’s used as a planter. The challenge was making patrons feel part of the restaurant, rather than that they’re simply sitting on the sidewalk. It’s not so much a case of trying to create atmosphere, rather than the conditions that allow atmosphere to develop and connect back to that of the preexisting restaurant. To that end we work with each business on colour patterns and graphics. In Chinatown we collaborated with local artists and seventh and eighth graders from the school to create artwork for the project. In a case like this, where you have a limited number of things – tables, chairs, awnings, flooring – each element takes on a magnified importance.

Do you think the pandemic will have any lasting effects on how restaurants look and feel?

One element that I do see having a long-term impact will be sanitation stations, which will become engrained as part of the welcoming process in restaurants. The sort of rituals that will need to be designed around that will be important, as well as how you handle choke points such as the bar or bathroom. I also think the ability to have more space at the table will remain, even once there’s a vaccine. Restaurants will need to find ways to be more flexible and think less about fixed seating. If I were looking for a new space today, I’d be looking for somewhere that could accommodate partitions that can size the area that a group is eating in to that exact number of people. It’s not quite private dining, because these spaces can open and close, but I believe it will lead to the development of a new spatial language within the industry.

You can read our series on how street spaces will be redefined by the COVID-19 crisis here.