Last May, for the first time in nine years, elections have taken place in Lebanon, boosting citizen engagement and active participation in a country dealing with challenges like a lack of infrastructure, high levels of pollution and a growing number of refugees. Doreen Toutikian, founding director and president of the board at MENA Design Research Center in Beirut, Lebanon, highlights the growing role of designers, architects and other creatives in improving the places people live in.

Design is not only about the newest chair or the latest gallery-bound collectible object. To bring about change and foster participation, designers should collaborate more with activists, institutions and citizens. These are the issues at hand in our conversation with Ghassan Salameh, the newly appointed managing and creative director of Beirut Design Week (BDW).

The theme for this 7th edition of BDW is Design and the City. How did you come up with the theme?
Ghassan Salameh: I think today this is the most relevant topic that we should be discussing, not only in Beirut, but in any city in the world. Cities deal with many problems, like political instabilities, extremism, sectarianism and pollution. These issues influence livability. So it’s time for us designers to stop and ask important questions like, how can we make our cities better places?

Where do we start?
GS: I realised that we had to change the way designers in Beirut think about their role and approach their work. For example, there were very little collaborations, not only amongst designers, but also between designers and professionals of other disciplines.

Another issue is that people think that being a designer is about making a nice table or a new collectible chair that will be sold for a large sum of money and exhibited in a gallery. They don’t see design as a tool to make a change. The way people look at the government should also change: we shouldn’t simply wait for politicians to create better living environments.

In a city where gardens are scarce and greenery is being replaced by concrete, this urban farming platform above parking lots designed by Nathalie Harb is a smart solution to bring more green to local communities. 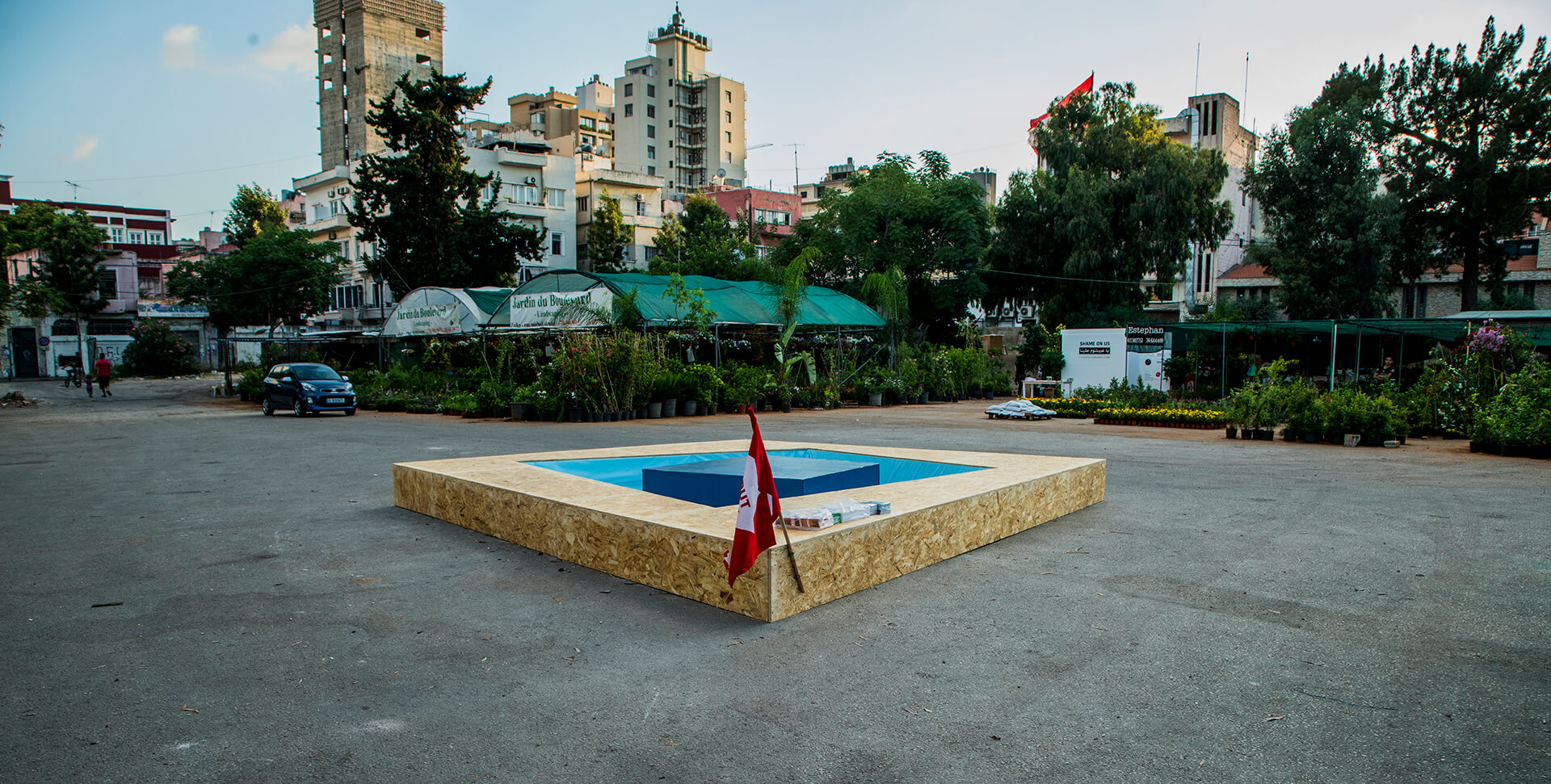 Pop-up Waterscape by LOOP uses water to create an installation where people can meet and recreate.

This way of looking at design is quite new for designers in the MENA region. Was it difficult to find enough people that represent that kind of work?
GS: When people think about the design weeks, they think about a fair that you visit to see new collections, or where you can buy some products. So when we launched the theme, people were confused at first. But it opened the door to a whole other section of professionals who had never been included in the design week before. Researchers, service designers, urban strategists and activists, all collaborated in building up this year’s design week.

Can you give an example of a project with this collaborative approach?
GS: Students from The American University of Beirut Neighborhood worked together with residents and businesses to created interventions in Jeanne d’Arc Street to improve walkability in the city, for example. The most interesting thing about these installations is that people are really interacting with the designs; they are thirsty for these types of work. Hopefully it will make them realise that they can also make a change. 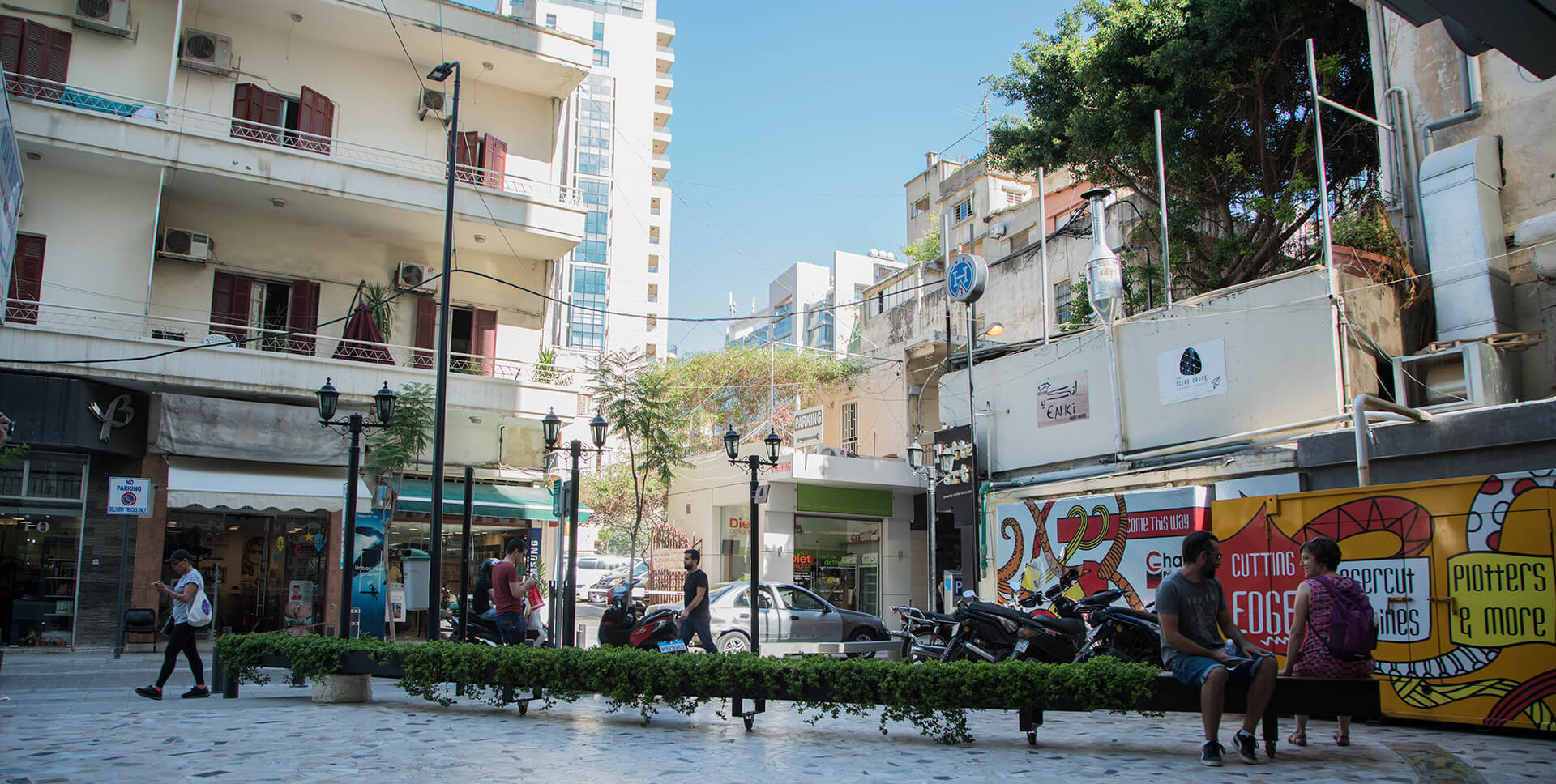 Walking in Beirut can be challenging with a lack of sidewalks and many barriers. Jeanne d’Arc Street shows how to create a pedestrian-friendly street in the city. In an intervention by students from The American University of Beirut Neighborhood, a bench keeps cars away, while words on the ground show residents’ memories about the street’s past. 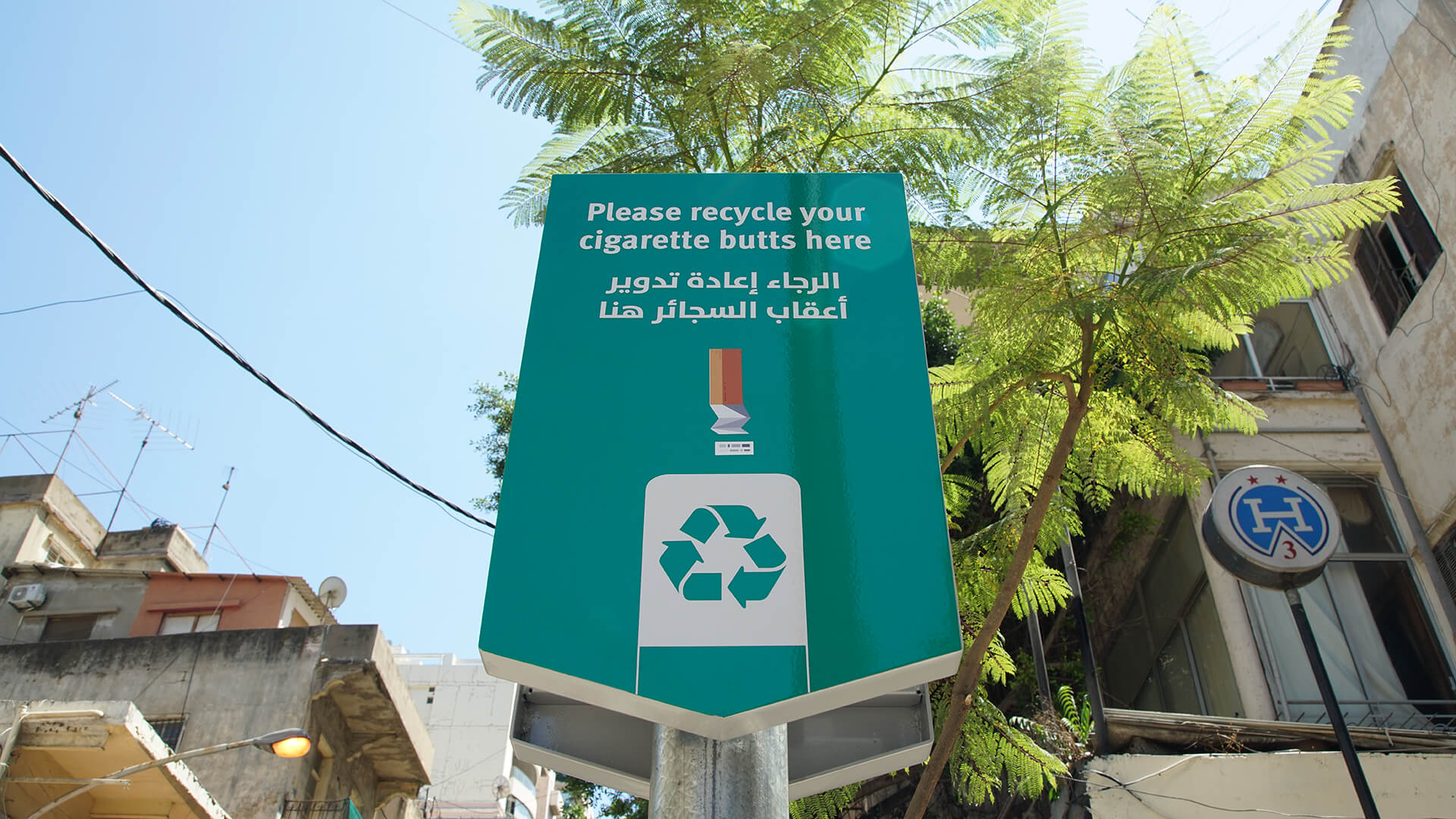 To tackle the pollution problem in Beirut, people have to learn the importance of recycling. This project in Jeanne d’Arc Street introduces recycling of cigarettes, and will re-purpose them into a new material that can be used to make surfboards, for example. 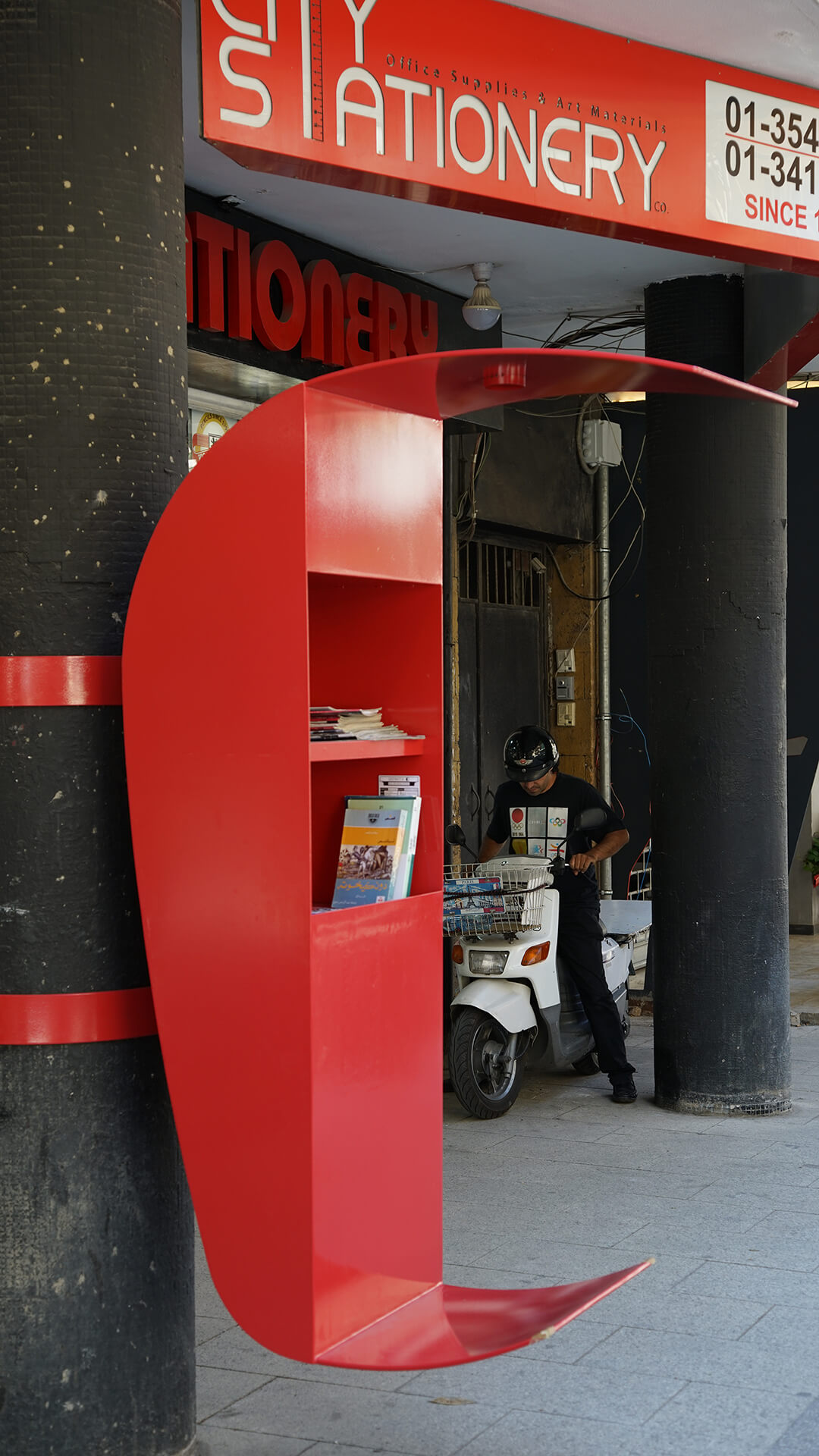 Free public pop-up libraries in the city center invite residents to share books and take a moment to read.

Do you think that with this activist approach you can really change the city?
GS: Not on a big scale. Beirut will not be the most livable city in the world after BDW, of course, but the most important thing is that people see these initiatives and become inspired.

Not only citizens and visitors, but also the government. Proposals like Nathalie Harb’s Urban Hives – a low-cost communal garden structure above car parks – can be implemented straight away. We did 90 percent of the job, and we just asked the government to engage with us.

Beit Beirut (the building where the main exhibition of BDW took place), is a good example of how you can create a difference in a city by actively fighting for it. In Beirut, most of the pre-war buildings are getting destroyed to make space for high-rises. We are losing our heritage and memories related to these spaces. Mona El Hallak, architect and activist, spent about 25 years on the preservation of this war-destructed residential building and collaborated with architect Youssef Haidar to create the first memory museum. 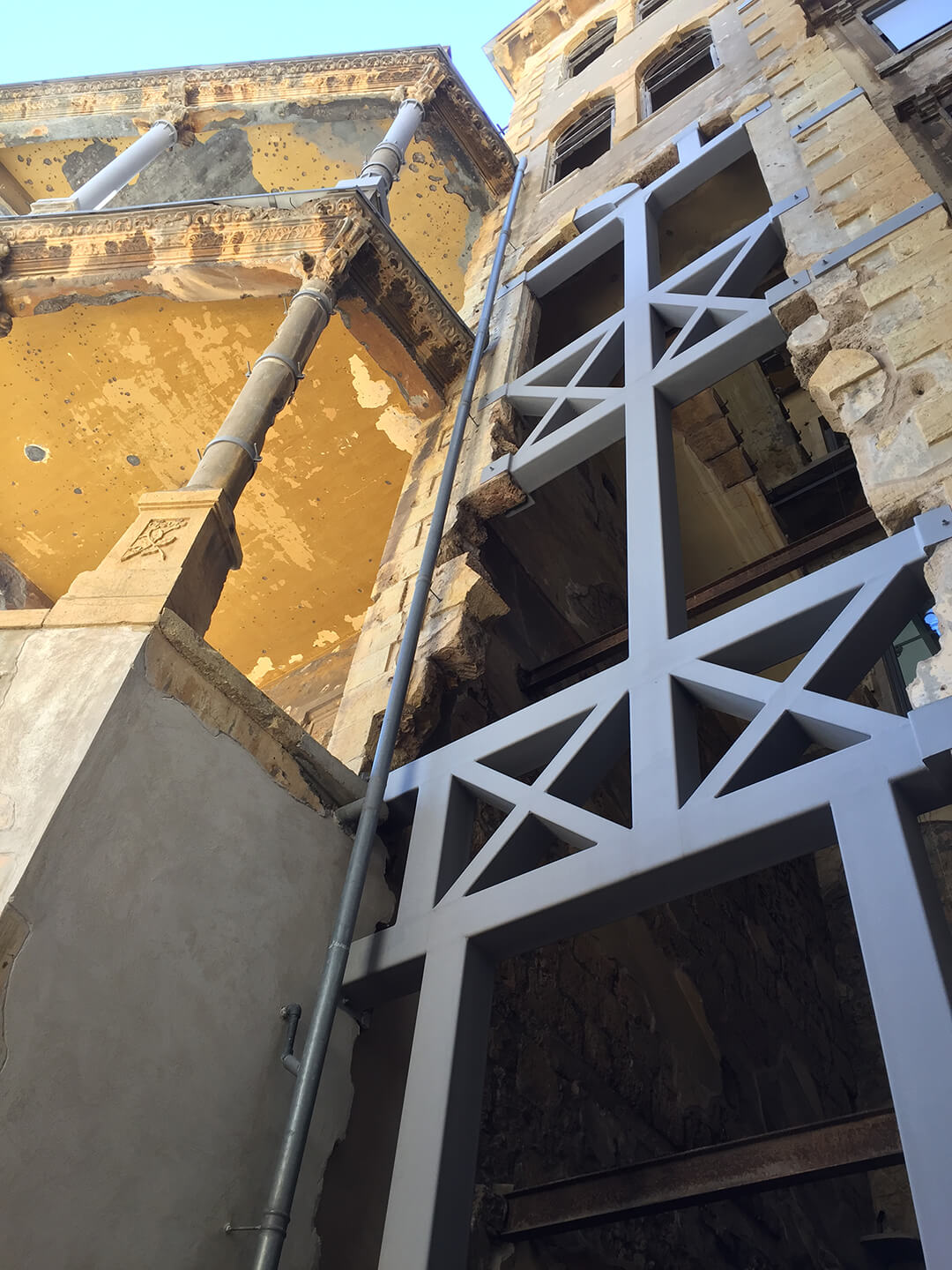 BDW’s main exhibition took place in Beit Beirut, also known as Barakat Buidling. This early-20th century residential building was used a snipers’ nest during the civil war. Preserved by activist and architect Mona El Hallak and reconstructed by architect Youssef Haidar, it combines memories of Beirut’s past with modern architecture.

Don’t you think the government should take care of these problems and come up with solutions?
GS: Actually, we don’t pay a lot of taxes here in Beirut, in comparison with Amsterdam, for example. So we don’t expect that the government should take care of everything. We see it as our task to come up with new ideas and decide how to live. We are the ones experiencing daily life in the city, so we know better how to improve it. We cannot change the city alone. Many people think we should stop dreaming, this is too utopic and idealistic, but I think that any impact that you make on any specific place or individual in the city might actually make a bigger change. It’s the chain effect.