Discovering the luxury and liberty of prison

Early morning. I open my eyes to the curved brick ceiling of a prison cell. Today, I have slept beneath crumbled bricks that have seen thousands of political prisoners, thieves, and murderers – incarcerated here over more than a century.

But instead of a rigid, smelly mattress, I’m lying on thirty centimetres of premium comfort. Instead of a cramped cell, I slip my feet into fluffy slippers and pad across the warm, spacious room to brush my teeth in the attached bathroom, with fixtures designed by Patricia Urquiola and Antonio Citterio. My only cellmate is a tiny velvet plush toy mouse. The black ribbon around its neck proudly reads ‘Hotel Liberty’. 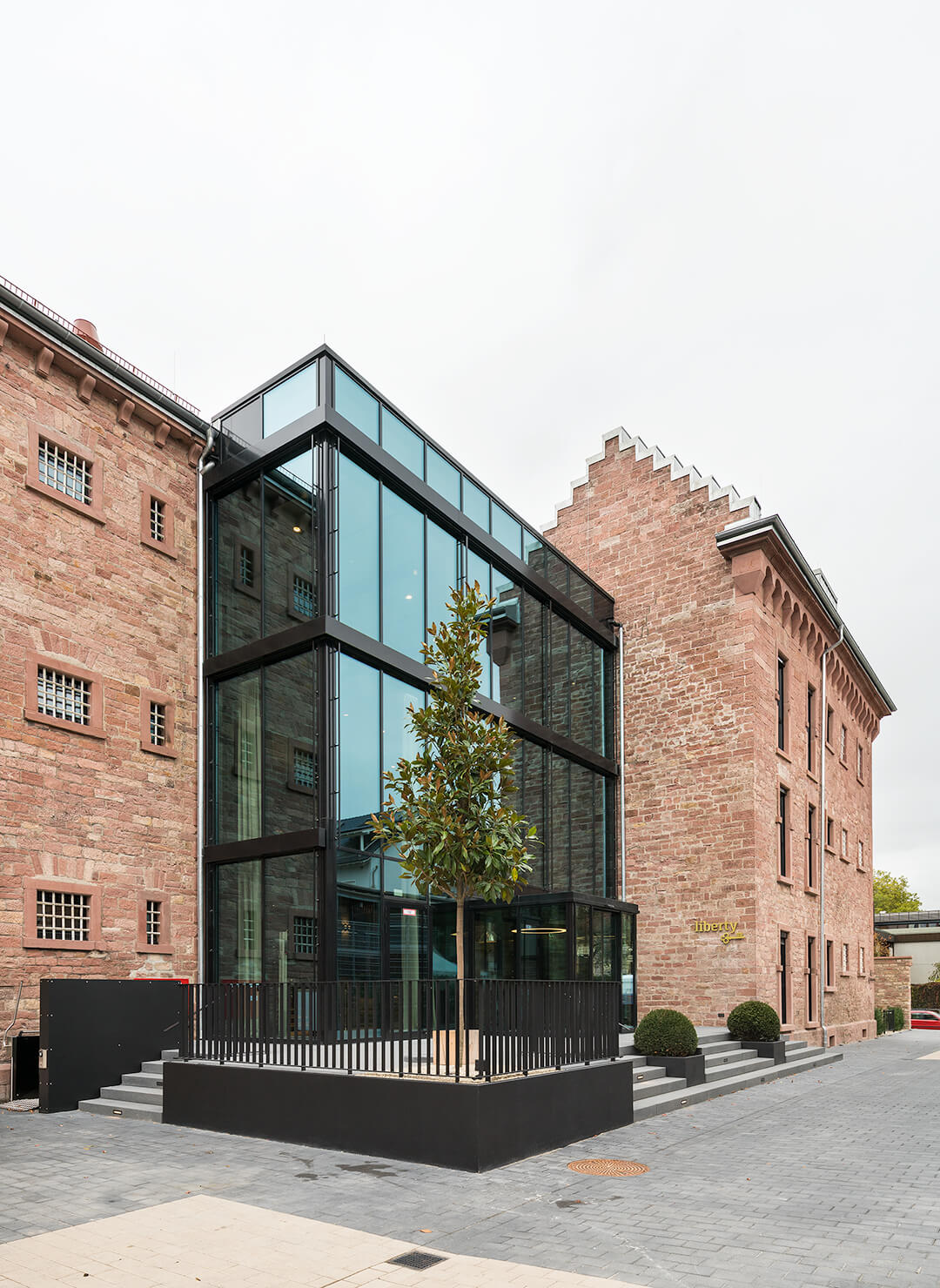 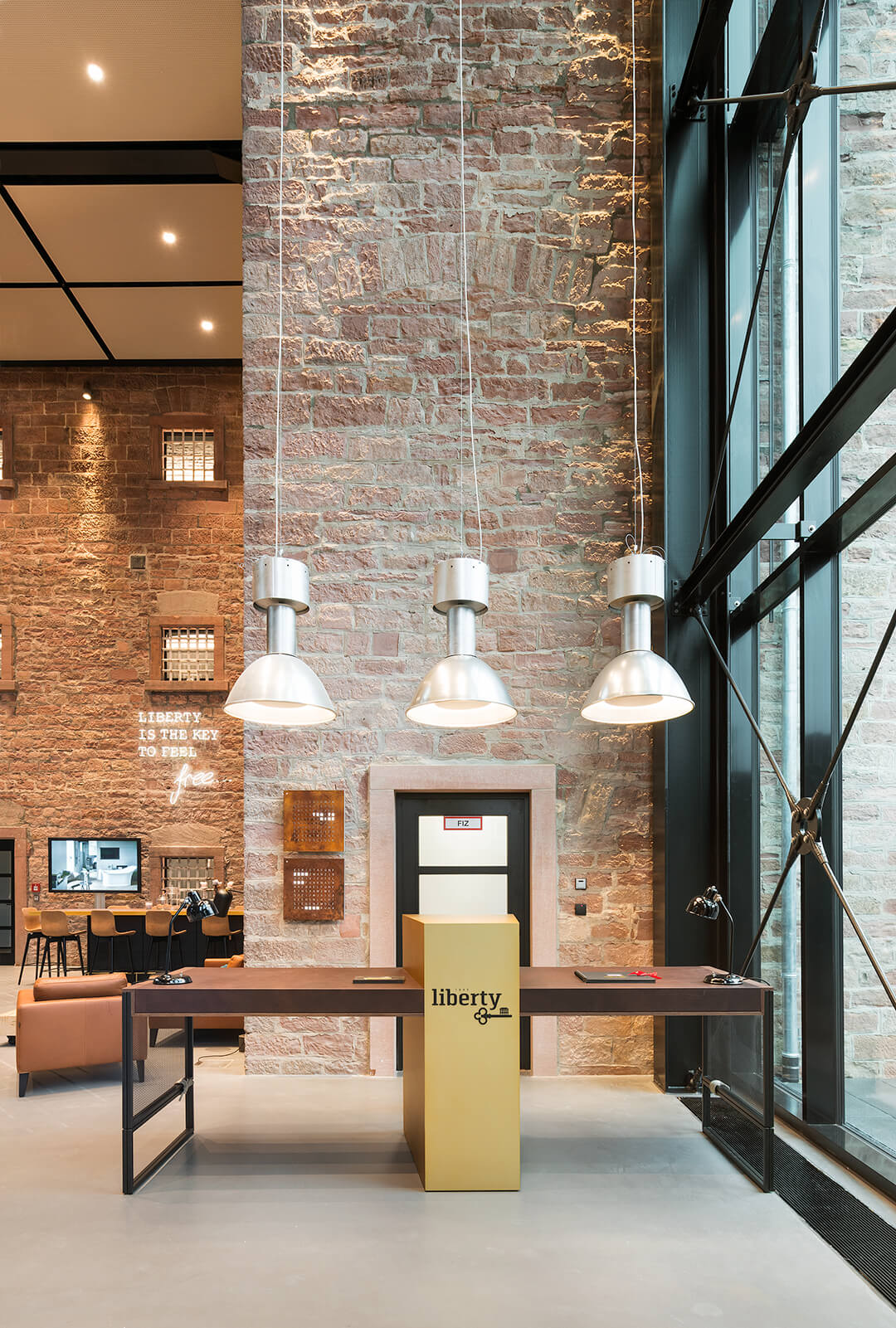 In 1843, the Grabenallee prison was built on the edge of the Baden-Württemberg Black Forest. Revolutionaries of the failed Baden Revolution of 1848/1849 were imprisoned here, but the prison was also used for more run-of-the-mill criminals as recently as 2009, before the prison building reopened its doors on 30 September 2017 as the luxurious Hotel Liberty – reimagined by Knoblauch interior architects under the renowned Design Hotels brand.

‘We wanted people to come here and really relax, to let go of the world,’ says Marc Aeberhard, the passionate and plain-spoken general manager of the hotel. Aeberhard has extensive experience as a hotelier for first-class resorts around the world, and is a faultless host to our little group of journalists here to experience the new hotel. ‘When this place used to be a prison, all people had was time. So now we give our guests the luxury of time,’ he explains. 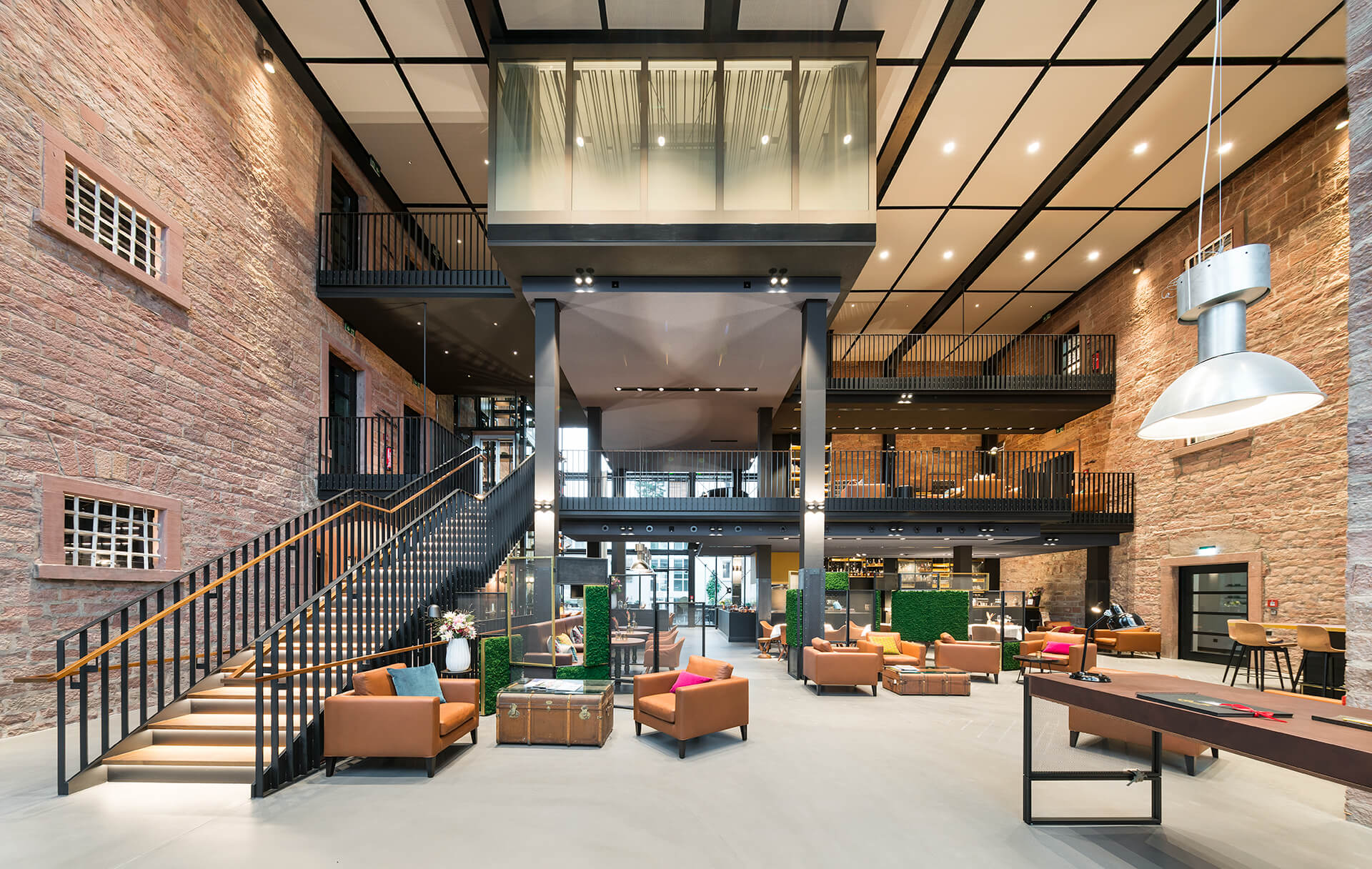 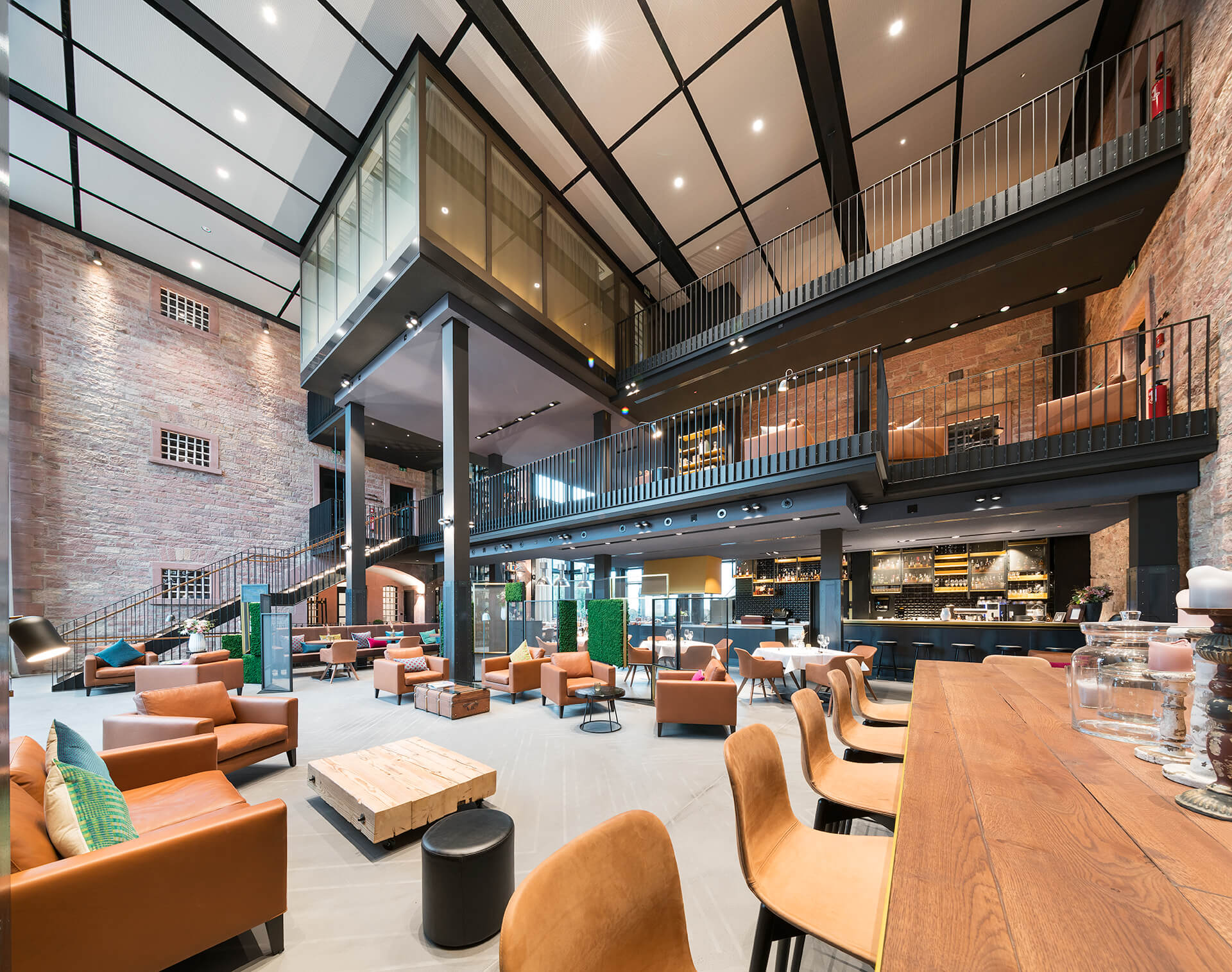 The Grabenallee has been transformed to a level of luxury and elegance beyond the imagination or belief of its former inmates. Led by Katja Scharnagel of Knoblauch, the original brick buildings now accommodate 38 rooms and suites, with a new modernist glass structure to connect the two wings and update the façade.

The glass box houses the lobby, the haute-cuisine restaurant and bar, and a vertiginous lounge area upstairs. The mezzanine level serves as a central public space that recalls the former prison yard. Original prison elements have been preserved here and throughout the hotel, with the prison bars repurposed as decorative features in the interior walls and over mirrors in the stairways. 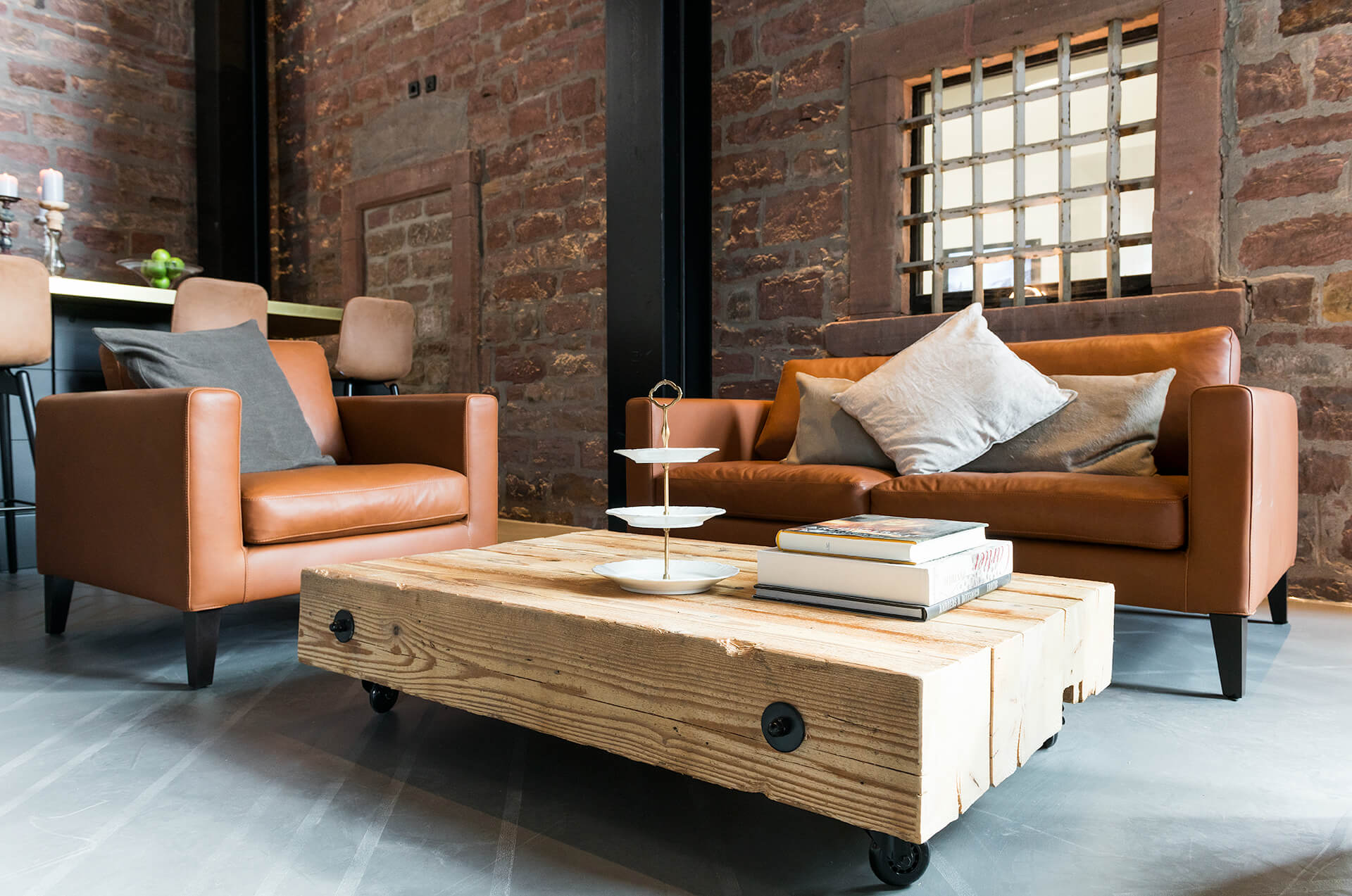 Constructed from old beams, the very tables are made of history.

The architects wanted to keep the old cell doors to the suites, but the door frames were too low for modern building standards. Thus the original iron doors stand alongside the new functional doors, serving as windows to the past: the hatches through which the prisoners’ meals would be passed now contain photographs of the prison as it once was. 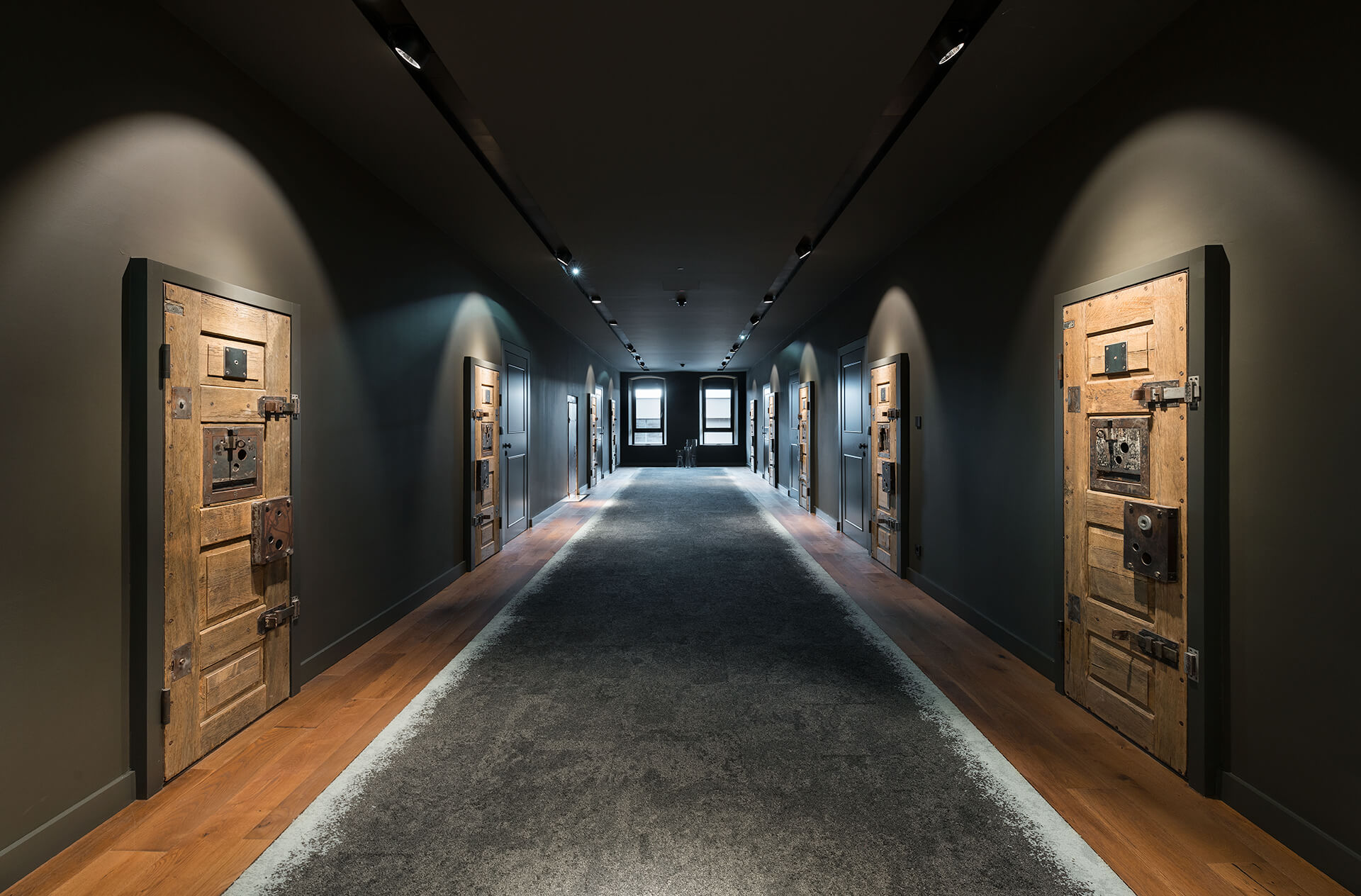 Two prison cells have been combined to create the classic rooms, while the executive rooms are three cells large. The curved ceilings still show the size of the cell contained, but the rest of the room is designed for modern comfort and luxury, furnished with the eclectic style and uncompromising quality of brands including Fritz Hansen, Hay, &tradition, Arﬂex, and Carl Hansen. 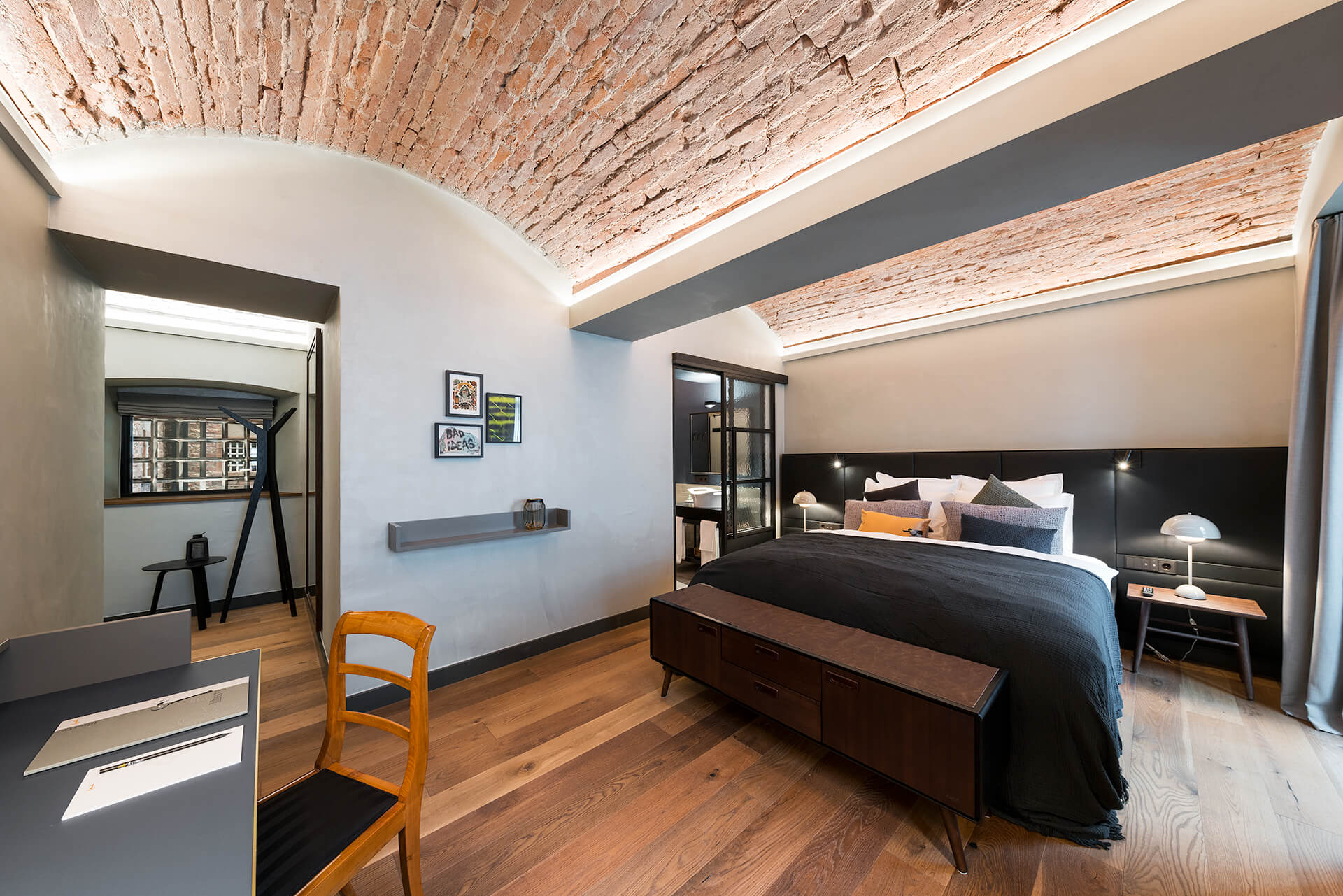 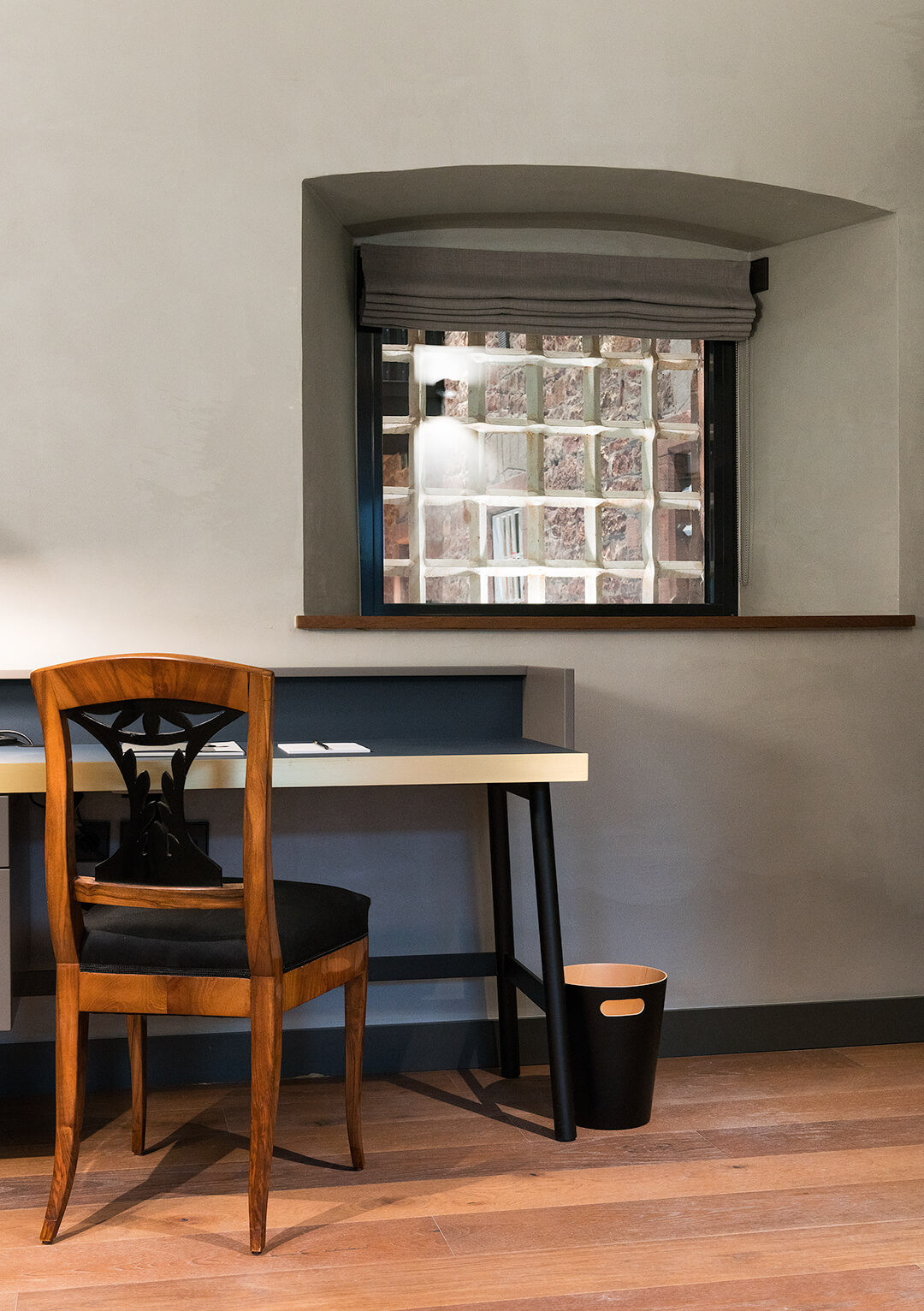 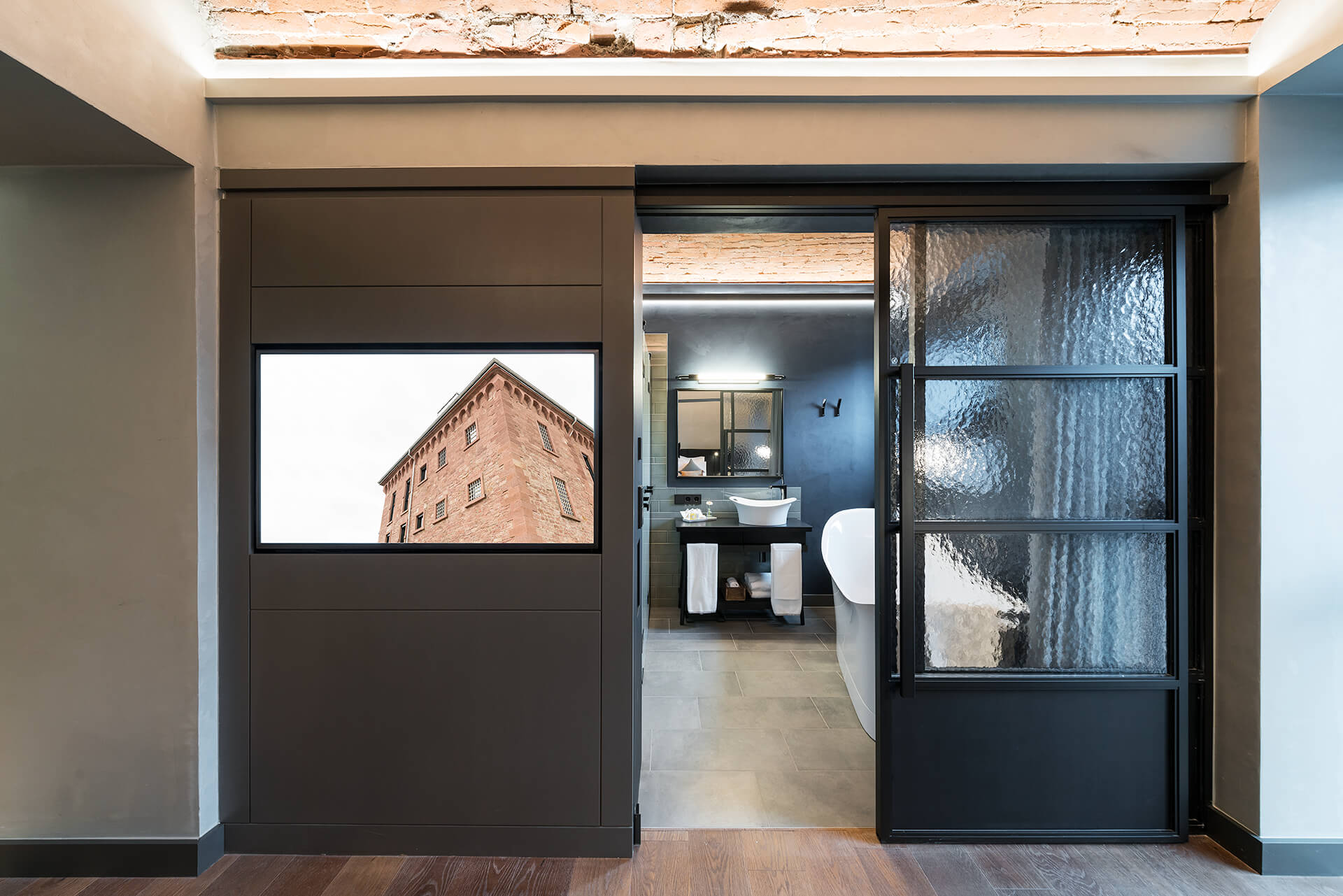 The faucets and shower sets designed by Antonio Citterio are finished in Axor FinishPlus black chrome, which combines the smoothness of silk with the glasslike touch of a river pebble, polished over millennia by the gently flowing water. Axor applies next-level physical vapour deposition technology to create these finishes, a process that which evaporates the finishing material in a vacuum chamber to coat the surfaces of the bathroom fittings in an ultrathin layer that feels sleek down to the molecular level. 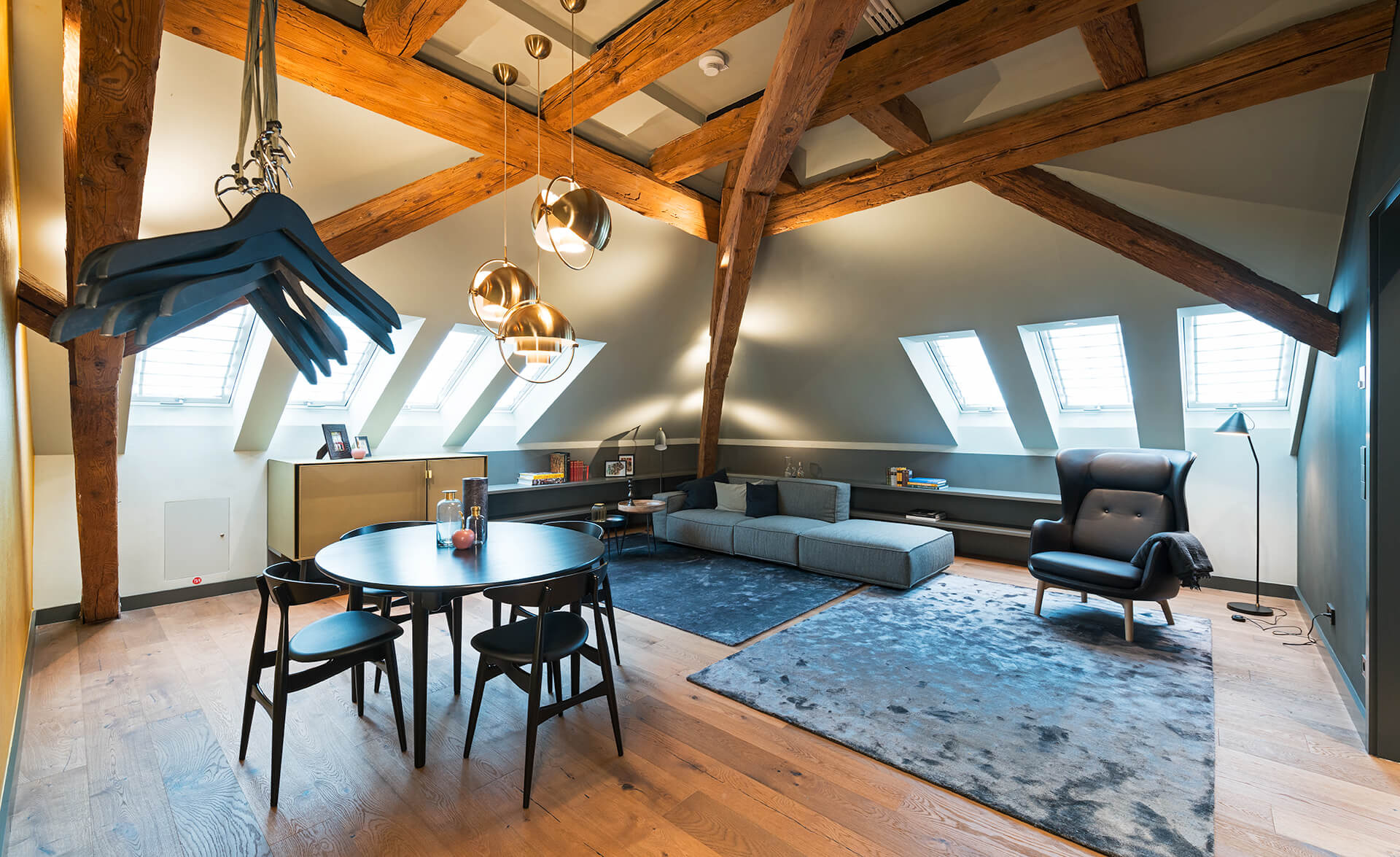 The largest suite is 80-sq-m with an optional attached room. 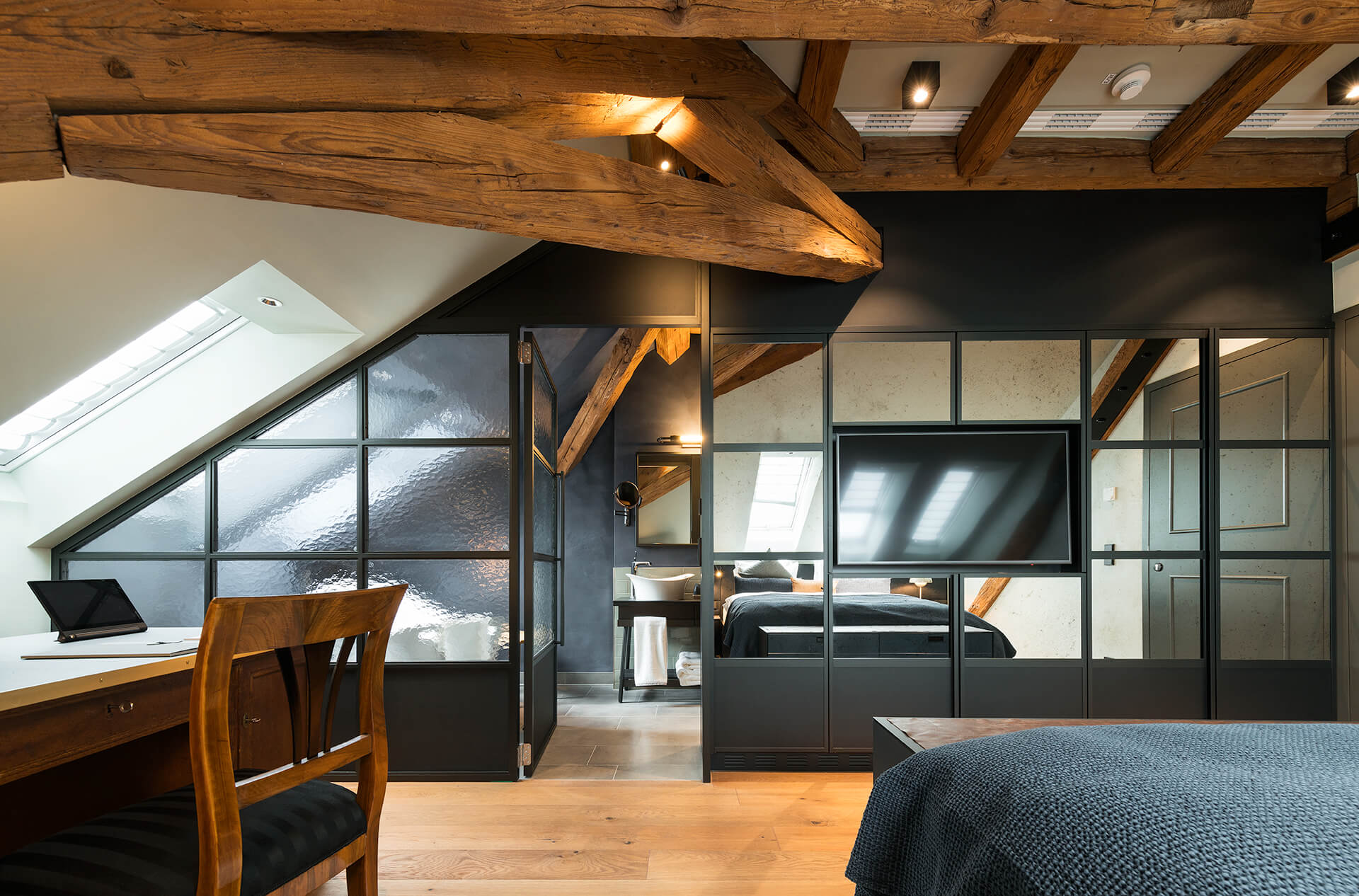 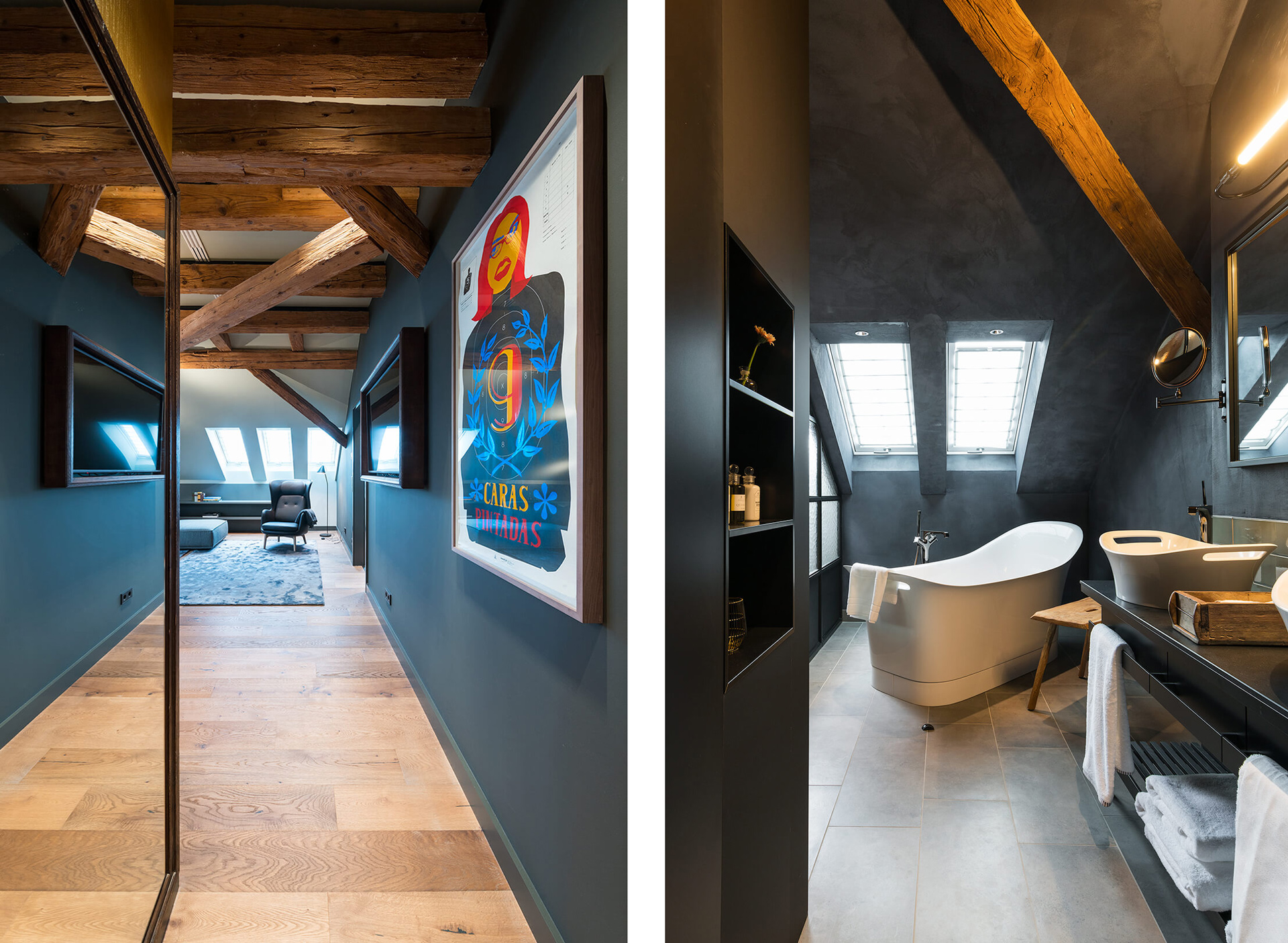 Many rooms feature the work of local artist Stefan Strumbel, who was inspired to interpret the themes of captivity and freedom.

However, the main attraction of Hotel Liberty is its attached restaurant, Brot & Wasser. Led by Michelin-starred chef Jeremy Biasiol, the haute cuisine on the menu is technically complex and wildly imaginative, with local and regional inspiration elevated by international flavours. Think a fantastical Black Forest appetizer of mushrooms crumbed to ‘soil’, served in a bowl with a wild salad arranged as though growing out of it; a side of cod and razor clams topped with black squid-ink lace; chocolate globes that melt at the table to reveal a sweet treasure and berries; and wine of an impeccable vintage such as is present only at life’s most momentous occasions.

‘Deprivation calls for a focus on the essentials and thus forms the basis for luxury,’ says Scharnagel, a non-intuitive defensive response to the overwhelming demands of modern life. The architects invert the heritage of the prison to make the hotel a retreat from the outside world. As Aeberhard says, all the prisoners had was time – a wealth of time, but time has indeed become a precious commodity which Hotel Liberty restores to guests in a unique experience of history. 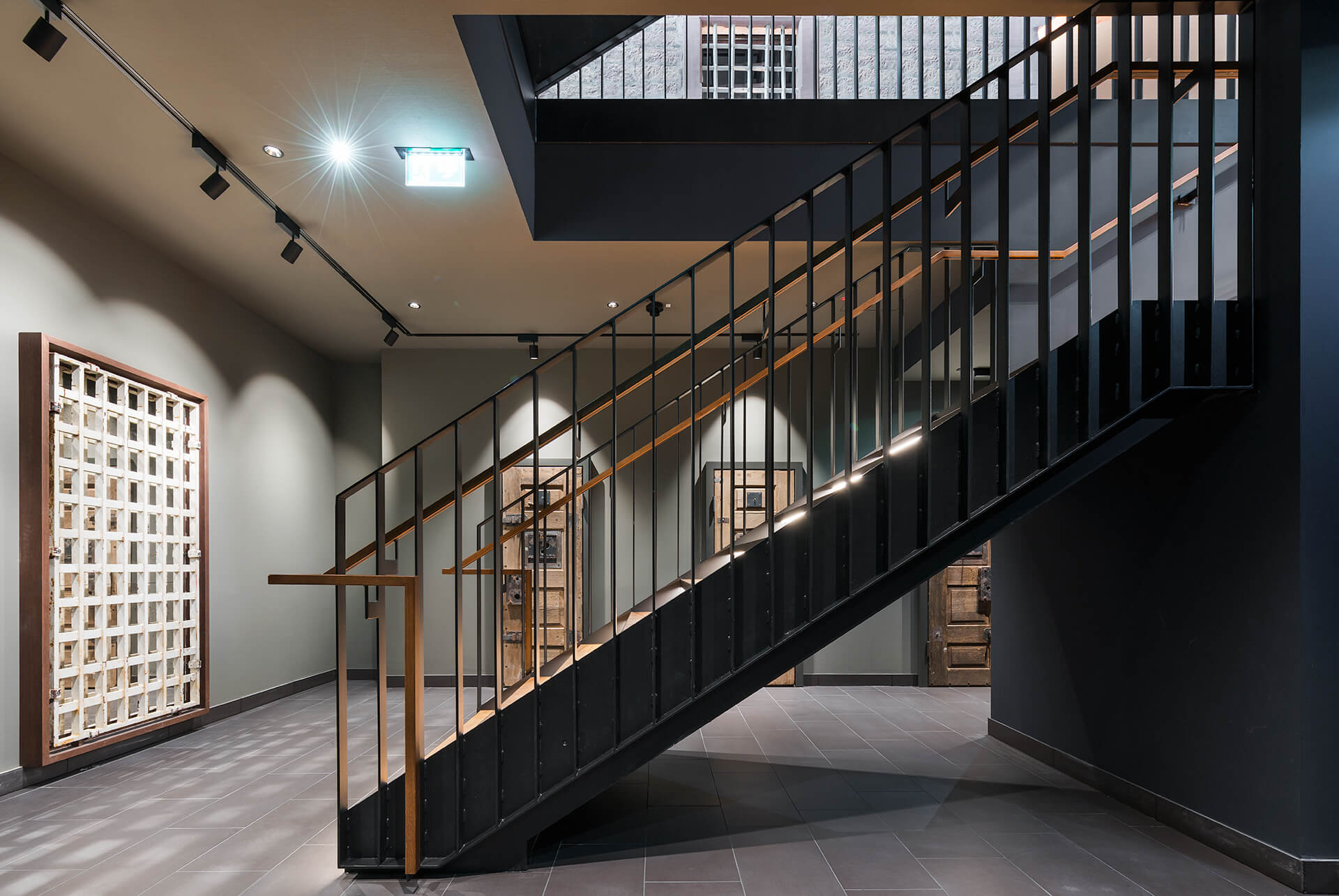 ‘The origin of the prison goes hand in hand with industrialization in Germany, which is why we used many robust materials and dark grey surfaces,’ say the architects.

Part of the new wave of hotels countering standardized hotel chains with boutique concepts, Hotel Liberty heralds what’s next for the industry. ‘Tomorrow’s hotels will need to be unique in response to the site – integrating elements from the city or region – or unique with regard to services,’ says Scharnagel. ‘To be unique will be the future.’