Unlike other winter-sport destinations, the autonomous South Tyrol region in northern Italy has a lean and sharply innovative hospitality industry — hotels are family-owned operations where Germanic craftsmanship and technical know-how come together with Italian artistry and bonhomie. As a generational handover has ignited a wave of renovations in the past 10 years, no other project has so expertly combined the old, the new and the permanent as the Bühelwirt, a place so conscientiously suspended in time that it might bear the answer to our over-Instagrammed travel customs.

Michaela Haller, the co-owner of the Bühelwirt, already knows the drill of the unspoken guest arrival routine. There is a small transportation price to pay for being a best-kept secret, so many reach the hotel tired from the journey — San Giacomo, a hamlet in the Valle Aurina section of South Tyrol, is a mountainous two-hour drive away from the Innsbruck airport and three-and-a-half hours from the Venice airport. Some of those guests go through the check-in process almost as in a mute haze. And yet, as they walk from the reception to the lift, their eyes suddenly open when they cross the literal line on the floor that separates the old building from the new extension: the floor-to-ceiling larch and the panoramic views of the Dolomites have a strong effect on their spirits. By the time they reach their rooms, featuring similarly striking panoramic windows and bespoke wooden furniture in calming lines, they become animated and talkative, their eyes bright with childlike glee.

That’s because the Bühelwirt is the subject of one of the most intelligent hotel renovations within the already impressive South Tyrol tourism industry. The execution, handled by local firm Pedevilla Architects, challenges the concept of timelessness by mirroring two differing versions of it: one from 1910 and another from 2017, but the latter designed to blur any time stamps. 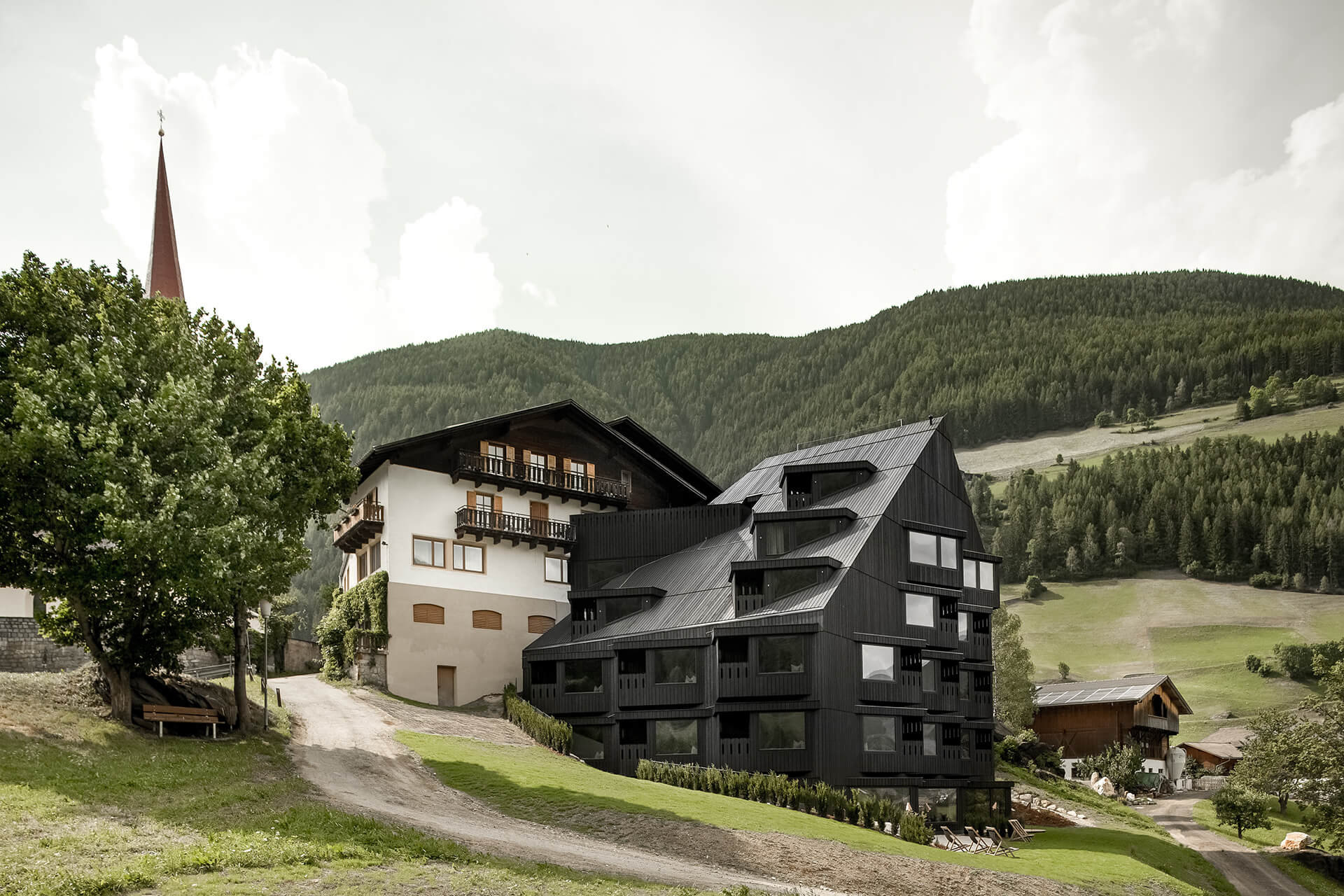 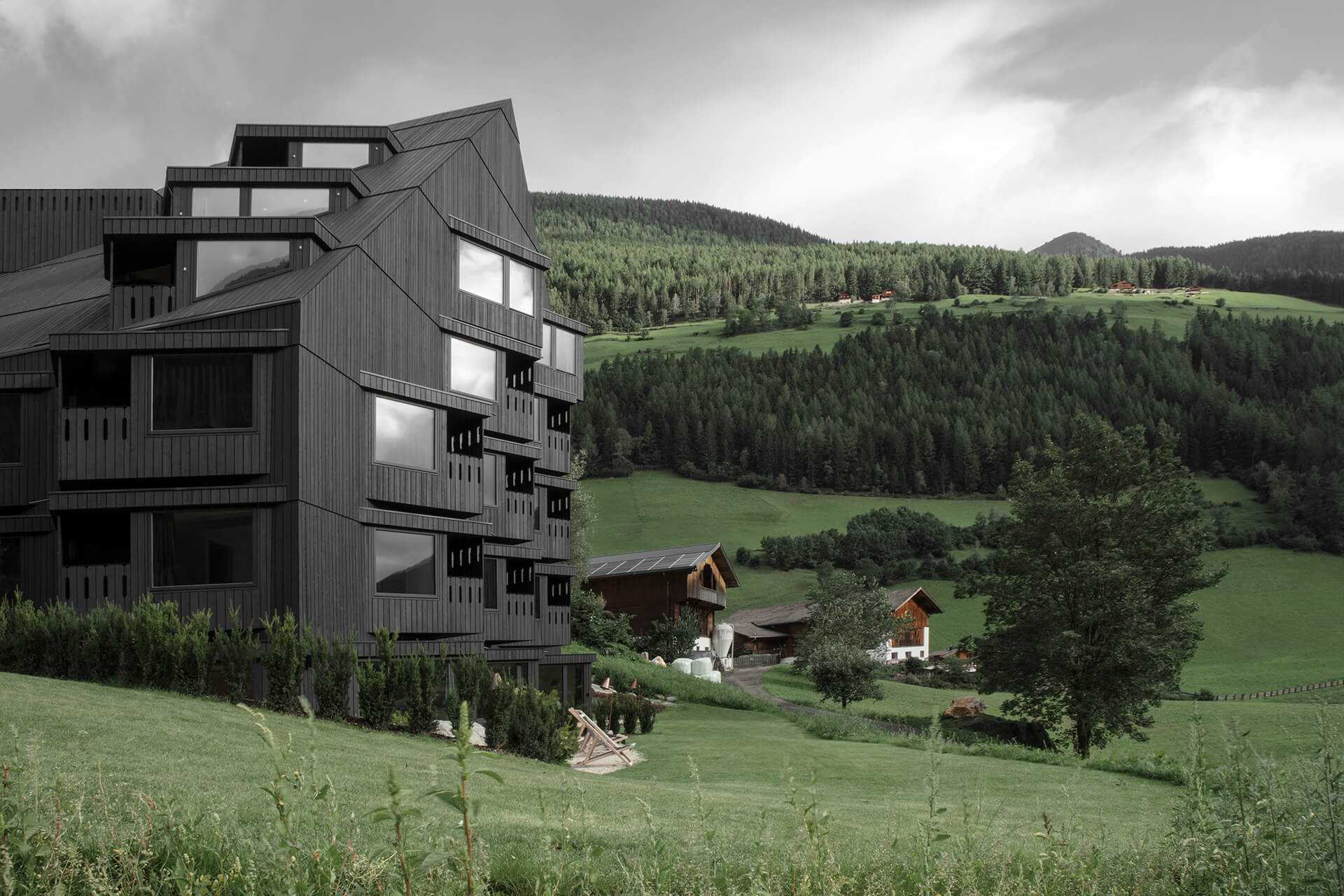 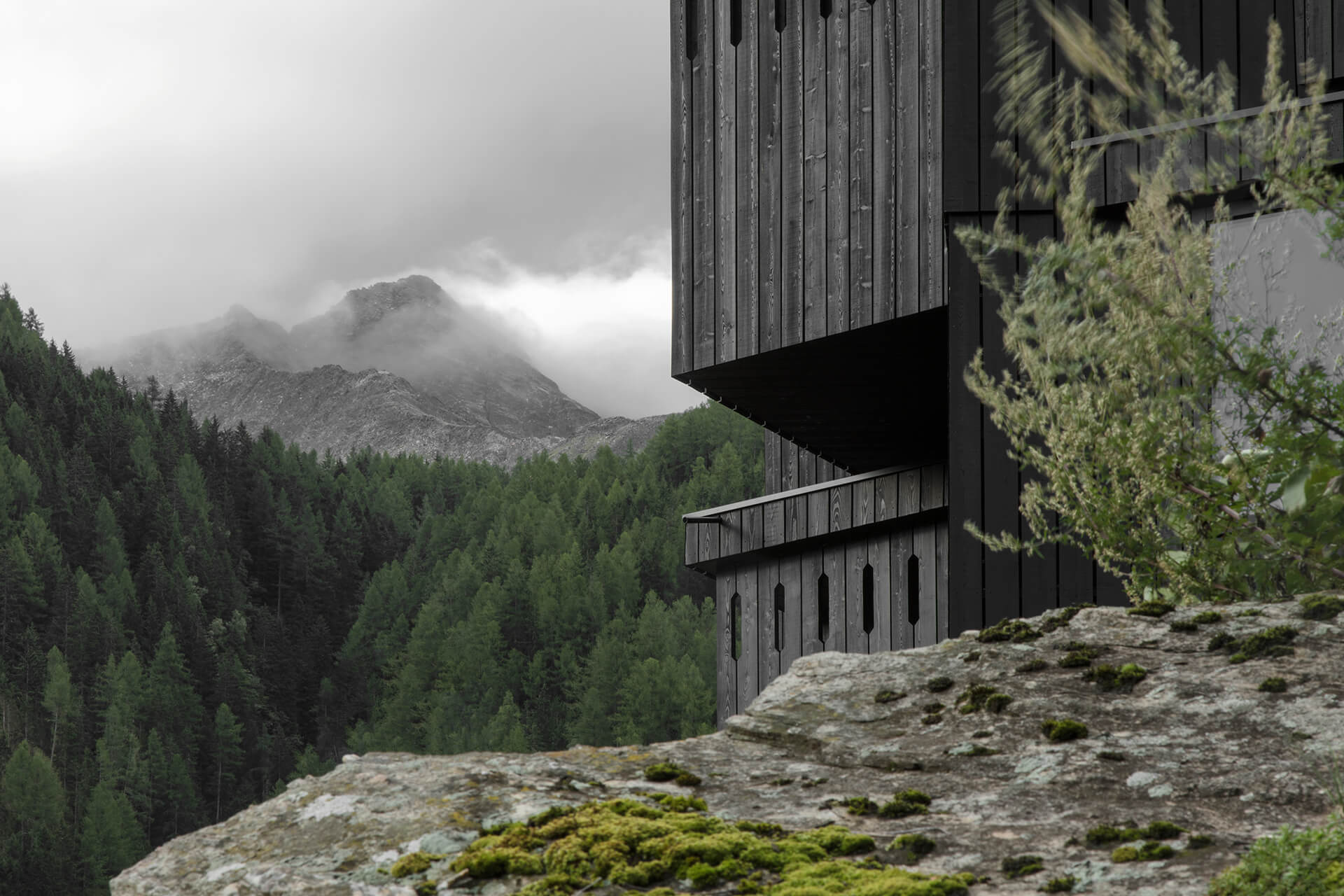 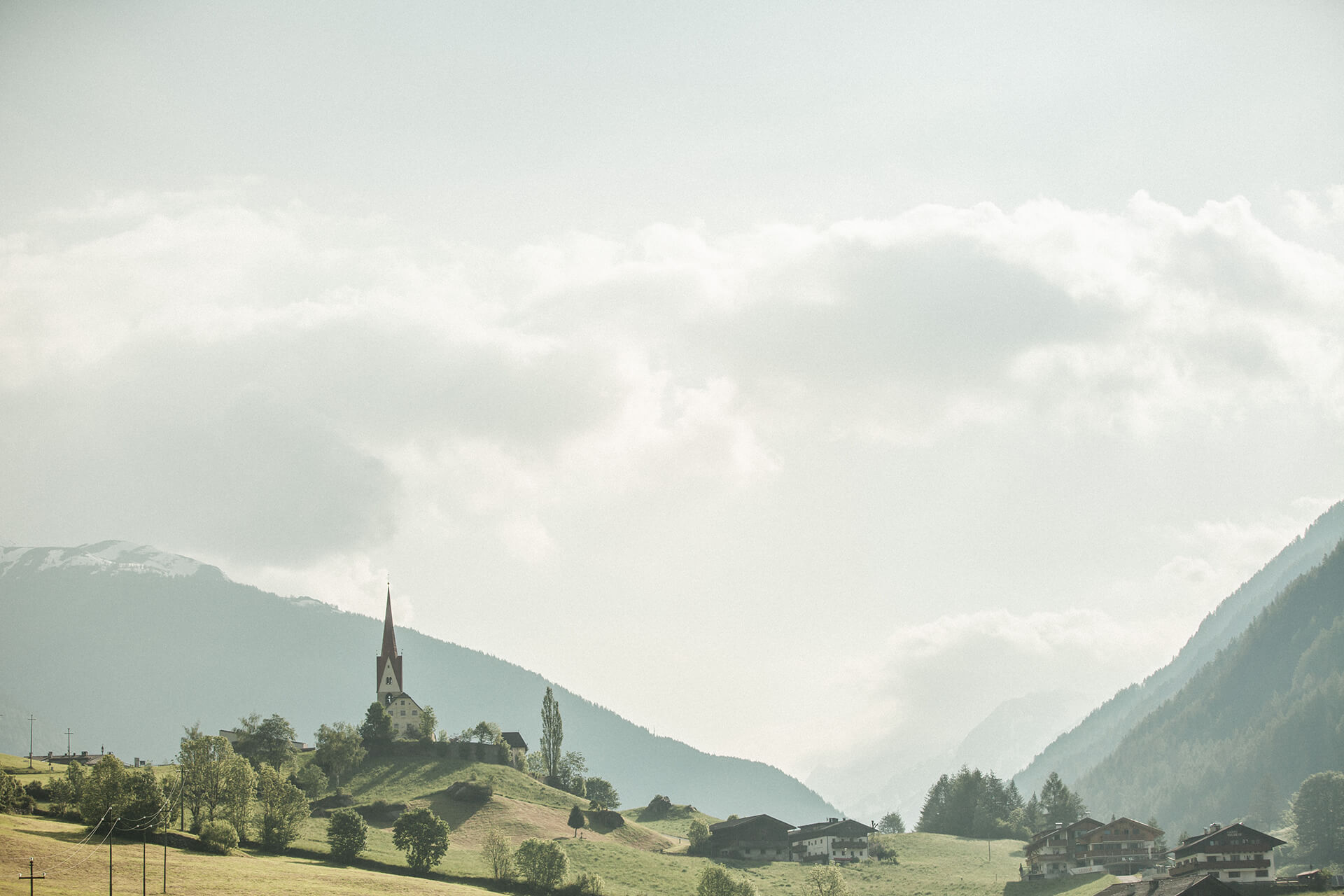 Instead of sprucing up the old building, a standard practice in the boutique-hotel industry, Haller and her husband Matthias decided to preserve it in its entirety, and instead purchase the mountain-view parcel right below, in order to create a contemporary extension. This addition, though, is not in a separate building: it is seamlessly integrated, as the frontal one ends and the posterior extension begins in a nearly imperceptible division in the middle of the dining tables.

That’s one way to do timelessness: finding a way to not leave one’s original client base behind, while still diversifying

There’s a solid business decision behind it. The first incarnation of the Bühelwirt was as a roadside locanda — the name translates to ‘the eatery on the Bühel hill.’ From then, it progressed into a guesthouse with 24 modest rooms, attracting mostly Italian tourists on winter holidays. But the Italian per-capita income, particularly after last decade’s economic crisis, does not compare to the broader capacity of the German-speaking traveller. Therefore, instead of shifting the entire operation to the tastes and wallets of the high-end Teutonic consumer, the Hallers also kept the more budget-friendly option up front. That’s one way to do timelessness: finding a way to not leave one’s original client base behind, while still diversifying.

That choice has a highly personal background. South Tyrol might be an autonomous region in Italy, separated from the rest of the boot by language and lineage, but there’s something traditionally Italian about it: the majority of its businesses is family-operated, and hotels are no exception. Instead of large resorts undersigned by hospitality conglomerates, offerings in the region are entirely owned by third and fourth-generation hoteliers. Michaela Haller is one of the latter. 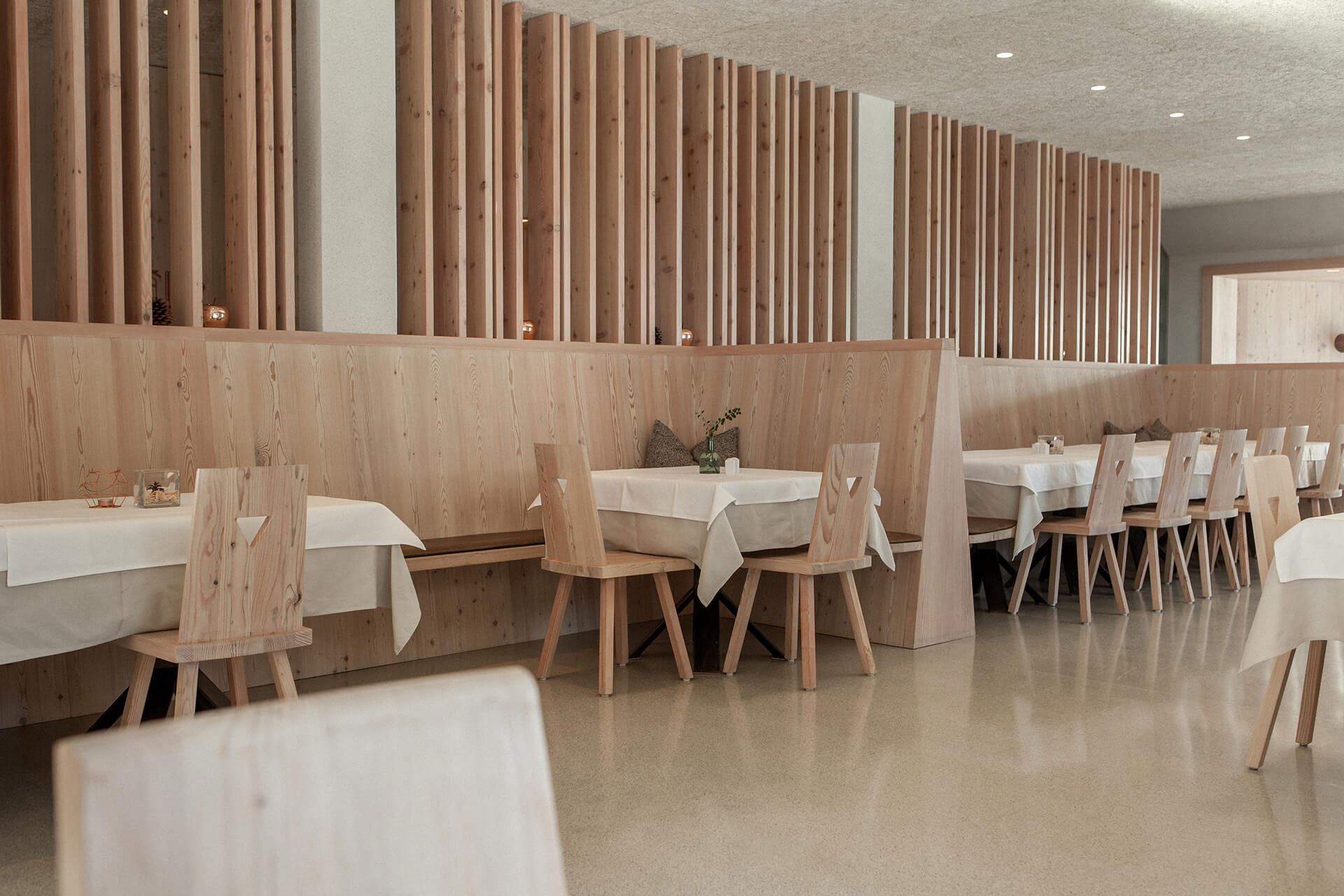 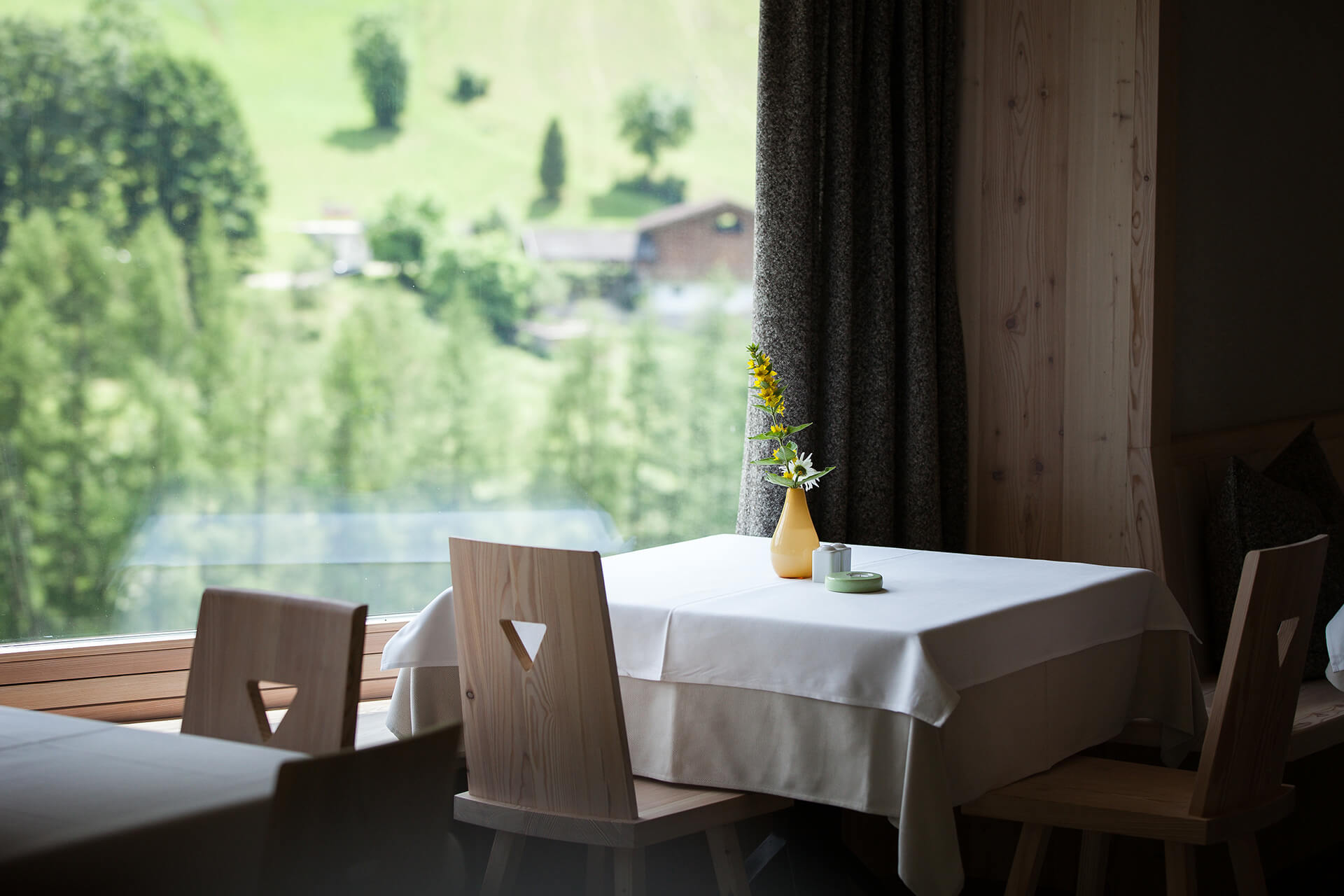 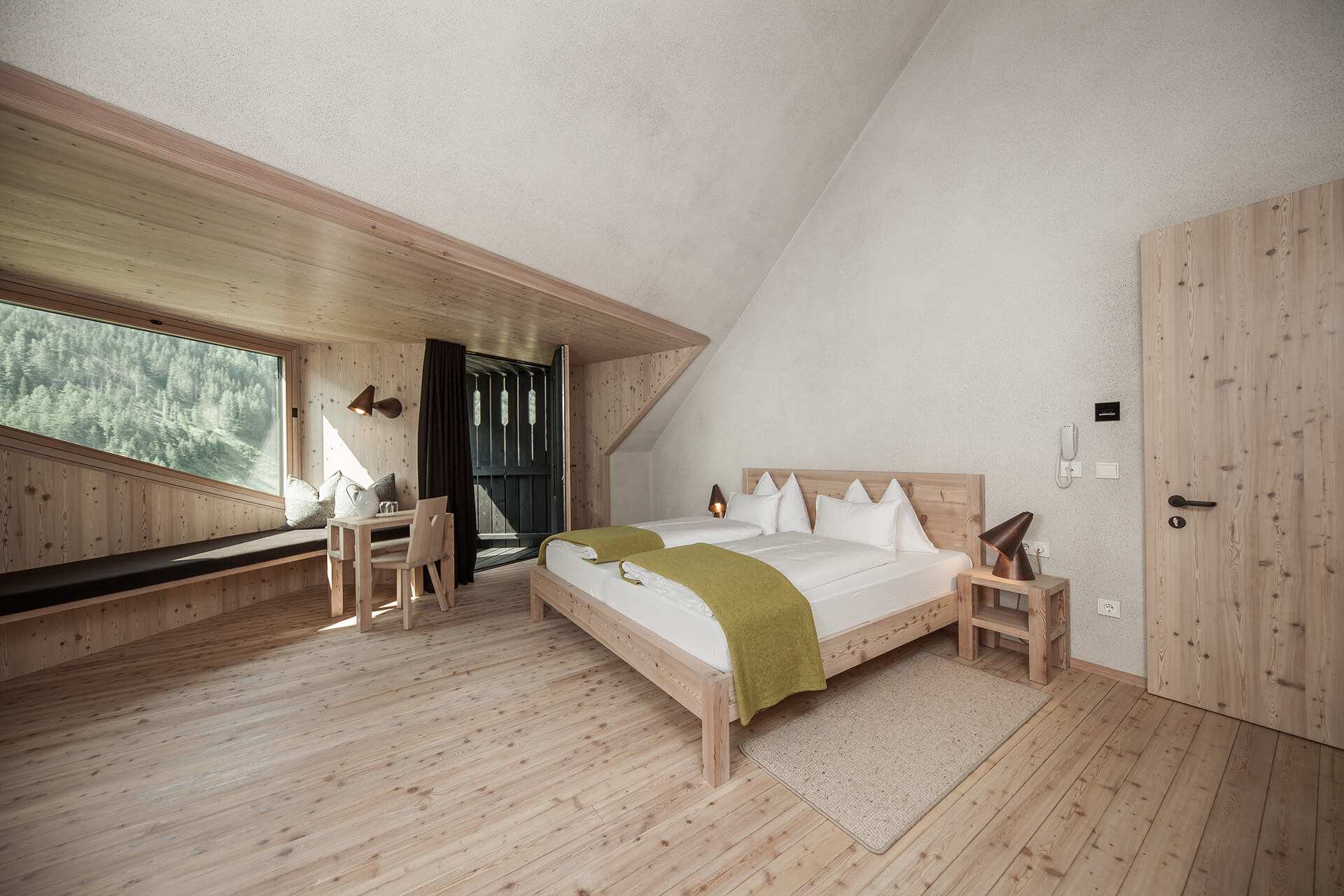 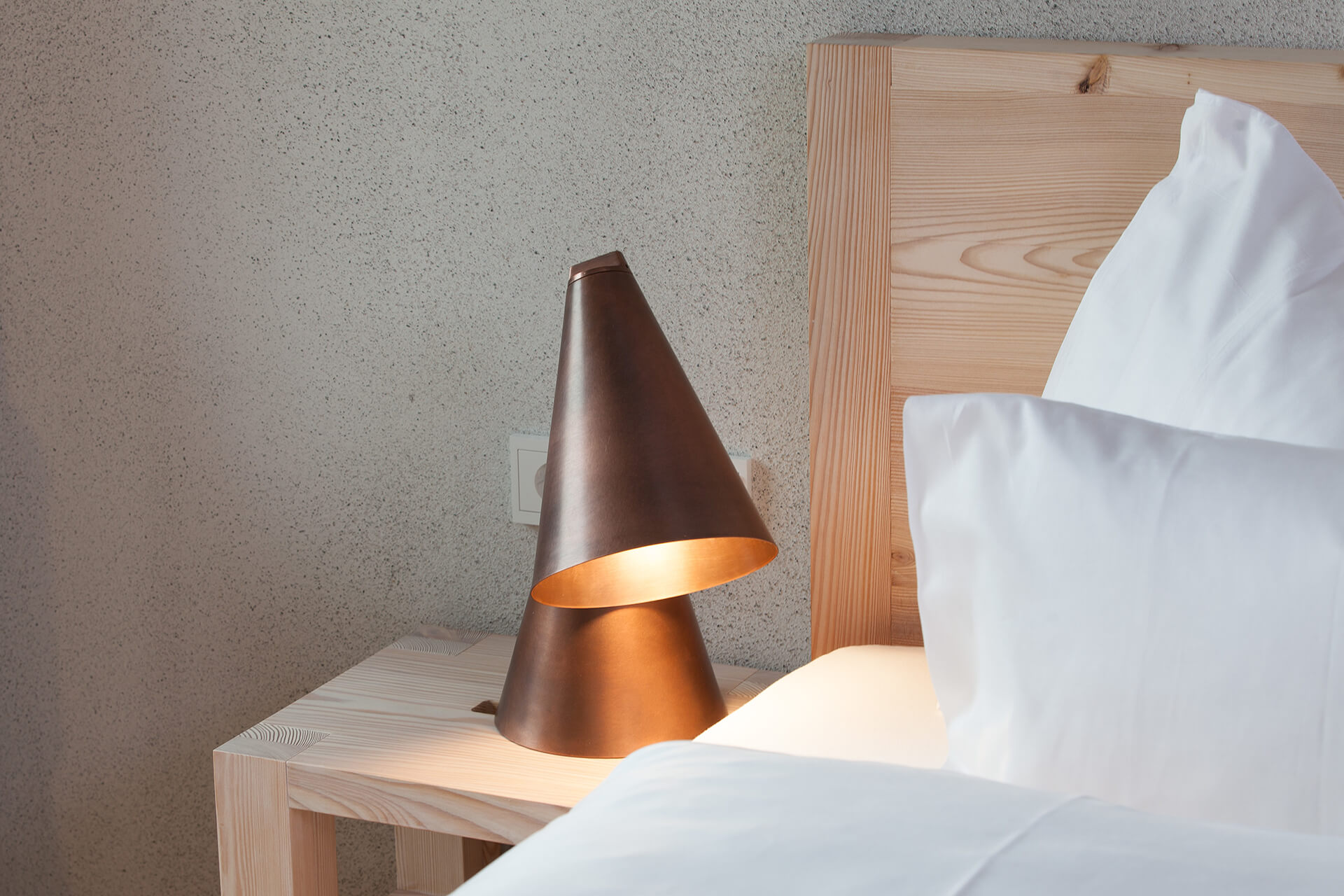 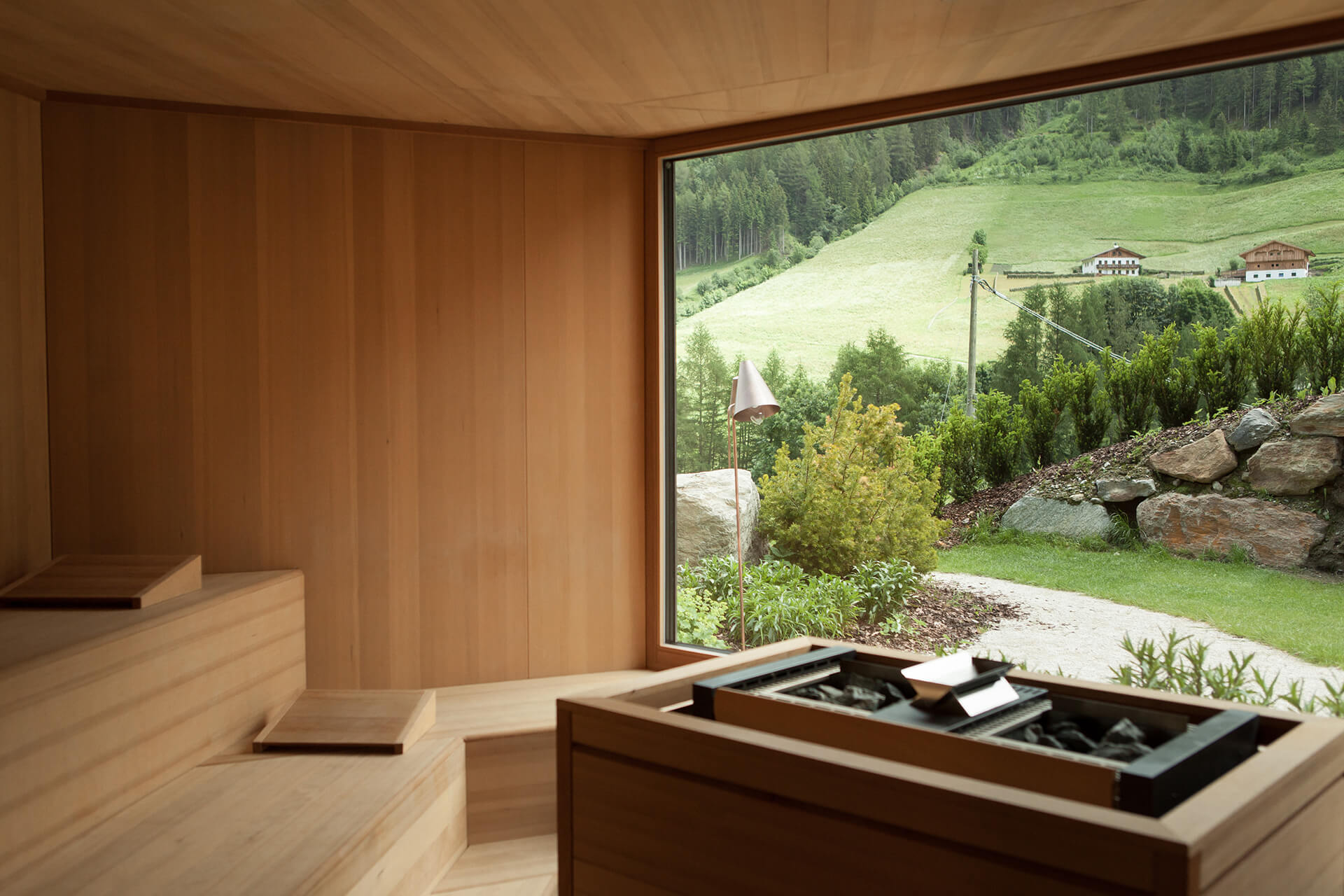 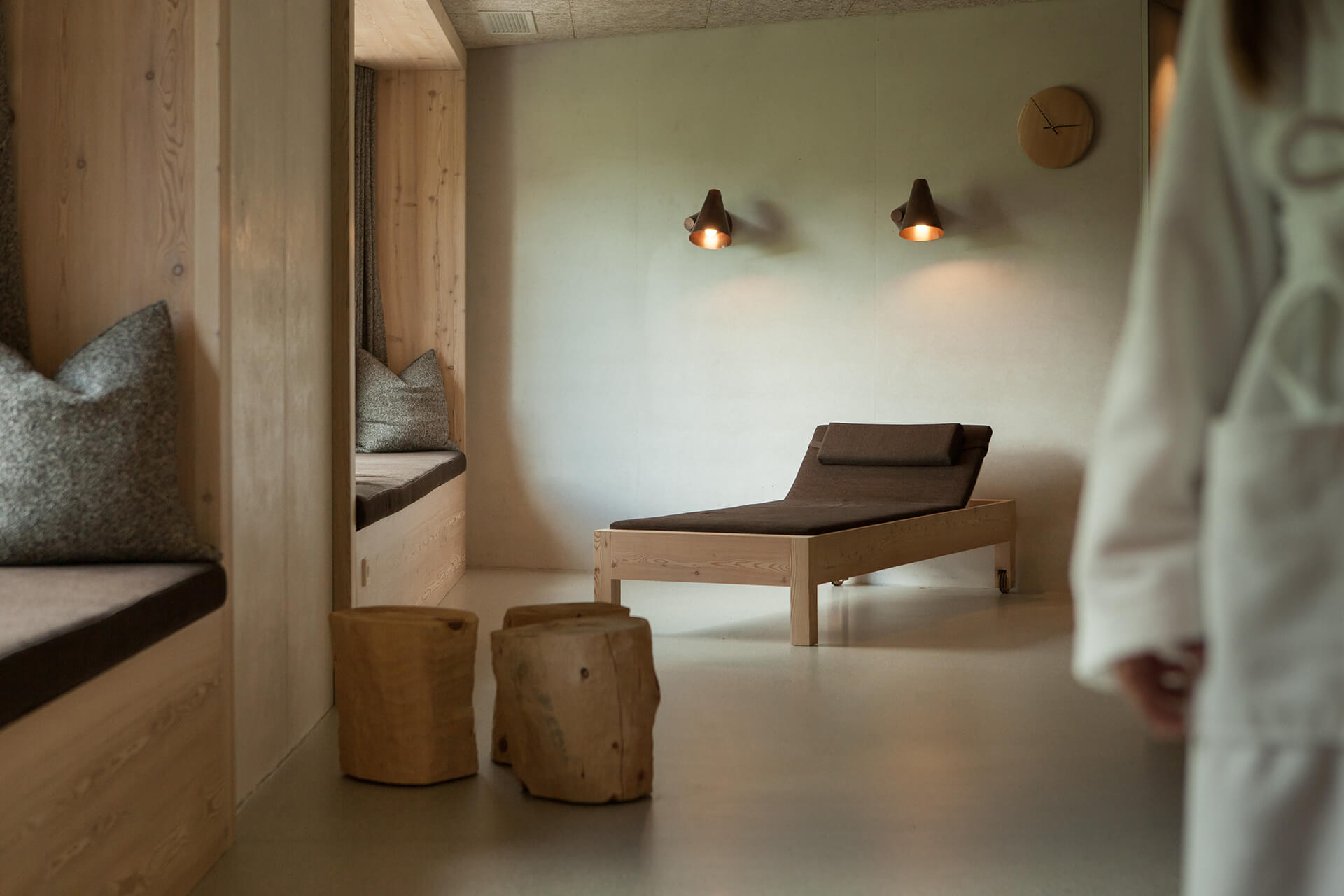 The locanda was born with her great-grandmother. Maria Steger and her sister Notburga were so adamant about turning a family chalet into a locanda that, after being denied a sales licence mainly for being two unmarried women in their early 20s, they travelled all the way to Innsbruck to push their case forward. The duo won, and over the years the eatery became known for its fine Tyrolese fare — the dumplings are the great favourite —, its selection of local wines and its attentive table service. In the 1960s, after expanding the locanda into a guesthouse in a 1,000-sq-m lot, her grandparents introduced the then-novelty of ensuite bathrooms. In the summer it was popular with Italians looking for good food and spotless facilities; in the winter students from the region would flock to the hotel for the settimana bianca holidays. But as the hospitality vein skipped a generation, it was Michaela who, in her 20s, took over the Bühlwirt a decade ago. And that’s when she first thought of an extension, in order to follow the trend that the region’s administrative bodies are pushing towards: maintaining numbers as to avoid overtourism, but adding market diversity to the pie, making South Tyrol a year-round destination. ‘Our goal is to remain special,’ explained Haller. That means not going just for winter sports and summer hiking fans, but also for specialised wellness lovers, gastronomic tourists and the holiest grail of them all: the prized design traveller.

That design hook came via Armin Pedevilla, an award-winning architect with family ties to the Hallers — Michaela felt so inspired by the sense of indoor nature the architect achieved in La Pedevilla, his own residence in nearby Mareo, that she recruited his firm for the project.

To truly experience the new wing, one needs to stand in the field behind the building, six storeys below: Pedevilla and his brother Alexander created a black quarry, a sloped structure poetically twisted to protect it from the wind yet bring the most amount of light possible to 20 balconies that seem intricately embossed against the woodwork. While the most visible presence of South Tyrolean nature is experienced through the panoramic windows, some of the walls feature clay mixed with limestone from a nearby mine, and the terrazzo is filled with pebbles from local sources; the copper lamps, created by South Tyrolean designer Harry Thaler, are a reference to the legendary Miniera di Predoi, while the stools are locally manufactured out of stone pine and the loden wool for the textiles bears the Moessmer seal. And then there’s the larch from Val Sarentino, a small green commune near Bolzano, that populates walls and floors, the interior and the exterior, and at one point even becomes a modernised and understated version of the traditional Tyrolese chair — the only place left larchless is, appropriately, the Finnish sauna in the wellness area. The entire project is a reduction of a hotel down to its functional and material essentials in a narratively elegant manner. ‘We were inspired by the nature around us, and there’s nothing artificial about nature,’ the co-owner said. ‘So the architectural message here is that this is an authentic hotel that means what it says and that doesn’t pretend to be anything it isn’t.’

And therein lies the second way of doing timelessness: to embrace the fact that there’s nothing trendy about nature and the natural — they both essentially stand and surpass the test of time and man. ‘So what’s the point of renovating every 10 years? It breaks my heart to see entire hotels thrown out the window so often,’ said Haller, bypassing the subtext of sustainability as something so logical that it bears no discussion. ‘We wanted a look and a set of materials that could be lived with for a long time — something anti-cyclical. These loden curtains are so well made that their colour won’t change under the sun. And that also stands for the rest of the hotel.’

The Bühelwirt, simply put, is a place judiciously suspended in time — no small feat given the trend obsession and made-to-be-visible tech-oneupmanship of today’s boutique hospitality industry. The Pedevilla brothers have turned this hotel into their version of Marcel Breuer’s Flaine ski resort, with larch and subtlety en lieu of concrete and brutalism: it’s proof that there’s always room to rethink the givens of Alpine architecture.

The accolades came in, from a German Design Award to an AIT. But most importantly, the target audience came with them. The first year after the renovation, one in ten visitors was an architect; the second year, that number more than tripled. Beyond Italy and the German-speaking countries around it, guests now also come from the UK, the US, Australia and New Zealand, Malta, Poland and Estonia.

To say that good design has proven valuable for the tiny hamlet in Valle Aurina would be an understatement: it has, indeed, boldly established its place on the tourism map for specialised travellers. ‘We had some guests from the United States who were doing a tour of the country,’ Haller remembered. ‘And they told us they were visiting the three most architecturally important places in Italy: Rome, Florence… and San Giacomo.’

THE TAKEAWAY
Mindless Instagrammability has altered the baseline for hospitality in such a deep way that there are now design-hotel tropes in every category, and the offerings become practically indistinguishable from one another. The Bühelwirt shows a successful way of bucking that, by going for a more considerate approach: in a rapidly changing world, they offer the lost comfort of design stability.