Five designs for the displaced

For the Jan/Feb issue of Frame magazine, we invited designers and creators to address the record numbers of people – whether asylum seekers or digital nomads – who are expanding the meaning of ‘home’ in a foreign land.

Economic, ecological and political issues around the world are causing mass population displacement, which is currently one of the most pressing matters globally. Whether referring to forced displacement caused by war, violence and politics or to the exponential number of digital nomads and economic expatriates seeking better opportunities abroad, we are seeing migration on an unprecedented scale.

While a sensitive topic that requires the involvement of more than one creative discipline to offer viable solutions, designers and architects can offer creative suggestions and spark further conversations in addressing displacement. In addition to the concepts created for the Challenge section of Frame 120, here are five designs that offer the displaced a sense of home and belonging.

As part of the MADWorkshop Homeless Studio, designers Aleksandr Drabovskiy, Ricky Lo and Sohum Bagaria reinvented the role of the shopping cart. Developed by Martin Architecture and Design Workshop in partnership with the University of Southern California School of Architecture (USC), MADWorkshop Homeless Studio explores the architect’s role in solving homelessness in Los Angeles. 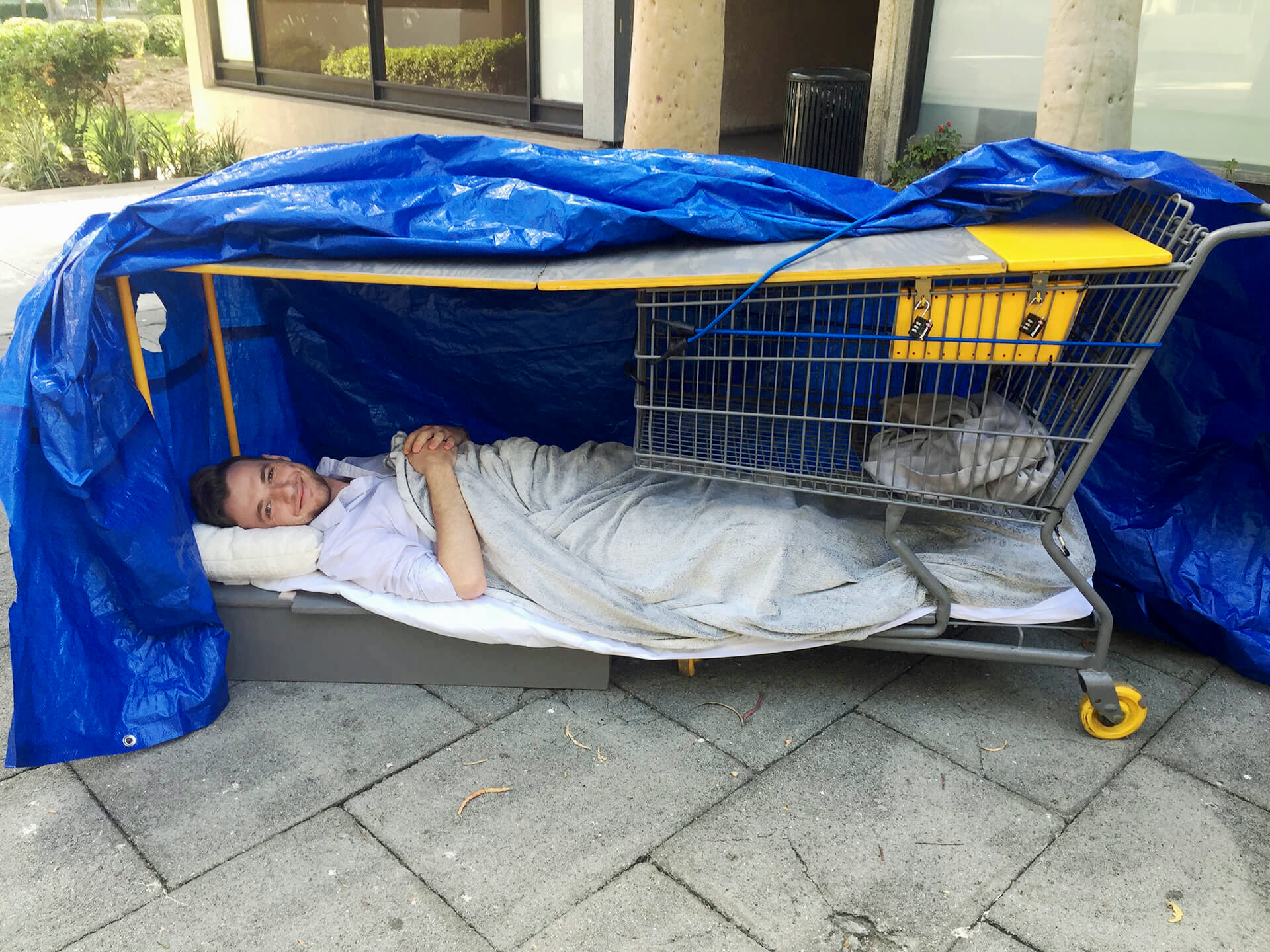 By hacking the structure of a shopping cart using conventional, inexpensive materials such as Velcro, ropes and tarps, the designers explored various modifications that add functions beyond that of mobile storage. An extension on the lower part of the cart makes for a portable bed that elevates the person off the ground, while a wooden cover is used to enclose the cart for added security. When expanded, the cover offers protection from the elements and a surface for eating. The system can be cheaply mass produced, offering a realistic, practical improvement to the lives of the homeless population.

Liberation of the Kitchen by Alejandra Calderón

For those of us who live in short-term rental apartments year after year, the emotions and social connections most often associated with a kitchen space must be left behind with every move. By fragmenting the kitchen into separate modules, Alejandra Calderón enables inhabitants to carry their kitchens and their memories with them. 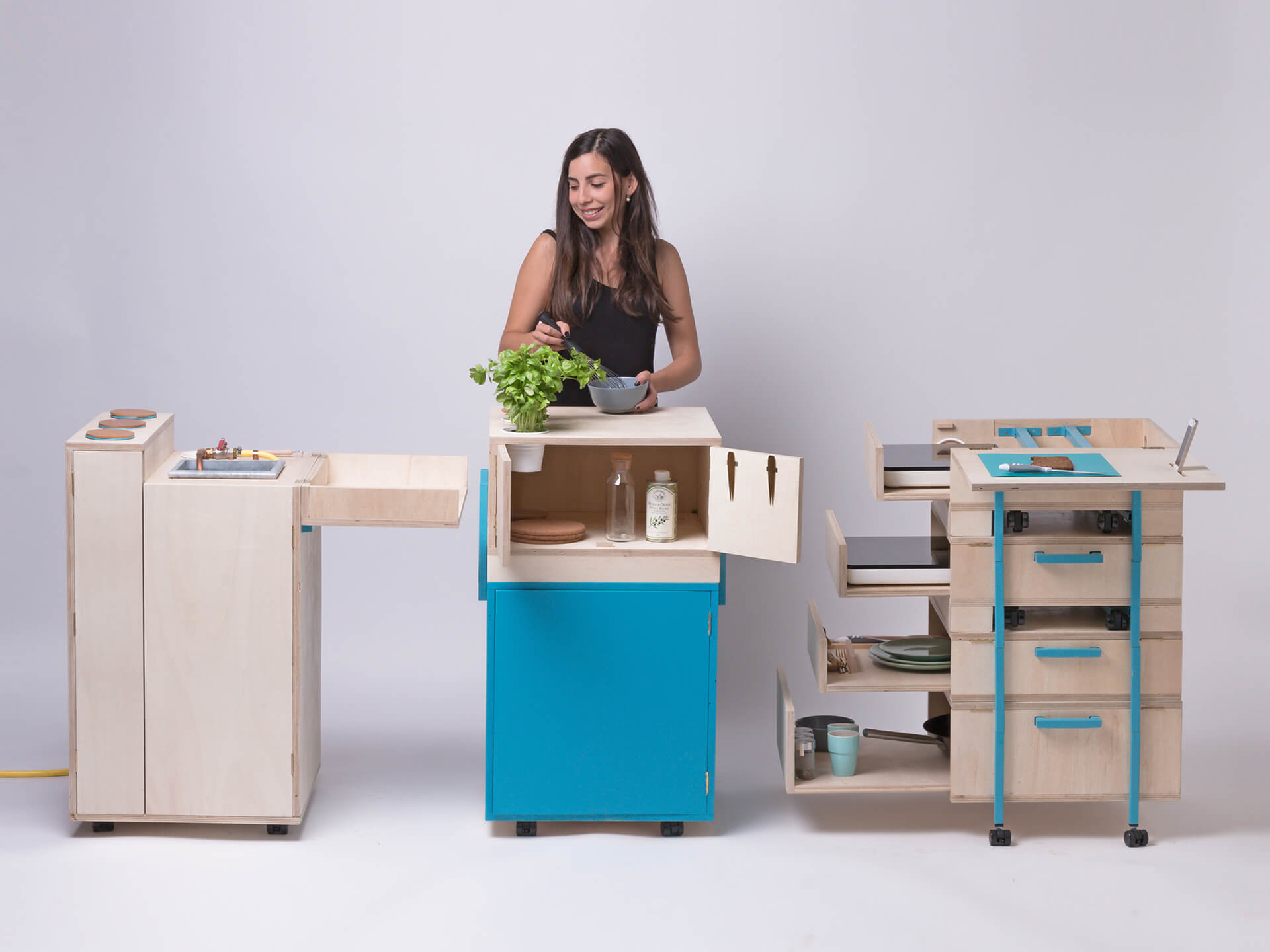 Each module contains different elements of the kitchen, from a fridge and cooktop to a sink, bin and drawers, all of which can be stacked in different configurations according to the user’s individual needs. The design blueprints are open source – provided for free on the project’s website for anyone to build and adapt and make their own. 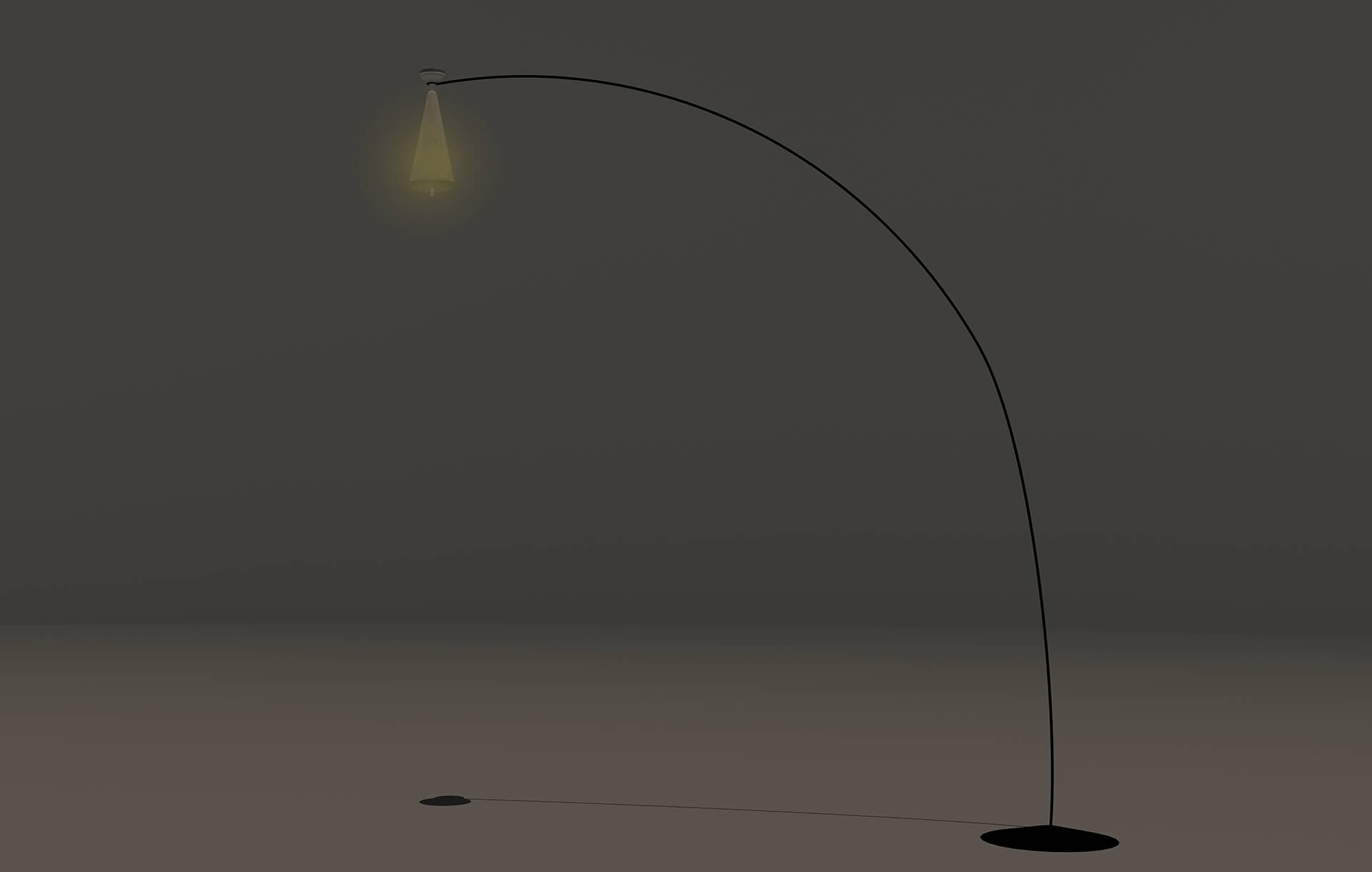 Focusing on the association of particular scents with memories of home, Agie Katsenis presents Oneiric Hive. An object designed for the bedroom, Oneiric Hive triggers cherished memories by stimulating olfaction while a person falls asleep. Resembling a floor lamp, the object gradually inflates when set in a dark environment, taking the shape of a hive that orbits around the stand while emitting a warm light and soft scent until the person falls into deep sleep. Eventually, the light fades and the object returns into its initial form.

How can design make us feel at home? by Lydia Manitsidou

Architect Lydia Manitsidou tackles the topic of involuntary displacement by proposing a flexible module system that can be composed in different ways according to individual needs, culture and habits. The series of modules cater to different uses – from sitting, sleeping and eating to washing and comforting – and are available in customized materials and colours. 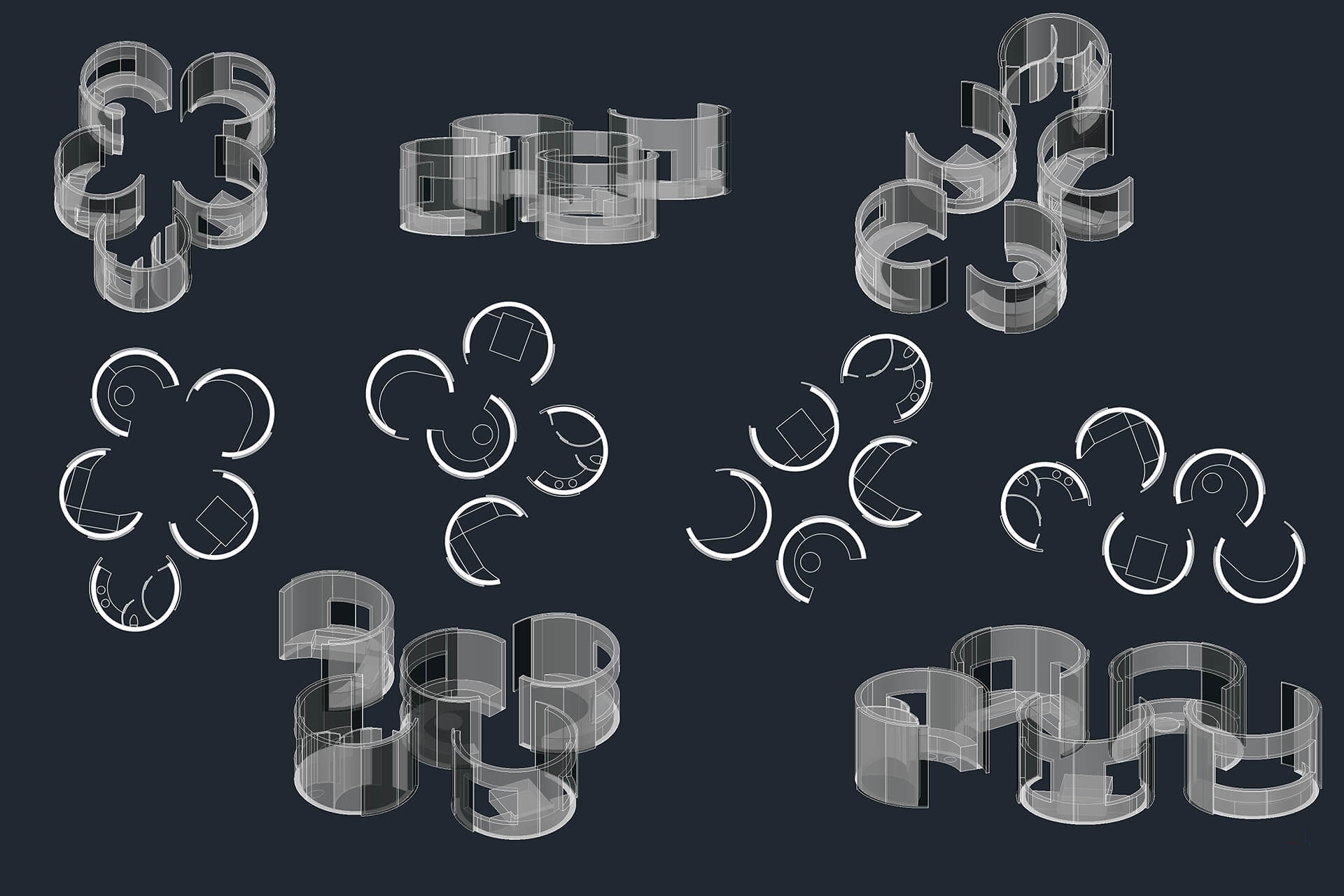 In addition, in the design, windows acquire a double use where they can be transformed into display screens. Playing with the concept of a window to the world, inhabitants can use the windows to communicate with loved ones or to view images from their home countries and neighborhoods.

The frequent relocation associated with digital nomads and work expatriates often necessitates minimal personal possessions and the tenanting of furnished apartments for short periods of time. Maria Fernanda Duarte addresses the lack of personalized intimacy to be found in generic pre-furnished living spaces with Consuming Interiors, a furniture collection that can be ‘consumed’ by its user. 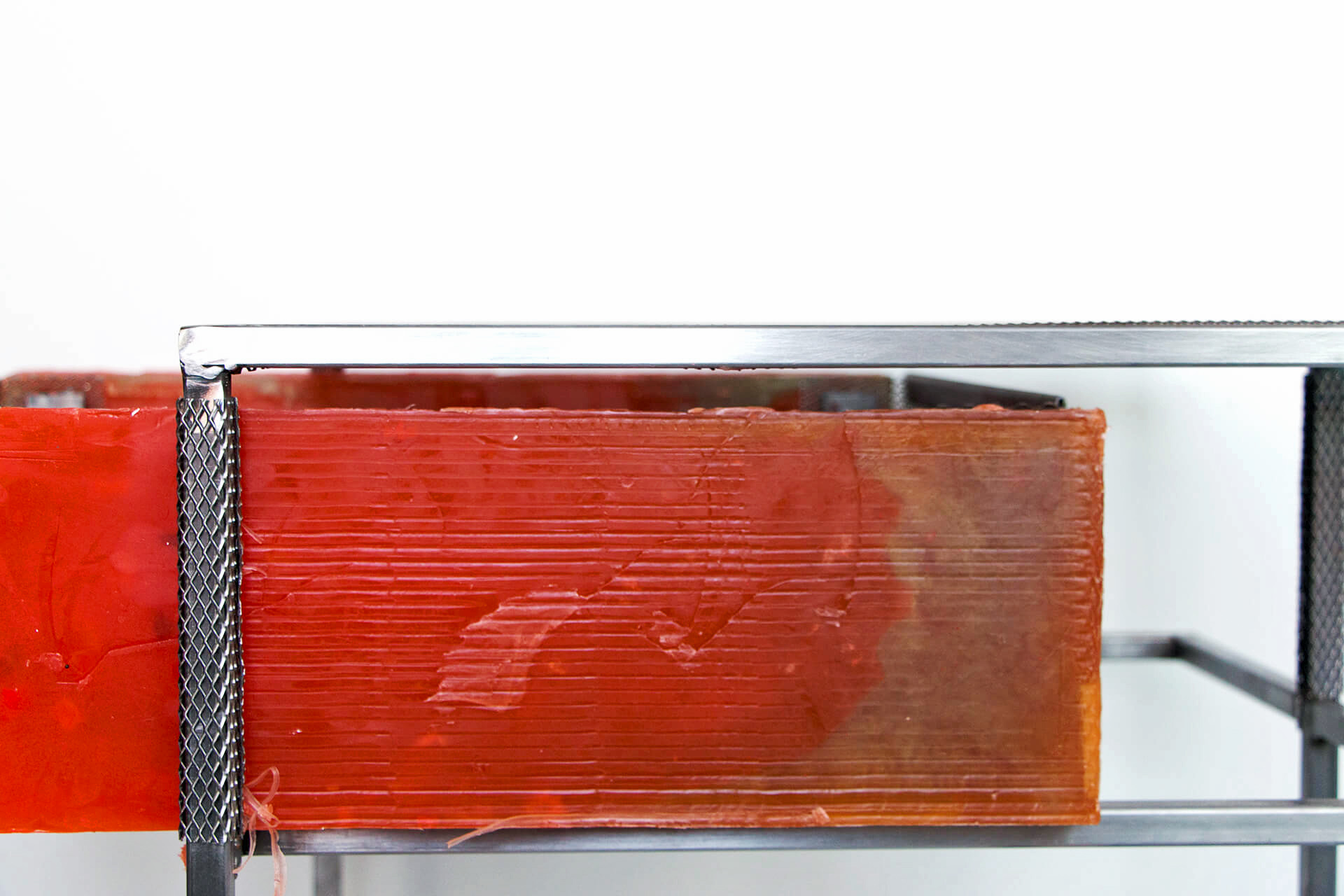 The metal pieces of furniture, including a drawer, wardrobe and a roll top desk are finished of with colourful blocks of scented soap. With the movement of opening a drawer or sliding a door, the metal scrapes off a layer of the soap’s surface. The scent associated with each object embodies a unique memory from each space.

Five concepts addressing displacement are created exclusively for Frame are featured in Frame 120, which is available now in the Frame Store.