For the first time ever, Louis Vuitton invests in in-store hospitality – in Osaka

Haute couture and haute cuisine? At Louis Vuitton’s newest store Maison Osaka Midosuji, leathergoods and apparel emblazoned with the famed monogram are only part of the offer. The Japanese flagship – designed by architects Jun Aoki and Peter Marino – is distinguished as the first-ever Louis Vuitton location with a café and restaurant. Housed within the maison, Café V and Sugalabo V are headed by the celebrated chef Yosuke Suga (just a few months ago, Suga’s Tokyo Sugalabo was deemed to be one of the world’s best restaurants at a ceremony held at Paris’ Ministry of Foreign Affairs).

Louis Vuitton’s decision to incorporate hospitality spaces in the Osaka store comes with considerable precedence. As we reported in Frame 129, luxury retail’s merge with luxury hospitality has been a major market shift in recent years, foreshadowed nearly 20 years ago by the opening of Australia’s Palazzo Versace, the first fashion-branded hotel. Branded spas, cafés, restaurants and hotels have followed, from luxury brands such as Guerlain, Fendi, Baccarat and Saint Laurent. In April 2019, LVMH invested 3.2 billion US dollars to acquire Belmond Hotels group. So it comes as little surprise that the ‘LV’ in LVMH should now find itself in the business of in-store food and drink. 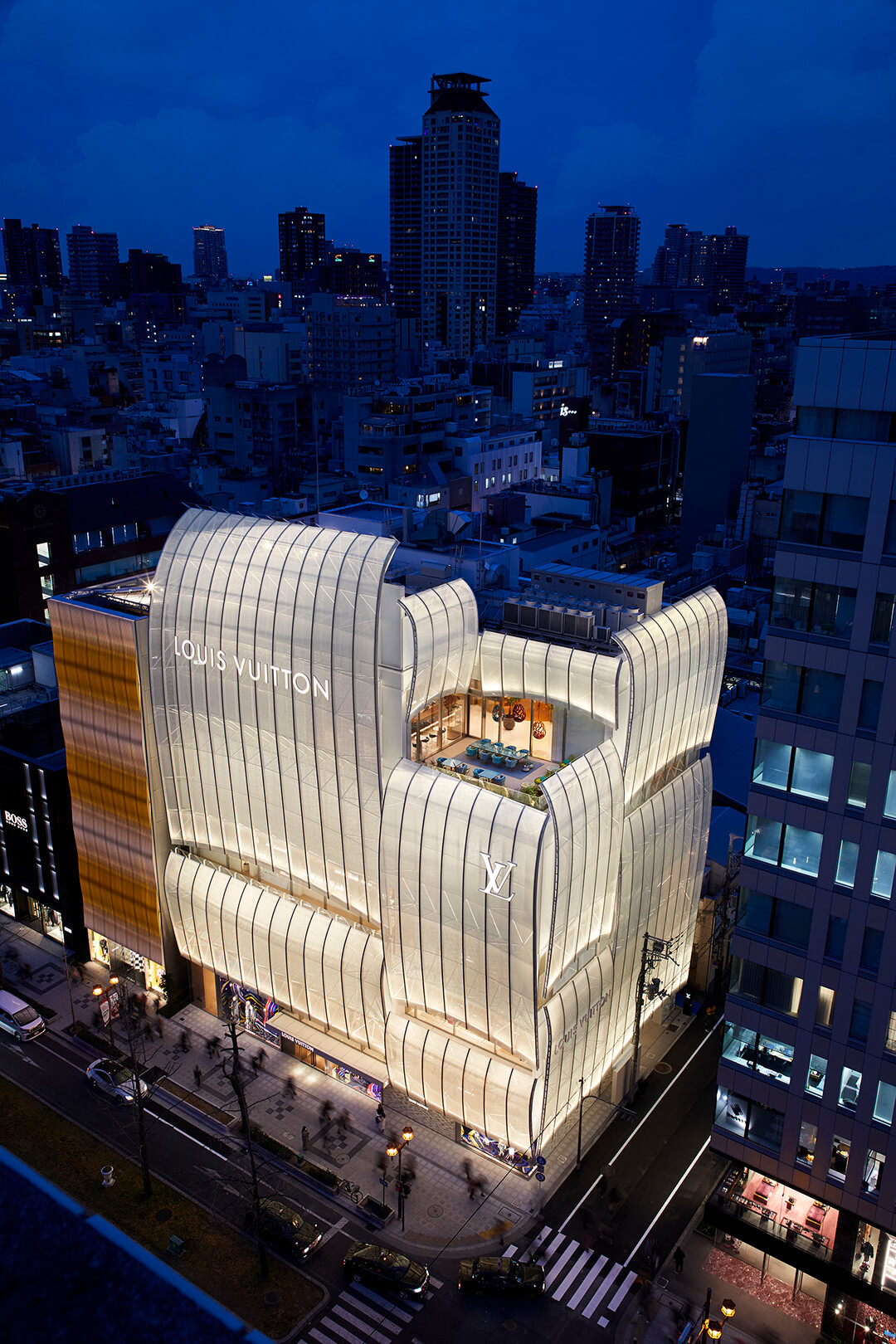 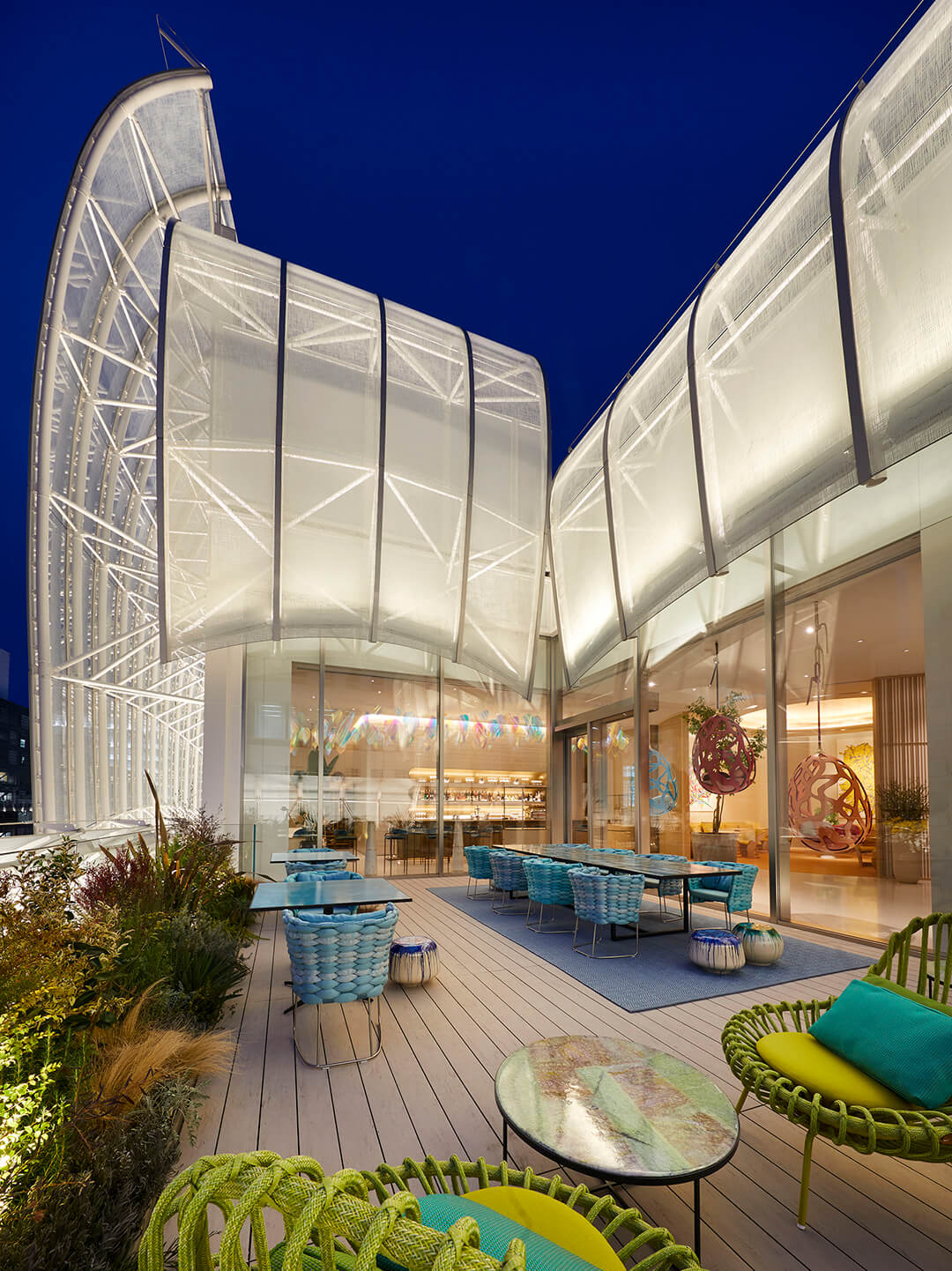 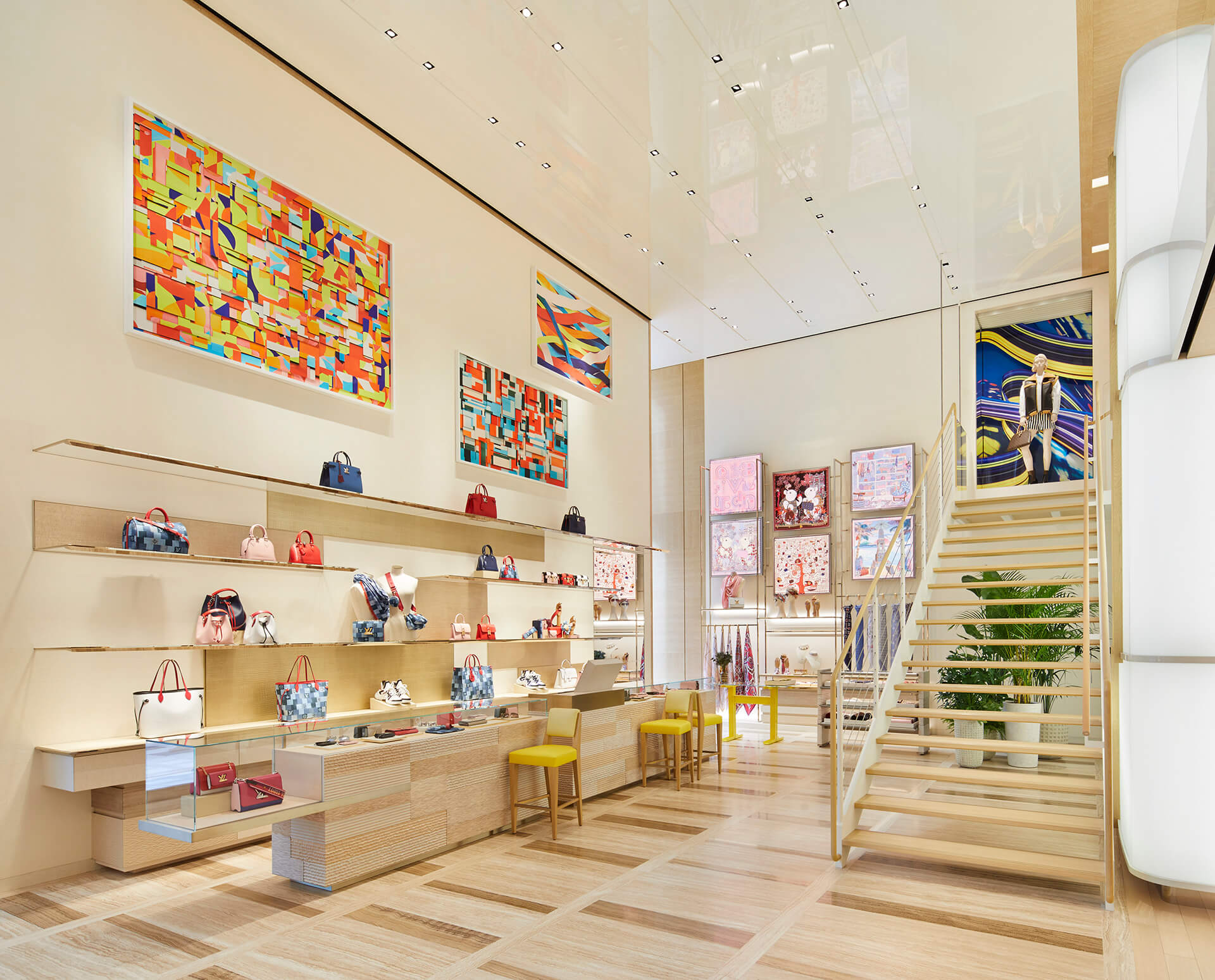 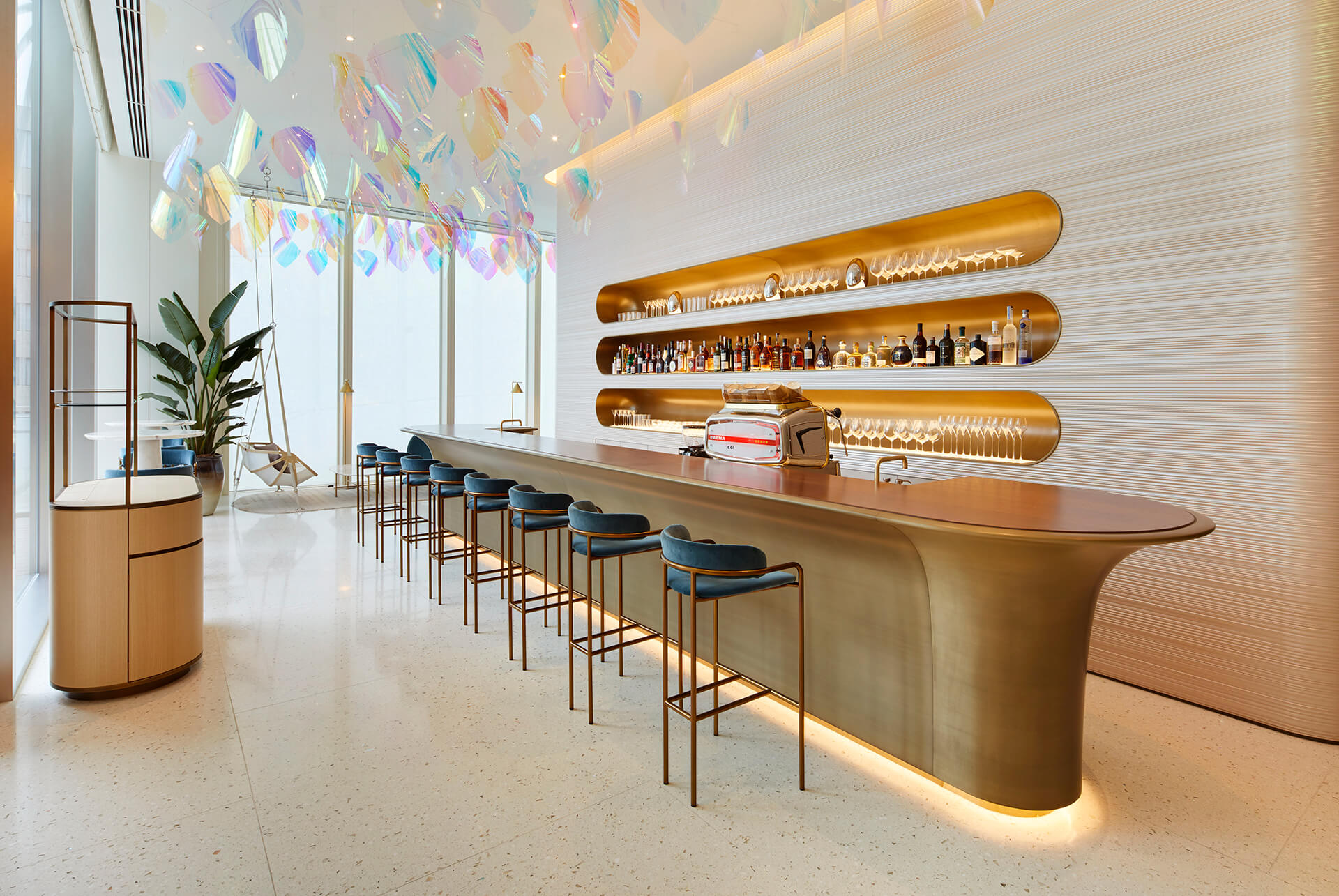 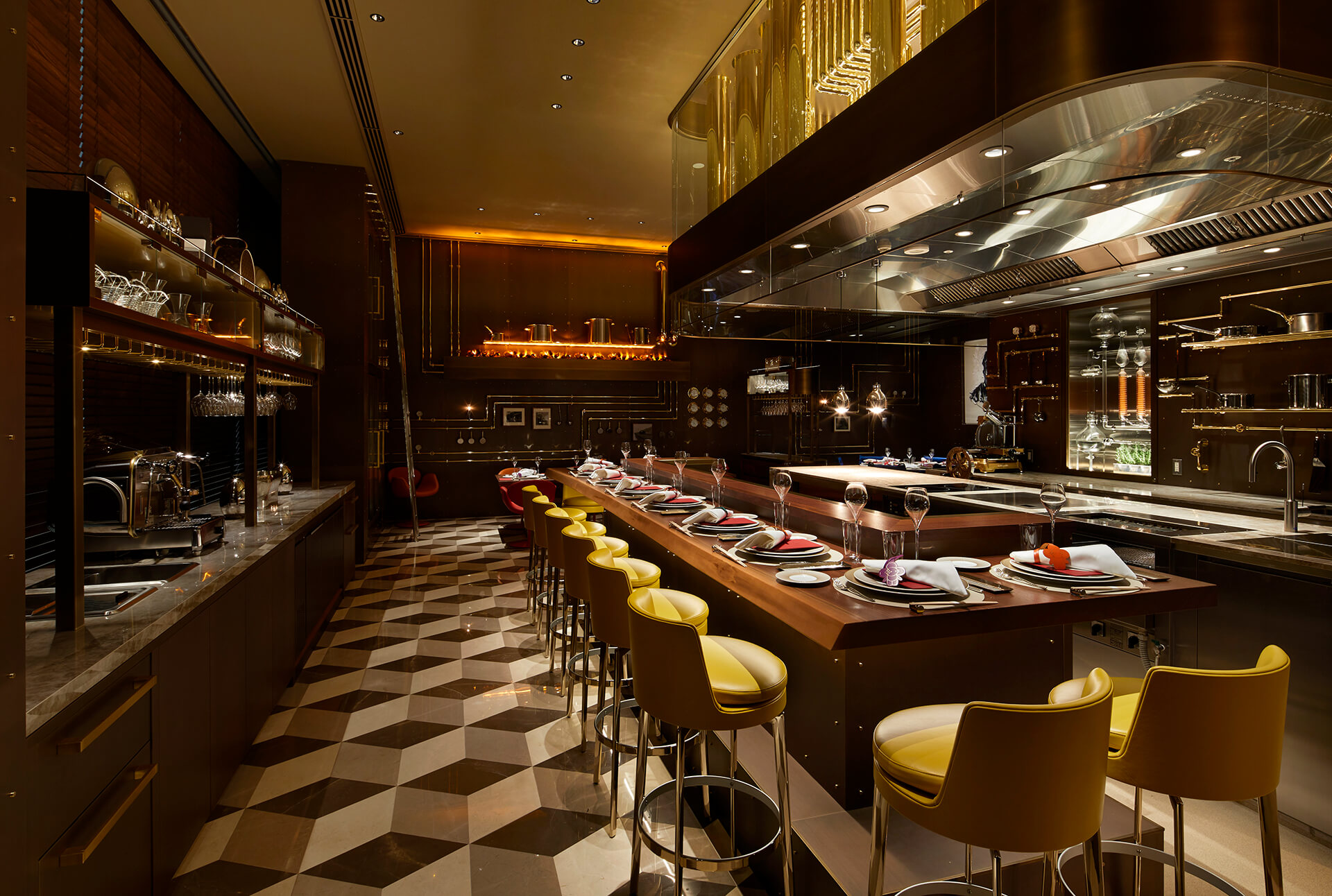 What could be considered surprising is where Louis Vuitton opted to launch this first café and restaurant. Bloomberg reported last fall that CEO Michael Burke said in a meeting with analysts that the company is seeing ‘unheard of growth rates’ in nearby China, so why not there or home base France for starters? As a spokesperson for Vuitton explains, the new four-floor store reflects Osaka’s heritage as Japan’s most important port and highlights the city’s growing role as an international travel hub.’ The maison first opened a store in Japan in 1918, and Osaka Midosuji now takes the title as the largest Louis Vuitton location in the country. A 2004 Assouline-published book Louis Vuitton Japan: The Building of Luxury underscored this historical relationship that the company has with the country, chronicling how industrialist Kyojiro Hata turned Louis Vuitton into the most sought-after brand in Japan after coming on board in 1976.

Aoki has a designed number of landmark Louis Vuitton locations, including that on NYC’s Fifth Avenue. The airy white façade he developed for Maison Osaka Midosuji appears to billow out into the urban environment like the sails of a ship (specifically, the traditional Higaki-Kaisen cargo ship), a nod to the city’s sea-faring history. Near the entry point, a digital ‘sculpture’ showcases the photographic work of artist Kento Cobayashi. Indoors, Marino’s work continues Aoki’s architectural tropes, the vast, voluminous spaces displaying a use of traditional Japanese materials such as woodwork and origami washi paper. 20 contemporary artworks selected by Marino introduce bursts of colour to the store; a work by Gregor Hildebrandt reflects Osaka’s relationship with its ‘cherished bay’.

Le Café V can be found on the top floor. But, while Sugalabo adjoins the café, the entrance’s location isn’t so straightforward: a secret, speakeasy-style door leads the way into the ambient open-kitchen space, designed in total aesthetic contrast to the bright, sleek Le Café V.