From hidden houses to Nicole Kidman shade, this architectural book has many surprises

Officially, Built Unbuilt is a book that revisits 16 years of Julien De Smedt’s work, from the inception of the PLOT architectural practice with Bjarke Ingels in 2001 to the work of JDSA and the creation of Makers With Agendas, the Copenhagen design studio he co-founded with William Ravn in 2013. The Built section provides an overview of De Smedt’s built work; Unbuilt is a selection of projects that haven’t made it to the other side.

But unofficially, the projects featured in the book reveal stories of serious casualness and casual seriousness, of light paradoxes and steep slopes. De Smedt even reveals hilarious and humbling anecdotes, such as the one where the weight of Hollywood glamour stepped all over his proposal for a Lars von Trier event (more on that below).

Here we share four of the architect’s own highlights from the book – which, by the way, is available for purchase in our web store. 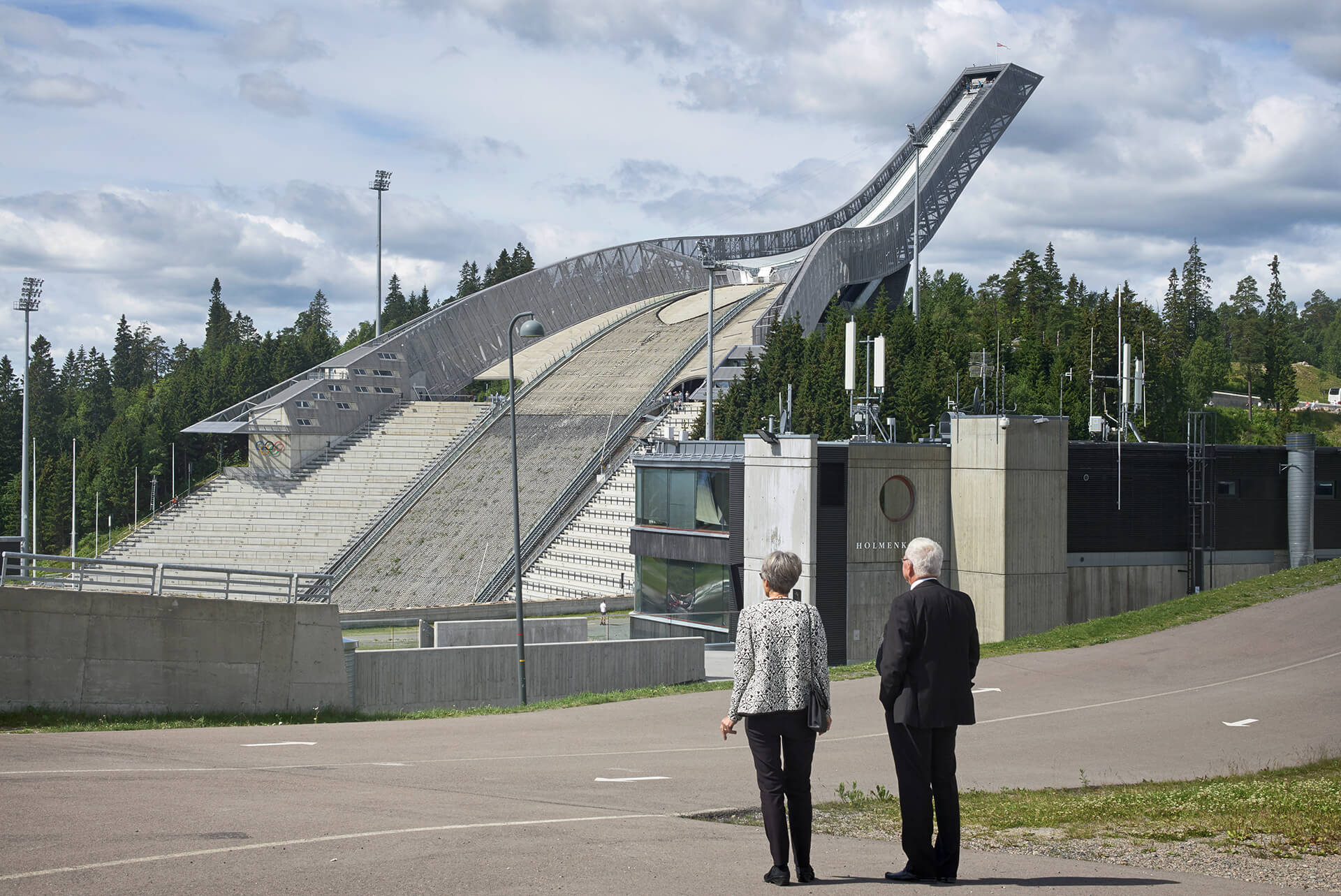 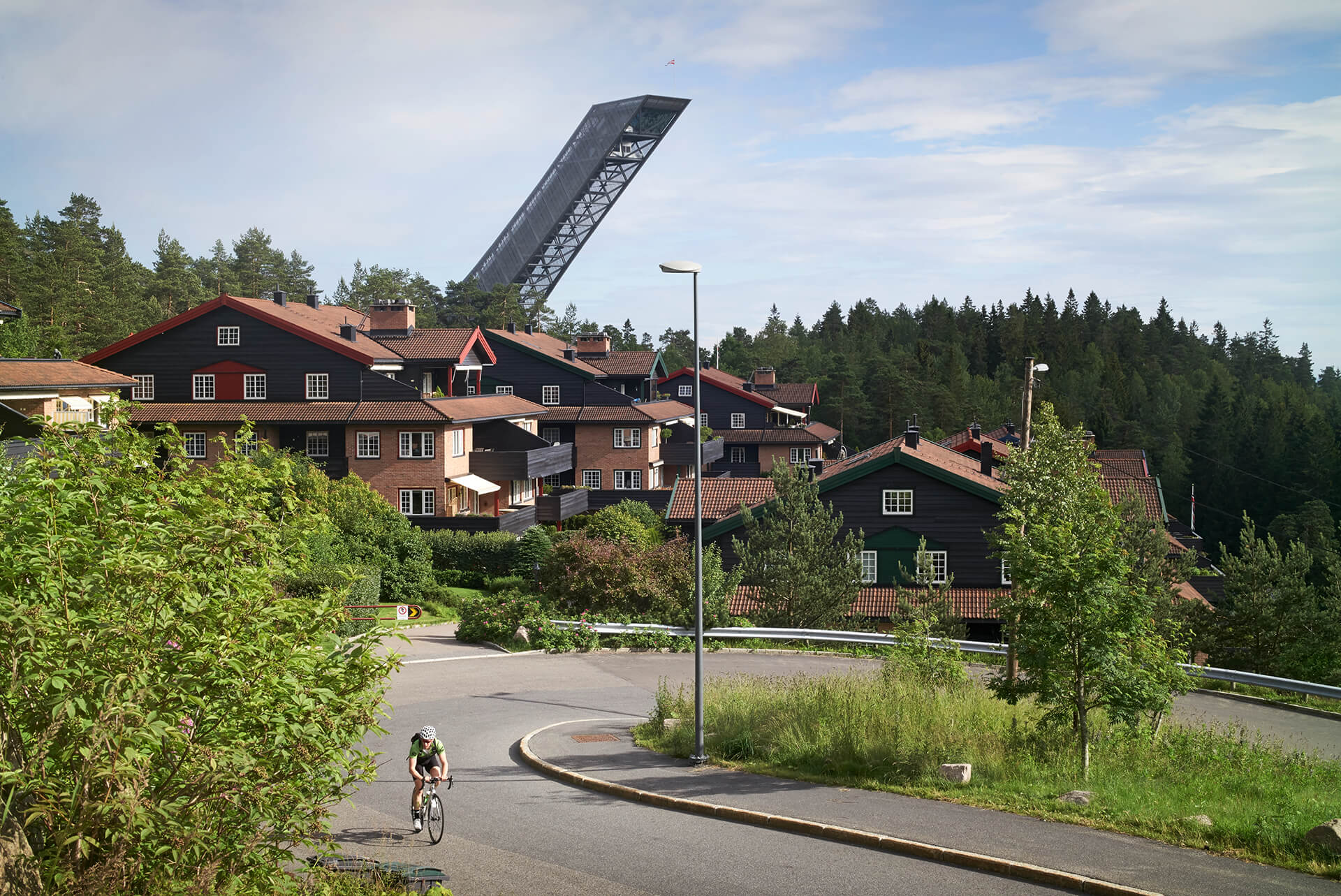 THE HOLMENKOLLEN SKI JUMP IN OSLO (2011)

Along with Wimbledon and the Wembley Arena, the Holmenkollen Ski Jump is the world’s most visited sports facility. In September 2005, the International Ski Federation decided that the current hill did not meet the standards, an in 2007 we won the open international architecture competition to renew the facility.

Rather than having a series of dispersed pavilions on site, the design unifies the various amenities into one holistic diagram. The booths, the wind screens, the lobby, the lounge for the skiers, the souvenir shop, the access to the existing museum – everything is contained into the shape of the jump. The simplicity of the solution improves the experience of the spectators and brings clear focus to the skiers.

Its 69-metre cantilever makes it the longest of its kind. Paradoxically, the cantilever was the only way to lighten the beam structure and lighten the budget requirements, while minimising tremendously the environmental impact of the project onto its site. Atop a platform where visitors can take in views of Oslo, the fjord and the region beyond, thus inverting the concept of the icon: the surroundings became the manifest. 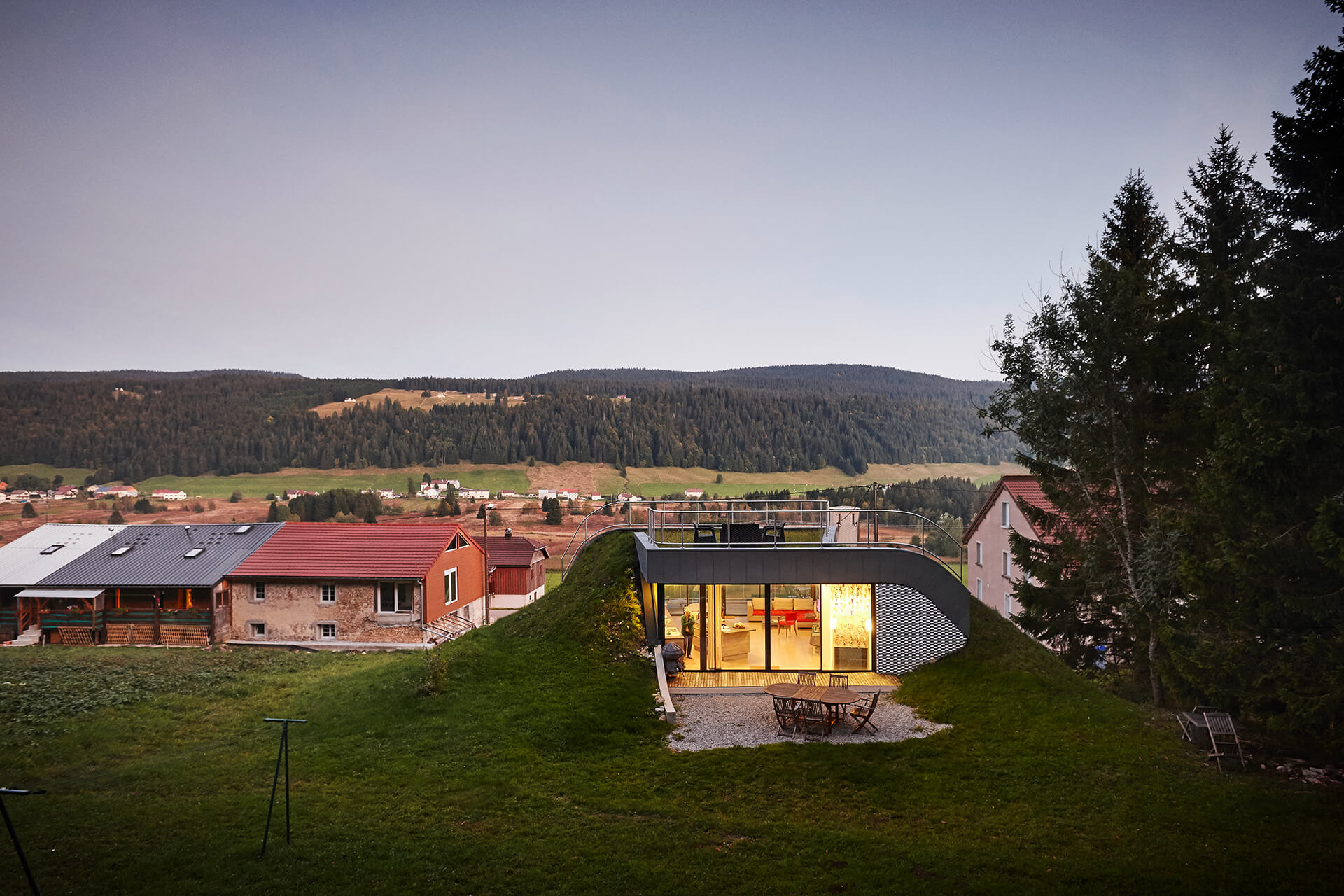 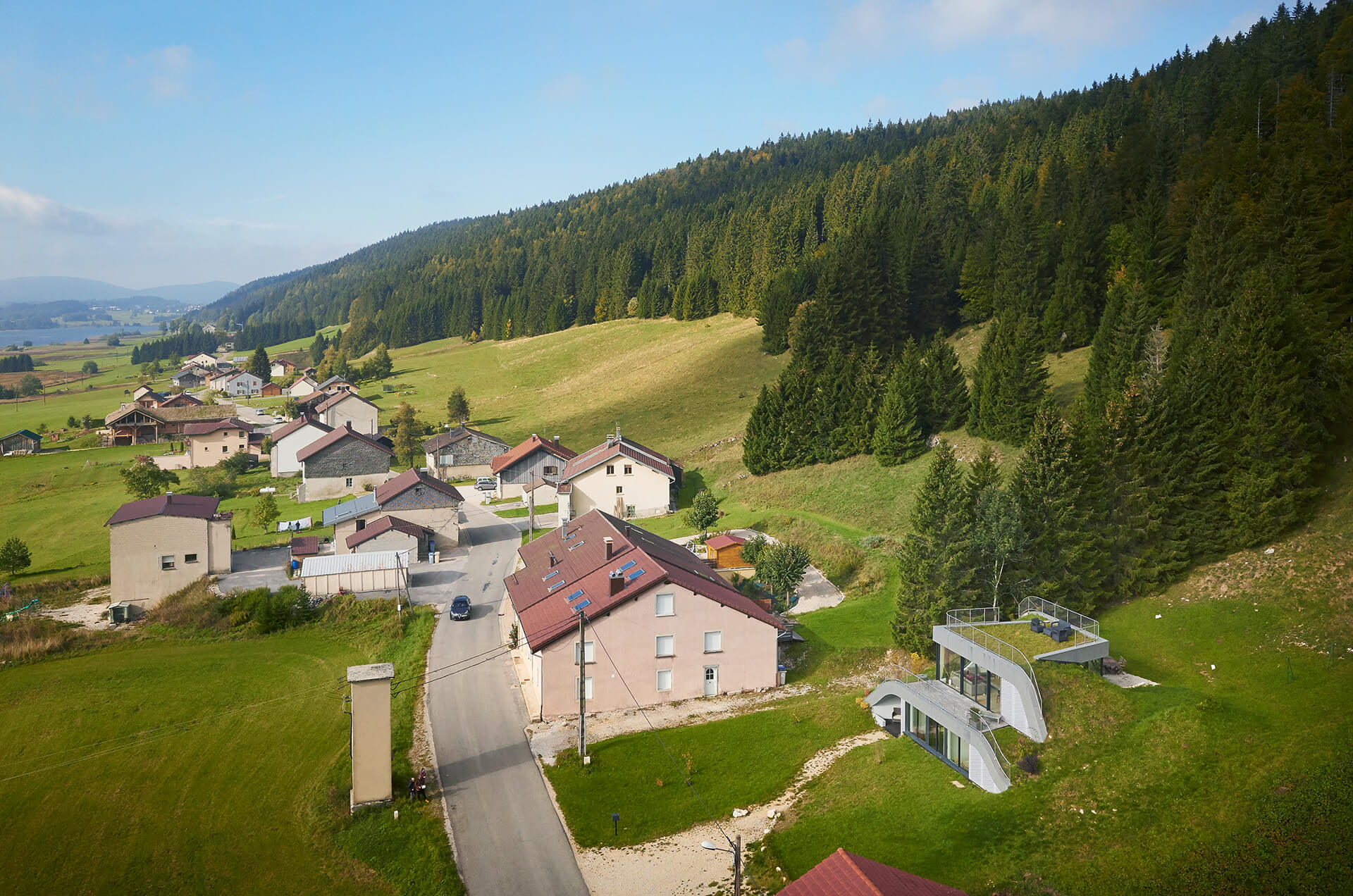 Situated on the northern slopes of a Jurassian valley, this small house embraces its landscape. From the inside, floor-to-ceiling windows offer views of the valley: the image of the valley becomes a backdrop for domestic activity. From the outside, the house blends into the landscape, reducing its visual impact to an elegant undulation echoing the surrounding hills.

Parts of the house’s northeast and west façades are embedded into the hill, while the entire south façade opens up onto the landscape. An accessible green roof merges with the ground, creating continuity with the landscape. The green façades and roof provide natural cooling in the summer and insulation in the winter months.

The house is composed of two floors. On the ground floor three bedrooms face towards the south while on the north side storage spaces and toilets are anchored in the hill. On the upper level an open space functions as the kitchen, living and dining room. 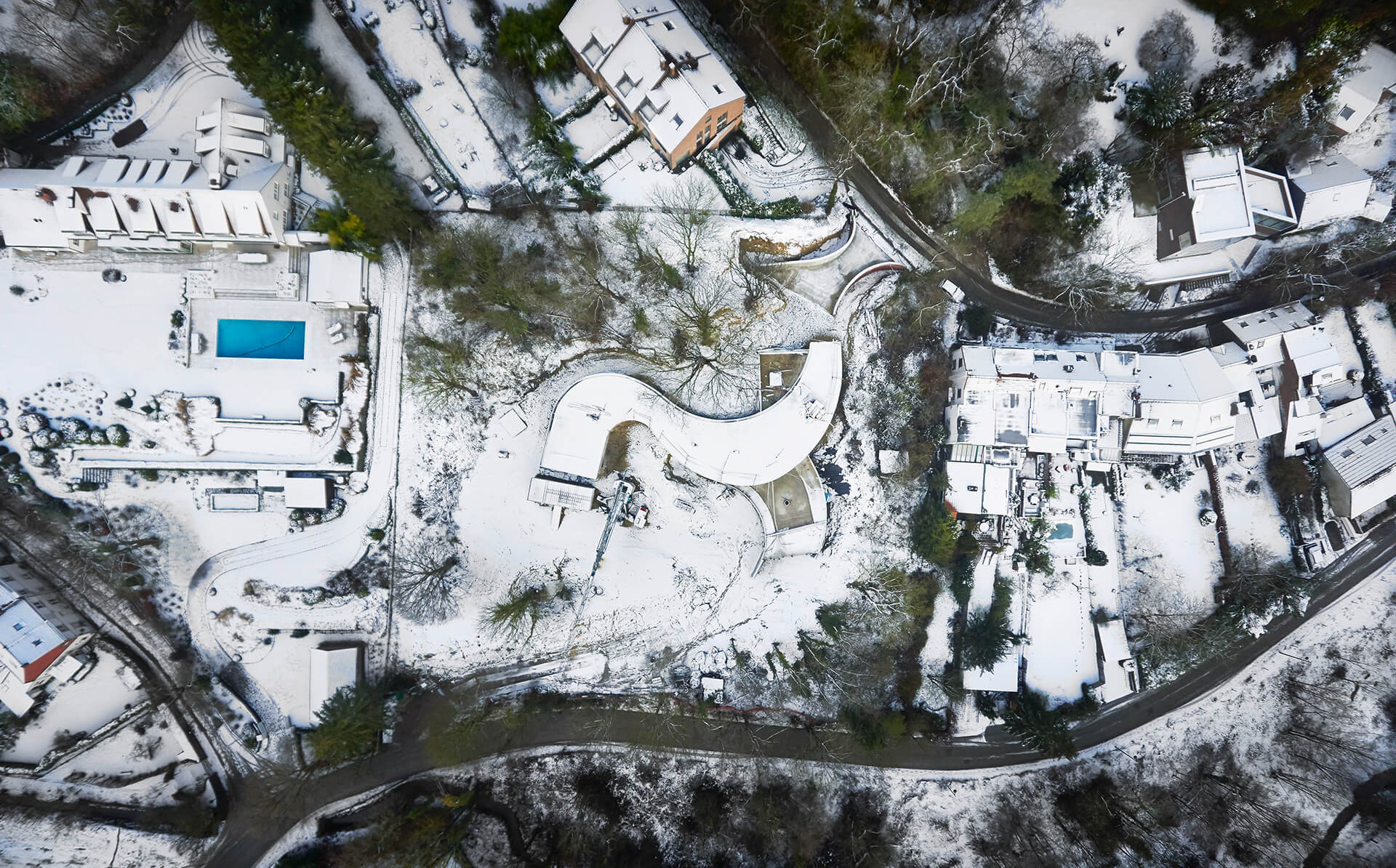 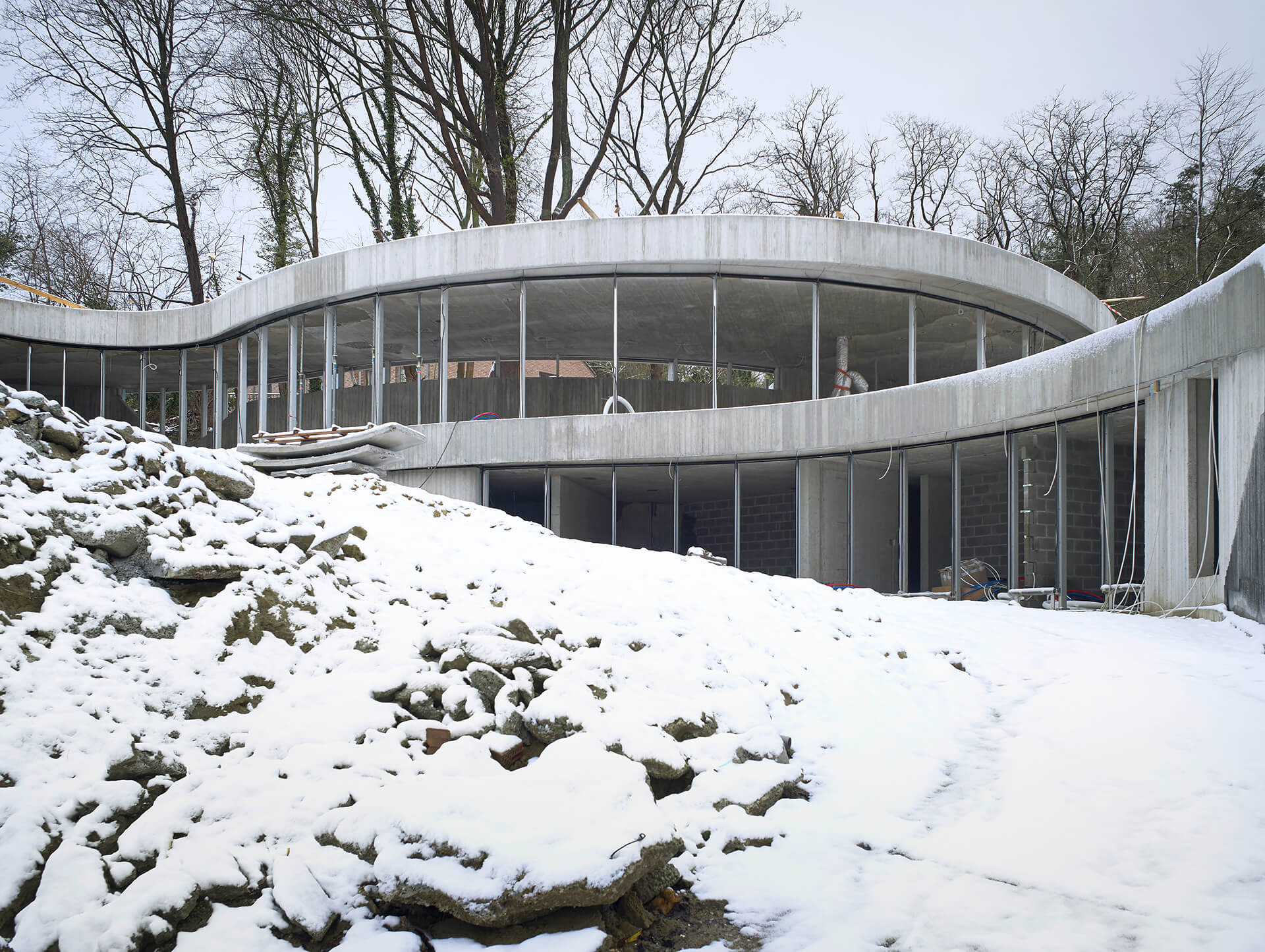 Located in a quiet and wooded area of Brussels, the Secret House blends into its sloped site. The domestic programme meanders along the natural topography, slowly descending, weaving in and out of the hill to catch maximum views and sunlight while avoiding existing trees.

The snake-like anatomy of this house wraps around itself to create intimacy for the master bedroom and to embrace the swimming pool facing the children’s bedrooms. The façade uses a curtain wall system to create one long, generous window towards the view. The house complies with ‘passive’ energy standards, minimising its impact on the environment. 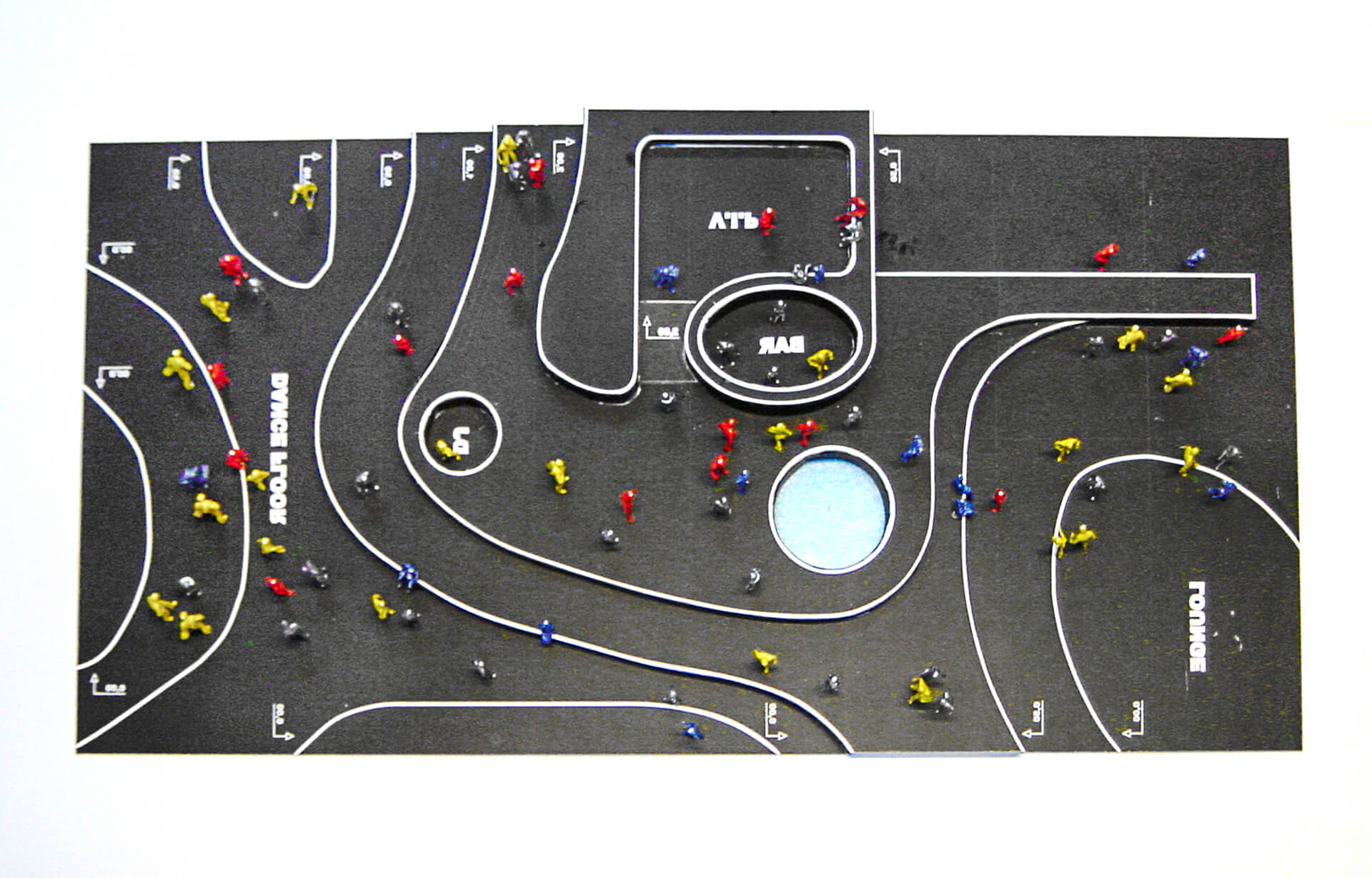 About the time when Lars von Trier’s Dogville was nominated for Cannes, in 2003, our relationship with [film company] Zentropa suddenly rebooted. The company decided to throw a party on the Croisette and my friends Jonas Hartz, Jacob Wildschiødtz and Satoru Hinoue were hired to arrange the event. They reached out to me to design the setting. It was a hilarious, exciting and somehow disturbing experience to work on such a frivolous event. But we had seen the movie at a private screening and we loved it.

We all started brainstorming about the party and quite quickly it became clear that the movie itself was the answer to a low-budget, one-off event: we decided to arrange the room using white markings delineating where the various spaces were laid out. The ceiling would be a huge mirror, allowing partygoers to read the layout of the place.

As we approached the deadline, we heard that the event was cancelled. The rumour was that Nicole Kidman had insisted on Zentropa flying her to Cannes in a private jet, a cost equivalent to the party’s whole budget. We never found out the truth. I hold no grudge against Nicole Kidman. She deserved it. Though we’re pretty sure shed’ rather have had the party we had planned for her.

Built Unbuilt is available in our web store – currently with a 30 per cent discount due to our Holiday Sale.