A commercial city in China’s Zhejiang province, Yiwu is home to 1.2 million inhabitants. Represented in that population are a great number of Arabs and Hui people, a Chinese ethnic group which largely practices Islam. To better serve this community with diverse selections of clothing and ornamentation, retailer Jiamila Fashion has opened the doors of a 430-m2 flagship at Yiwu’s central Wanda Plaza, designed by architecture firm PMT Partners.

One of the client’s foremost priorities was to ensure that the space would have a relationship to Muslim culture and local features, explains a spokesperson for PMT Partners. The architects referred to the words of long-time Baumeister editor-in-chief Paulhans Peters as they worked on the project: ‘Alienation does not mean imitation or adherence of a certain style,’ wrote Peters in an article entitled Analogous Architecture: Radical Proposal for a Poetic Architecture. ‘It is more of an improvisation. Even though it is implicitly expressed, the eternal quintessence in the classical can still be universally perceived.’ 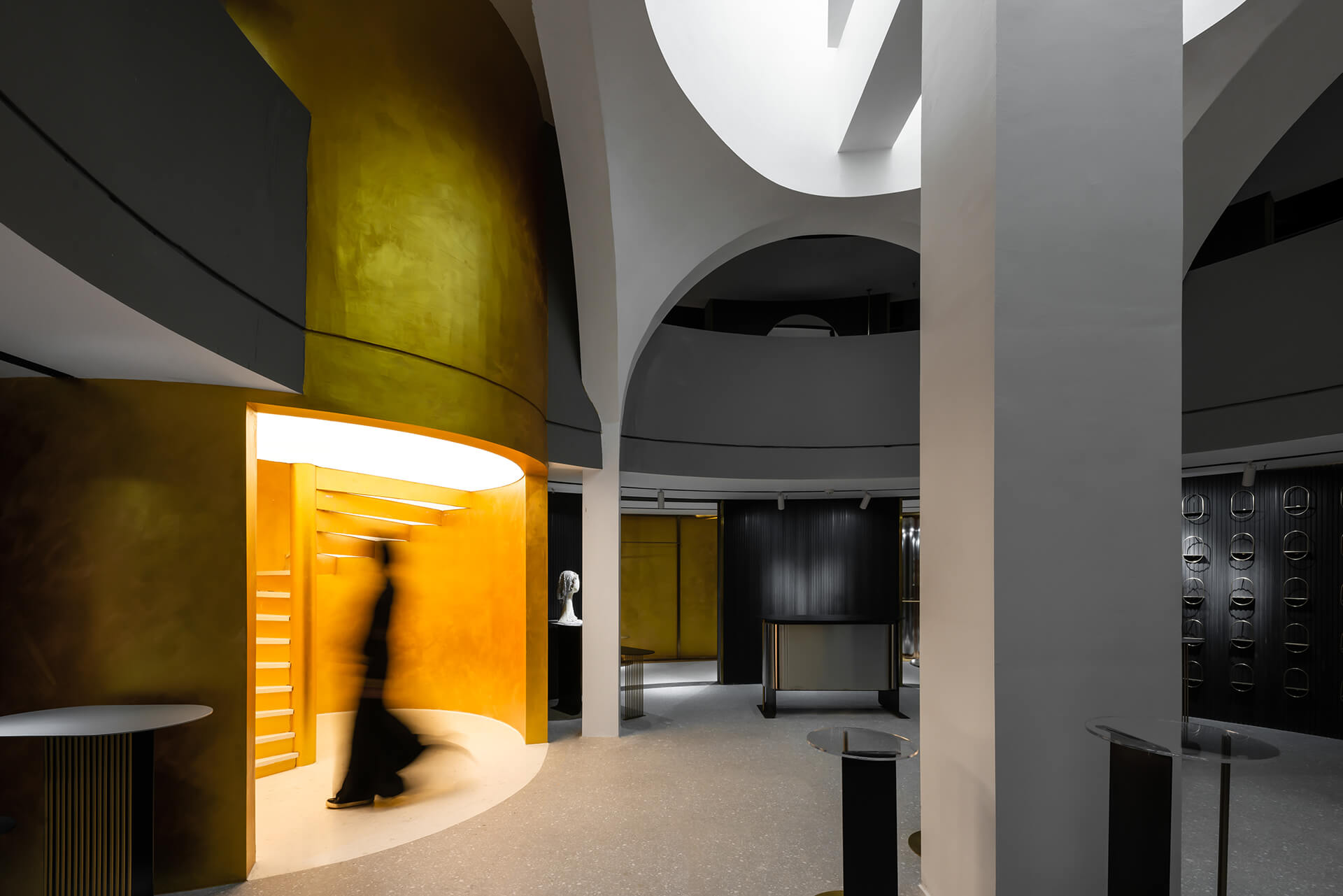 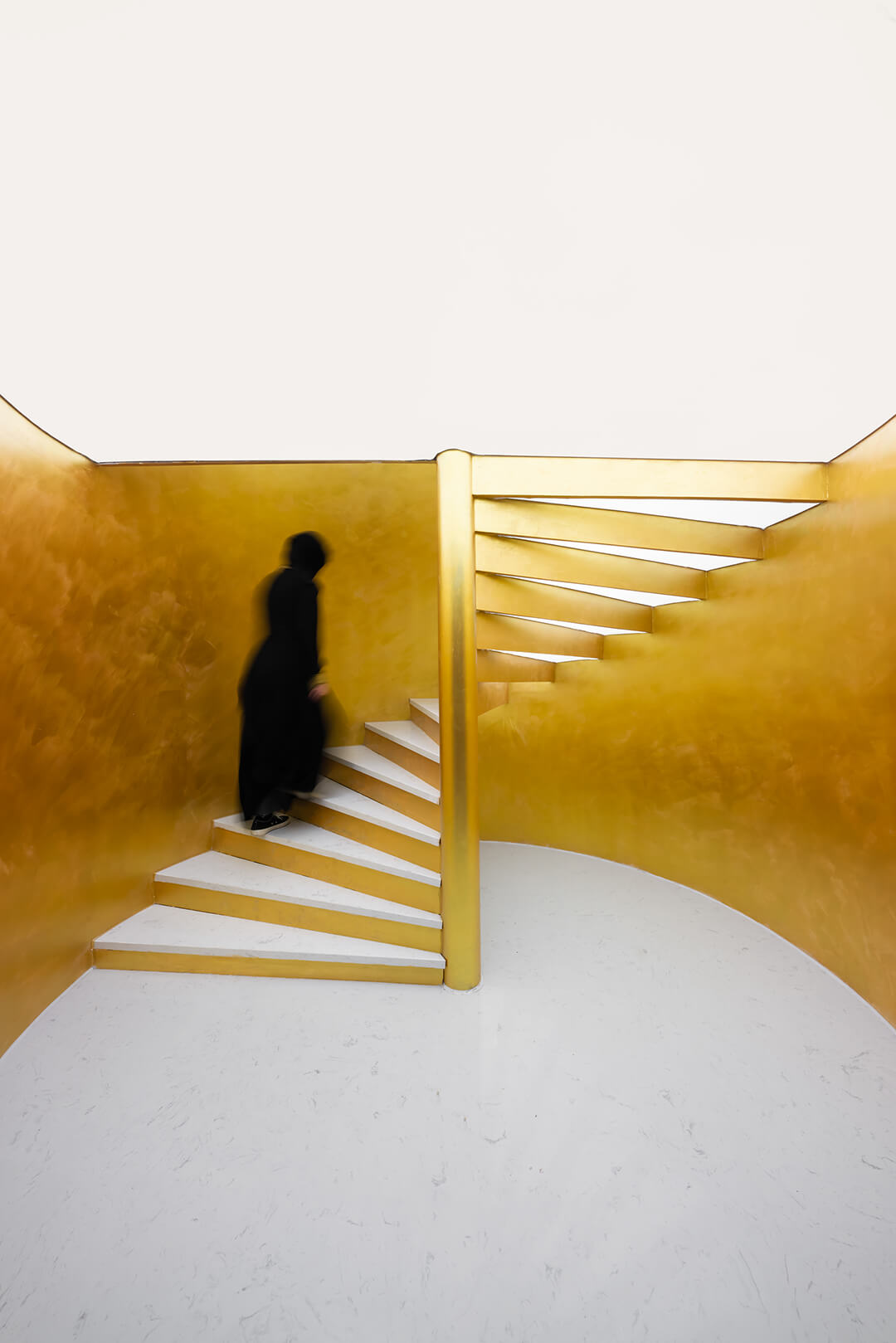 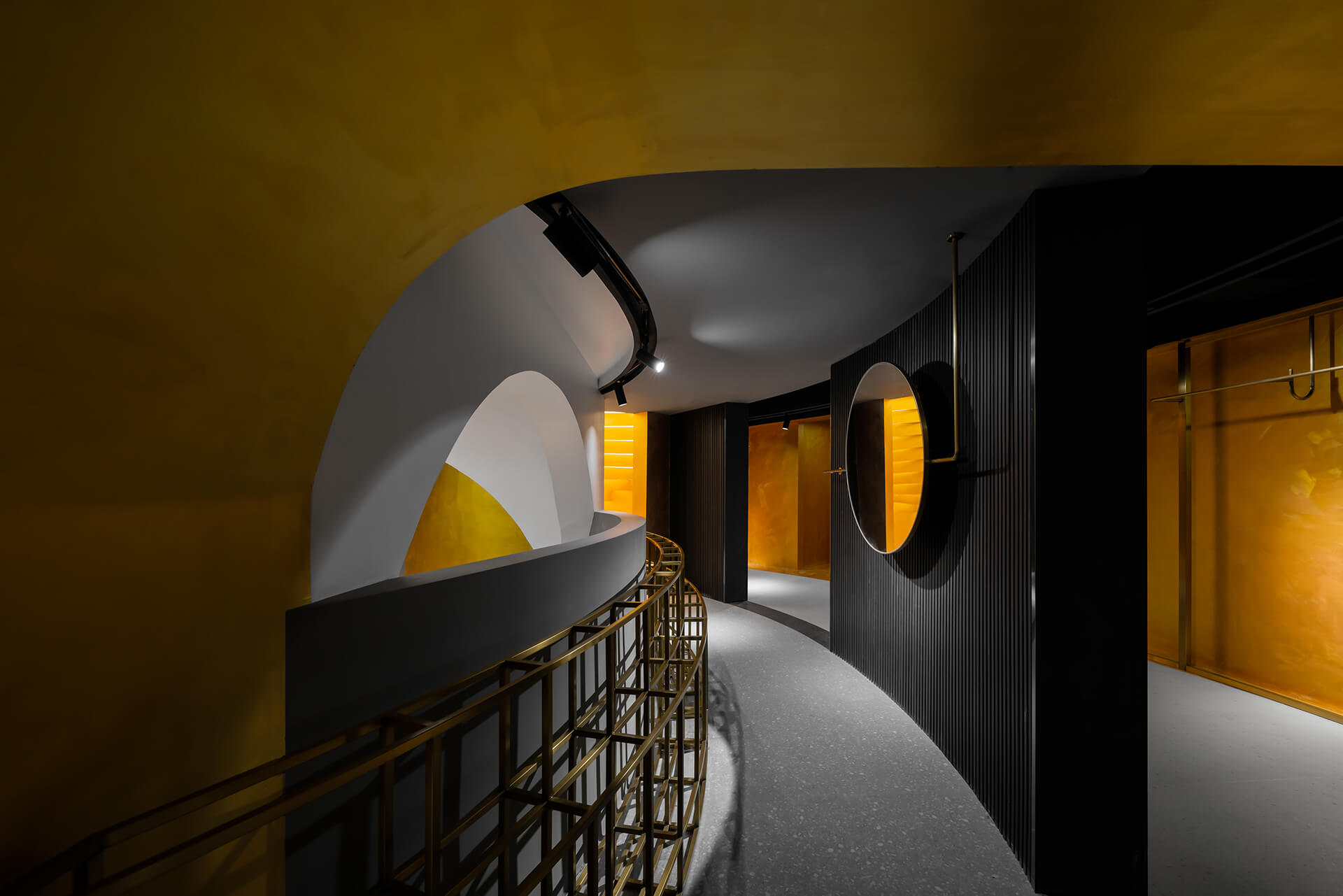 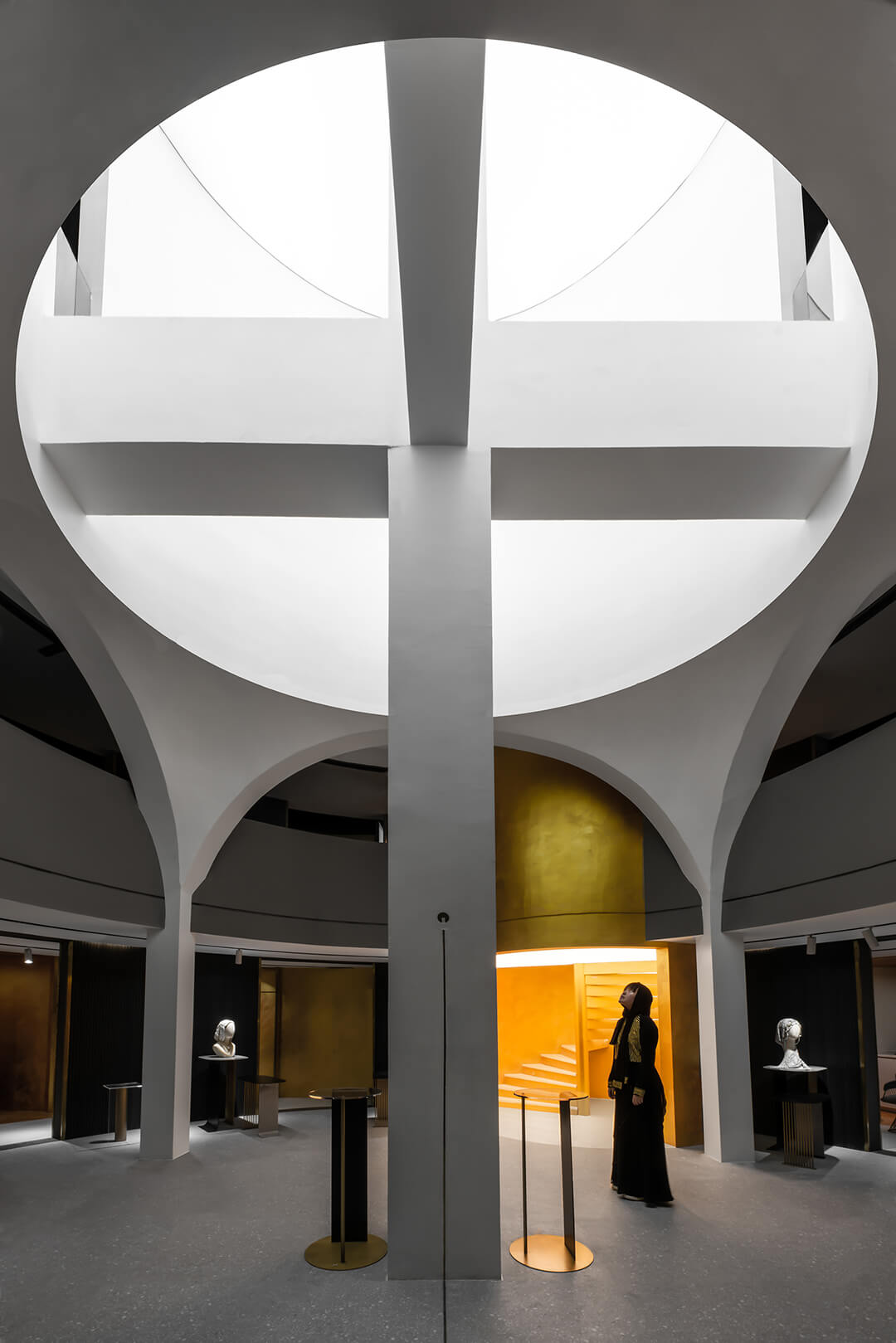 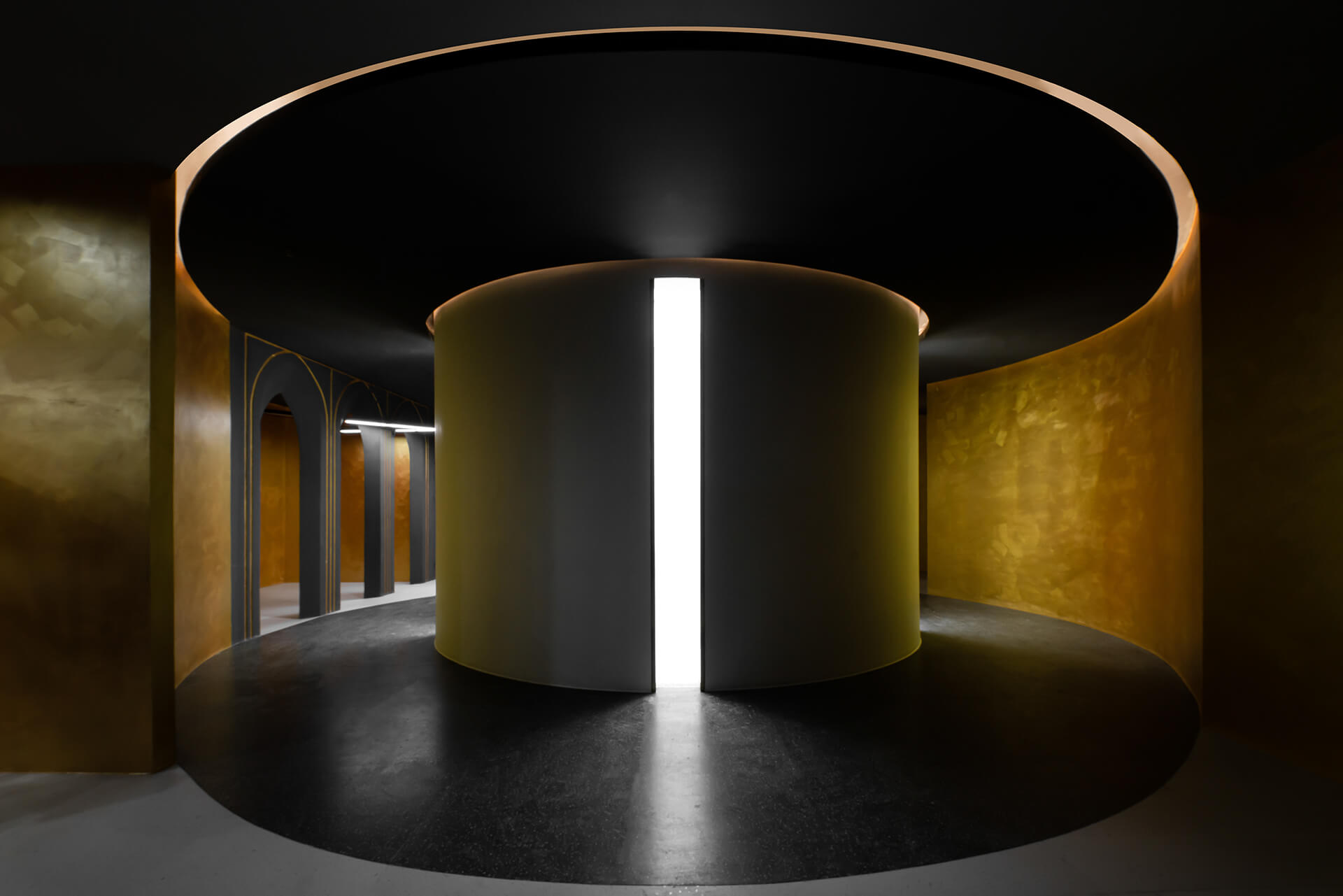 As they set out to translate the architectural language of Islamic societies in a contemporary context, PMT Partners aimed to create a poetic, ‘sublime’ interior. The space is partitioned vertically into three floors, with a two-floor atrium composed of concentric circles and ovals. The atrium contributes to efficient traffic flow between levels.

Here, a pendentive structure is inlaid, its function both architecturally supportive and symbolic – the architects hoped to evoke a sense of spatial ceremony with the addition. The dome which would traditionally be supported by such a pendentive was instead replaced with a lit cylindrical structure which casts beams of light into the space, which is further brightened by yellow-gold finishes and fixtures.

An existing crossbeam maintains the original framework of the slick-surfaced store and ‘weakens the appearance of the stereotyped dome,’ say the architects, but beneficially – ‘so that the design goes beyond a complete imitation of the classical’.