Dividing her time between Seoul and Berlin, Haegue Yang makes conceptual work using everyday materials, which she employs in abstract and subtly narrative ways. The results range from compositions featuring envelope security patterns to sculptures built around products like clothing racks. The 45-year-old artist has made sculptures and installations out of Venetian blinds since 2006.

You first used Venetian blinds in Series of Vulnerable Arrangements – Version Utrecht, your multisensory installation from 2006. How did your interest in blinds develop?

HAEGUE YANG: That installation was a mute sensorial field, composed of devices such as lights and scent emitters that were juxtaposed with a ‘voice’ from video essays in the same space, which was demarcated by Venetian blinds. The obliqueness of the blinds achieved an ambivalence of being comfortingly separated yet sufficiently connected. This discovery informed my next piece, Series of Vulnerable Arrangements – Blind Room, also from 2006. Guided by the blinds, one wandered into a field of light/shadow, wind, heat, humidity and smells, the mind strolling in associative memories. Although the contemplation of senses occurred individually, visitors were bound to one another through a shared experience of fragmentation and separation. 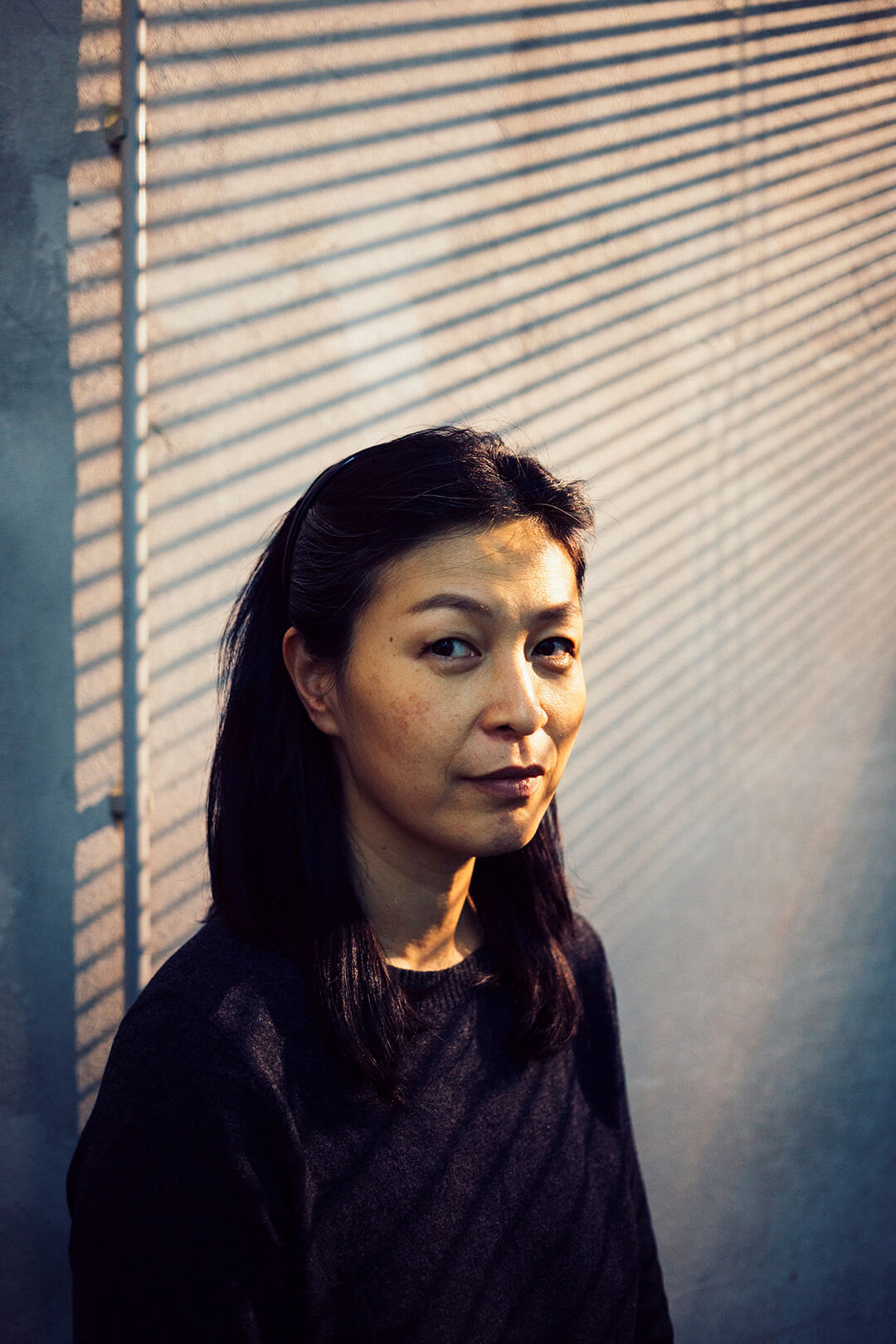 Haegue Yang doesn’t care whether viewers understand the complex meanings behind her works of art: ‘I’d rather invite the audience to enter a visual and spatial field that has a somewhat abstruse articulation than one that produces an obvious meaning.’

How has using Venetian blinds helped you to think about space and architectural volume?

My 2008 installation, Mountains of Encounter, marked the first shift from narration to abstraction. The spiral layout of vibrant red Venetian blinds sloping at different angles portrayed the mountainous landscape of Yan’an, China, where Korean underground revolutionary Kim San had an unlikely encounter with American journalist Helen Foster Snow in the 1930s, leading to her biography about him. The hypnotizing choreography of four moving lights sharply cut the blinds’ surface, while white circles and two strong floodlights in the spiral’s centre dimmed and brightened. As lights and blinds intensely confronted each other, heroic and universal qualities of this encounter penetrated across history.

Your installations seem to be inspired by figures from literature, their politics and passions. How do Venetian blinds enable you to develop an abstract narrative?

One example is Lethal Love from 2008, which lingered on the intense companionship and tragic end in the story of Petra Kelly, founding member of the German Green Party, and Gert Bastian, former German general and peace-movement hero. [In 1992, Bastian apparently shot Kelly dead in her sleep before killing himself.] The installation activated an experimental template to explore their narrative, using materials suggestive of what happened, such as gunmetal-coloured Venetian blinds, smells of wildflowers and gunpowder, and an extreme reflection of blinding light. The viewer, however, remained more or less blind to the concrete narrative, which is my goal in achieving abstraction. For me, abstraction gives value to narratives that appear within and around us without constituting its own limits. 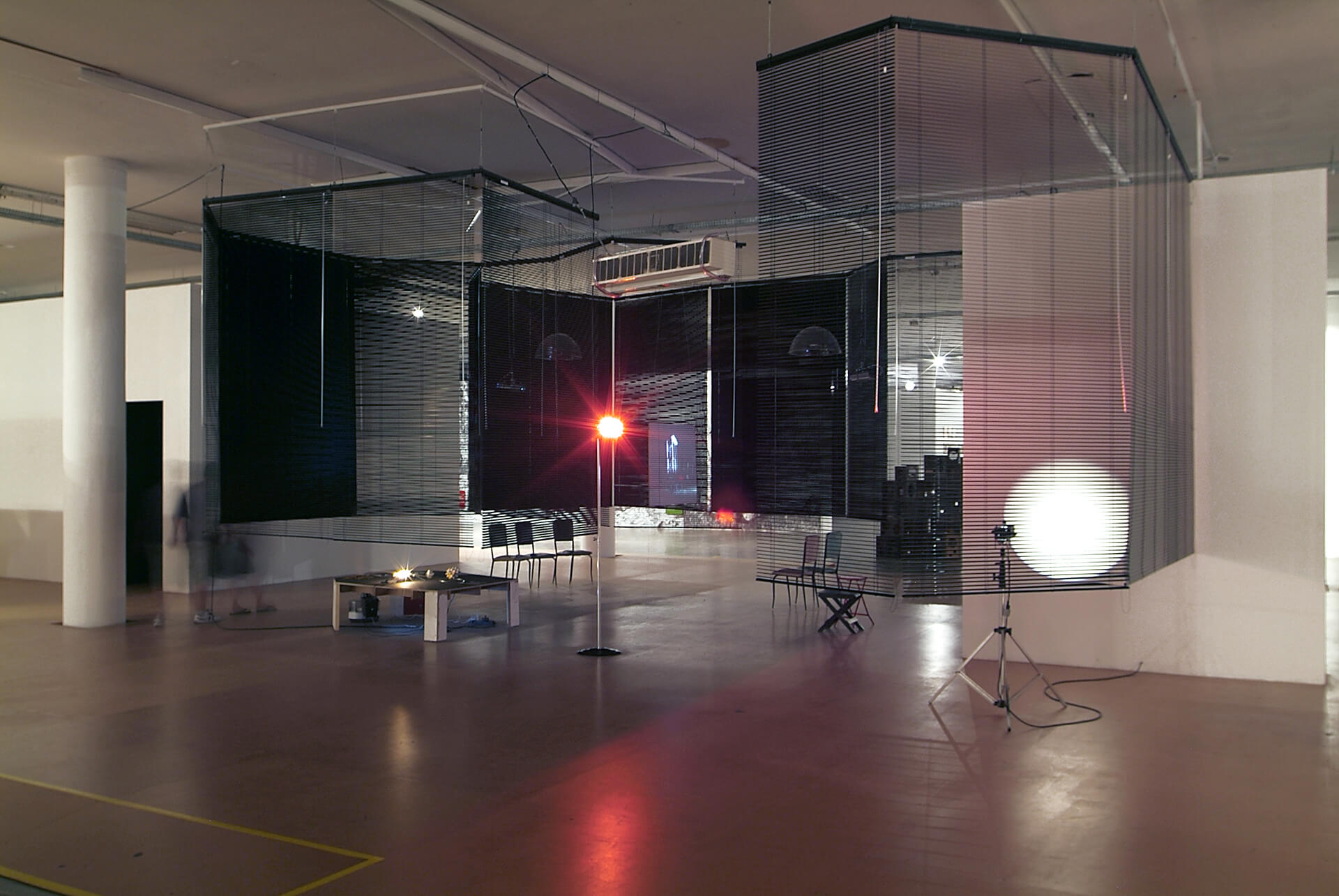 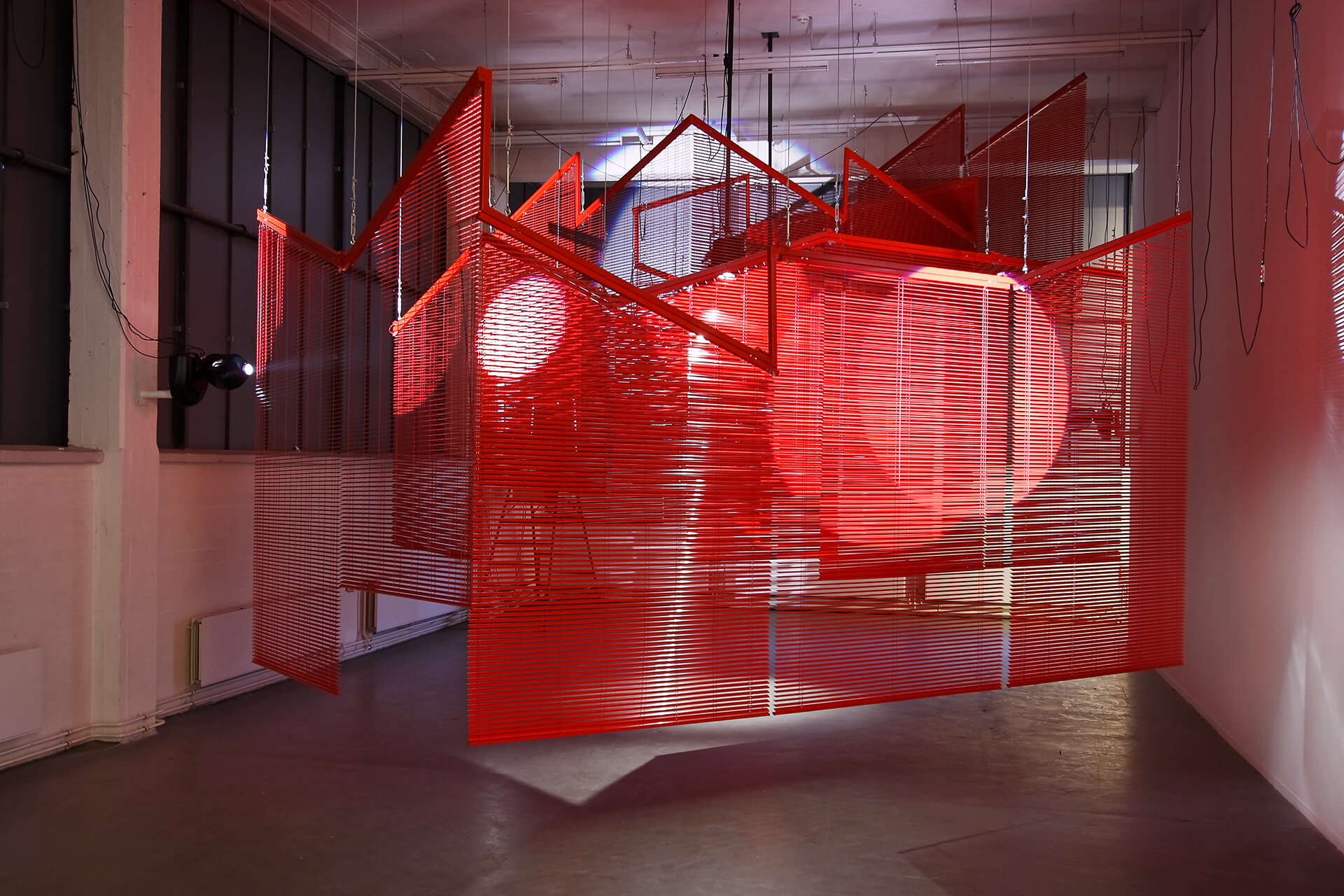 How important is it that visitors understand the meaning behind the piece?

It’s not very important – more of an option than an obligation for the viewer. Although I don’t want to give up learning about historical figures, the work and the audience should be free from my eagerness to dive into those stories. I’d rather invite the audience to enter a visual and spatial field that has a somewhat abstruse articulation than one that produces an obvious meaning. 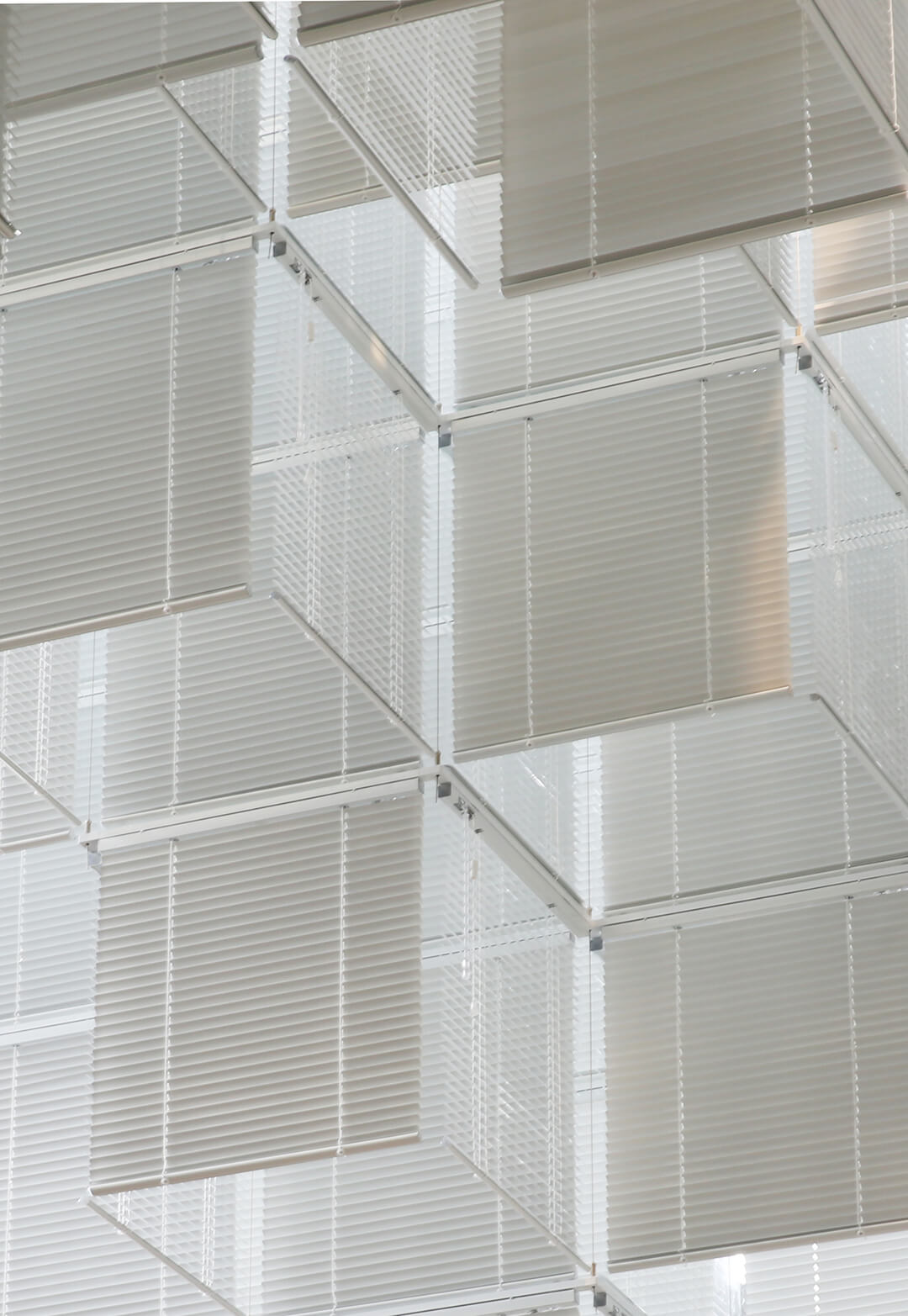 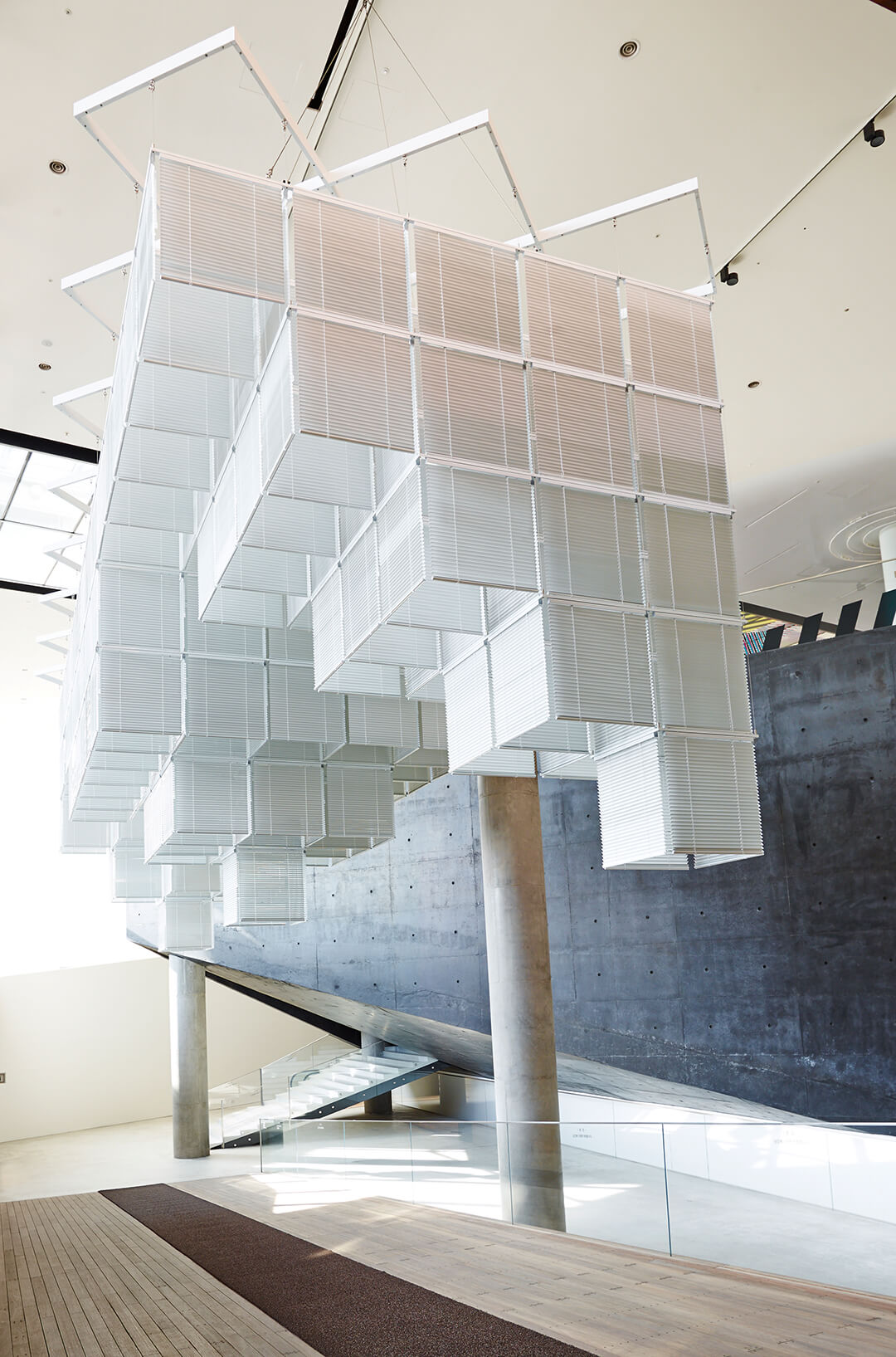 Other pieces reference 20th-century art, such as Sol LeWitt’s geometric white structures. What triggered this aspect of your work?

I felt liberated by Sol LeWitt’s approach to works such as his modular structures and by his statement: ‘Conceptual artists are mystics rather than rationalists. They leap to conclusions that logic cannot reach.’ The primary translation mechanism of my piece from 2015, Sol LeWitt Upside Down – Structure with Three Towers, Expanded 23 Times, is an expansion and inversion of LeWitt’s 1986 Structure with Three Towers. The work becomes progressively opaque as the layers of blinds accumulate, while the shallow areas maintain their transparency.

How does playing with transparency and opacity relate to Korea’s modern history?

Experiencing modern Korean history, with its long and brutal military dictatorship – a dominance of state-led economic development and the sacrifice of freedom of speech and democratic values – made me conscious of the authoritarian abuse of power. I wish not only to remember but to render official history in a subjective way, so that it doesn’t become knowledge to be learned. 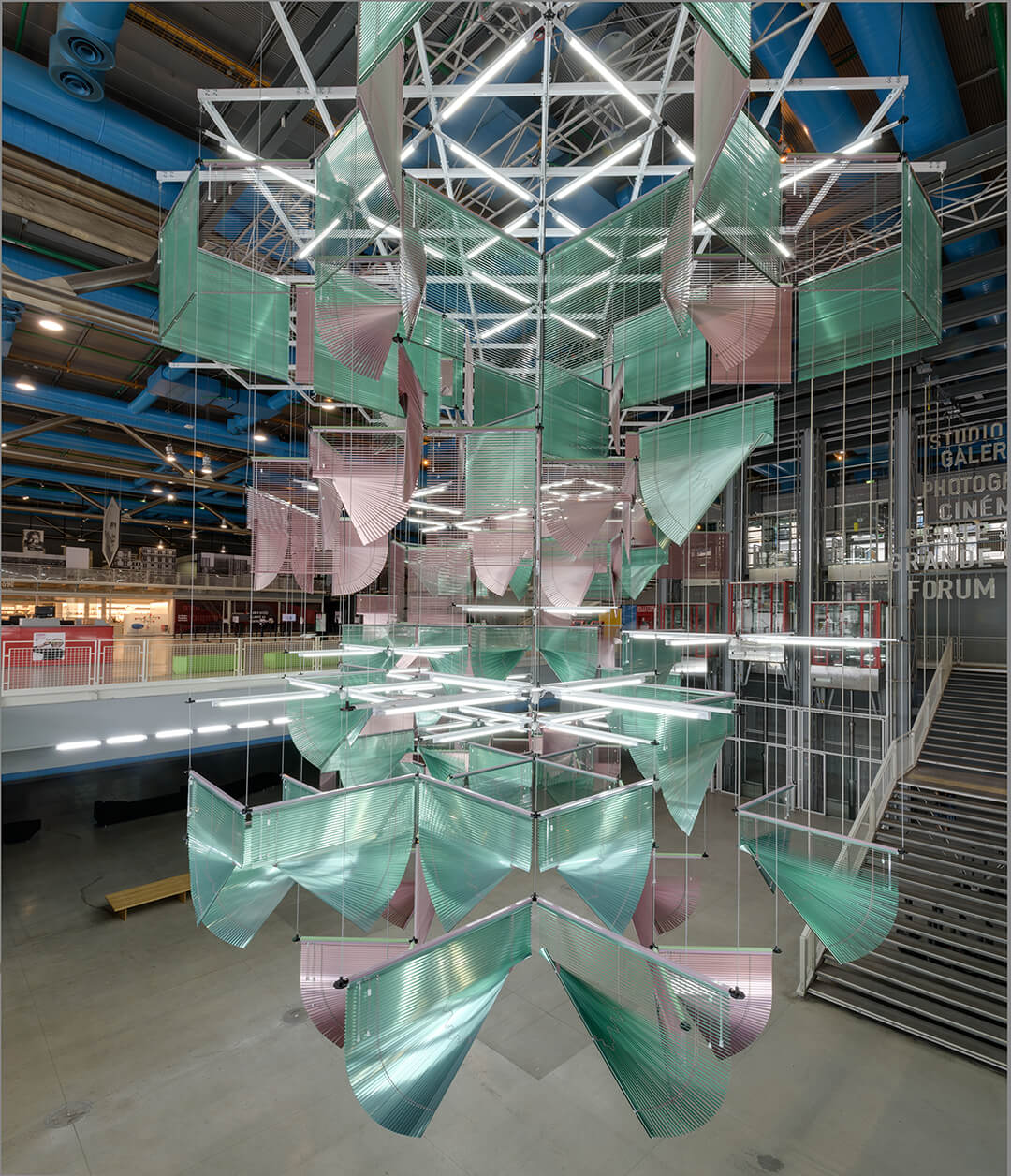 A site-specific installation extending over three floors of the Centre Pompidou in Paris, Lingering Nous (2016) enters into a dialogue with the linear architecture of the museum complex. Photos: Florian Kleinefenn, courtesy of Galerie Chantal Crousel, Paris, France

You often choose what have been called ‘indescribable, uncategorizable colours’, such as the iridescent green and pink in Lingering Nous, exhibited at the Centre Pompidou in 2016. What are your criteria for choosing colours?

Each colour in Lingering Nous relates to a specific angle defined by my own octagonal connector system and echoes the primary colour scheme of the Centre Pompidou’s building services, such as ventilation and electricity.