The Schüttelbrot is a crisp flatbread made mostly of rye flour, coriander, anise and fennel seed. In South Tyrol, its birthplace, it historically helped locals survive the cruel Alpine winters: once made, a batch of shaken bread could last up to three months in perfect shape, providing snowed-in dwellers with hearty sustenance.

And that recipe, in part, explains why today the Italian spot has one of the most innovative hotel industries in Europe — yes, it indeed does. We visited several valleys in the autonomous province to speak with hoteliers, architects and members of the tourism board, and thus hear from them how local cultural traditions have influenced a recent wave of architecturally impressive renovations in the area. Here are some of the main links.

[+] THE SCHÜTTELBROT = AN EXPECTATION OF QUALITY CRAFTSMANSHIP

So, the bread. The Schüttelbrot recipe became popular among locals because snow-ins were a common thing in the Dolomite winter, leaving villagers socially disconnected for weeks and even months a time — legend has it many homes had to wait until the springtime to bury a family member who had died during the winter, as the weather would basically trap the corpse inside the house. Therefore, the second most important key to survival was a built-to-last fare that could be combined with also-everlasting slices of speck. The first most important key to survival, though? Homes that were also built to last.

South Tyrolean carpenters, whose Germanic heritage influenced their superb mastery of wood, operated on a code of honour. Due to the small size of South Tyrolean villages, locals generally knew the men who built their houses on a personal basis; if any harm came to them during the isolated winters due to an error in construction, social and professional shame would fall upon the builders. The threat of harm and isolation for both sides also meant that the craftsmen used the most resistant materials and timeless techniques, to make sure they only had to build once.

Cue our current era: ‘We are still ruled by mutual trust,’ explained award-winning local architect Armin Pedevilla, co-founder of Pedevilla Architects along with his brother Alex. But now, building once extends not just to quality, but also to a sense of sustainable aesthetic timelessness. ‘That’s why our philosophy is always the same: we build with local materials, with local craftsmen, thinking of the character of the people who live here. It’s not an intellectual matter, but instead an emotional one: we want to give our projects the opportunity to age with dignity.’

For a sampler, look no further than their superb Bühelwirt hotel, or one of their latest projects, the Decantei tavern in Bressanone. The thirteenth-century building, which was once the residence of the nearby cathedral’s dean, has been updated with brass and local larch wood in deceptively understated applications that reference the circle as a perfect geometric element and the encapsulation of time. Aging with dignity, indeed. 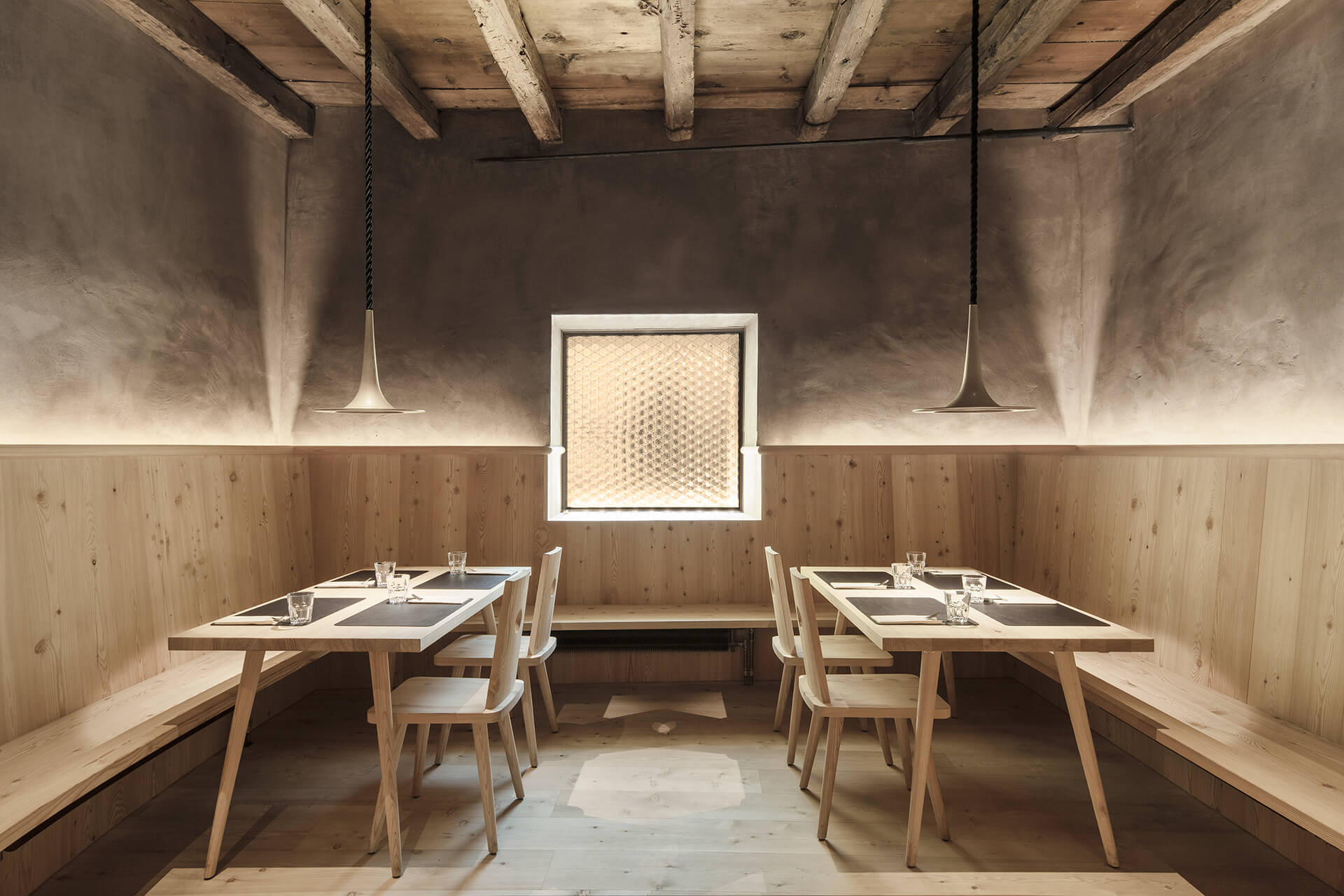 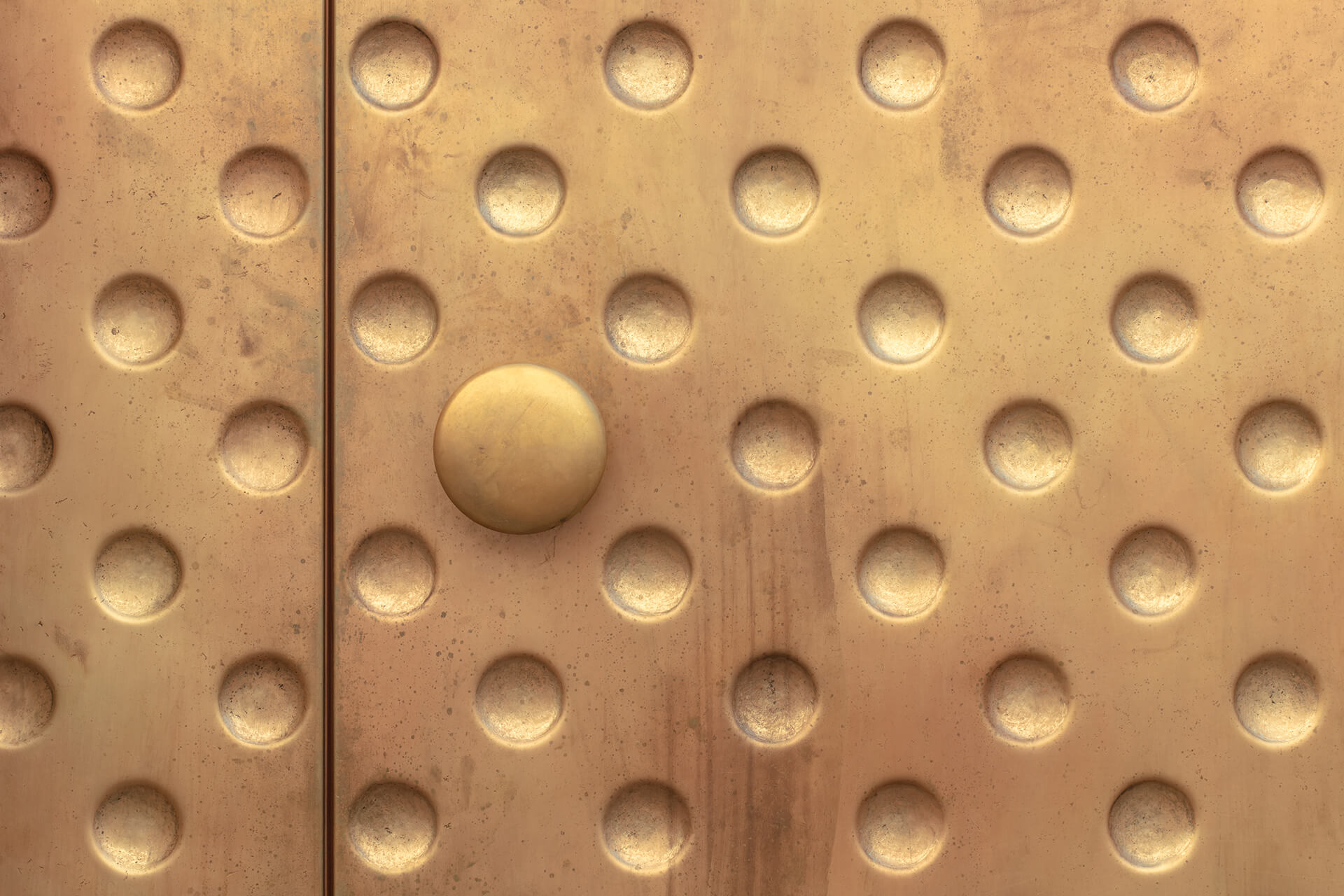 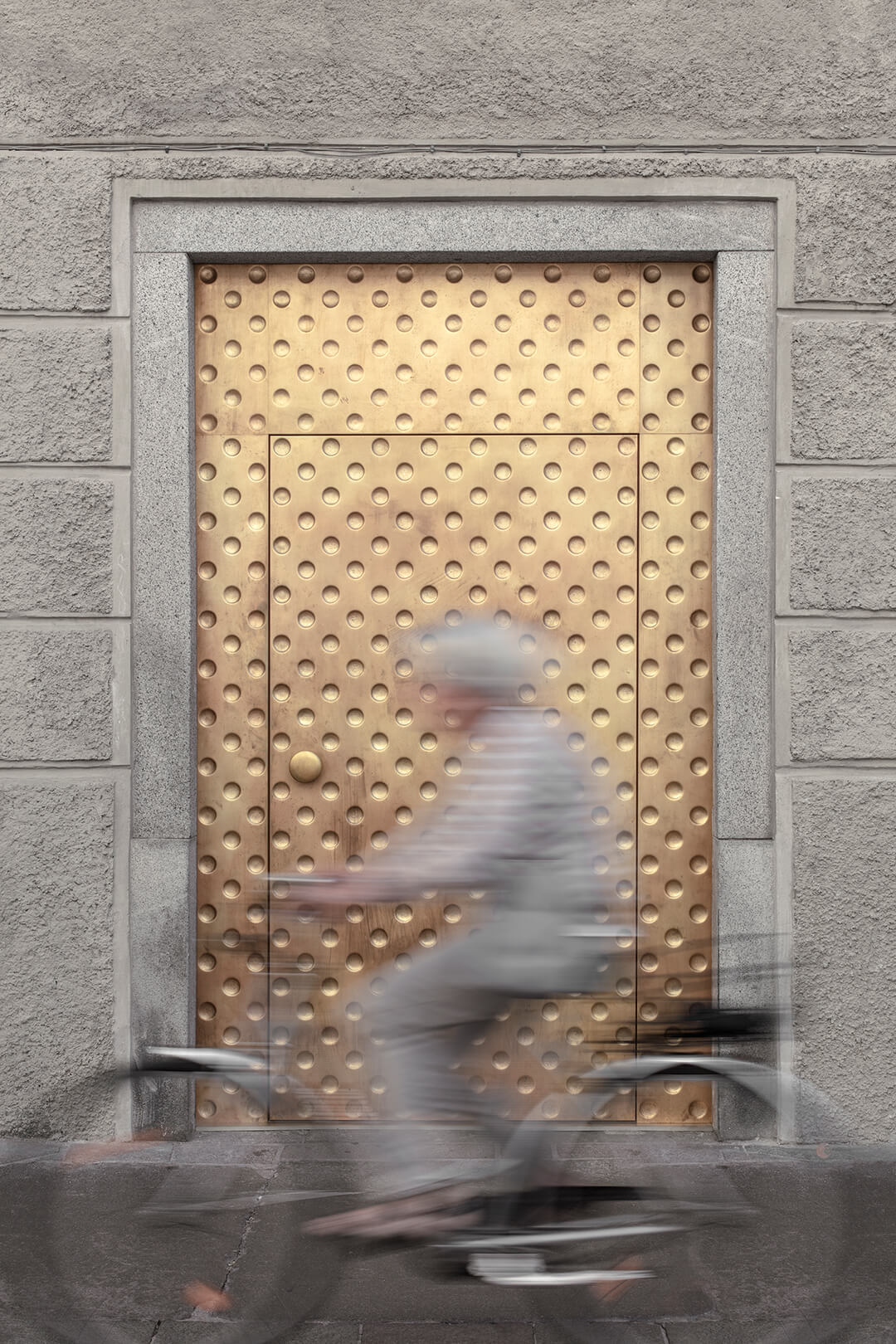 To control the sustained quantity and quality of the snow in the Obereggen ski resort, in the 1980s two of its operation managers decided to tweak their farming equipment into snow cannons. These prototypes later evolved into TechnoAlpin, one of the world’s most revered purveyors of snowmaking systems.

Today, Obereggen operation managers think of other types of innovations in the name of quality: namely, hospitality ones. Obereggen AG is the company in charge of operating the network of 45 lifts that leads visitors to 10 connected villages with slopes of differing levels of difficulty. The network’s top chairlift station recently became the home of the Oberholz Mountain Hut, an impressive feat of glass, wood and stone that overlooks the privileged location. ‘Years ago, people wanted to ski as much as possible every day on a daily ticket,’ said Obereggen’s Alexander Pescollderungg. ‘But now, the lifts have gotten so efficient that people can pace themselves and devote time to lounging, de-stressing and enjoying cuisine made with local, seasonal ingredients.’ 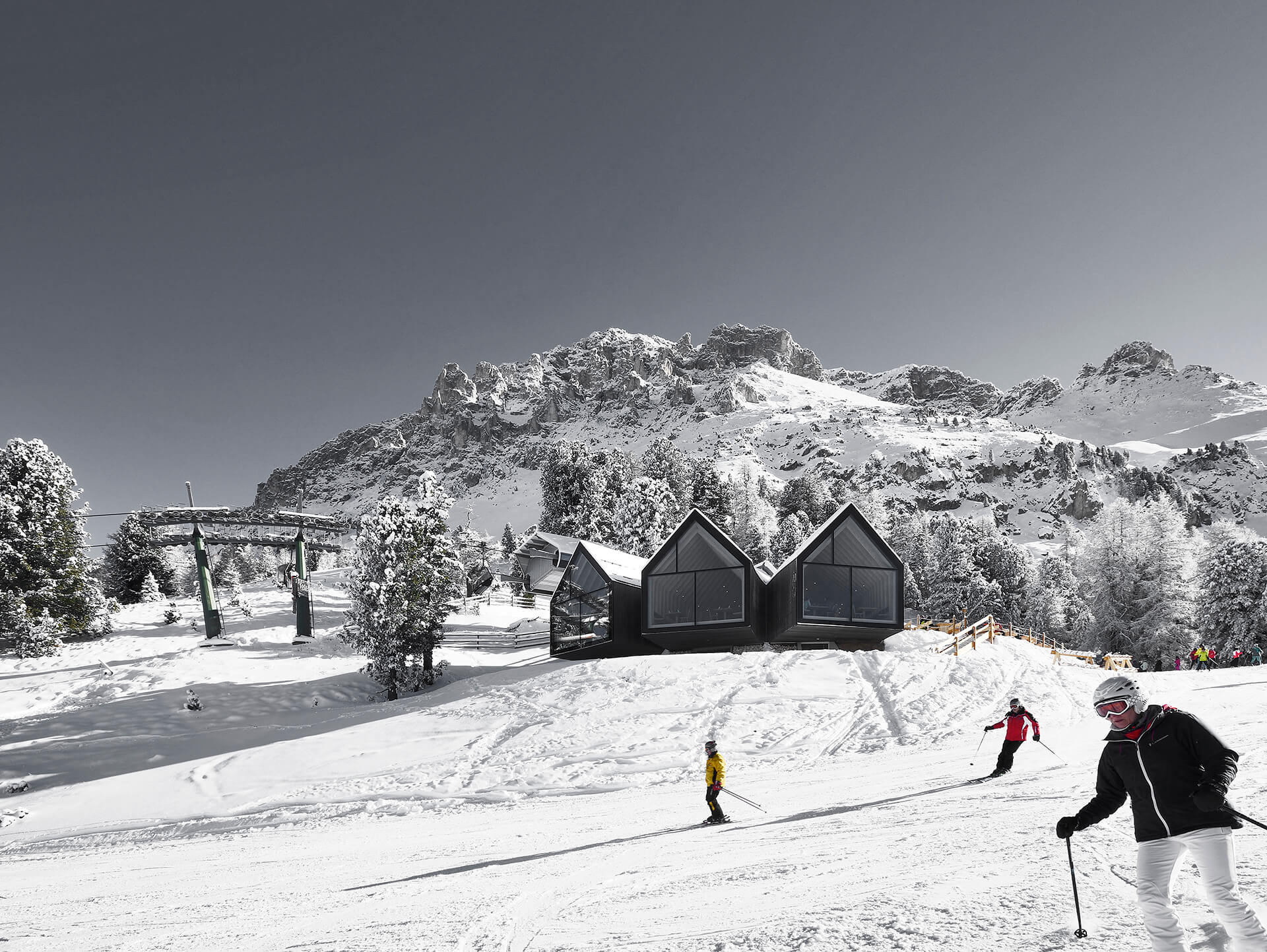 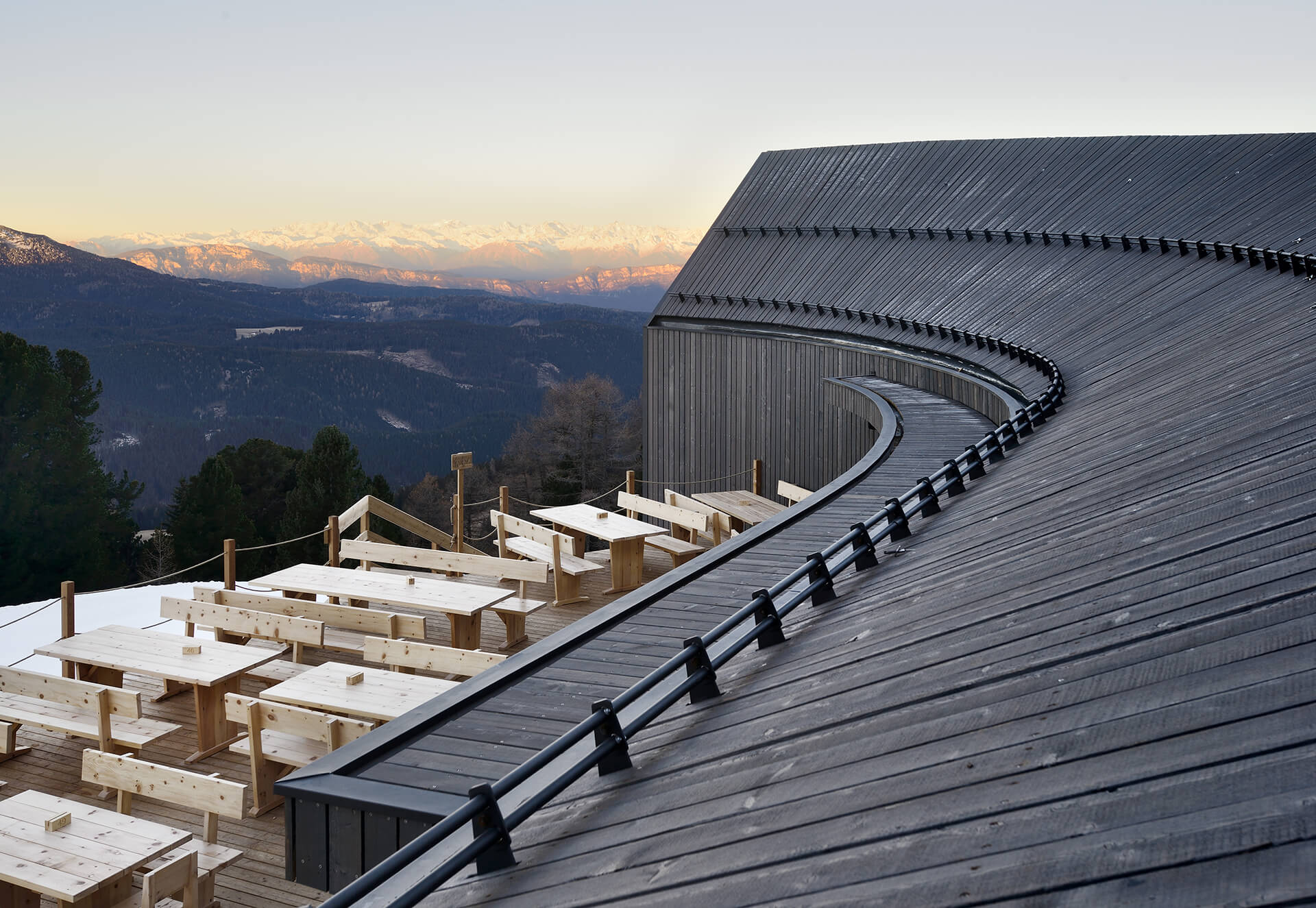 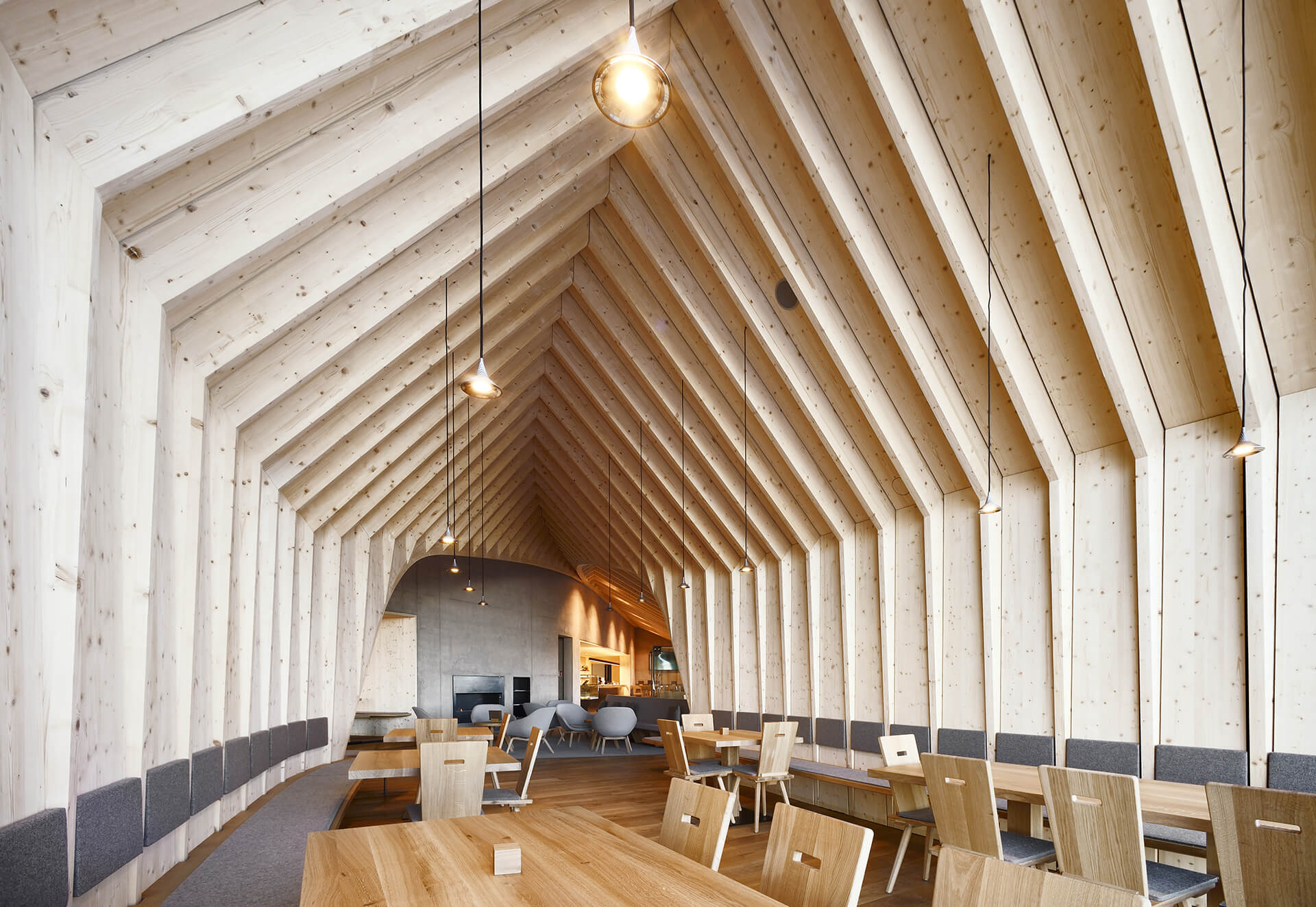 That’s where the mountain hut restaurant came in: Obereggen wanted to use architecture to broadcast the message of having a high-quality destination. And rightly so: designed by Bolzano-born architect Peter Pichler, the exterior twisted-hut-combo gives way to a startlingly complex interior structure, with wood in a Jonah-inside-the-whale setup. Pichler, who is also behind the impressive revamp of Castelrotto’s Schgaguler Hotel, sees it as a manifestation of the region’s integral understanding of the power and limitations of architecture. ‘We’ve understood that good architecture will help us attract quality-tourism, but we’ve also understood that good architecture is not enough to maintain overall quality,’ he explained. ‘So we are focused on a holistic approach: the biggest challenge is about really respecting the tradition of the place.’

But the Obereggen managers are not the only ones pimping the pit stops. The Patient Zero for the region’s current architectural showboating is over on the Kronplatz mountain, at the top station of the gondola lifts: Zaha Hadid’s alien-like Messner Mountain Museum. Next to it is now the Lumen Museum of Mountain Photography, a surprisingly thorough and creatively challenging tribute to topographical snappers designed by EM2 Architekten. Some of its unexpected treats are the mini-exhibitions that question the political privilege of photographers, a fun interactive room by way of Red Bull and, in a meta nod to the quality of being camera-ready, a gigantic shutter that opens and closes to reveal the surrounding Alpine landscape. Travellers have become more demanding in their leisure wish lists, and thus winter sports and wellness alone don’t hold the attention span of high-end holidaymakers, so many ski areas are adding cultural activities to their offerings. This two-in-one museum mini-park is sure to please architecture, design and photography fans.

Also pleased? Those in search of sustainable and seasonal regional cuisine: the Lumen museum also includes the Martino Gamper-designed AlpiNN, helmed by Michelin-starred chef Norbert Niederkofler. ‘We conceived the space with the goal of creating a more authentic and honest idea of Alpine architecture and design, with locally sourced materials that form an interior landscape to view the surrounding mountains,’ explained Gamper. ‘Now, as a result, I hear from the restaurant that customers enjoy the food, the interior and the view so much that they don’t want to go home.’ 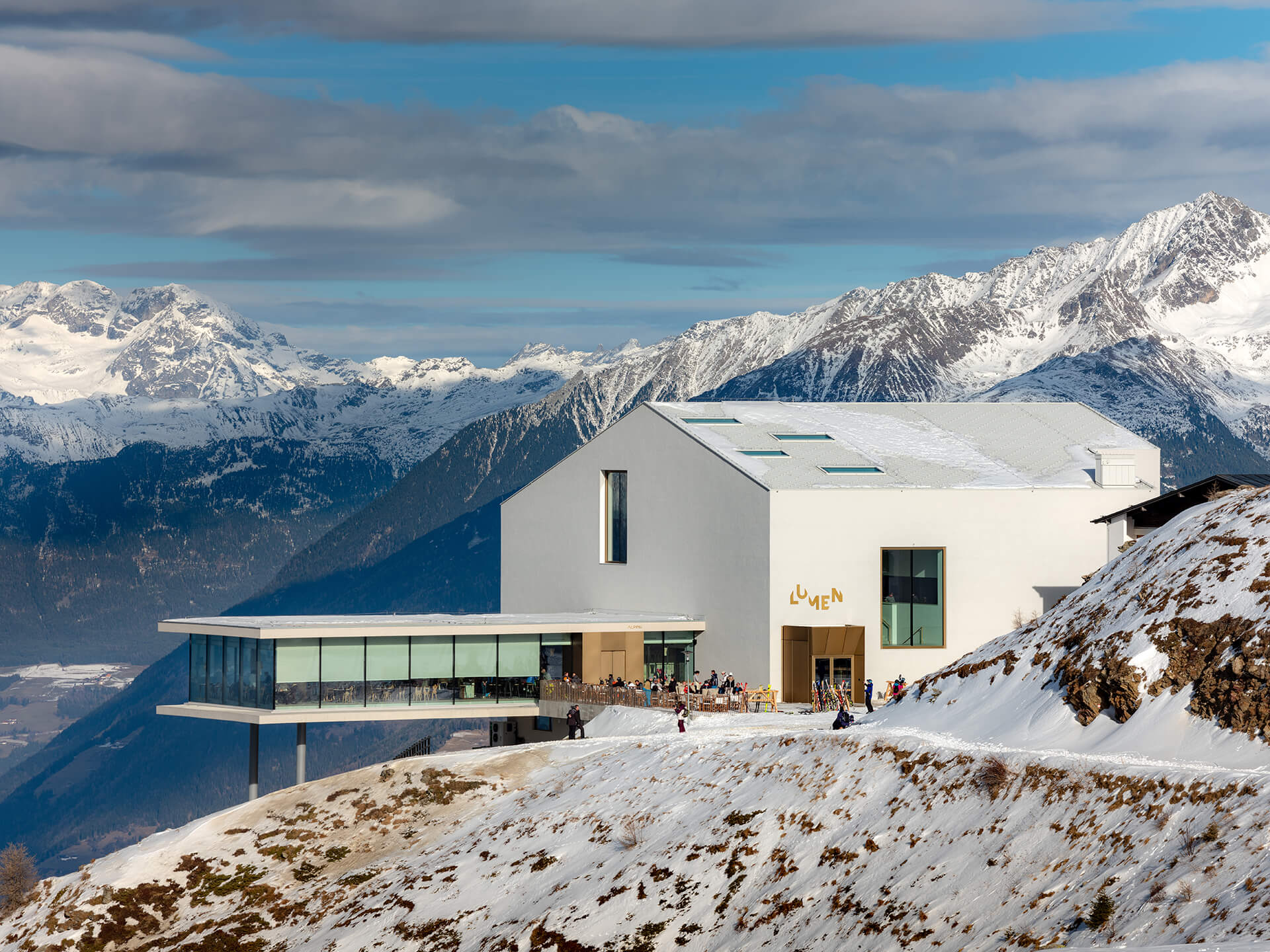 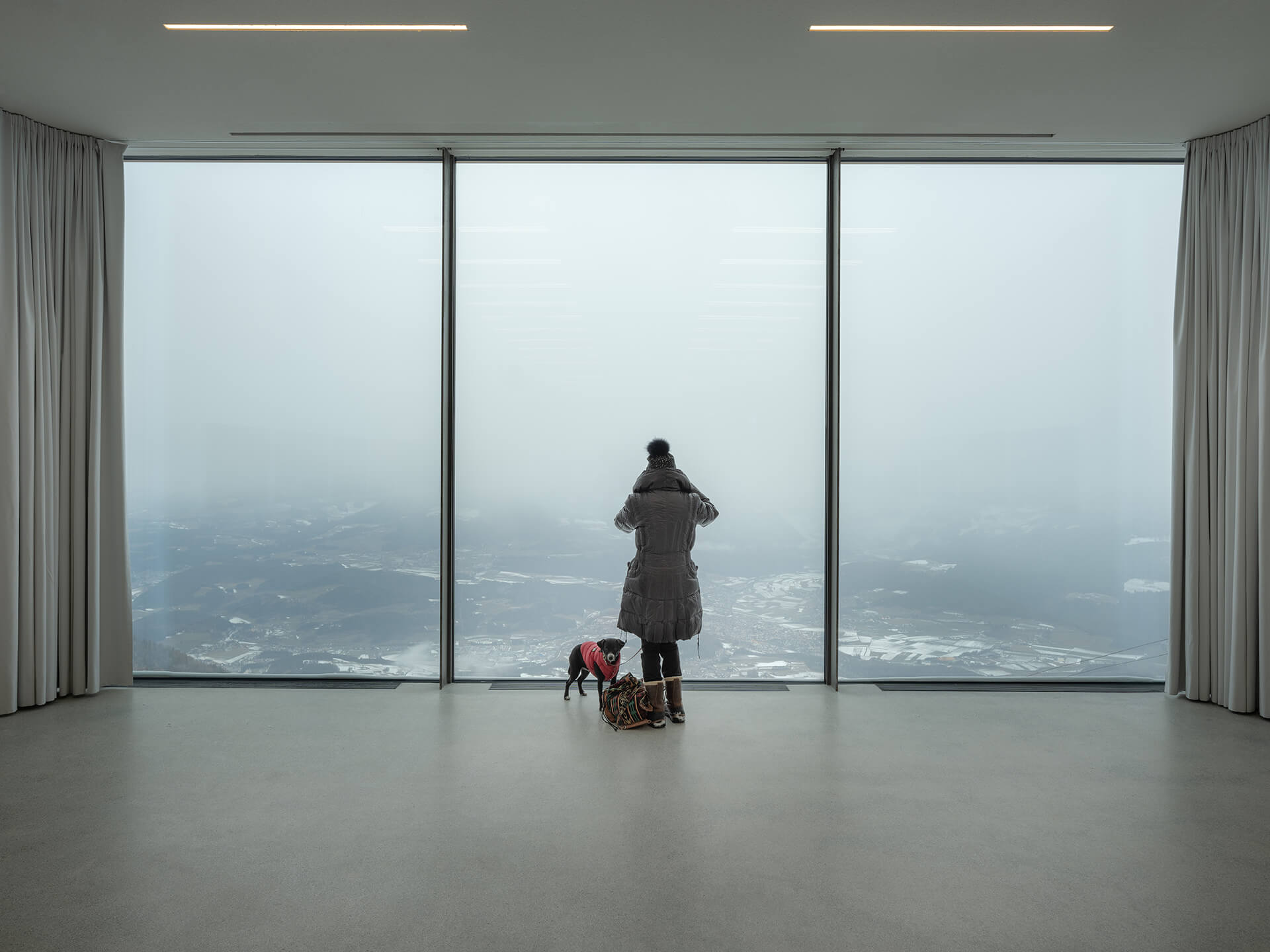 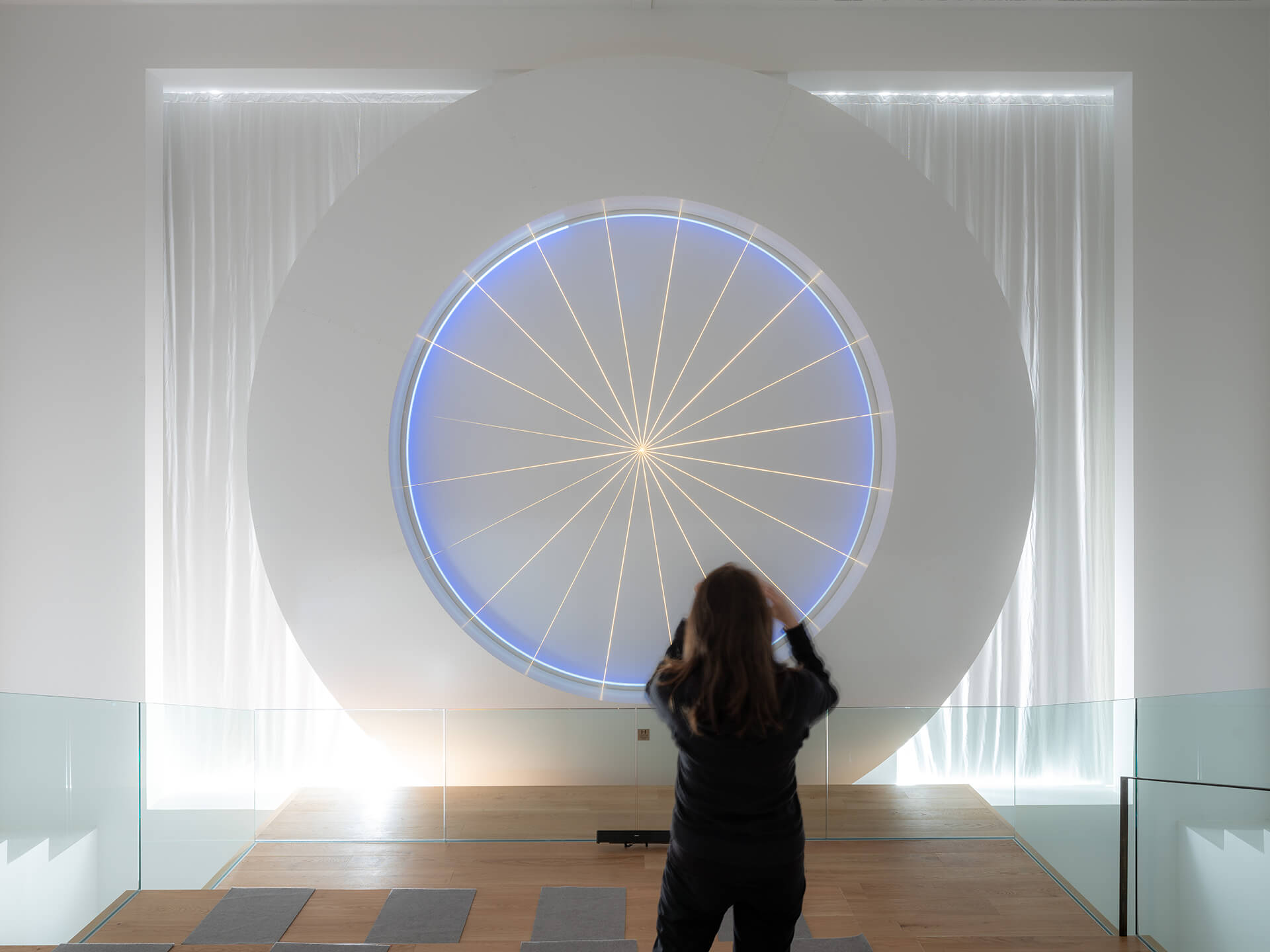 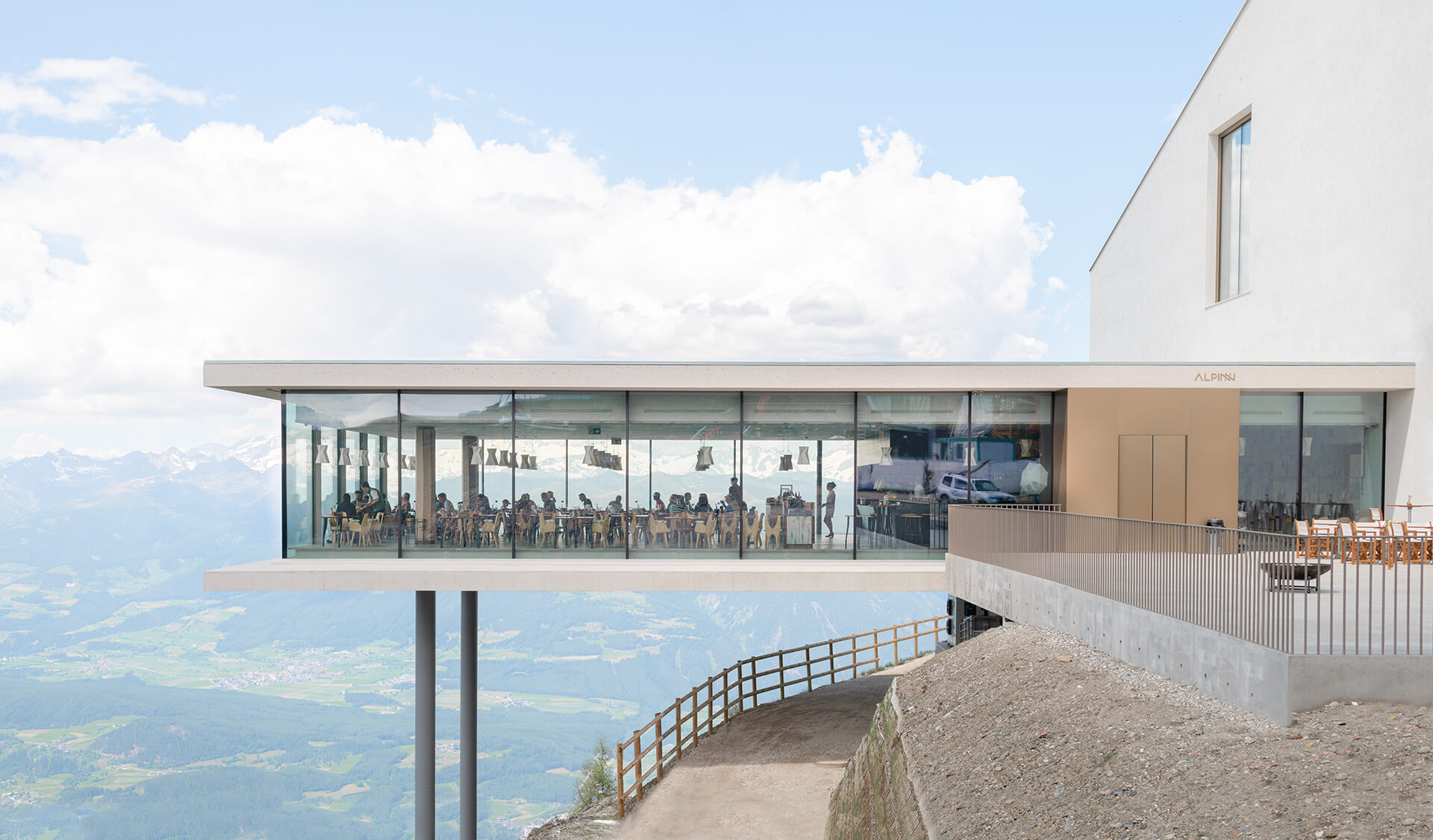 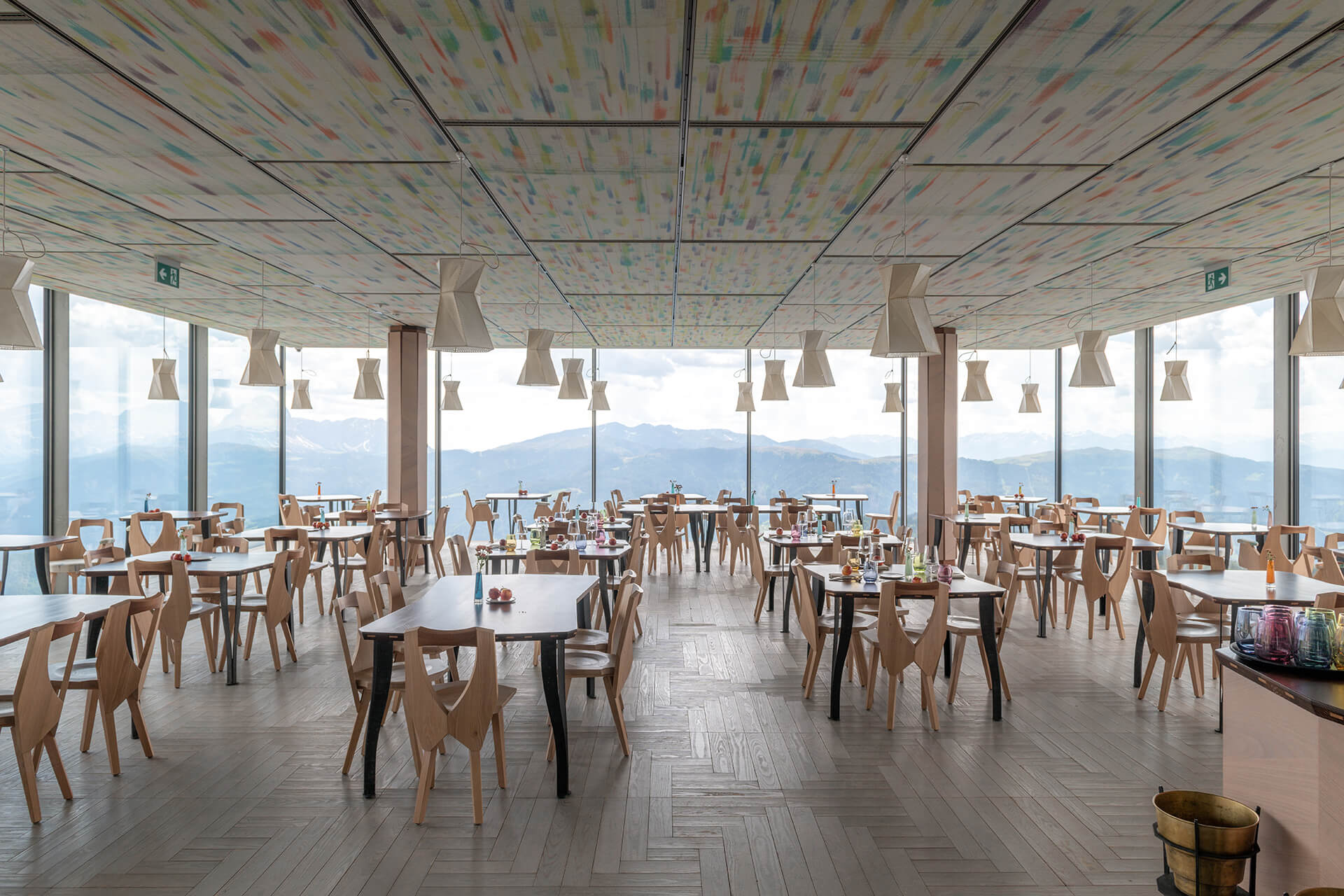 [+] SELLING SHARES FOR A RESORT = STILL TRUSTING THE YOUNGSTERS

In the summer of 1970, a group of 11 men in their 20s envisioned a ski resort on the skirt of the Latemar mountain. Unable to self-fund this dream, the youngsters went door to door on the Val d’Ega, selling shares for this farfetched venture. We all know how that turned out.

Later, the multi-village ski pass that, with its ease of use, has turned many families into repeat visitors to South Tyrol, was created by a university student — it was, in fact, born as a class project.

This is a region, in other words, that puts its business faith in its youth — visionary managers such as Peter Schgaguler barely reach their third decade. But what’s more: it puts special faith in its young women. From the conceptual revolution at the Silena to the dual timelessness of the Bühelwirt, many of the groundbreaking hotel projects in the area are currently led or were started by female entrepreneurs under 30 – another example is the operation at the Noa*-renovated Valentinerhof, run by the young Mulser sisters.

Otherwise put: the rate of generational renewal in the region, which makes it so competitive, is explained by the strong belief in a full passing of the baton at a young age.

[+] 6-AM GOVERNMENT SESSIONS = THE BUILDING COMMISSION

During Luis Durnwalder’s long and popular tenure as the region’s president, everyone knew what happened at his office in Bolzano at six in the morning: for two hours before his official schedule began, his doors were open to ordinary citizens with complaints, suggestions or requests. People would start queuing up at four: South Tyroleans civilians are keen to see themselves as an extension of the government.

That explains the existence of bodies such as the local building commission, comprised of 11 practicing architects, engineers and parish members who determine the fate of South Tyrol’s architectural landscape. ‘And that’s why the region has become known for a certain type of architecture, where we try to bring the nature inside the rooms,’ explained Wolfgang Töchterle, head of marketing at the IDM Südtirol-Alto Adige. ‘So the Baukomission is part of the community, and the community is very sensitive: this type of architecture is in our nature.’

This piece is part of our special South Tyrol report. You can read our collection of case studies here.