A barren baobab tree standing in a dusty pasture. A wall clad in pictographic tiles from the Spanish town of Santa María. A crumbling Venetian mantle piece stapled together in iron. These are some of the shots gracing the Instagram feed of architect Tomas Dirrix – above, his bio aptly reads 'The world must be romanticized'. He describes his practice as one being concerned with 'the cultural and material notions of building' (see: Venetian mantelpieces) - perhaps code for manipulating natural and synthetic materials to compose broader social narratives. Based in Rotterdam, Dirrix has been running his eponymous atelier since 2017, when he won the Meesterproef competition for emerging Belgian and Dutch architects.

Since then he has been hard at work building his architectural and academic portfolios. Last autumn, he collaborated with Sereh Mandias, leading a graduate-level studio at his alma mater TU Delft. Students were invited to compile an architectural compendium of the Boijmans van Beuningen Museum in Rotterdam. Just a few months prior, the budding scenographer had completed a multisensory space for the Van Abbemuseum in Eindhoven - within, curved walls powdered in chalk encouraged visitors to revisit their preconceived notions of wayfinding, movement and touch in museum spaces.

Thus it should have come as no surprise when founders Clélie Debehault and Liv Vaisberg of the Collectible design fair invited Dirrix to design this year's entrance scenography. Based in Brussels' historic Vanderbrought Building, the annual fair's third rendition featured a porous installation made of stacked brick that morphed from screen to desk and back again. 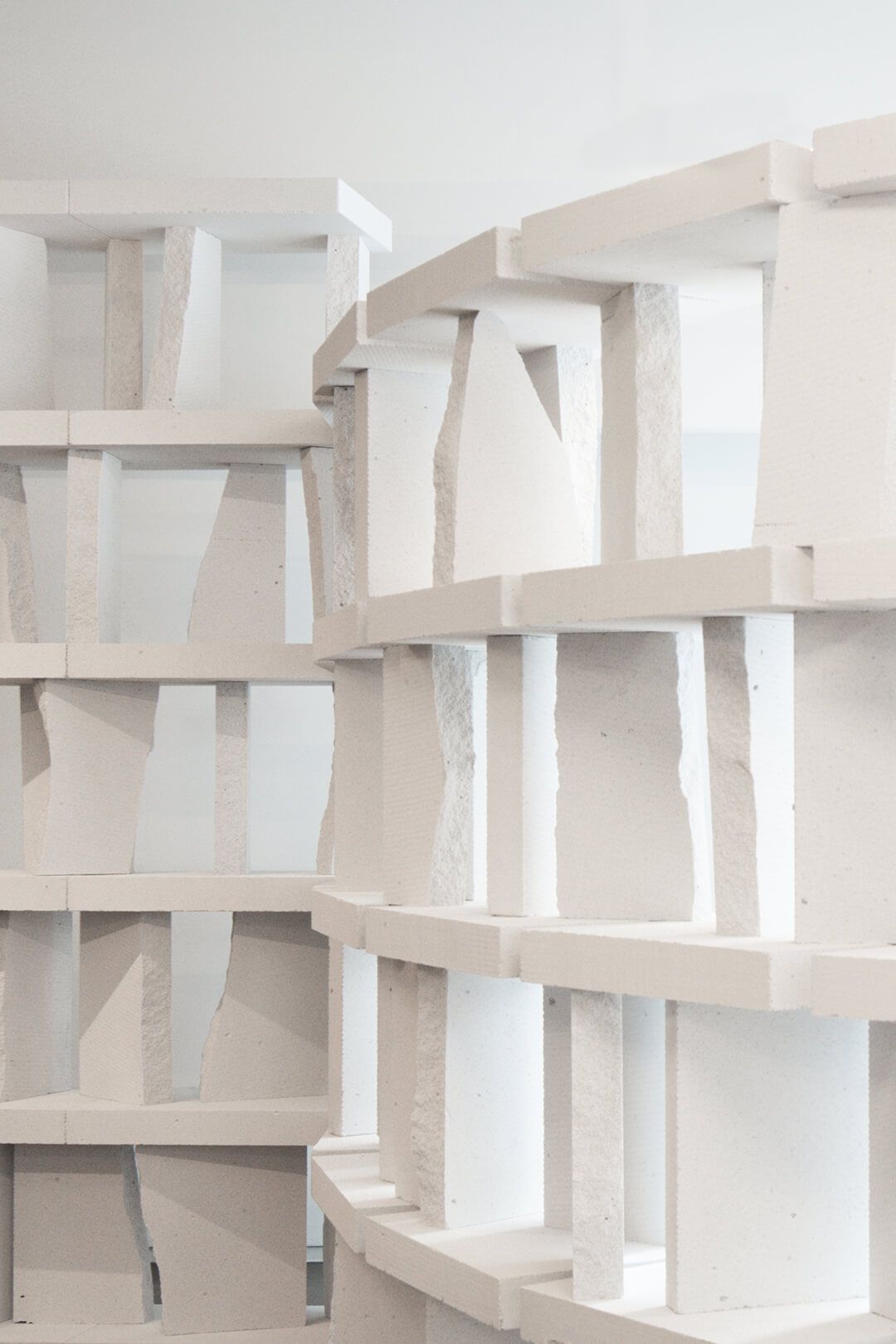 How do you approach a scenography project?

TOMAS DIRRIX: For Unfair Amsterdam I designed scenography which was much more of a backdrop to the artwork exhibited, while here at Collectible the scenography is very much a space of its own. It allowed me to be a bit more expressive.

As an architect I always like to take into account the space that I'm working within. I think the Vanderbrought is a fantastic building – it's rather rational and pragmatic in design. I thought it would be interesting – especially for the entrance - to play with its austerity and create a space that is more wondrous and a little playful; a sort of supplant to the total experience of visiting the building.

So you conceived the installation to be an extension of the building?

Yes – I wanted to create a space that served as a transition from the outside to the inside; one to really set the tone and create a moment of surprise or pause, helping visitors to understand that they were moving from the outer to inner world.

Are you ever concerned about scenography overpowering the principal space itself?

I think scenography is a very delicate job, absolutely. Though of course, the same can be said for all of design: What is it that you are designing, for whom and what is the purpose? In that sense, maybe scenography is not the right word for the installation we produced for this building. On the one hand, yes, the scenography guides the visitor, but on the other hand it creates an atmosphere of its own, becoming an architecture within an architecture. 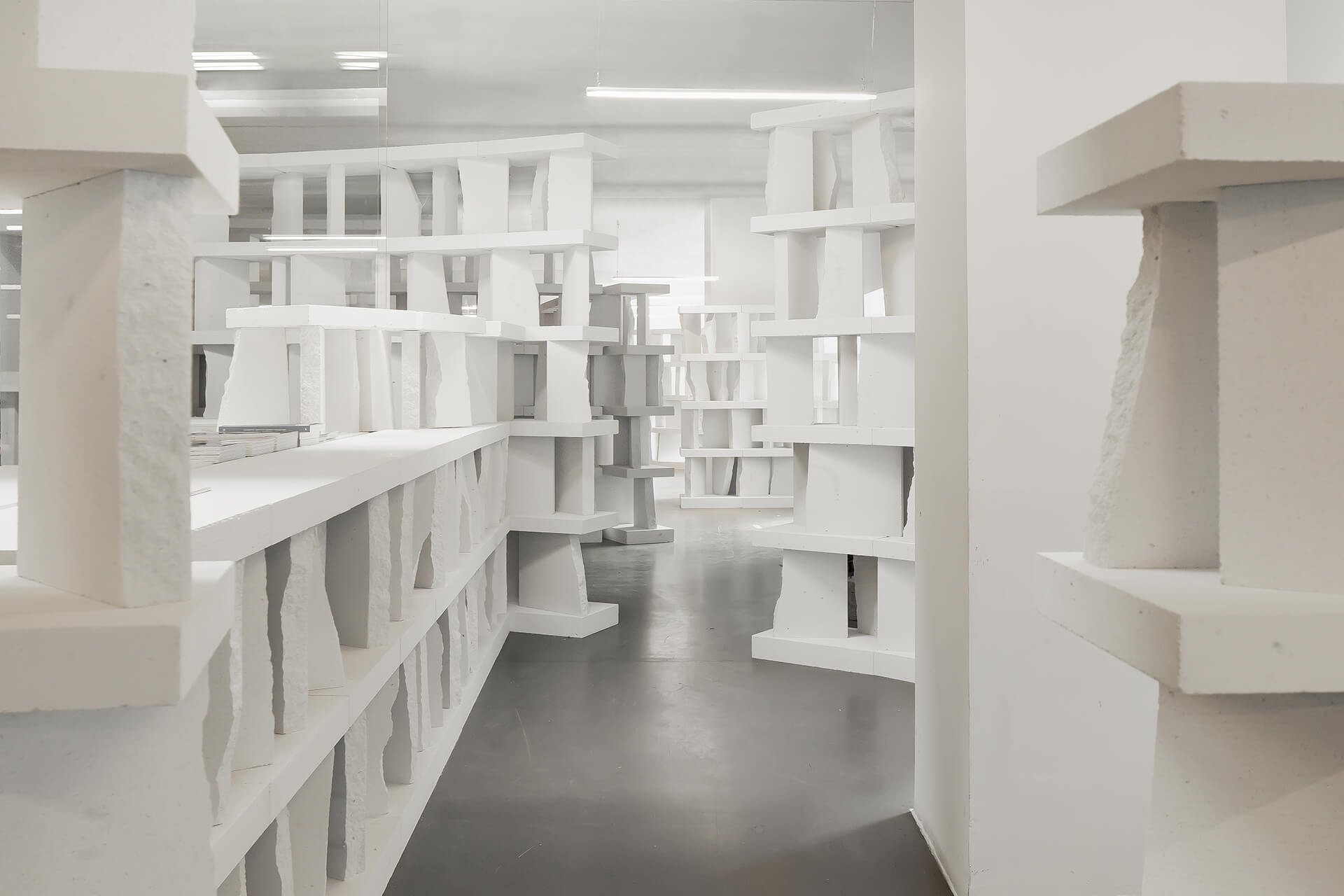 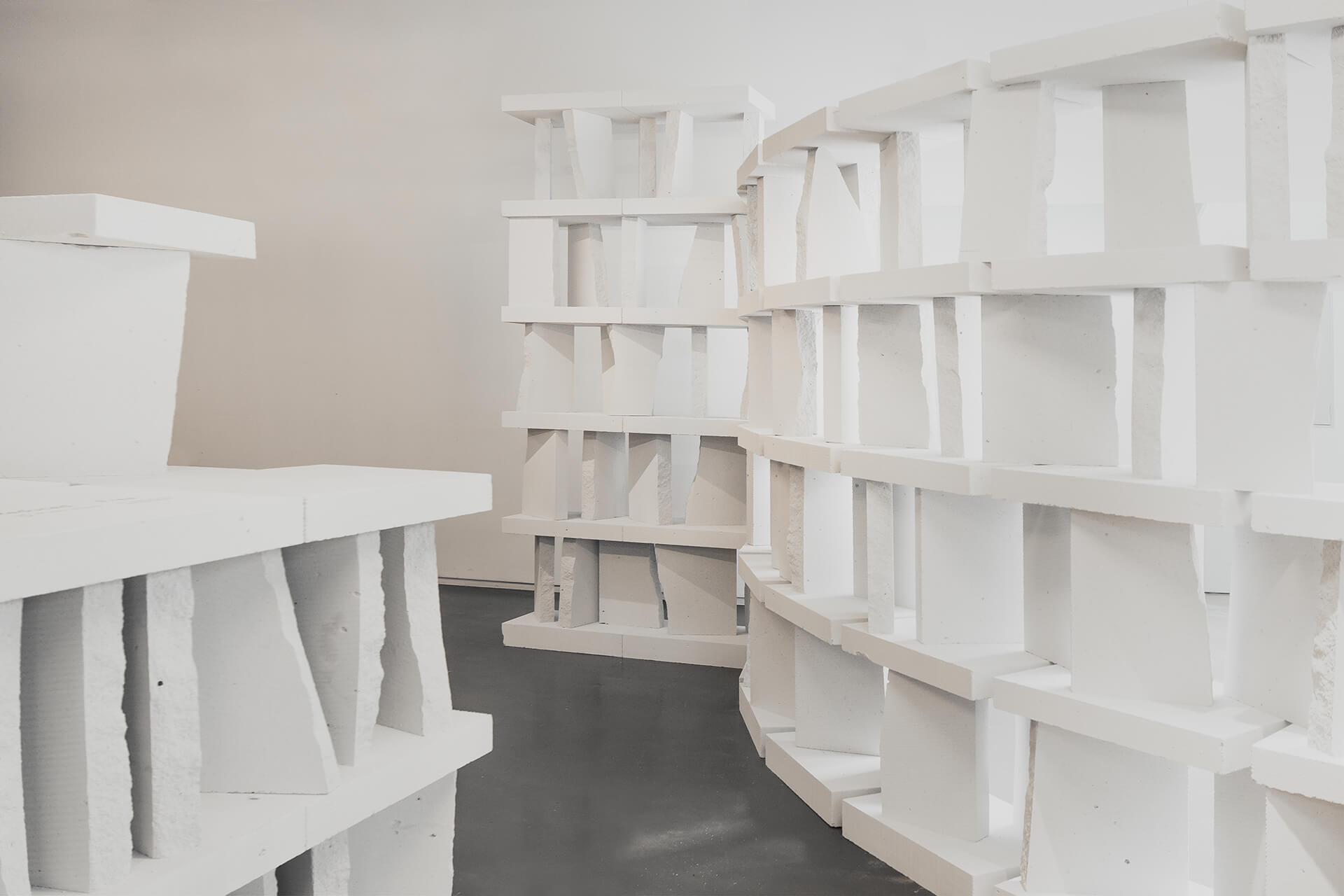 Collectible is known for exhibiting works of a very specific nature: the art-design objects must be produced in small batches, they must be functional and they must be contemporary in design. How did you respond to that specific context in your own design?

I was aware that in designing for Collectible I was operating within a realm of artists that were producing unique and special one-off objects. I became interested in the idea of the very opposite of this individuality - of common materials such as the brick. In the Netherlands there is a type of building block that is very typical. Nearly every house is built of the white stone we used in the installation, but it's rarely seen because it's hidden inside the wall. It's used as a fill and then clad with a more expensive material. I thought it would be interesting to use this common material and contrast it against these unique and very special pieces.

Are multi-sensory environments the future of scenography?

In a world where social interactions increasingly take place digitally versus face-to-face, I think the need for actual physical material qualities in sensory spaces are becoming more and more important.

To stay up to date on design-industry happenings during this time, sign up for our newsletter  here .