The car dealership typology as we know it is an endangered species. KPMG’s Global Automotive Executive Survey 2019 found that almost half of the industry’s leaders believe that between 30 to 50 per cent of car dealerships will be closed by 2030.

The report cites factors such as the shift from physical retail stores to digital channels, the rise of ride hailing and a decrease in interest in car ownership among younger consumers in mature markets.

This decline in brick-and-mortar automotive stores isn’t terminal, however; as the authors outline, the challenges now are ‘how to reinvent, reimagine and eventually rebuild and reorganize existing structures and how to identify new revenue streams for retailers’. For KMPG, any successful new strategy necessarily includes ‘small customer touchpoints, where a seamless brand experience and brand path is top priority’.

What might such spaces look like? We profiled a standout example in Lexus’s latest Intersect venue in New York in Frame 129. This hybrid restaurant-cum-embassy, parked between Chelsea Market and the local Soho House, certainly makes a much stronger case for urban consumers to spend time with the brand than any peripheral, product-stuffed showroom. 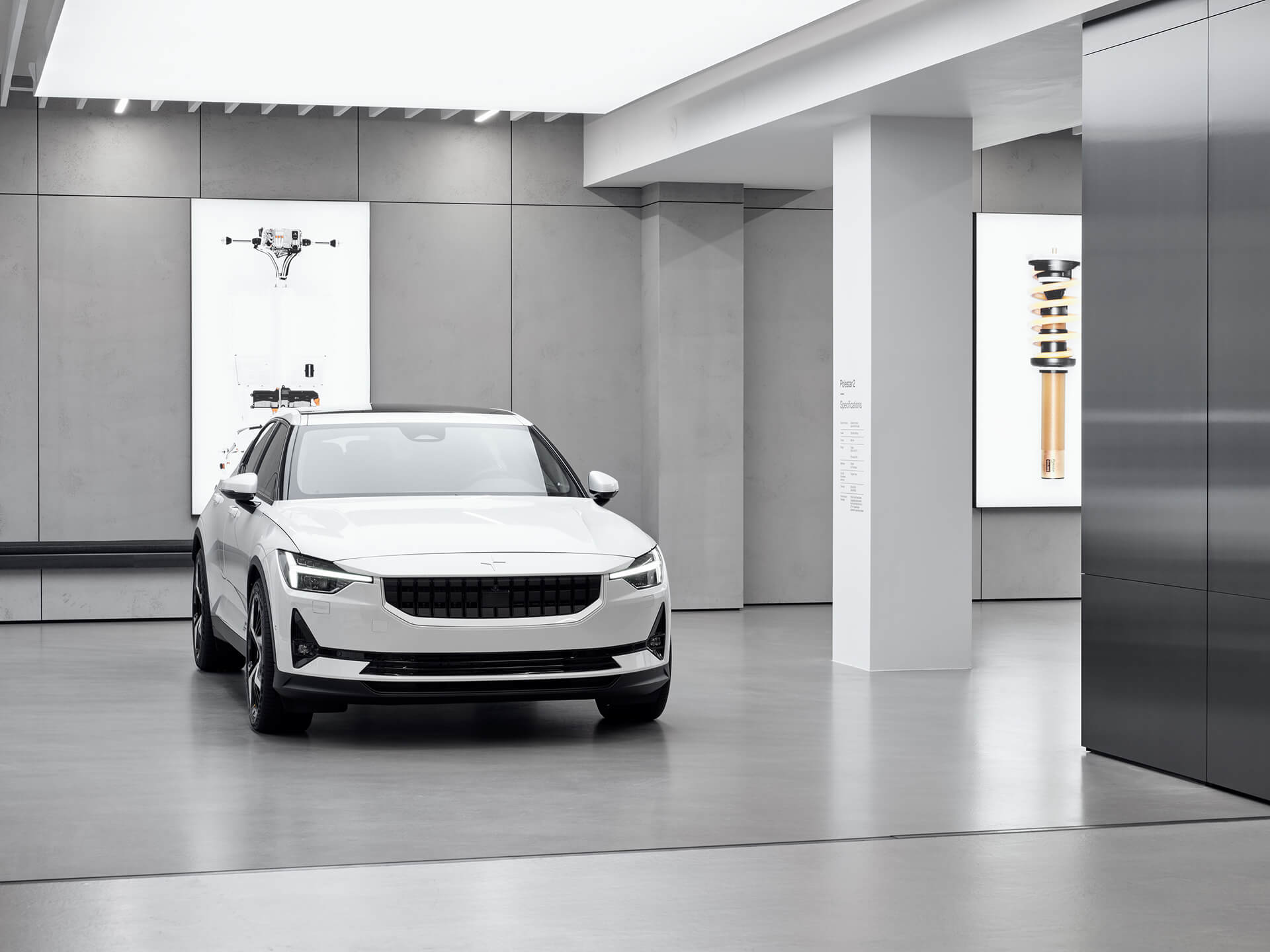 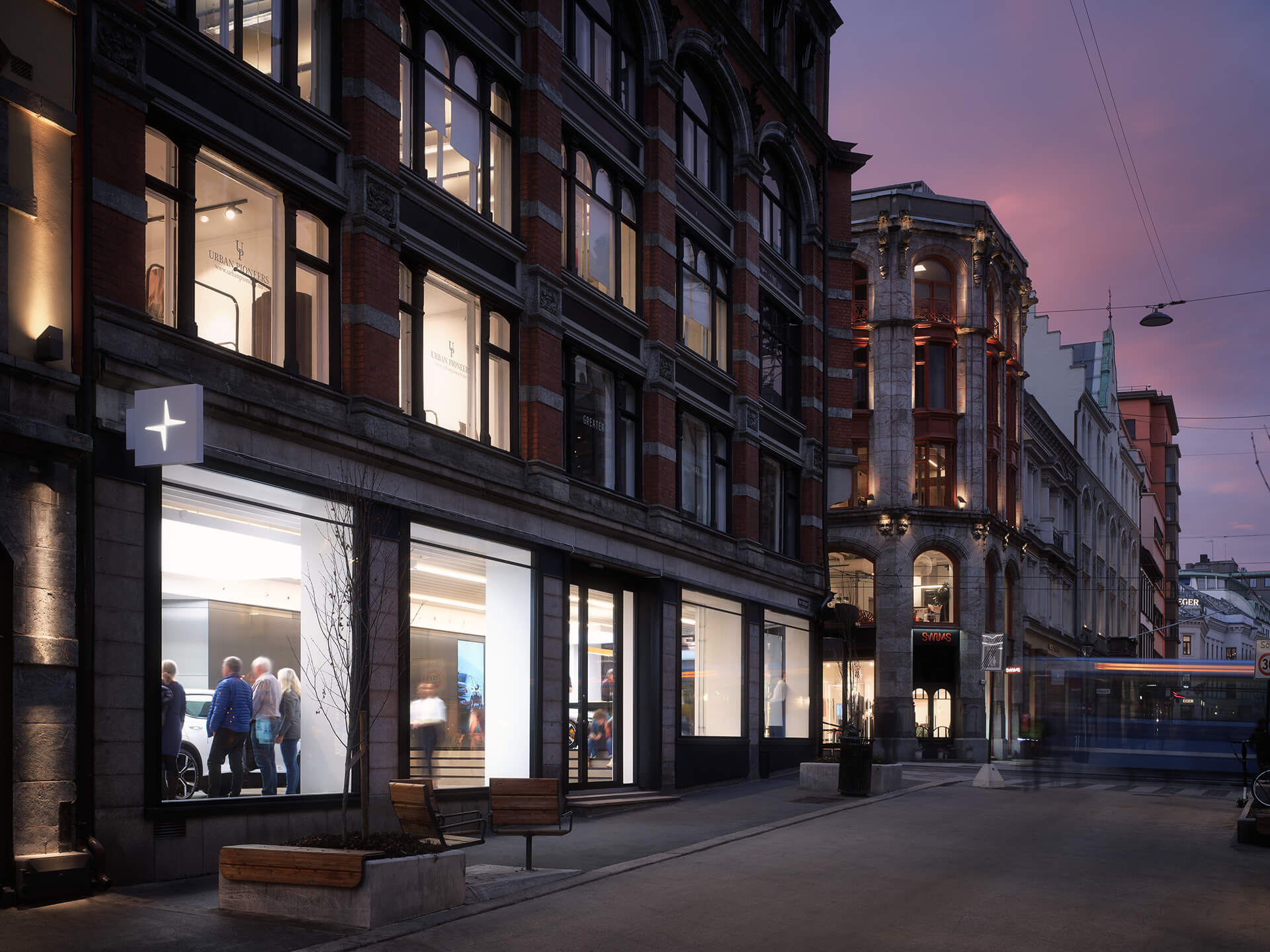 Since it only offers cars via subscriptions, Polestar focuses more on forging customer allegiance than on the hard sell in its showrooms.

Another example opened in the centre of Oslo at the end of 2019, the first European location of young Swedish automaker Polestar. As the business only offers cars on a full-service subscription model, the customer relationship is far more focused on the wider brand entity and less fixated on the product than that with legacy car makers. As such its venues need to work doubly hard to convince customers that the brand is a partner that can fulfil their desires for the latest innovations, design excellence and high levels of convenience. And not once, but in perpetuity.

‘The Polestar Space is our way of changing the face of automotive retail,’ says Jonathan Goodman, chief operations officer at Polestar. ‘With no salesmen and no vehicles on the forecourt, there is no hard sell, no requirement to shift stock and an entirely customer-focused journey.’

Without the imperative to chase commissions or shift prebuilt units, staff can concentrate on helping visitors use a range of retail technologies to explore and spec their potential vehicle. Central to this is an ‘atelier’ table that recognizes an RFID tag in individual trim modules, allowing customers to create a material mood board that will automatically be digitized and uploaded to their account. Polestar recognizes that its customers have a developed interest in subjects such as design and technology, which is why it hosts in-store talks. You’re more likely to spend time in a Polestar Space learning about architecture than kicking tires.

Perhaps the surest sign that automotive makers will retain an interest in brick-and-mortar venues came from Tesla’s 2019 missteps. The brand set an early precedent for elevating the car buying experience with its Bang & Olufsen-esque stores in heavy-foot-traffic city-centre and mall locations. But last year it announced that it would close many of its locations in favour of pushing digital sales, passing on the savings to customers. CEO Elon Musk had previously revealed that 78 per cent of all orders for its Model 3 were placed online. But after shares took a hit and analysts questioned whether the average consumer was ready for this zero-touch approach, the company backtracked, committing to retaining about half of its stores and even raising the price of its vehicles by three per cent to pay for it.

This article was originally featured in our March/April 2020 issue, Frame 133. Get a copy here.