The last few weeks have represented a mass experiment in remote working worldwide. But with COVID-19 infection curves across many countries starting to flatten, talk of reopening office spaces in a bid to kickstart ailing economies is already in the air. Frame Awards 2020 speaker Despina Katsikakis, head of occupier business performance at Cushman & Wakefield, tells us the company had already helped 10,000 organizations and 1,000,000 people back to work in China by the beginning of May. She’s unequivocal that the central office does still have a future. While remote working has proved surprisingly effective for many, client surveys have shown Cushman & Wakefield that a complete lack of face-to-face interaction is something employees struggle with. At the same time, nearly three in four people in the US say that post-COVID-19, they will be somewhat or very concerned about illness spreading in their workplace, according to a report by GP PRO. Resolving this friction will require that office spaces undergo radical adjustments both in how they are operated and what services are provided. In the first of this two-part series on what those changes might look like, we discuss how workplace design will begin to place more emphasis on choreographing the movement of occupants. 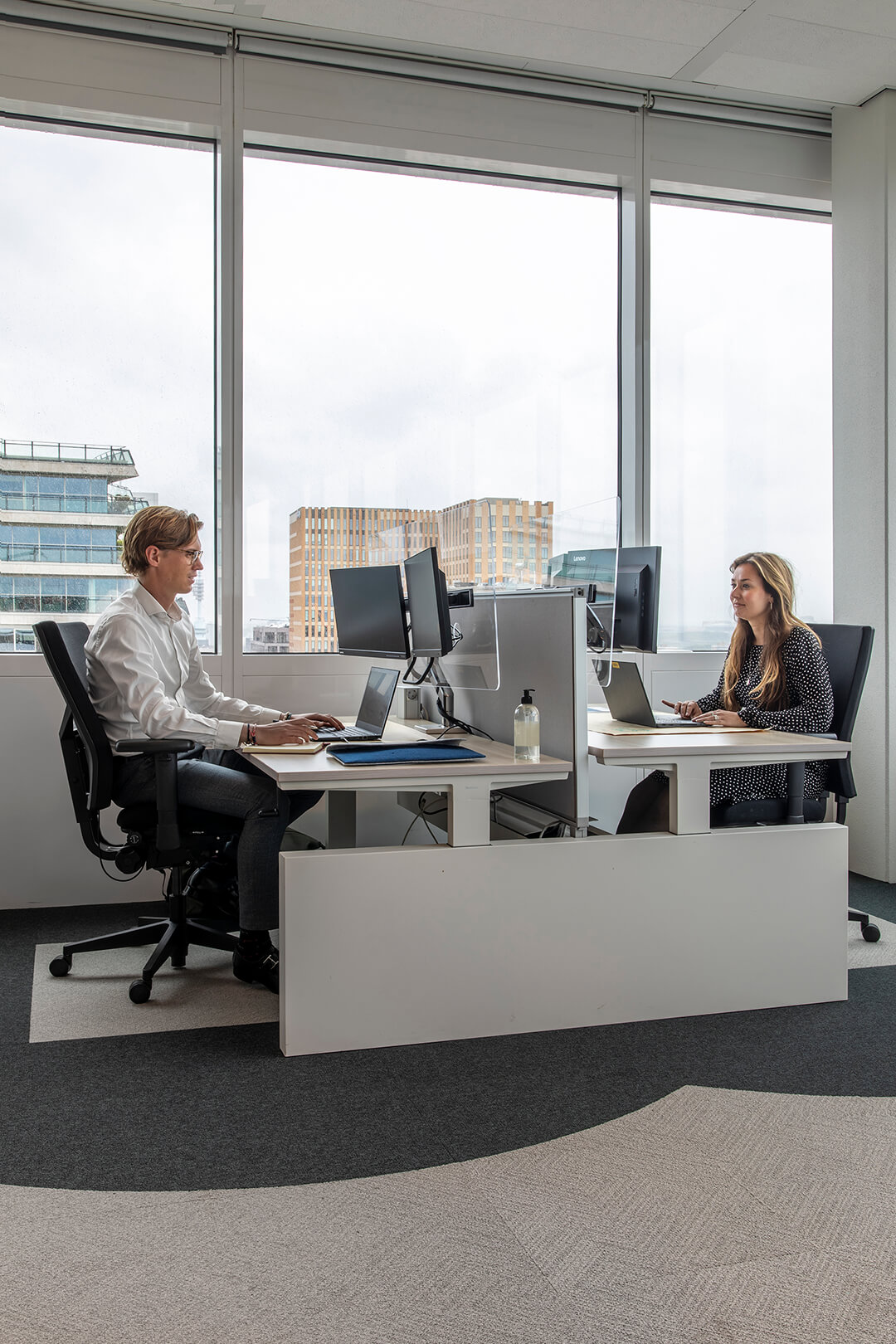 Header and above: Cushman & Wakefield implemented a Six Feet Office concept at its Amsterdam office, not only creating more space but devising new graphic languages around wayfinding and distancing too. Photos: Courtesy of Cushman & Wakefield

While proprietary offices will persist, what does seem inevitable is a reduced concentration of staff in such spaces. ‘I think the notion of putting 7,000 people in a building may be a thing of the past,’ said Barclays’ CEO Jes Staley. ‘And we will find ways to operate with more distancing over a much longer period of time. Keeping staff two metres apart is pretty much impossible on a busy trading floor, unless you sharply reduce the number of people in the office at once.’

What this hints at is a future in which staff do still visit the office for specific purposes or on select days, but combine that with working at other offsite locations. Research by Global Workplace Analytics predicts that up to 30 per cent of people will continue to work from home several days a week post-pandemic. Many first-stage reoccupation proposals already include provision for companies to work in an A- and B-team structure. It looks like a behaviour that might stick.

As employers come to terms with operating teams that are constantly shifting between spaces, they are going to have to develop systems that help them manage where people are at what time, when they have to be together and when they can be apart. They will need to work across contexts, from home to car to office, and from room to room. This idea of choreography – directing movement – will inflect every aspect of the relationship between user and an office space that is, perhaps for the first time, truly ‘agile’.

The need for more space is a given, of course. ‘I think we'll see wider corridors and doorways, more partitions between departments, and a lot more staircases,’ Arjun Kaicke, head of analytics at Zaha Hadid Architects, tells The Guardian. ‘Everything has been about breaking down barriers between teams, but I don’t think spaces will flow into each other so much anymore.’ Space might not flow, but people will. To understand what that might mean, look at the Six Feet Office concept implemented at Cushman & Wakefield’s Amsterdam headquarters. Here the creation of more space was insufficient on its own – just as fundamental is the implementation of new graphic languages for wayfinding and distancing that mediate how people move through this extra space. WeWork have also made a point of creating new behavioural and wayfinding signage as part of their reoccupation strategy. Giving people simple signals as to where they should walk, stand and sit will help users both feel safe themselves, and also reduce anxiety that they might be endangering others.

Cushman & Wakefield is also going beyond the analogue to include greater use of beacon technology that tracks where staff are congregating. This could be used to alert people when proximity levels in crowds get too high. Though it has seen greater adoption in recent years to track underutilization of space, HOK’s director of workplace Kay Sargent believes such sensor technology ‘is going to explode’. ‘Now it’s going to be used for the opposite — whether [space is] appropriately utilized,’ she said in a recent interview with The Washington Post. ‘Do we have the right spacing? Are there pinch points where there’s overcrowding?’ Understanding what audio or visual feedback can be embedded into the environment to indicate these infractions without causing stress will be an important design challenge. 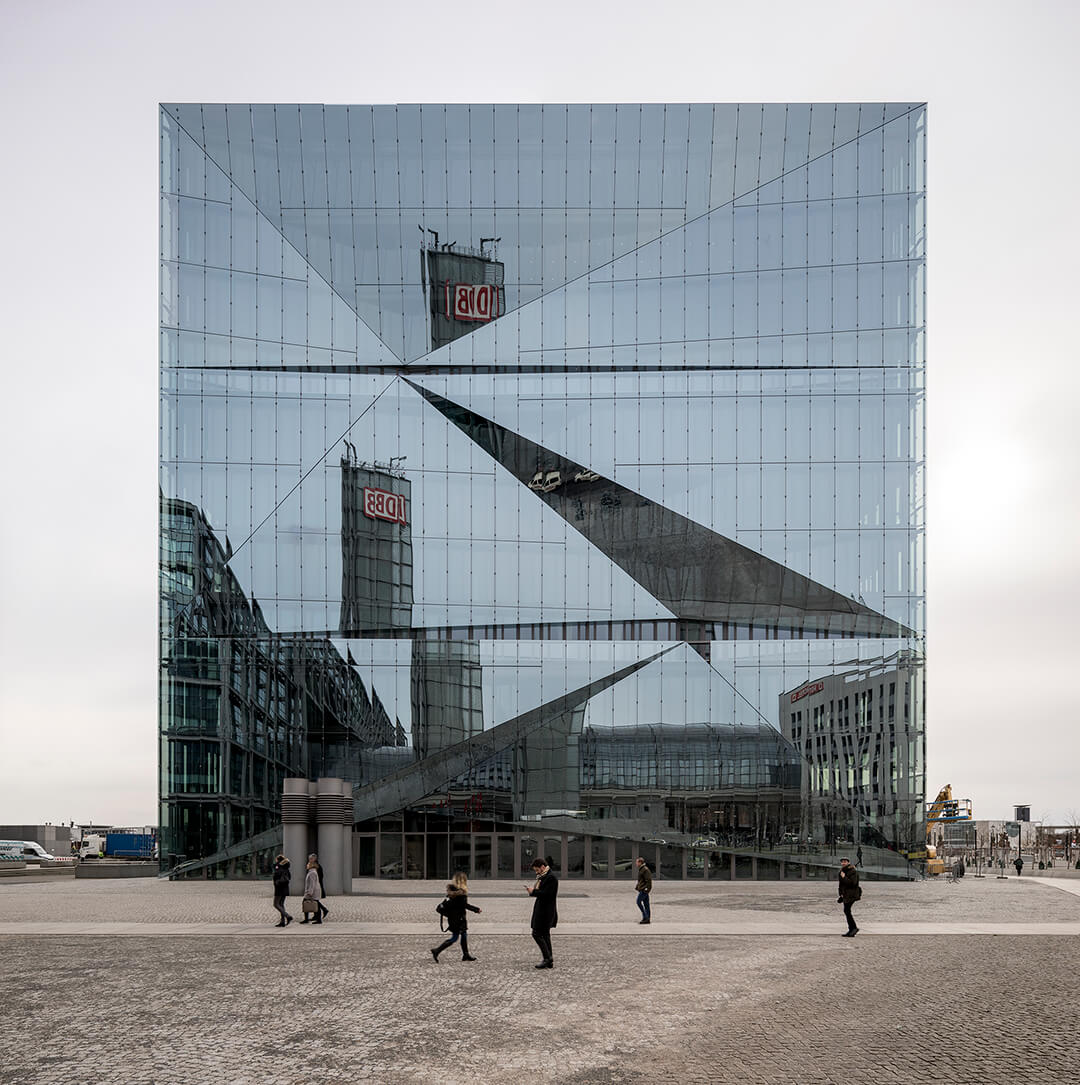 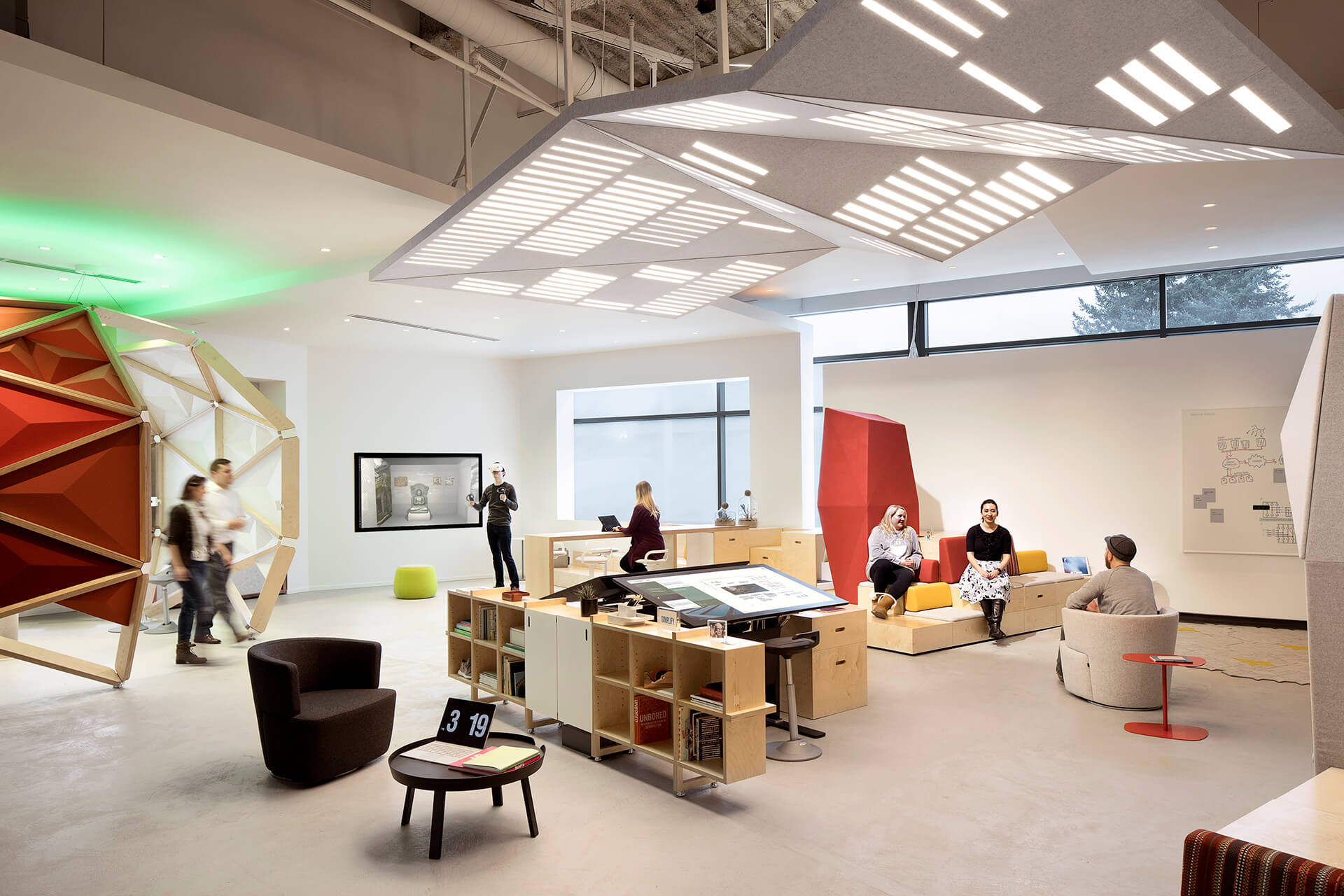 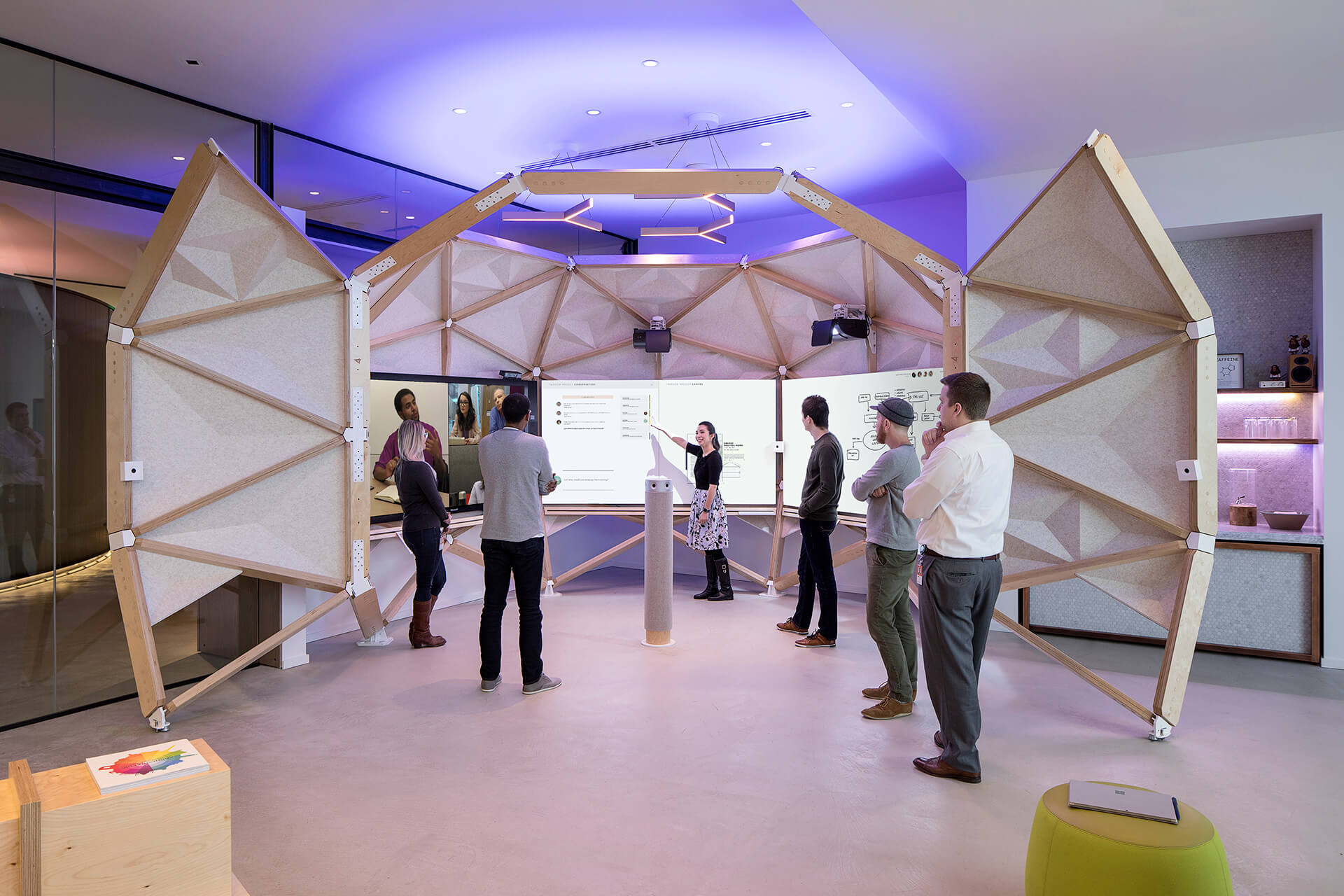 Indeed distancing will likely hasten the adoption of several ‘smart office’ technologies that streamline interactions between employees and their workplace. This might be as simple as automating frequent touchpoints, such as doors, elevators and sanitary systems. ‘Investment in technology to assist in the management of people flow and space occupancy, and to enable things to be "contactless” may indeed follow – but arguably this is just an acceleration of pre-existing proptech trends,’ Rosie Haslem, director at London-based design and research studio Spacelab, tells Wired.

This low-touch but high-interaction architecture should also encourage companies to embrace the sort of voice-based interfaces that are already common in consumers’ homes (consequently, currently also now their offices). Technology research group Gartner’s pre-pandemic predictions that a quarter of worker interactions with software will be voice-mediated by 2023, up from less than three per cent in 2019, are probably now too conservative.

More dispersed working will also likely hasten the adoption of infrastructure that enables meetings between offsite and onsite personnel to feel more immersive and engaged. Microsoft has long lead the way here. The 'meeting hexagon’ it developed with Studio O+A for its Envisioning Center in Redmond, Washington uses a variety of sensing and display technologies to help remote participants to contribute more fully. At its new Micropolis office near Amsterdam’s Schiphol Airport, designed by Dutch firm D/Dock, the tech giant also just opened its Holosuite, a dedicated mixed reality room at the centre of the building that allows employees and partners to explore how such technology might transform work and training.

One development that is likely to be able to adjust more quickly than most is Cube Berlin, which was due to open in March just as the pandemic hit. Devised by Danish architecture practice 3XN, its AI ‘digital brain’ connects the majority of internal systems to users via a mobile app. Operations that are usually isolated – such as access control, lift operations and HVAC – are linked so that they can work in tandem, learning from occupant preferences as well as their general behaviour. It will even let you know where to find a currently quiet spot in the building for concentrated work, or where colleagues you need to collaborate with have set-up. Propositions such as this have existed before, but Cube Berlin’s adaptability – it can not only learn, but also integrate new forms of technology over time – make it more resilient to changes in work culture.

Those technologies might include something like Gensler’s ReRun, a social distancing tool that uses generative algorithms to indicate where staff should sit within a given seating arrangement to remain within safety guidelines. What if such tools could also start to take into account all the potential layouts enabled by the flexible furniture systems companies have long invested in, but under-utilized? ‘The whole point of kinetic furniture was to bring people together,’ Kelly Griffin, a principal at architecture firm NBBJ, tells The New York Times. ‘Now it has a different function: to pull people apart.’ A building that could tell users how best to orchestrate its interior would be safer in the short term, but perhaps also more comfortable, convivial and creative for when the world does get back to work.

To stay up-to-date on how the design industry is combatting the COVID-19 crisis, sign up for our newsletter here.