How to make public facilities transparent? For Molter Linnemann, it's clear as water

Any Psychology 101 class up to snuff introduces Maslow’s hierarchy of needs early in the semester – the iconic five-tier pyramid outlines what humans fundamentally need to survive. Safety is the second most important concern – it’s why we install insanely expensive alarm systems, ask our friends to alert us when they return home and turn down the heavy metal when we ride bicycles. If we so fastidiously take these precautions, it’s important the space we inhabit follows suit. For German architecture practice Molter Linnemann, this was the driver behind their Galgenberg water reservoir project.

Galgenberg is a hill south of Zweibrücken, a town at the border junction of Rhineland-Palatinate, Saarland and France. Zweibrücken has around 35,000 inhabitants, but it doesn’t have a natural source of fresh water. Because it is essential to the physiological wellbeing of humans, the project nods once again to Maslow: there is nothing more important for our survival than to be able to eat, drink and be sheltered. And yet, when it came to redesign the reservoir, there was an obvious problem: large-scale maintenance would mean interrupting the cities’ water-supply. If the facility were to be updated, it would mean that operation would have to continue in the midst. 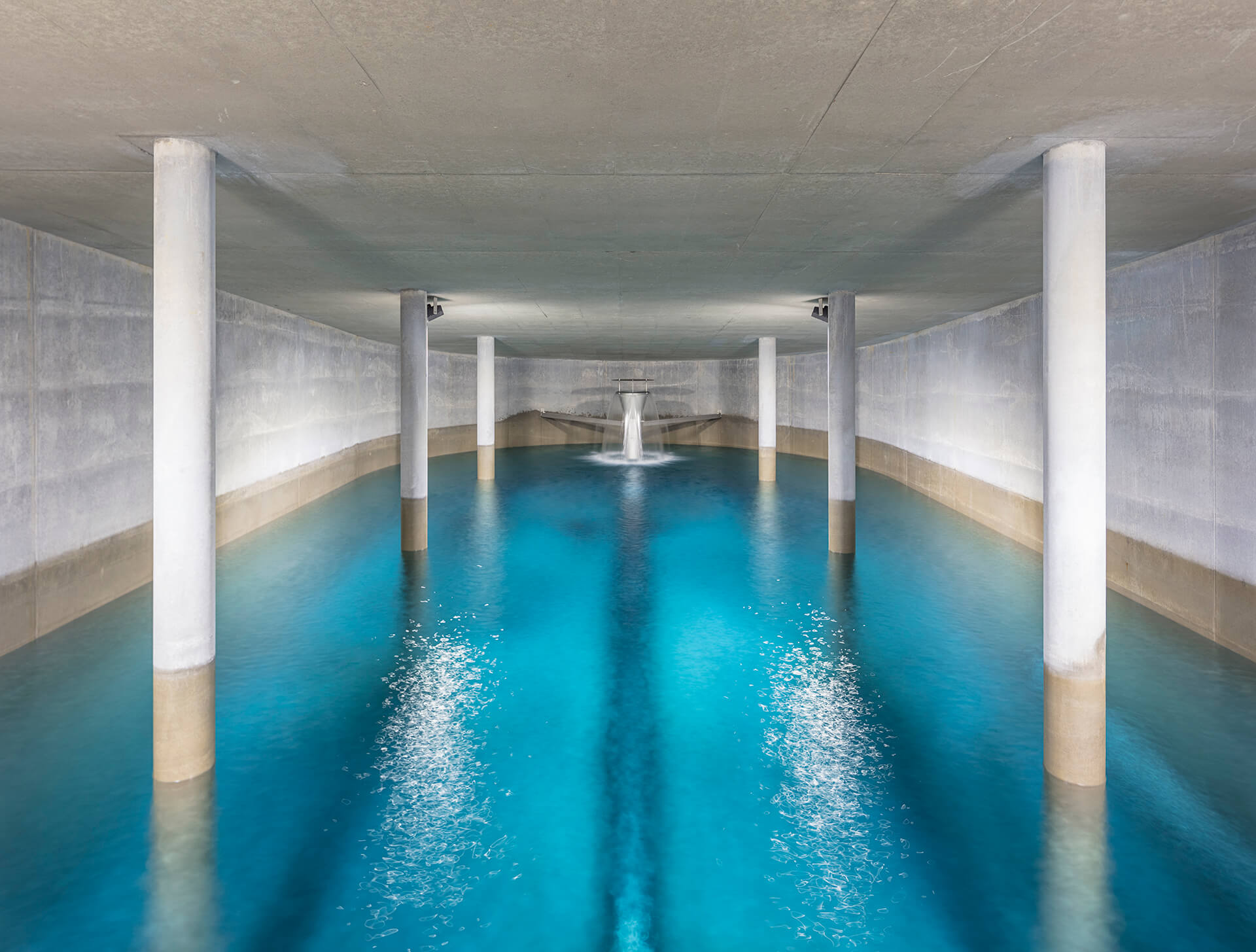 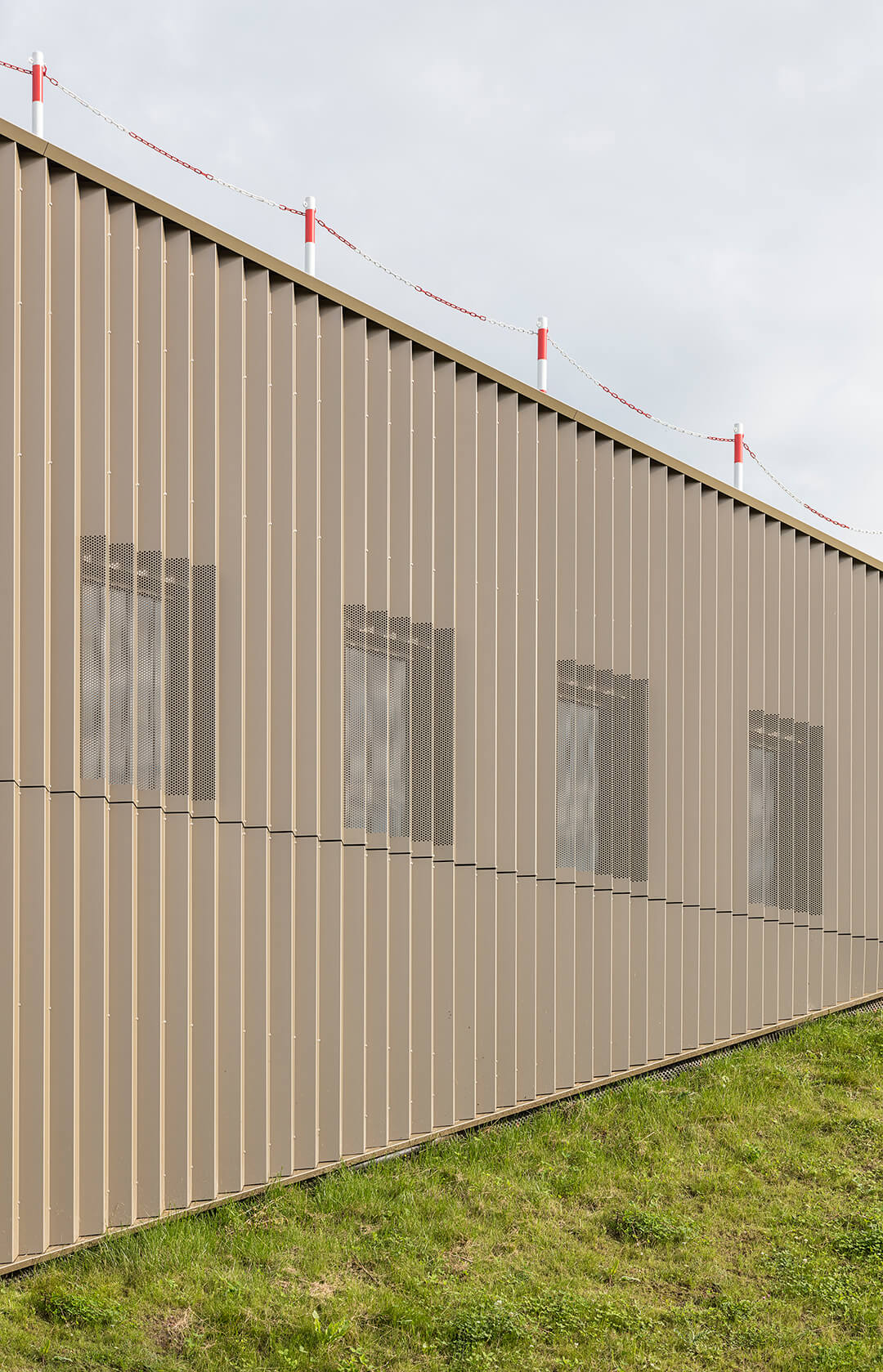 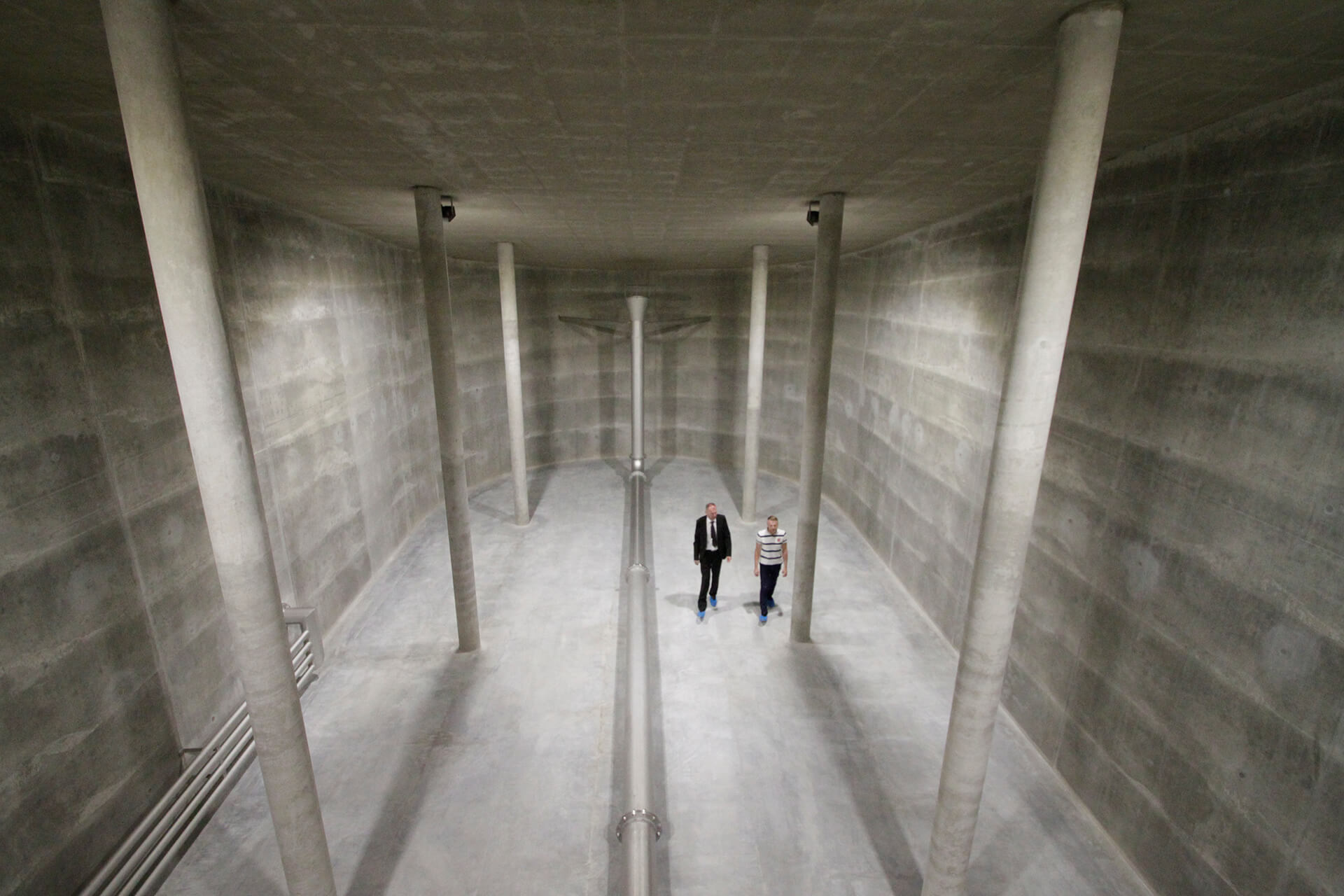 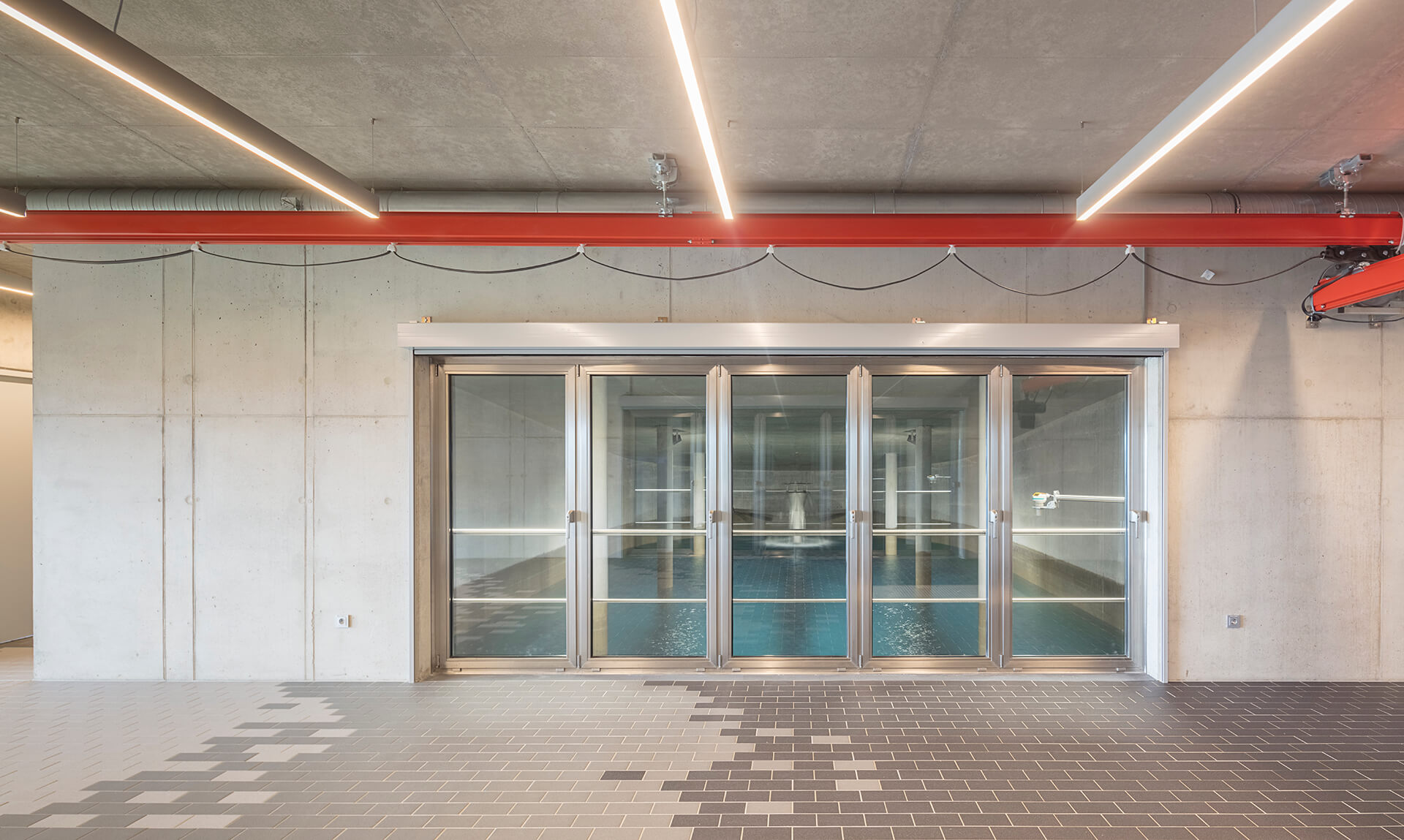 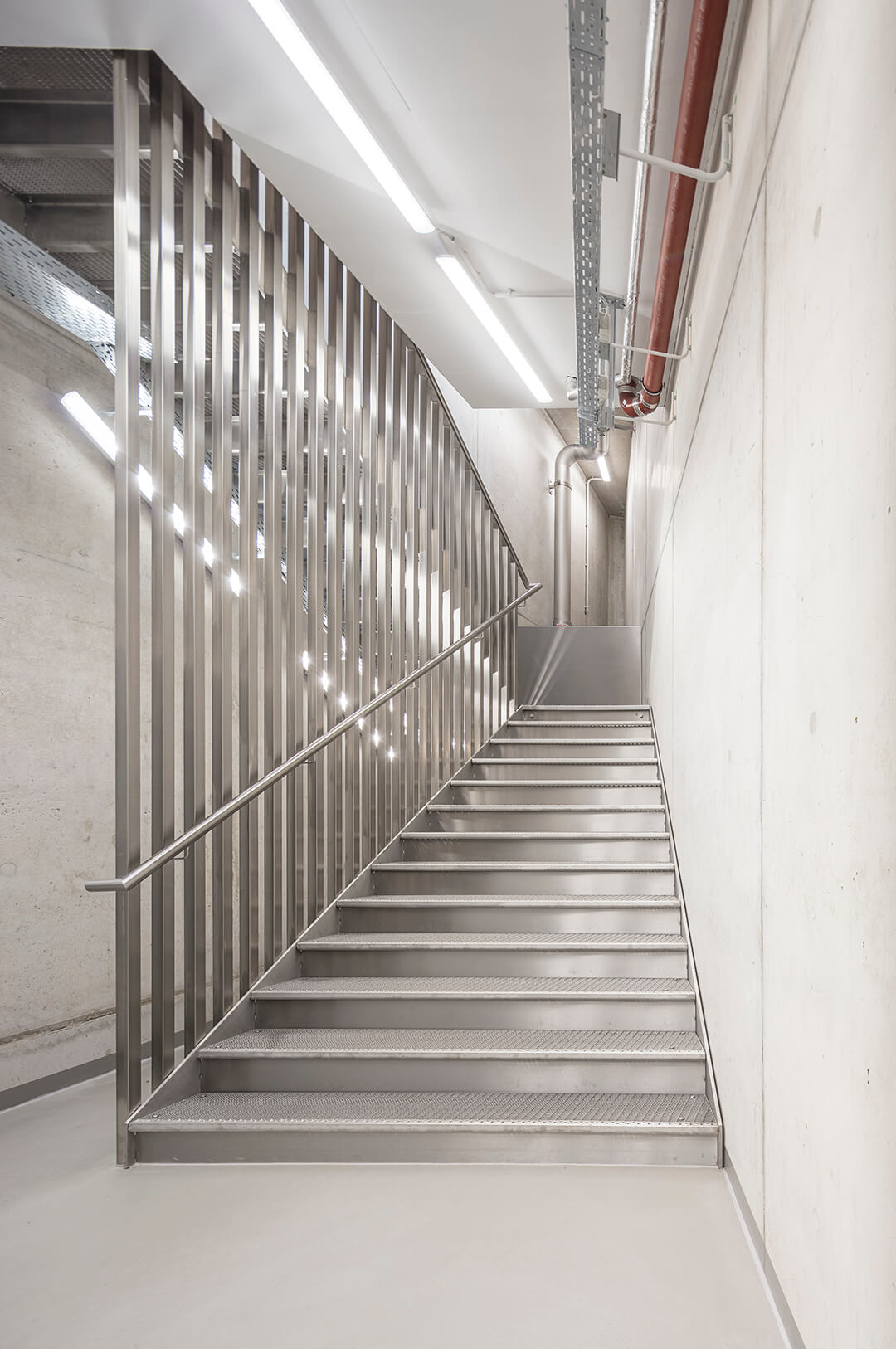 That’s where Molter Linnemann stepped in. The client, a water company, decided to build a new reservoir with two water chambers to modernise the facility and allow for increased capacity. The brief requested efficient design with a minimal footprint – design that would not disrupt the surrounding landscape. In past work, the firm had paid much attention to the concept of security, asking themselves how it would be possible to feel safer and more secure in the society and spaces we live in. So, for the new iteration of the 75-year-old Galgenberg reservoir, they sought to make the operation of public facilities visible, communicating their importance in everyday life.

The project calls to mind the infrastructure we rely on that we hardly participate in – our trash gets taken away for us, our water is filtered for us and we do not see how our imported produce is handled before it gets to our plates. Every day, doing the most basic of things, we put ourselves at risk. Galgenberg takes that ambiguity and makes it transparent: in a world that asks us to put so much control in the hands of others, it’s compelling to see a structure that relinquishes some of that mystery and meets users half-way. That’s why the motif of sight was necessary to convey this narrative: a window in the façade resembles an eye, creating a vantage point for observation. Folds in the metal cladding create optical illusions and the agricultural buildings in the vicinity provoke a game of camouflage.

Molter Linnemann made Galgenberg water reservoir look as if it could be an annex to a modern art museum. That, in itself, is an accomplishment that underlines the potential that design has to inject public emotion into public facilities that’d otherwise be left under lock-and-key.