‘There is physiological evidence that environmental enrichment improves brain function,’ declares Govert Flint of the Enrichers.

Environment enrichment involves physical and social stimulation to increase brain activity. For example, raising laboratory mice in groups with toys, ladders, tunnels, and running wheels has been shown to have a positive effect on their problem-solving skills, physical health, and even their ability to resist drug addiction compared to mice raised in standard cages.

‘The mice in enriched cages had a higher resistance to disease and increased lifespans,’ says Flint. ‘This was researched in the 1940s, yet neither in architecture nor design are people designing with this knowledge.’

So Flint has made it his personal and professional mission to enrich as many different environments as possible: starting with the workplace. ‘People spend most of their time at work, yet offices have the highest poverty of environmental stimulation,’ he says.

Flint and his design team created three Enriched Office environments at The Base; business facilities at Amsterdam’s Schiphol airport that can be booked for meetings or working in groups. ‘The office is a bit tricky because people need to concentrate,’ Flint says, acknowledging the fine line between stimulation and distraction. The Enrichers were guided in this by the Professor of Neurobiology at the University of Cambridge, Professor Jenny Morton. ‘Jenny advised us that there’s no such thing as one perfect environment,’ says Flint, ‘which is why we developed three work environments, with different levels of stimulation for individuals to choose from.’ 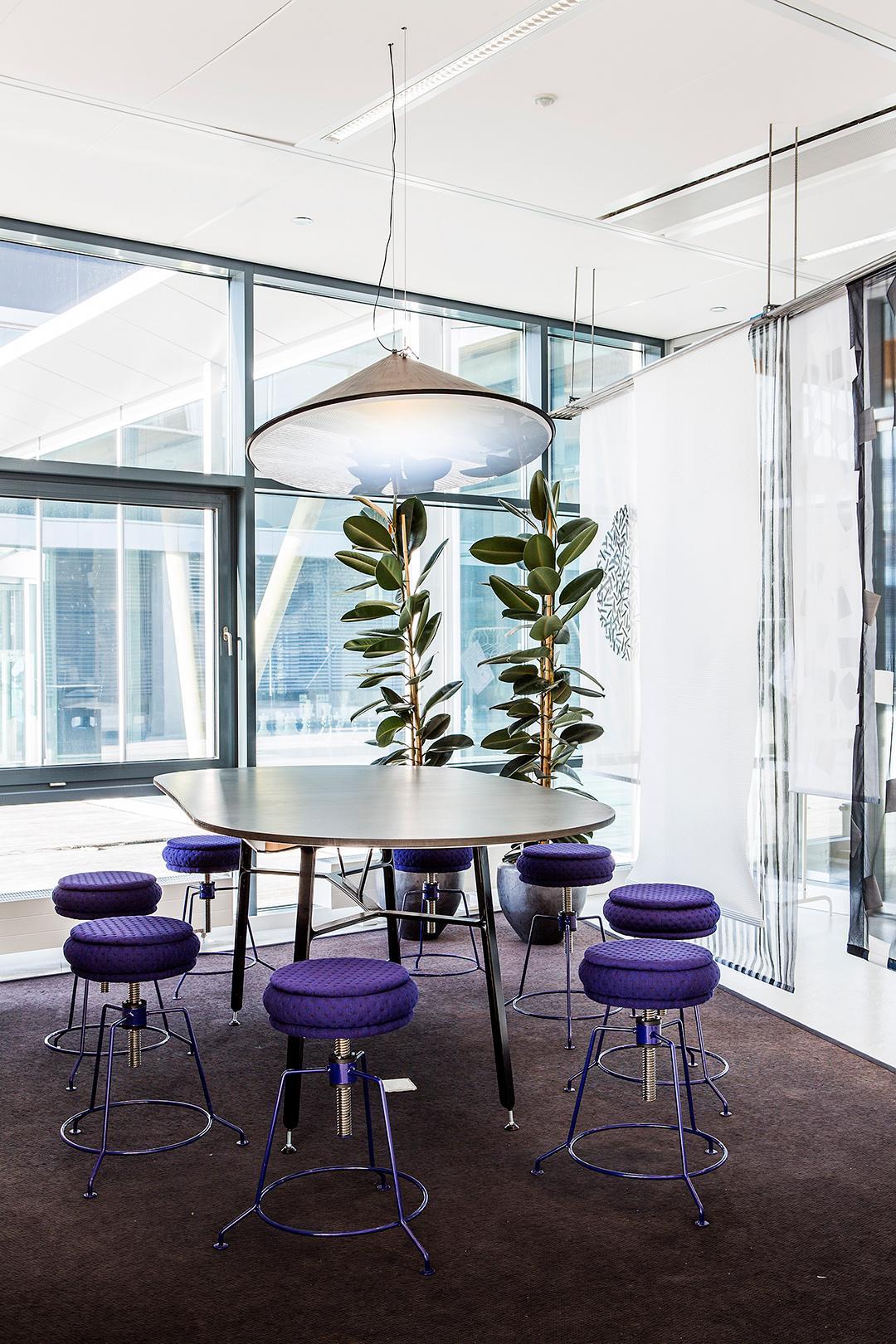 The Plain room in The Base Schiphol. Photo by Bart Brussee

The least intense room is the Plain room. It may appear fairly ordinary, but the Blue Sky Lamp by Chris Kabel mimics sunlight shining through the atmosphere, ‘because when people are exposed to natural light it’s better for them, it helps to regulate the circadian rhythm,’ Flint explains. There’s also more to the purple Moonraker stools than meets the eye. Designed by the Enrichers, the seats are composed of an airbag ‘sandwiched’ between two flat surfaces.

Moonraker lives up to its name by replicating the wobbly weightlessness you might experience on the moon, as balancing on the air cushion encourages movement in the hips and lower back and massages the cartilage of the joints. The Plain room is also equipped with privacy screens by Aliki van der Kruijs and Roos Gomperts – the Transpose Coulisse room divider allows the space to be enclosed or left open to the connecting hallway.

The enriched room with a medium level of environmental stimulation is called Spicy. 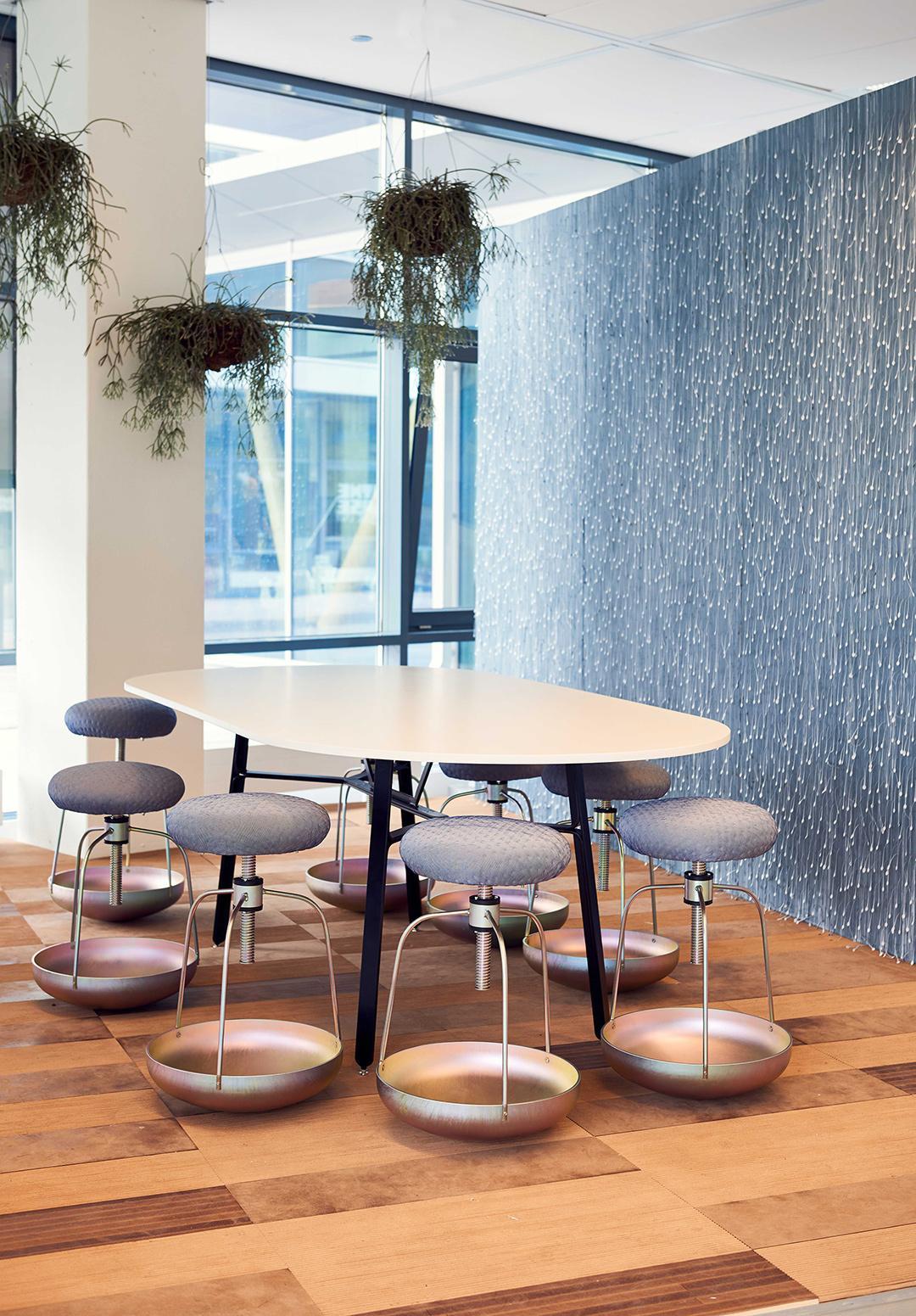 The Spicy room in The Base Schiphol. Photo by Mark Kuipers

‘In this room, the table is treated with paint that responds to UV light,’ Flint explains. Designed by Luuk van den Broek for the Enrichers, the UV table turns purple when exposed to UV light, while the surface under papers, laptops or hands remains white. ‘So you can draw with shadows and create shapes with shade,’ says Flint. And even the wallpaper here plays with light. ‘The Mirabilia wallpaper by Alissa+Nienke is 3D – the cut-outs cast shadows, and it moves a bit like leaves.’

The rounded base of the Buoy stools in the Spicy room require even more balancing and activation in the legs and lower body than the Moonraker stools do. Sitting on Buoy requires bigger movements and greater muscle control, which triggers the motor area of the brain to contribute to wellbeing while at work. 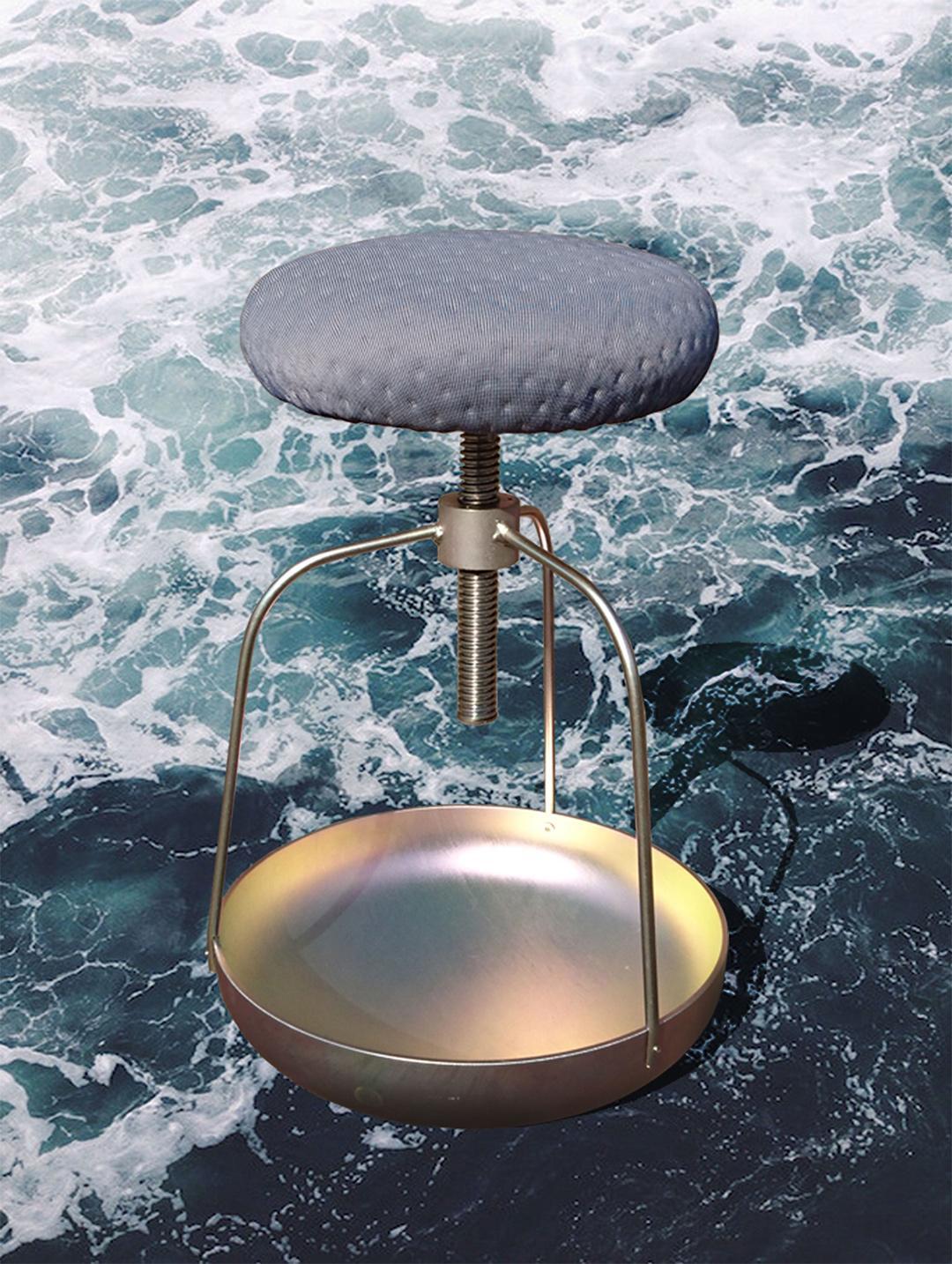 Finally, the most intensely stimulating of the three is the Extra Chunky room. ‘All our environments are artificial nowadays, so everything needs a certain amount of enrichment,’ says Flint. Enrichers demonstrates that it’s possible to create stimulating business environments which are functional as well as fun. 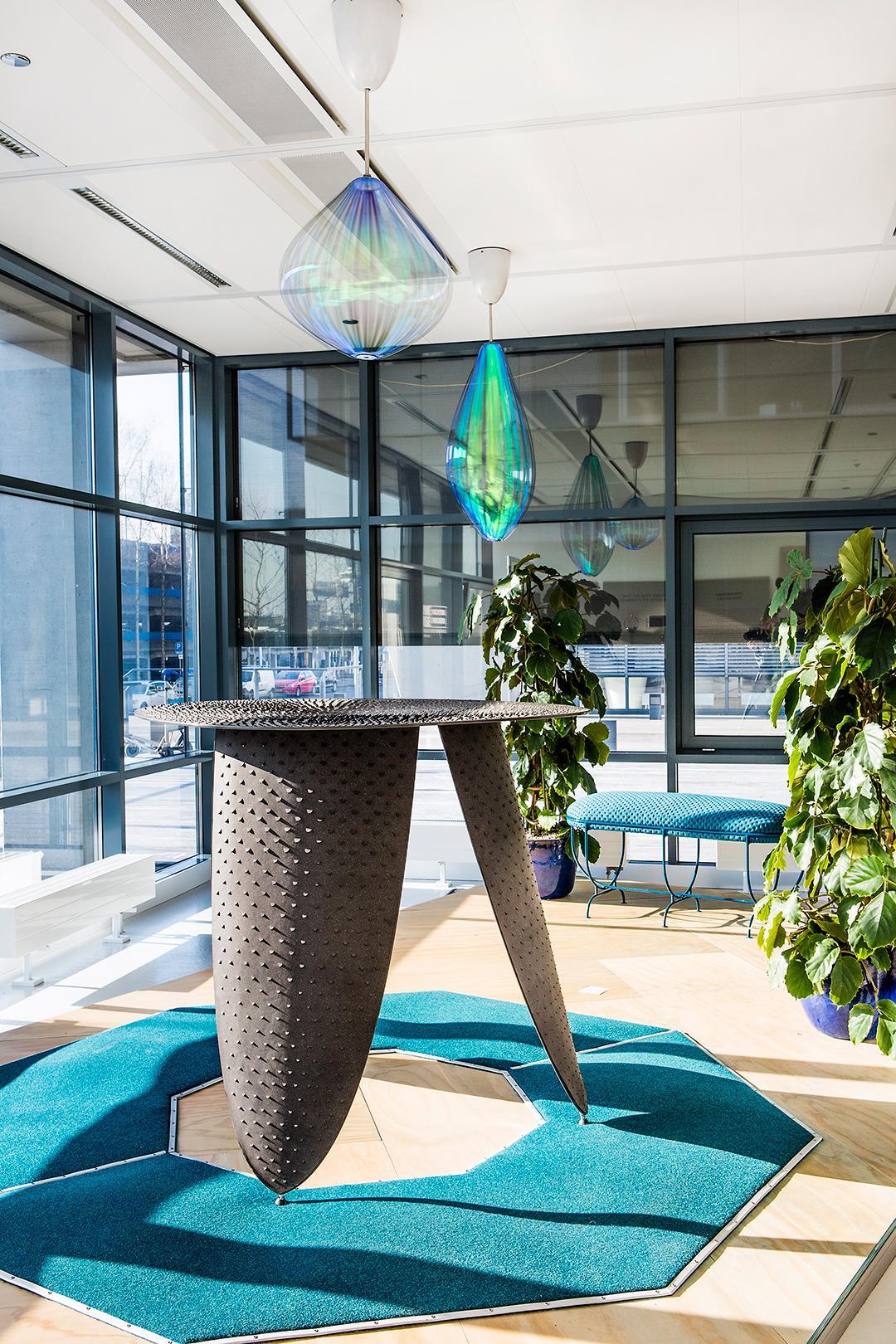 The Extra Chunky room in The Base Schiphol. Photo by Bart Brussee

At the centre of the Extra Chunky room is the leathery Elephunk standing table designed by Alissa+Nienke, which is surrounded by the Enrichers’ Floatiles. The green-carpeted tiles are filled with water, recalling the waterbeds of the 60s and 70s. ‘You’re basically standing on water,’ smiles Flint.

The seating in this room, the Bambata bench, is also filled with water. ‘Bambata looks ordinary, even when you sit on it,’ says Flint, ‘but when a second person joins you, you can feel each other’s movements – and it evokes social interaction. People strike up a conversation with each other as soon as they sit down.’

Chairs that balance on bowls, benches filled with water – you would be forgiven for assuming that the Enriched Office environments are simply a promotional stunt, or a one-off awareness campaign. You would be wrong, however. Moonraker, Buoy, and Bambata are all available for purchase on the Enrichers website, although the tables and other furniture are prototypes by the designers they collaborated with.

So what’s next for the Enrichers?

‘We have a collaboration with NS, the Dutch Railways,’ says Flint. ‘We’re going to put the waterbench in the trains, and also some moving pillows, and the water Floatiles. And we’ll be doing some user testing to see how people respond to it.’

The Enriched Office at Schipol Airport’s Business Centre can be booked for a limited time only.