Hybridity, biophilia and sharing are key to the homes of tomorrow, say #FrameLive panellists

The connection we have with our homes has fundamentally shifted since the close of the last decade. Why? They’re no longer just our residences anymore – they’ve become the workplace, the gym, the classroom, the restaurant and so much more since the outbreak of the COVID-19 pandemic. Our team became curious to understand how this evolution in use will impact residential design in the short and long term, wondering what a ‘full-service’ home of the future will look like. We turned to industry visionaries Peter van Assche, founder of Bureau SLA, GG-loop founder Giacomo Garziano and Cutwork founders Kelsea Crawford and Antonin Yuji Maeno – all from Frame Awards-winning practices – to share their thoughts and insight on the subject.

‘There are conditions that we are experiencing now that have become standard,’ Garziano started off by saying. ‘We as architects, we have strict rules, standards and norms to follow, and if we followed these standards strictly what we would get is a space that is most probably functional, but without quantitative benefits. Before the pandemic, he had already begun researching ‘a paradigm that we could follow in order to design healthy environments that are not only functionally correct, but also nice to live in’. That mission – especially as he is now analyzing what we can learn from the pandemic’s intersection with the climate crisis – has become even more imperative. 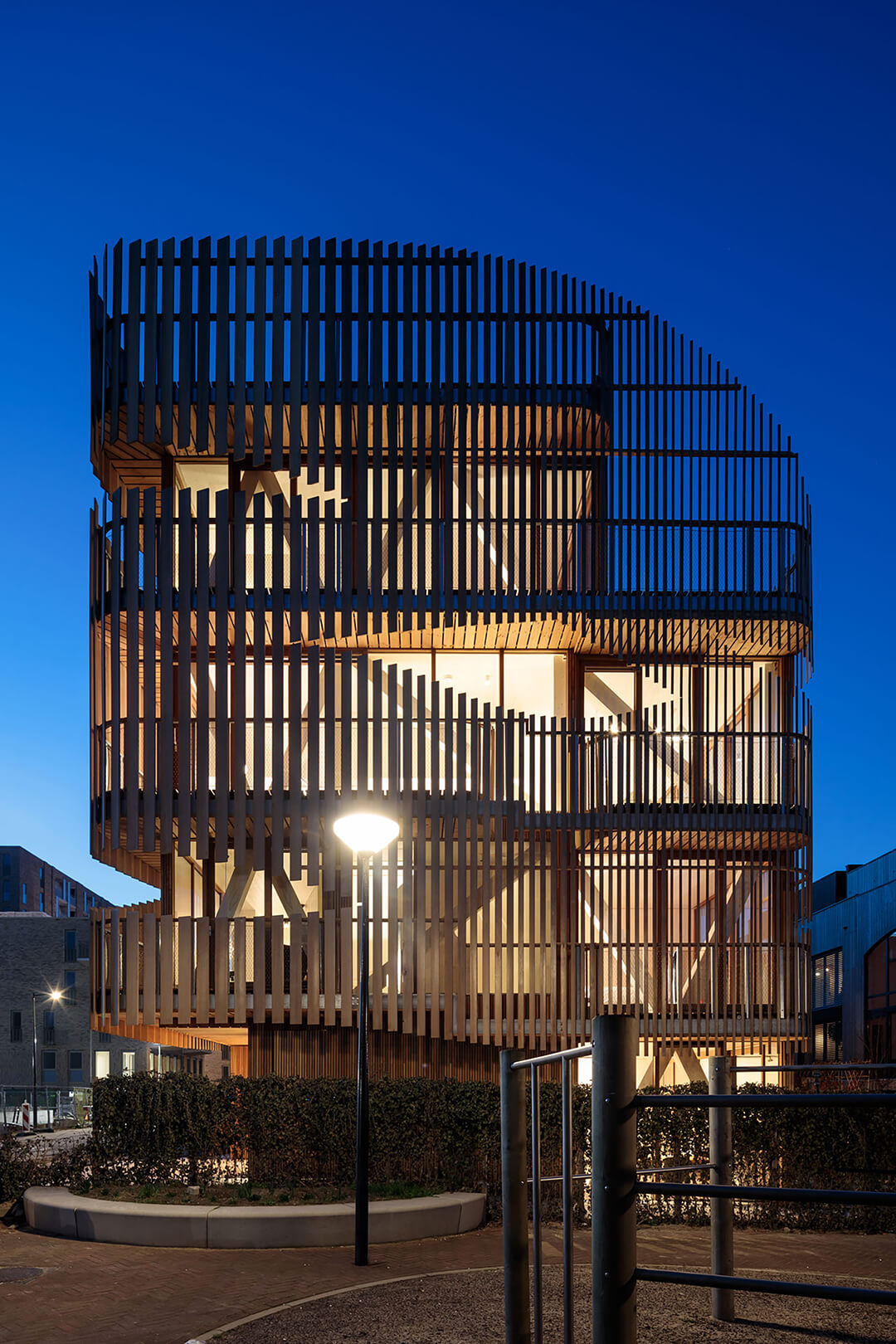 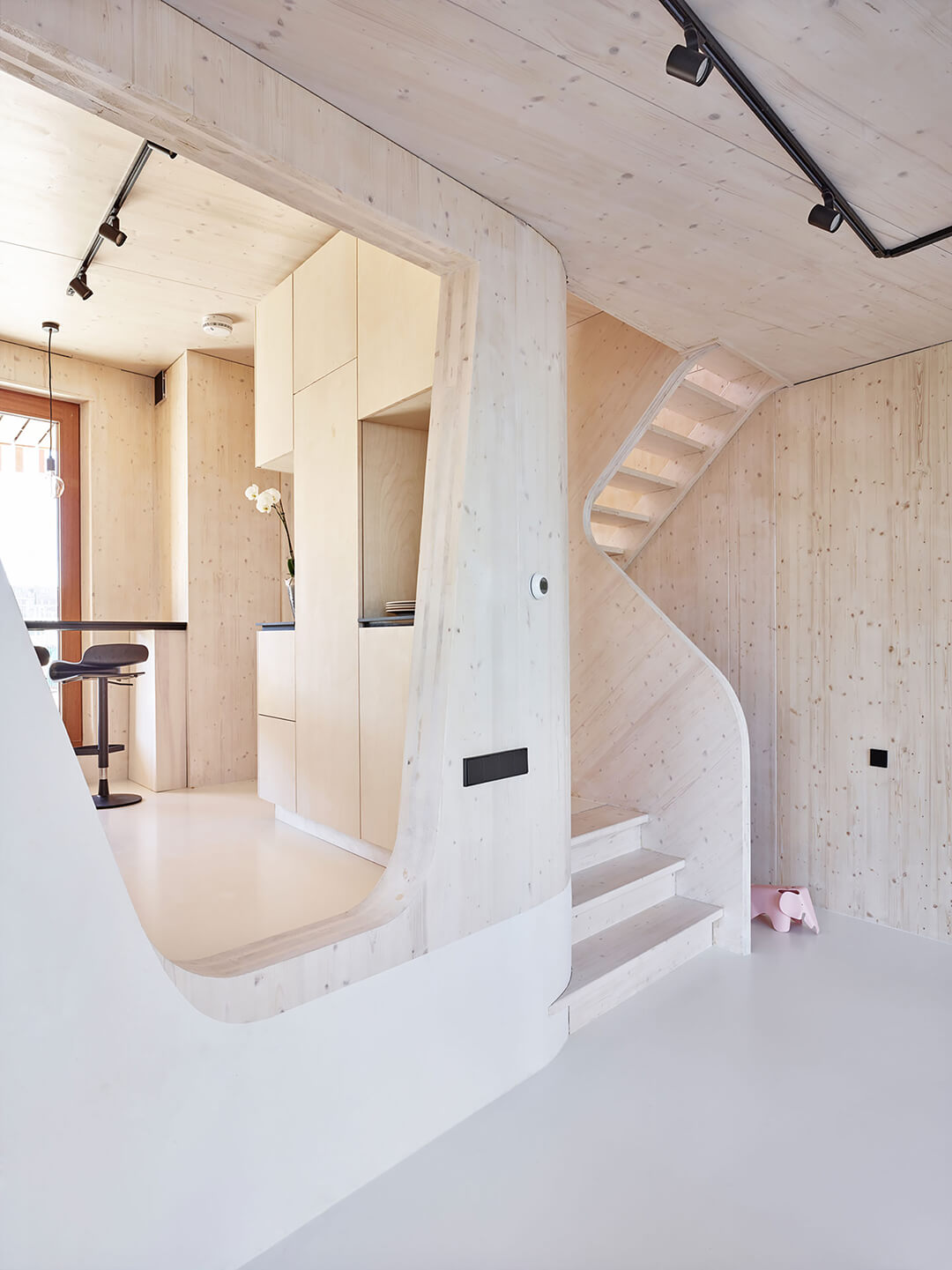 For Yuji Maeno, pre-pandemic residential design in urban environments was largely about the idea of the ‘city as an extension of a living room’. Looking at his own city, Paris, he said, ‘that’s what we miss right now’, mentioning the inability to gather on terraces, arguably the capital’s primary social spaces. Crawford said, ‘[The quarantine] showed the limitations of our personal space, when we’re so used to being able to go out into the city to fulfil our need to socialize, to work, to eat and to have entertainment…and then when suddenly we’re forced to do it all within our houses, we have a very different relationship with the city.’

Van Assche, who sees the quarantine as having unlocked inventiveness and creativity within people, followed by sharing an image of Christo and Jeanne-Claude’s 1970 installation, Valley Curtain. ‘Now, in the lockdown period, we are all thinking about how to make separations, how to make divisions, how to make distance,’ said van Assche. ‘This stands for me as a metaphor for the [time]  we are in…it shows how beautiful separations can be.’ Citing the human-focused elements of Christo and Jeanne-Claude’s work, he explained the project illustrates how ‘we should never lose [sight of] or forget the social issues and dimensions that make our lives as designers and architects worth living for’.

Cutwork believes that the rising prominence of people working from home will transform residential design, making hybrid spaces more relevant. ‘People will want a more intentional home office set-up,’ Crawford said. Flexible, ‘elastic’ interiors and objects a recurrent theme in their work, they are currently looking at how to create a kit of furniture that is adaptive to people’s new multi-functional needs in the home. Referencing a previous #FrameLive talk on post-pandemic workspace design, she continued: ‘The office is coming in to the home but it won’t look like the office as we know it now. It needs to be refined, to have a different flavour to really meet how we use it today.’ Yuji Maeno responded, saying there’s ‘a lot of gain for design’ as society rethinks everyday rituals and gestures in the pandemic era. ‘That’s how design emerged, no? When there are new behaviours – new rituals – you need new objects.’ ‘There are usages that we can’t even imagine right now,’ replied Crawford, ‘as designers, it’s really important to leave space for this to express itself.’ 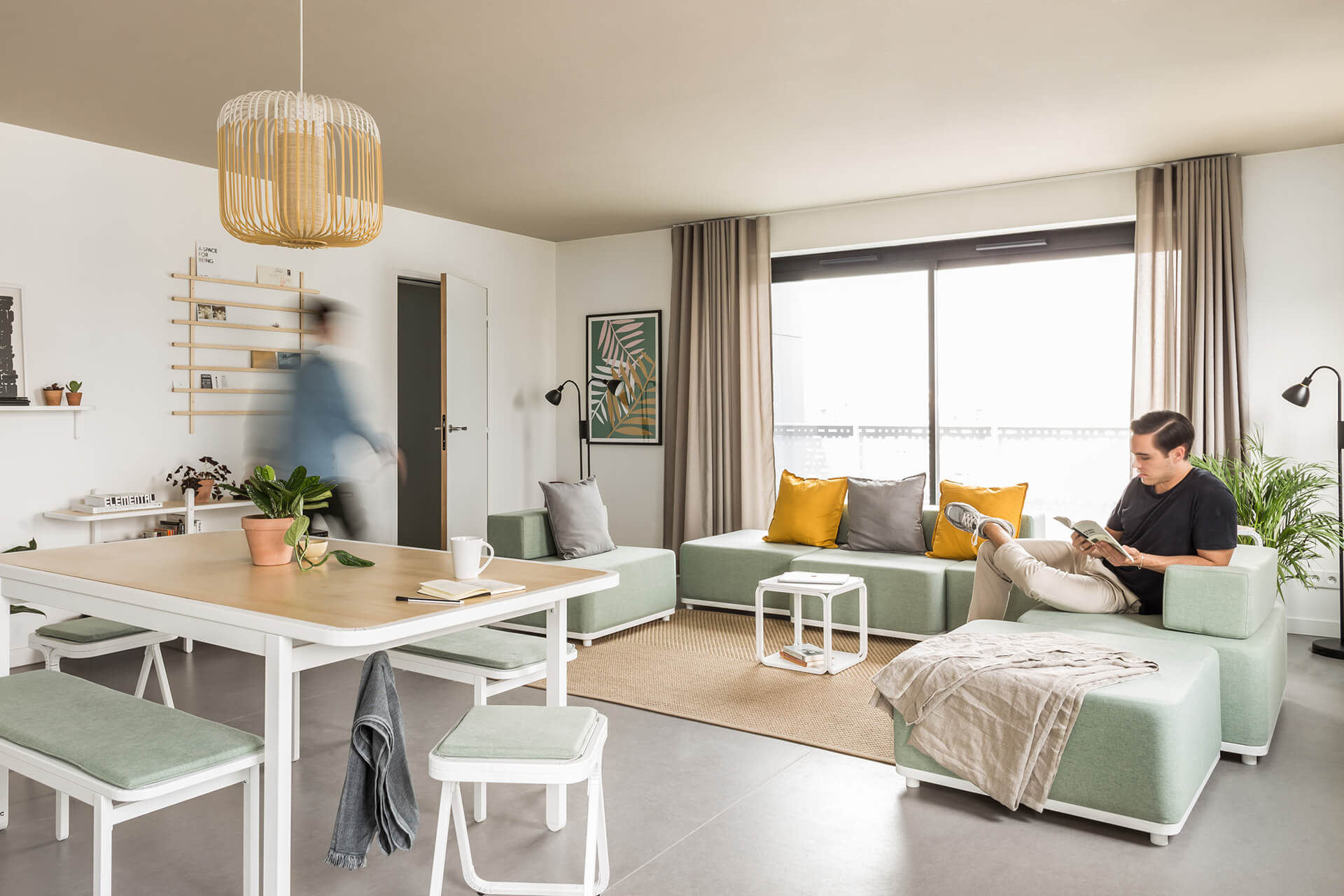 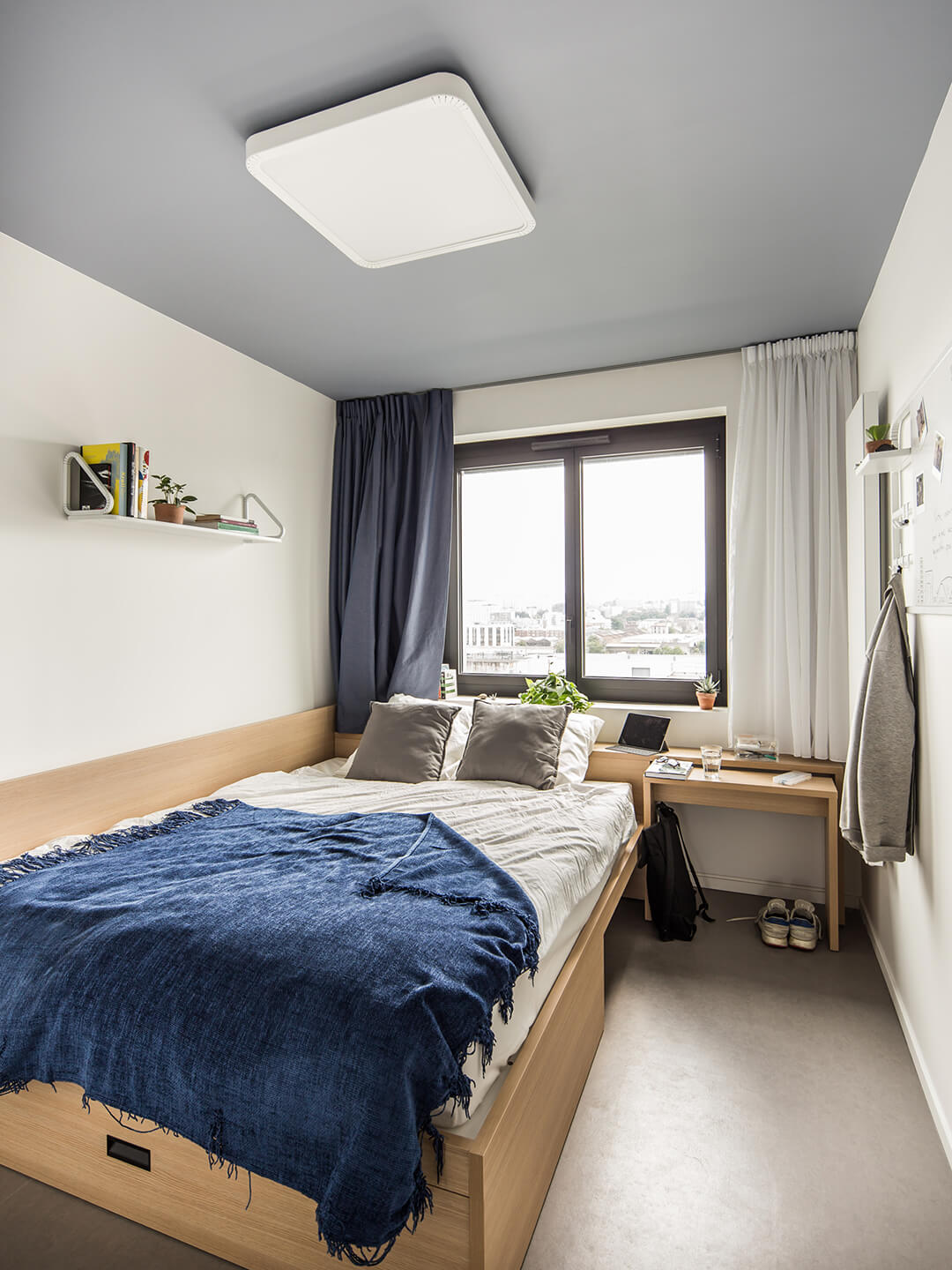 Thiemann concurred that flexibility will play a long-term role in design as we live ‘with or without’ a virus. ‘We have to be ready for whatever will be coming in the near future,’ he said. For him, a main takeaway from the first months of the pandemic was that homes, offices, furniture – and ‘even cities’ – were unable to meet people’s needs as the pandemic unfurled globally. Van Assche agreed with this. And the post-COVID challenges that design faces, as he pointed out, are only magnified in spaces like homes for the elderly. He shared an image of a senior residence project Bureau SLA is working on in Amsterdam – started before ‘we started asking all these questions’ – to exemplify the ‘issues that we will meet sooner or later in designing living environments for everyone, like how to facilitate human connection while ensuring safe interactions'. 'Working out the practicalities involved with designing in this age ‘will give us new typologies of living, new modes of living, inside and outside.’ Van Assche mused, ‘We are not interested in solutions – we are interested in new visions of the future and new visions of living together.’

How valuable are our cities if we leave them in times of crisis?

Incorporating and embracing a green way of living remains of paramount importance, thinks Garziano. ‘I truly believe that we have to look at nature,’ he said, ‘to build up a new value system based on a respect towards our planet and our environment.’ The architect’s Amsterdam-based practice uses biophilic design principles to create spaces aimed at improving the quality of life, health and wellbeing of the inhabitants. ‘Biophilic means “love for living systems” – for other people, for flora, for fauna, for everything – and that’s what we’ve been missing so far.’ During the quarantine period, Yuji Maeno shared that he and Crawford worked to develop five points that will be interesting to pursue post-pandemic. One is ‘liquid territory’, a concept that focuses on using space in a fluid way. ‘We can echo what Giacomo is saying,’ Crawford said, ‘we believe the future of design is integrated with nature and city with rural and urban. The idea of “liquid territory” really plays to that. It’s imagining that we might live in a future where we spend some time in the city and some time in rural areas, where we’re no longer confined to one or the other thanks to increasing modes of transport and the availability of remote work.’ She pointed out that one out of four people in Paris left the city to go to other places in France: ‘We saw a similar “urban exodus” in many major cities around the world. It begs the question: how valuable are our cities if we leave them in times of crisis, and how might we facilitate communication between rural and urban without it being so polarized?’

The conversation led to pressing question instigated by van Assche: does this mark the end of modernism? ‘The idea that we should have separate spaces for separate functions is of course a very modernistic idea – this is the place where I work, where I recreate, where I live. You can see this reflected in our zoning plans. Our zoning plans are actually really stupid – they’re maps with one square coloured blue, one yellow, one red, one green, [which decide where different activities can take place]. [They reflect] this sort of naïve notion of dividing life in functions. But what we see now is that our lives are much more subtle and diverse.’ Acknowledging how our activities have become increasingly integrated, he explained, ‘We should see the end of modernism as an opportunity to make life more interesting.’

Thiemann closed the talk by asking how cities should adapt to become more liveable and affordable. ‘We can rethink cities by breaking a conceptual mistake that we make,’ reflected Yuji Maeno. ‘Somehow we believe that natural is a synonym for original. We think artificial is to be opposed to the natural. I think if we can break that triangle, we might be able to think about our cities differently – to see nature not as décor, but something that is part of us,’ an opinion Garziano had also shared earlier on. ‘The future is shared,’ added Crawford, ‘The future of cities is shared – this is how we help with the affordability challenge, it’s how we improve the quality of life of and give access to a higher quality of space for people who, without sharing, wouldn’t have the means.’

Read about more past and upcoming #FrameLive events here.