In Iceland, the singer of Sigur Rós might have just cracked the luxury retail code

When Jónsi Birgisson needed a name for his freshly formed band, he looked to his newborn sister, Sigurrós. When neither English nor Icelandic could keep up with the intricacies of Sigur Rós’ sprawling music, Birgisson practically created a whole new language, called hopelandic. When the band moved its recording studio from an old fisherman’s house, Jónsi and Sigurrós — and Lilja and Inga, their two sisters — filled it with the objects they made and practically created a whole new retail category: the deeply personal and intuitively unconstrained luxury flagship.

That is: if high-end manufacturers want to see what an optimal retail experience looks like, they should probably be heading up to downtown Reykjavik.

Fischer opened in December of 2017 as a repository of the siblings’ hobbies and interests. Lilja is a photographer and visual artist who creates haunting still-life pieces featuring flowers and herbs in the last minutes of their upright existence. Inga is a designer, in charge of the overall packaging and loose items such as a poster detailing old wives’ tales for natural remedies — dog’s milk, ram’s bile and the touch of a corpse’s back before being buried are some of the ingredients included in the recipes. Sigurrós creates natural cosmetics and manages the store. Throughout his tours, in the past six years Jónsi has brought back home enough odd scents to fill out an organ — which he actually did. The first fragrance he formally put together? A tribute to the salty, woody, wet-dirt smell his father carried home every day as he returned from his workshop. The perfume, called No. 54, is one of Fischer’s bestsellers. Its notes punch hard with the smell of salt and dirty leather and vetiver-ed ammonia, and I didn’t expect to like it the first five seconds I sampled it. But then, as the initial discomfort subsided, I realised I would happily trade in my Byredos and Lola James Harpers and Coqui Coquis for whatever this was. 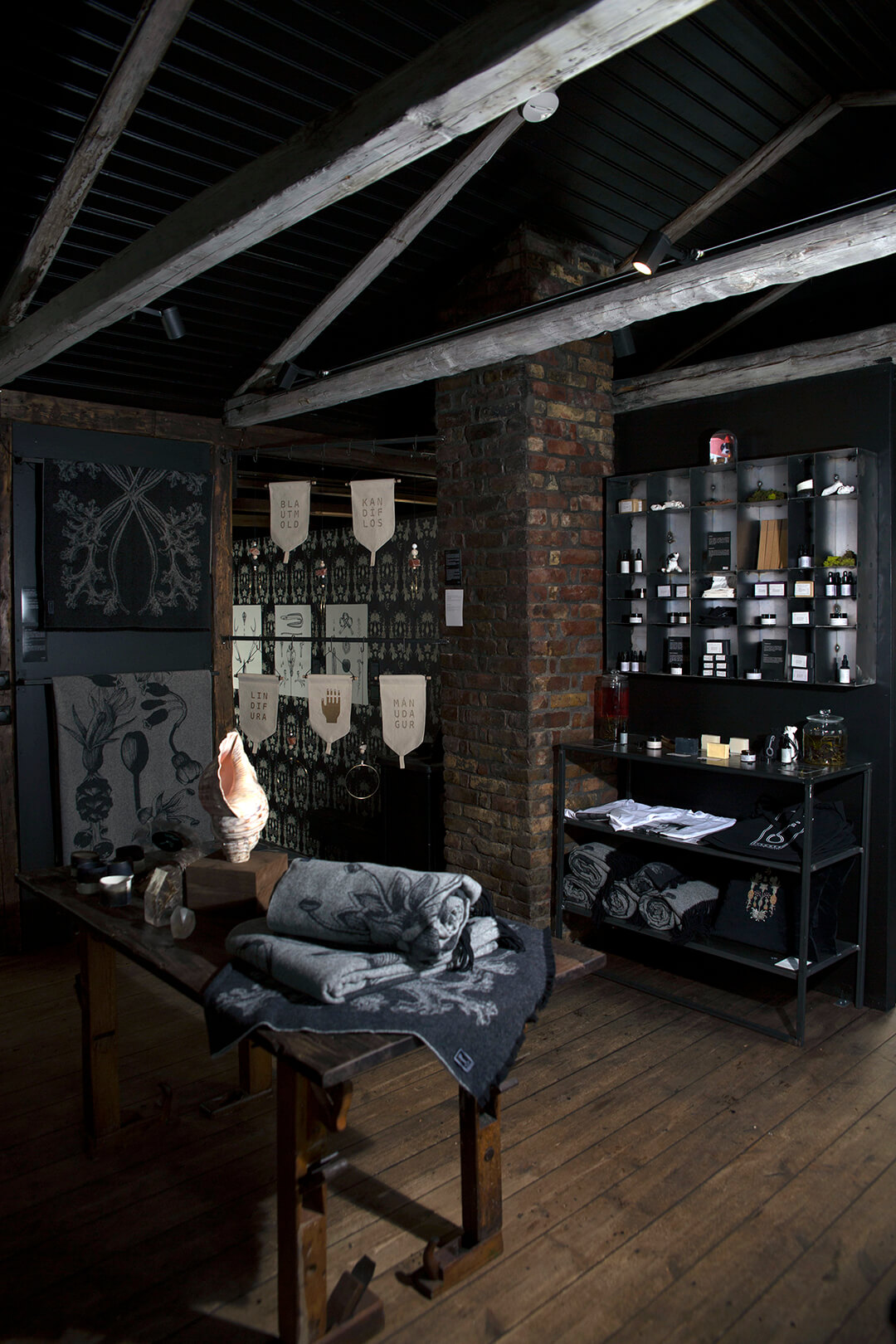 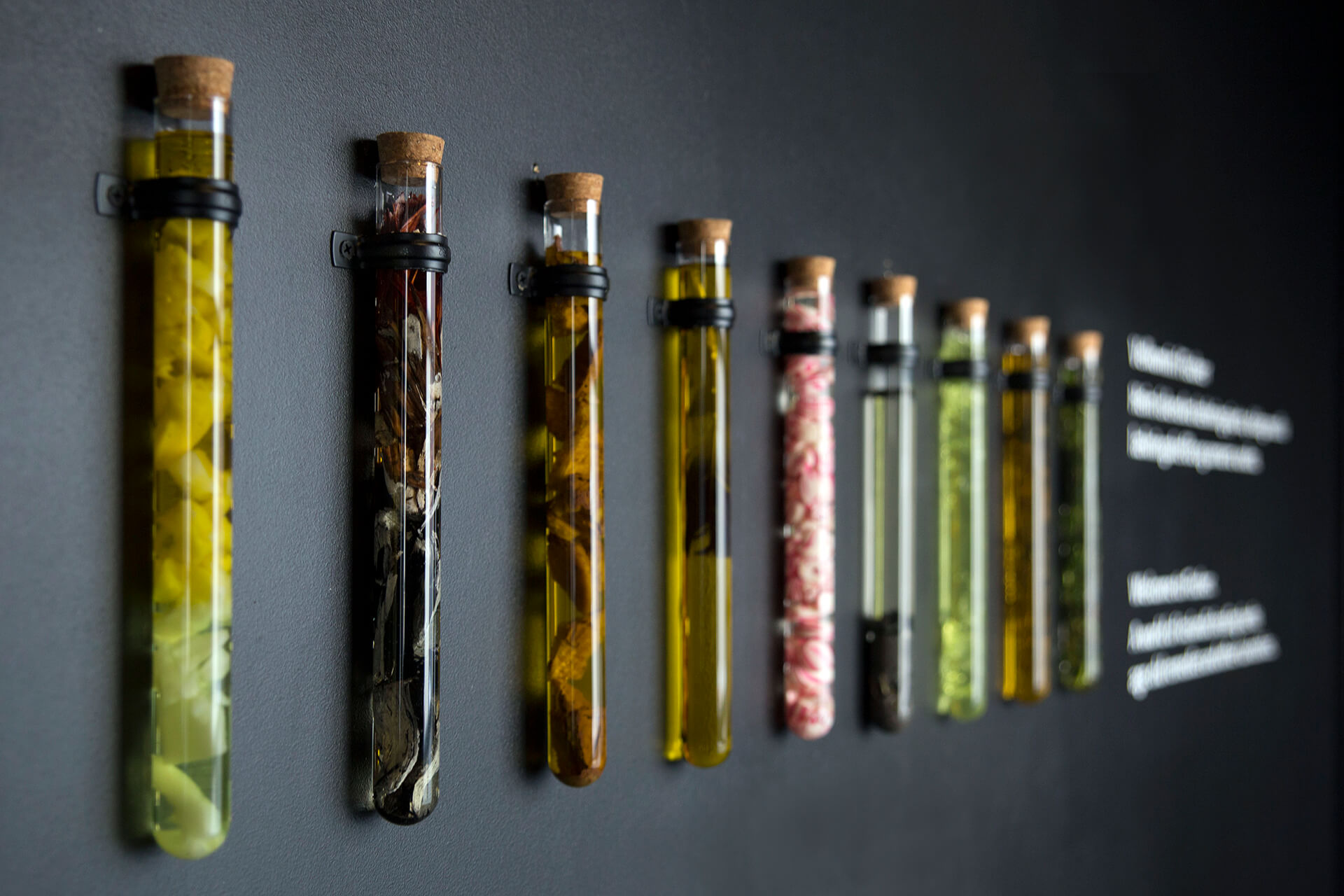 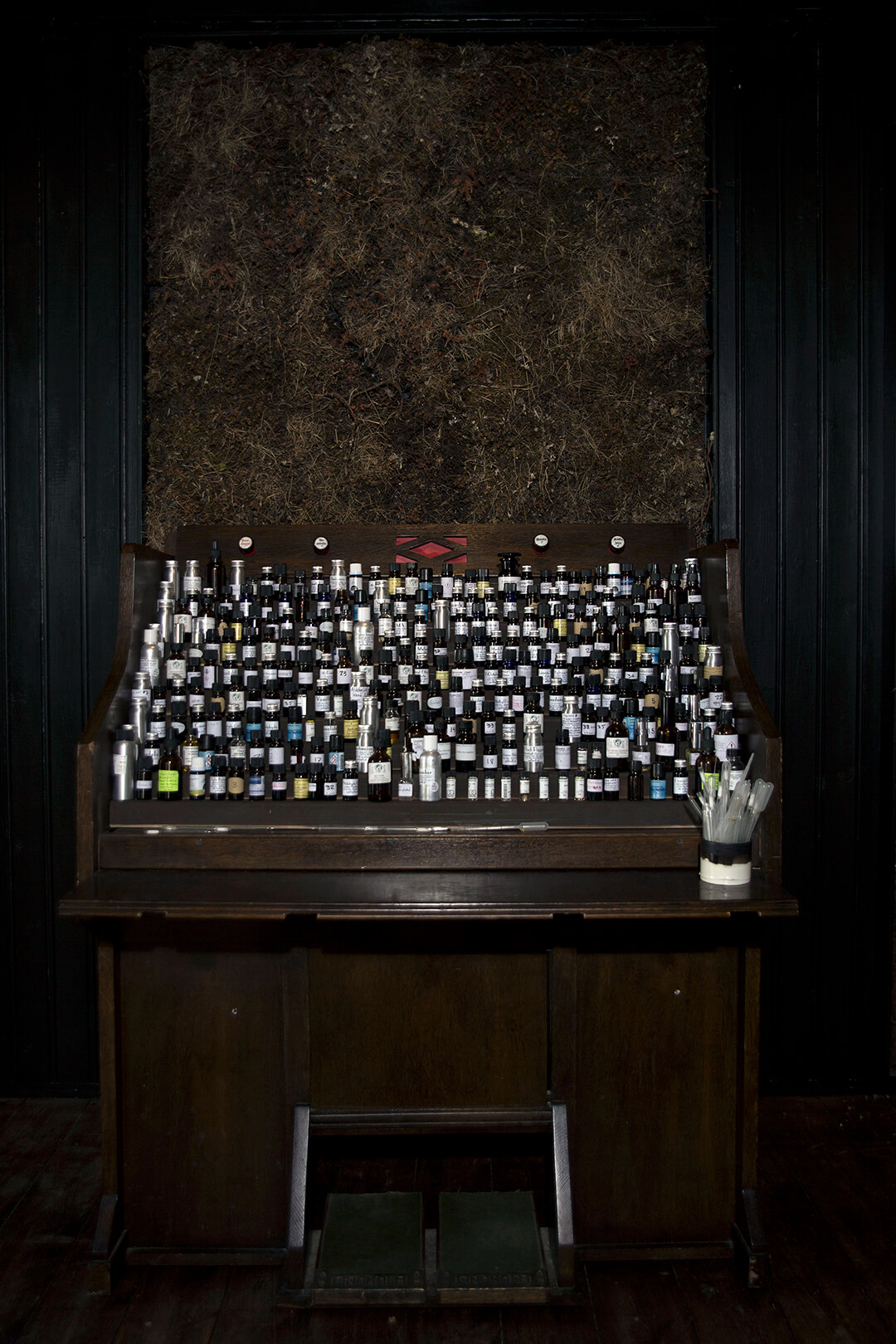 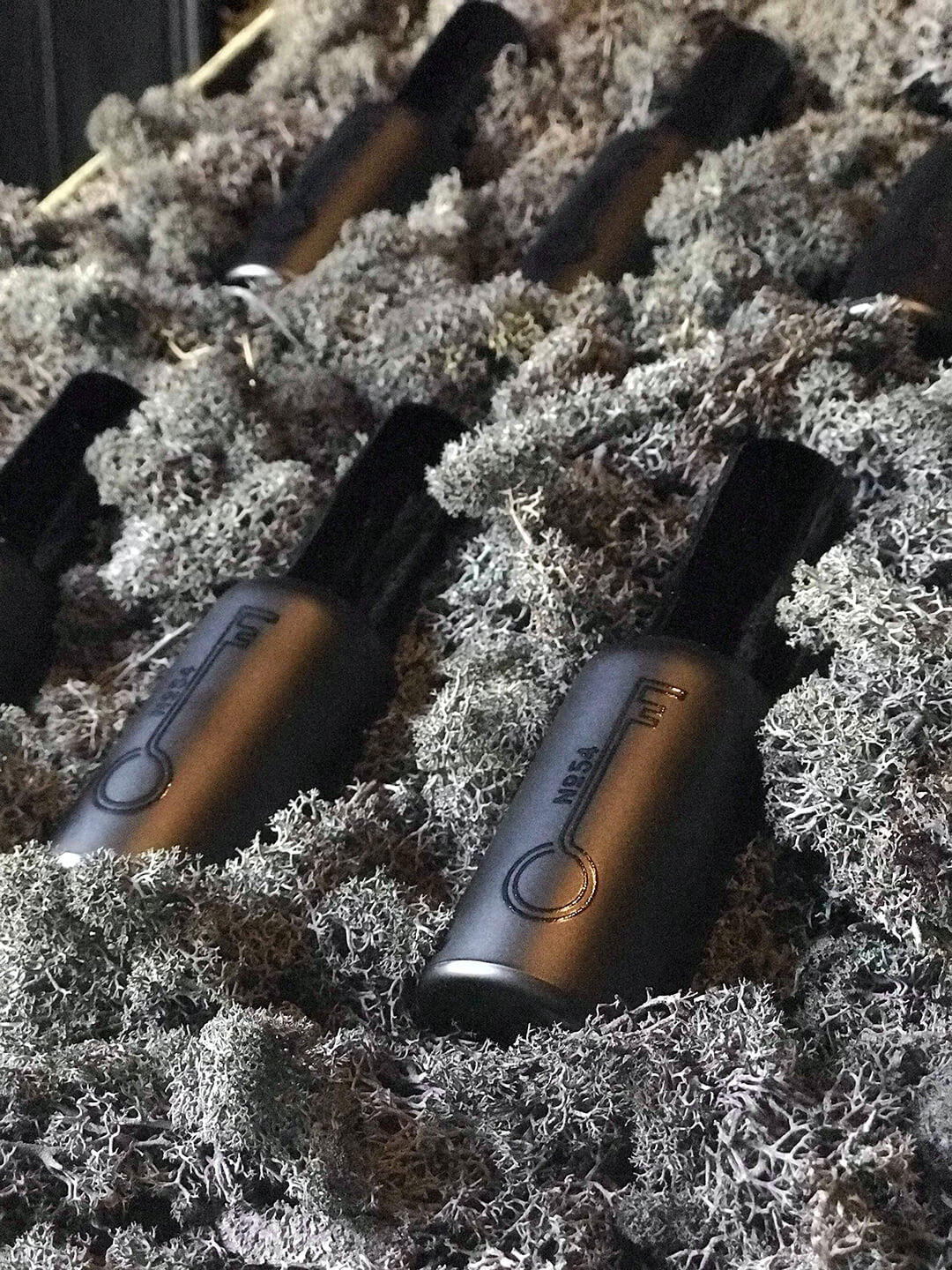 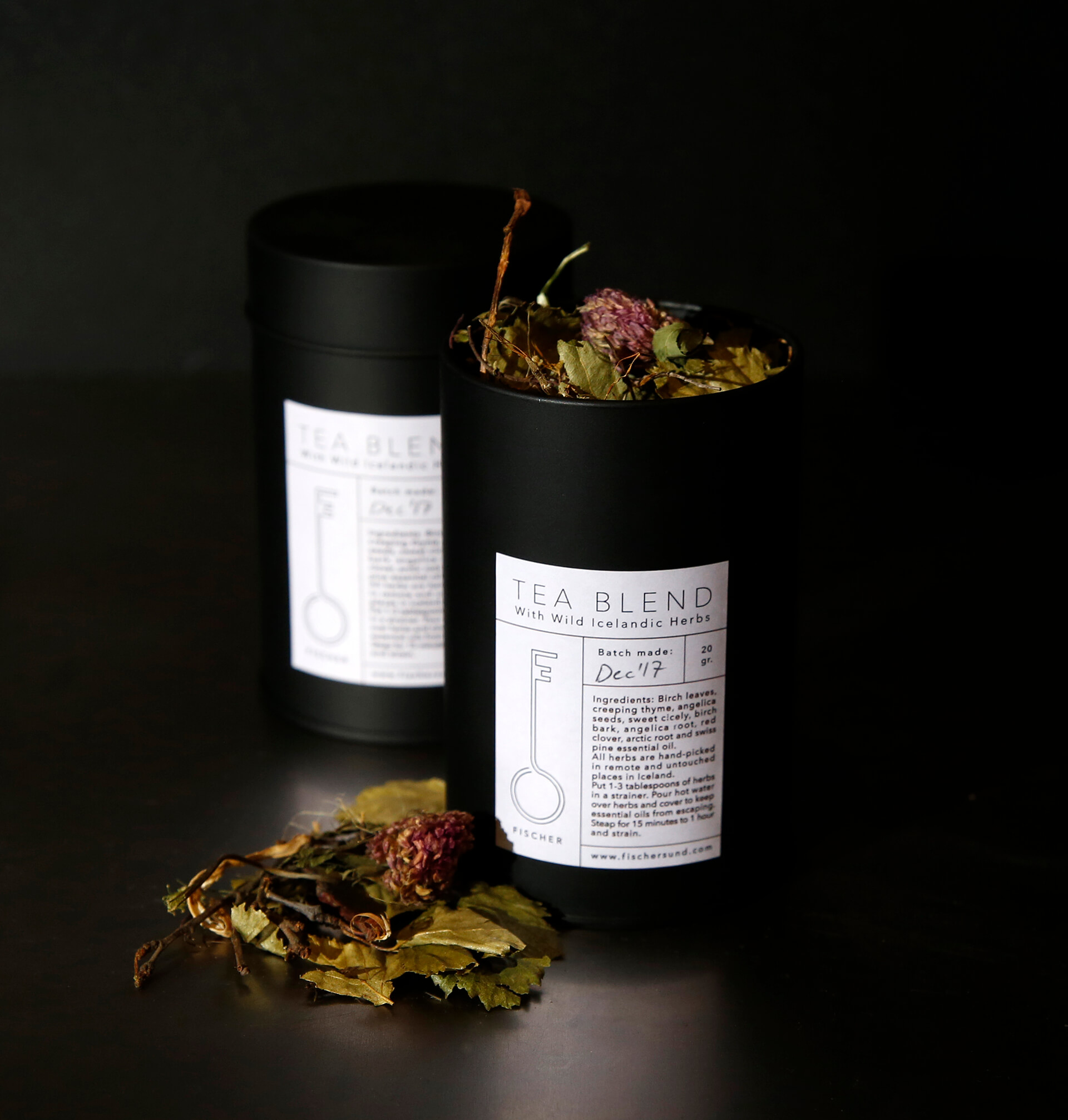 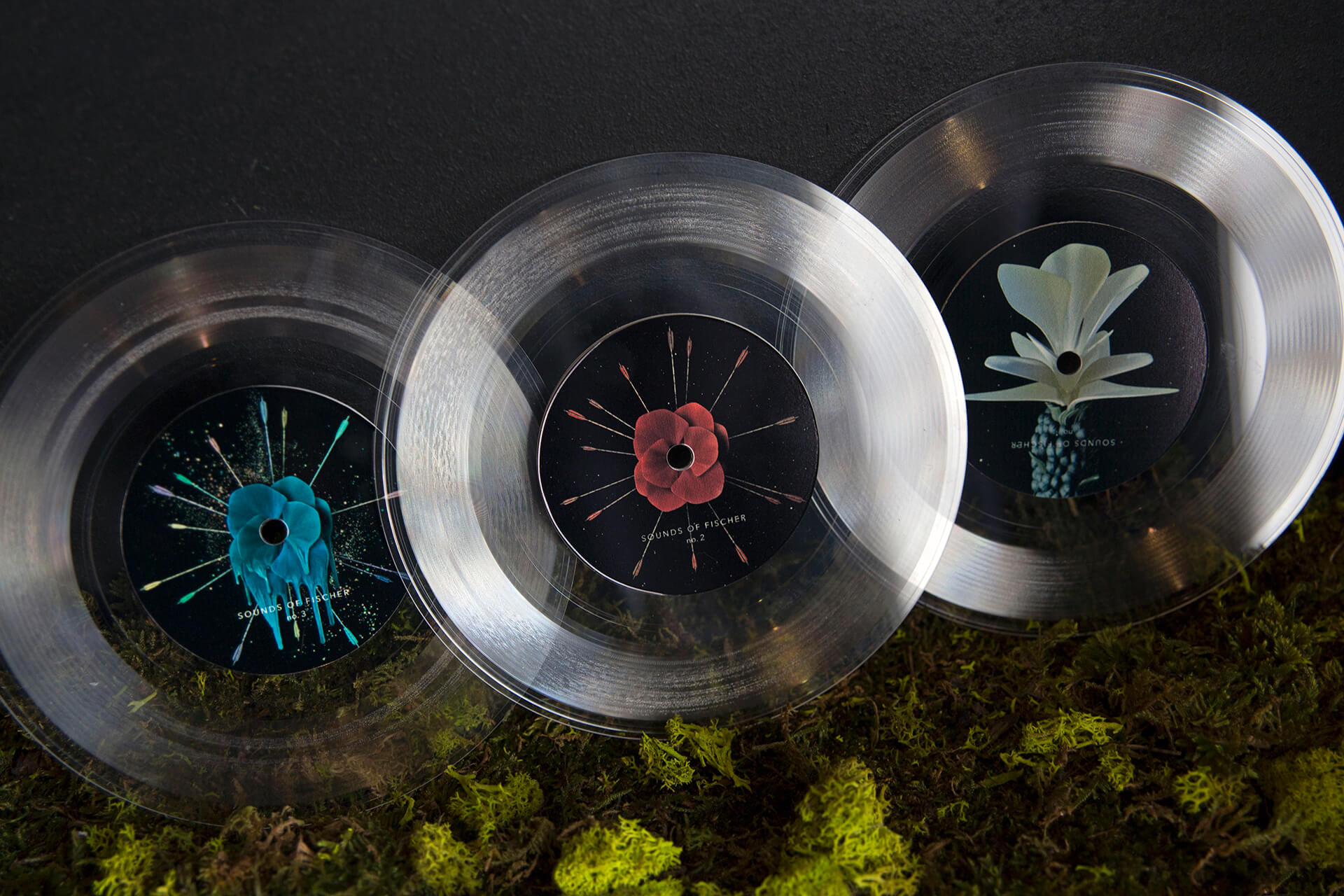 Inside the Fischer store

That’s because Fischer isn’t an echo chamber that validates and serves what its customers already like, with nearly algorithmic precision — like many luxury retailers seem to be doing today. No. Instead, the son and daughters of Birgir are masters at pushing visitors outside the borders of their own taste, to save them from their judgmental selves and help them relax and accept new favourites.

Take, for example, liquorice. I would rather eat a kilo of coriander than a pinch of liquorice — and I absolutely hate coriander. During the most recent edition of DesignMarch, the siblings decided to highlight the sensory beauty of everyday items, from plastic bags to crackers, capturing them inside test tubes and glass bells. The most overpowering one? Liquorice, also found in the formula for No. 54. After 10 minutes of being exposed to it all over the store, I gave in to its sweet spice and even considered using it as a home fragrance.

Or the tea blend. The leaves and stems and tree trimmings, hand-picked by a savvy woman from the highlands people jokingly refer to as a ‘witch from the North,’ look like the bits and pieces that get stuck under the crannies of your boots after a walk in the park. After suspending my initial reticence, I was happy to discover the wild mix tasted of berries and something akin to rosemary.

Or the Forest Shower, a DesignMarch installation in the basement, conceived by Nordic Angan. The two designers behind the fragrance brand, Sonja Bent and Elín Hrund, received a governmental grant to collect a scent library of Icelandic forest herbs. When they shipped their samples to a Canadian phytochemical lab, the test results pointed to varieties and concentrations not found elsewhere in the world, even on arctic climates — blame it on the soil composition and the fierce activity of their volcanic land. That led the duo to liquify herbs by way of CO2 distillation — and the subsequent creation of the essential oils, home scents and soap bars of Nordic Angan. As I stepped under the strong, green mist of the Forest Shower, I felt my respiratory system shut down — the first few seconds hit me like dog’s milk and ram’s bile. And then, all of a sudden it smelled the way Michel Gondry’s music video for Jóga looks. I couldn’t recognise a single scent — was it fir or thyme or wet dirt — but I stood there, gleefully surrounded by the unknown, for nearly half a minute. Bent and Hrund had certainly helped me relax and accept new favourites. 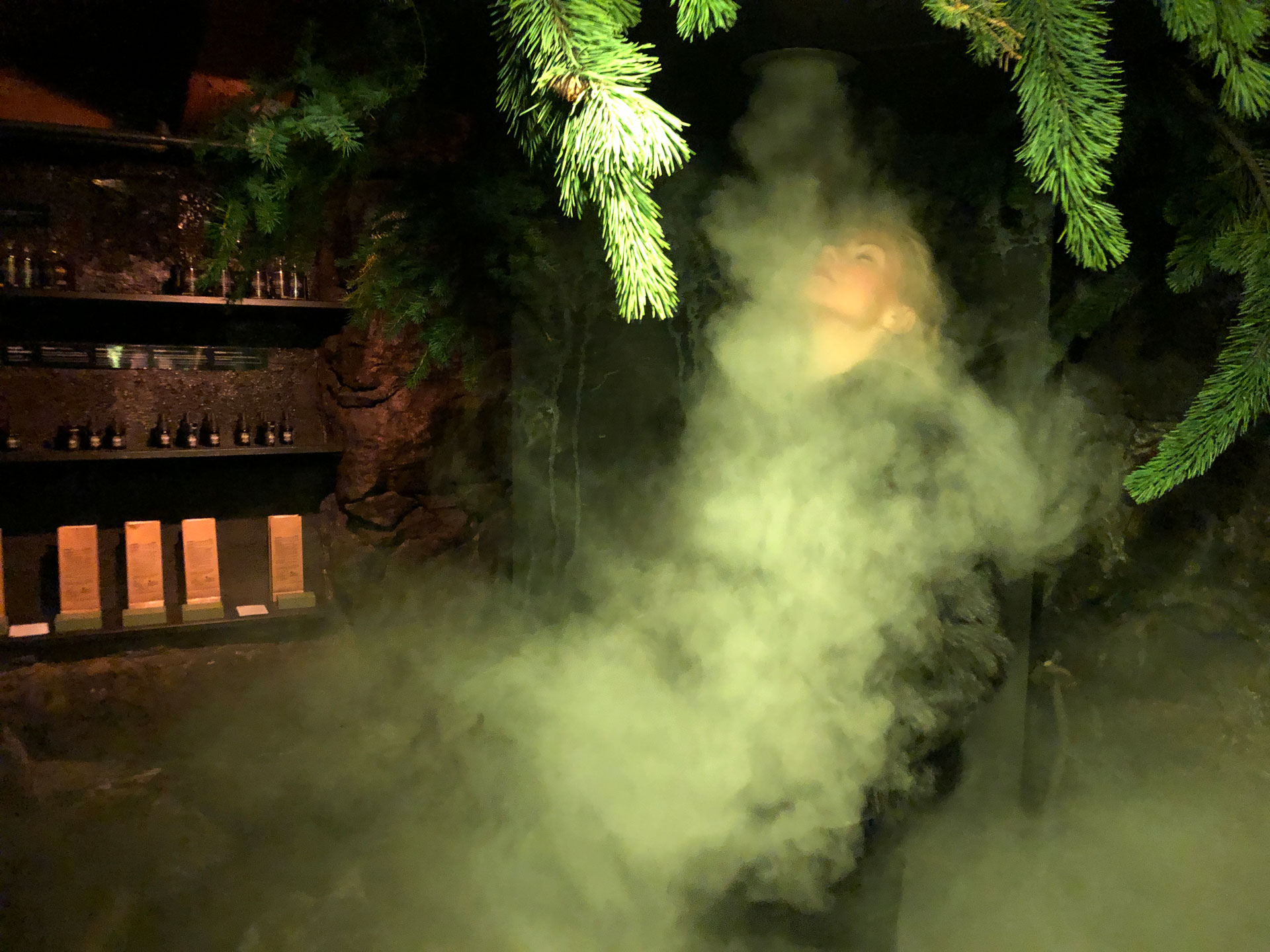 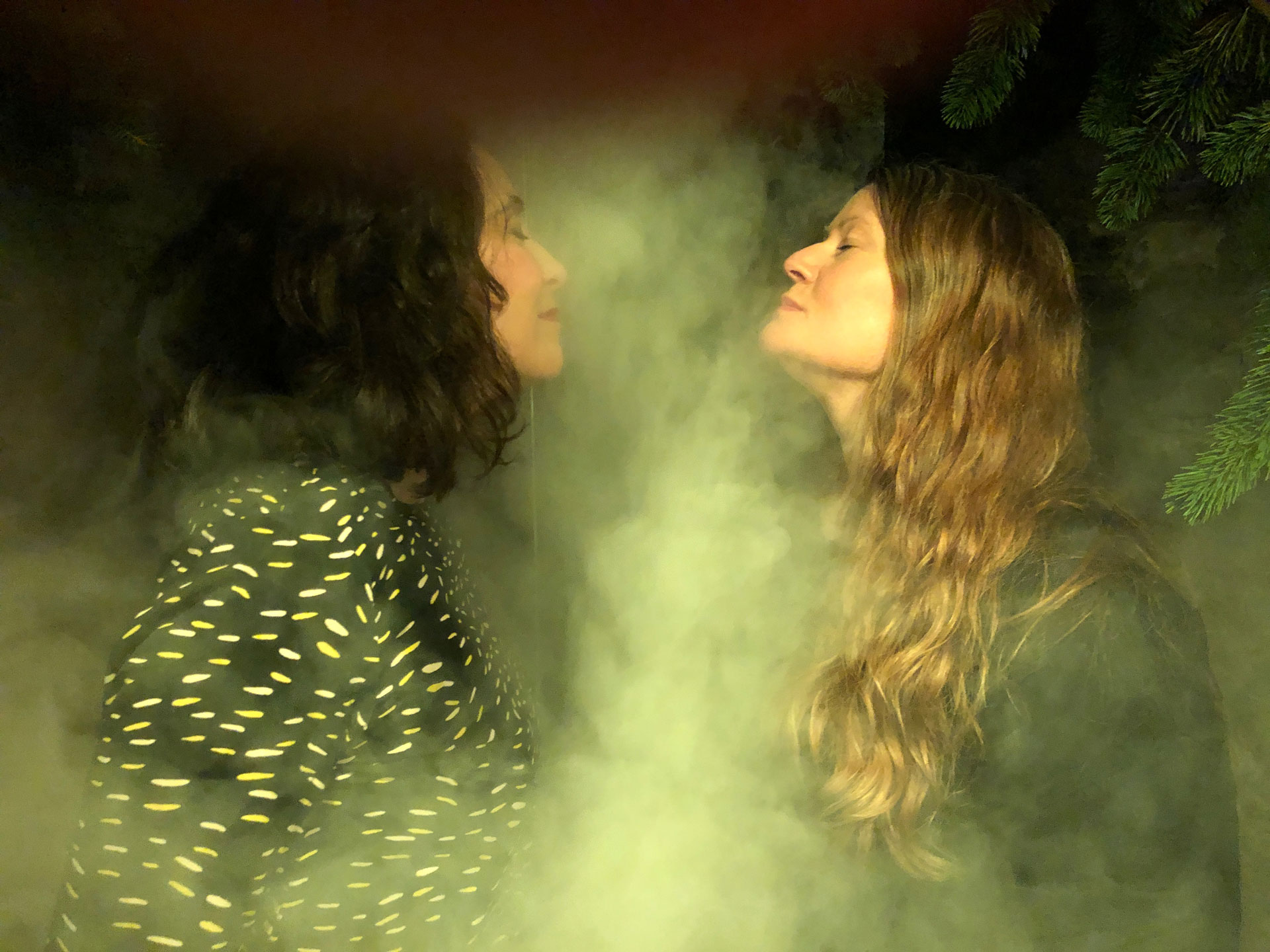 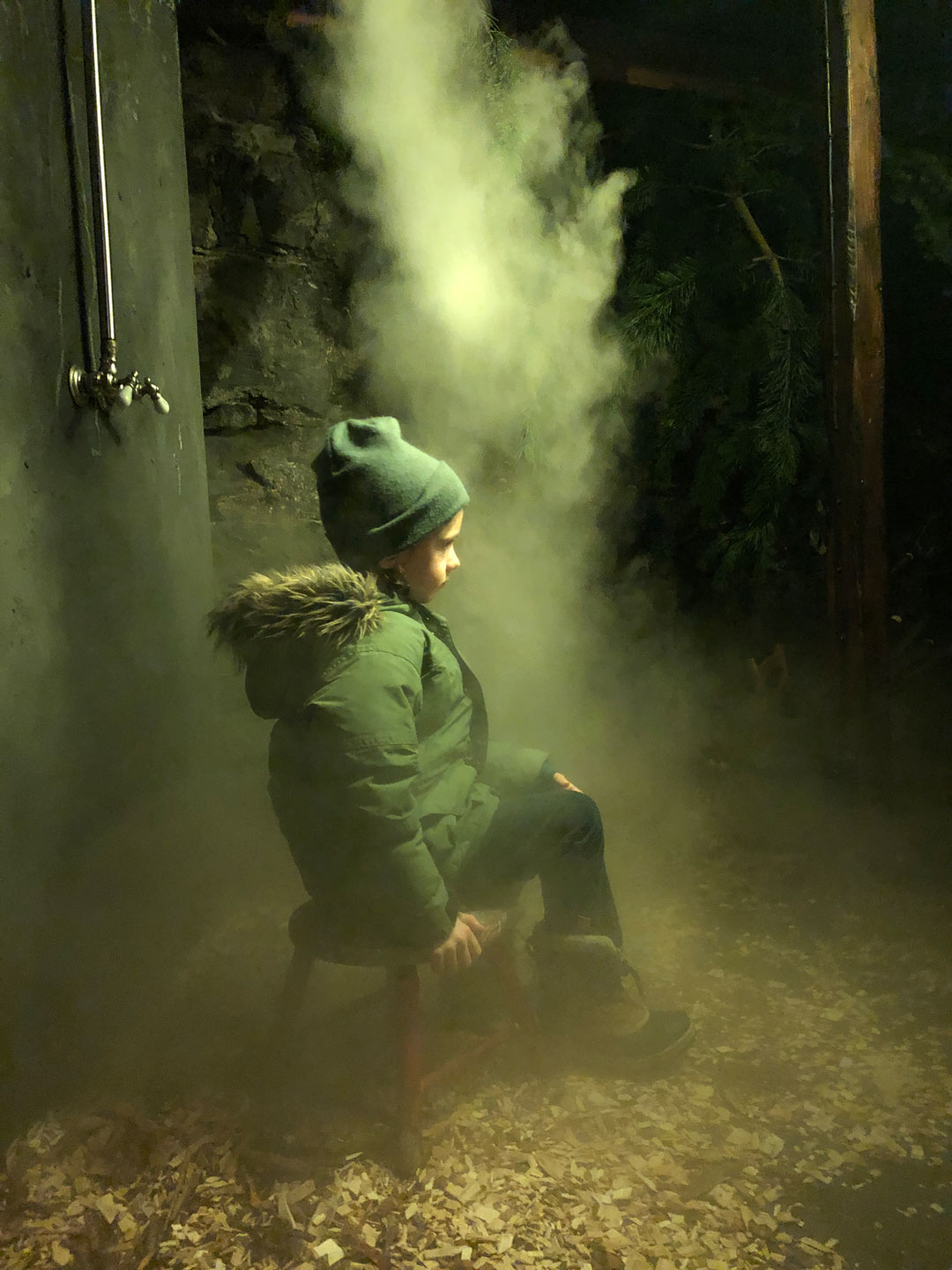 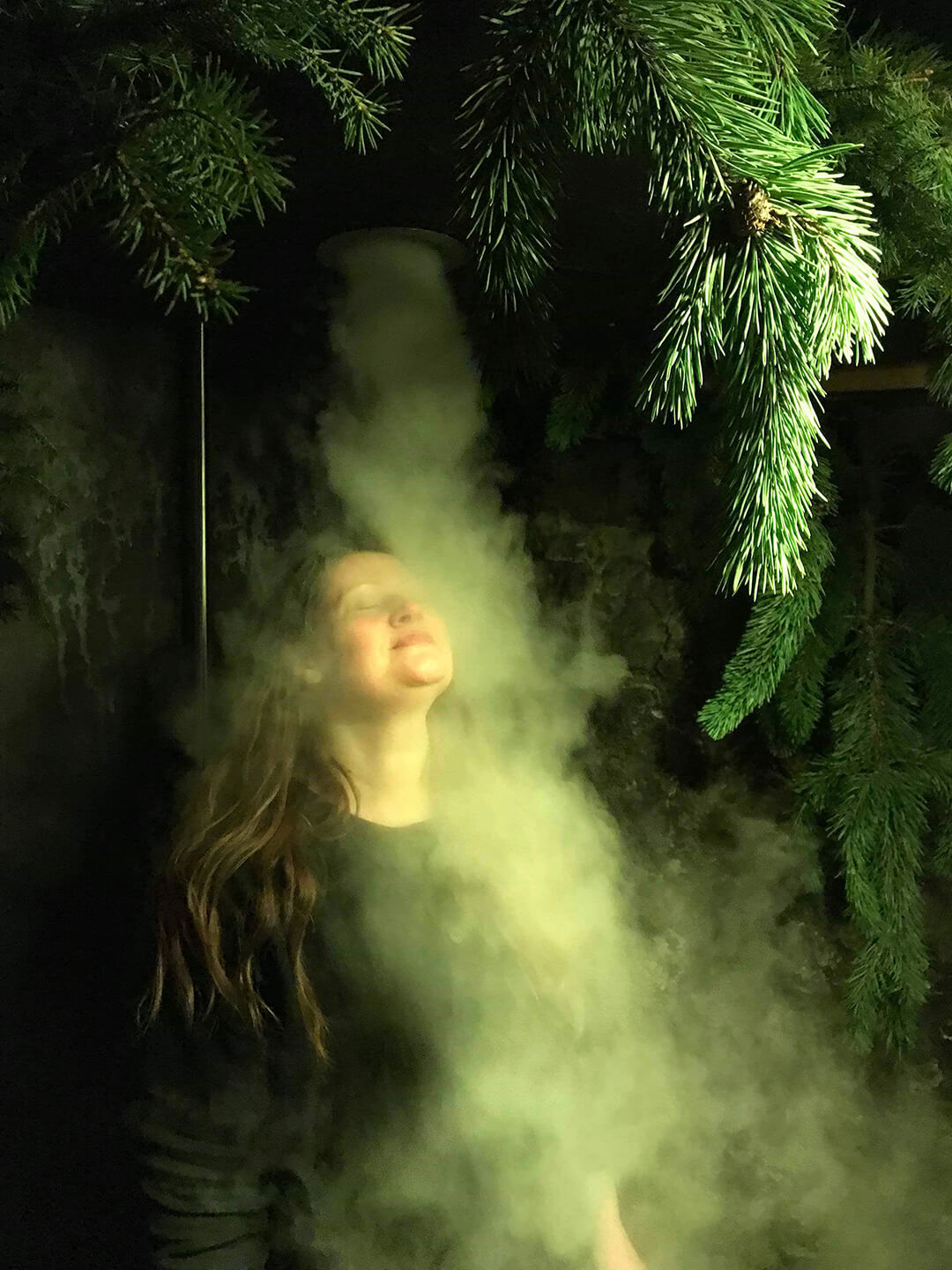 Nordic Angan's Forest Shower installation, located in the basement of Fischer during this year's DesignMarch

The only link between the majority of the products on display at Fischer is, quite simply, whatever peaked the siblings’ interest on a given day. The moss on select walls is a remainder of the natural, DIY sound insulation used in the space's previous life as a recording studio. The family dog, Atlas, needed a shampoo, so Sigurrós concocted one that is now on sale. Instead of a carefully selected Spotify playlist, Jónsi recorded Sounds of Fischer, a series of three vinyl albums in limited editions of 100 units each, that are only played in the store — no live shows, no digital version.

Mind you, this isn’t a case of artificial scarcity, à la Supreme’s drops: the items on display are mostly made by hand, usually by one person who already has another primary profession. They simply cannot keep up with demand, and wouldn’t have it any other way. They’re not interested in online distribution, or exporting — Iceland’s robust tourist flow and a high-income domestic economy keep demand healthy, with customer percentages split down the middle between locals and visitors. The only way to buy these products is by stepping inside the store. What better stamp of approval for the discerning customer who yearns for non-manufactured exclusivity and a verifiable narrative?

The store is a feast for every sense — including common sense

What Fischer offers is a window to what luxury looked like five generations ago, before the age of fashion conglomerates. It is a retail greenhouse where every single factor, from product conception to the intimacy of the final sales pitch, aligns to provide an experience that doesn’t feel like it was convened inside the walls of a marketing office. The store is a feast for every sense — including common sense. Think of the over-branding that is currently taking place in today’s retail landscape. When, several years ago, I gave my online input on personal skincare needs to direct what would ultimately become Glossier’s first product, the relatively democratic process sounded refreshing, novel, nuanced. Here’s a brand listening to me! This much-mimicked approach has lead to the current echo-chambering of retail, with many designers deferring their interests to that which already interests their target consumer. But that means the pendulum is swinging and the time is ripe for surprises, for the punch of the unexpected.

So keep this in mind: large operations would benefit from opening Fischer-like retail labs in one-off locations, letting smaller creative teams do whatever strikes their fancy. It could certainly help both consumers and brands relax and find new favourites.

This is the final piece in our three-part series covering this year’s DesignMarch festival. For more examples of what Icelanders do with their serendipitous lack of design constraints, read this list of lessons learned; our roundup of favourite projects from local creatives is here.