Light Therapy: How light is working to change our mood

The future as imagined in early science fiction was a world of flying cars designed to combat the benign reality of traffic, while an animated robot boiled the perfect egg. As technology sheds the kitsch associations of narrative futurism to confront the concerns of contemporary life, researchers report a desire for the integration of technology into solutions for wellbeing. Because Europeans purportedly spend up to 90 per cent of their lives indoors, new forms of regenerative light are being applauded for their beneficial effects on the body. Emerging from research on circadian rhythms are dynamic light installations for domestic, commercial and work spaces that target the body at a cellular level. Innovations include those that use the mood-altering, productivity-inducing power of the sun and that incorporate our biological responses to various types of light. 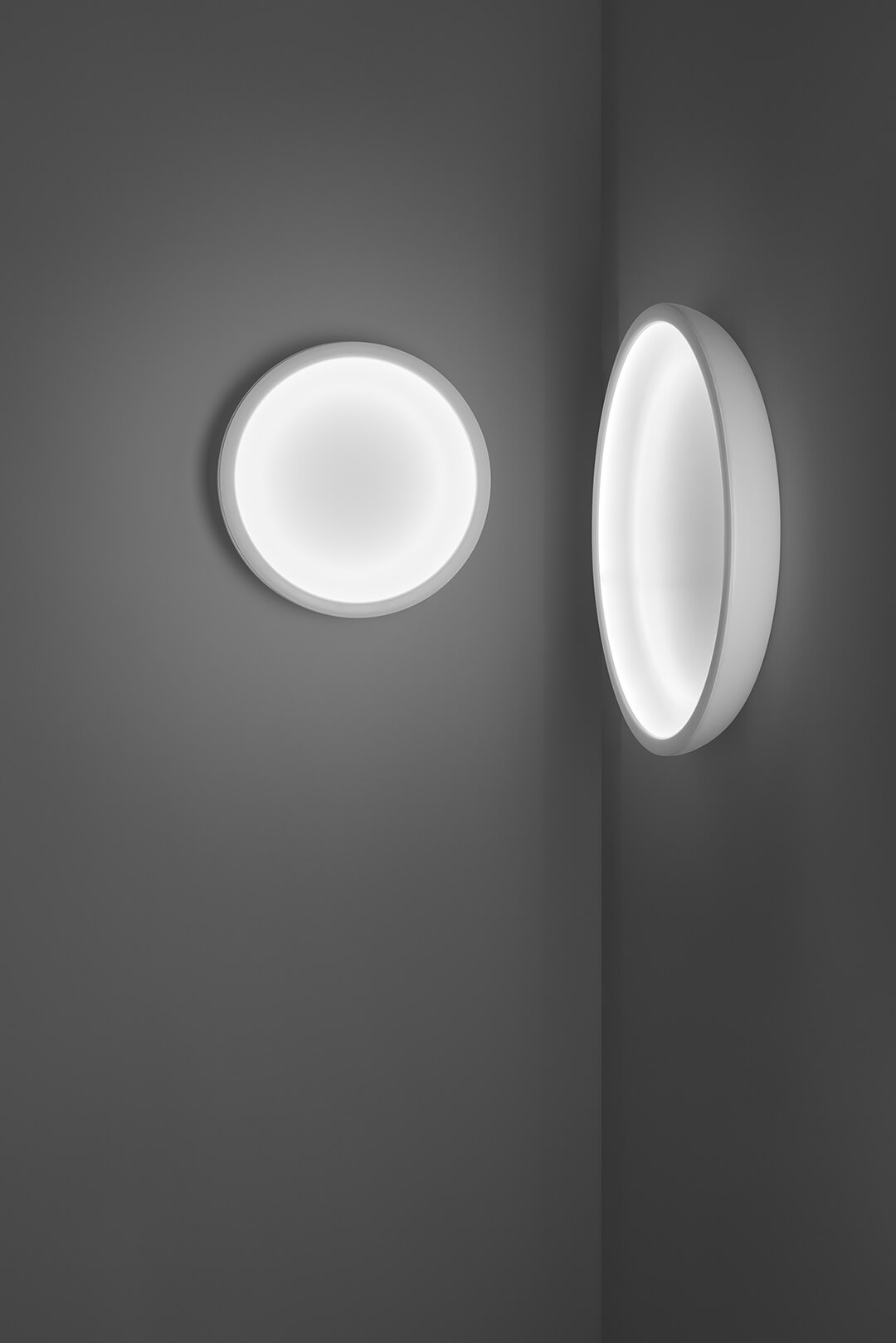 Linea Light’s Reflexio emits a diffused, glare-free glow that has a calming effect on its surroundings. The LED light source is tucked within a dome reflector that produces an even, velvety level of luminosity. 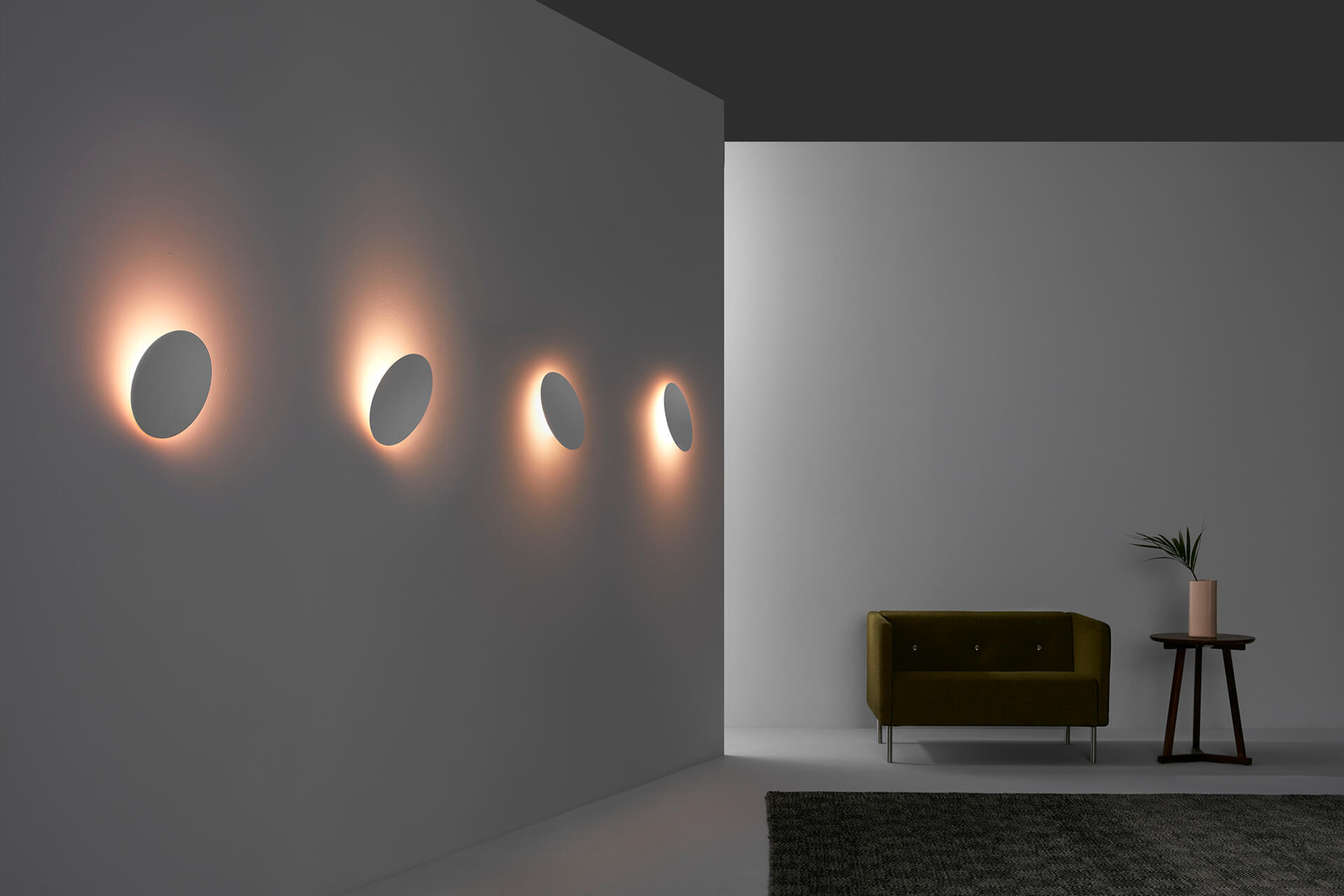 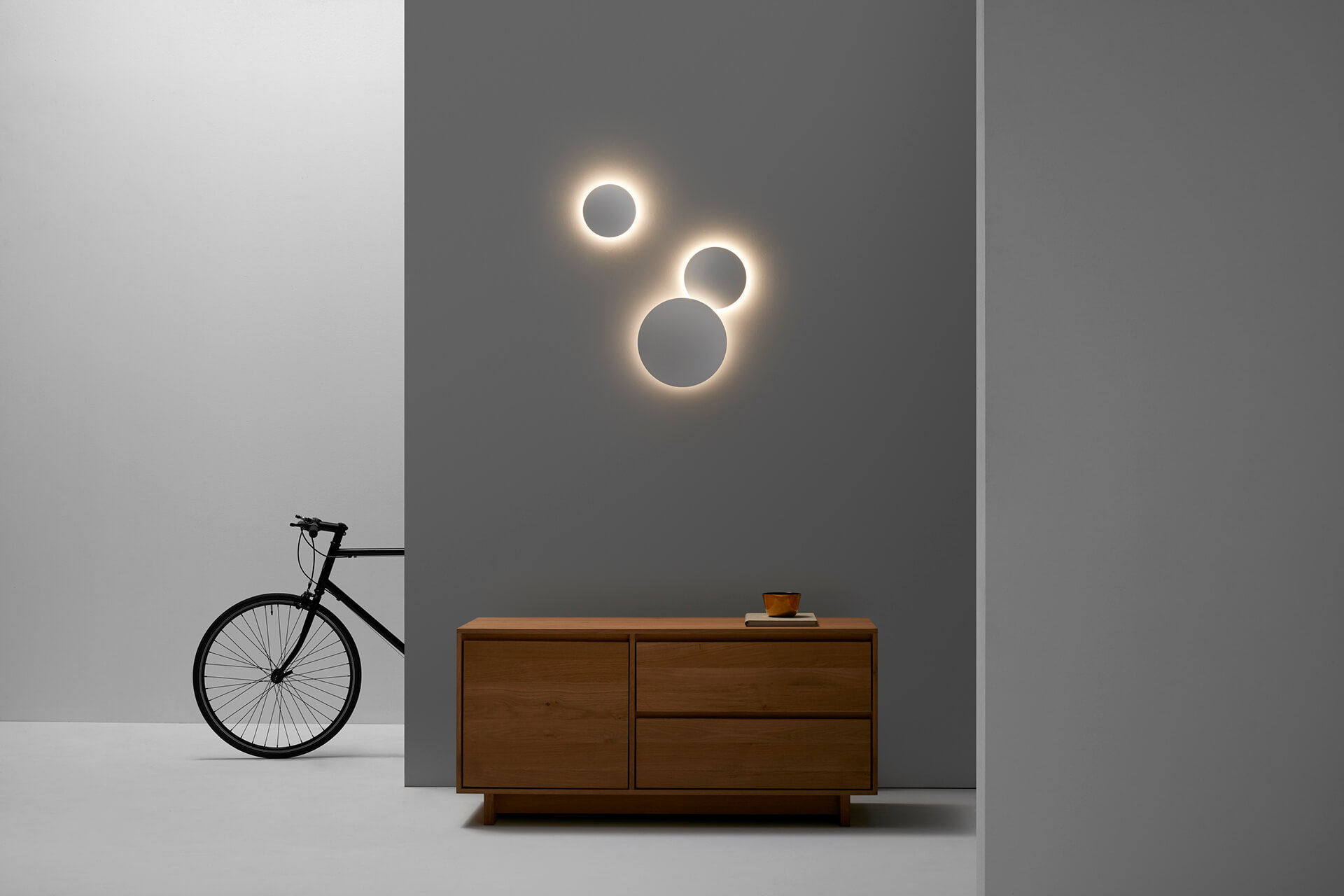 Mood – a series of luminaires by Ricard Vila for Fluvia – blurs the line between architecture and light. The circular elements are available in several sizes, in three metal finishes and in four fluorescent colours. Options include a choice of warm or cool light. 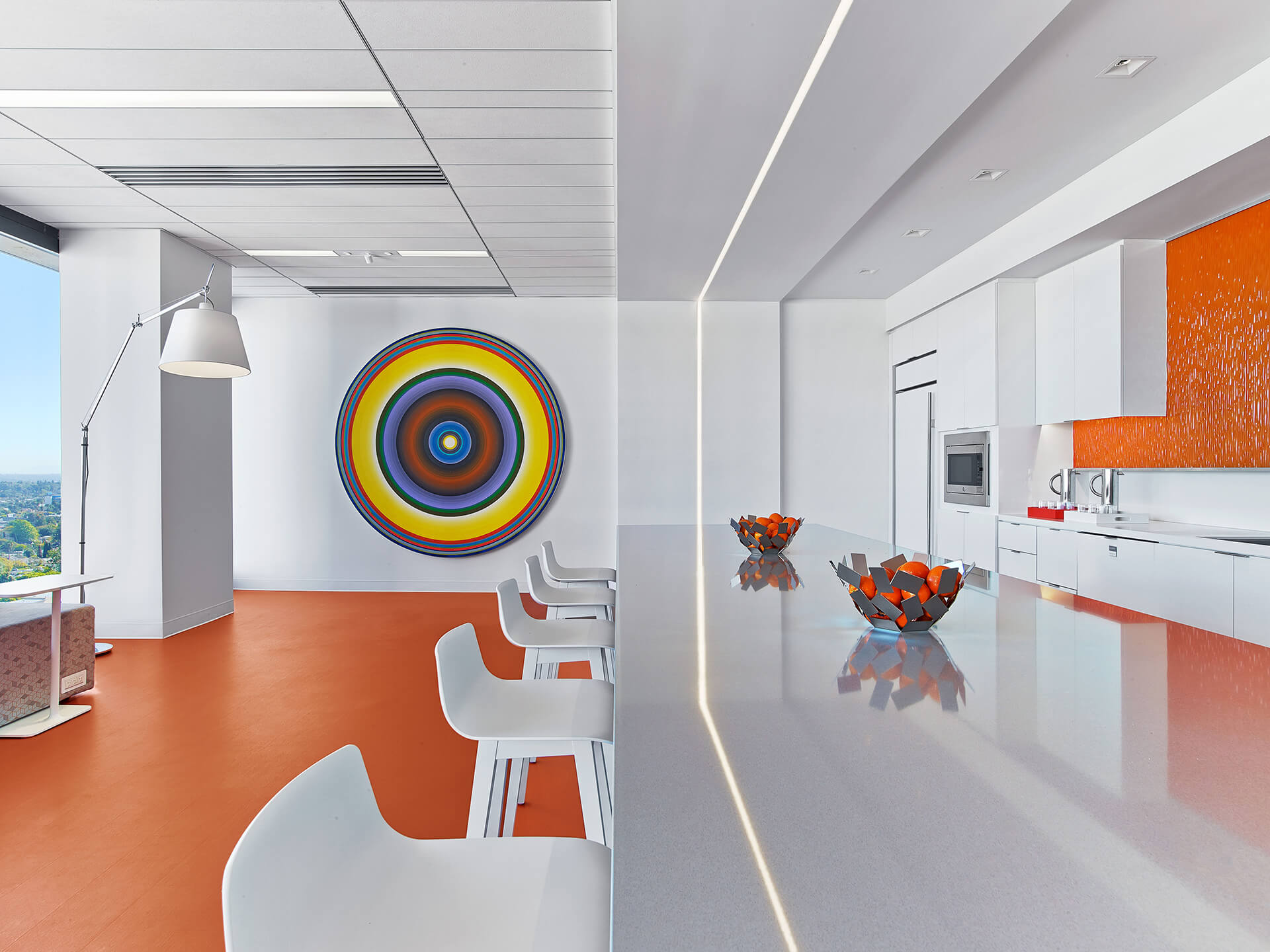 In developing a product that meets the needs of everything from fashion boutiques to workspaces, Zumtobel Group used our bodily responses to natural light as a basis for the design of Active Light, whose smart systems permit the colour temperature of natural and artificial light to be controlled throughout the day. 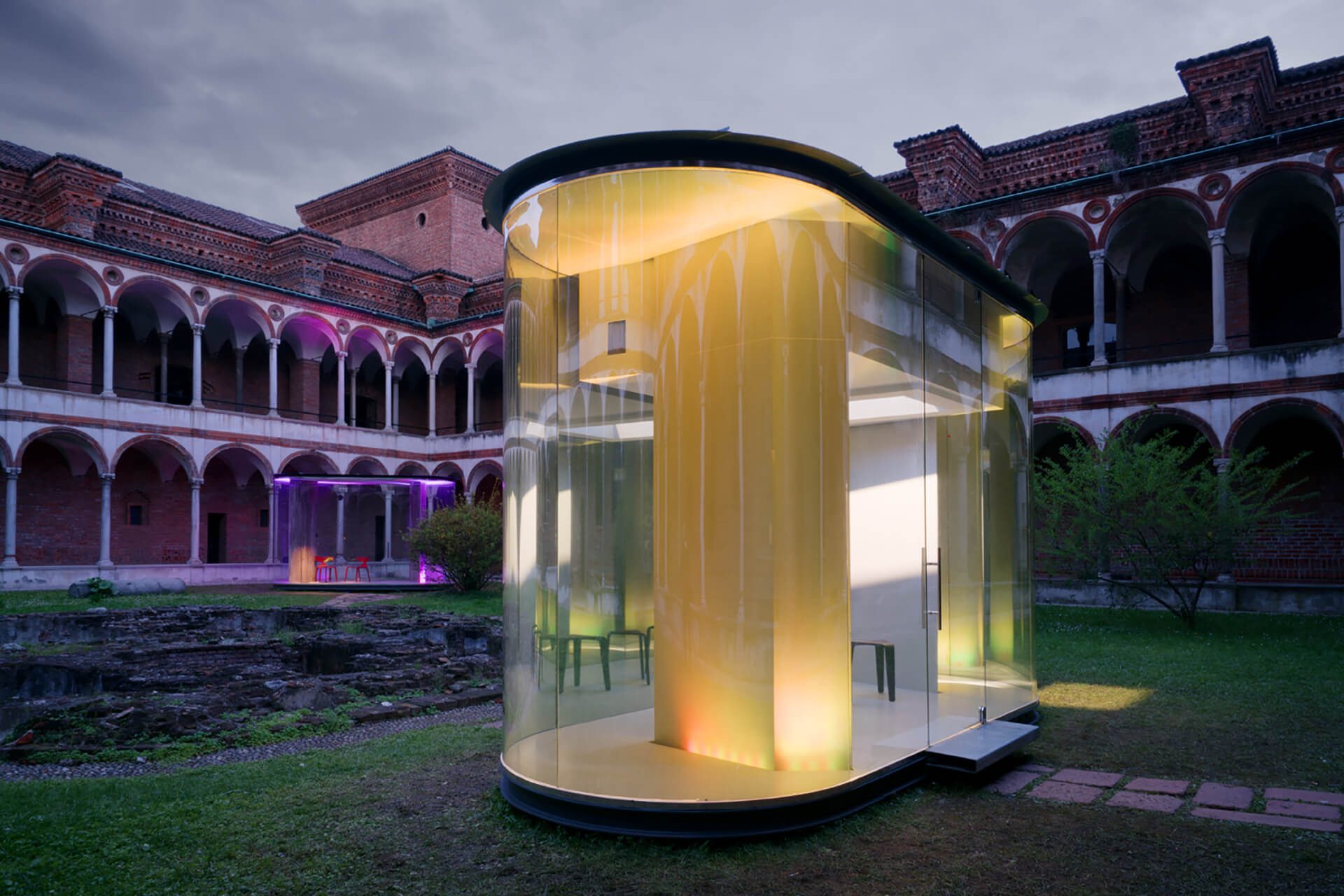 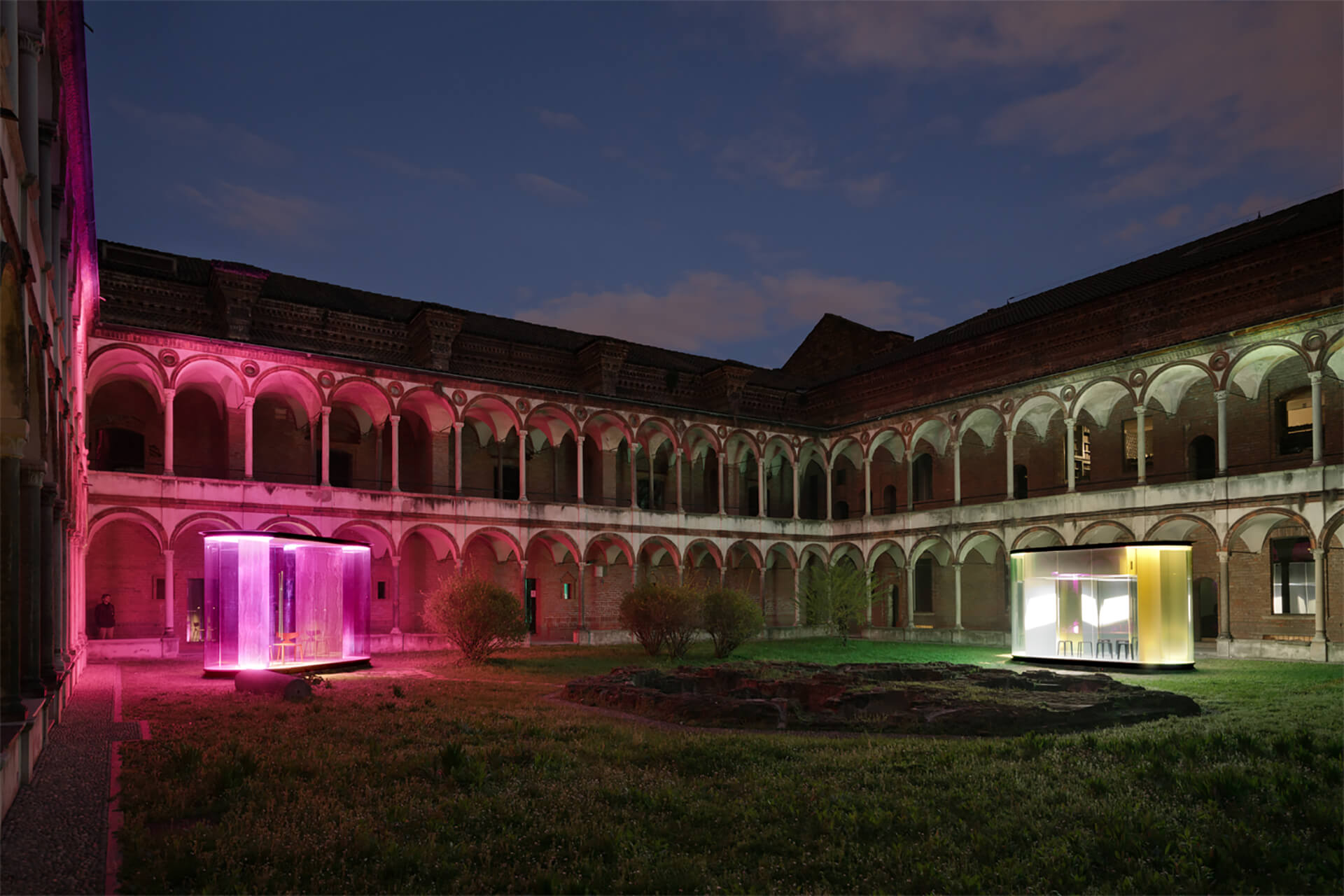 In the courtyard of Università Statale during Milan Design Week, two ‘cells’ introduced visitors to various concepts of healthcare for the future. Designed by architect Filippo Taidelli of FTA Studio and curated by Interni, the transparent units featured predictions of ‘virtual healthcare’ that will be supplemented by artificially generated sunlight. 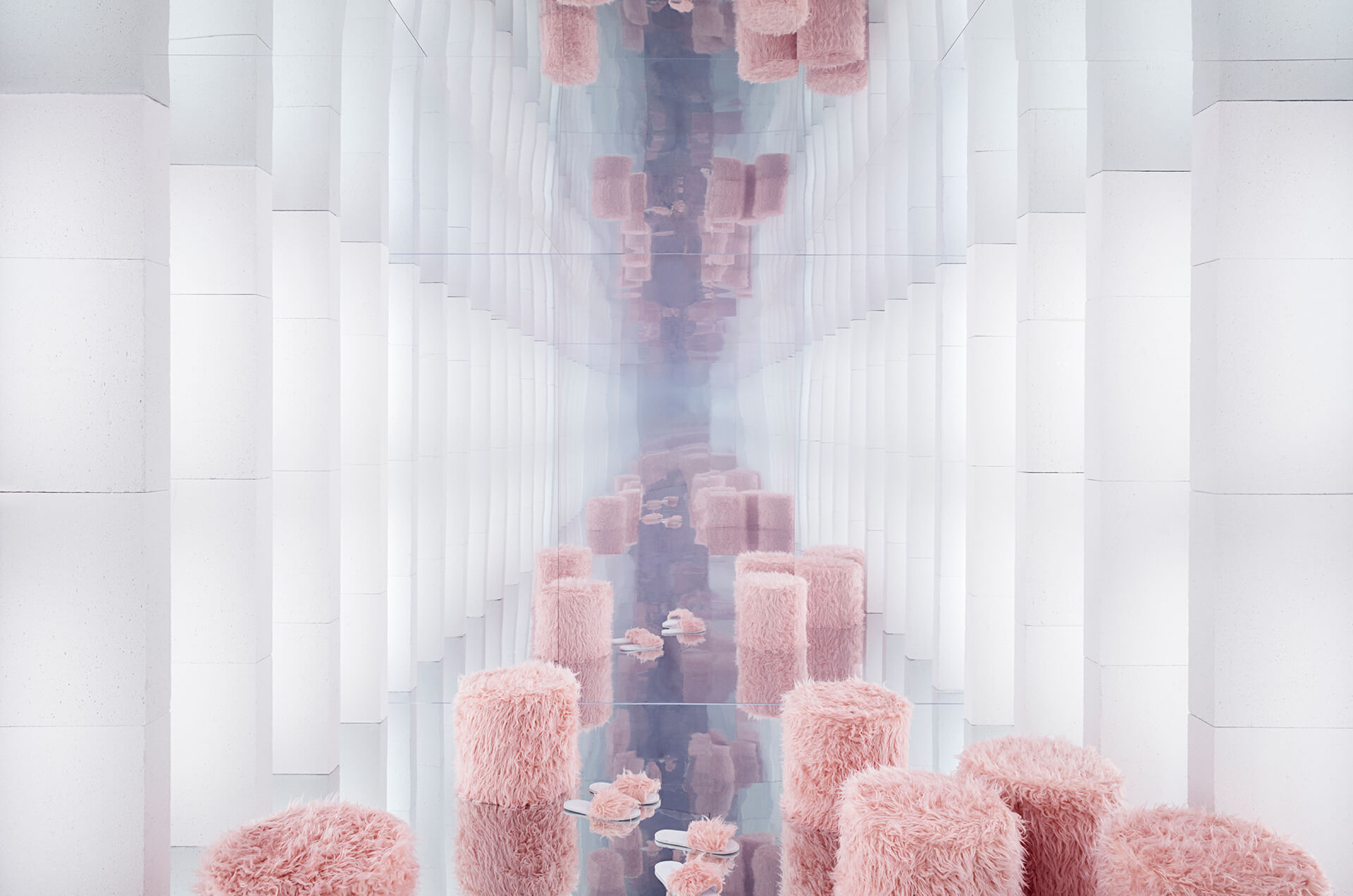 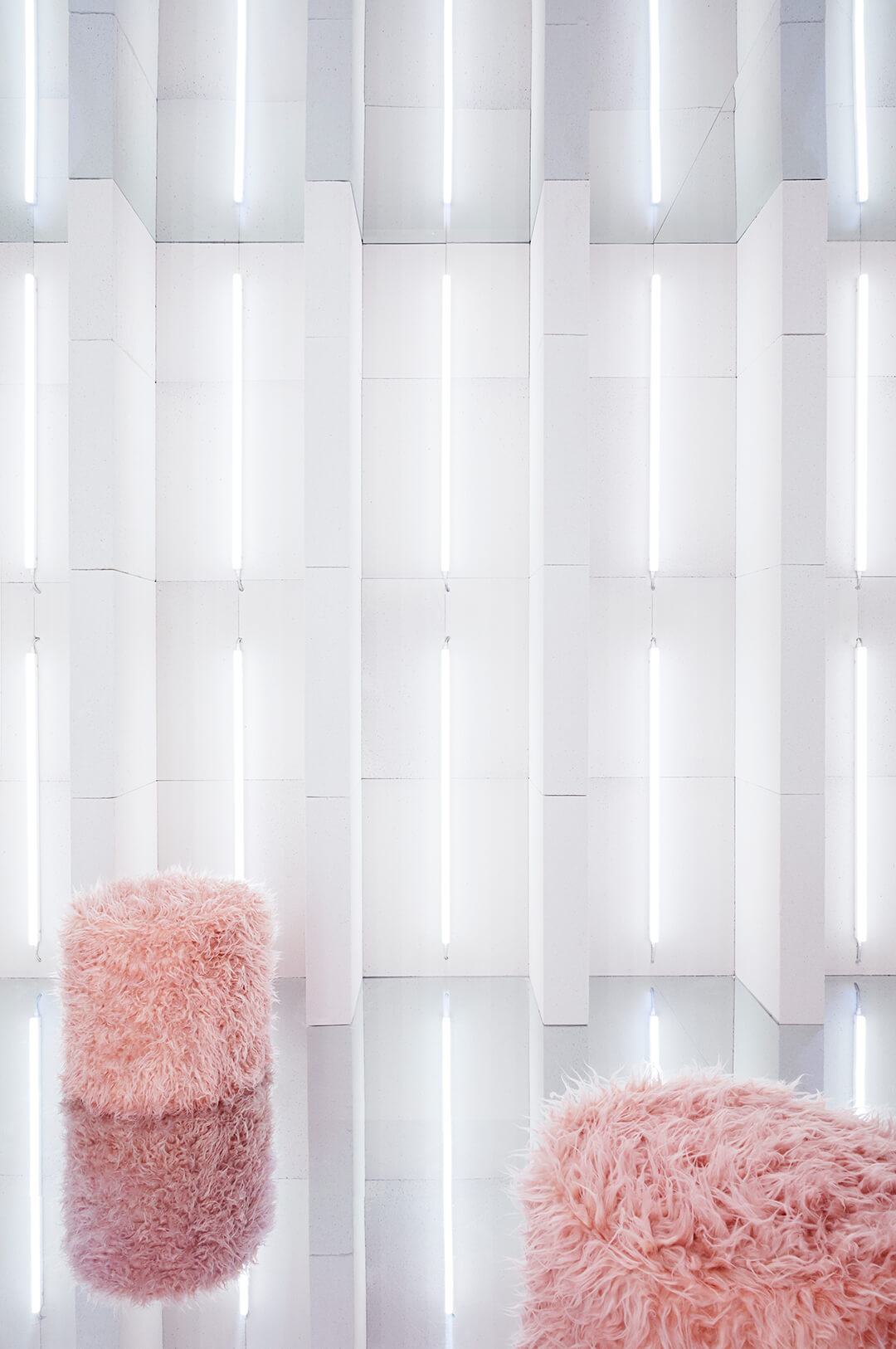 The Light Therapy Bar by Studio David Thulstrup is the conceptualization of a space for regeneration. Shown at the Frost Festival in Copenhagen, the installation provided a tangible manifestation of the body’s need for light, especially during long Scandinavian winters. With a combination of furry pink fabric and Dibond mirrors from Pyrasied, the space reflected the restorative potential of light. 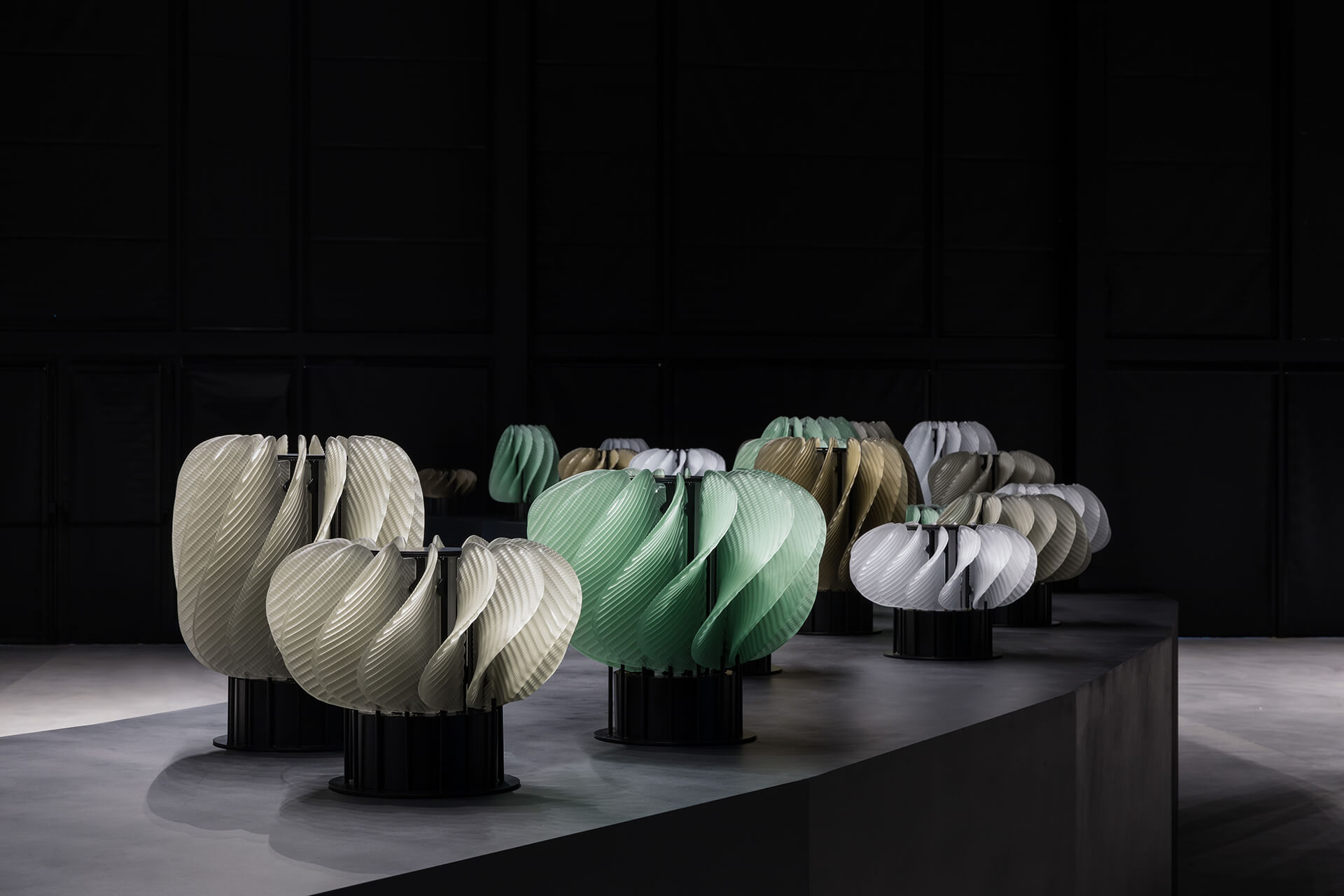 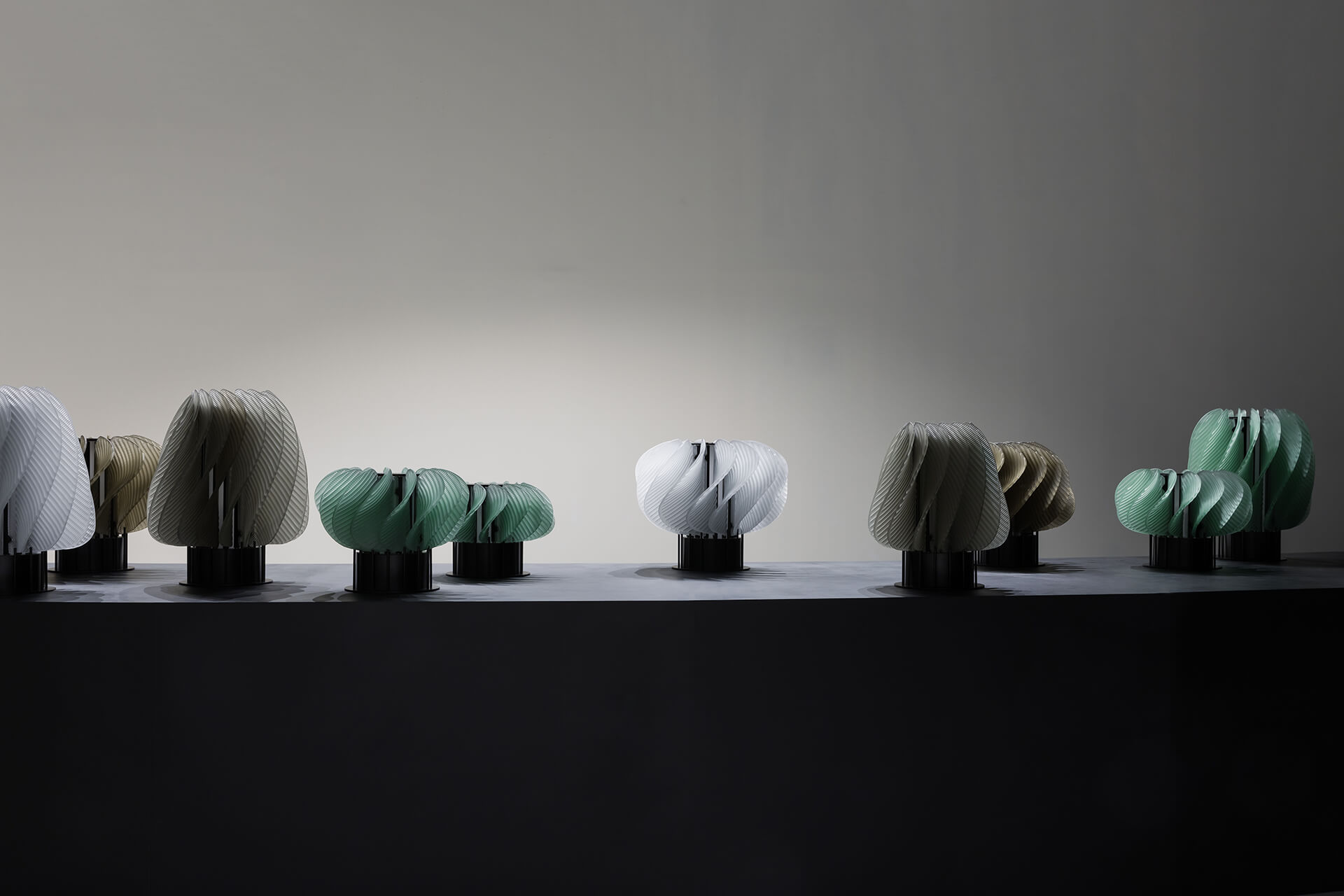 In collaboration with Spazio Krizia, design-duo Raw Edges created a large lighting installation inspired by and named after the Horah, a traditional Israeli folk dance. The installation – a landscape of 30 glass lamps whose ‘leaves’ were engineered by Wonderglass – appeared as a kinetic meditation enhanced by repetitive patterns of light and shadow.