Dutch design brand Moooi is brimming with character. So it seems apt that The Party, a series of five wall lamps in the shapes of human faces, will kick off the brand's More Moooi Moments events.

Moooi's Moments will throw out the seasonal product launch calendar, turning the annual Salone del Mobile into only one of a number of events held throughout the year. New products will be introduced one by one and presented in the brand's signature scenographic way. 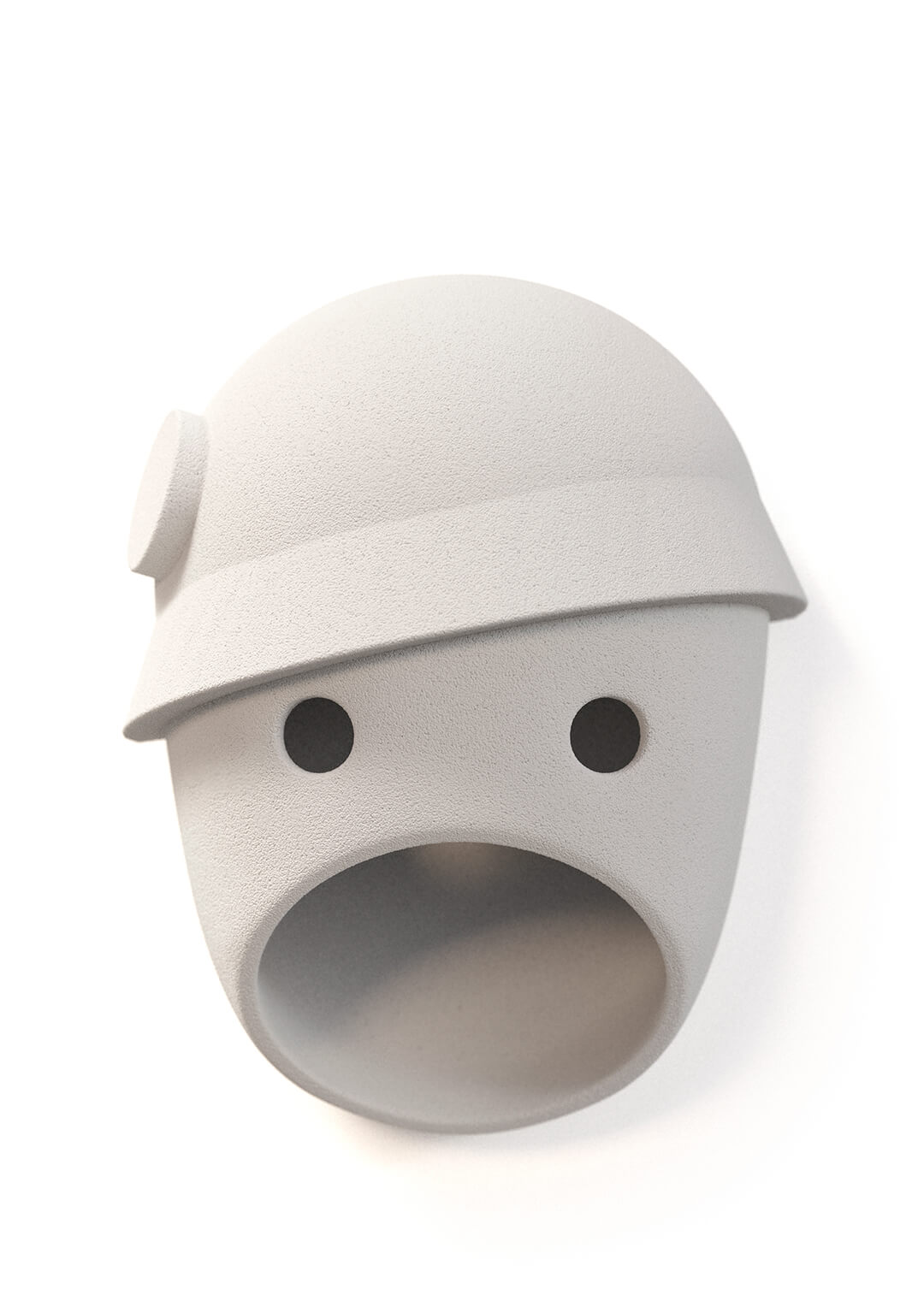 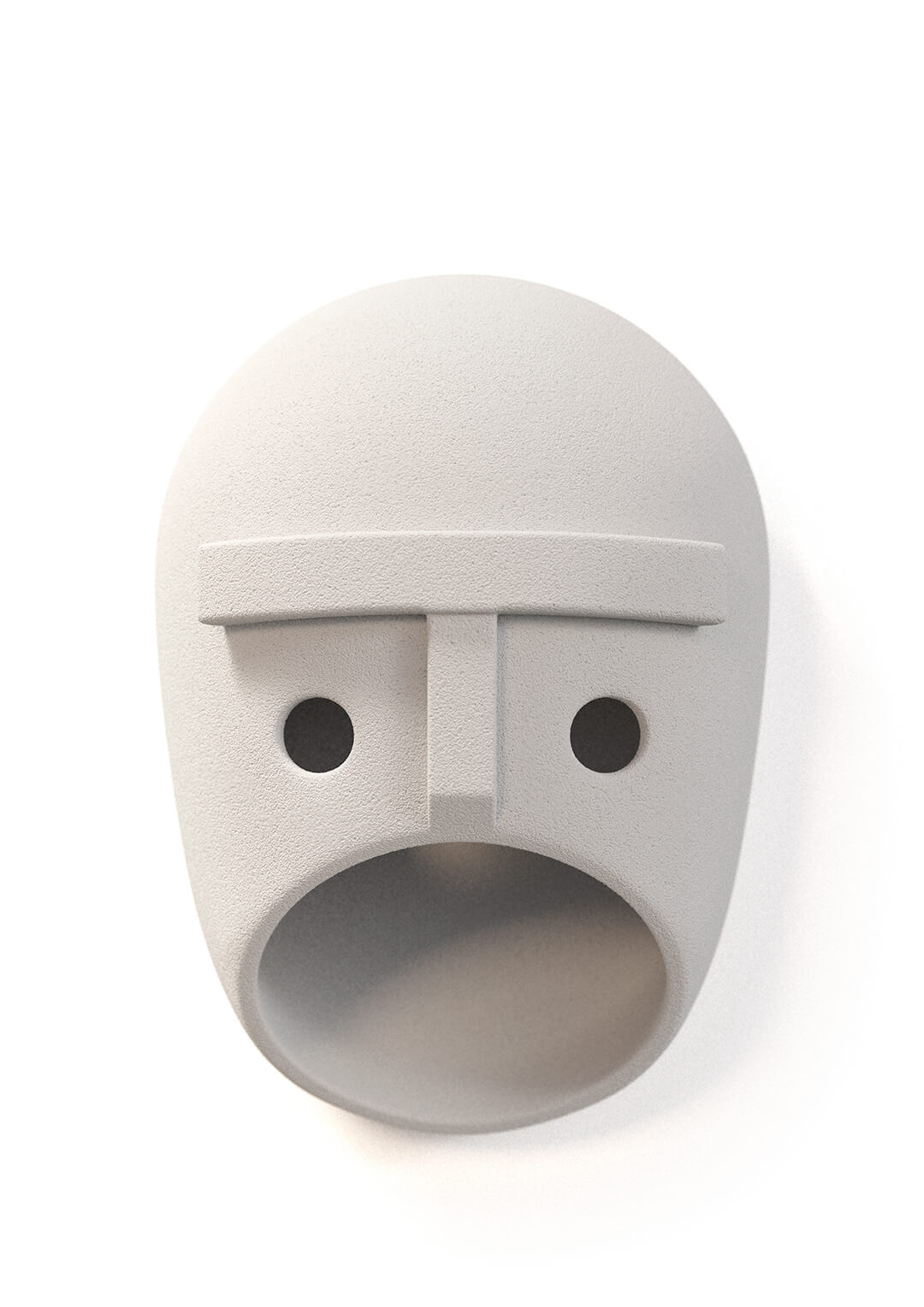 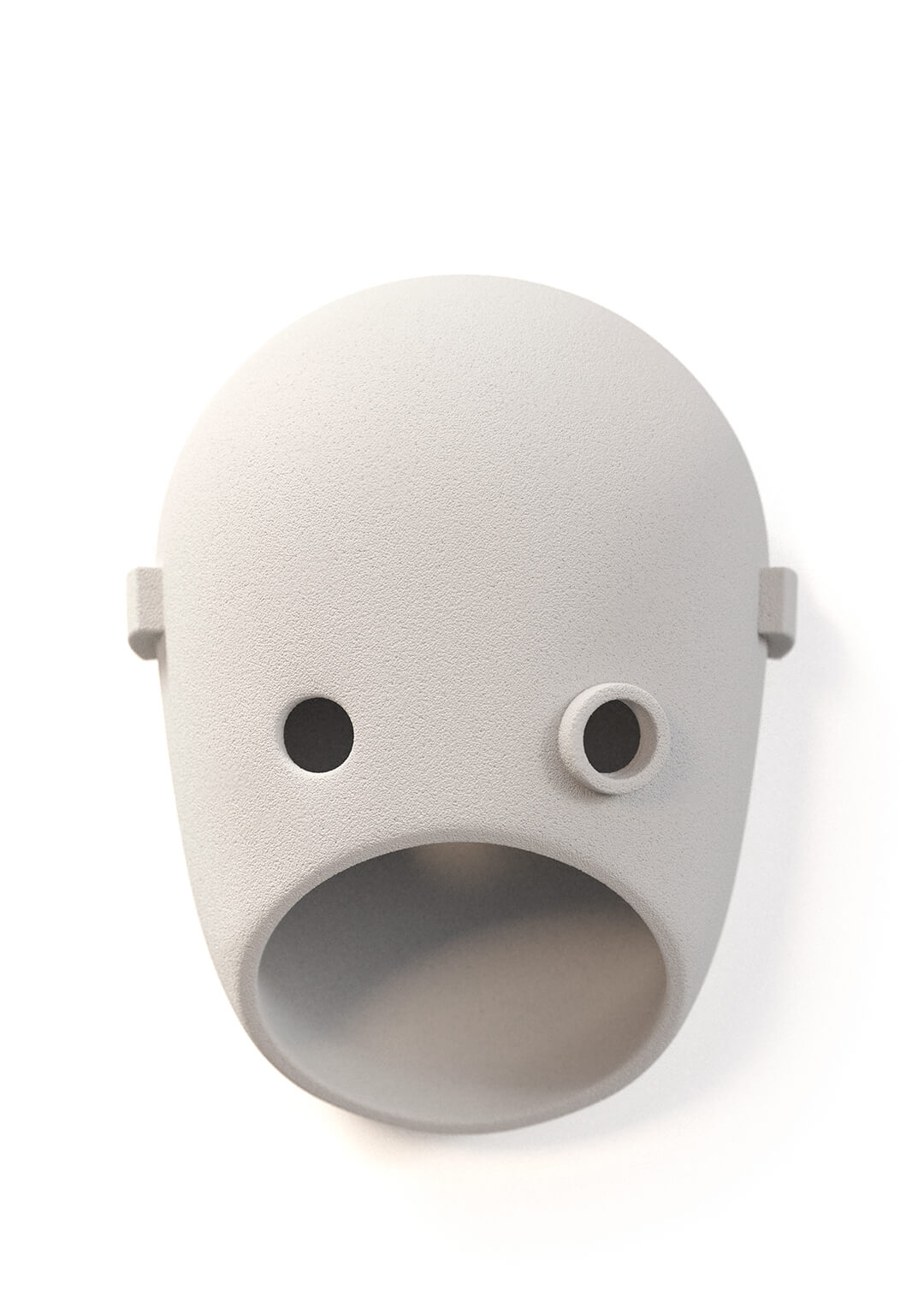 Top to bottom: The characters include Coco, inspired by Austrian inventor and actress Hedy Lamar, Bert, who is bitter with jealousy, and the monocled Mayor.

The Party are abstracted faces cast in warm grey ceramic and roughly glazed. Designers Jos Kranen and Johannes Gille of Kranen/Gille, two Design Academy Eindhoven alumni based in 's-Hertogenbosch in the southern Netherlands, restricted themselves to a 'dogmatic' formal language. They used only rudimentary geometric shapes, as they had previously in products like their Luftschiff lamp for Functionals and the Base clock for LEFF.

Developed as a public art concept based on the German neidköpfe or fratzen tradition of hanging masks to frighten bad spirits away, for Moooi the lights were imagined as characters in a narrative: 'We were imagining a party during the Roaring '20s in New York or Berlin,' said Gille. 'Or, think of a ball in a grand hotel on the shores of an Italian lake: Riva boats, champagne pyramids. Glitter and glamour, but underneath, a layer of suspense.' 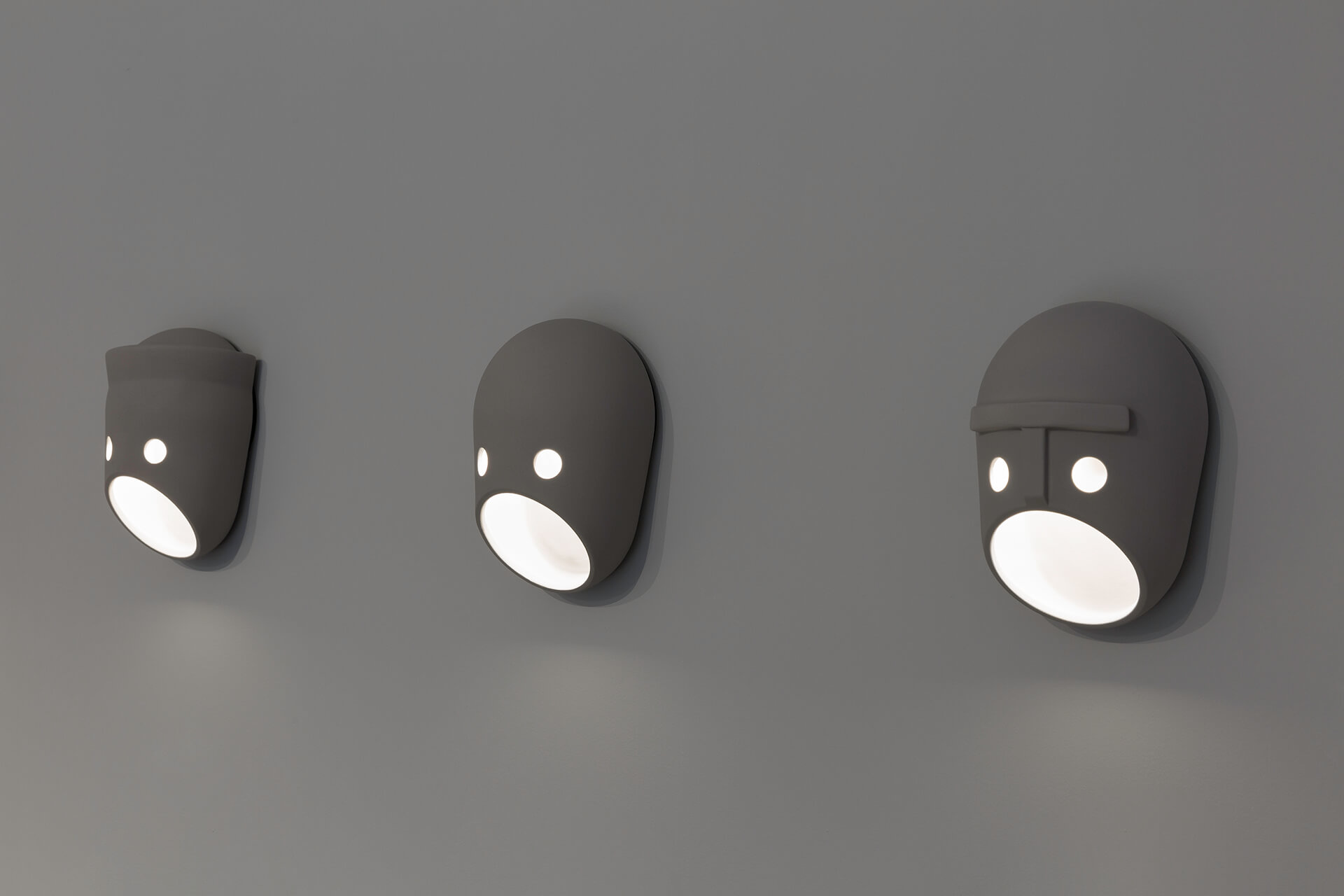 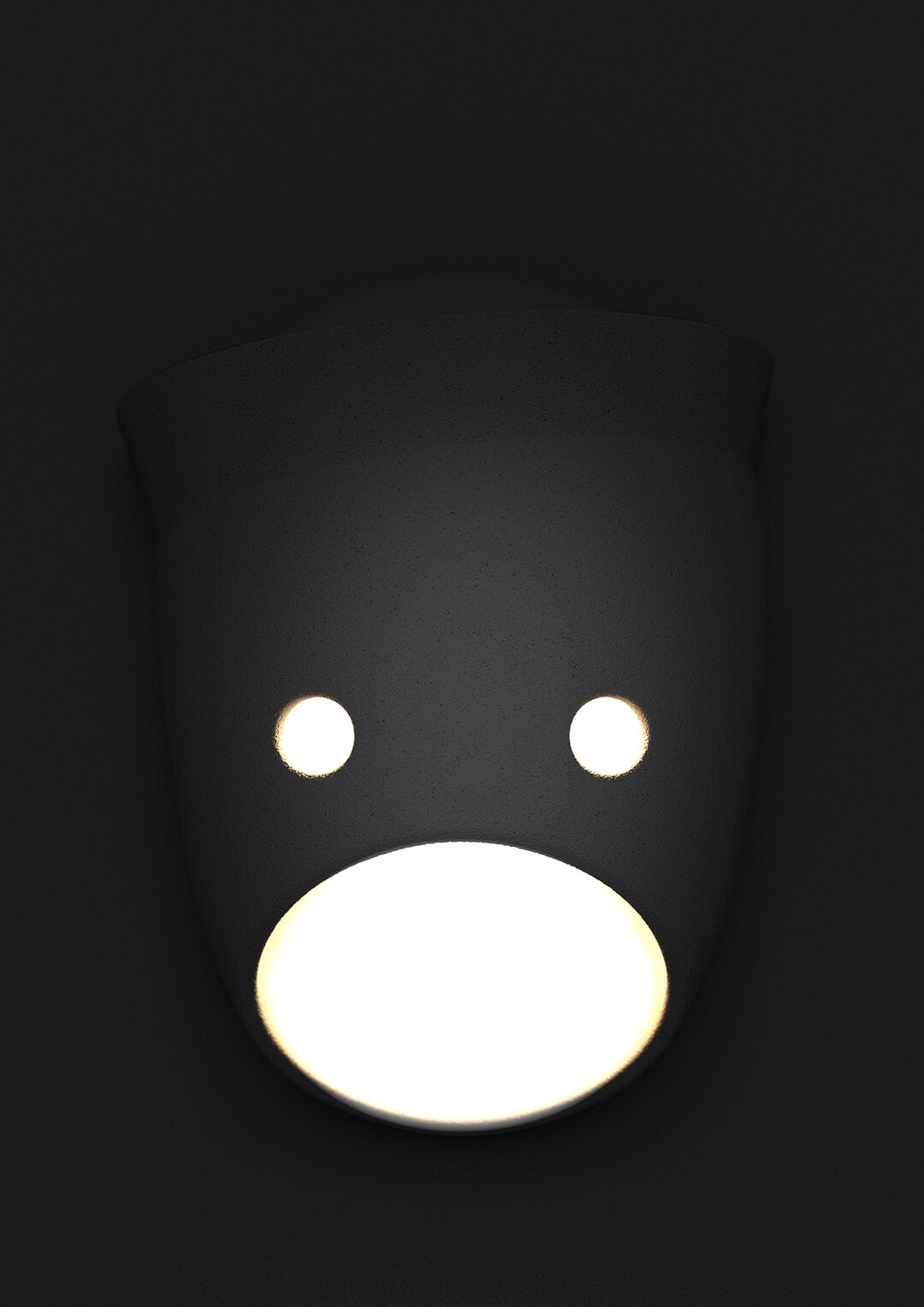 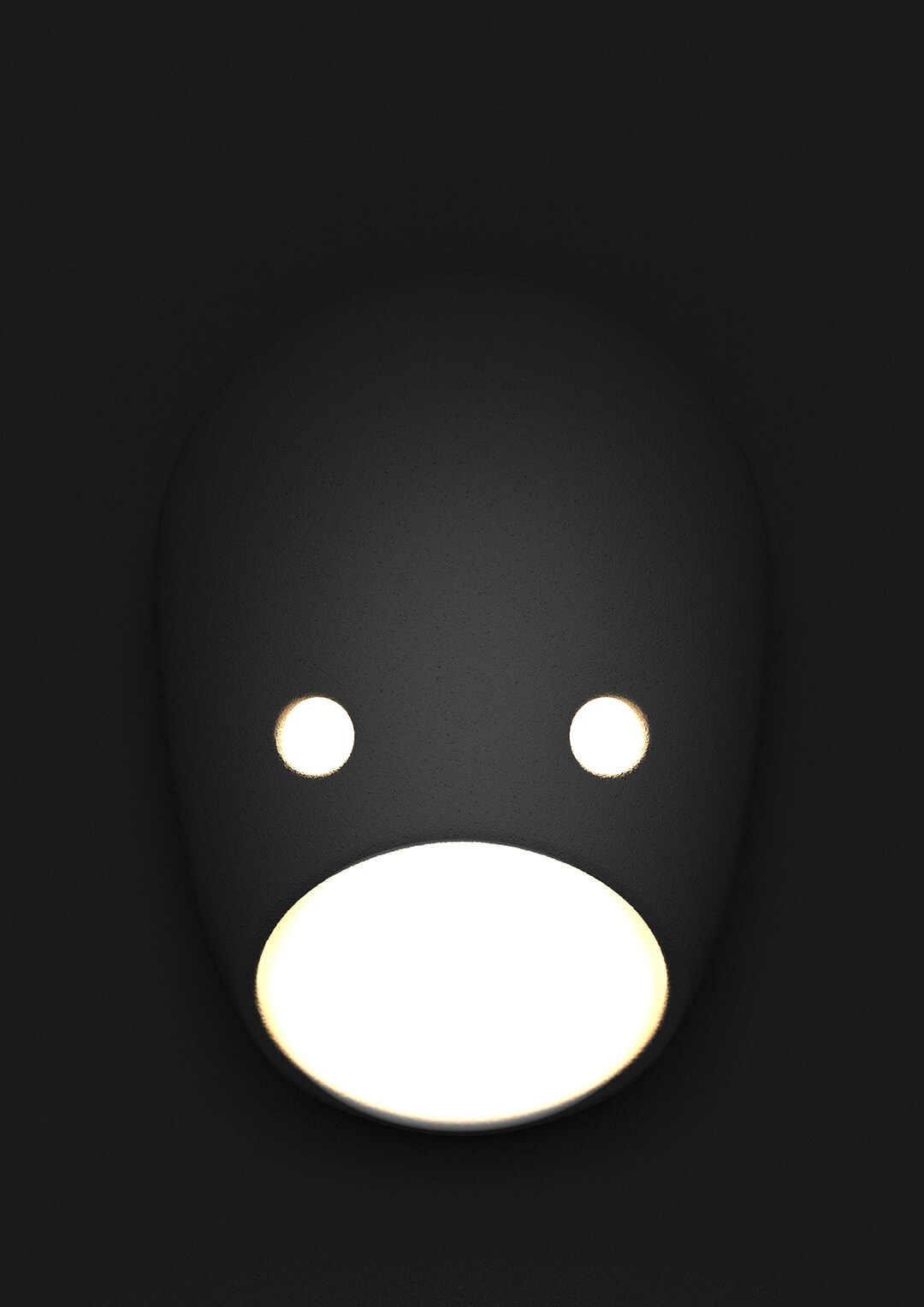 The five lights sell separately so that users can make up their own stories. (Middle and bottom) Glenn is a man with a mission, recovering from a difficult childhood, while Ted just might turn out to be an evil mastermind.

The pleasant darkness of the work fits with Moooi's strong personality. In spite of the minimalism of each face, in abstracting them, the designers lent each a character that feels both dark and light — a contradiction well-suited to a light that switches on and off. 'I think the interesting duality in the characters derives from our interest in the iconic, or sometimes even cliché, personalities found in the novels of Agatha Christie,' Gille said.

The family of five includes the vain and controversial Mayor, gazing intently through his monocle; the evil mastermind, Ted; Bert, full of potential, but bitter with jealousy; Glenn, the ideologue, 'searching for light above an ocean of darkness'; and Coco, with her jauntily tilted hat, who was based on the Austrian inventor (and actress) Hedy Lamarr. 'She inspired the strong female character,' Kranen said. 'And that’s an understatement.'

The five lights are sold separately so that consumers have the freedom to make up their own stories. 'The story has just begun,' said Kranen. 'Who knows who’s waiting backstage? An eccentric art collector? An eager racecar driver...?'