You would think that the millennial mandate of ‘work whenever, work wherever’ would move everyone away from their offices. And yet, no matter how mobile we’ve become, the truth is that humans are fundamentally social beings and, thus, people are finding ways to return to the shared workspace.

But these new offices belong to a changed world, one that has learned many positive lessons from the mobile ethos. A few visionary architects have seized this perfect storm to enable nothing less than organizational transformations through spatial environments. Among them, Clive Wilkinson Architects leads the way: the award-winning practice has spearheaded this workplace revolution, creating trailblazing spaces for the likes of Google, Microsoft and The Disney Store.

In our newest book, The Theatre of Work, Wilkinson presents the seven proprietary concepts that contribute to these great new workplaces, explaining them through 14 case studies. Here is an excerpt of the book – which you can order now.

Excerpt from The Theatre of Work

The challenge of working for a large organization is fundamentally one of scale. The larger an organization becomes, the harder it is for employees to understand their role and contribution to the company without the form of decentralization of neighbourhoods and team scales.

In the days when large companies were primarily employing people for routine and repetitive work, the question of social engagement in the workplace was of lesser importance. An employee was a productive entity that could be easily replaced. As computers assumed these repetitive routine tasks, the roles of humans transformed. Non-routine work was ascendant. Beyond the capabilities of mechanisation, the knowledge worker became the most valuable type of employee, and the extent to which a worker was positively engaged in their work was directly proportional to his or her creative and productive results. 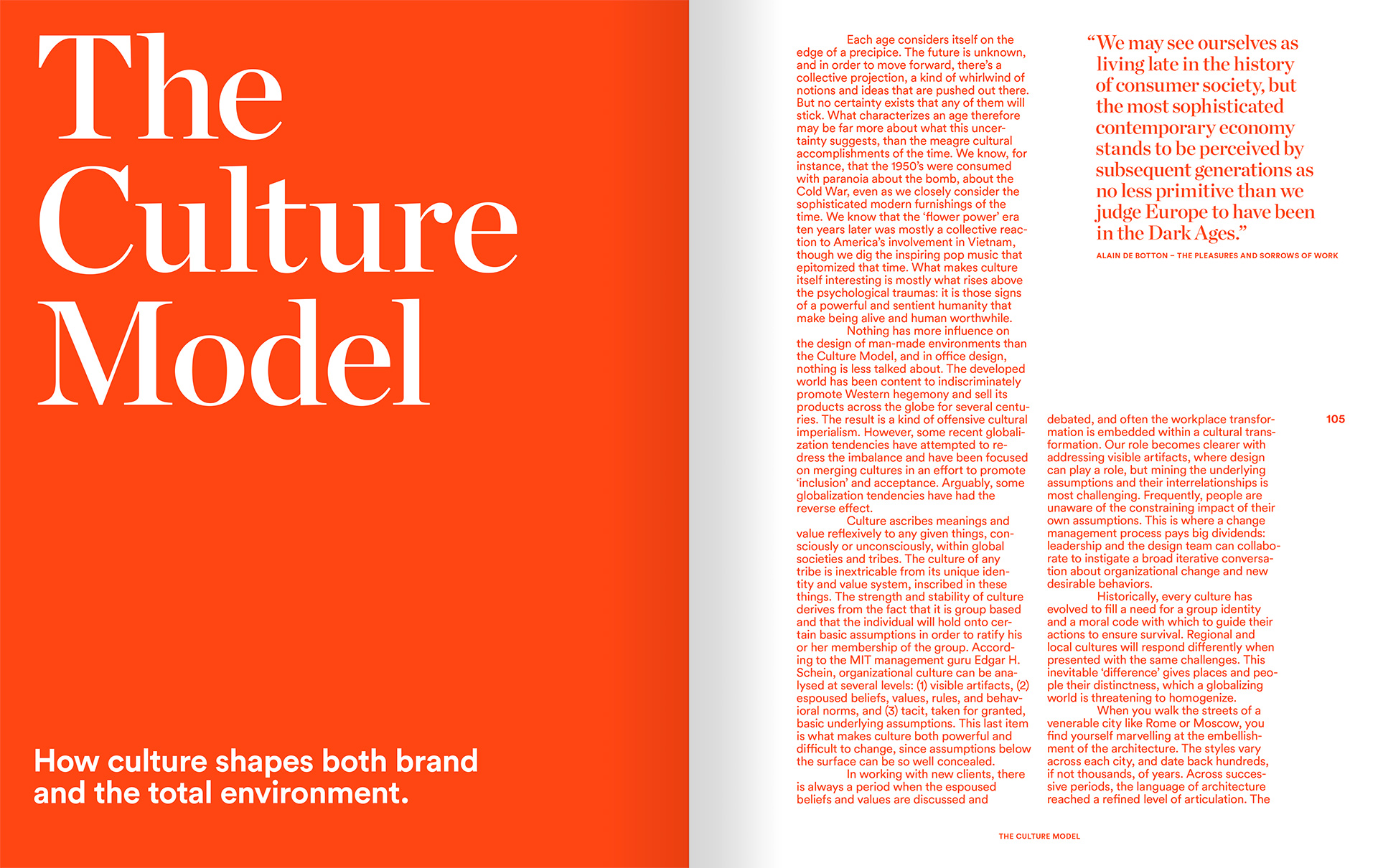 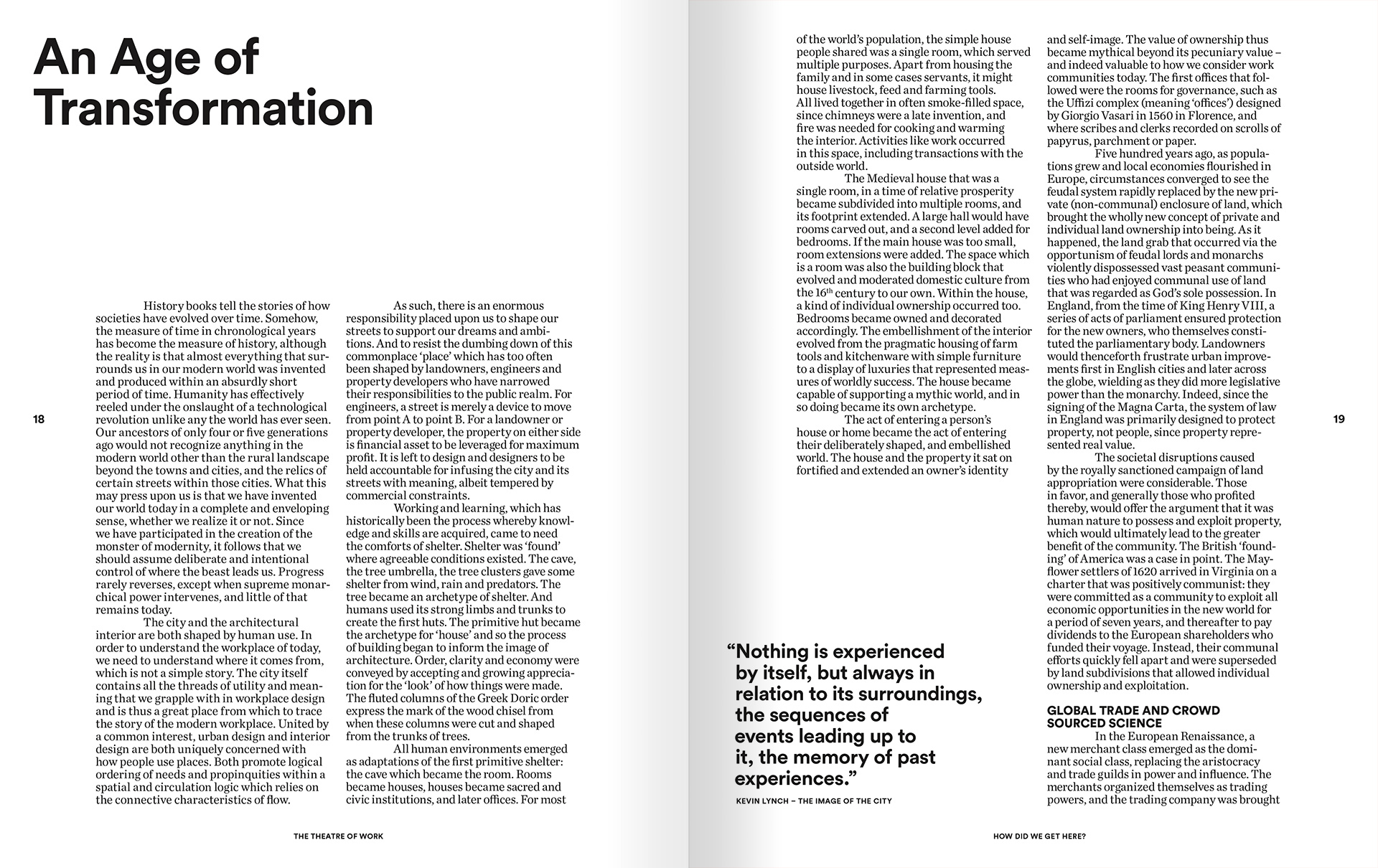 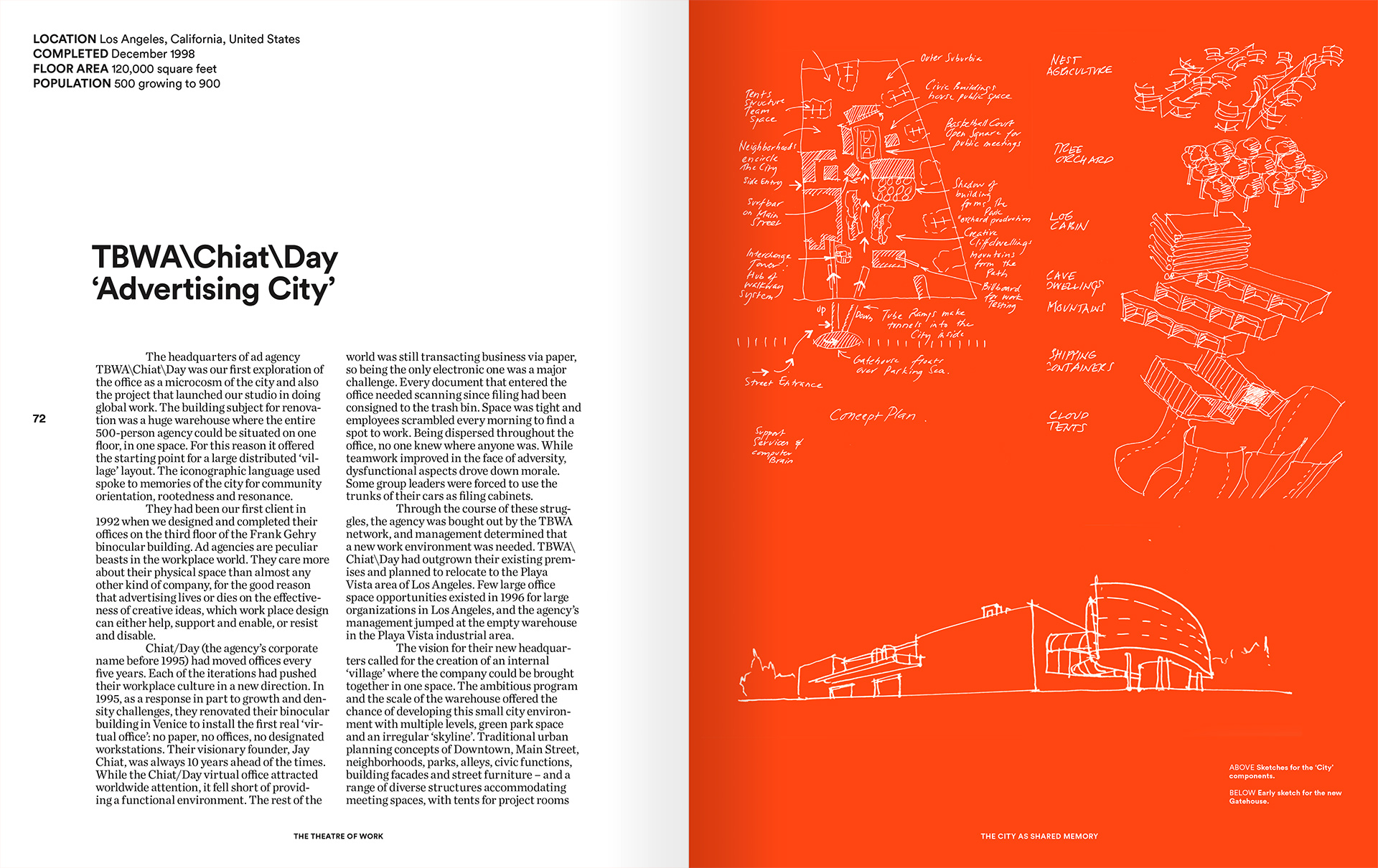 Several years ago, we observed that the problems of many large organizations were not repeated in small organizations. With variants between different business typologies, we have discovered through experience that team sizes are generally best when limited to four to 16 people. People have social capabilities that are not infinite. This fact is represented globally, in the size of typical office meeting rooms, regardless of what a company does. We know that larger groups peak at around 100-150 people because it becomes impossible to maintain meaningful and productive relationships with greater numbers of people. Extensive data supports this point.

It is significant that 100 was the unit for basic divisions of the Roman army. The Roman soldier was a ‘Centurion’ and this number has been used for the military company since Roman times. The word company, of course, extended into the modern business enterprise. Its etymology was originally from the Old French ‘compagnie’ – a military term which had origins in the Latin ‘companio’ meaning ‘one who eats bread with you.’ Hence its communal function is recognized in the word itself.

Robin Dunbar, the anthropologist and behavioural psychologist, proposed a theory known as Dunbar’s Number. That number is 150 and he suggested that number was the limit to the number of people with whom one can maintain stable social relationships – relationships in which you can know who each person is and how each person relates to the next within that numerical community. The actual number will vary somewhat from person to person, but the concept is valuable, when considering large corporate space planning. 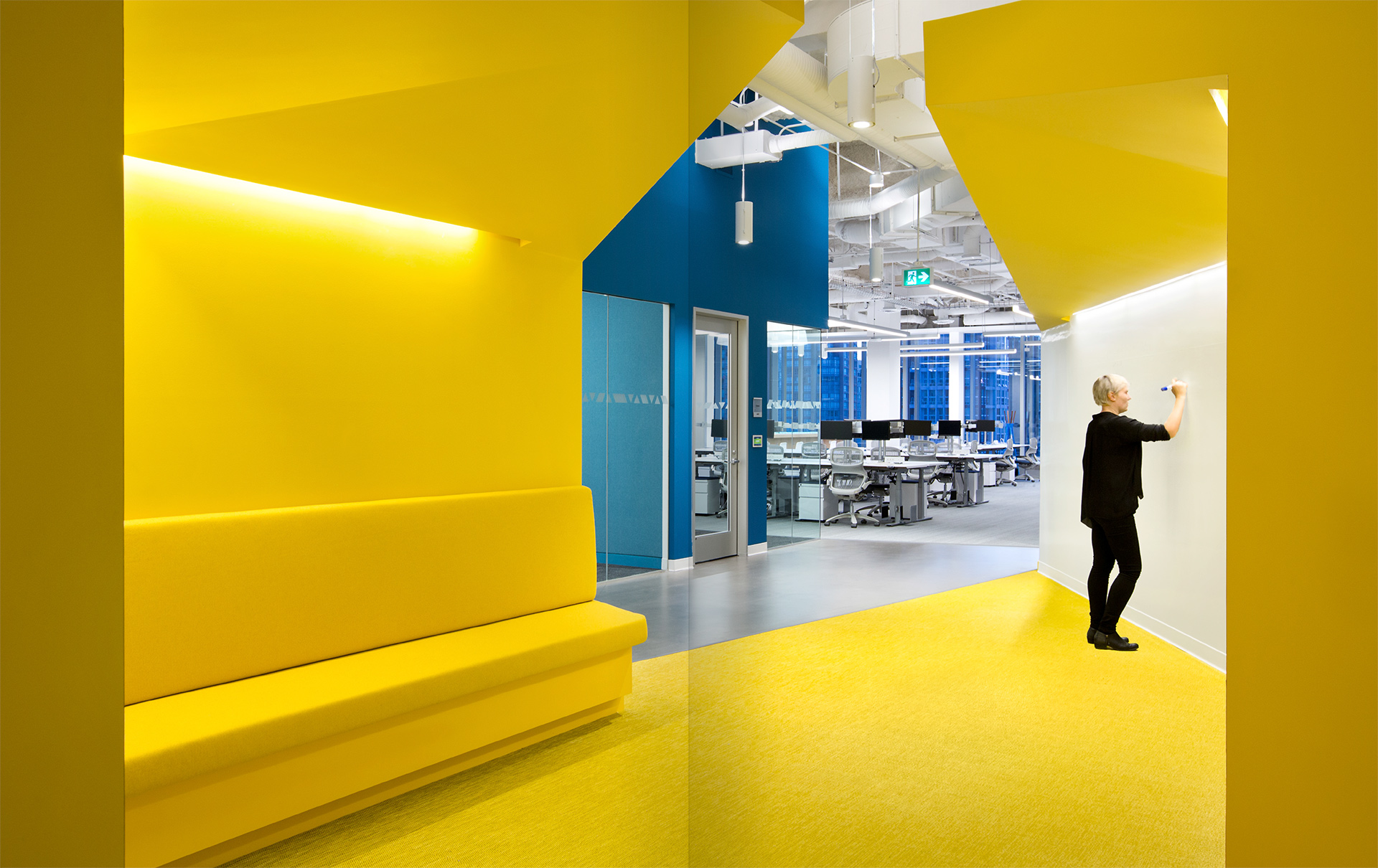 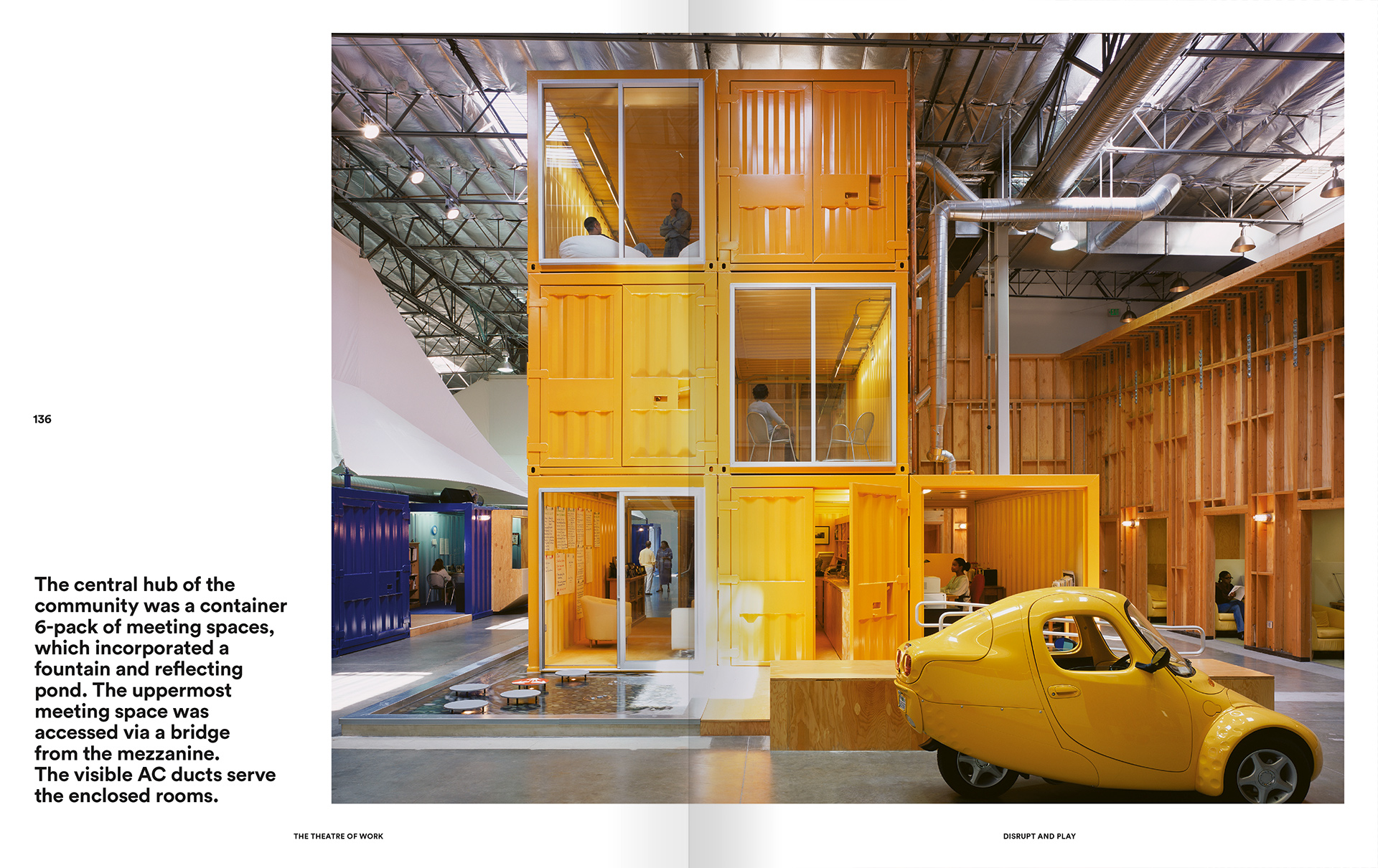 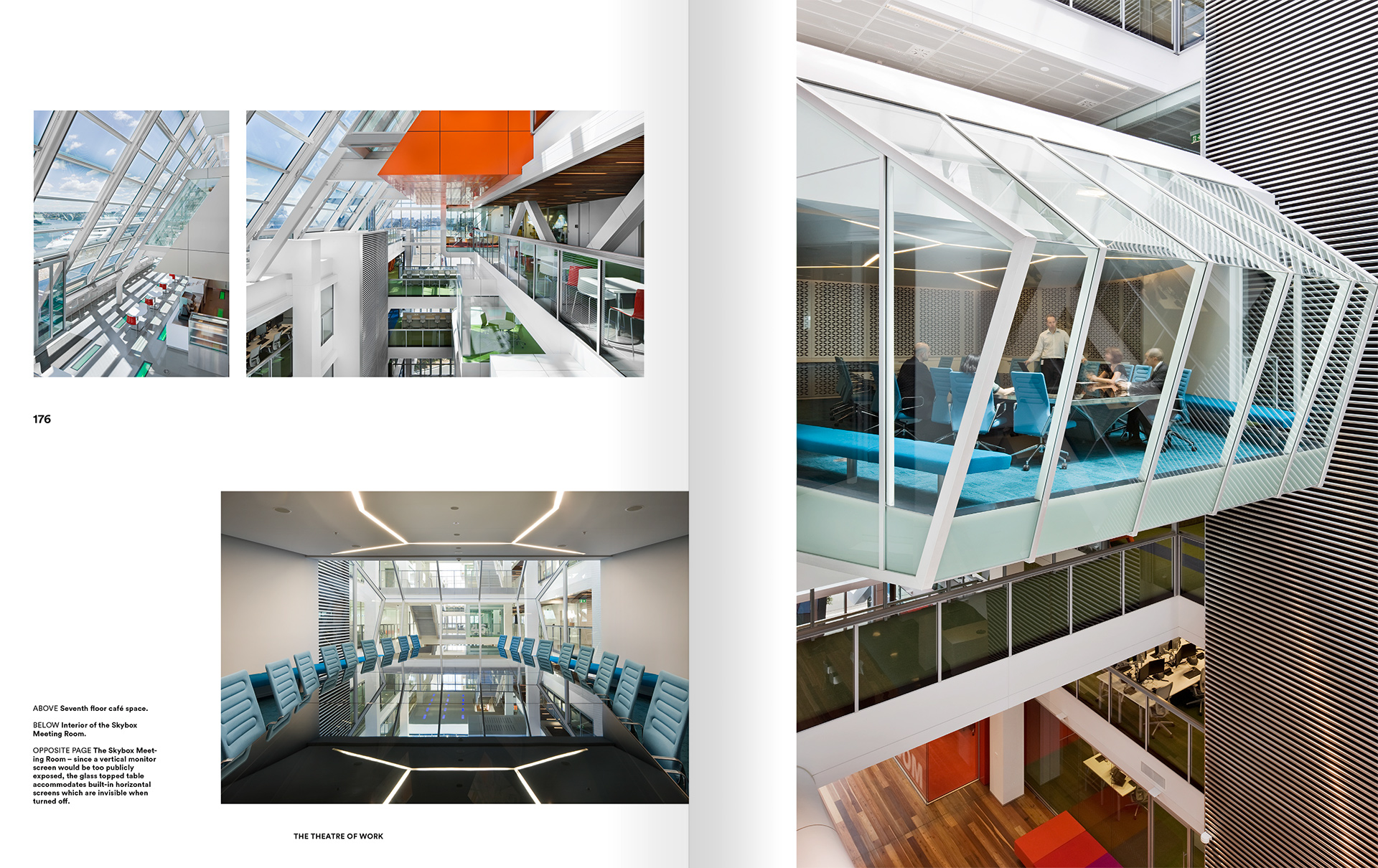 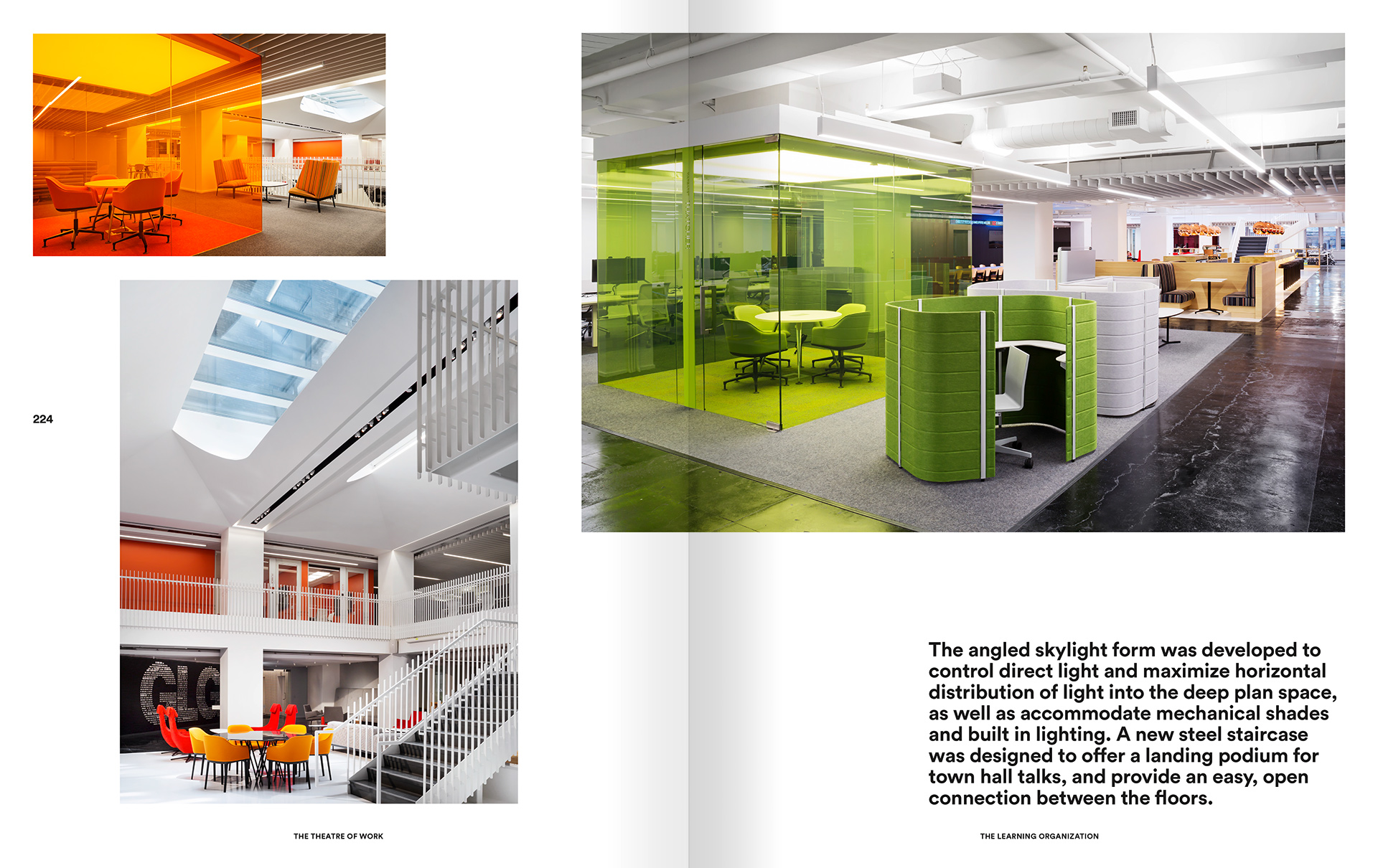 The small company, which is anything from a few people to perhaps 80 or 100, operates on familiarity and trust between all the members of the community. People quite simply get to know each other well and can operate instinctually and with deeper knowledge can readily predict their colleagues’ behaviours and actions. They can therefore move quickly in knowledge sharing and decision-making processes. In essence, they operate as extended families.

With the advent of the knowledge worker, the challenge of scale has become a critical business issue

Larger organizations have always struggled with employee engagement. Alienation, the sense of detachment or estrangement from the group, the loss of identity that comes with an inability to see or comprehend one’s place in or contribution to a large company are problems that were identified early in the Industrial Revolution, and which Marxists attributed to Capitalistic decadence, or the unsustainability of the Capitalist machine.

With the advent of the knowledge worker, the challenge of scale has become a critical business issue. Corporations are finally listening and observing. Human Resources is conducting surveys, board directors are debating, and engagement initiatives are coming to the forefront. Structural ideas in the physical environment, like neighbourhood formations, are becoming common in an authentic place-making effort. After all, employees do not engage in numbers or statistics – they want and need human environments which resonate, which support manageable and accessible communities, and which inspire them. None of this is provided by a magic formula.

The two case studies [showcased in this chapter of the book] provide a window into two very different scenarios. The Intuit building project begins with a single ‘centring action’ in the form of a large sculpted atrium, which invites large company meetings, as well as a number of shared communal spaces including food service. The building furthermore supports and encourages work on the outside edges of the building, blending terraces and garden landscapes. From our first concepts about workplace, we promoted the idea that a building should reveal its purpose on entering, or as soon as possible after entering. With Intuit, we evolved that idea to the next level. The building is about community first and foremost, hence the first experience is of the Atrium which acts as a vertical street.

In a very different vein, The Barbarian Group operates at the tipping point of a small company. We designed a workspace for 125 people with the ability to expand to 175. Ensuring connectivity between all ‘Barbarians’ was paramount. For that, we designed a single 408-sq-m table to connect everyone, so the physical vibration of a community could literally be felt.

The Theatre of Work is available for purchase in our web store.