Post-pandemic urbanism: why we should promote parkland over parking

We've been cataloguing exactly how architects, designers, urban planners and city officials are undertaking the transformation of outdoor urban spaces, helping turn the city inside out in the process. We did so schematically, breaking down the street into its constituent parts, from the facade to the pavement to the roadway and the point at which the street meets, or more likely becomes, the park. This is the final instalment of the series – read more here.

The pressure from the pandemic to expand public space might finally spell out the end of the car as the core unit around which our cities are designed. It’s a battle urbanists have been fighting for decades, especially in countries in which personal vehicles dominate the transport landscape, such as the US. In New York around 75 per cent of all street space is dedicated to vehicles according to the US Department of Transportation. And in Austin, for example, just over half the streets have proper sidewalks.

Calls to decrease provision for vehicles in dense urban areas have grown over the last five years, largely driven by increased awareness of air pollution’s impact on public health. Tangible change has been limited, however, and public pushback strong. Madrid took the bold move to severely limit traffic, before a new local government won power on the promise to reverse the decision. The pandemic has now provided renewed impetus, with Athens planning to reallocate 50,000 m2 of public space for cyclists and pedestrians and many other cities pledging to do the same. But in spite of our current crisis, resistance to car-free zones remains. In London, some local councils are already refusing emergency funds provided by the Mayor’s office to create new segregated cycleways.

This lack of enthusiasm amongst some groups might be explained by a commensurate lack of vision for how car-free public space should be realized. Swapping the convenience of car travel for access to an expanse of asphalt is a hard sell, especially for those disinterested in cycling. Europe’s busiest shopping street – London’s Oxford Street – has seen repeated plans to ban vehicles fail. In an open letter published in Wired, co-founder of London-based transport architecture specialist New Territory Luke Miles criticized the lack of imagination shown by the Mayor’s most recent unsuccessful attempt: ‘There needs to be a broader, more ambitious discussion about how best to transform one of the world’s most iconic streets that reaches beyond simple pedestrianization.’ His alternative vision – to ‘transform Oxford Street from a grey retail canyon into a new piece of urban parkland for London’ – is the sort that will likely receive renewed attention in the post-COVID era. 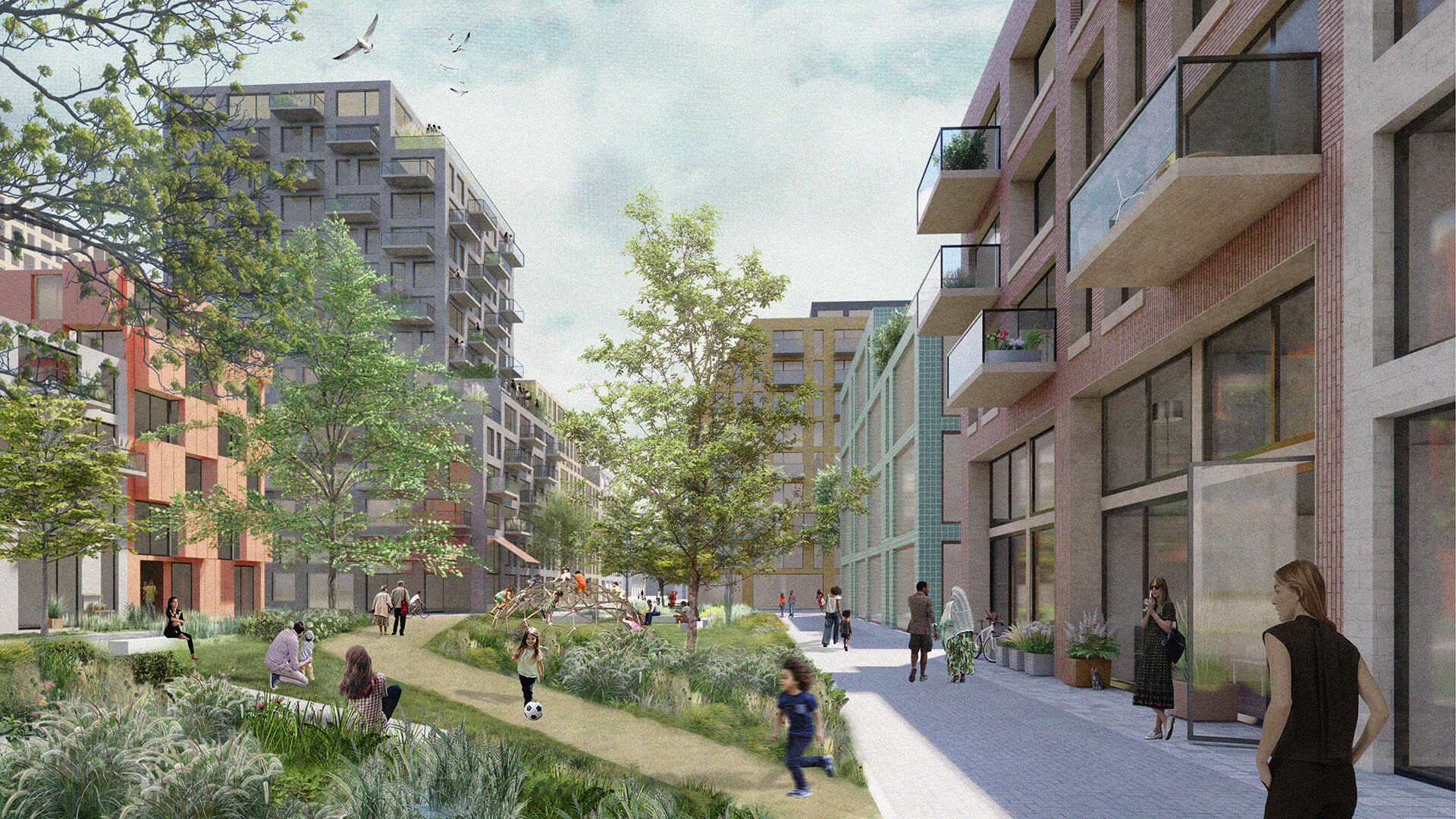 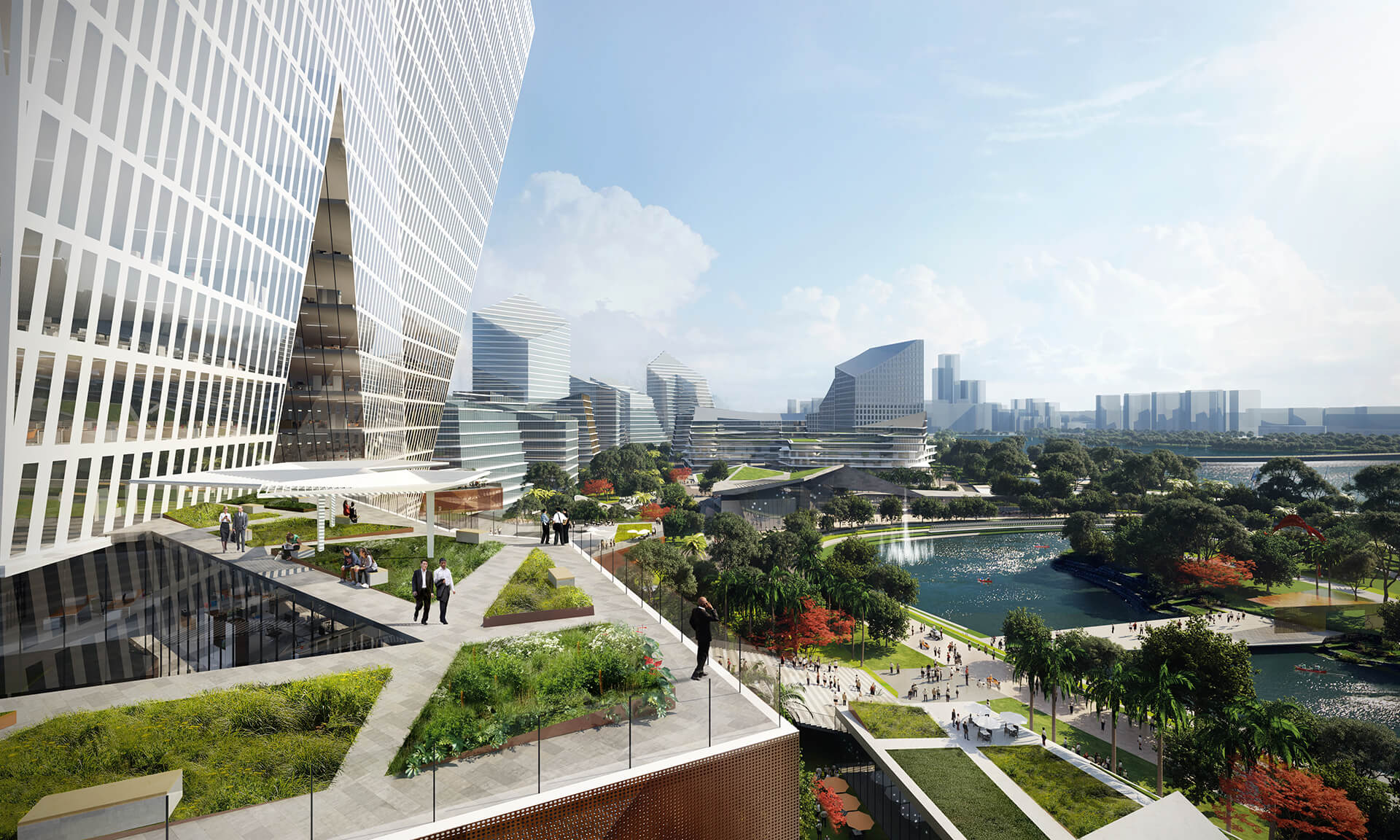 Header and top: Utrecht’s forthcoming Merwede neighbourhood will transform a former business park into a car-free urban park that will home 12,000 residents. Renders: Marco Broekman and OKRA | Middle and bottom: In Shenzhen, plans for a car-free district roughly the size of Manhattan are being developed by technology company Tencent. Renders: Courtesy of Tencent

Few things have been at more of a premium during the first half of 2020 than access to nature. Lockdown has proven the social and psychological necessity of green space, as well as how poorly it’s provisioned. About a third of Americans do not have a park within a ten-minute walk of home, according to The Trust for Public Land. In the UK, 2.7 million people do not have a publicly accessible local park or green space within a ten-minute walk.

Addressing this shortfall will require a change in approach to how we integrate nature in the city. ‘What is considered green space must move beyond the traditional parks concept,’ says LSE’s Dr Meredith Whitten, writing in response to the COVID-19 crisis. ‘Urban nature and the benefits derived from it comes from integrating a range of green assets – pocket parks, street trees, green roofs and green walls, green corridors, highway verges – into a network of green infrastructure across the city.’

This ‘networked’ approach can be seen in several recent master plans that will likely set the blueprint for many future developments. Utrecht’s forthcoming Merwede neighbourhood, which was designed under the motto ‘green, unless’, will transform a former business park into a car-free urban park that will home 12,000 residents. ‘We can design spaces without the straightjacket [or] rules of the car, and thus focus on essentials for a high-density area, which is the quality of public space, city on eye level, green, biodiversity, climate adaptation and meeting places for social interaction,’ lead architect Marco Broekman told FastCompany. In Shenzhen, plans for a car-free district roughly the size of Manhattan are being developed by technology company Tencent. In place of roadways, a web of green spaces such as commons, groves, wetlands and parks will promote more active forms of travel. ‘A typical city calls for simplistic and efficient zoning to keep everything under strict control and facilitate the flow of goods, cars and people,’ explains Jonathan Ward, a partner at NBBJ, the architecture firm responsible for the master plan. ‘In today’s computer-driven world, we are free to imagine a highly integrated city that brings "work, live, play” closer together.’ 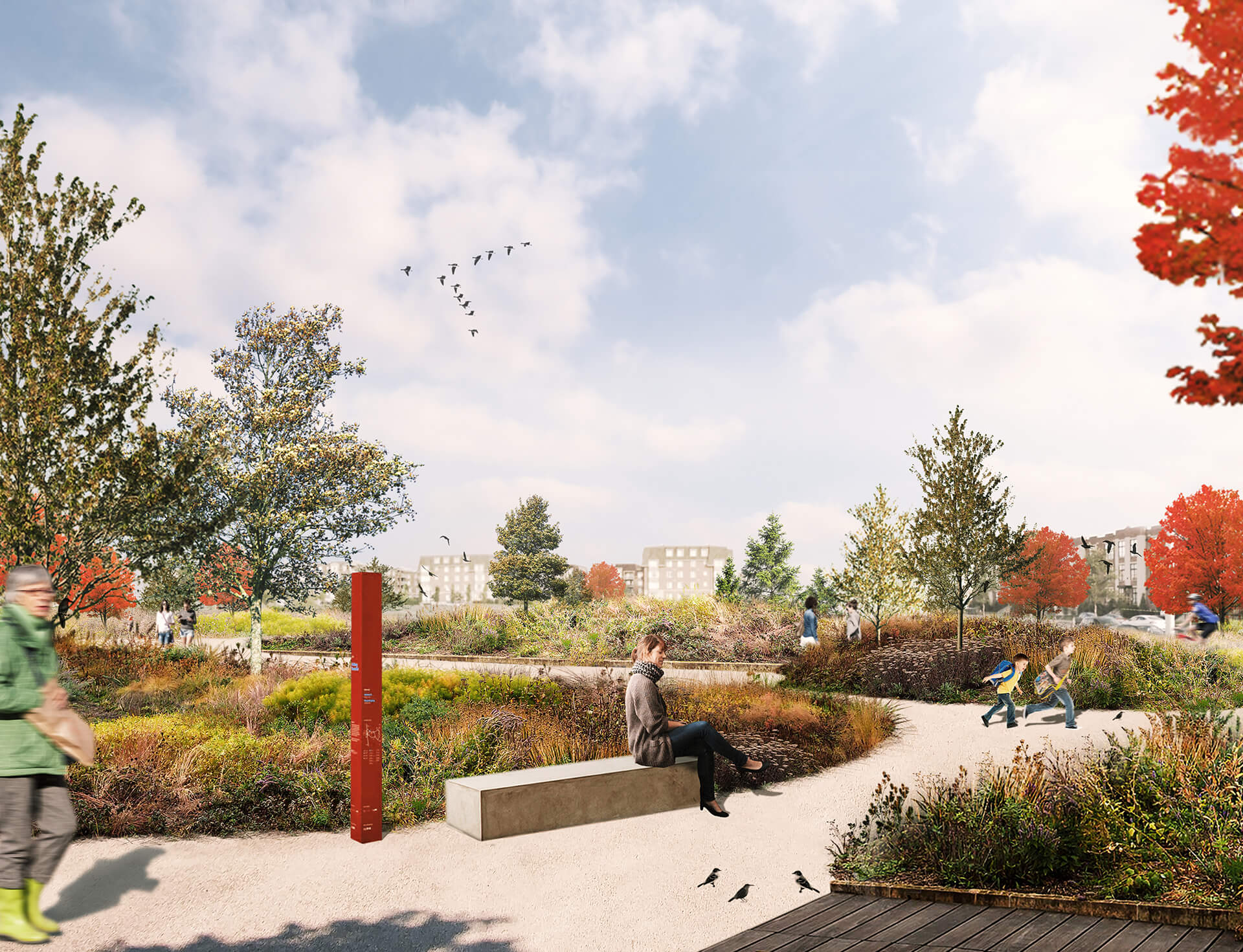 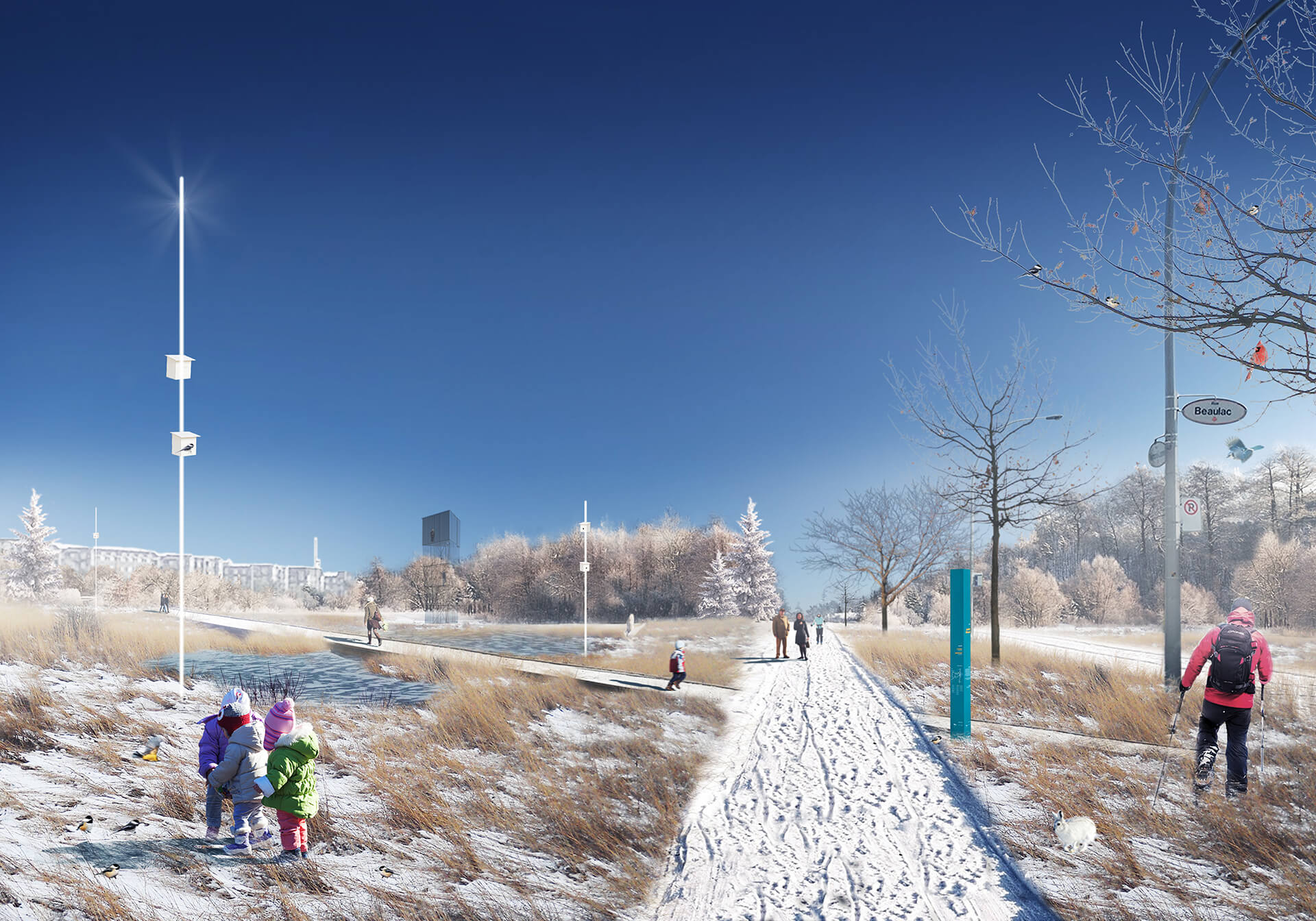 Above: In Montreal a biodiversity corridor is being created across the Saint-Laurent district, which is currently covered in approximately 70 per cent asphalt. Renders: Courtesy of Civiliti

This interconnection of green space is vitally important for the animal and insect life that support the health of plant ecosystems. The return of animal life to urban centres has been hailed as one of the silver linings of the current pandemic, but, as rewilding advocates have long argued, the current paradigm of creating isolated pockets of planting moated by concrete limits the ability of nature to recolonize. City planners are now starting to recognize the value of building biodiversity corridors that support the transit of both people and key species such as pollinators. In Montreal one such corridor is being created across the Saint-Laurent district, which is currently covered in approximately 70 per cent asphalt. A strip of wasteland will be turned into a series of flowering meadows that will attract birds, pollinating insects and small animals. ‘The corridor will enable the transition from a mostly asphalted, fragmented territory to a diversified urban landscape, connected to all living beings,’ explains Fannie Duguay-Lefebvre, a spokesperson for urban design firm Civiliti, one of the partners on the project.

The framing of the urban realm as somewhere we can cohabitate with nature is also at the centre of Australian artist Linda Tegg’s Infield installation, currently on display at ArkDes. Continuing the architecture museum’s work with the Swedish government on its strategy for livable cities, the piece sees the museum’s car park turned into a meadowland of 60 native plant species. It is designed to provoke discussion around ‘ecosystem services’, which the museum describes as ‘the ways in which the human experience is advantageously altered and enhanced by the natural environment’, which run from stormwater management to food security and mental wellbeing. Describing the piece, Tegg explains that ‘a location that we park our car for an hour could be inhabited by hundreds of plants and animals. . .there’s a space where all these species, including us, can be together’.

Read more reportage on the impact of the COVID-19 crisis on spatial design here.