When our Amsterdam-based panellists tuned in to the Zoom call to share their thoughts on post-pandemic workplaces, we already got a glimpse of what was to come. Ramon Beijen, creative director of commercial real estate firm CBRE, joined the conversation from his company’s Frame Award-winning office called The Core, while Francesco Messori, creative director of spatial and conceptual design community D/Dock, sat barefoot in his bookcase-filled home.

Led by Frame’s director Robert Thiemann, the discussion kicked off with a look at the pre-pandemic state of affairs in the office industry. Beijen said that prior to the virus outbreak, workspaces were designed for growth — of businesses and people. ‘We created spaces for people to come, co-create and collaborate.’ He illustrated his words with photos of the new Booking.com HQ, a project consulted on and managed by CBRE. The interior of the 72,500-m2 Amsterdam building, designed by UNStudio and HofmanDujardin in collaboration with a range of studios, centres on inclusiveness and diversity.

Messori looked back on a work landscape defined by movement and haste. Showing images of Venice invaded by mass tourism, inflicted by the fear of missing out, he spoke about the overload of business trips and the constant feeling of having to be everywhere in order to be ‘global’. Lockdown, he said, is an incredible opportunity. ‘It offers a moment of silence and has the ability to enrich us.’ As his late colleague once said, ‘acceptance is one of the best forms of happiness’, and right now accepting the new normal is key. 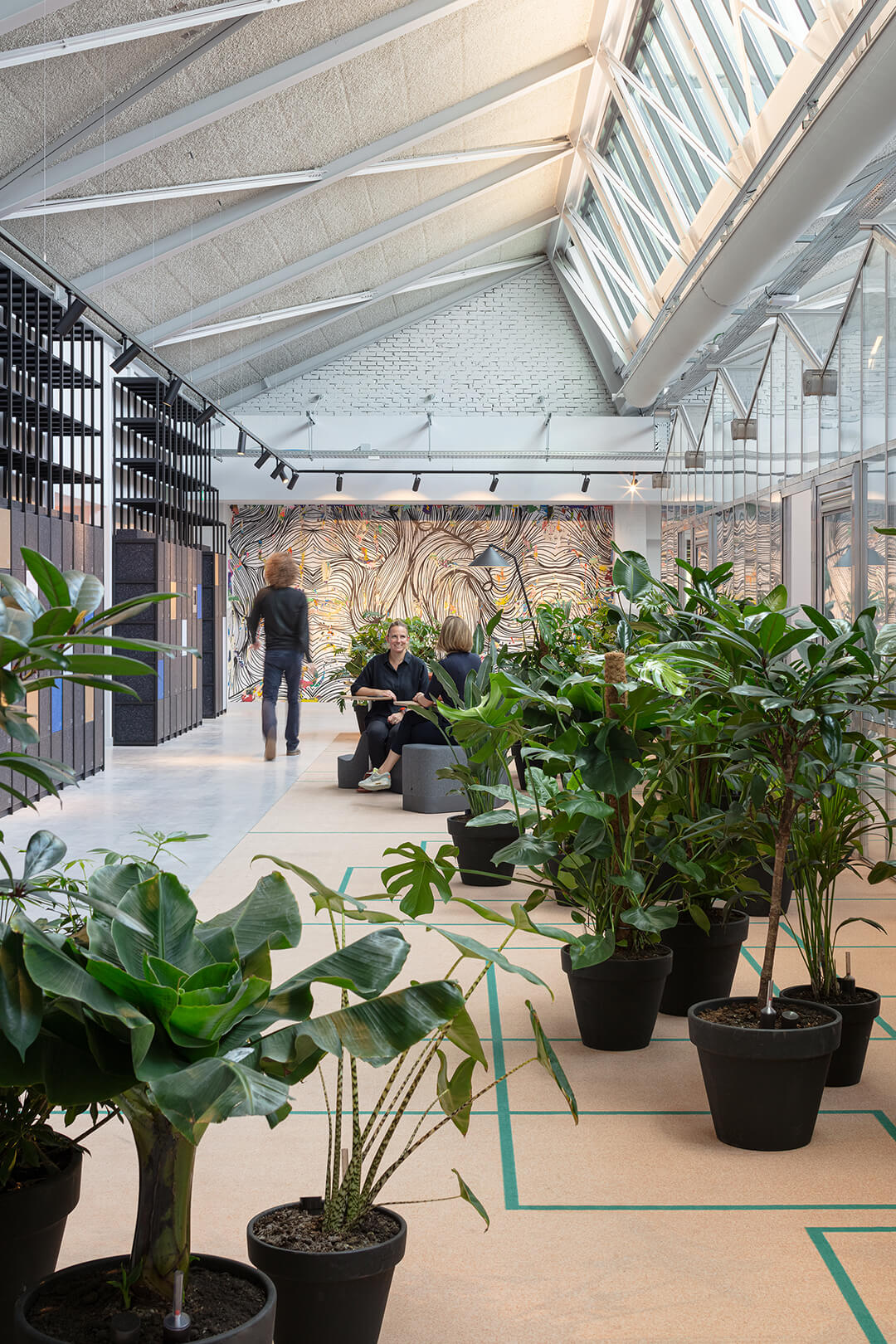 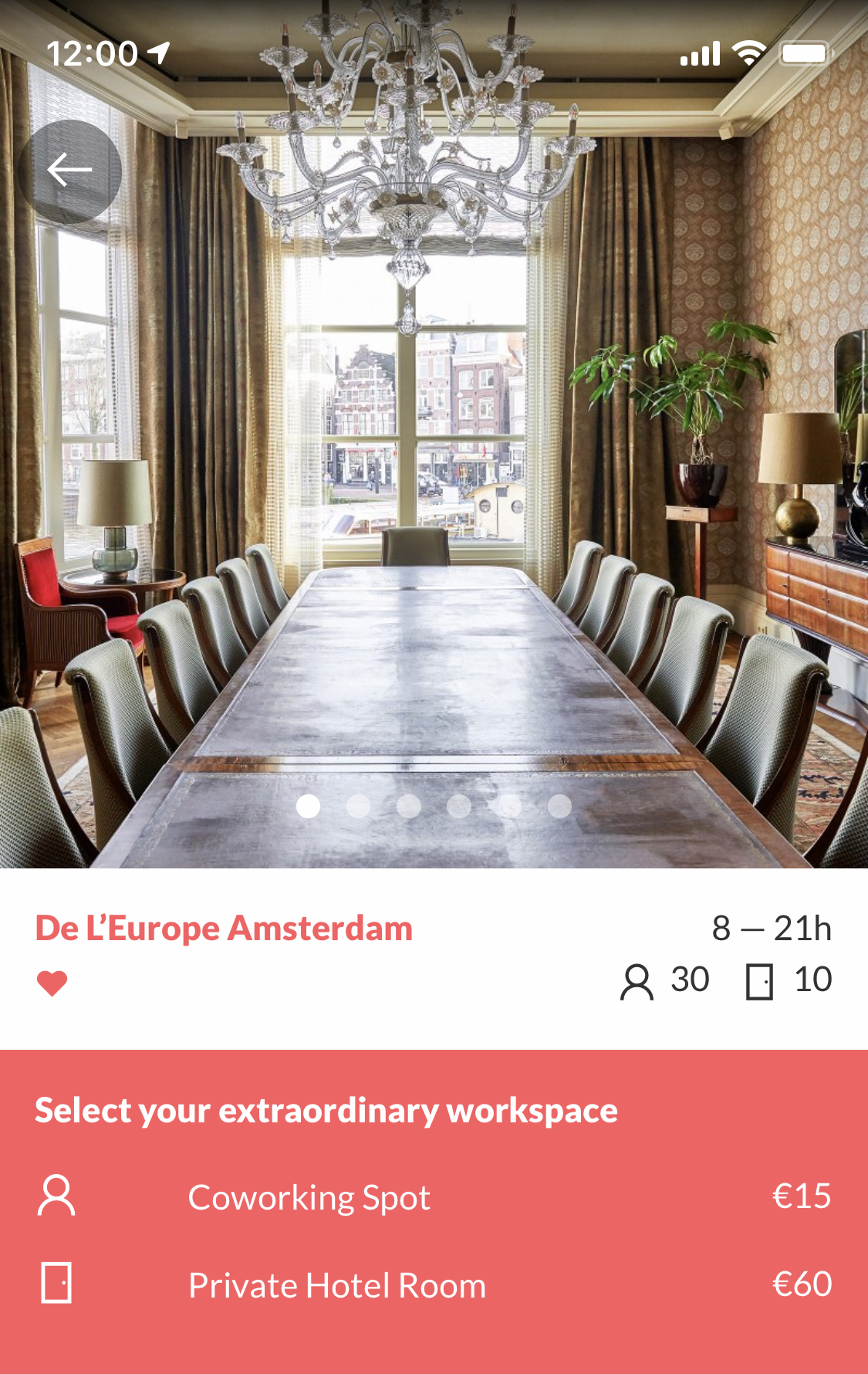 Everybody works differently and workspaces should adapt to that

So, now that lockdowns have somewhat eased and people are able to return to the office part-time or in shifts, how should the workspace adapt in the near future to accommodate workers while securing their safety? Beijen doesn’t believe in implementing all kinds of strict rules and regulations. ‘People are extremely aware of the dangers that come with the current situation, and as an employer you should trust that they act accordingly. Employers risk rushing into getting their employees back into the office, but it’s important to really listen to them and pick up on their needs. Everybody works differently and workspaces should adapt to that. Architecture should be responsive. Instigating fear with warning signs isn’t the solution for a safe workspace.’

Messori agrees and believes we should ‘transform fear into fun’. And to do so, trust is paramount. ‘Human beings are adaptable. It quickly became part of our instinct not to shake hands and to wash them regularly. Currently we see all these ridiculous solutions popping up on the internet, turning offices into plexiglass-partitioned cages. For years we have been creating offices that are good for people — places of happiness, freedom and engagement. Why should we now go back to building offices that control people? We should give people the freedom to interpret their spaces.’ A small step towards thinking more positively about corona-proof workspaces is by changing the way we talk about the virus regulations in general, he believes. ‘The wording “social distancing” isn’t right. We should be talking about social connection and physical distancing instead,’ he said.

The wording “social distancing” isn’t right. We should be talking about social connection and physical distancing instead

One of the industries that’s doing a particularly good job in adapting itself to the new normal is hospitality, thinks Messori, referring to the large number of delivery-driven concepts in his home base. It inspired his company to build a bridge between work and hospitality, resulting in the launch of start-up MEOW – My Extraordinary Workspace, an app that enables professionals to book the most impressive hotels as unique places from which to work. It shows that there is an opportunity for workspaces to pop up anywhere.

Continuing the idea that ‘remote’ isn’t synonymous with ‘at home’, Thiemann steered the conversation towards the concept of the distributed and decentralized office, which could eliminate the need for massive headquarters and daily commutes. We’ve already signalled a rise in satellite co-working spaces that serve the OOO workforce, and the COVID-19 crisis could accelerate this growth even more. Beijen agrees that work will become more local, but sometimes people need to get out of their houses. Workspaces will therefore be more and more dispersed across spatial typologies.

Messori mentioned that since the start of the pandemic, the term ‘gated community’ came to mind — in the sense of small neighbourhoods or tribes that take ownership of their own systems again. He thinks it’s important to no longer think of people solely as users, but as active individuals instead. During the crisis of 2009, his team already started thinking about ‘lobal’ concepts, as opposed to ‘glocal’. It refers to the idea ‘think local, act global’, he explained – ‘communities that can take care of their primary resources locally yet share knowledge globally’. Today, D/Dock is also thinking in business communities — places that combine and blend all kinds of functions like living, learning and working.

The blurring lines between the home and the workspace will also impact the design of these spaces, thinks Beijen. ‘The office won’t be so rigid anymore, but instead more fluid – a mixed reality. There will be a homier feel in the office. These spaces have to have more to them than just company branding.’ At the same time, homes will keep doubling as workspaces, but that doesn’t mean they should be designed like an office. It’s not that black and white, but more holistic, Beijen explained.

Thiemann concluded that remote working is here to stay. ‘We will continue to use our existing workspaces but to a lesser degree,’ he said. ‘We will visit the office for meetings and team get-togethers, but the actual work will be done more and more from home. Herein lies an opportunity for furniture manufacturers to start producing ergonomic pieces with a homely feel. We will also see the office pop up in various places, closer to people’s homes to reduce the time and environmental pressure that comes with commuting. The office will be distributed and the old-fashioned headquarters will be of a forgotten era.’

Read about more past and upcoming #FrameLive events here.