Circularity is still in the early stages of mass integration – a solar panel here or a waste-reduction programme there – but a fully integrated ecosystem within a large-scale building is a rarer achievement. Recently opened on the banks of the Amstel River, the QO Hotel is a beacon for the future of sustainability in hospitality. Engaging with building materials integrated with smart technology and scaled-up circular engineering processes, the QO is identifying how a hotel can move to shift the market that surrounds it rather than working within standardized wasteful practices. 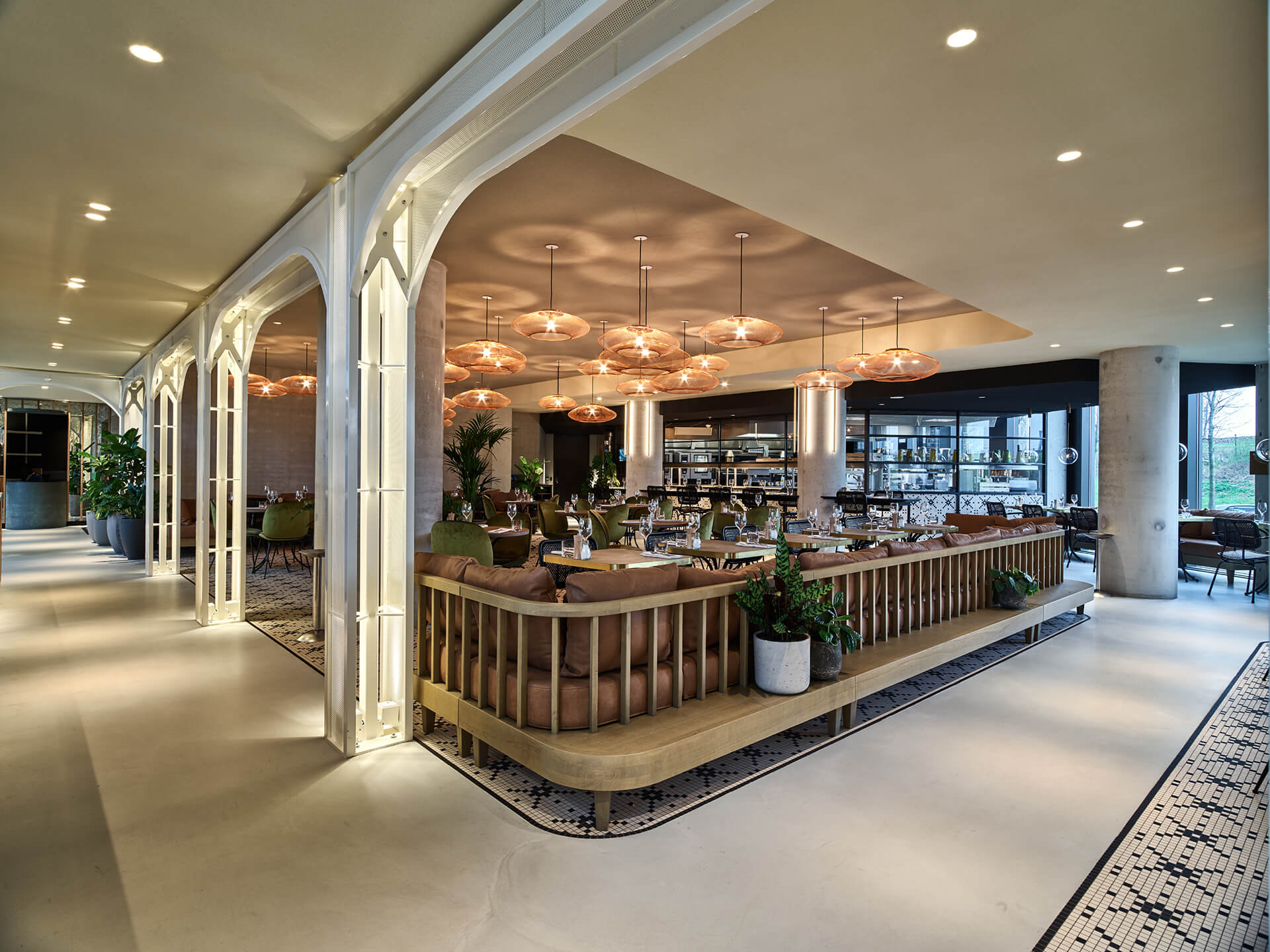 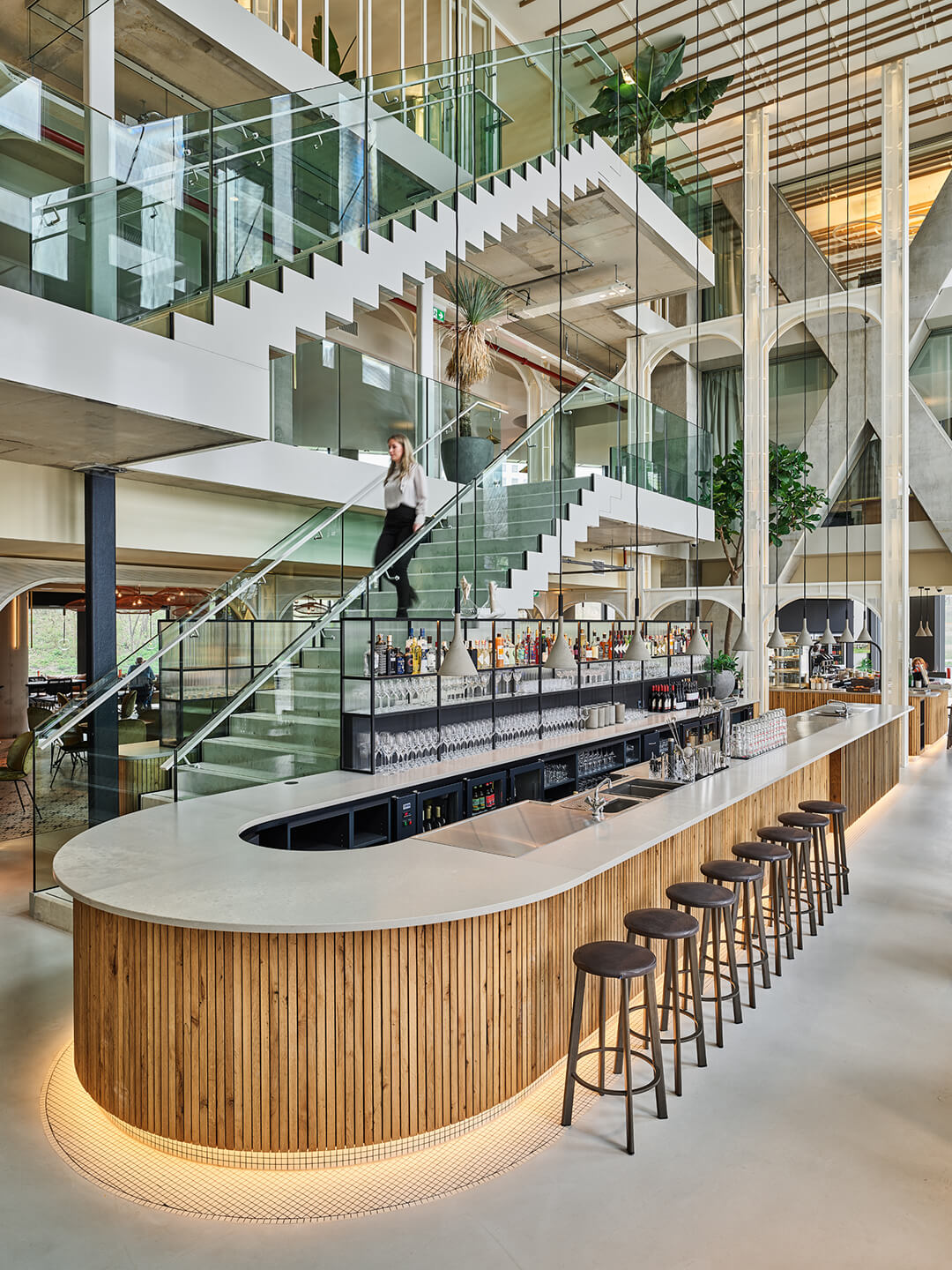 In collaboration with Paul de Ruiter Architects and Arup, Mulderblauw took the lead in developing the circular sustainability concept of the QO. The exterior of the hotel is clad with responsive aluminium panels that automatically create the optimal atmosphere for guests, adjusting the amount of natural light and insulation in guests’ rooms and in the shared common areas. The energy-considerate façade is just an introduction to the measures of biomimetics occurring within the QO. Along with a greywater system and an underground hydropower storage infrastructure, the hotel has also installed an aquaponic greenhouse on the roof. Aquaponics approaches food cultivation as an ecosystem: the QO greenhouse keeps fish, and their waste is used to deliver nutrients to the soil feeding the fresh vegetables, fruits, herbs, and edible flowers, while the plants in turn clarify the water for the fish. Both the produce and the fish are then served on the menu of the hotel’s two restaurants: Persijn and Juniper & Kin. 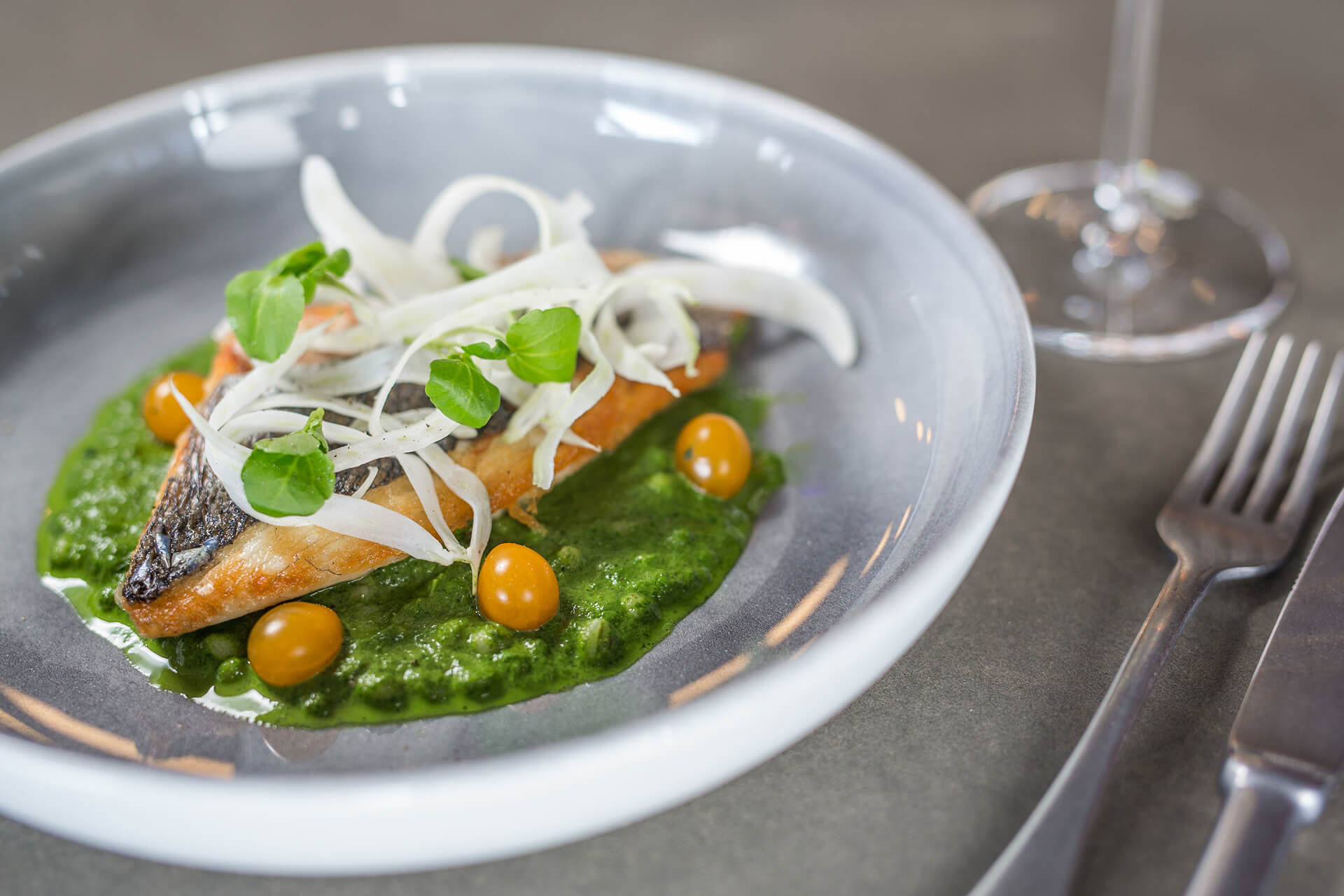 The fish from QO Hotel’s greenhouse is incorporated into the menu of Persijn, along with the vegetables that have ‘fed’ off of its waste. 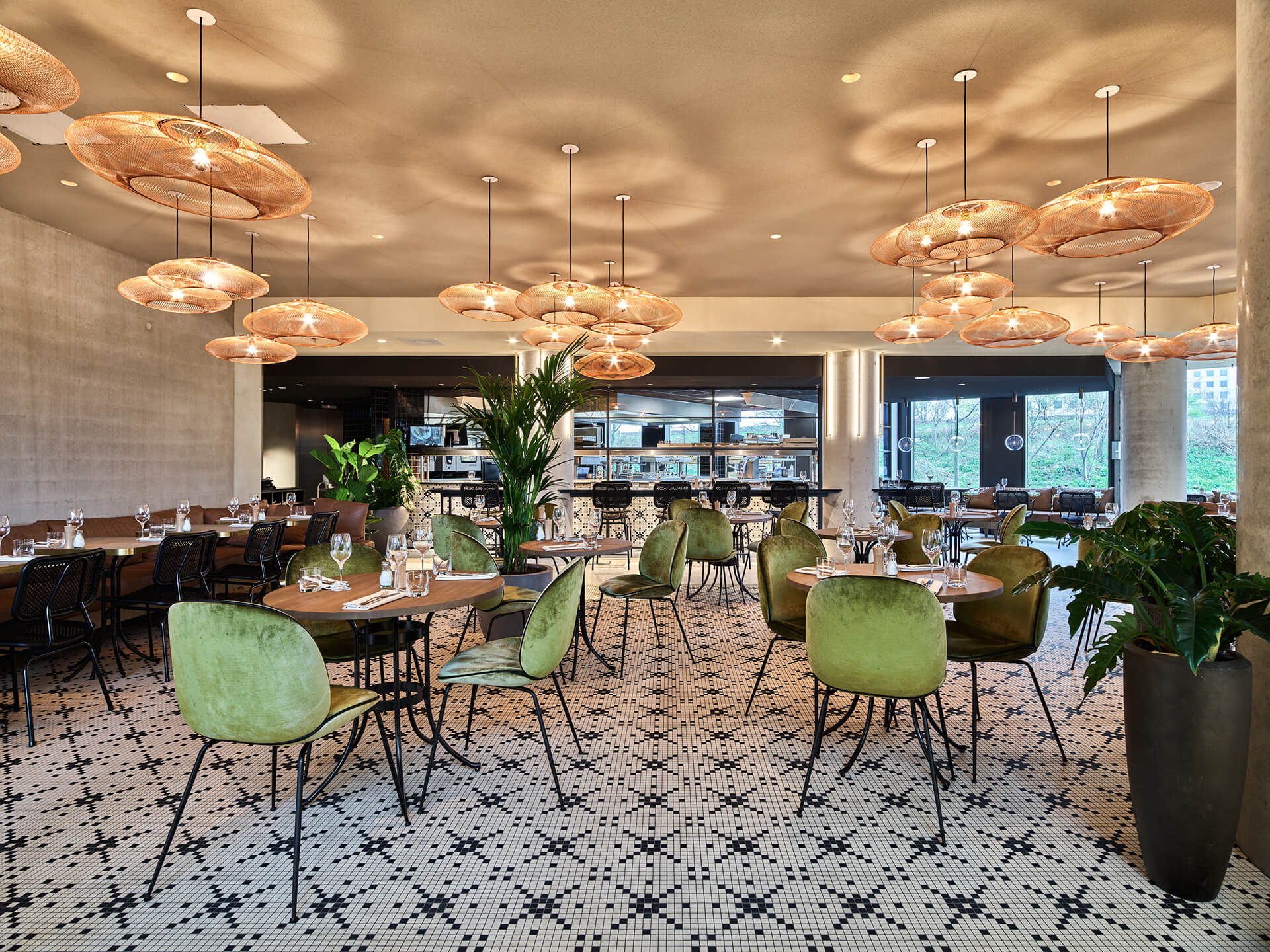 Meanwhile, the interior of the restaurants and of the hotel’s common areas have been designed by architectural studio TANK. Without referring to the hotel’s dedication to circularity as a gimmick within the design, TANK instead produces contemporary spaces that use materials and design objects that also relate to the process of sustainability. Persijn, located on the ground floor of the QO, features an expansive timber-slated bar backed by two climbing glass staircases. The bar as a central feature is bordered by two sitting areas. One with velvet chairs and banquettes in pale greens and pinks alongside brass-edged tables and brass pendent lighting, and the other with a patterned black-and-white tiled floor set with olive green seating and warm wood tables illuminated by copper-woven lighting. The second restaurant, Juniper & Kin is located on the 21st floor and offers panoramic views of the Amstel, welcoming guests into a multi-textural environment of velvet, brass and wood. 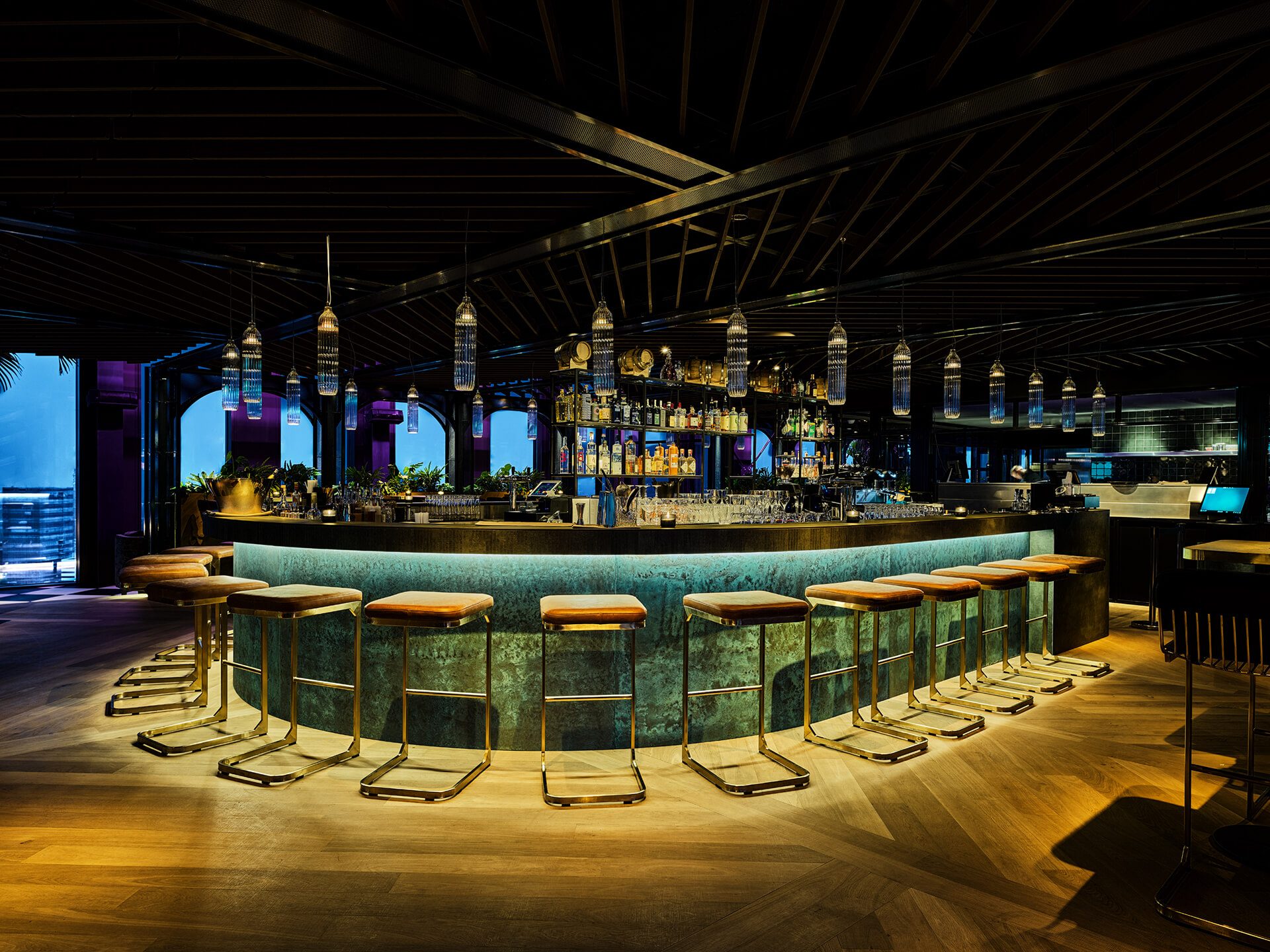 The QO Hotel invites guests to engage with circularity in a holistic way that encourages other large-scale buildings with a hospitality angle to do the same.