At the helm of kukka’s London and Tel Aviv studios as founder and lead designer, Rona Meyuchas-Koblenz conceives designs which are incited by the creative stimuli she encounters at every turn. Whether its a new process, technology or a seemingly small detail such as a hinge or a connection, the Milan-trained and London-practiced Israeli designer is definitely an inspired observer of her surroundings. 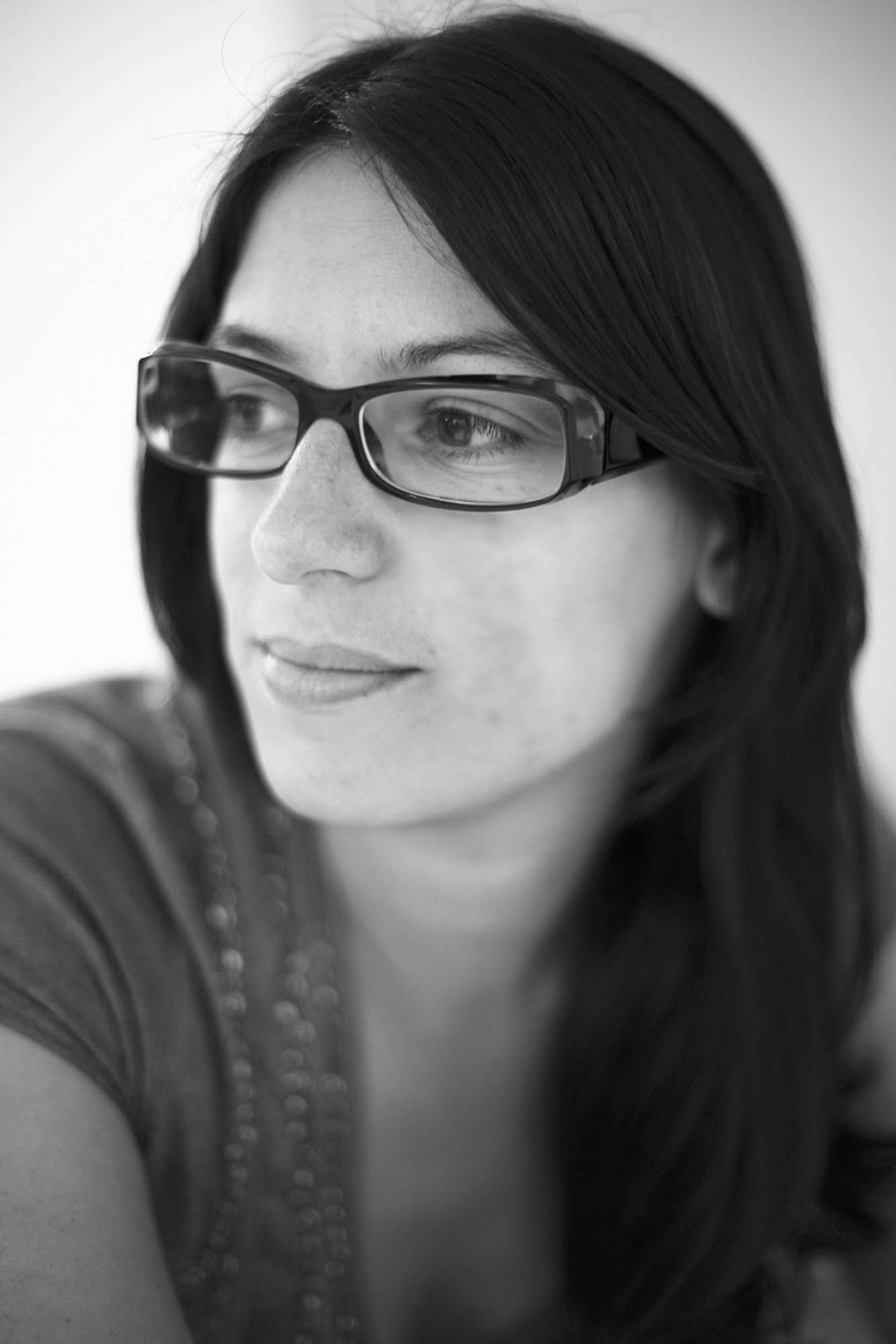 The multitude of creative sources which can inspire Tel Aviv-based designer Rona Meyuchas-Koblenz directly influences the multi-faceted portiolio of products made by her studio, kukka. Portrait Toby Summerskill

'I’m always curious, I’m not going out and searching for a specific thing,’ says Meyuchas-Koblenz. 'Whether I find a new material or even see my kids playing, it inferences me in some way. I’m not trying to convince myself to innovate. But once something clicks in my mind – and is interesting to do – this is what gets me going. There isn't a rule, it can be something I saw or experienced throughout the day.' This flexibility in the source of her inspiration has prompted a multi-faceted portfolio of products which span from small to spatial scales.

One of the designer's most passionate examples emerged from a serendipitous stimulus during a stint designing custom luminaires. Afterwards, a piece of the dichroic glass – which normally serves as an optical filter in front of a lightbulb – then lay dormant on her desk for years. That is, until the specimen's spectral and transparent qualities stirred the designer’s creative juices into developing an experiential object. Meyuchas-Koblenz confirms: 'Dichroic materials are something I’ve been planning to use for about fifteen years. What was more interesting for me was the behaviour of the material with its surroundings. Wherever you put it, it behaves differently because it is absorbent and reflective. It’s very dynamic, from different angles it reflects diversely although the light is the same.’ 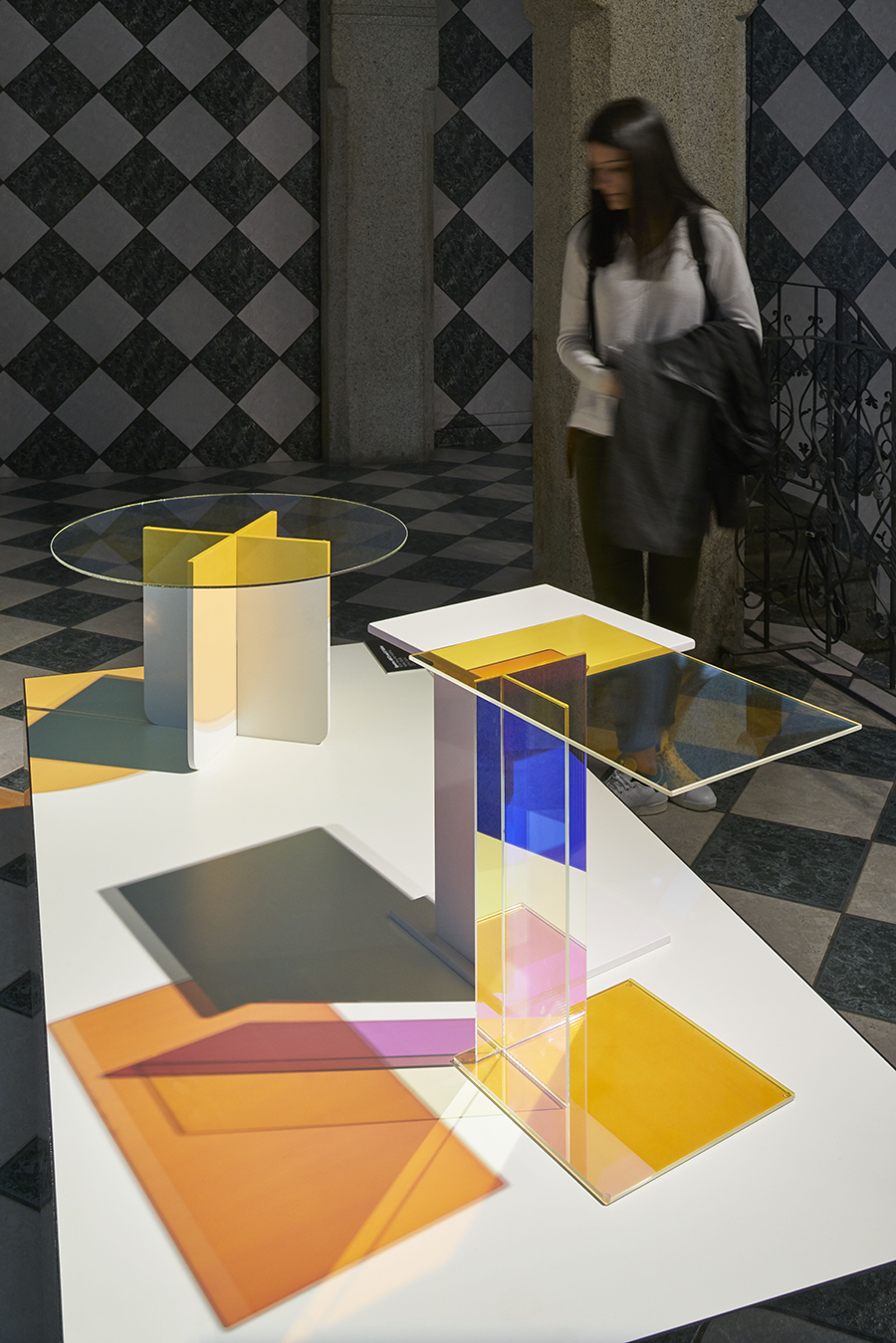 The ABCD and O tables made their dazzling debut at Frame magazine's What's the Matter? exhibition in Milan. Photo Alberto Ferrero

The culmination of Meyuchas-Koblenz's intentions officially debuted at Frame’s What’s the Matter? exhibition during Salone del Mobile 2016 as the ABCD and O Tables. Made with dichroic glass by Prinz Optics and white quartz by Caesarstone, the bespoke coffee tables were realized in two variations. The ABCD tables come as a pair with an all white quartz table which sits alongside a delicate iteration crafted solely with dichroic glass. ‘The idea was one affects the other which in return gets something. What is interesting is to see the dialogue between them, almost like the perfect couple,’ explains the designer. 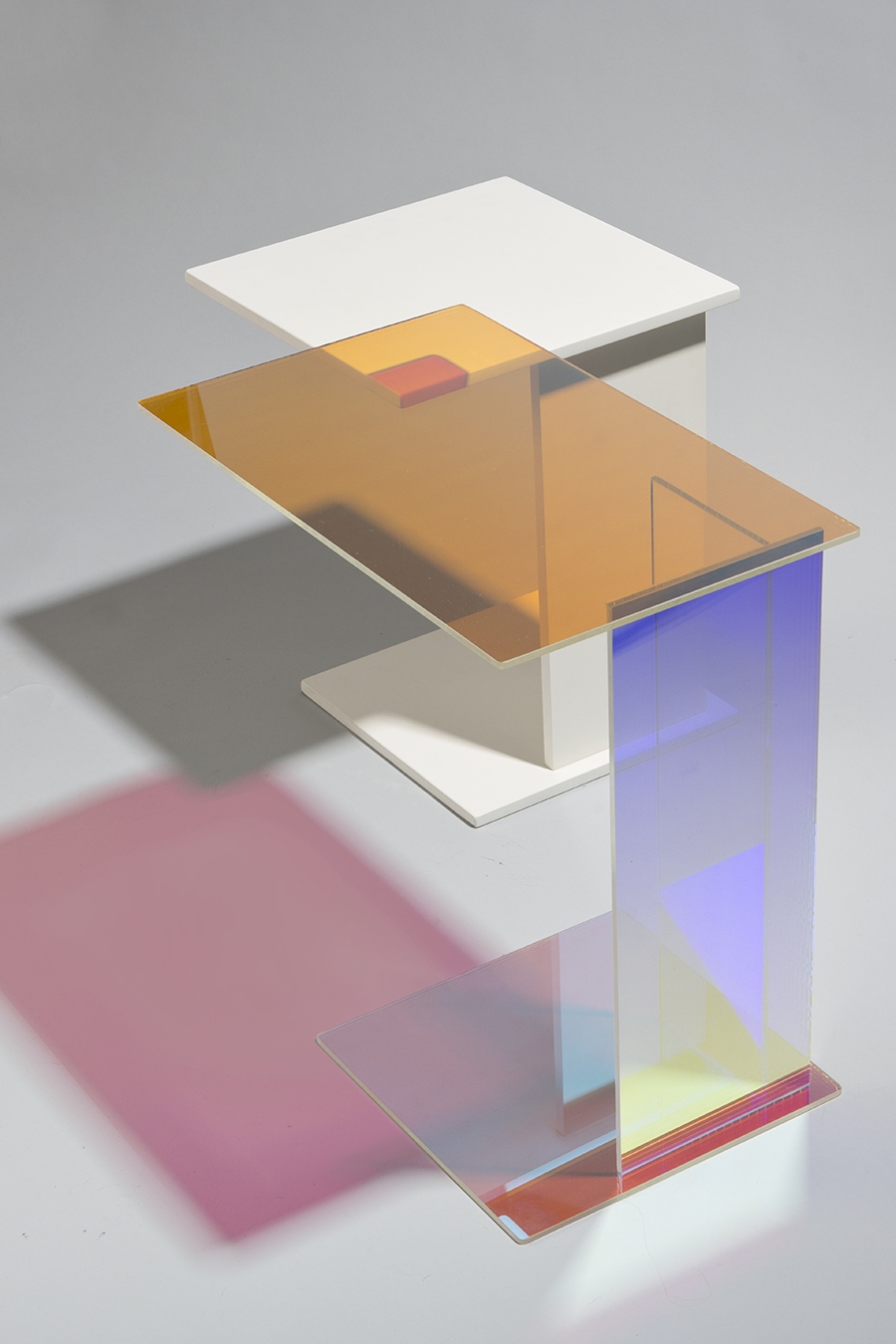 For the O Table, a circular dichroic glass tabletop sits atop a sturdy, criss-crossed quartz base. Kukka’s founder explains: ‘Each material needs the other one for it to be recognizable. The shape is very basic and we didn’t use any joints or screws.’ As a result of the ethereal combination, ’the colour of the glass table is reflected on the quartz to look almost printed.’ 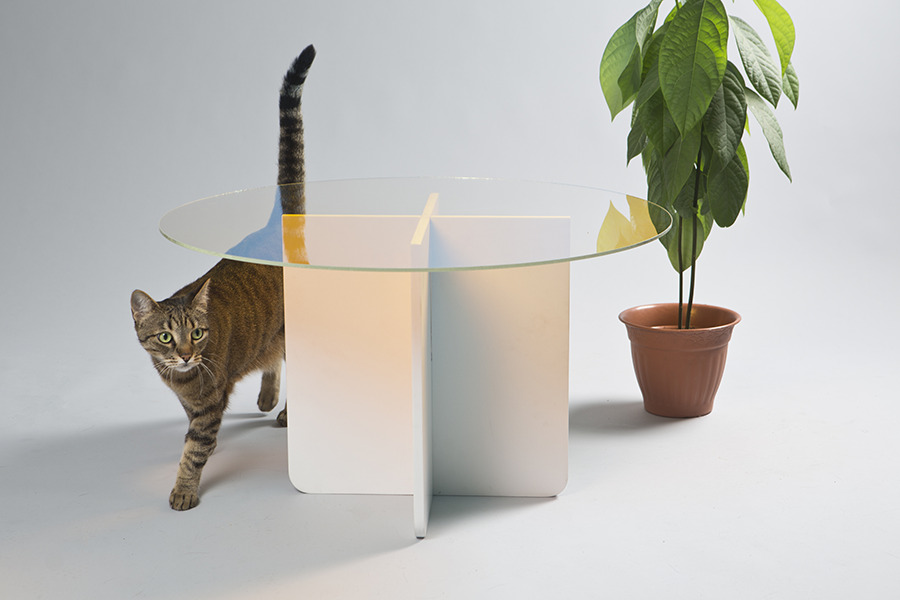 Another recent instance where Meyuchas-Koblenz’s surroundings informed her design direction took place just this summer at Domaine de Boisbuchet, where the designer gave a workshop entitled Illuminating the Woods. ‘The main thing that attracted my attention is it’s amazing setting. There’s 600 acres of forest, it’s right in the middle of nature,’ says the designer. 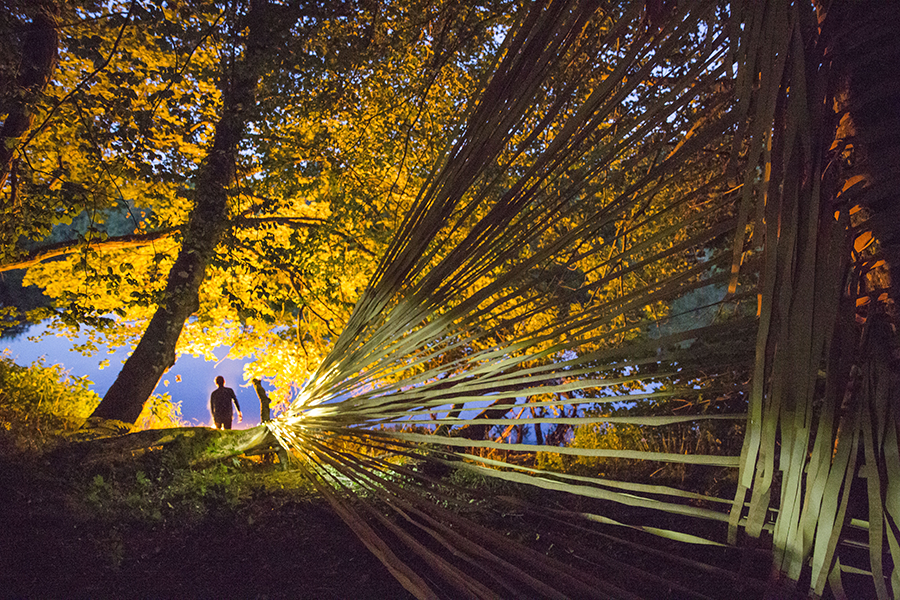 The workshop’s participants handcrafted light fixtures with natural materials by Portuguese company Amorin Cork and powered by wind or solar energy. ’It was interesting to me to do something that relates to the forest without touching it and is sustainable. Each will create a lantern but all together we will create a path. Something that leads us in and out of the forest, like natural fireflies. 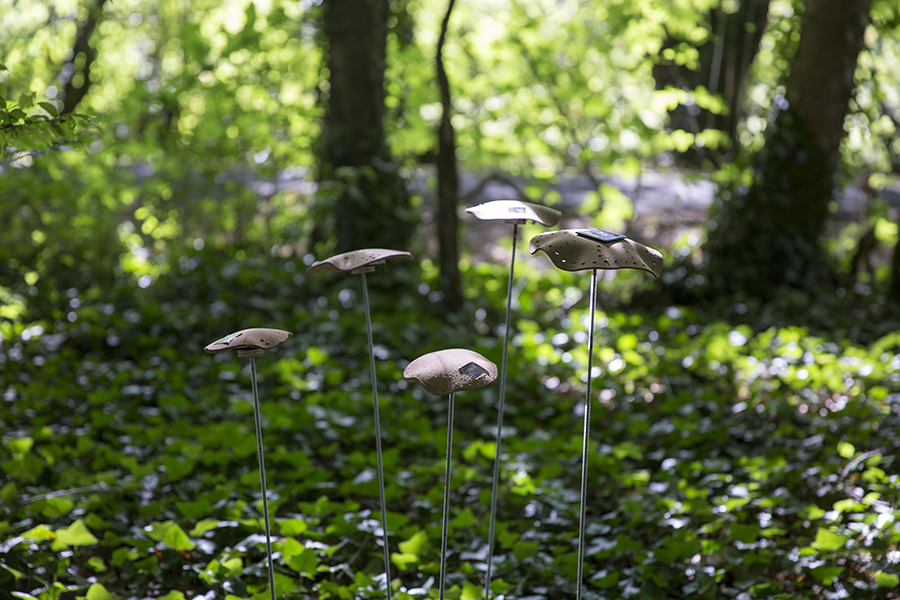 ‘I let things happen. It really comes from who I am,' says Meyuchas-Koblenz. 'Everything else, what I’ve learned in school and the experience I’ve gained over the years just become my tools. Since I’m not an artist but a designer, whatever I’m doing always finds a use. It's a product, something well thought out.'

For further depth on the topics which interest Meyuchas-Koblenz, join a discussion led by the designer – curated by the Design Museum – which will delve into design's direction in the Middle East. Designers in the Middle takes place during the upcoming London Design Festival at 100% Design on 24 September at 11.00am.