You might have seen the striking photos on Instagram, caught a glimpse of the popular tote bag around town or heard the buzz about the overall soothing vibe inside the location. The kicker, though, is that one of the most talked-about installations during this year’s Fuorisalone came from a Milan newcomer, and an unexpected one at that: a vinyl flooring company.

Tarkett certainly took to heart the fact that you don’t get a second chance to make a great first impression. Formations, the installation they conceived alongside Note Design Studio, is a case study in checking every box – and then some – with both efficiency and gusto. We sat down with Tarkett art director Florian Bougault and Note’s Daniel Heckscher to discuss the steps they took to ensure the outing made a splash – and what other brands can learn from their strategy.

[1] RETHINK THE HABITAT OF THE PRODUCT

For decades, the natural habitats of Tarkett products were the hospital and the school, high-traffic places that needed quality, easy-to-clean and usually self-effacing floors. But Bougault kept dreaming of a second life for the material. What would it take for it to enter the luxury retail and hospitality sectors? Installers were already familiar with the product lines and their durability, but was there something that could attract architects directly?

It took some convincing inside the company, but the answer came in technicolour, as Bougault came up with modular collections that quickly caught the eye of many an interior designer – the iD Mixonomi, for instance, won the Red Dot Award for Product Design in 2017.

The takeaway: Is there a sector that is unaware of your product’s properties? Think of what it would take to target them, production-wise. 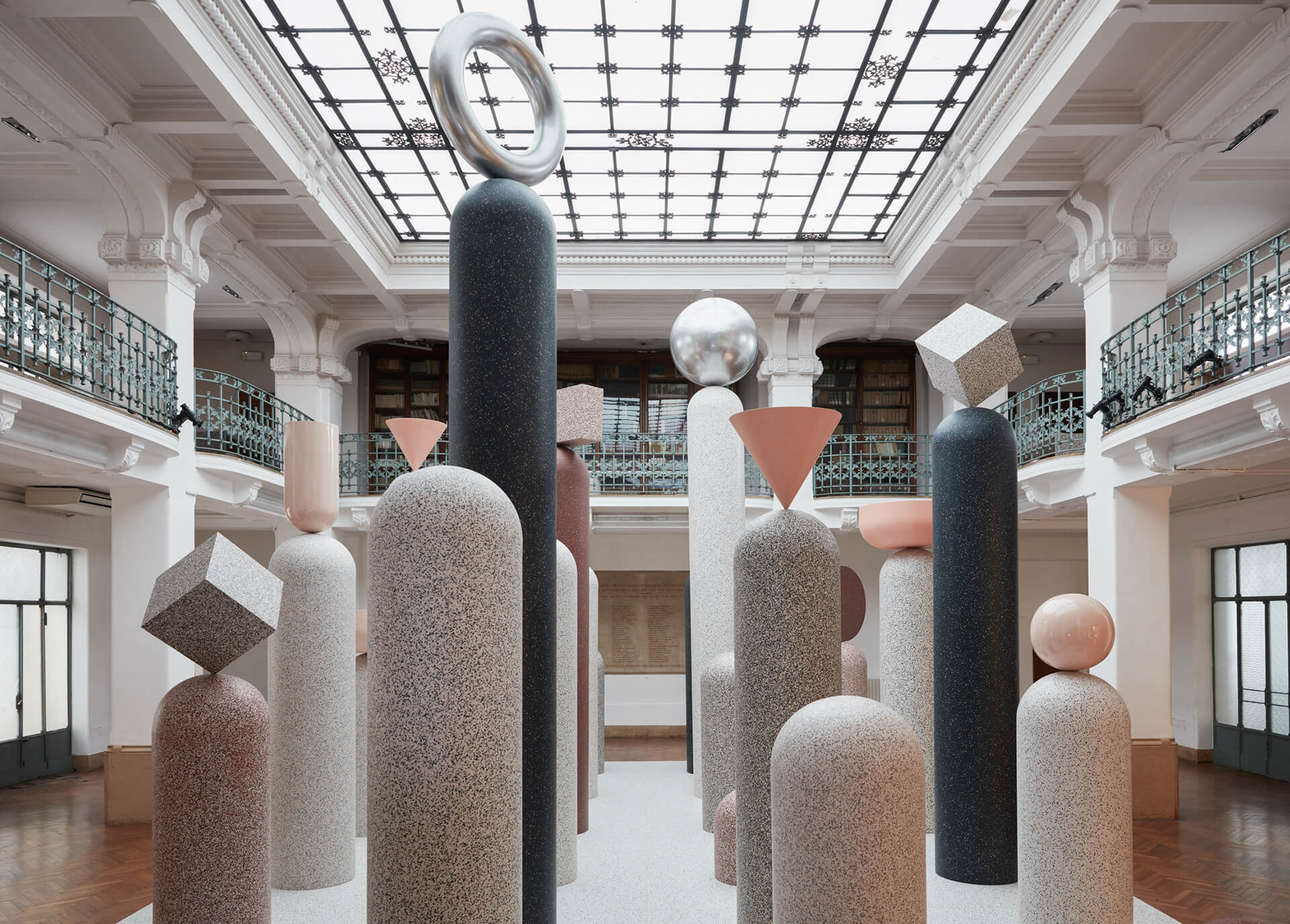 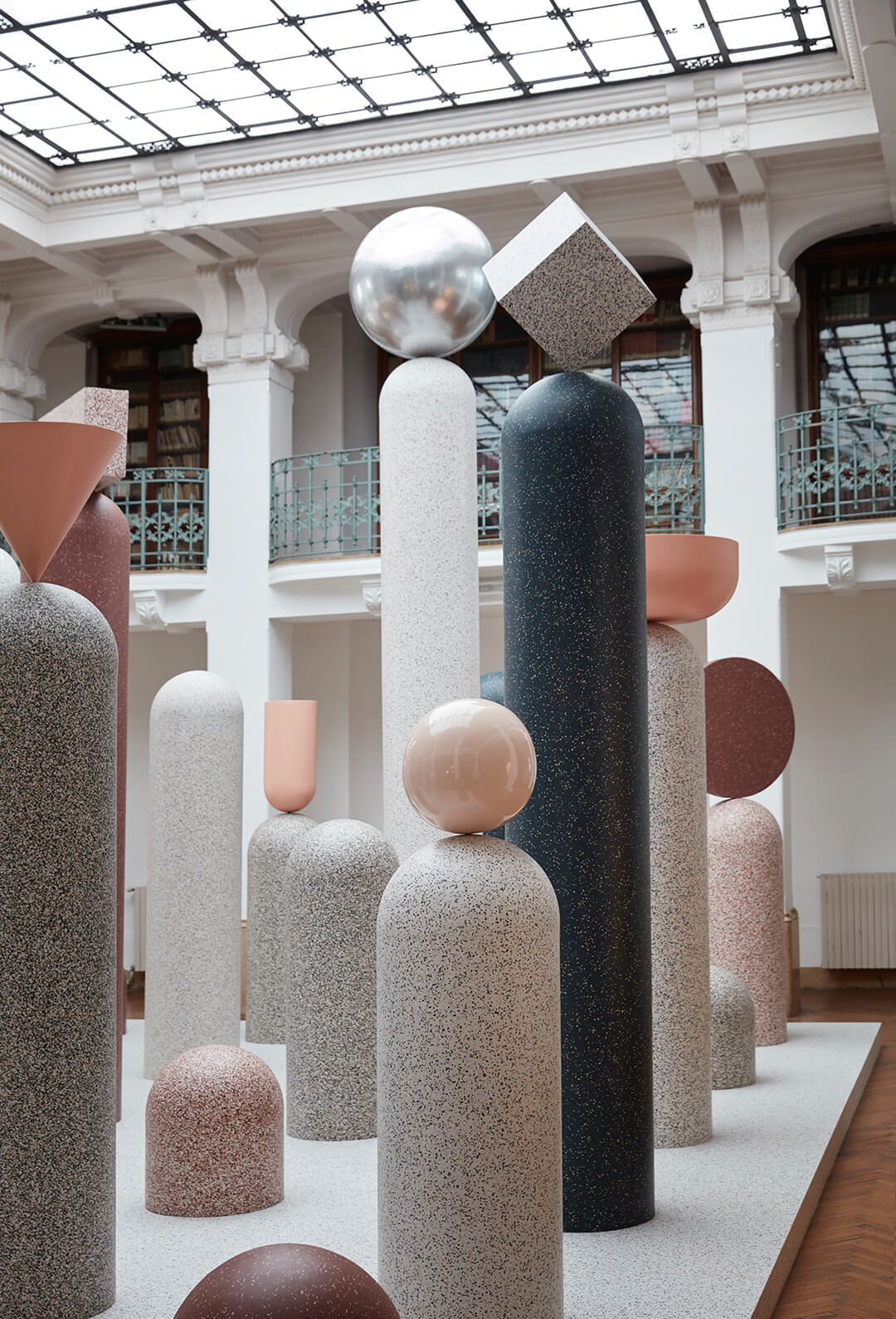 [2] MOVE THE PRODUCT TO A NEW AXIS

For its newest collection, the playful terrazzo-like iQ Surface, the company enlisted the help of Swedish polymaths Note Design Studio – it was the first time in its history that the company had brought along external designers in such an extensive way. That gave both parts the luxury of conceiving the pieces together, and thus from the inception imagine the ways in which it could be used. ‘So we figured we should design a product that one could eventually dress a room with it,’ explained Bougault.

‘We were so naïve, stubbornly asking for specific colours and certain types of overlapping, not knowing how the material was actually pressed and rolled, but somehow the technical team made it work,’ laughed Heckscher. From that liberating process onwards, the partners stopped thinking of the Surface as a material that should only lie horizontally, but instead function as a live element that could grow vertically, give way to multiple shapes and even serve to construct furniture pieces. ‘This product had been overlooked for too long not in terms of functionality, but in terms of beauty,’ added the designer. And with that, having produced a collection innately built for creative expression, came the ambition to showcase it in Milan.

The takeaway: Maybe it’s not a whole new sector, but perhaps a new typology of use. Is there a different way of presenting the product that could open eyes?

But first, a fair booth – they needed to prove the execution would work. At the 2018 Stockholm Furniture Fair, Note took those principles to heart and created The Lookout, a stunning two-level space that featured the flecked pattern of the iQ Megalit used head-to-toe as wall coverings, bleacher-like seating, tabletops, stands, the namesake lookout spot and some impressive curtain-like curved elements. We were so taken with it that, in fact, it was nominated for Best Use of Material at this year’s Frame Awards.

With this and other accolades in tow, they felt they were ready for the industry’s largest podium. But instead, they decided to wait it out. ‘This was a starting point, so taking the Lookout as it was would be to half do it… We felt we had to wait for the appropriate project to take it to Milan,’ remembered Heckscher. ‘And my colleague Cristiano [Pigazzini] told Florian: “If you’re [a big brand] going to Milan, you have to go with a big budget. You cannot half-ass it. If you enter, you need a good budget and a good concept.”’

With Surface’s release, they felt they had the right opportunity to do both.

The takeaway: We can’t really improve upon Pigazzini’s advice.

[Ed’s Note: Do see the follow-up to The Lookout, Snowtopped, one of our favourite installations from this year’s Stockholm Furniture Fair.] 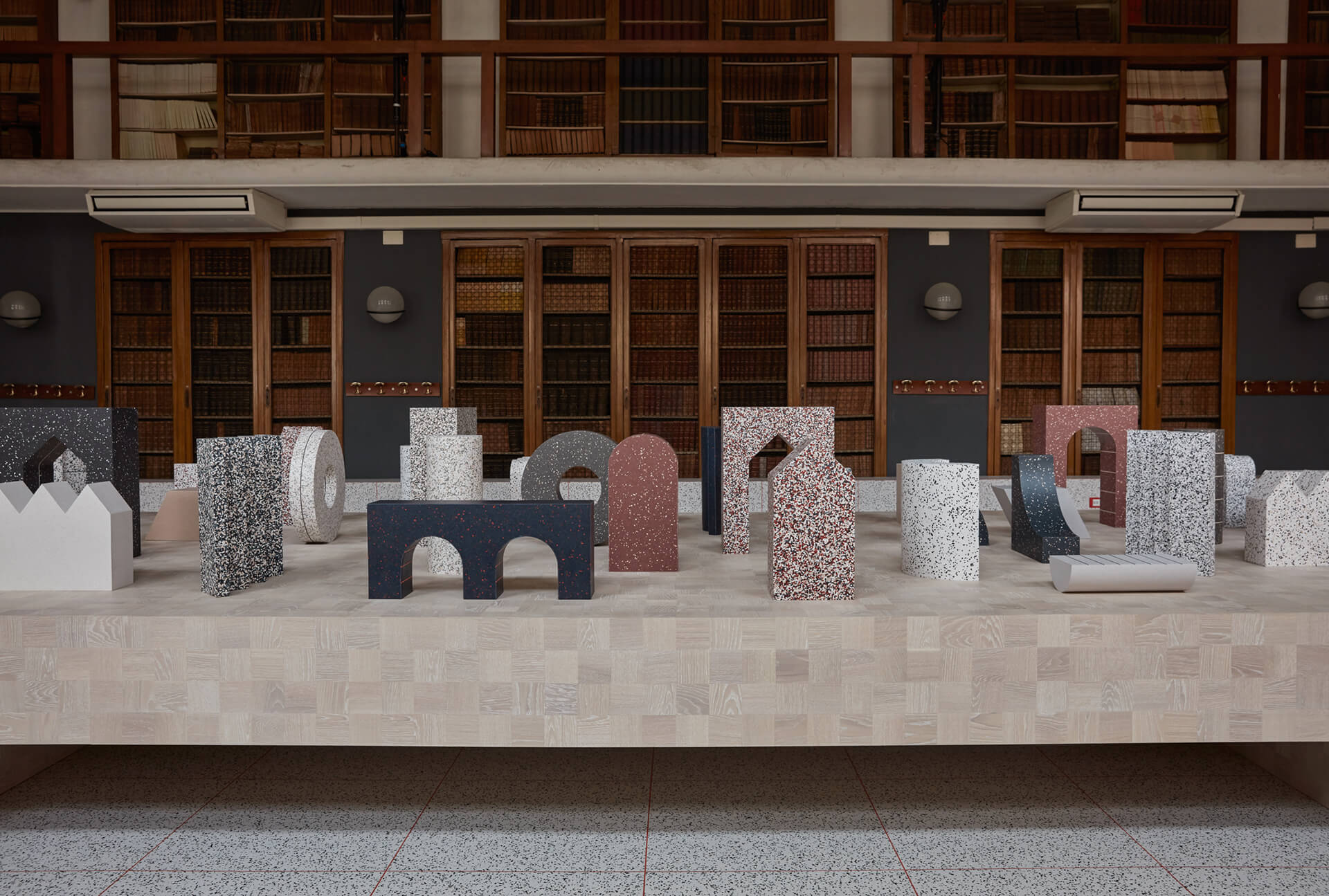 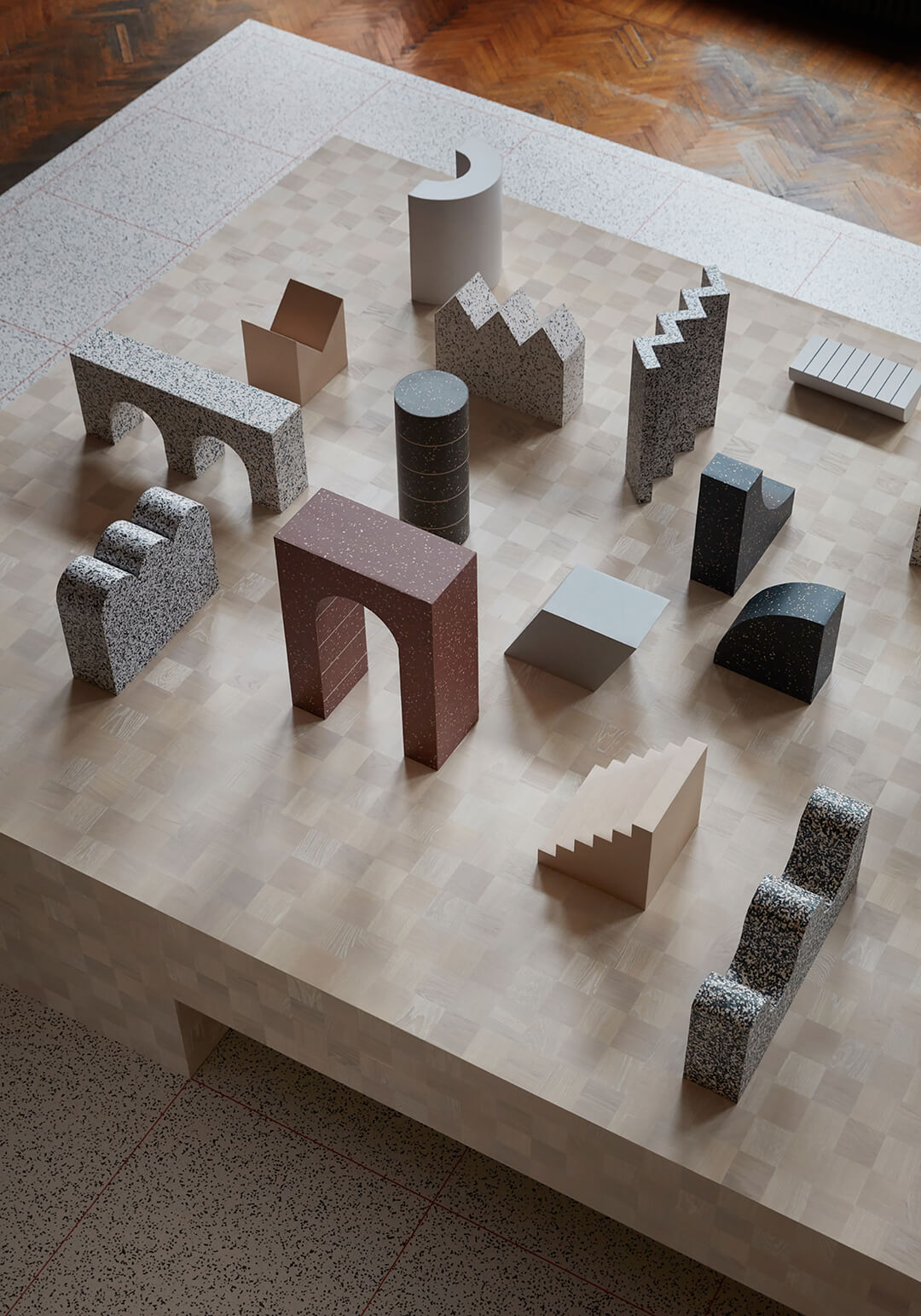 [4] PICK A LOCATION THAT MAKES SENSE TO YOU

The Circolo Filologico Milanese, located at the beginning of Via Clerici, has historically housed the local lovers of language. Coincidentally, Tarkett wanted to lead a crowd of architects and designers through an exercise in new forms of expression – the formation of a novel material language. That was it. Formations was serendipitously born upon a visit to the venue. ‘It was so obvious that we needed to create this alphabet of shapes,’ remembered Bougault. ‘Not a derogatory lesson, showing how it’s supposed to be used, but instead an exploration of potential shapes and volumes.’

So, instead of covering the space to fit the material, they let the building’s personality shine through and resorted to playing with the layout. For example, the Note team used the ground-floor Sala Liberty, where visitors usually seat to look upwards, to house scale-bending vertical objects so that visitors could look downwards from the first-floor balustrade. These unlikely shapes of the totems, featuring some challenging double curvatures, are representations of the technical challenges Surface can endure. On the top floor, the library space features the alphabet itself: on display are more than 20 small-scale experiments in shape and layout that give the vertical waves of The Lookout a run for their money. Other nooks featured curved benches and even bar stands made with the material.

The takeaway: Don’t be afraid to change locations if it means one will work better with a particular concept. Once you do, make sure you let the connection be visible.

Here’s another way in which they upended the traditional use of the Circolo’s spaces. The stage of the Sala Liberty was turned into a relaxation corner, outfitted with Magis furniture, where weary visitors found themselves too comfortable to leave the premises and too enthralled by the calming shades of the totems and the silent peacocking going on among them to consider leaving too soon. In fact, we spoke to many attendants who spoke of 20-minute visits – quite a feat when installations throughout the city are fiercely fighting for attention.

The takeaway: You can catch more flies with calm than with a loud installation. In our experience, the most popular exhibitions this year were the ones that provided overloaded visitors with a sensorial oasis. 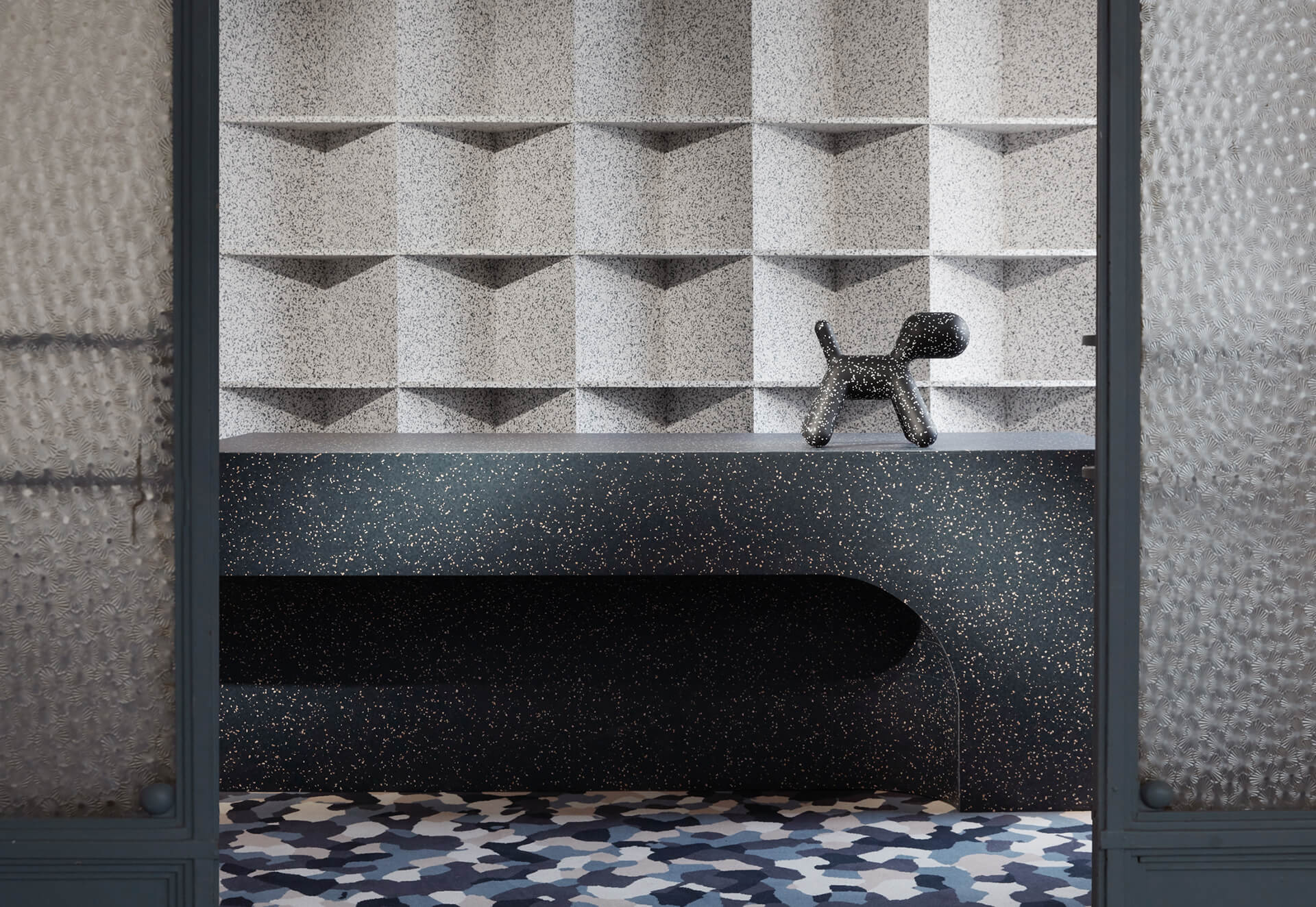 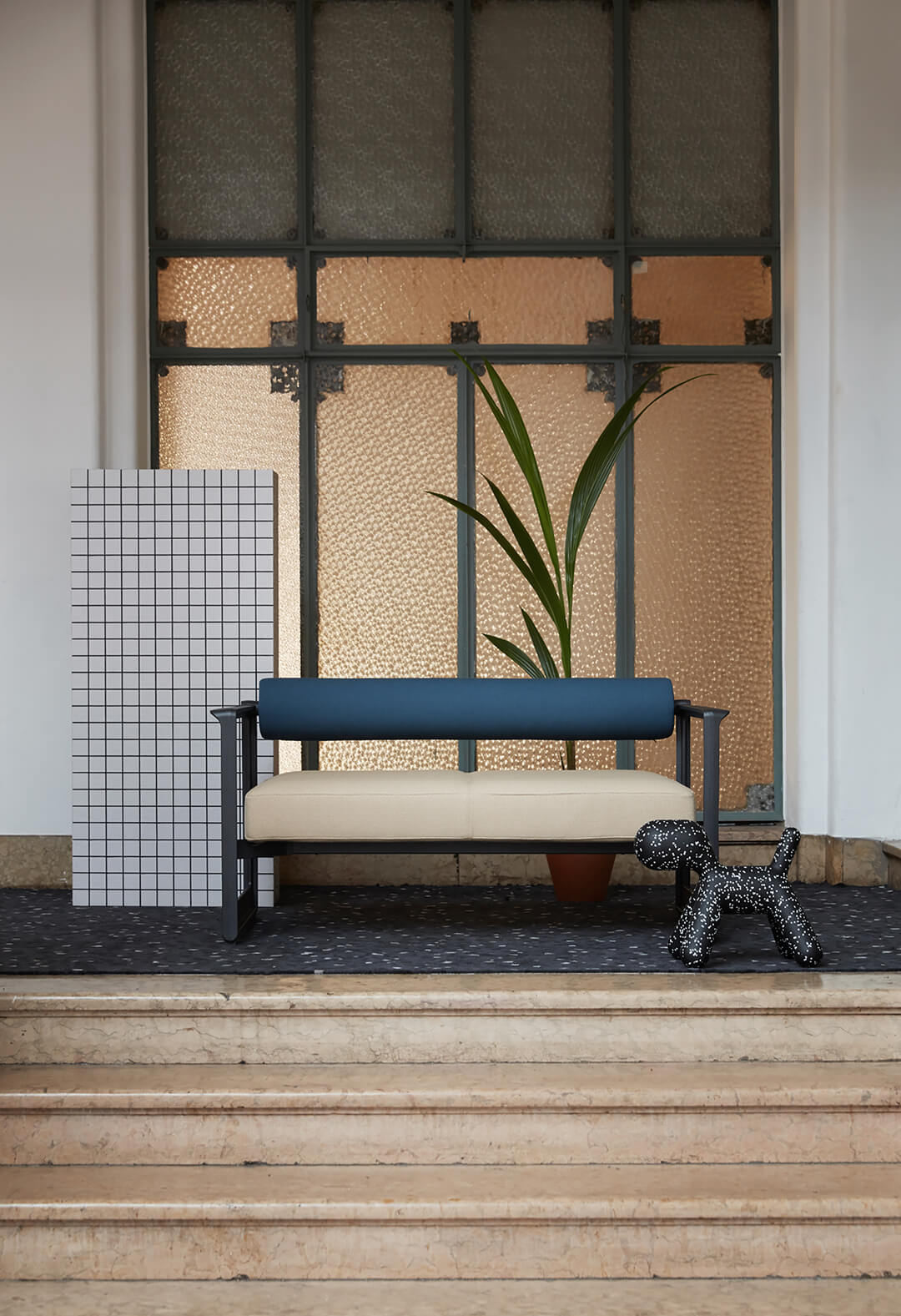 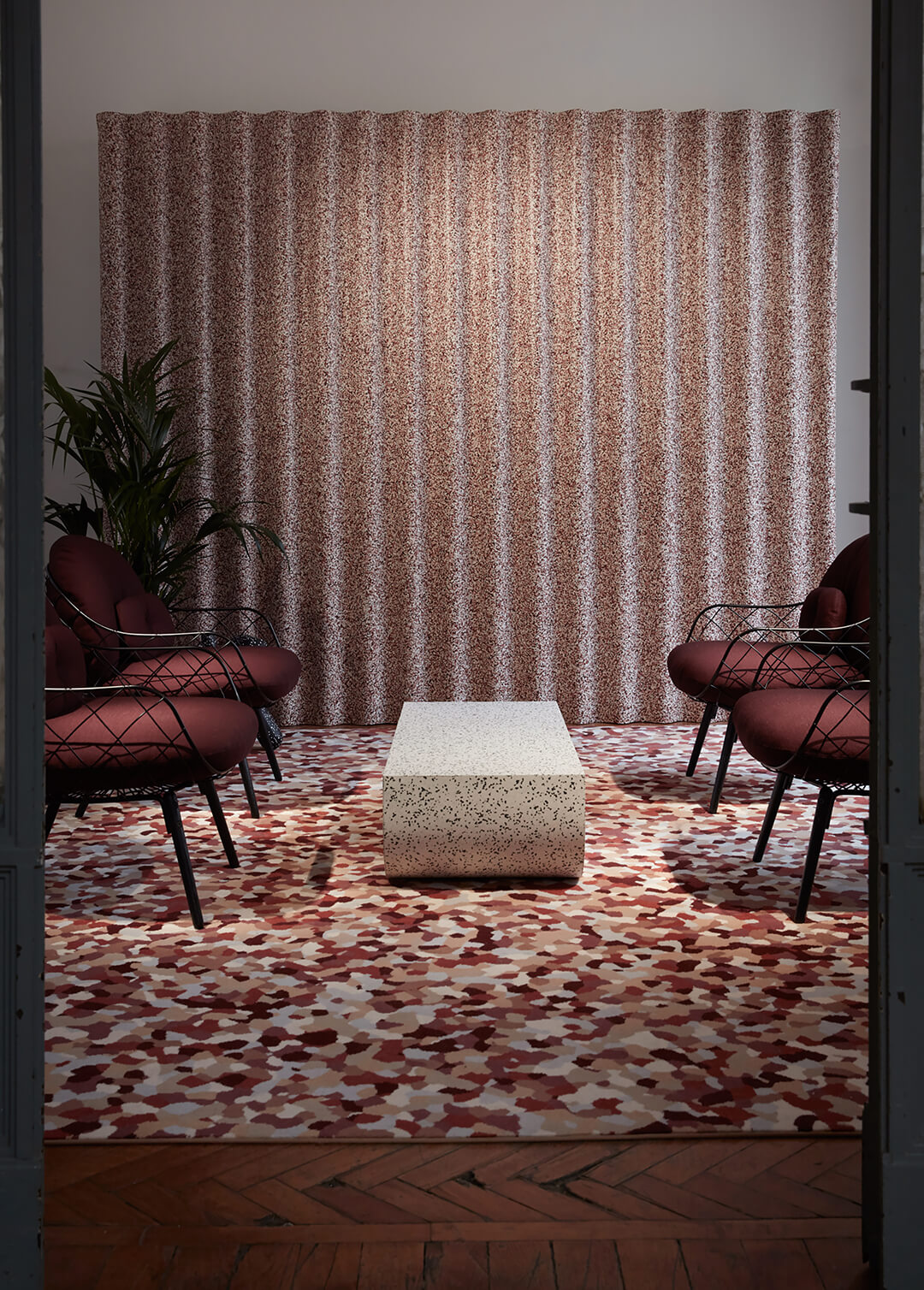 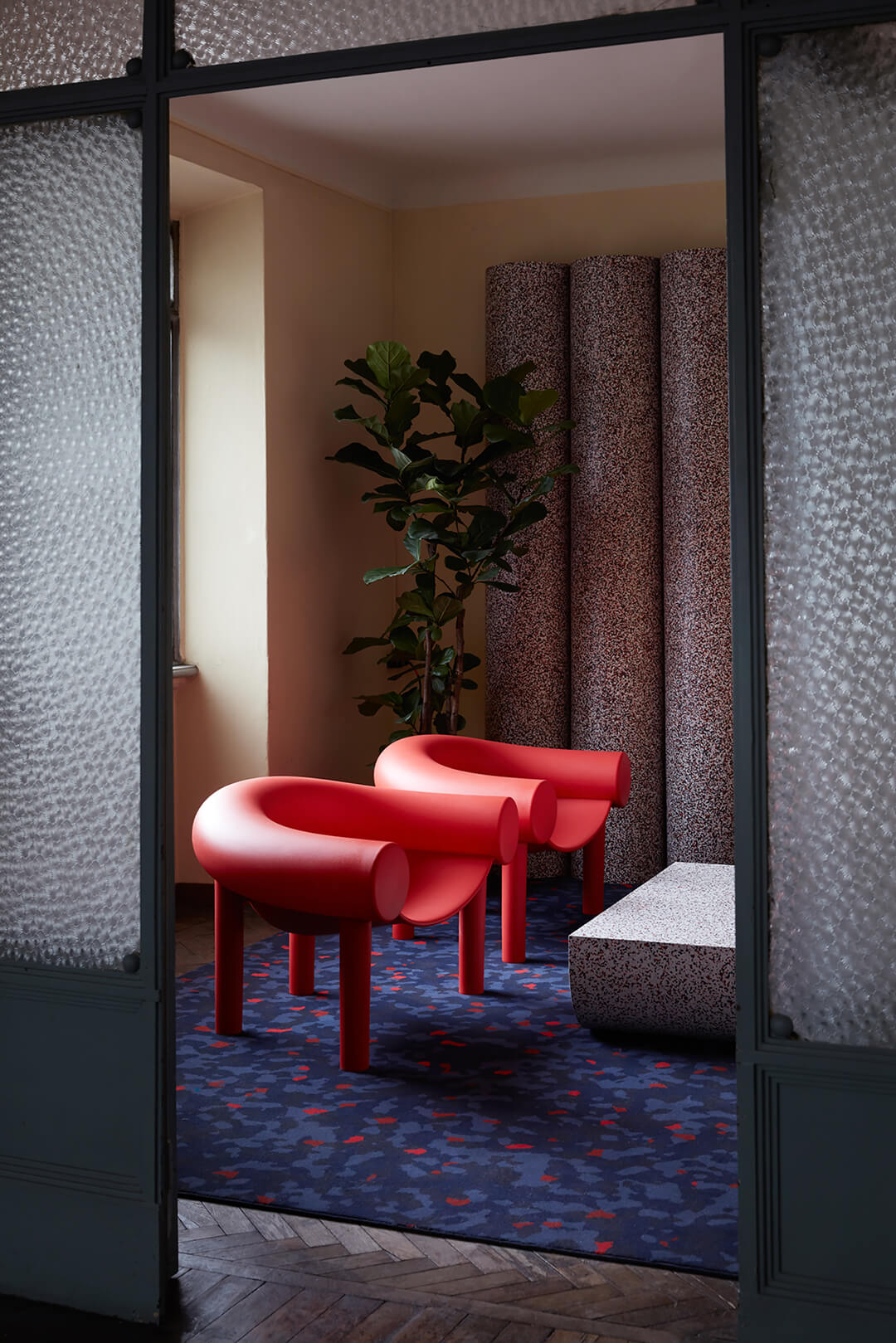 During Milan Design Week, the most desired object in all of the city is not a new high-end sofa, but instead an electrical outlet for charging one’s surely depleted phone battery. As cynical as it sounds, the production team even accounted for that: the Surface-made bleachers in the library integrated a generous serving of outlets. Once word got out, that extended the dwell time of each visitor – and increased the photo-taking potential while at it.

The takeaway: For Fuorisalone attendants, batteries will die and feet will hurt. You should use that to your advantage.

Note is a multidisciplinary studio that works on spatial projects, product design and communication direction. The latter came in very handy, as they found ways to make Formations unavoidable to its target business audience. ‘We wanted to attract more architects and have them prescribe the materials, instead of only the installers… and I’m sure installers don’t use Instagram as much as architects do,’ Heckscher half joked.

They printed out 5,000 tote bags with an enticing, bright-orange font logo – ‘the collection colours are more subtle, but for the bags we used a popping shade that would be visible in the city.’ And visible it was: anecdotically, it was probably the most popular branded tote bag in Fuorisalone. Here at Frame we made it a point to ask the carriers, mostly design students from all over Europe, how they had found out about the exhibition. Most of them told us they didn’t know about the company, but instead ‘followed the cool bags and the photos all the way to Via Clerici.’ Once there, the sheer Instagrammability of the scale of the elements, the possibility of walking through them for posing potential and the application’s geotag functionality did their thing. In fact, go ahead: try any of the Milan Design Week hashtags of your preference and see which installation happens to show up with noticeable frequency. And if you, dear Frame reader, happen to be an architect or a designer, Note’s job is done.

The takeaway: Digital is important, but don’t underestimate the importance of old-school pedestrian advertising – give them something to walk about.

Want to find out more about how the totems were made? Read our piece on Formations in Frame 129, our upcoming print issue.