The creepiest character in the Midsommar movie? It’s the spatial design

Here at the Frame office, we’ve randomly decided that the cutoff date to openly discuss Midsommar spoilers is August 12 — the moment in which summer left Amsterdam and the rain, grey skies and jumper weather returned in full force, thus prematurely ending the season here in the Netherlands. And yet this generally flat and aggressively depressing environment feels safer than the blindingly sunny and chromatically pleasing Hårga, the made-to-measure Swedish village where Ari Aster’s film takes place.

Production designer Henrik Svensson cleverly subverted our ideas of aesthetic symbolism to turn spatial beauty into elements of danger hidden in plain sight — Midsommar’s childlike dorm improves upon The Shining’s Overlook Hotel as a supposedly idyllic building that is turned into an oppressive catalyst of our silenced fears. So yes: the elders and the rituals and the teas are nightmarish, but some of the story’s creepiest villains, made of wood, paint and linen, are hidden in plain sight right from the start.

We spoke with Svensson about the role of spatial design in what is certainly, judging by the amount of popular memes and professional applause, the film of the summer.

Why is the sacrificial temple triangular? I put my Illuminati tin hat on the minute I saw it on screen.
HENRIK SVENSSON: [Laughs] I’m sure you're not alone with that. In general, I started very theoretically, and then gradually became looser to eventually play it by heart — started big and zoomed in. In this case, it was determining the shape of the village and its surrounding land, both of which needed to be built in a — for this world — very strong symbol.

The triangular shape remains from an early draft on the village where the temple was located in a triangular rapeseed field — the rapeseed had, by the way, a huge impact on our choice to go yellow in the film. The look of it fit the overall aesthetic of the Hårgans and I liked it so much that it stuck. The triangle is very powerful in this scenario for a number of reasons, including sacred geometry.

I loved the idea of having traditionally beautiful aesthetics represent darkness 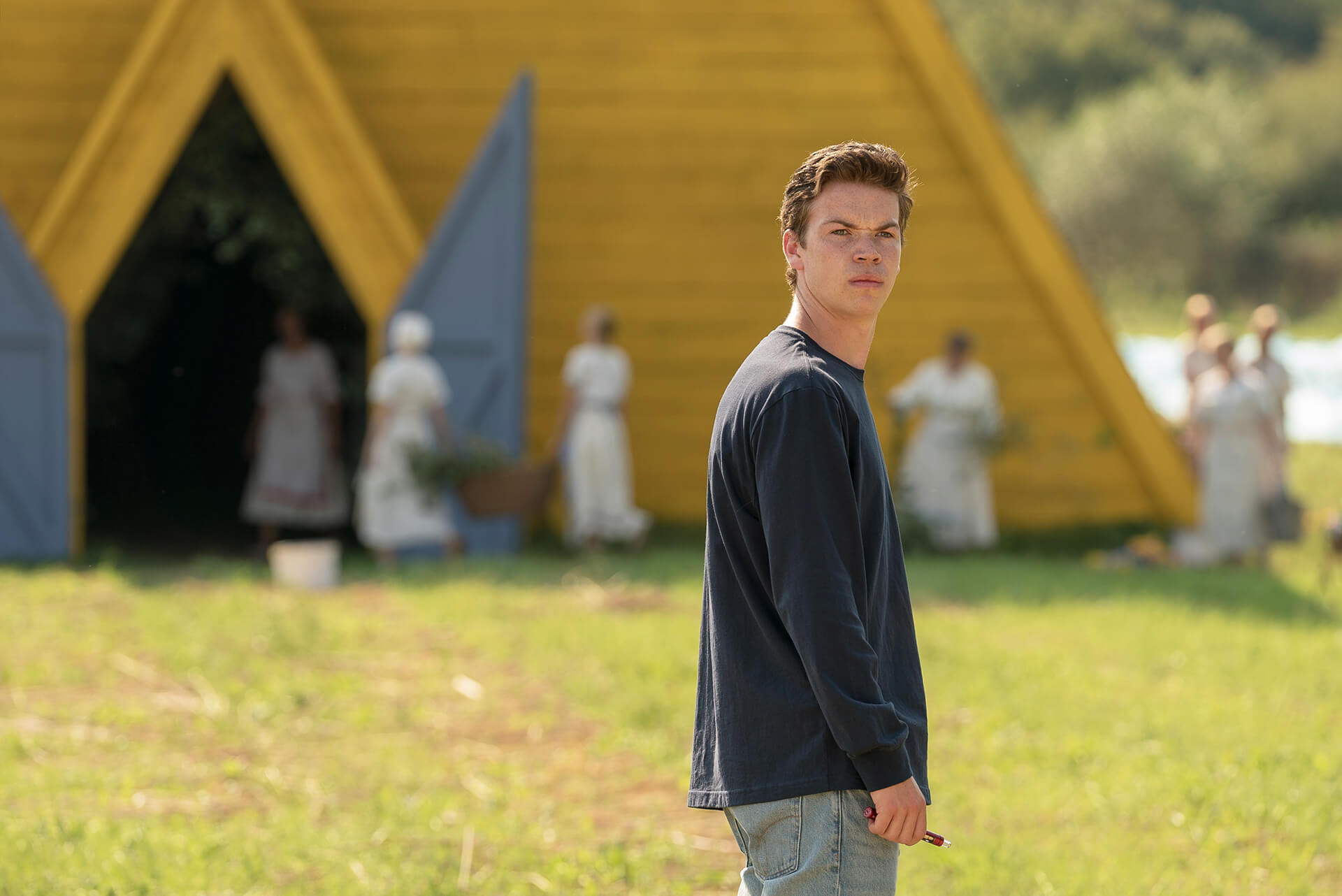 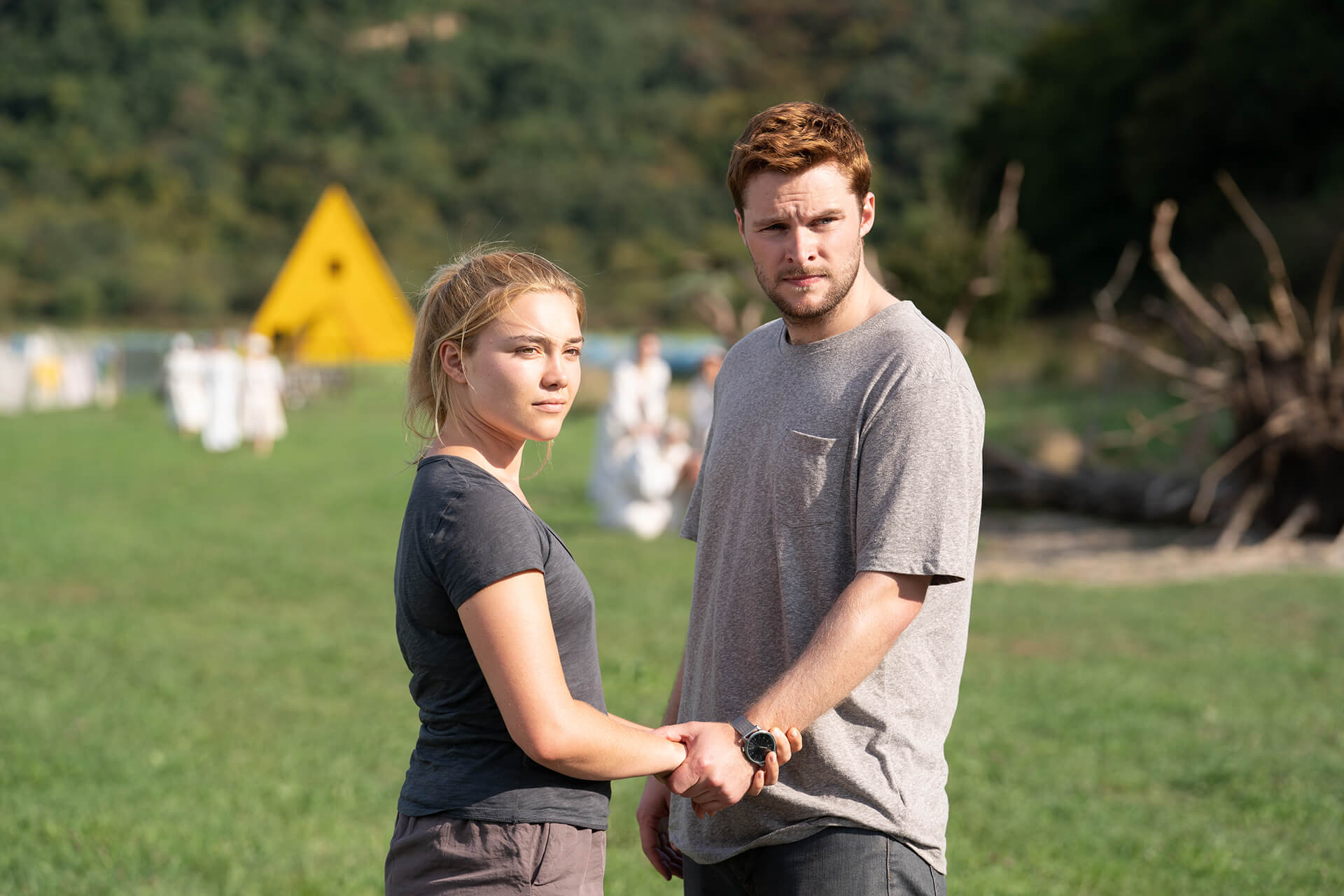 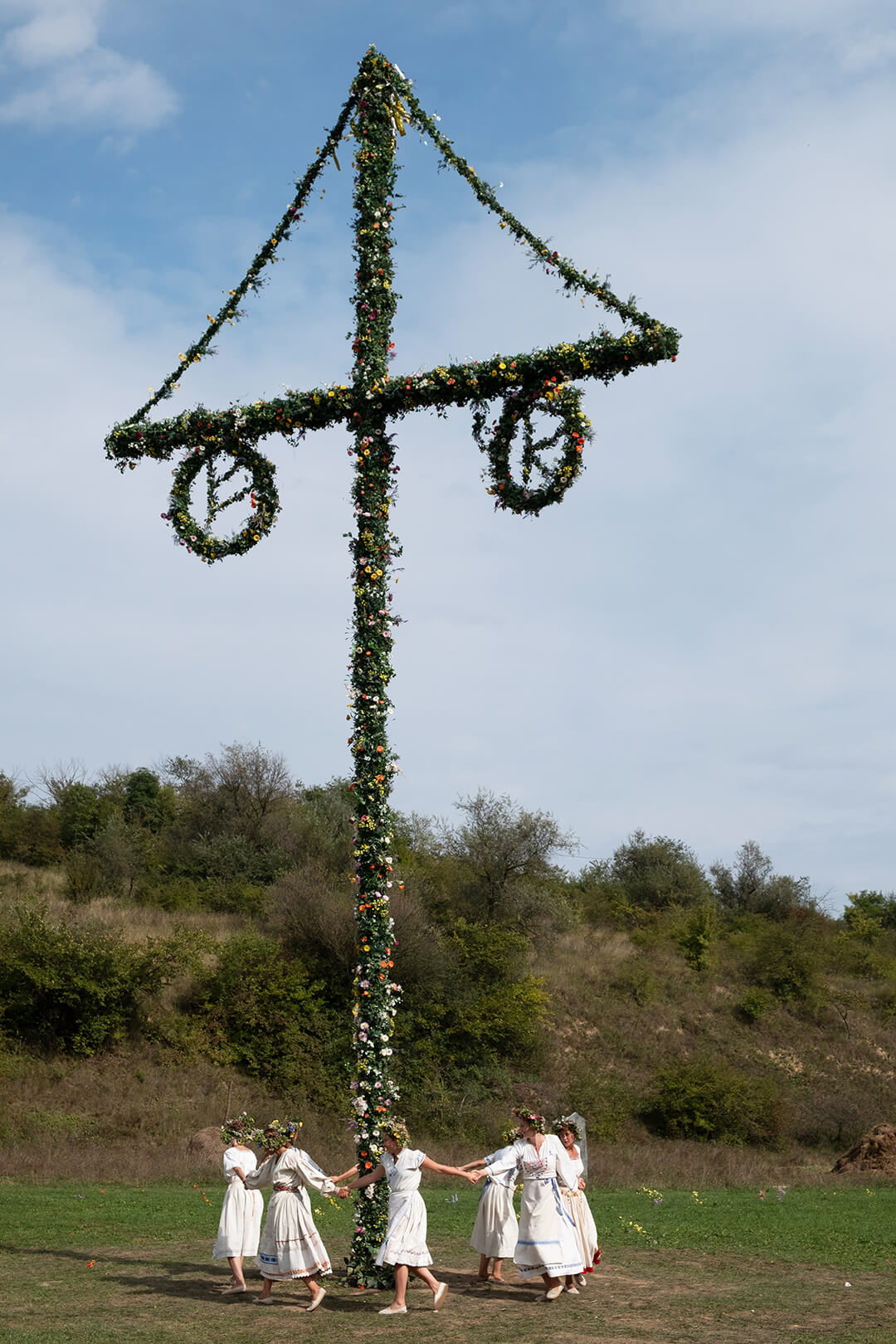 You speak of rapeseed, but in the Swedish coat of arms, yellow stands for generosity — voluntary human sacrifice can fall under that umbrella.
I wasn’t aware that it did — so in short, no. Yellow was already the color for this building in the script, so I can't answer for Ari [Aster], but don't believe that was his reasoning. Very interesting point, though.

All this aside, everything felt perfect with this color: from the general vibe in the movie to the specific vibe of the temple, Sweden and its summer colours, and the fact that I loved the idea of having traditionally ‘beautiful’ aesthetics represent darkness — such is the case with lush summer blossom.

We have a saying in Sweden: Gult e fult. It closely translates to ‘yellow is ugly,’ but in rhyme — kind of like ‘mellow yellow’ — and yellow can be very ugly in many ways. I love yellow, but it can be difficult to work with. Come to think of it, all of the Swedish colour-rhymes actually work… Perhaps that's my subliminal schooling in colour theory?

Everything is pumped up, fascist-architecture style 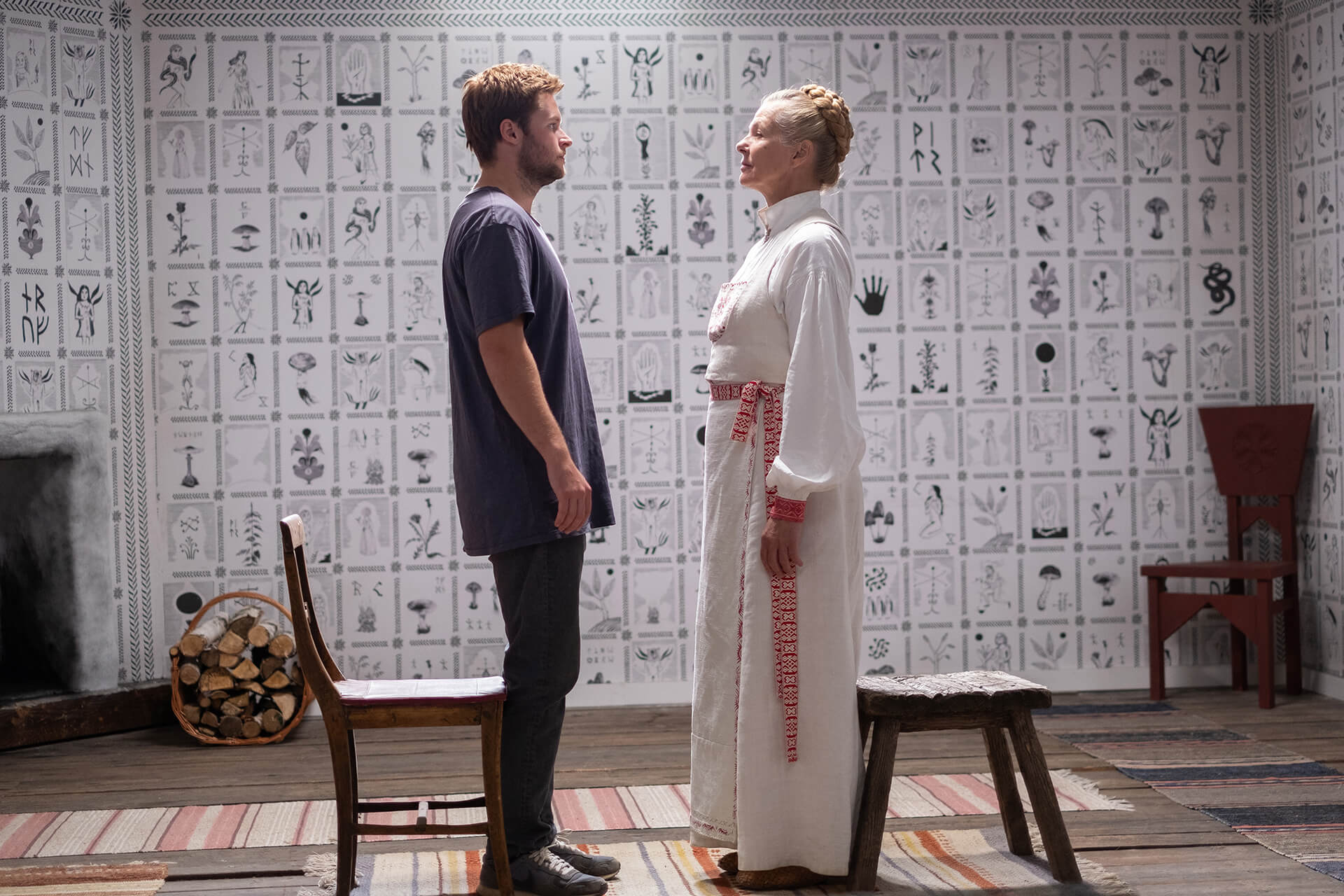 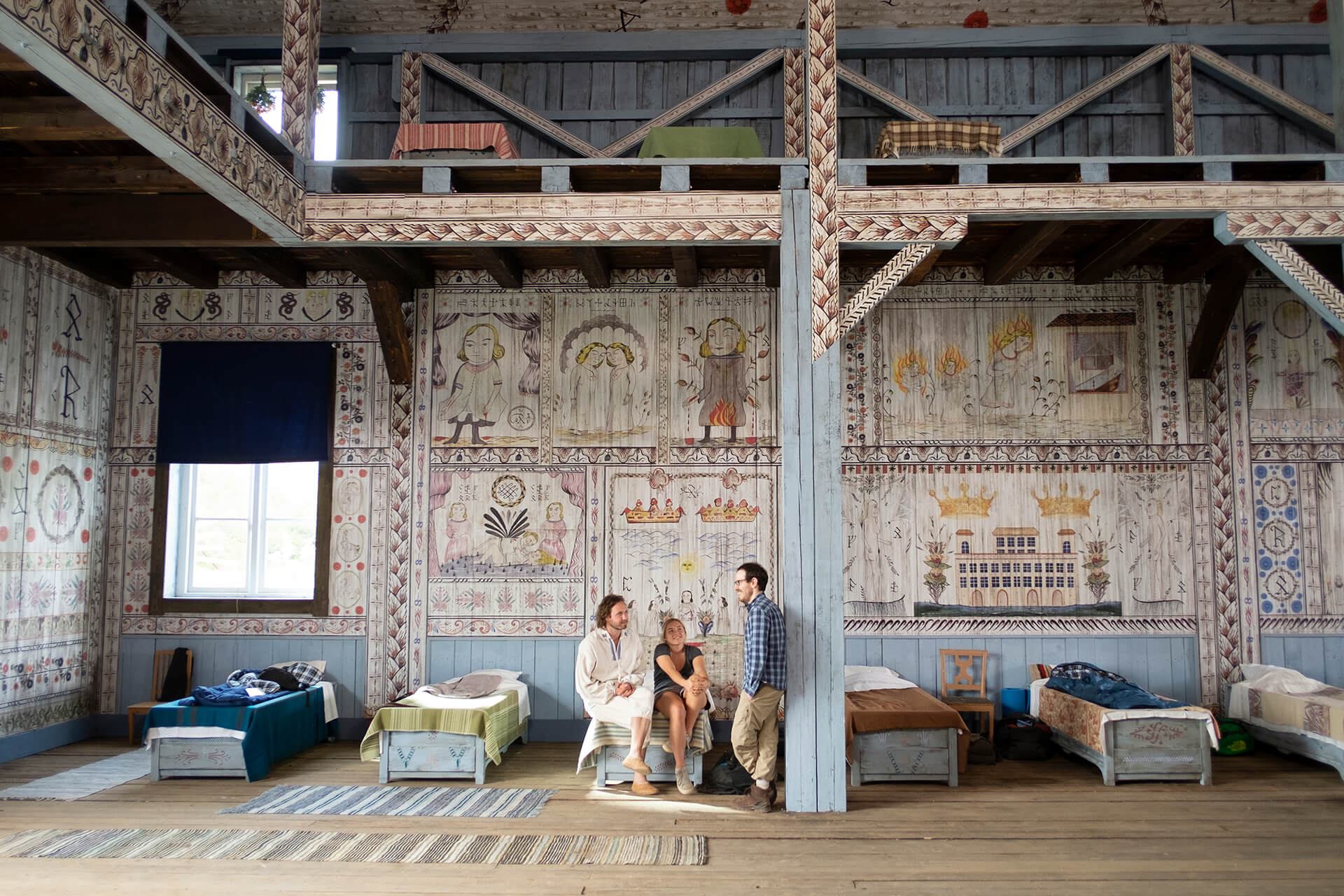 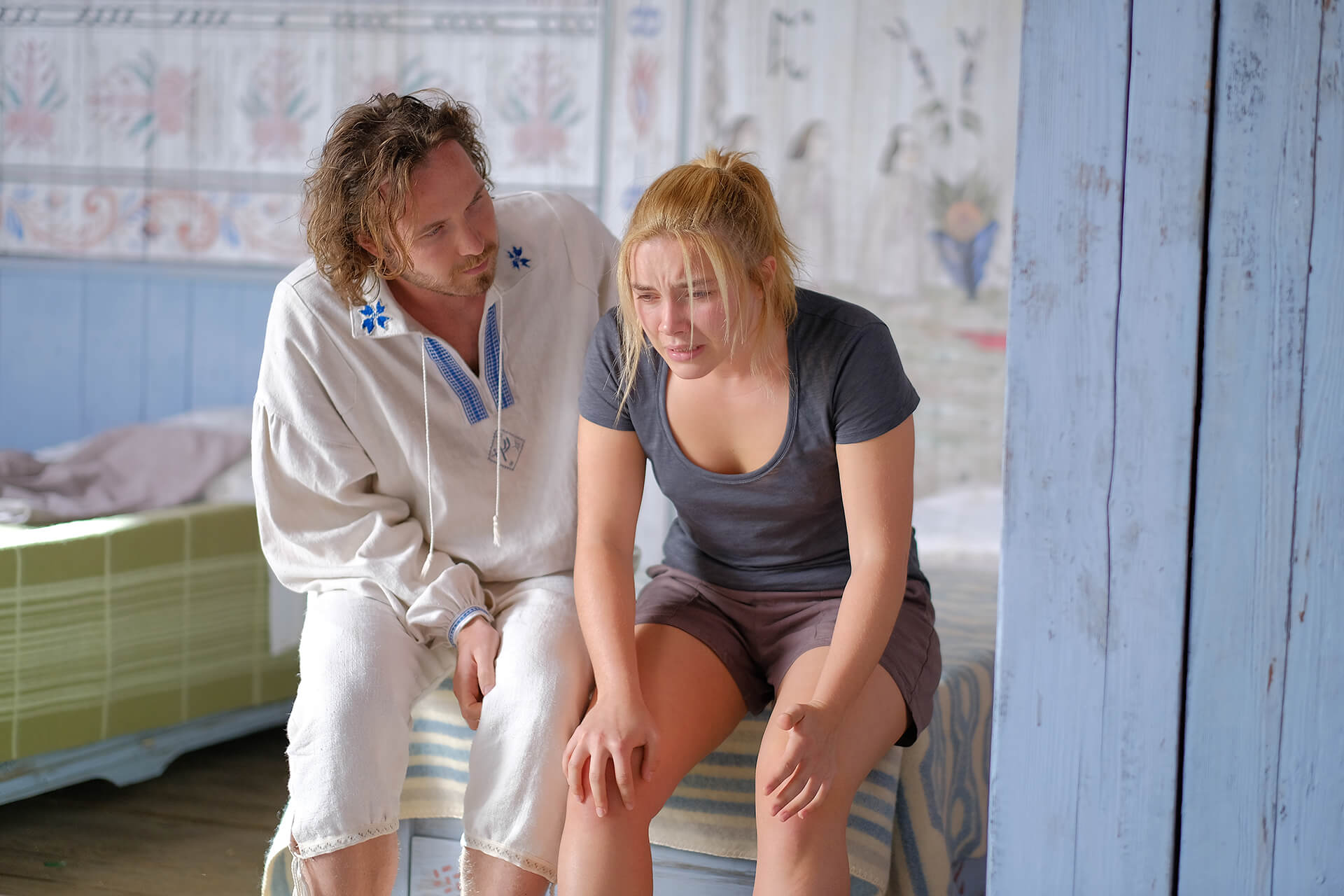 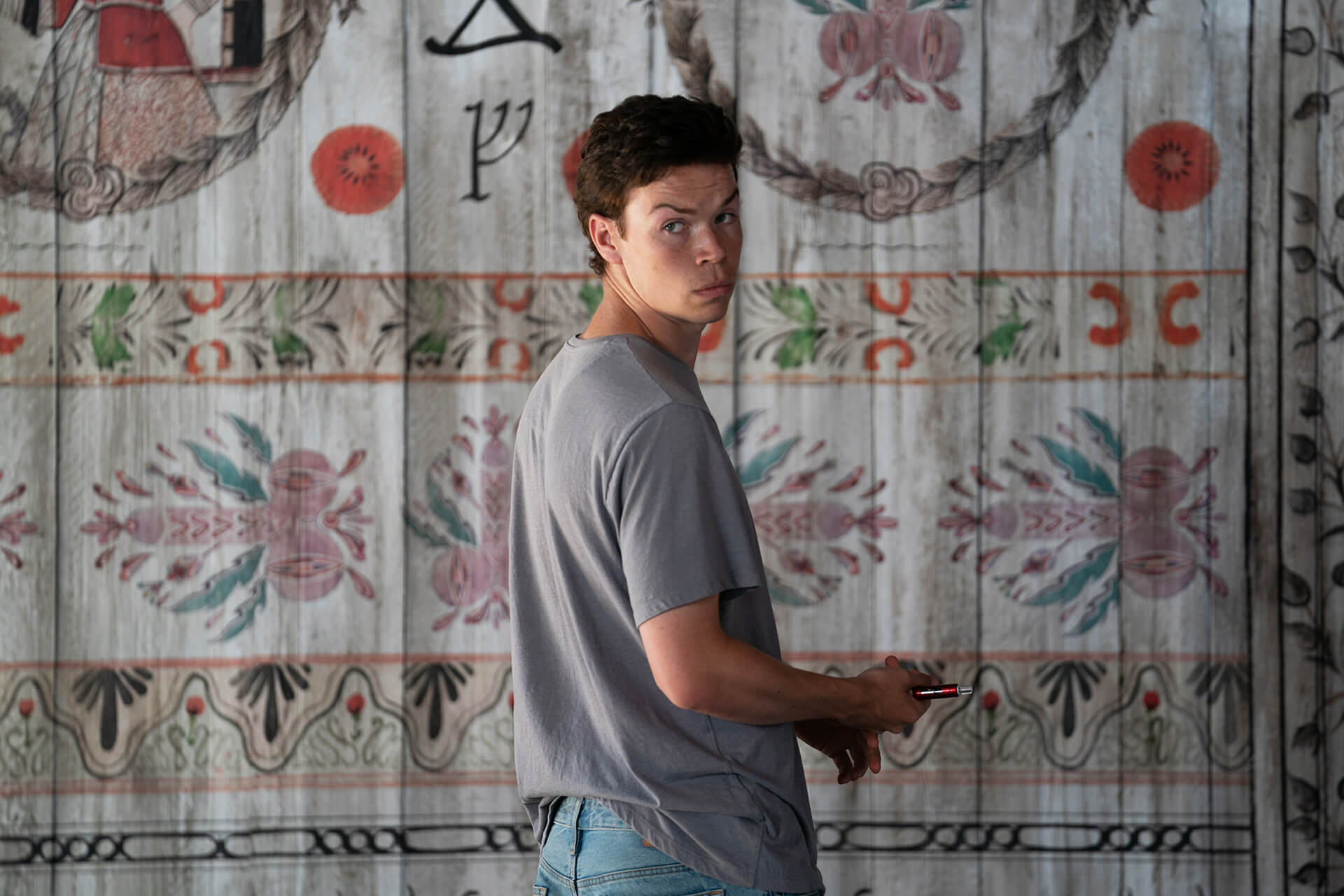 We’ve seen cases of how supposedly benign and even beautiful architecture can become oppressive if you add time. The dorm would be the most obvious case here, as it goes from a space with a veil of maternal protection to a foreboding prison where spells can be cast. How did you manage to make that beauty oppressive?
First of all, the size of it all. Everything with it — except for what’s in it, namely the beds and its inhabitants — is pumped up, fascist architecture-style. I find it historically and traditionally oppressive, and this place breathes with it. I wanted to make a beautiful and fascinating space that, after a while in it, would make you go: ‘Wait a minute... What the hell is this?’

With the slightest imagination, many historic, or at least old, places can make you feel that way. And sometimes you just need to push it over the edge a bit to get things to go weird. That was very easy to do here.

Speaking of fascist architecture, I can’t help but see the Colosseo Quadrato in Rome, currently occupied by Fendi, and think that it was initially a building commissioned by Mussolini – there’s a reading there of the beauty-washing of evil there that’s quite layered. Although, in your case, the visual possibilities for your world-building were rooted in one particular notoriously non-conflictive country.
It's important to note that just because Sweden was neutral in World War II, that doesn't erase the fact that there were strong Nazi sympathisers at the time, from the people on the street all the way to the king. This is still in some extreme way relevant in today's Swedish political climate, unfortunately.

Looking further back, Swedish history is full of megalomaniac warlords who were all about conquering the world. Regarding Hälsingland and its inhabitants, they always looked upon themselves as the original übermensch: tall, healthy and blonde who also had the tendency to build their farms and houses way bigger than the rest of the country, solely to brag. So it felt natural to upscale certain things in the film, not only for cinematic reasons.

CGI was meant to give us the possibilities to travel to worlds never before seen, and yet it’s a movie made of wood and linen that has such a visceral impact on us. Why do you think CGI has taken set design only just so? And why does the ancestral have the power to affect us in such a strong way?
For the first part, I think of music and sounds: to use actual instruments that you can visually see clearly played. Arms pounding on drums, or strumming strings, as pre-recorded backing tracks doesn’t ever work for me — just feels silly. To use synthetic sounds where you couldn't naturally generate otherwise is fine. Maybe synthetic sounds are the synthetic imagery.

This interview as edited and condensed for narrative purposes. Photos courtesy of A24.