The visitor souvenir at Amsterdam's new Fashion for Good museum? An action plan

In most museums you’d leave with a postcard, perhaps a refrigerator magnet. At Amsterdam’s newly opened Fashion for Good Experience, though, the most valuable souvenir is an action plan. The key to understanding how it differs from traditional sartorial exhibitions and museums lies in the name itself: the experience is the most crucial aspect.

With the C&A Foundation as its founding partner, Fashion for Good's first temporary exhibitions launched in Amsterdam in early 2017. Both institutions are invested in transforming the fashion industry, endorsing sustainable practices and technological advancements that allow for systematic change in the way we consume. The three-storey space, located in the city centre, is the world’s first interactive museum highlighting fashion innovation.

Achieving interactivity to engage visitors is a shift many museums are going for. When the planning began two years ago, a design competition was held to decide who would spearhead the project. After pitching a range of different ideas, New York-based design studio Local Projects was selected. The essence of their plan was to make a retail store where garments could be bought, but also to create a place where mindsets and behaviours could evolve organically. One level specifically showcases alternative textiles and production methods that disrupt notions of how garments can be made. 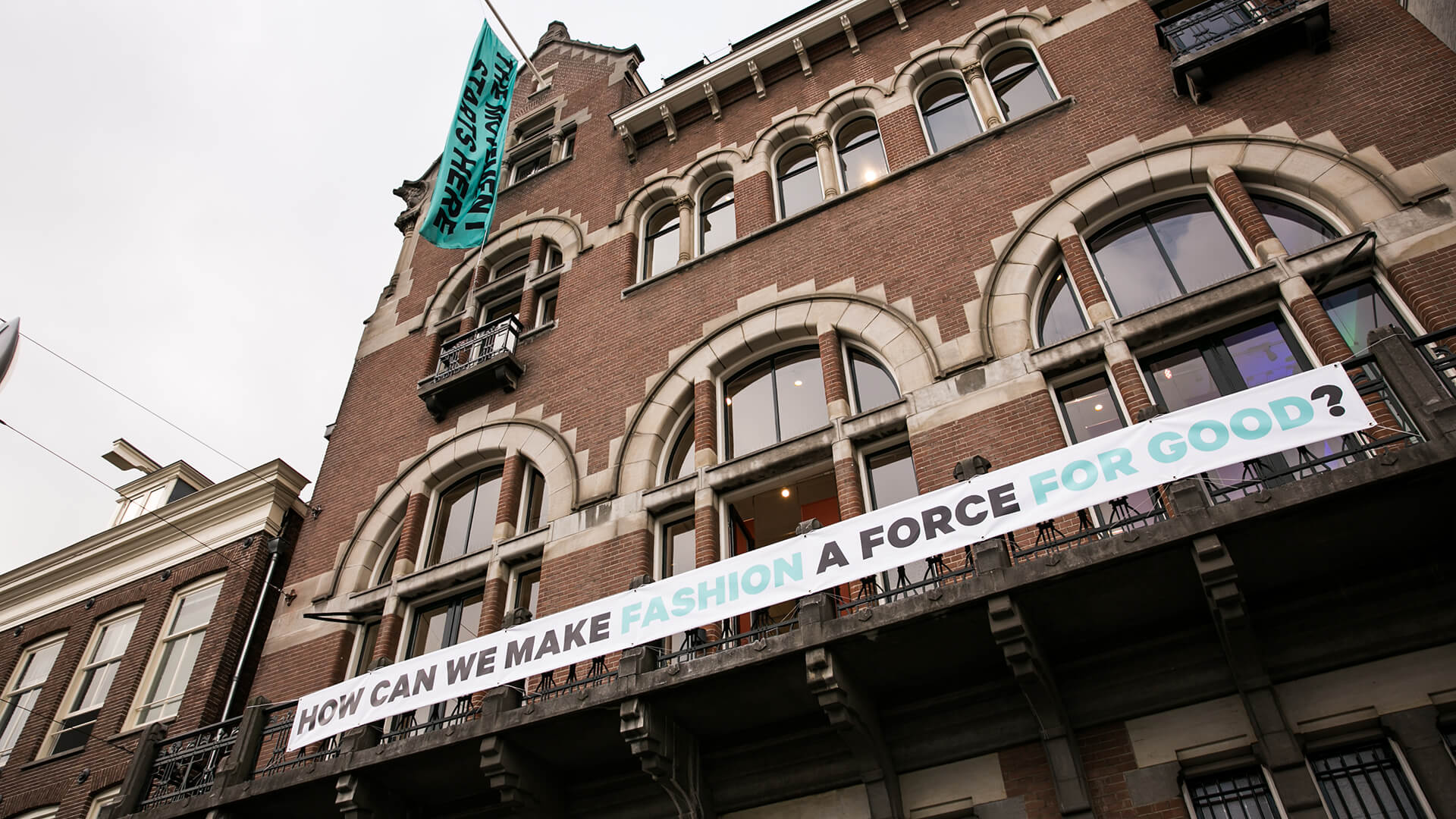 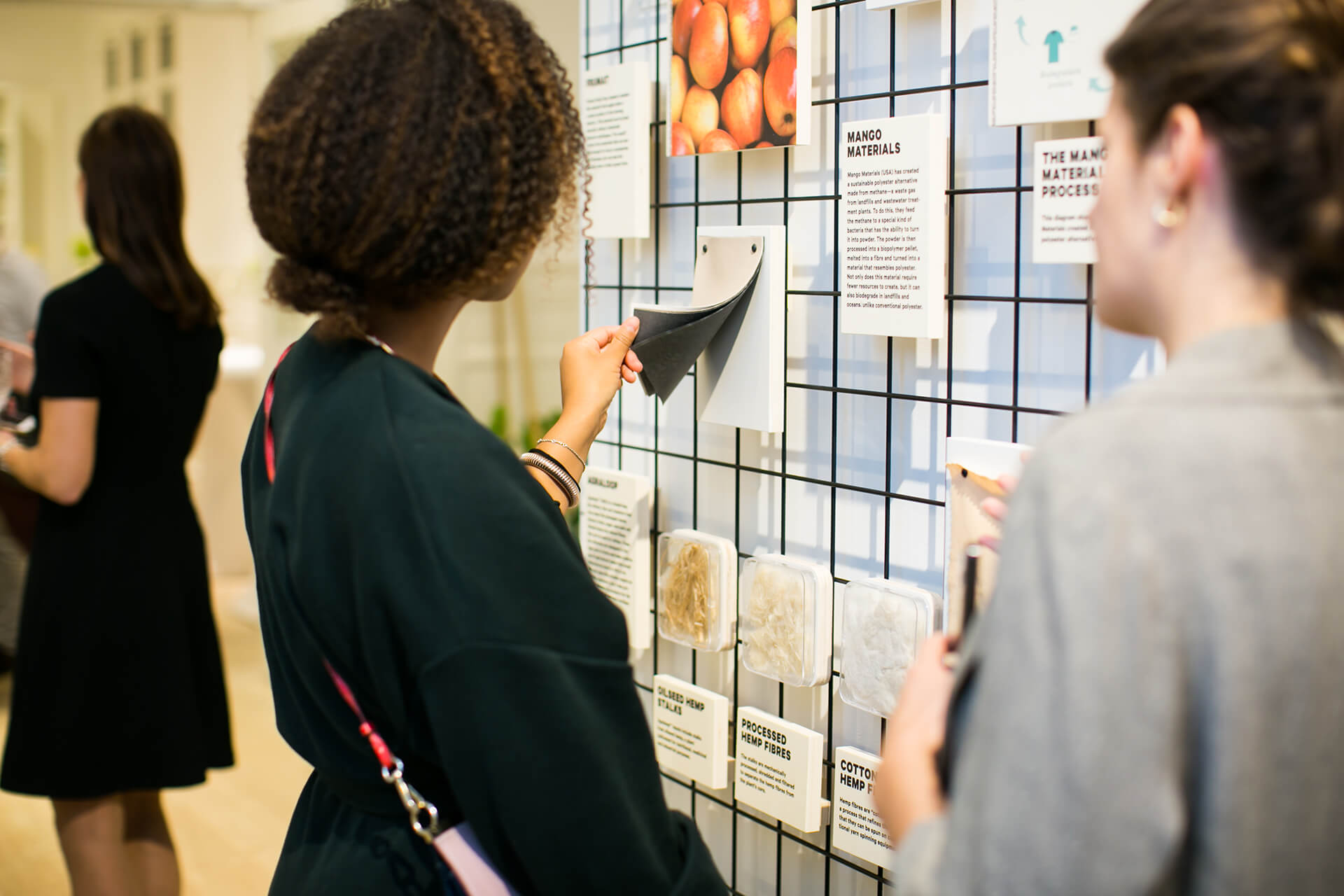 ‘At the core of our practice, we don’t think about designing objects or spaces: we think about designing behaviours,’ said Local Projects principal and founder Jake Barton. ‘When we start a project, we fundamentally ask what people can do inside of a space, instead of what we will make for them. And then we design armatures, whether that’s architecture or graphic design or technology that engender that behaviour.’

The consumption practices that fast fashion companies incite are notoriously detrimental to our planet and its people; the severity of the mark that irresponsible retailing has already left on our planet is one that Fashion for Good hints at without disenchanting or intimidating those who might be new to learning about what sustainability really means in the industry. It proposes a future narrative for the next generation of consumers, exposing a rather long to-do list for cleaning up the mess we’ve collectively made. As we discussed with Barton, the way the experience is designed makes checking off the boxes seem like less of a chore, and more like a challenge.

Right now in fashion, we are where organic food was 20 or 30 years ago

Local Projects has done work all over the world, from the 9/11 Memorial and Museum to the ARoS Art Museum in Denmark. Being in the centre of Amsterdam, who is Fashion for Good for? How does it represent where the fashion industry is at?

JAKE BARTON: I would say it’s very concretely designed for both the local and the tourist. The message is for everybody. The bottom level is frankly made for people who know about sustainability and care, but also for Dutch schoolkids. It’s in English and in Dutch, and it tells a story – what we call the Journey of the T-Shirt. It takes you through all the steps of the supply chain, all the way up to when you get that new piece of clothing. 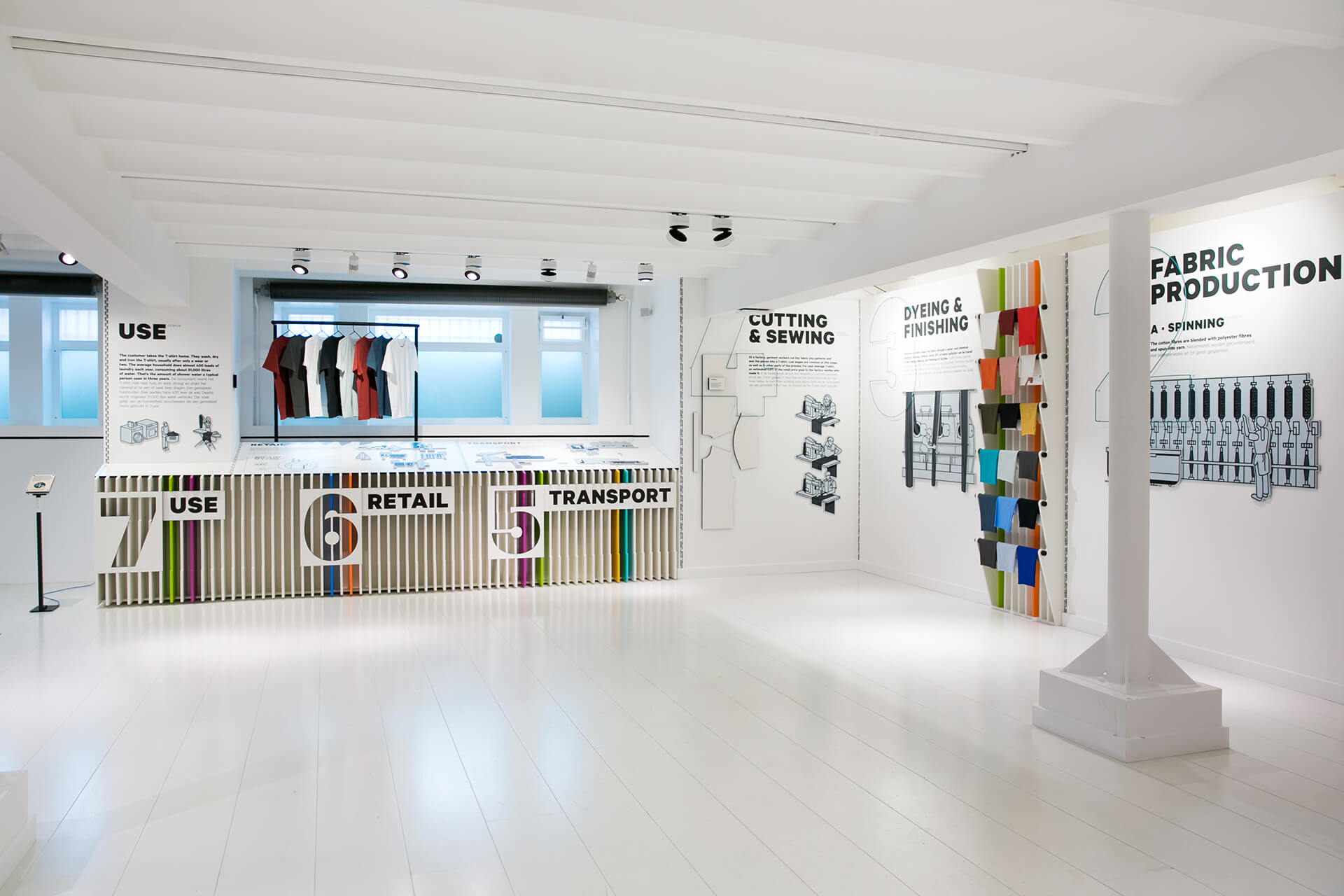 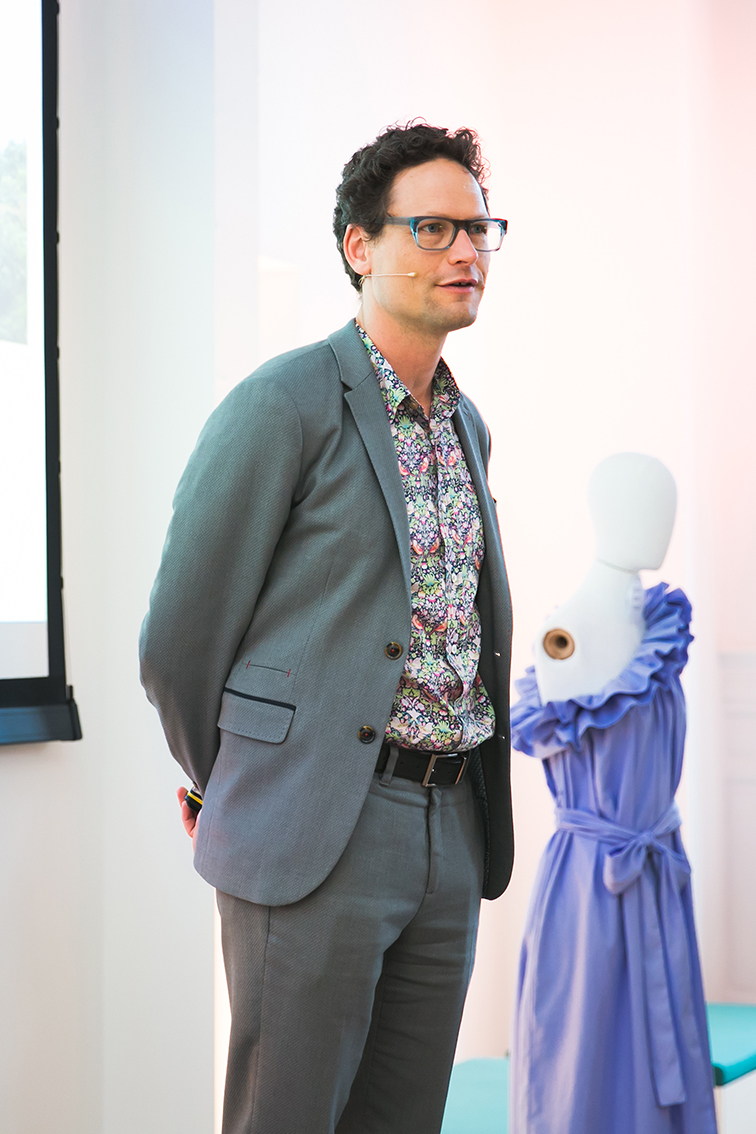 Right now in fashion, we are where organic food was 20 or 30 years ago. Organic food was a fringe movement that a bunch of counter-culture people purchased based on a matter of political pride – vegetables that honestly didn’t look so good and that weren’t very tasty. It was a political statement, and a matter of consciousness. That’s where consumption in fashion is today, mostly driven by ideology. We want people to look at clothing the same way they look at a tomato: What are the pesticides in it?

Your team worked on the Cooper Hewitt Smithsonian Design Museum in New York, which has many hands-on elements for visitors: interactive wallpaper immersion rooms and smart pens that allow people to create their archive on a personal URL. FFG provides a lot of similar chances for people to interact with materials and built-in technologies. How does the retail space on the main level work?

It’s curated, almost an exhibition unto itself in terms of the products and the stories of the products. Whether it’s a big, broad-mass appeal name like Adidas, or a high-fashion name like Stella McCartney, we definitely want people to recognise that this is something that’s tangible and understandable within their general consumption habits. We also can introduce them to new providers, like Kings of Indigo. 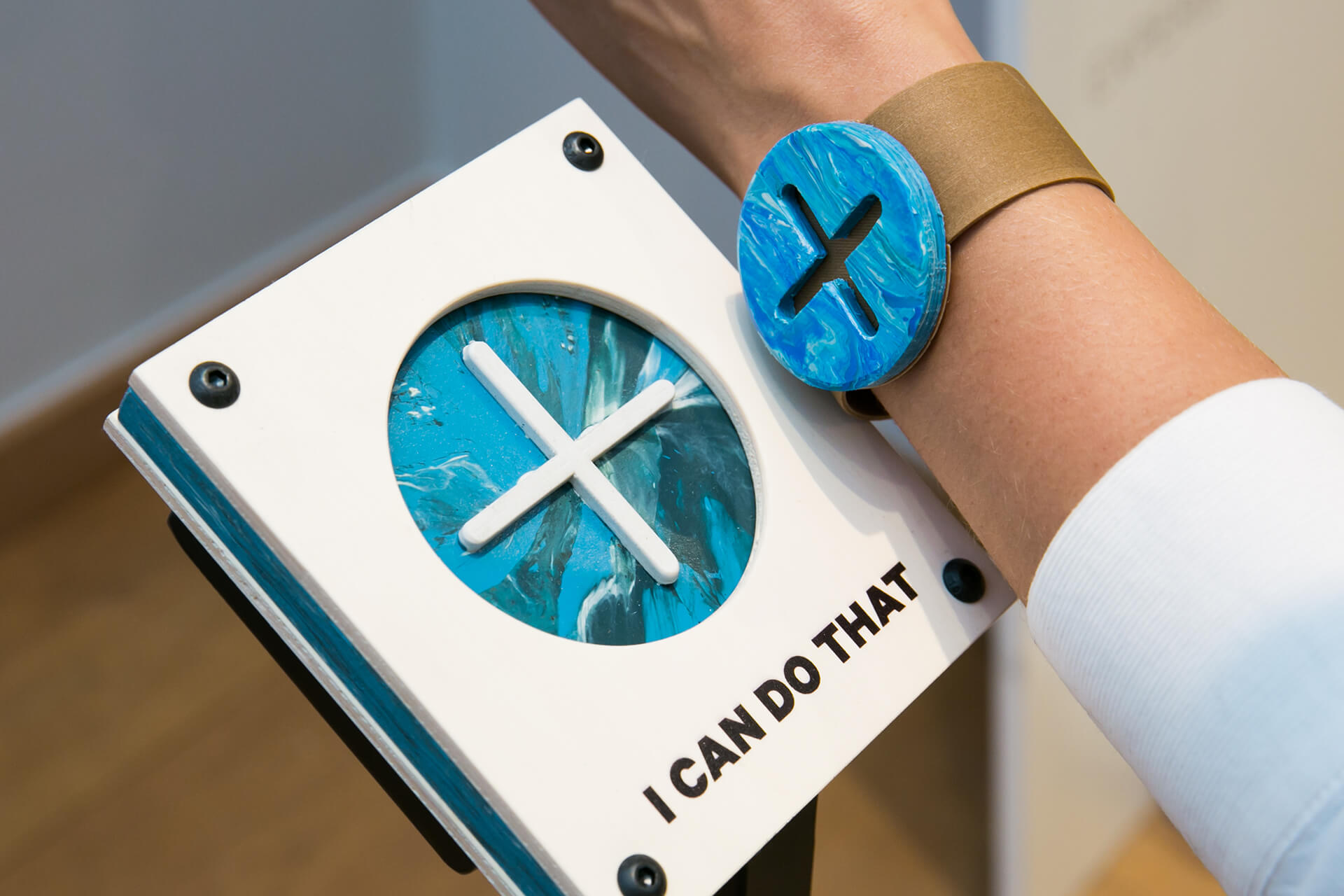 It’s also a show, which has a theme to it. Our theme now is water; our next theme is going to be called Naked: it’s about the transparency of how things are created. They’re exhibitions, but you can buy the products – exhibitions on sale.

The space is surrounded by these individual stations that let you literally shop for new behaviours and new actions that can make the world more sustainable. Using the RFID-enabled wristbands, you can collect actions and commit one by one. We want people to actually think about it. We had one that said: ‘You don’t actually need to wash your jeans, you can freeze them, and it will kill all of the bacteria.’ I was like, I am very messy – I am never going to do that!

Well, and then your ice cream gets on your jeans, and…

Yes, and your green beans, terrible! The point is, if each of us is able to look at the actions that we take, in terms what we buy, but also in terms of how we treat our clothes, that’s a huge part of the waste within the apparel industry. The apparel industry wants to change. It recognises that the level of manufacturing and disposability is not sustainable. That’s a lot of what the shop is asking people to think about, to act on. For some people, not shopping for 30 days is a big deal. It’s about changing behaviour and empowering people to recognise that yes, it is true: all of these providers should be thinking sustainably about their production practices, but they won’t do that until consumers really start responding to that.

For the consumer here and abroad, what’s the intended impact of the space?

We’re aspirational. It really depends on the people that we have visit the museum, and the level of transformation that we build into each and every visit. We’re very tactical about the specific actions and specific call-outs and the ways that people can then reach out to other people to impact the world. It’s not a shocker that we have a ton of social media opportunities inside the spaces, and neither is it that we will be partnering for a lot of events, injecting ourselves into other communities. 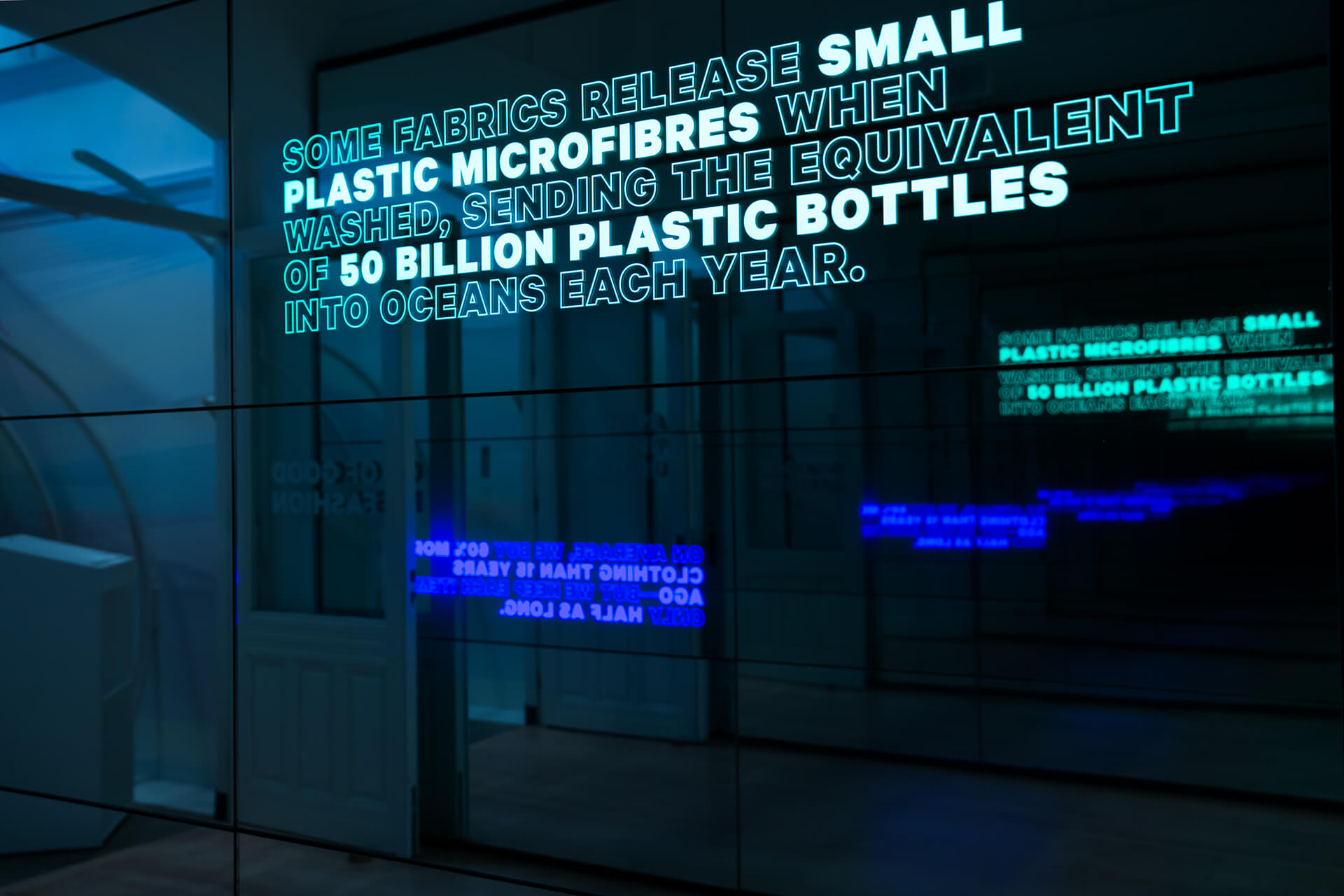 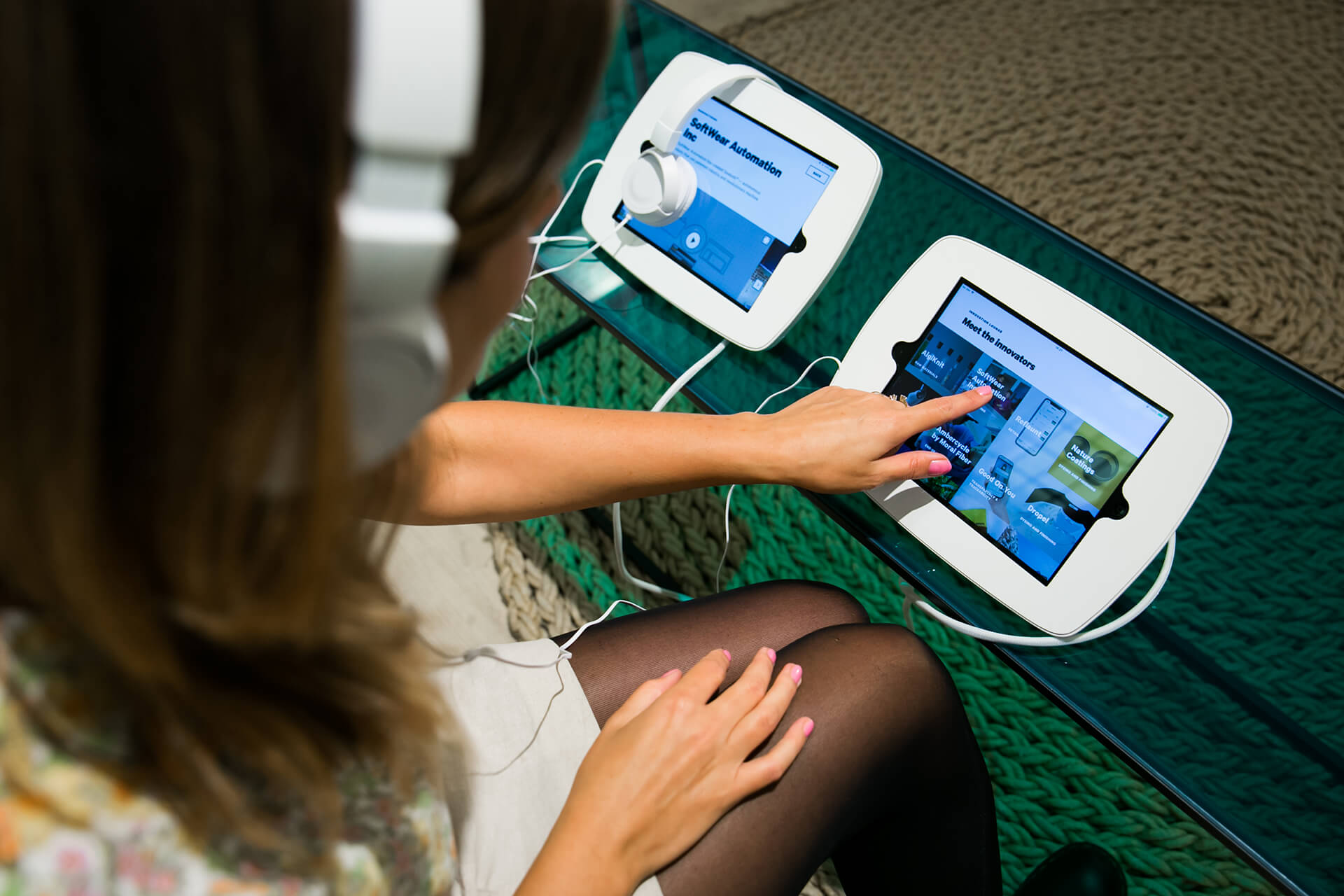 How do you see the space and the brand of FFG expanding in the future?

We do have plans and conversations around bringing pop-up versions of the museum to fashion weeks around the world. We have the material, we have the content and the experiences. It’s not a confrontational brand: a lot of the stories that we tell are tough, but they’re positive, too. They point out that our oceans are filling up with garbage – that’s real. You can either spend time thinking about it or not, but it’s really happening right now. If you can buy a pair of shoes that took a hundred or two hundred plastic bottles out of the ocean and turn them into sneakers, that’s awesome. Who doesn’t want to do that? The reality is that every industry should find different ways to be more sustainable.