There is a reason Netflix has been aggressively hiking its investment in original Mexican content in the past three years: the country now manufactures and exports the same amount of goods as the rest of Latin America combined, and that also includes quality entertainment — hola, Roma; hola, Club de Cuervos; hola, Chef’s Table: Enrique Olvera and Cristina Martínez.

It’s this embedded manufacturing prowess that lies behind the rise and strong positioning of events such as Design Week Mexico in Mexico City and Campamento de Diseño in Guadalajara. It’s also why European designers are setting their eyes on the country’s creative force: there is a legendary richness in the nation’s craft and visual tradition that, given our current return to maximalism, speaks to today’s aesthetic leanings. In fact, these particular events were the site of two Mexican-European collaborations that yielded some tightly layered hybrid objects.

We spoke with Carulla and studio director Adam Johnston, De la O and Guarnaccia about these two projects — as well as the conflict between aspiration and representation that is fuelling the contemporary design scene. 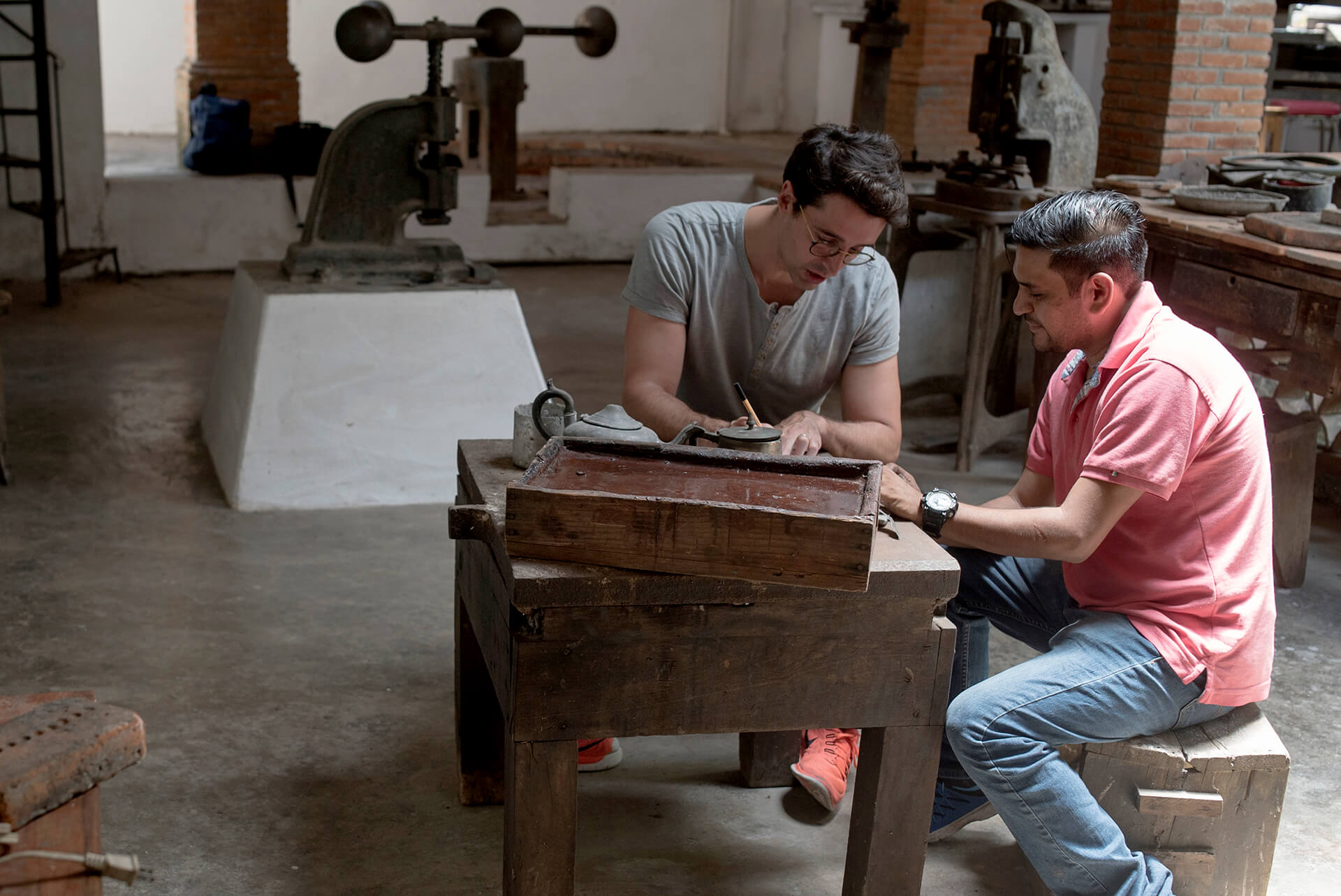 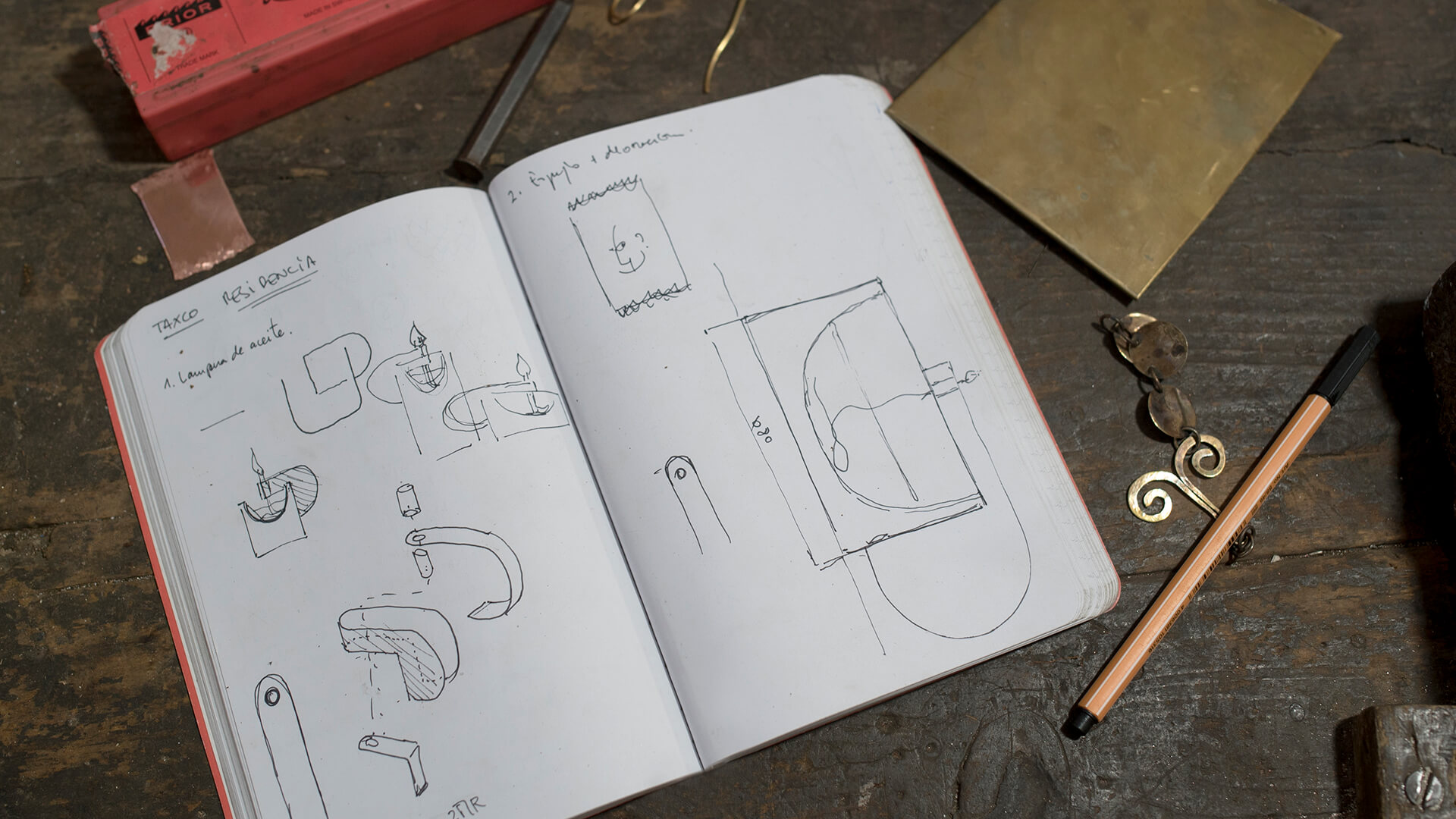 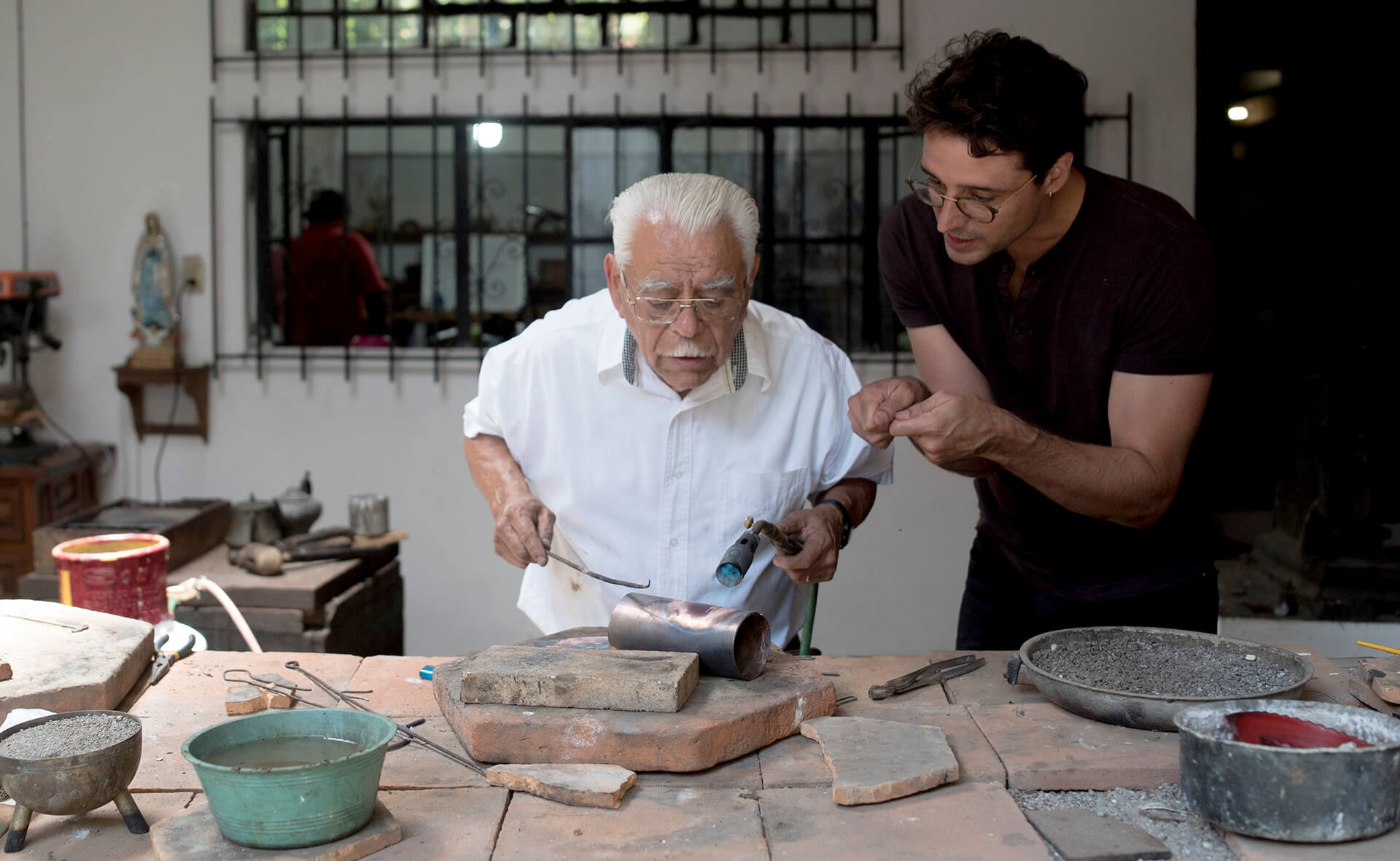 Why oil lamps?
ANDREU CARULLA: The human race would not have come as far as it has without discovering and controlling fire. The problem after lighting a fire was keeping it alive. It was not until Ancient Greece that it became a long-lasting light source in the shape of an oil lamp. I have a great interest in salvaging techniques, tools and customs that have fallen by the wayside, and for this reason I wanted to centre my collaboration with Design Week Mexico on the design of oil lamps.

Why did you decide to use pyrite, locally known as fool’s gold, instead of a more sophisticated material?
ADAM JOHNSTON: Fool’s gold is cheaper than silver, therefore making it a much more accessible product. Although they have a luxurious appearance, the form of the lamps is a very deliberate and reduced interaction of simple shapes. The design is intended to be as humble as possible, and that idea is carried through in the material.

There was no deliberate attempt at romanticising the past

I am Latin American. Thinking of an oil lap makes me rather sad, because it reminds me of how, up until very little ago and even today, many people in the region lack access to electricity on demand. How did you balance the romanticisation of a non-industrial past and an attempt to, ahem, shine a light on a lost perspective?
ADAM JOHNSTON: The oil lamp still has relevance today. It is a timeless object that, as you mentioned, in places that still don’t have running electricity is still one that has utility. There was no deliberate attempt at romanticising the past; it was more about romanticising or elevating the beauty of the way an oil lamp produces light.

What did the silversmiths bring to the project?
ANDREU CARULLA: I’ve had a fascination with oil lamps for a while, and from what I learned about the techniques the craftsmen were skilled in, this seemed like the perfect opportunity to finally design a collection.

Whenever I work with craftsmen from anywhere in the world, the aim is to learn as much as possible about the techniques they use and the expertise they have accumulated over the years. So this was an exercise in listening and deep understanding. 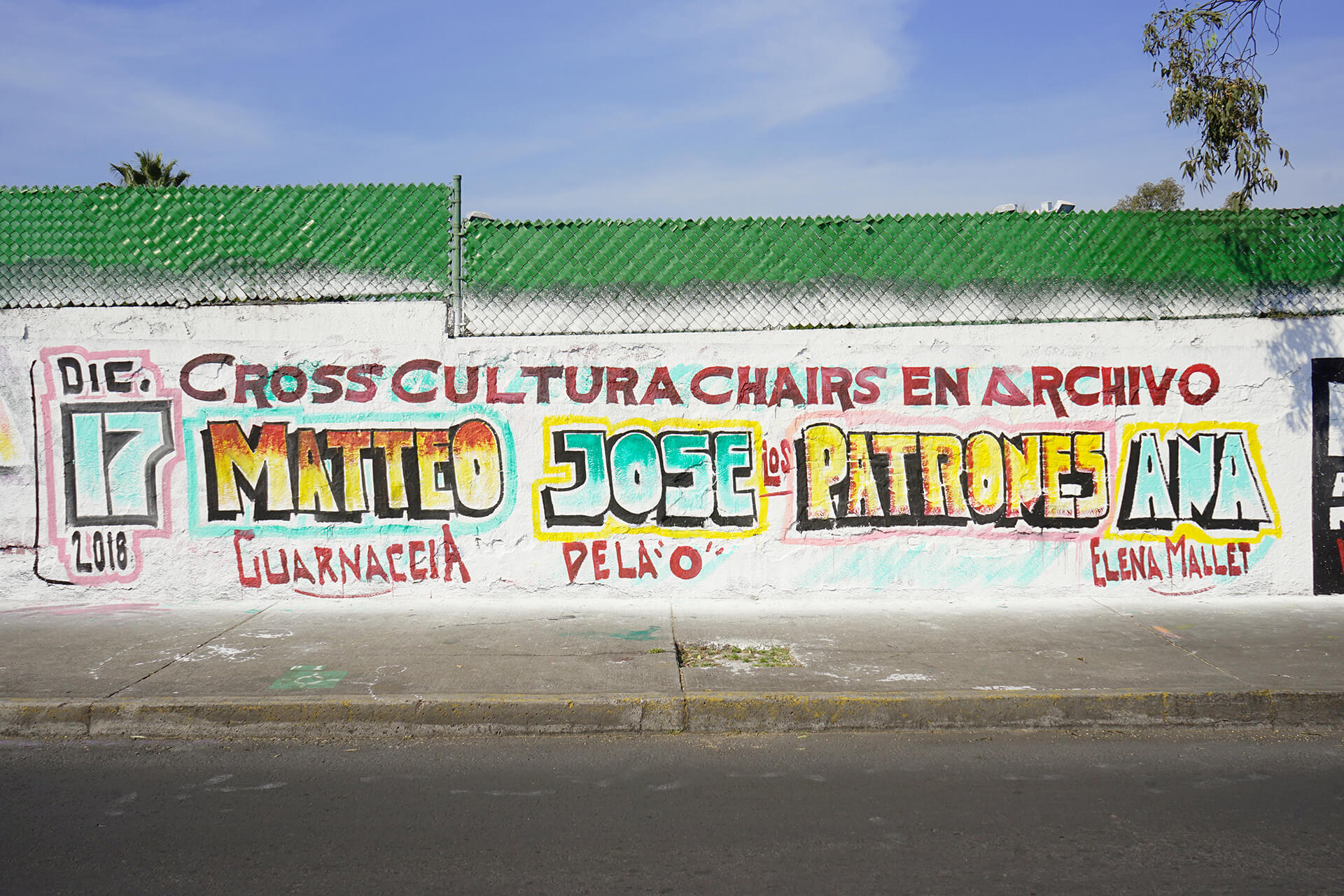 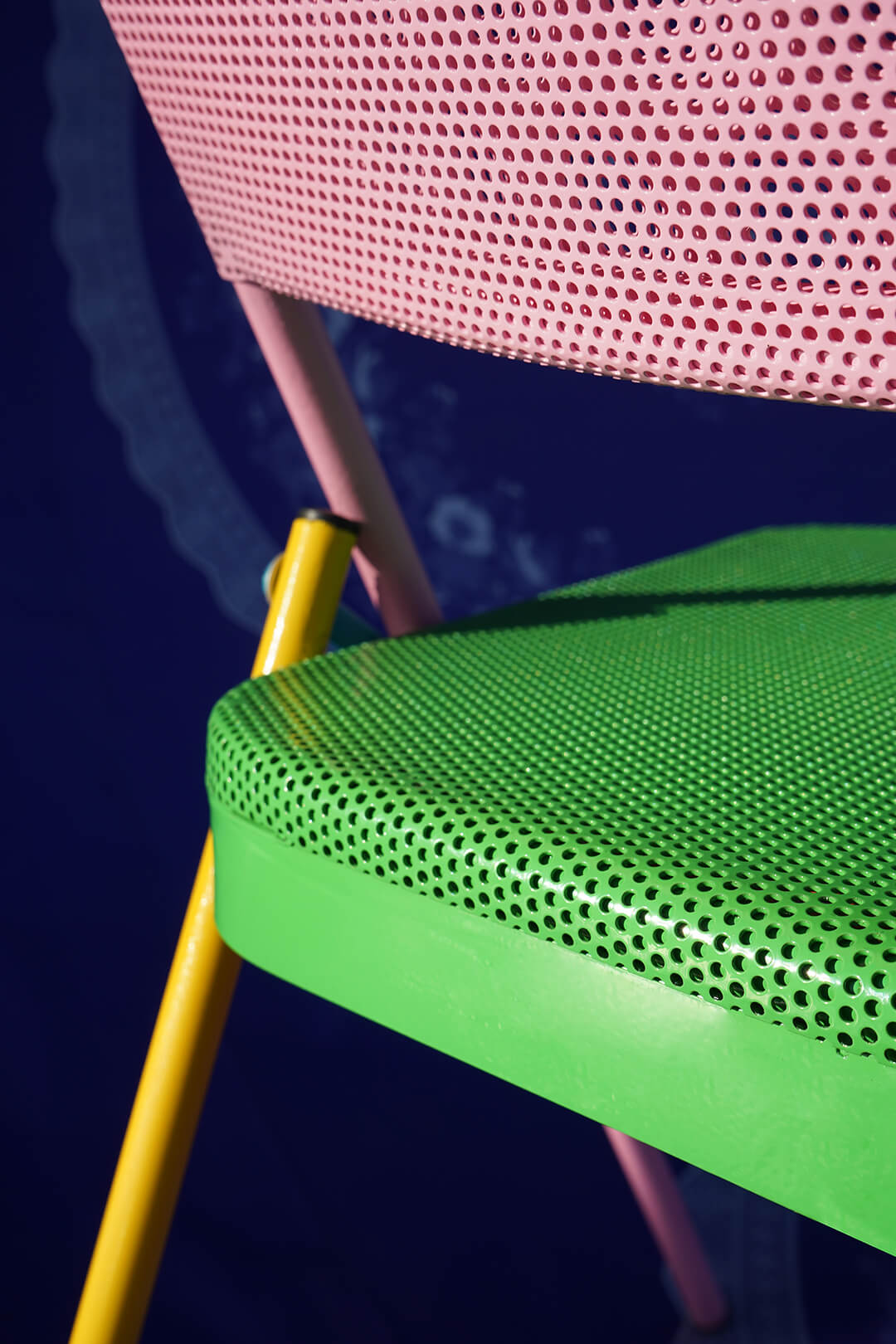 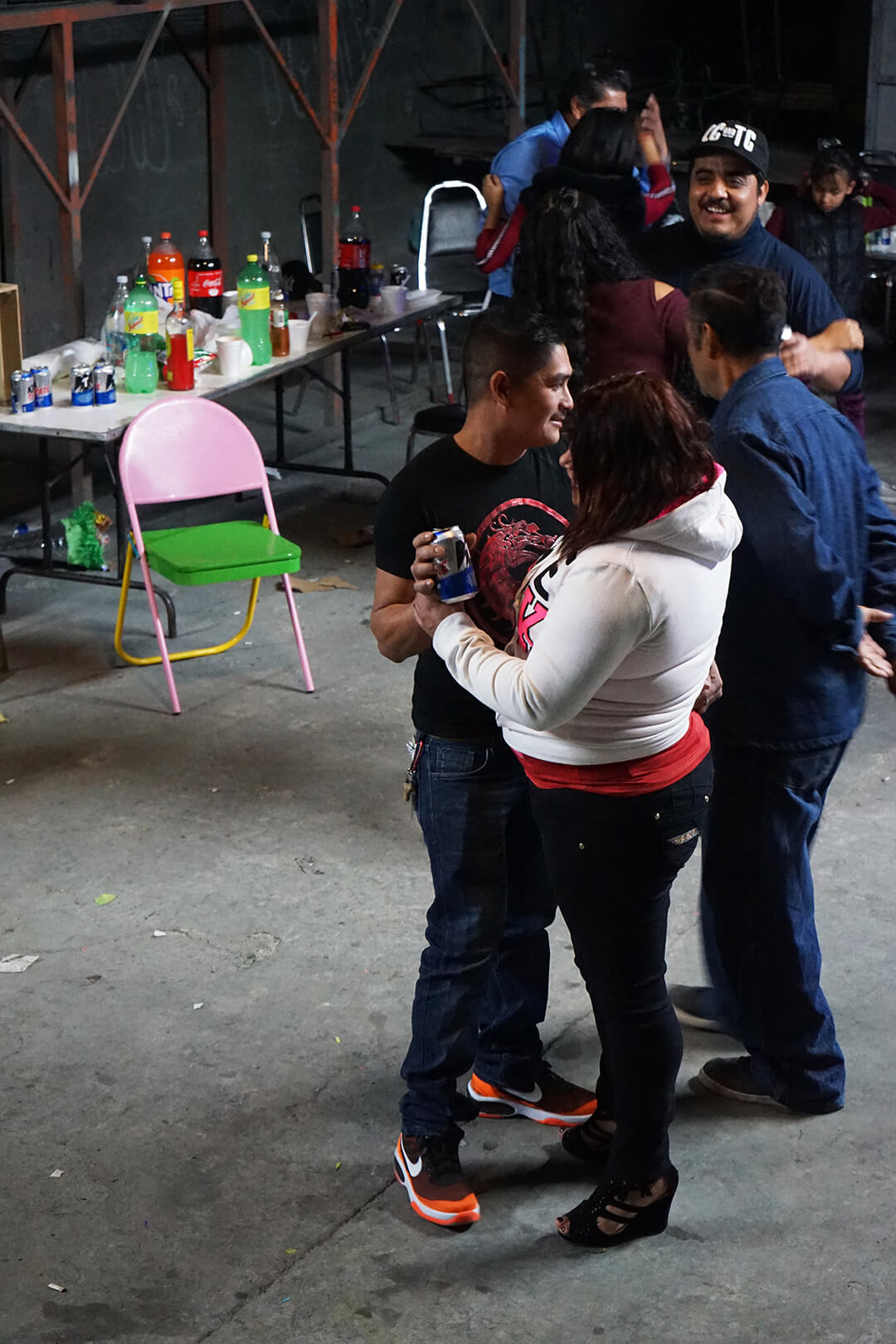 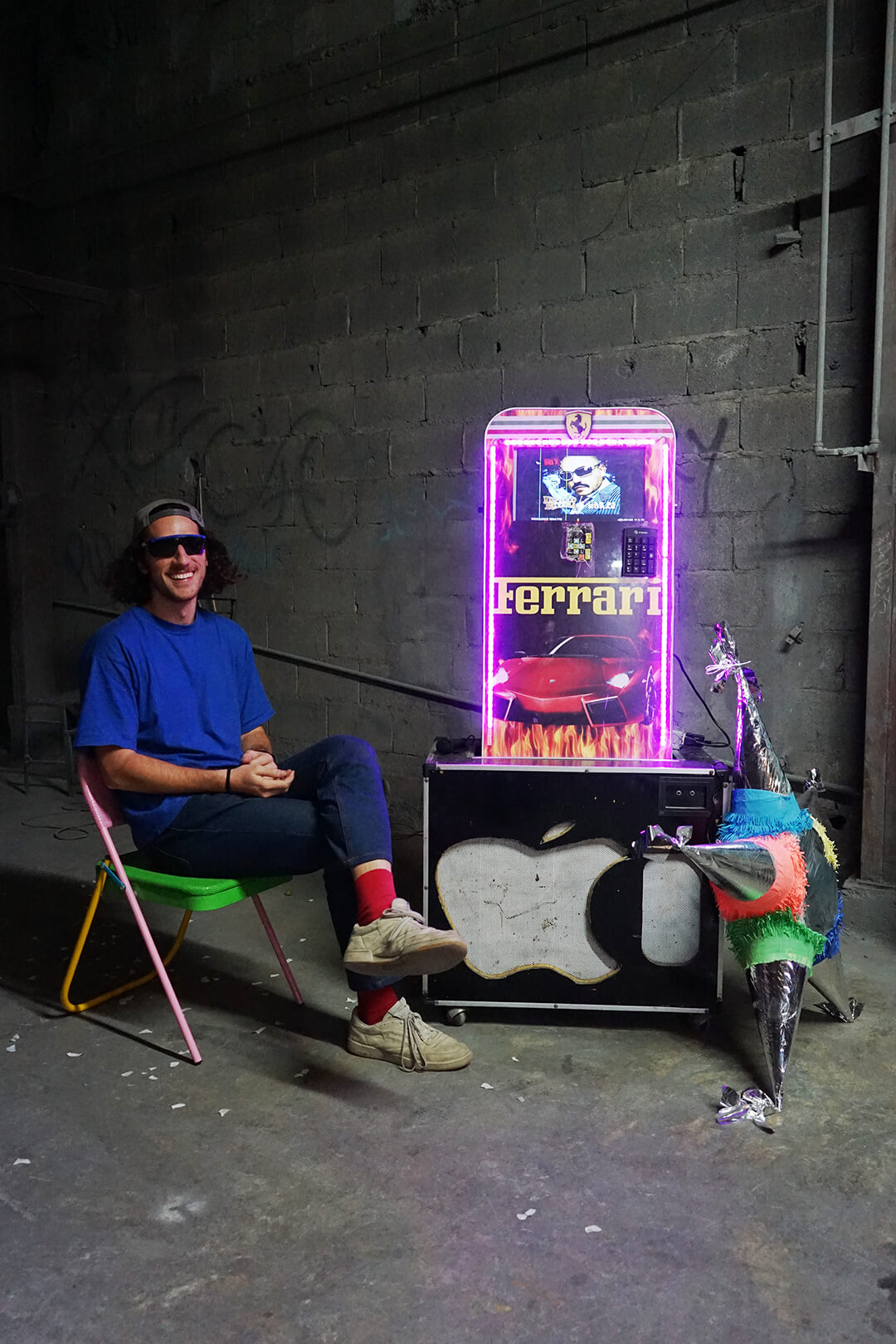 Where was the Corona chair actually born? What type of relationship to contemporary Mexicans have with it? Do many believe it’s fully Mexican?
JOSÉ DE LA O: It’s apparently an American design built by a company that we know today as Samsonite. The beer brand brought the design to Mexico — maybe by plagiarism — as a marketing scheme. A curator friend of mine told me that the brand Corona is not actually Mexican, but founded in Puerto Rico and the rights were sold to Grupo Modelo, which is today owned by a Belgian company. So, technically speaking, none of this is truly Mexican — but the combination of the whole is, like the mestizo race and its mix of all ethnicities.

MATTEO GUARNACCIA: During my stay in Mexico, the Corona chair was presented to me as one of the Mexican design icons several times. I had the chance to travel quite a bit, covering Monterrey, Guadalajara and a road trip from Mexico City, where I was based, to Tulum in the south. There, I could see first-hand the popularity of this chair in very different social layers, from taco trucks on the street to fancy hotels.

Aesthetically, Mexican culture could not be further away from modernist values

We’re increasingly seeing the Moiré effect in colourful typography work here in the Netherlands, as a rejection of the black-and-white-sans-serif blandness we’ve been exposed to for years. But for the Mexican consumer of author-based-design, it might actually be a reminder of the sonideros and tianguis that inspired this update. How did you handle that duality?
JOSÉ DE LA O: It’s funny that you mention that, since modernism is seen as pretty aspirational in the design scene. A lot of people here call it ‘minimalista.’ Aesthetically, Mexican culture could not be farther away from modernist values. It’s been like that until recently, when some foreign designers based in Mexico are using those aspects found in sonideros and markets and so on. But to be honest, most young and local designers still try to find inspiration in modernism, craft and luxury as an aspirational way to define Mexican design.

MATTEO GUARNACCIA: The decision came from José, once I pointed out the many applications of colour gradients in Mexican visual identity. From the bardas (graffiti) on the streets to religious iconography and food signs, we wanted to express this cultural resource in a more contemporary way, giving it a twist into the Moiré effect.

During the research phase, José showed me some good references of sonideros, and I was very impressed by the typography work they do to promote their events locally. So, when we had to promote our presentation at Archivo Design and Architecture Gallery, I thought of using the local way of promotion and adapting it to CCC. After quite some deep research, I found someone who would make only one for me, as they only do a minimum of 40. I wanted asked me how I wanted it to look like, but I wanted him to design it in order to achieve a true Mexican style… so I lied and I told him that we were several music bands and that Archivo was a concert hall. He felt much more comfortable. He even asked if I wanted the name of the project to be bigger, as he told me that the name of musician should be bigger than the name of the event, in order to attract more people from the street.

The word handcraft in Mexico is associated unpolished finishings; that contrasted with my Italian mind, where handcraft is the highest quality of production you can achieve 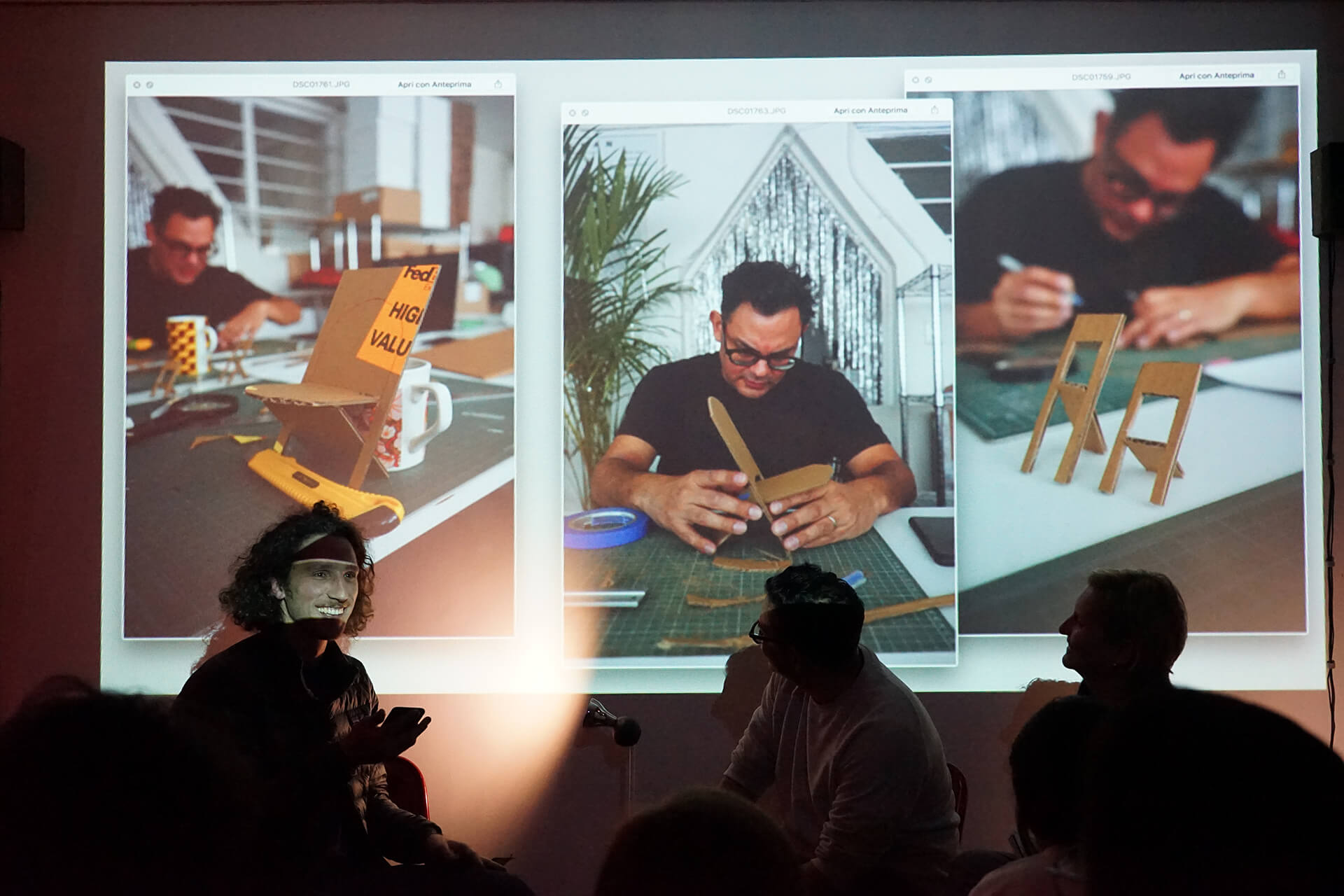 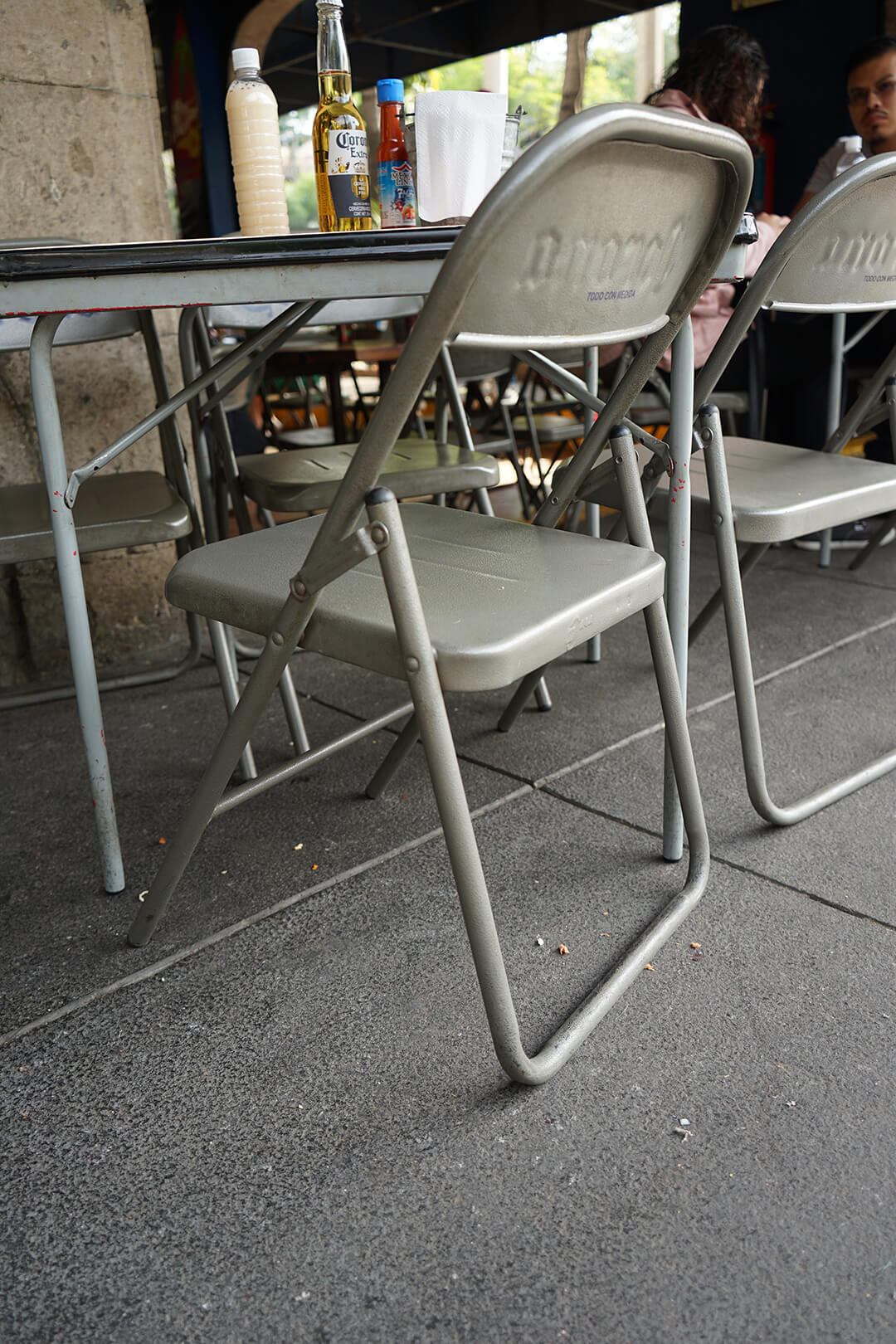 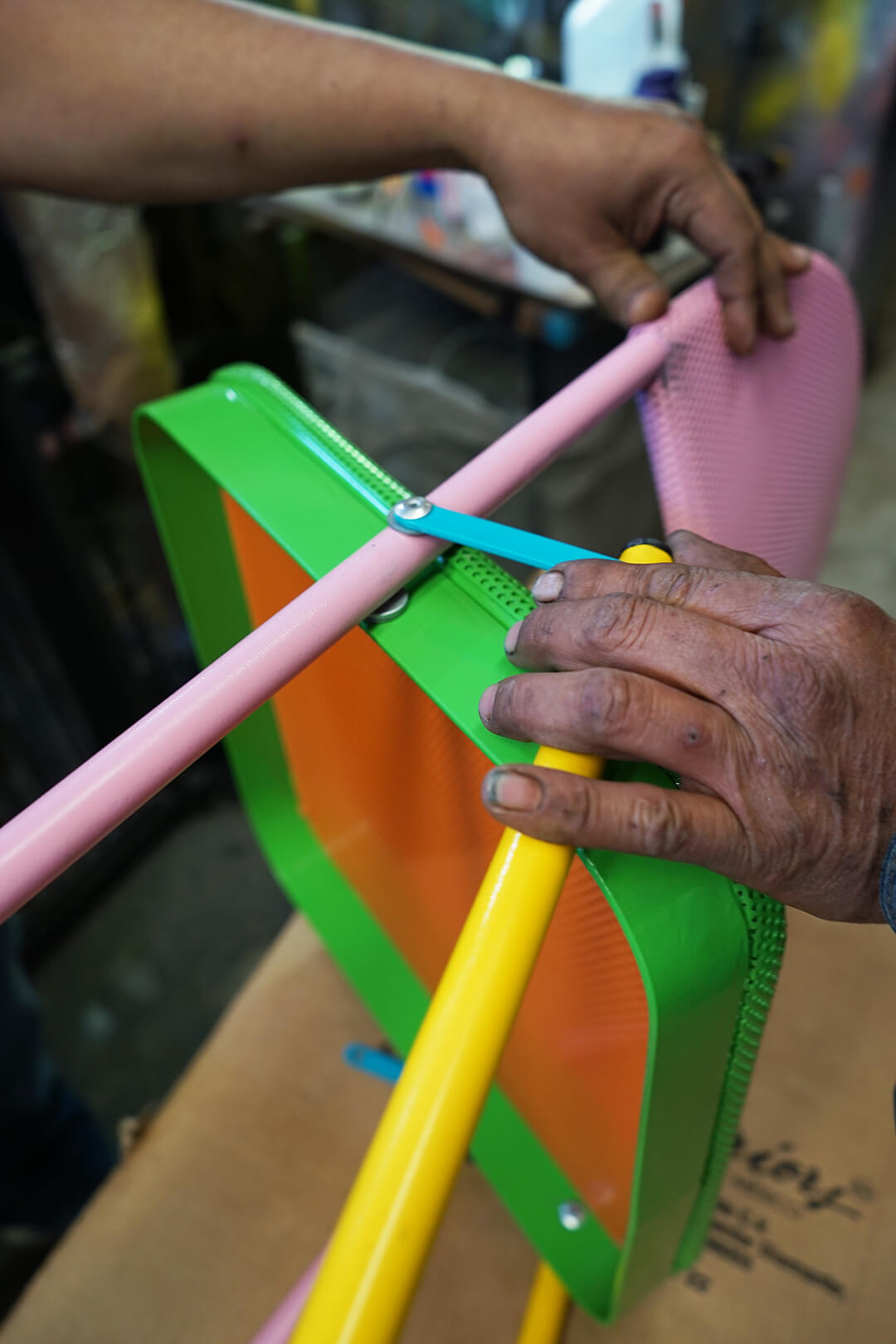 You worked on the chair itself with Los Patrones. Why did you choose them?
JOSÉ DE LA O: We wanted to get away from the cliché of tradition and craft that most designers seek in Mexican identity. We wanted to use a manufacturing process that didn’t come from a vernacular, rural or indigenous background. Los Patrones is a Monterrey-based brand founded by two young entrepreneurs who are focused on producing high-quality utilitarian objects using metal. And that’s no coincidence: metal is actually very representative of Monterrey, the third largest city in Mexico.

MATTEO GUARNACCIA: We were looking for someone who was using a handmade process, of course with the help of machines, but keeping a high quality and standard of production. Every time I heard the word ‘handcraft’ in Mexico it was associated by with bad quality and unpolished finishings. That contrasted with my Italian mind, where we consider handcraft the highest quality of production you can achieve.

With that in mind, why did you choose Mexico as one of the eight global venues for your Cross Cultural Chairs project?
MATTEO GUARNACCIA: The criteria behind the chosen countries came from the intention of putting people and culture at the same importance level of chairs — a chair being the object that has the most direct relationship with the human body. So I decided to conduct parallel research in the world’s eight most populated countries, doing something between anthropology and design.

And how did the Campamento de Diseño audience respond to this project?
JOSÉ DE LA O: Commercially, the chair has gained a lot of traction, so I’m sure we’ll be seeing it as part of the Los Patrones catalogue.