This year’s COS Milan installation went bigger — as in, it was made with bold humility

The COS store on Via Brera, on the lower floor of a building with crimson-corniced windows and restrained postwar efficiency, stands its ground in front of the neighbourhood’s famed 18th-century Accademia. Inside the shop, two Spanish tourists are mesmerized by an all-white scale model of another grand Milanese building, the Palazzo Isimbardi. Their phone cameras, though, are focused on the gossamer cone-shaped growth that starts on the front gate and blooms on through the courtyard and the garden. ‘Gorgeous,’ they ooh-ed and ahh-ed. ‘But what is it?’

Back on the real thing on Corso Monforte, Arthur Mamou-Mani’s 700 apexless pyramids spread out from the front gate and on through the courtyard and the garden. Weighing more than three tonnes, it is one of the largest bioplastic 3D printed structures ever. On a matter of square metres alone, Conifera was COS’ biggest installation ever for its annual Milan Design Week outing — that’s some 25 metres long on one end. But it was also the one that allowed them to be the bigger person: for the first time since COS’ Fuorisalone debut in 2012, neither the brand nor the guest designer knew what the final installation would look like. That decision was left in the hands of parametric calculations and, most importantly, biomaterials. 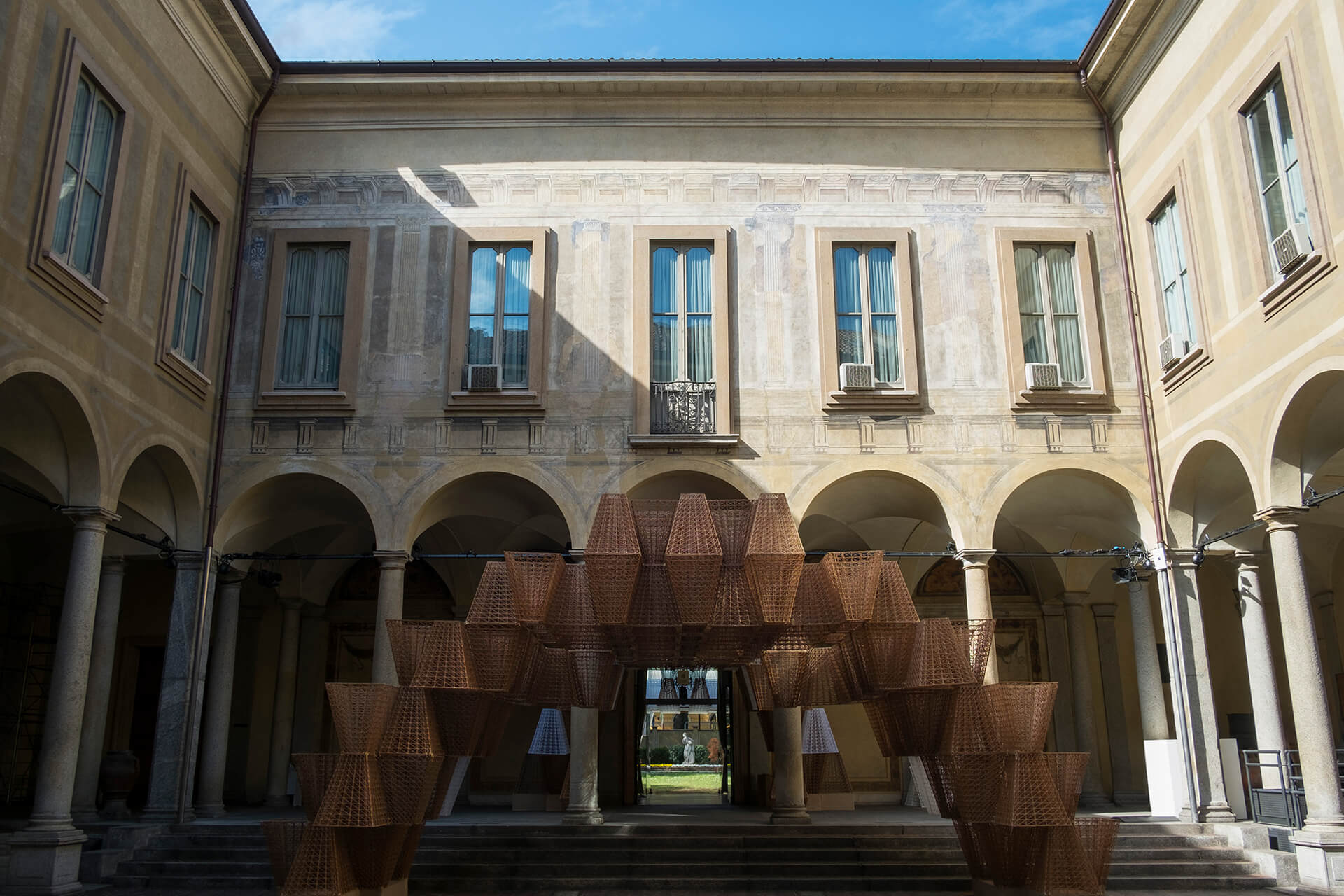 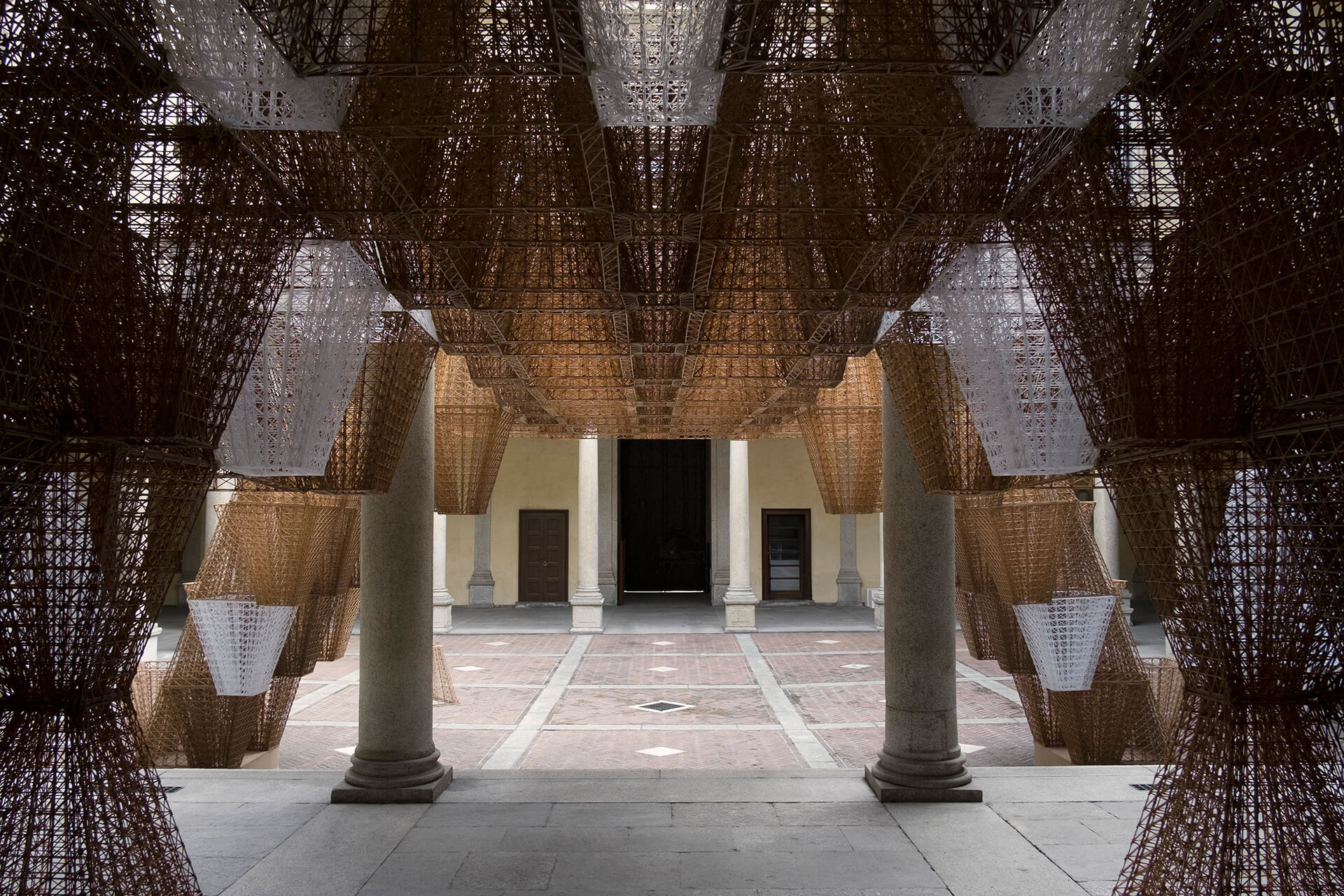 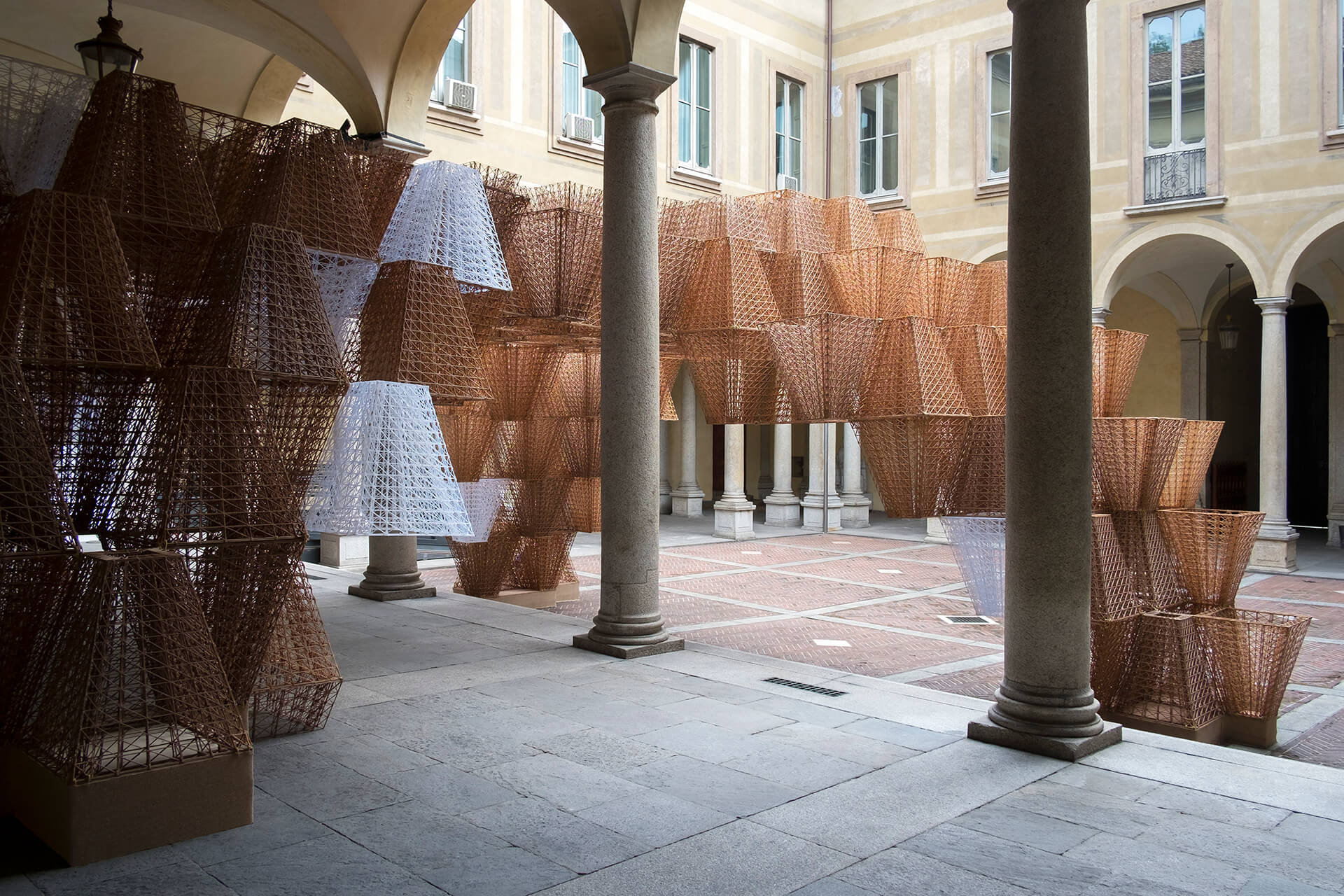 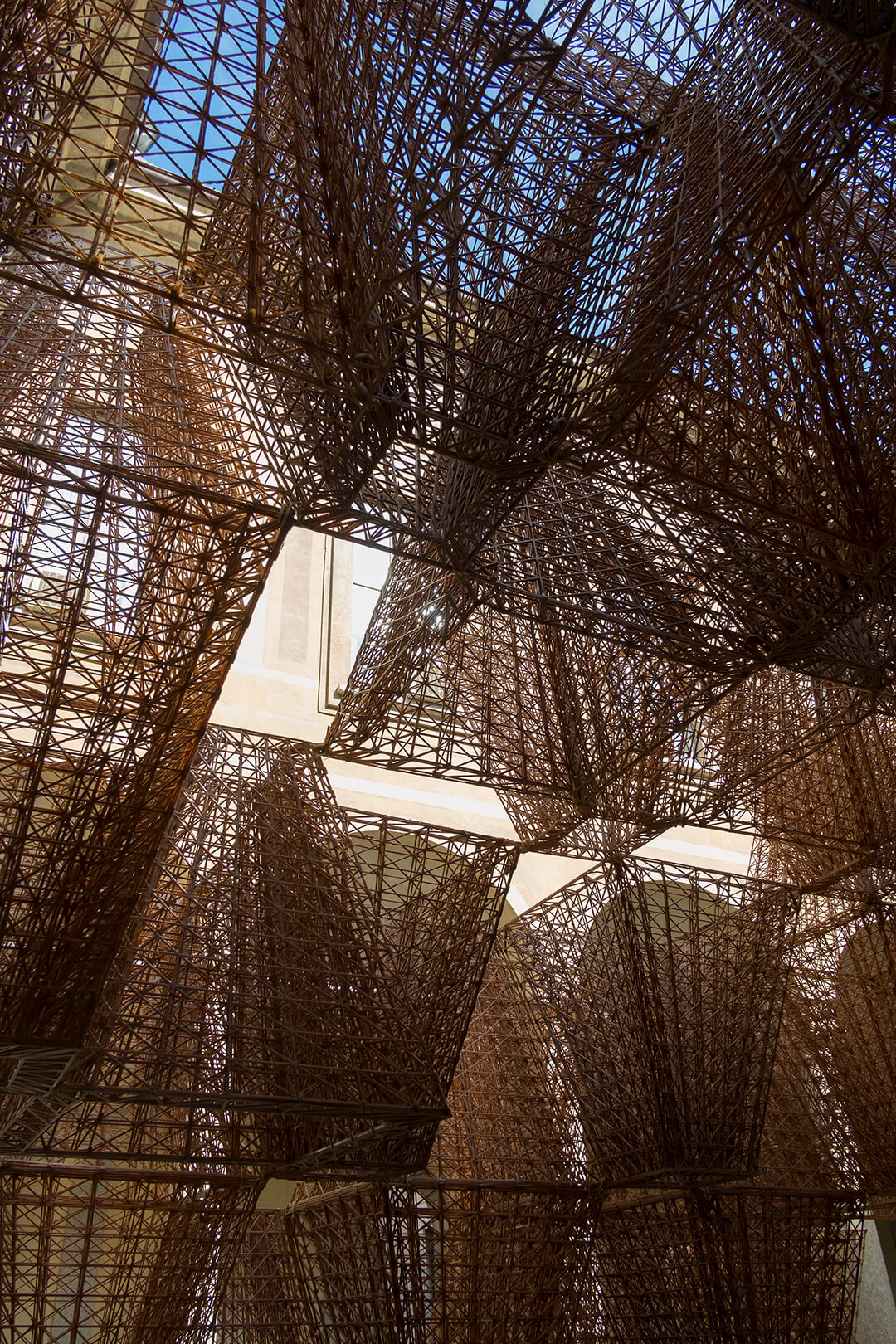 For a brand and a design event so focused on the minute aesthetic details that make up a finished product, this was a bold act of relinquishing control. And with that, the highly visible collaboration is setting a new north on the compass and sending a strong message to its peers: it is time to let the right materials speak for themselves.

In this case, it was fully compostable plastic made from a mixture of starch vinegar and Douglas fir — for all their soapboxing about designing with the future in mind, many Fuorisalone installations end up ironically becoming landfill fodder after the week is over. The resulting compound is deceptively light once printed, and yet the 3D-printed blocks can support some two tonnes. But what is the point of using such a considered material if the architect is designing for excess, with form following Instagram function? That’s why Mamou-Mani, who last year happily saw his massive Galaxia burn down at Burning Man and frequently encourages visitors to experiment with the large-scale laser cutters and 3D printers in his London studio, was such a considered choice.

This is not something done for face value: it’s a real exercise in structural optimisation

Coincidentally, the French architect also opened his studio in 2012. His generational Venn overlap is made up of an appreciation for open-source digital fabrication and the challenges of building in a climate-challenged world; thus, he became part of a crop of designers that is now rejecting the myth of the all-knowing starchitect who builds anew and aplenty, and instead embracing design humility. That’s why, instead of sketching the base element of Conifera directly, he started by analysing the vast runway of the Isimbardi and working with self-created parametric software to determine how to utilise the material most judiciously — in other words, how to use as little of it as possible and yet deliver the grandest effect in order to amplify his message of design acceptance.

‘This is not something done for face value, for technology’s sake,’ Mamou-Mani explained. ‘I believe this sort of approach can help sustainability and create lighter structures. This structure is as light as foam and yet it supports 2.1 tonnes. It’s a real exercise in structural optimisation using the computer, material science, fabrication and engineering and creates a holistic approach to design, which I hope helps the industry.’ 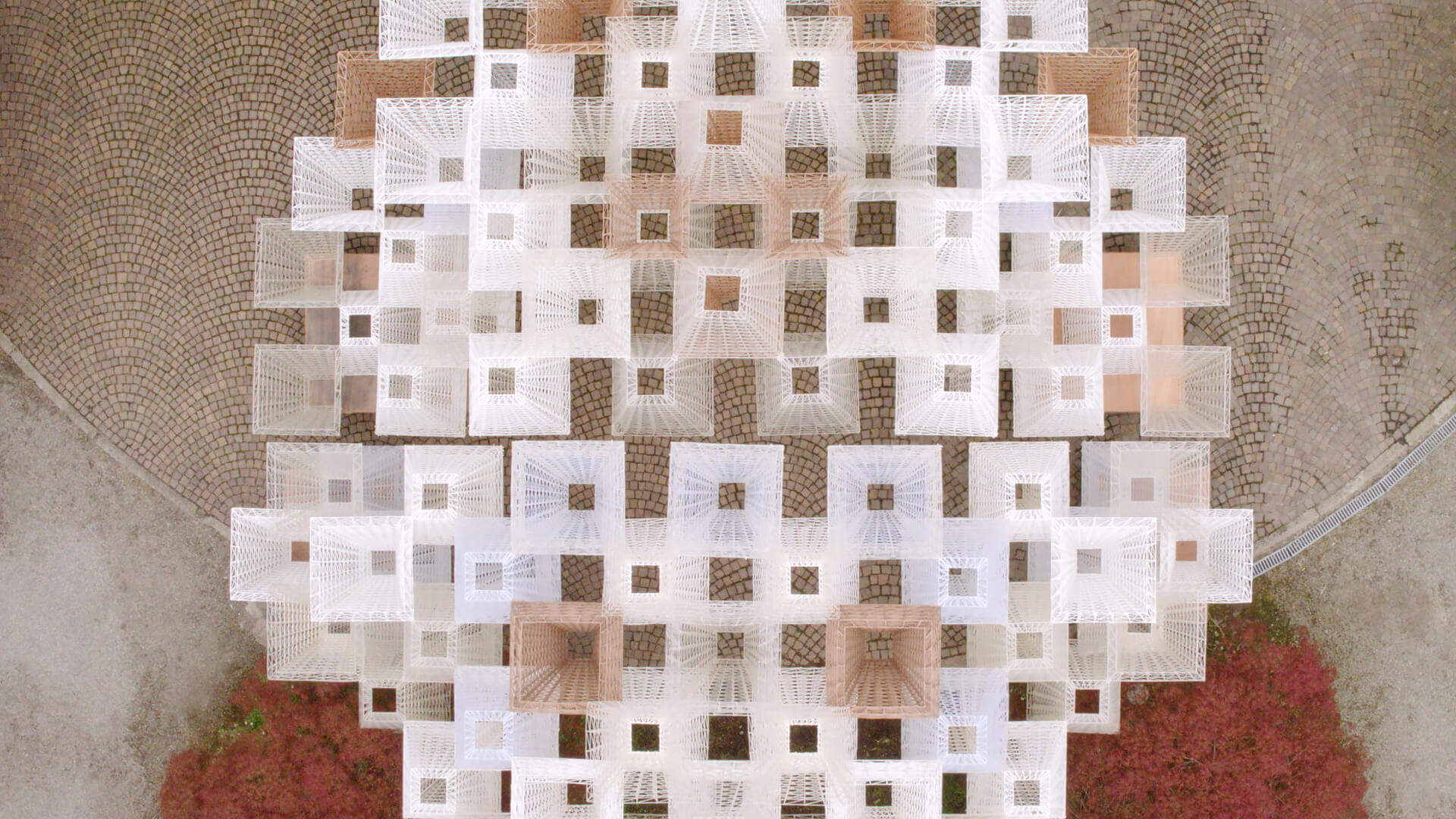 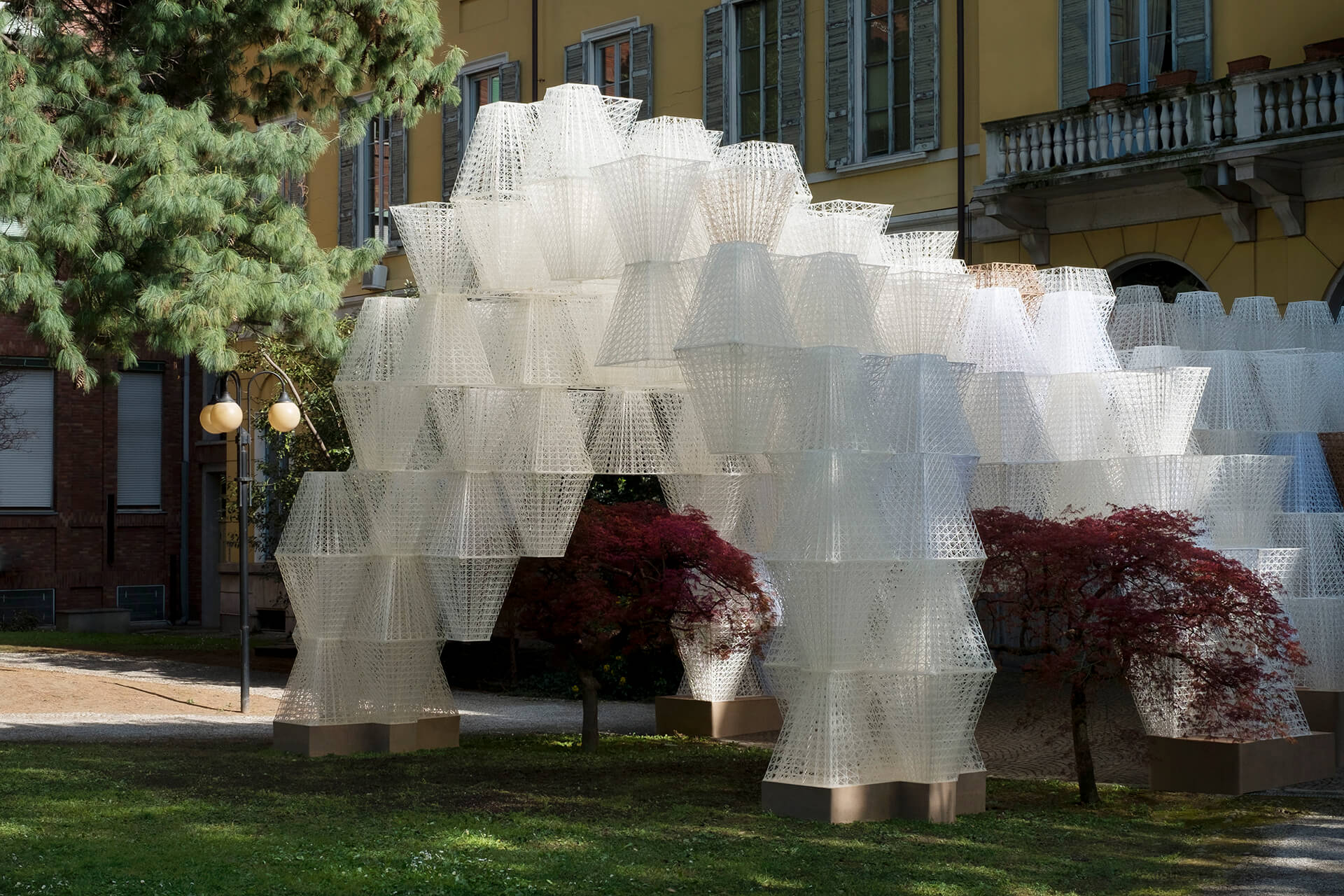 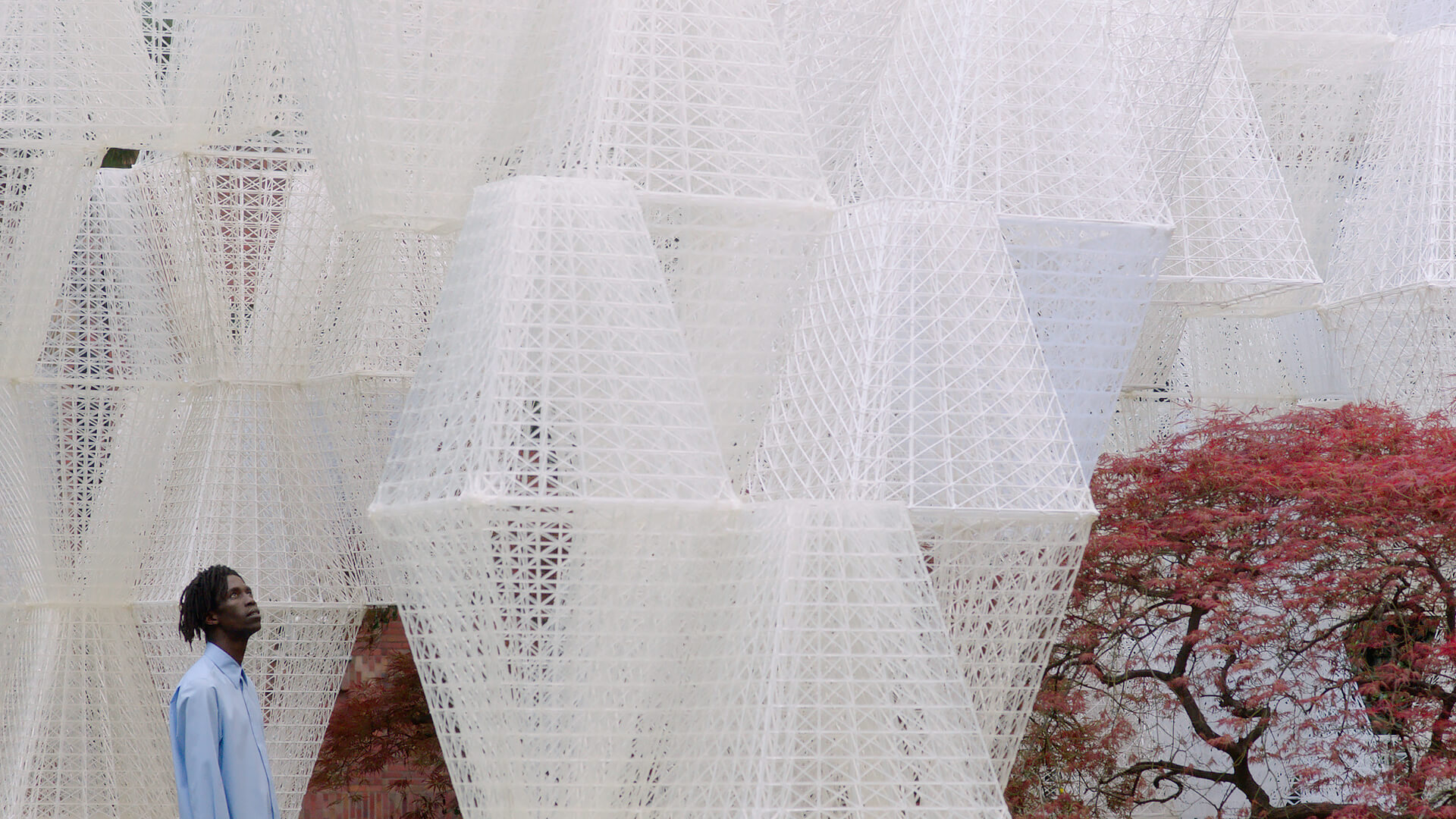 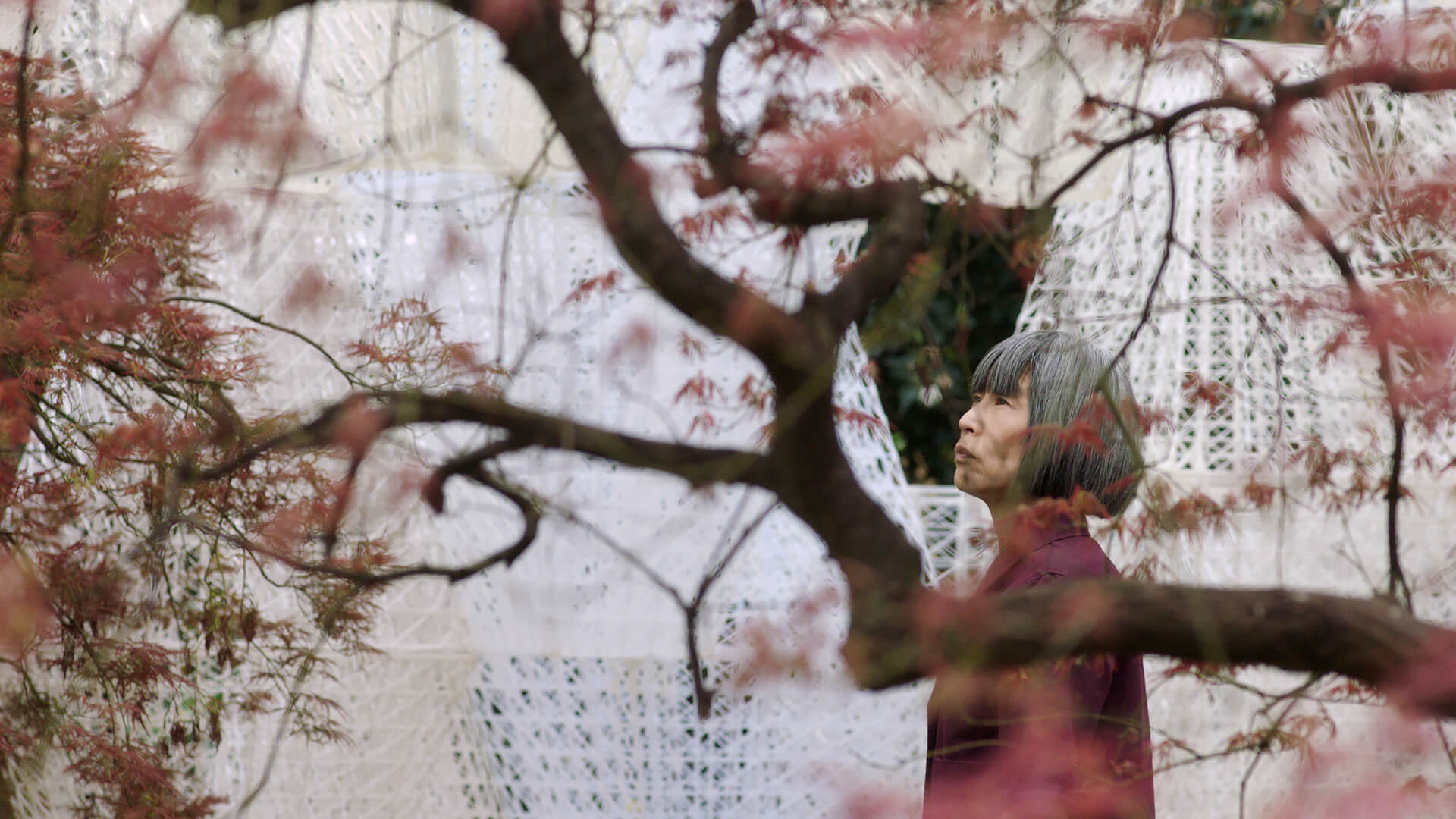 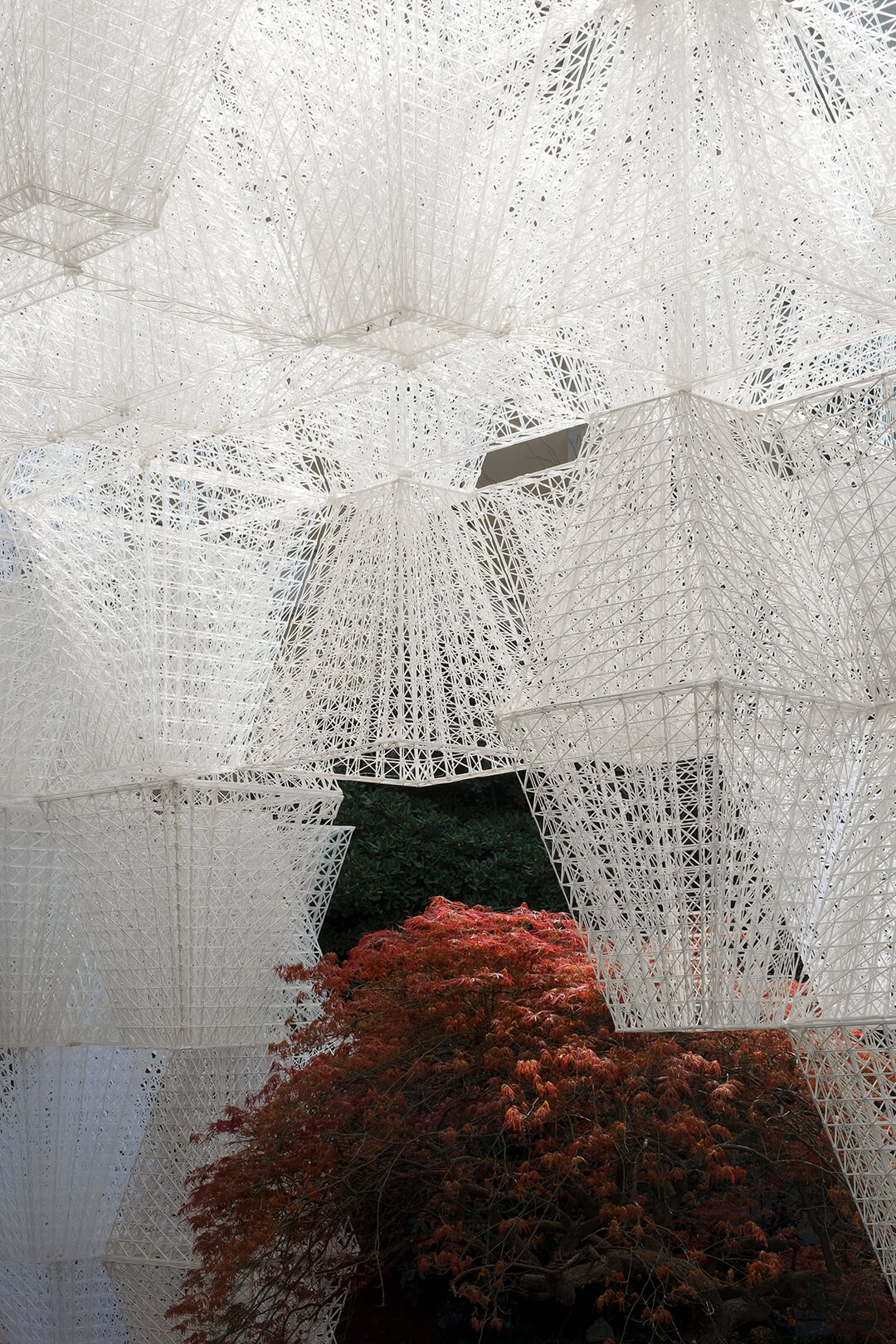 With COS’ previous Fuorisalone installations, material malleability was taken for granted — Philip K. Smith III’s mirrors, Studio Swine’s mist and Snarkitectecture’s strips of fabric, for example, are all somewhat controllable elements. But this new custom biomixture responds only to its discoverable self. Instead of a straightforward commission, this project turned into several months of research, trial and error, with Mamou-Mani and his team exploring the extent of the material’s properties, adjusting meshes and gaps in the base structure and tweaking the proportions in the plastic formula accordingly. This uncertainty was embedded into the plan from the beginning: before embarking on this process, the COS side had been open to work with a new type of schedule — one that would allow room for the unexpected. The material would do whatever it needed to do, and they would not question its path. In fact, the brief they had given the architect was as non-prescriptive as they come. Here is the venue, here is our ethos. Do your thing.

That ethos is best described as conscious scaling. The brand, founded in 2007 by the H&M group, steadily provides pieces in the 100-euro range that look, feel and act several times more expensive. Democratic, but not so much to be disposable, and well-built and timeless enough to deter is customers from quickly replacing the items. As creative director Karin Gustafsson explained during my visit to the installation, that approach to controlled consumption is the company’s raison d’être. It’s precisely that set of operating values that made Conifera such a right fit.

After sending custom code to a large set of printers in four different locations to race against time to produce the ever-changing combination of parameters and then carefully assembling the pyramids by hand, the result was a thing of enveloping calmness. While last year’s Open Sky also played gorgeously with the reflections of Milan’s spring sunlight and the palazzo’s colonnades, it was contained in the courtyard. Mamou-Mani’s 700 airy game pieces, with differing degrees of transparency that respond to the amounts of fir and bioplastic used, seemed to reach out right into the sunlight and the treetops in the garden. The more see-through versions blend in with the clouds in the sky; the darker ones, tinted brown by sawdust, somewhat mimic the stone of the palace. It is an obvious metaphor: this is a massive undertaking that, instead of overwhelmingly taking centre stage and shouting about its own present and future importance, lets the natural world and its respect for architectural heritage come through.

Some of the pieces will be fairly treated as art, seeing a second life as exhibits in COS’ Coal Drops Yard new retail-cum-gallery space. But the majority will be composted at 60 degrees right in Milan, and in one month they will leave little to no trace of their previous existence. That is a near future of architecture that, given our urban migratory ping-pong and the sheer speed of our collective lifestyle changes, would afford us the decency to design for the unexpected, with both beauty and planetary health in mind. Considering the temporary might aid our permanence.

But can it also be the near future of retail? Back in the Brera store, a beautiful bulb-like grey shift caught my eye. Perhaps too faithful to its northern European roots, COS’ pieces are built with the tallest of ectomorph humans in mind, and this maxi dress is no exception. It’s 100 euros but looks and feels and acts several times more than that, yet I do have to factor in the short tax — that is, the 15 euros I usually have to pay to tailors here in the Netherlands to considerably hem every piece I buy, as I am 160 centimetres tall in a subcontinent of giants. The reasons for designing for the greatest common height denominator are obvious and makes business sense, but at the same time, not accounting for unexpected fit and height translates into waste material and underserved potential customers. But does this Milan experiment point to COS finally being the one large retailer to break the mass-market custom 3D printing barrier? Can its next foray into bold humility be formally putting the last steps of design into the hands of its customers? Given its track record, the power of its scale and the idea of timelessness already embedded into its DNA, few brands would be as right for the task.