Designers Jaehoon Jung and Hoyoung Joo envision a future where cargo drones can be used to deliver inflatable prefab housing units to locations preselected by travellers.

In the lead-up to each issue, we challenge emerging designers to respond to the Frame Lab theme with a forward-looking concept. Remote travel destinations are growing in popularity as consumers increasingly seek exclusive, once-in-a-lifetime experiences. But how do you offer hospitality in uncharted environments?

In our May/June 2020 issue Frame 134, three emerging designers shared their ideas. Designed to host three to four guests, SF-SO’s fully equipped and self-sustaining hospitality units are dropped off by drones and inflated on site. Cofounded by Jaehoon Jung and Hoyoung Joo, SF-SO is an industrial design practice based in San Francisco and Seoul. In addition to running the studio, Jung works at Yves Béhar’s Fuseproject, while Joo started his career at LG Electronics and now codirects the consultancy Intenxiv.

What were your first thoughts when pondering this challenge?

JAEHOON JUNG: When Hoyoung Joo, with whom I cofounded design studio SF-SO, and I were approached to explore future possibilities for remote lodging, we wanted to take responsibility as designers and minimize the negative impact hospitality spaces can have on the natural environment.

What do you suggest?

HOYOUNG JOO: To make the most of modern technology and use cargo drones to deliver inflatable prefab housing units to locations preselected by travellers. Cargo drones are very suitable for this, because they are able to ascend and descend vertically and can thus do their drop-offs in more off-grid locations. And because the units will be picked up and returned to their distribution centre afterwards, their impact is limited.

What inspired your idea?

JJ: The idea of the cluster housing units is inspired by the Dymaxion house conceived by Buckminster Fuller. The late architect challenged existing homebuilding techniques by designing factory-manufactured and resource-efficient kits with which houses could be assembled on site. An important consideration of the design was ease of shipment and assembly. The units could be clustered like a small town, and be mass produced. 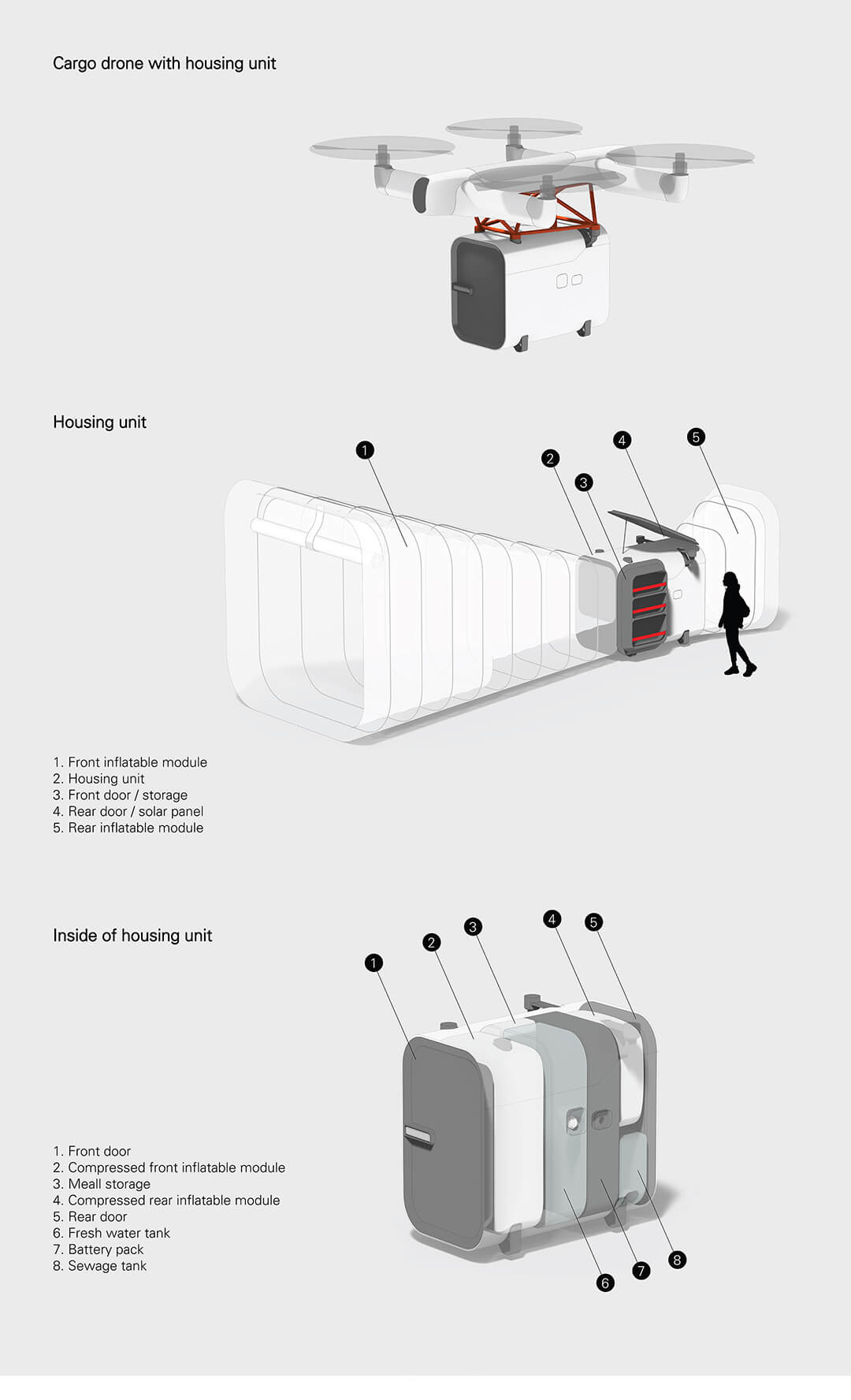 What will your units look like, after being transported and popped up?

JJ: They are box-shaped and have four hooks at the top for easy transportation. Each cuboid is approximately 1.5 m wide and 2 m high and made of aluminium for strength and durability. It will comprise two inflatable modules made of very light and durable polyester. Their shells are waterproof and composed using TPU sealing.

HJ: When the housing unit is dropped at its destination, the traveller can open a lever on the side of the unit. This lever helps to open a front and rear door at the same time and activates the air compressor inside the unit, allowing it to inflate both soft shells. Necessities are stored between the shells, including a freshwater tank, a heating system to control room temperature and food supplies.

What do the inflatable spaces contain?

JJ: They are fully equipped, self-sustaining and designed for three to four guests. One houses the basic residential facilities for sleeping, relaxing and dining, the other is home to the toilet and shower. By separating the rest area from the restroom, guests can easily distinguish each space. The furniture is built in and will expand along with the rest of the module when inflated.

Other than picking up the units after a guest’s stay, how do you limit their footprint?

HJ: For one, we suggest that our guests don’t cook their own meals in the unit, in order to reduce food waste and environmental pollution, and to avoid irritating wild animals. Similar to an airline’s meal system, travellers will be provided with a well-thought-out meal plan based on their length of stay. The meals will be dropped off with the unit by the cargo drone, and guests can easily heat them up in the built-in oven.

JJ: And all garbage will be collected in a built-in tank, so there’s no rubbish left on site.