This week, Instagram’s sneaky gossip of an algorithm showed me (twice) a sadly relevant ad: Zilveren Kruis, a local healthcare provider, has come up with the Zitcheck. As the Dutch sit an average of 8.5 hours per day, the highest number in the European Union – and no, it doesn’t take bike rides into account – the online questionnaire helps people determine the negative impact of this now normal work habit. Sitting, in terms of health, is the new sugar is the new smoking – although the exact reasons are unclear, people who put buttocks-to-chair for most of the day have an increased risk of death from cardiovascular issues and cancer.

To add insult to back injury, the Netherlands is also the country with the tallest men in the world, and thus Amsterdam certainly has more physiotherapy offices than your average EU country: men here have spinal pain like the French have dissenting opinions on pain.

Take, for example, sound designer Mark IJzerman. I interviewed him last week to discuss his participation in the Sonos and Studio Lonk project for Dutch Design Week – read about the aural installation here if you haven’t yet – but a seemingly throwaway bit of our conversation stuck with me: as he is two metres tall, he has found that working lying down on a yoga mat is the most productive solution for his lumbar ailments. As the surface is hard, it has helped with straightening his spine, ‘as opposed to the couch, which is comfy, but not good for my back.’ And as he mostly does electronic work for art installations, with supplies too large to fit on his regular desk, the setup proved twice as beneficial.

First we sat, then we had standing desks – but who can afford that – and now we’re adding horizontal positions

But there’s a caveat. ‘The position still puts a bit of strain on your neck, so working like that for more than four hours is not possible,’ he explained. ‘I think it should be added to our scale of positions: first we sat, then we had standing desks – but who can afford that – and now we’re adding horizontal positions. I think it’s all about having a dynamic working style.’

The design industry is slowly but surely responding to this desire for new dynamics, and it seems about to reach a tipping point towards the mainstream. Take, for example, Pallavi Dean’s proposal for the new Edelman offices in Dubai. As the employee age groups in the PR agency are wide-ranging, Dean’s Roar team decided to do a series of surveys to properly ascertain what each cohort expected from the new space. Junior staff, it turned out, wanted a separate lounge area within the office, where they could ‘lie on the floor’ to work – yes, that quote did come verbatim from the resulting report. The designer and her team responded with a padded room with slim bean bags, where team members can work to their back’s content. 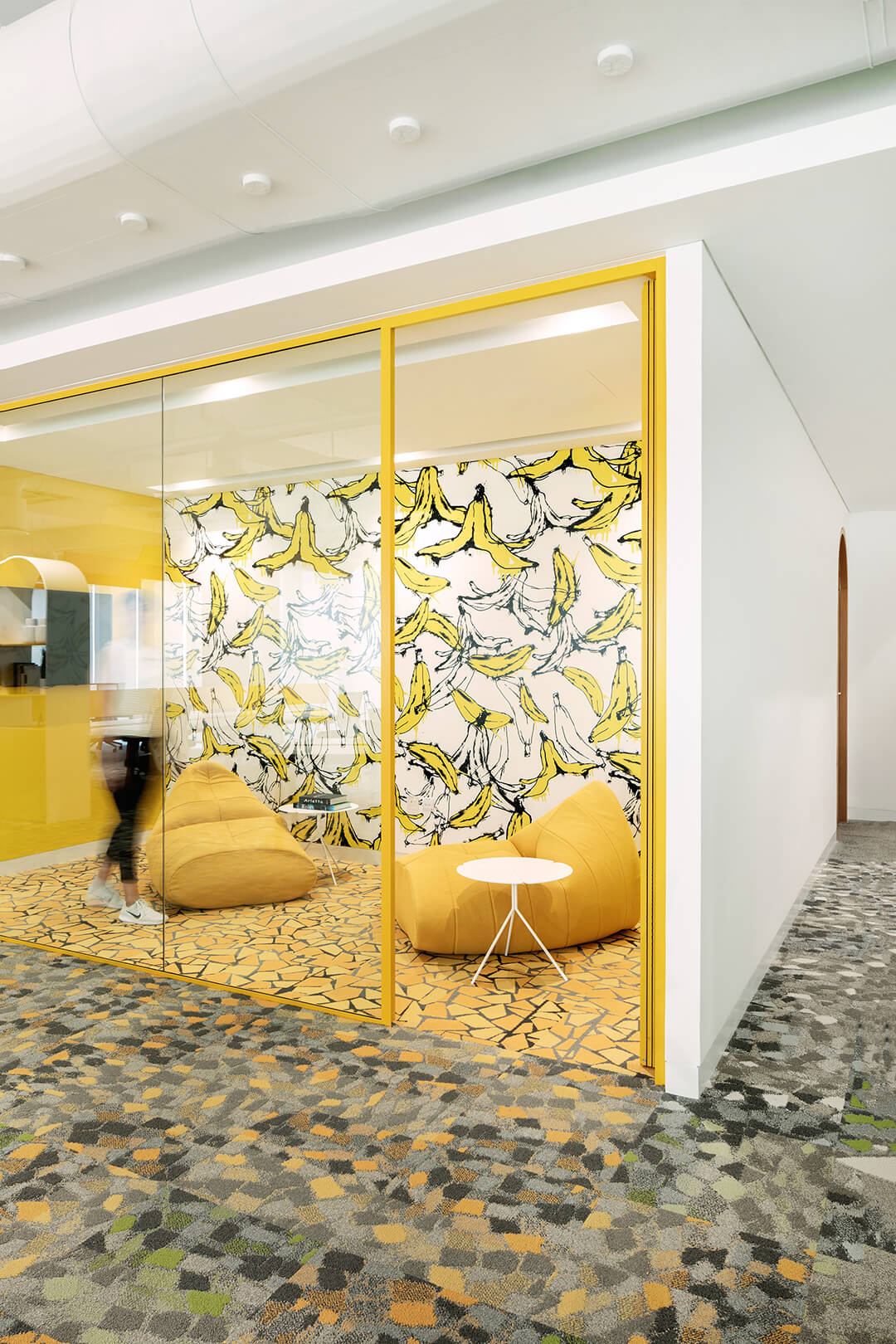 Want more proof? Last week, we received notice of Microsoft’s upcoming opening of their D/Dock-revamped office space near Schiphol, here in the Amsterdam area. The main image for the press kit? A render of an employee using her laptop while sitting on a yoga mat.

But perhaps not every workplace has the available space or the clean-slate opportunity needed to invest in a new horizontal setup, and if this custom is to reach critical mass, it could meet offices halfway. That’s why furniture designers are responding with measures that allow for spatial flexibility while still providing the benefits of the relaxed body position. In 2015, California-based Altwork came up with an all-encompassing workstation that allows users to work lying down – but even at around 5,000 euros per unit, it sadly looked more like a bulky dentist’s chair than anything with remotely positive associations.

That same year, Dutch manufacturer Prooff released the OffSize collection, a series of playful seating elements featuring three posture layouts: standing, leaning and lounging. At the most recent edition of the Orgatec trade fair, only the first two were on display, as they have been by far the bestsellers of the family. While the target audience does acknowledge the comfort of the third option, they mostly associate it with leisure reading or relaxation instead of work. ‘We gather that, right now, the perception for the lounging version is that it’s a better fit for educational purposes,’ explained Prooff’s Leo Schouten. 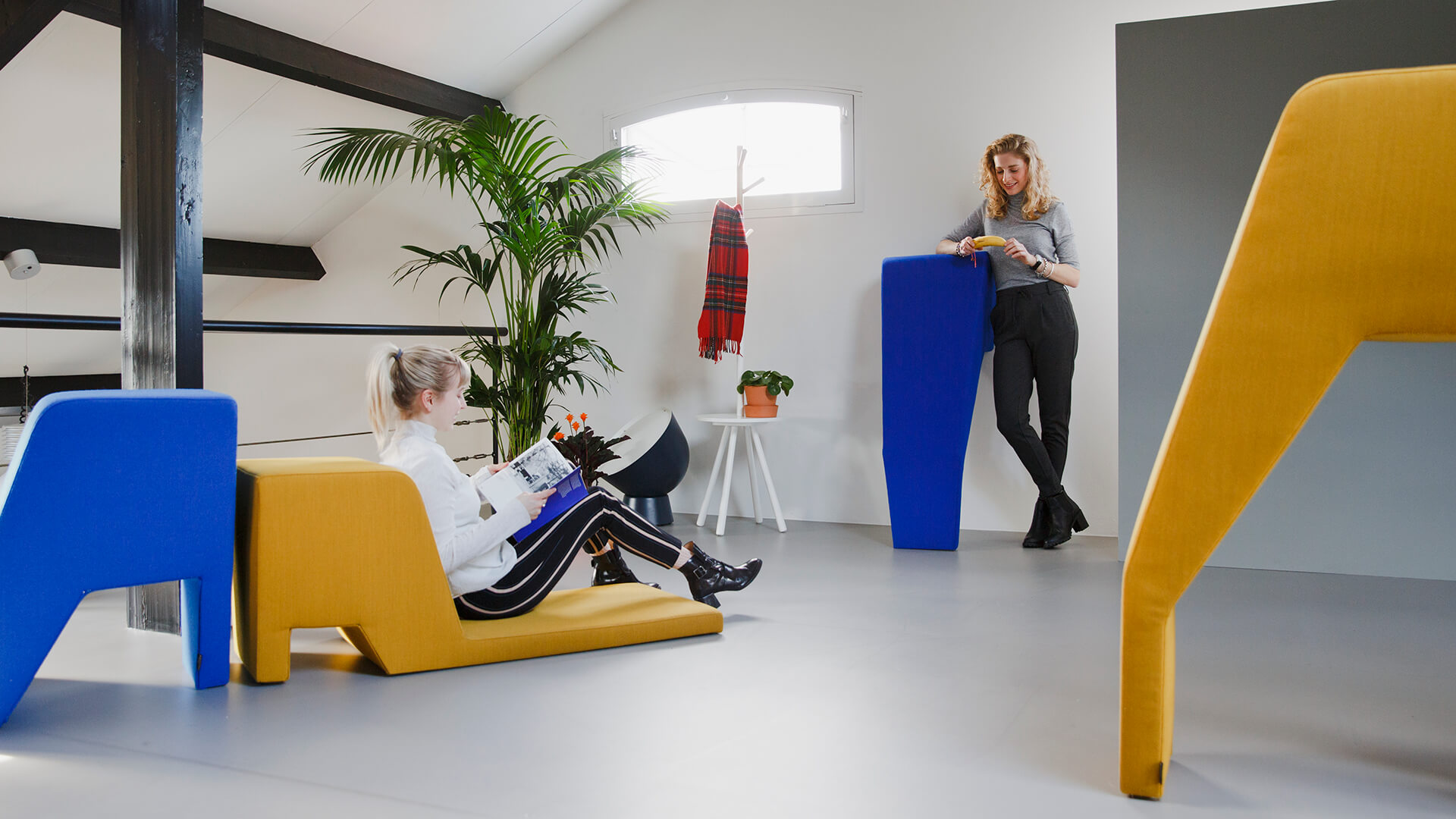 In yellow, the OffSize lounger, designed by Léon de Lange for Prooff – Photo courtesy of Prooff

But designers keep pushing through. At this year’s Design Academy Eindhoven graduation show, Public/Private alumnus Geoffrey Pascal presented his own experimental take. Titled Grafeiphobia – that is, fear of the desk – his furniture proposals were inspired by the comfort and heightened productivity many people experience while working from bed. ‘But this piece of furniture is not an invitation to snooze off,’ he said. Based on NASA’s Neutral Body Posture research, meant to optimize the wellbeing and efficiency of astronauts during their long journeys, Pascal created pieces that redistribute body weight to make things less stressful for the lower back and the shoulders. There’s the lounge-chair-like Basic Besk, the lateral oddity that is the Triclinium Gum and my favourite, the stomach-to-foam Flying Man. The resulting position for the latter looks, fittingly, like Robin van Persie’s legendary 2014 World Cup wondergoal: both the Flying Man and the Flying Dutchman state that there’s no need to have your feet on the ground in order to achieve great things. 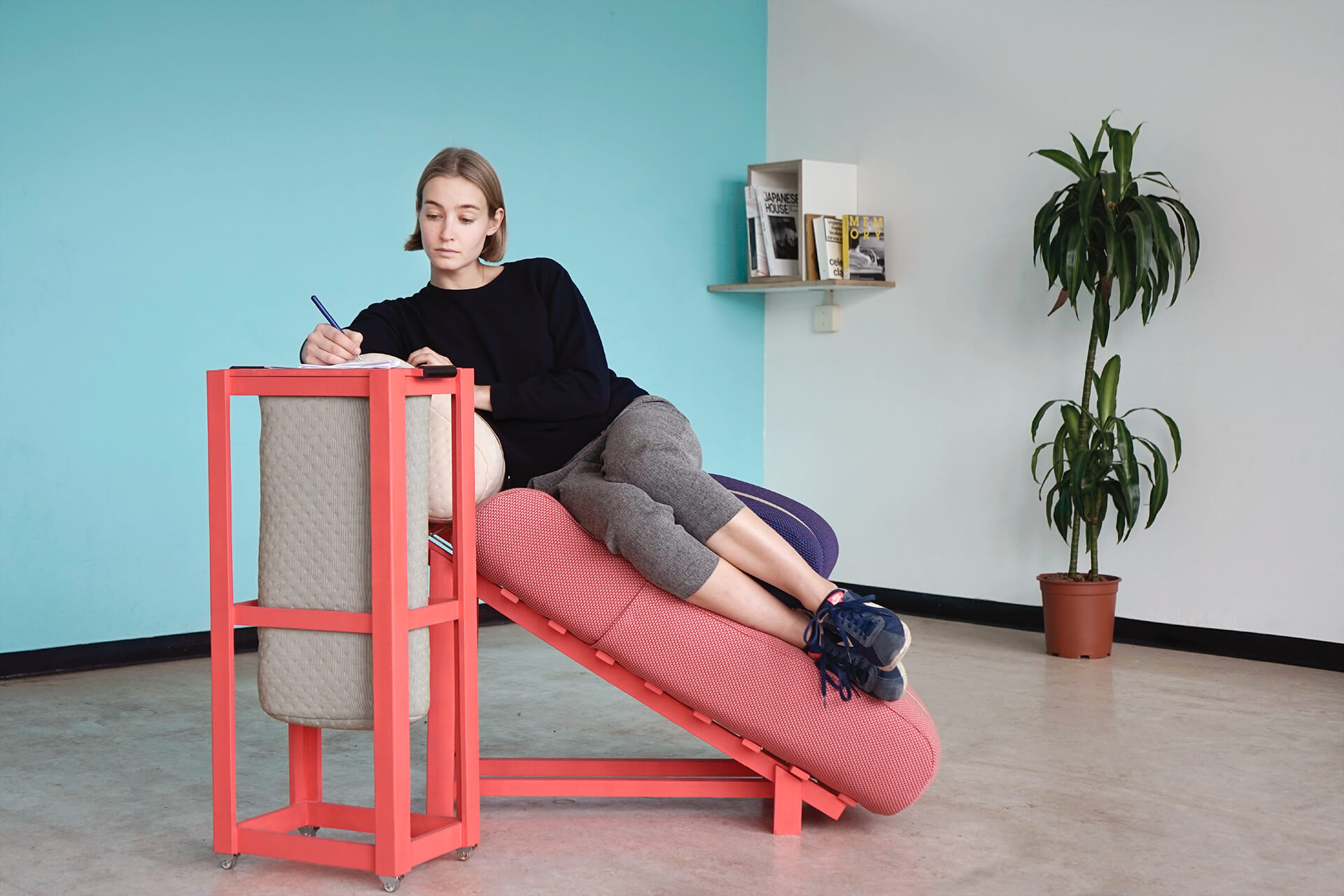 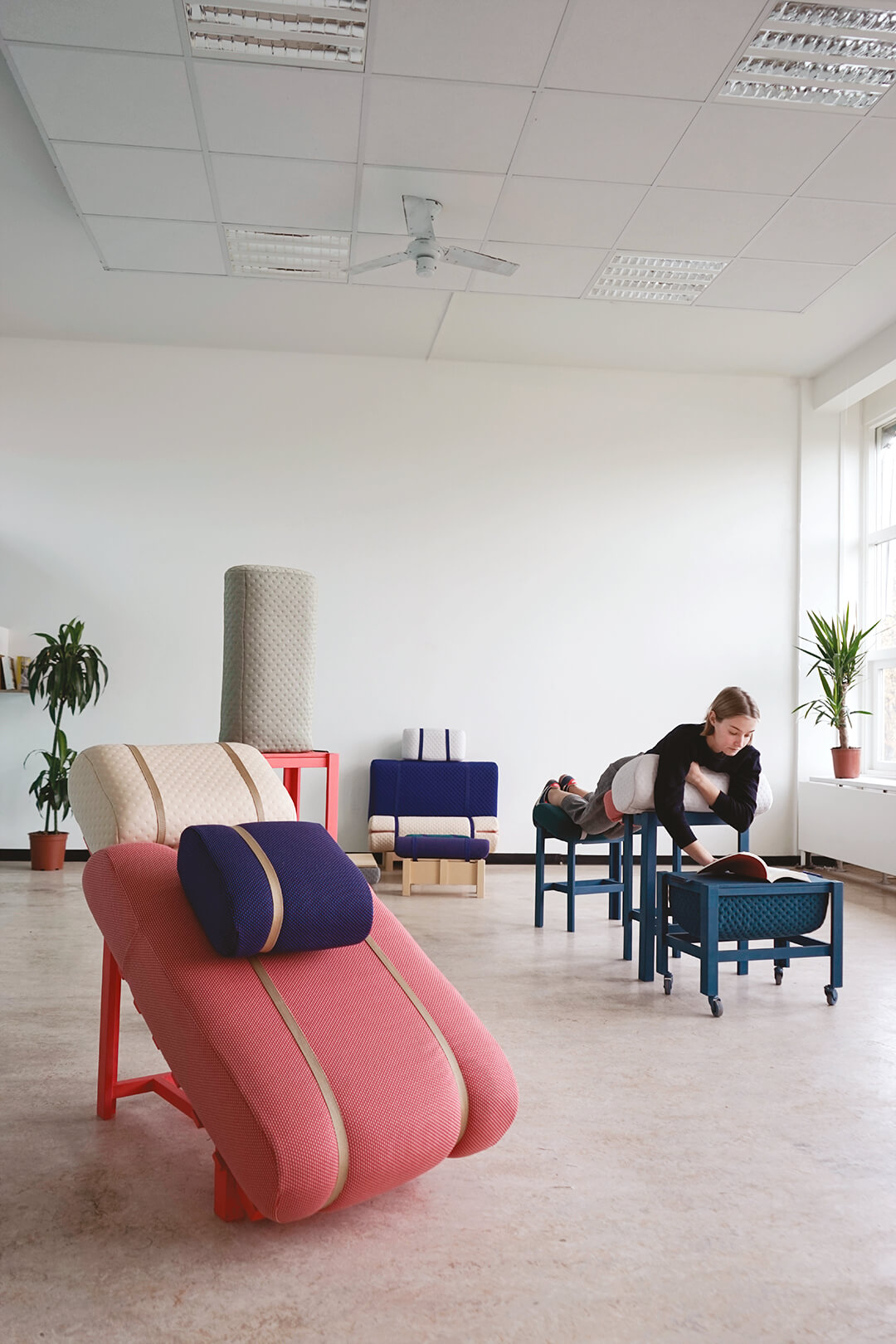 ‘I could see [these chairs] in a big office, in a special room just for them,’ said Pascal. ‘But the most difficult thing to fight against is our culture. We need to understand that there isn’t only one way of working. We spend so much time at the office that it should be a more welcoming place.’

Indeed: even if the design industry is successful in providing a viable horizontal alternative to the current workspace, the first step towards changing our working positions is to change our positions on the matter: we need to normalize the idea of seeing people lying down on the floor, belly-to-rug or back-to-yoga-mat, as employees as professional and productive as their regular-sitting counterparts. We need to stop shaming those who prefer to work horizontally. Stop using bed-loving remote workers as punchlines – instead, follow the lead of Beatriz Colomina and her plea for the bedployees. Stop thinking of the office lie-down as yet another millennial eccentricity. We need to make the word grafeiophobia happen. If you’re the head of an office, make it a point to try out dynamic seating setups. We need to do all of this as if our lives depended on it… because, judging by those troubling health reports, they actually do.