What does the new BMW Concept i4 have to do with Inception?

We’re no longer asking who killed the electric car? The real question now is who’s designing the latest and greatest? For BMW, the launch of a pure electric Gran Coupe marks a new chapter in the automotive brand’s history. ‘The BMW Concept i4 brings electrification to the core of the BMW brand,’ says Adrian van Hooydonk, senior vice president of BMW Group Design. ‘The design is dynamic, clean and elegant. In short: a perfect BMW that happens to be zero emission.’

Often, the most memorable image we have of a car is its front face – like a human face, it expresses an immediately recognizable identity. For BMW, that signature ‘look’ is its ‘twin kidney’ frontage. When creating the BMW Concept i4, the design team wanted to ‘lend a visually powerful face to the electric age at BMW’, giving the car a prominent, closed-off kidney grille that ‘provides a tangible connection between the past and future’ of the brand. Funnily enough, it’s a feature that’s in theory no longer necessary – the grille once helped to cool the combustion engine, which the electric motor has since replaced. But the familiar face of BMW now has new functionality: the BMW Concept i4’s grille serves primarily as an ‘intelligence panel’ housing various sensors.

Just as the grille may no longer technically be needed, an electric car makes a lot less noise than those with a traditional combustion engine. But for safety’s sake, sounds are added. Rather than make this a mundane feature, BMW sound designer Renzo Vitale teamed up with world renowned composer Hans Zimmer (The Lion King, Inception, Interstellar). Under the brand name of BMW IconicSounds Electric, the pair aimed to ‘emotionalize BMW’s electric vehicles and make them audible using individual sound worlds’. They also developed the sounds of the door opening and the starting scenario. 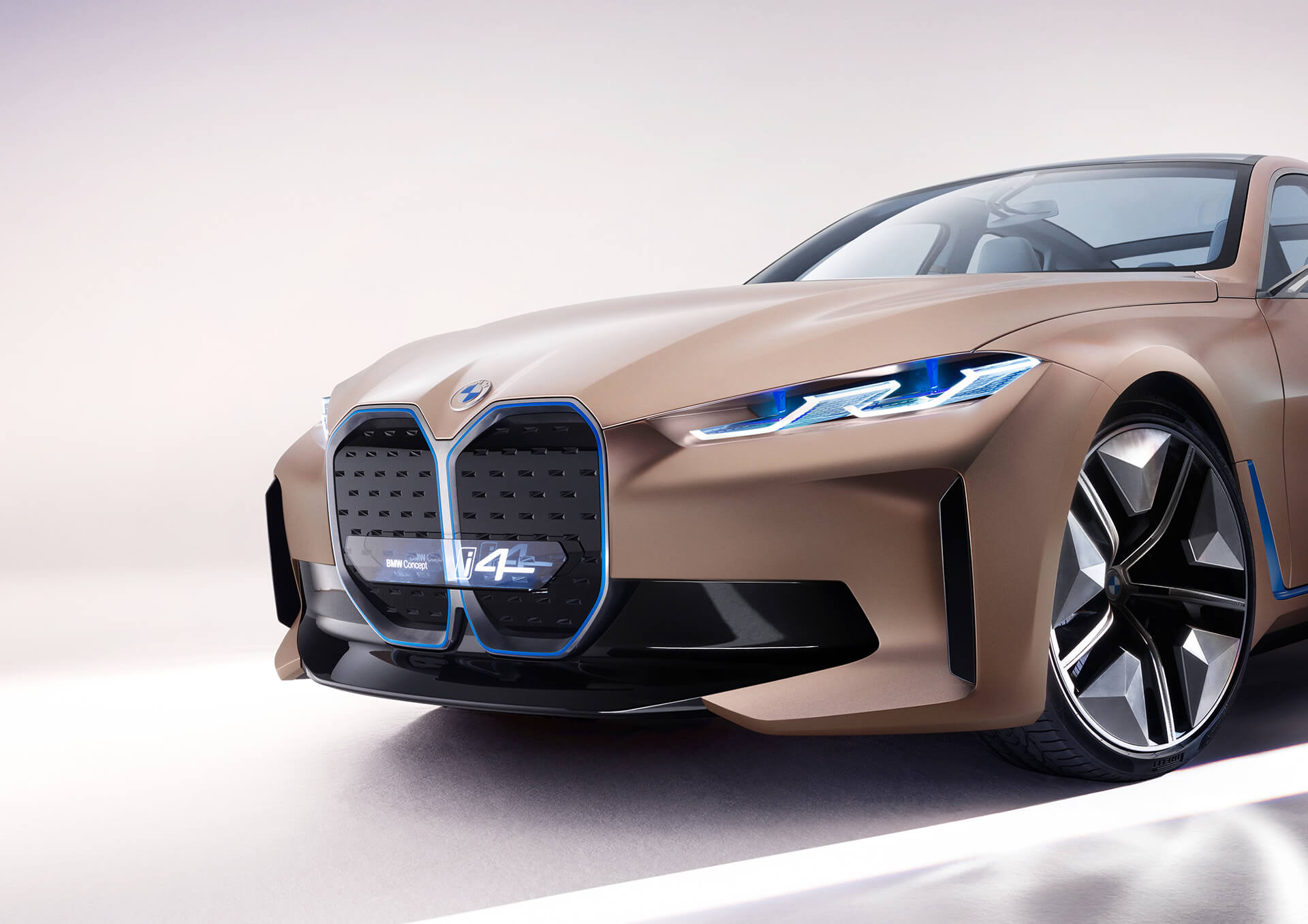 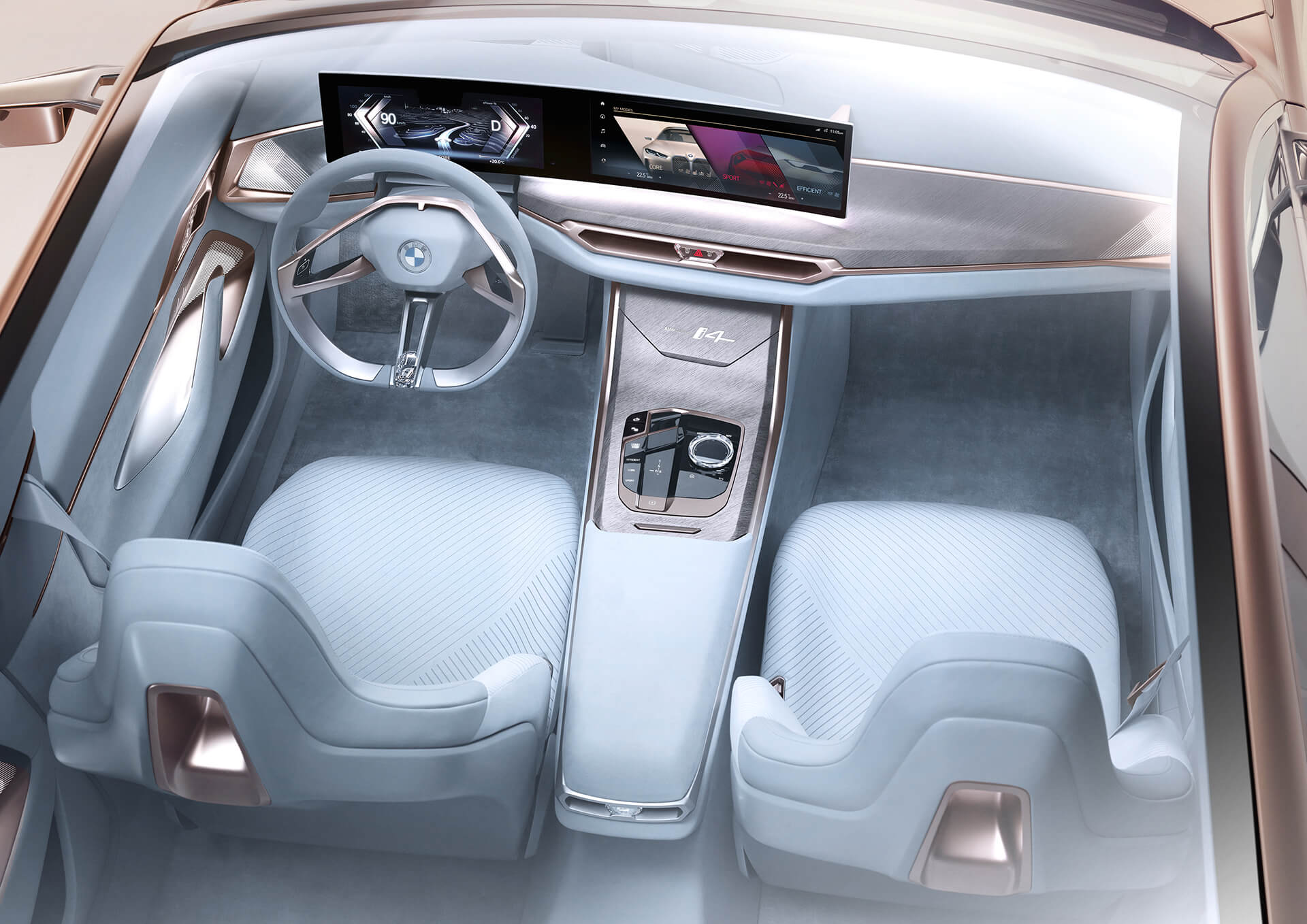 The BMW Concept i4 offers a much larger interior than the car’s proportions suggest. It’s a car designed to be driven, not auto-piloted, which is why every element in the front of the cabin is aimed at the person behind the steering wheel. A sneak peek of what’s to come in the production versions of the BMW iNEXT and BMW i4, the combination of the steering wheel and a new curved display offers a fresh take on driver orientation. The presentation surfaces of the information display and control display merge into a single unit inclined towards the driver – a move that optimizes the way information is presented and makes the display’s touch operation more intuitive. ‘Pared-down design’ runs through the entire concept, from material choices to control arrangement. When possible, this approach means some elements – air outlets, for instance – are almost invisible.

To mark the launch of the BMW Concept i4, BMW Design collaborated with photographer and visual artist Clemens Ascher on a special photo series. The Austrian creative, known for his surreal aesthetic, places the BMW Concept i4 in a futuristic setting. The monumental architecture and enlightened sky with its expressive colours creates a scenery reminiscent of a dream world.

Keep an eye out for Frame's May/June issue to discover the full series by Ascher and BMW Design.