Hannah Black and Carla Perez Gallardo both worked on the New York restaurant circuit at the same time as trying to establish an art practice. Struggling to find their niche in the narrow confines of the city’s art scene, they soon found themselves in Hudson. Home to a tight-knit community with an open-minded atmosphere, it proved the perfect place to freely combine their passion for food and art in one creative endeavour. Their story illustrates that the move to a smaller town is not always driven by a desire to reconnect with nature. For them, the appeal was the creative freedom and the ability to thrive independently outside of larger systems on a smaller budget.

The full interview was originally featured in our publication City Quitters, which portrays creative pioneers pursuing alternative ways of living and working away from big cities.

What brought you to Hudson?

CARLA PEREZ-GALLARDO: I landed in Hudson when I came back from Madrid, where I lived for a year after college. Hudson was more accessible than New York City, and I felt like there was room for me to do what I wanted to do. The community here is made up of a lot of people who try to find their way outside of the norm. I felt potential in Hudson, which is why I stayed.

HANNAH BLACK: I moved to New York after college because that’s where everybody went. It was the centre of the art world. I lived there for 5 years and worked in various jobs. I loved it, but I also kept questioning if this was really where I wanted to be. Then my best friend from college moved to Hudson. I came to visit her a lot and just had the best time. Her community in Hudson was all doers, whereas I felt like my community in New York was full of planners or talkers.

I went to South America for 6 months and got really into this idea of wanting to work with food. When I came back, I moved to Hudson. It just made a lot of sense – it was easy. I started running a food truck, and that’s when I met Carla. We did catering projects together and eventually opened a restaurant, which never would have been possible in New York unless we had some big investors. It all happened very fast and serendipitously. 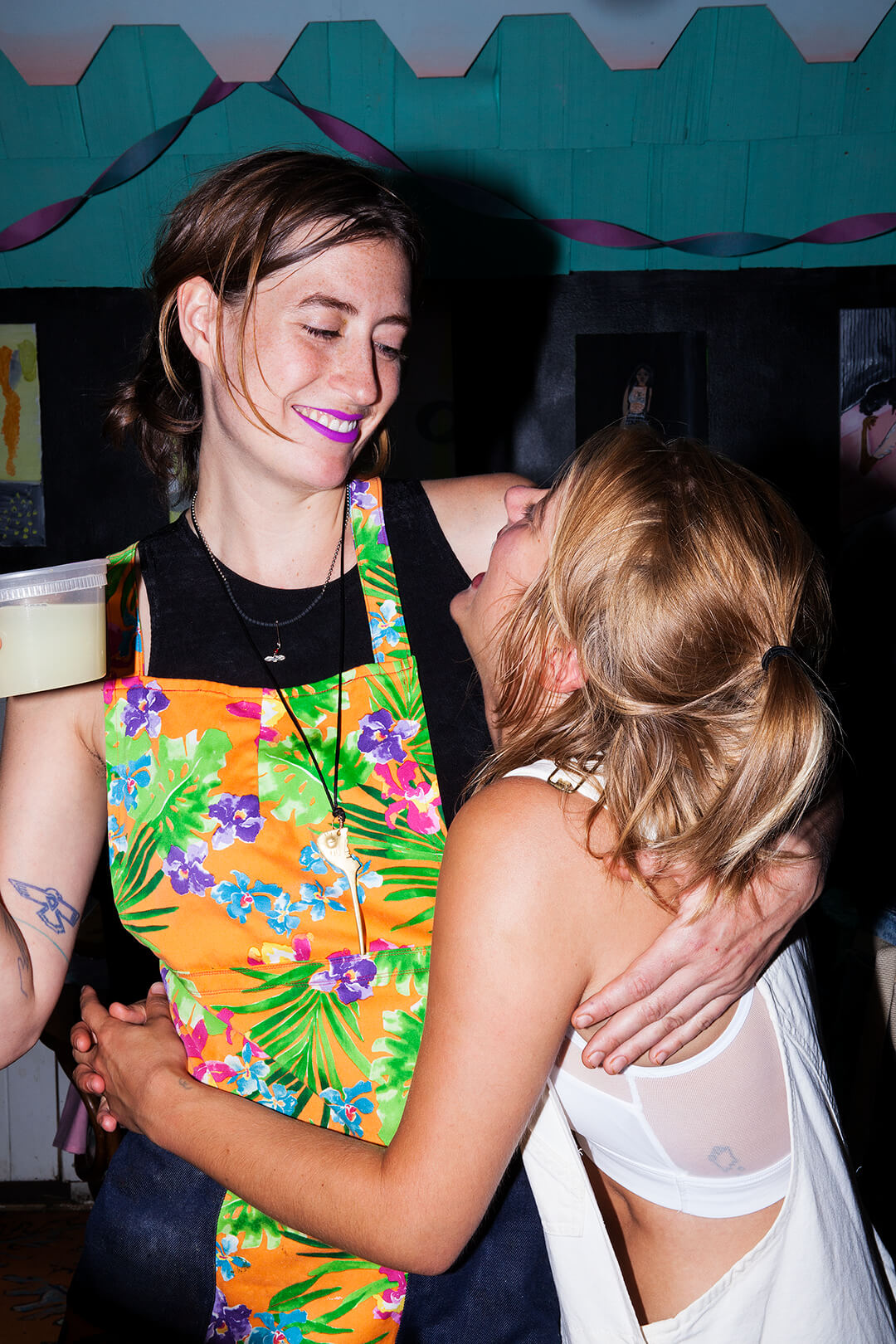 Hannah was running a food truck in Hudson when she met Carla, and the pair discovered a shared love for food and art.

When did you open your restaurant?

HB: About a year and a half ago. We had saved some money from catering, and had a little bit of help from family and friends, but it was so low budget. And we did it in a month.

CP: It felt very much about Hudson, you know. Being able to put together this passion project that, just a year and a half later, is a very real business that’s thriving in many ways.

HB: When we were doing the demolition and the construction we were able to call upon this crew of friends who not only had skills, creativity and vision but also the freedom to jump on board our project. We didn’t have money to pay them, we just offered them free food. But they had the time to come in and help us renovate the space. We couldn’t have done that in the city. All my friends there are working three jobs and would never do anything for free. 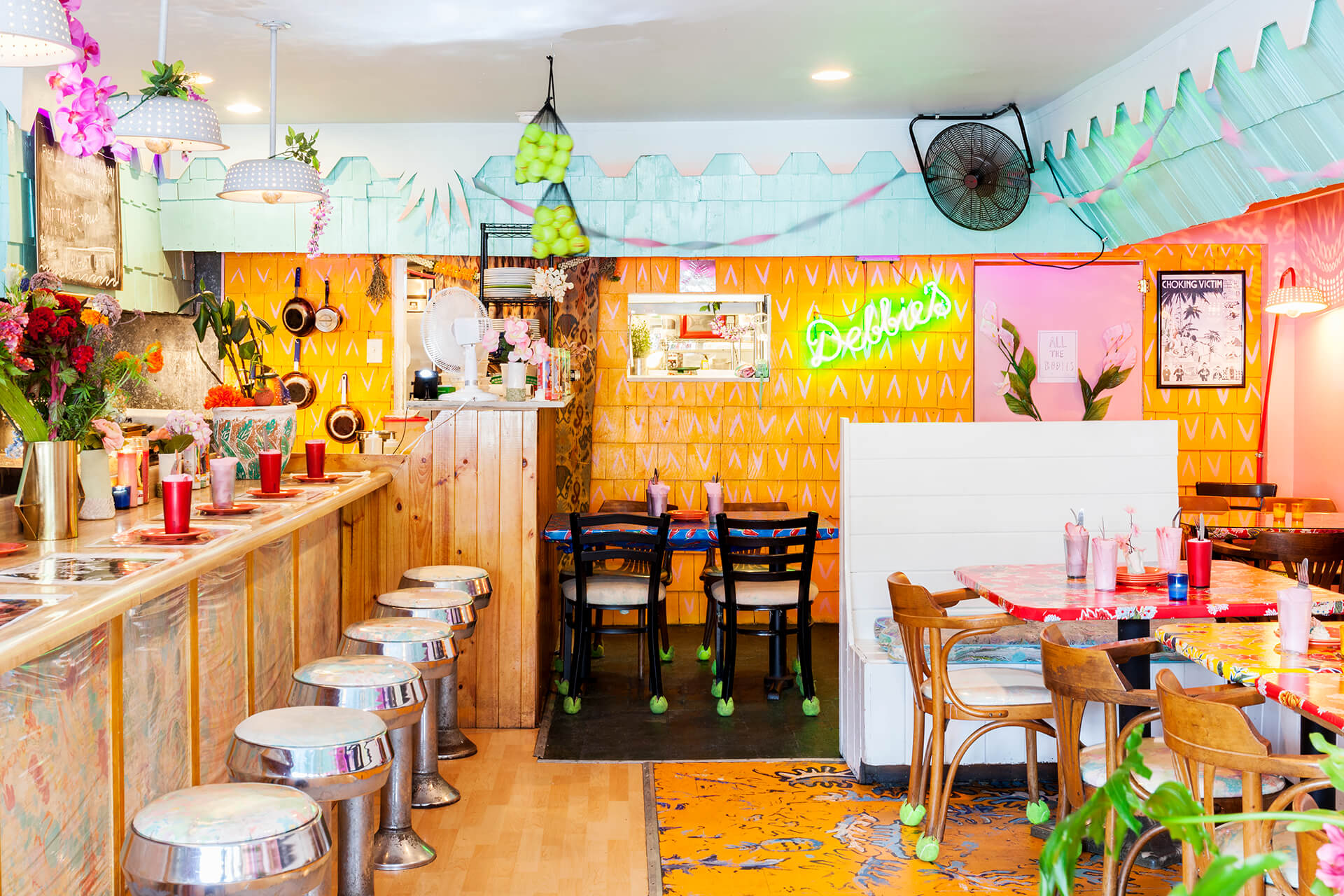 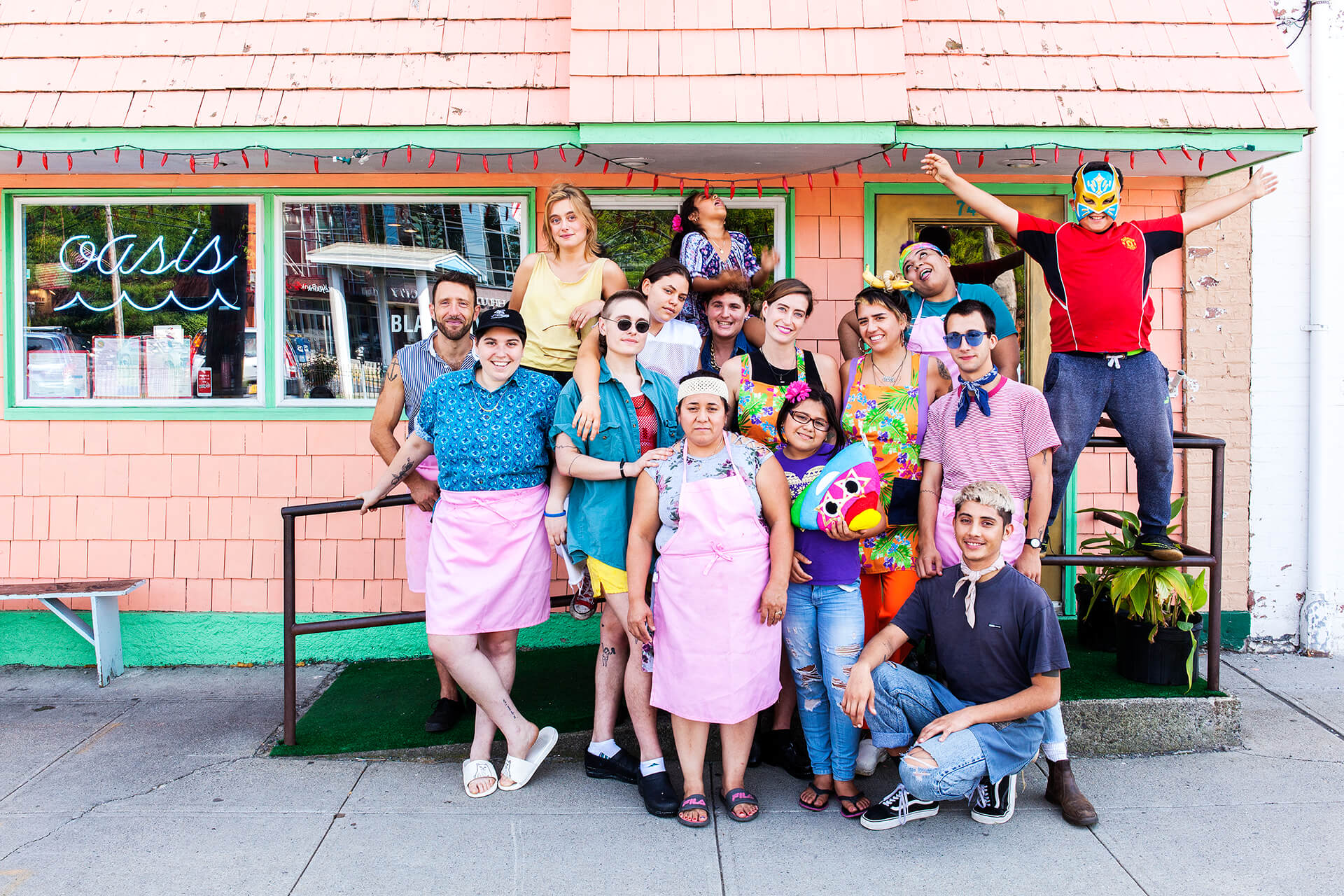 Hannah and Carla’s passion for creativity and community underpins everything they do, and one of the reasons they were drawn to Hudson was the crowd of young creatives. Many of their staff have passion projects – something they wholeheartedly support.

What is it about Hudson that attracts people like you?

HB: I think it’s a combination of things. Location is pretty crucial. It’s 2 hours north from New York City on the train, so going back and forth is easy if you do creative work that requires you to have meetings in the city. It’s also beautiful. It’s surrounded by rolling hills, and across the river there are waterfalls and mountains. There is a really fun, young, creative crowd of dancers, filmmakers, musicians and creative artists here – a lot of people to collaborate with. And the stakes are not as high. You know your rent is not crushing you down like in the city.

The community in Hudson is all doers, whereas I felt like my community in New York was full of planners or talkers

CP: People are often surprised at how vibrant it is and how much it feels like a city. One of the things that has kept me here was feeling like the dreams we have are possible in this landscape. It’s still hard, and we still worry about money, but there’s a way more tangible quality to life here. It feels so much more collaborative. It’s how I have always imagined my ideal environment. The way we’re doing things is outside of the ordinary, outside the normal structures that you need to employ in order to open a successful business in Manhattan. We were able to push our vision and keep that at the fore, as opposed to having all sorts of reality checks along the way, from investors to people limiting your voice. We had the opportunity to do it our way.

What was so different about opening a restaurant here compared to the city?

HB: We opened with no money and we opened really fast. We had the idea in January, we were offered a space 2 weeks later, we signed the lease in April and we opened in May. That timeline is highly unheard of in the restaurant industry, and definitely not in the city. We opened without any debt or investors.

CP: We did zero promotion and just launched quietly. People in the industry warned us – where was our business plan and what was our 5-year model? All of these classic and very reasonable questions [laughs]. We were just like, ‘look – we’ve been handed this opportunity and we’re not going to say no. We’re just going to take a leap and do it.’

HB: We’re still learning as we go. It’s definitely not easy. We work very hard, but we’re also able to be open 5 days a week instead of 7. It’s a much more civilised lifestyle. We work a lot but we also have a lot of fun. We can go dancing or do the occasional hike. You said that Hudson feels like ‘a community of doers’. Do you think people take more risks?

CP: The cost of living is lower and people have more time to say ‘yes’ to things. You can say: ‘Hey, wouldn’t it be fun if we did this?’ And then do it. Of course there is that ethos in New York and many things are happening, but it just feels like there is more time and space to make it happen here. 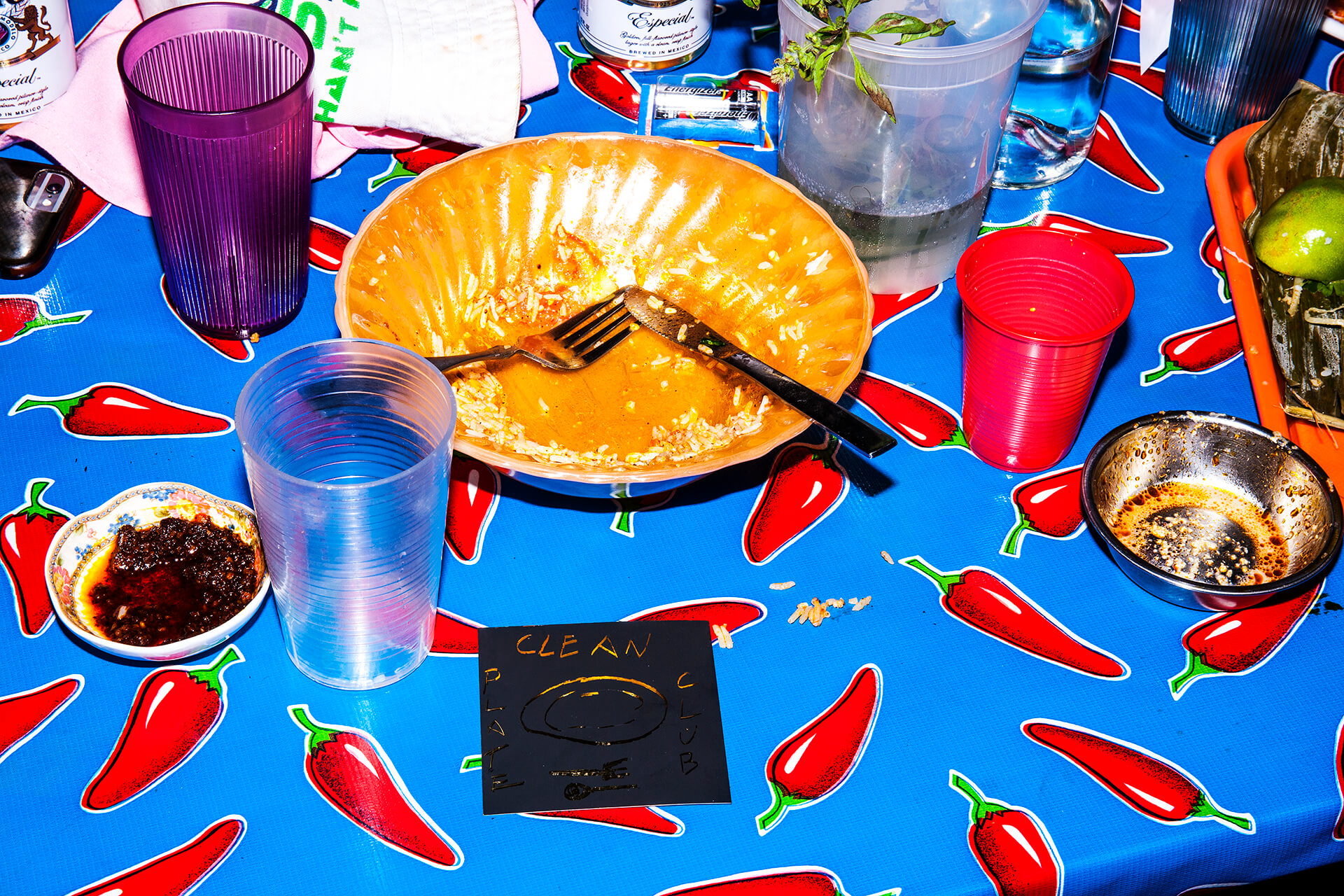 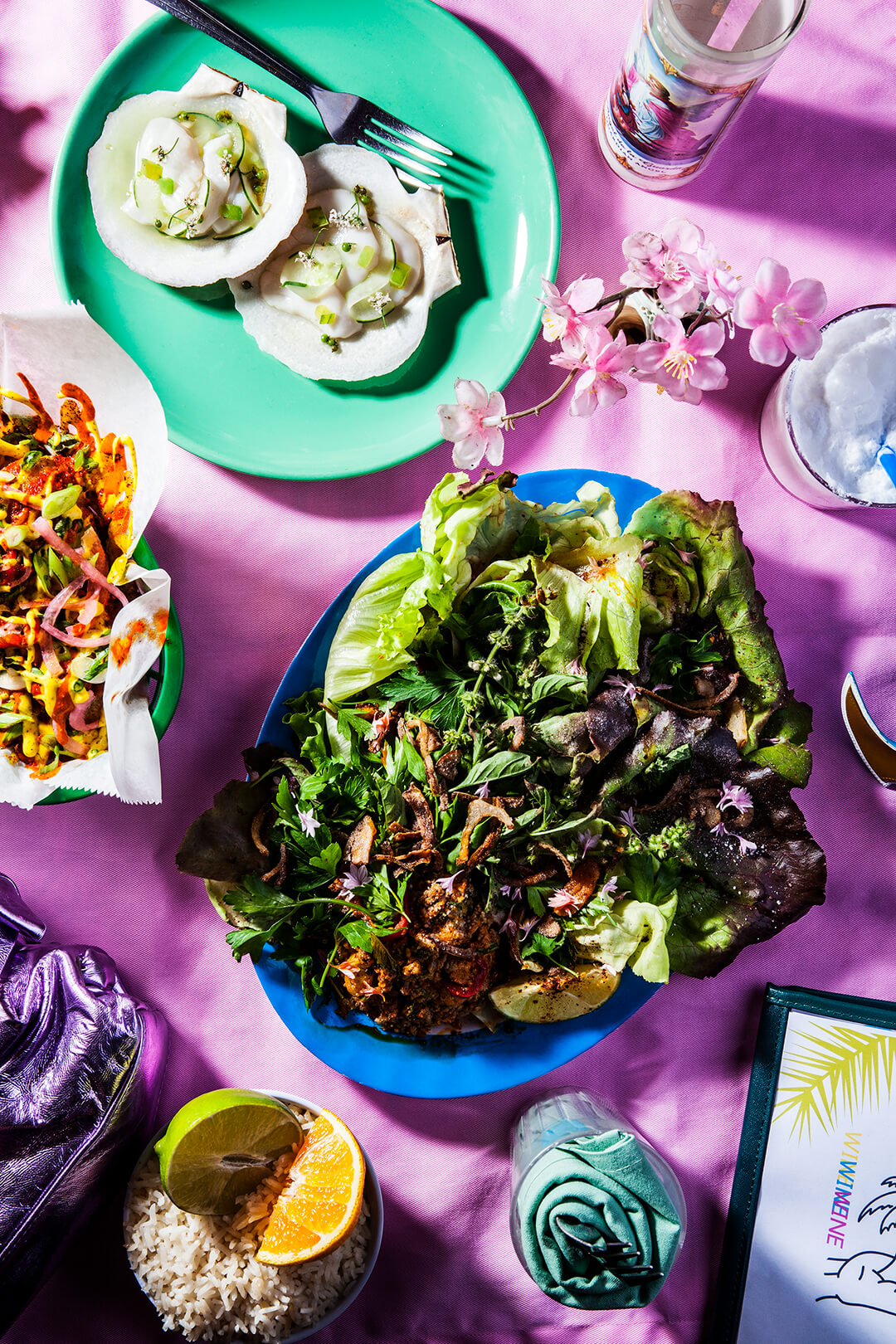 The aesthetic of the restaurant bucks the more common ‘rustic-modern’ trend with a cheerful, tropical vibe. It’s the space where all their creative talents coalesce, or as they describe it: ‘an ongoing restaurant/installation/performance project’.

How do you combine your art practice with the restaurant?

CP: It’s not isolated in the way it was. Both of those things coalesce within the space of the restaurant. It’s always changing – whether it’s the wall colour, the events we do or the dishes we put out. We do a lot of collaborations with other artists and create events together. We do food but we also have a hand in the space, lighting and music. It’s another expansion of our studio practice.

HB: In a way the restaurant is our studio. We’re constantly churning out ideas that we then take onto other projects. We often call it our think tank.

CP: Also, a lot of our employees have other projects going on. We love that. It’s all part of what we want. There’s a collaborative effort, it makes us a richer place.

HB: We try as much as possible to allow people to express themselves through this platform that we have created. I think other businesses stifle that in a certain way and suffer because of it. It’s a lot harder to find good committed employees around here.

This interview has been shortened for length.